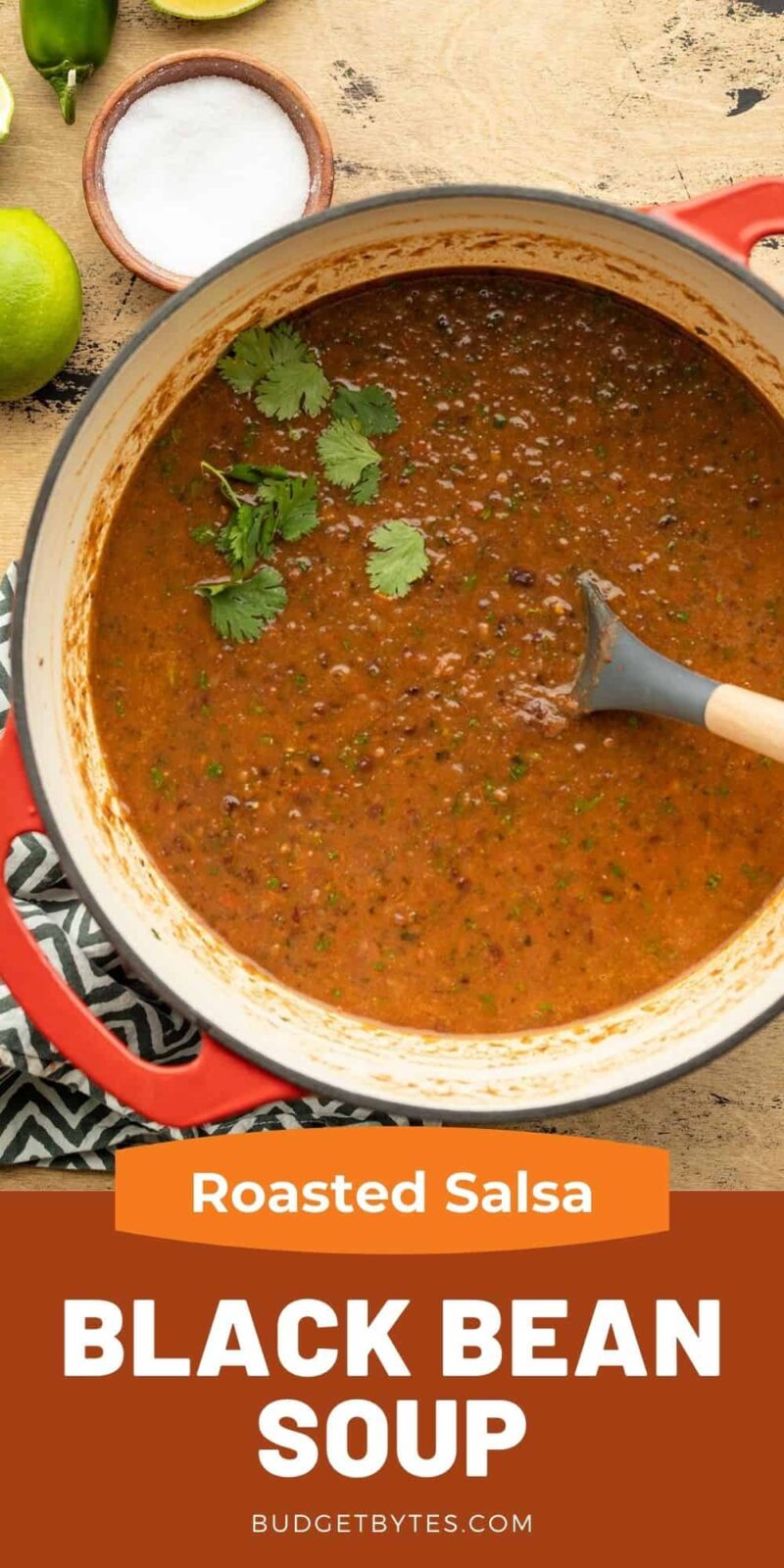 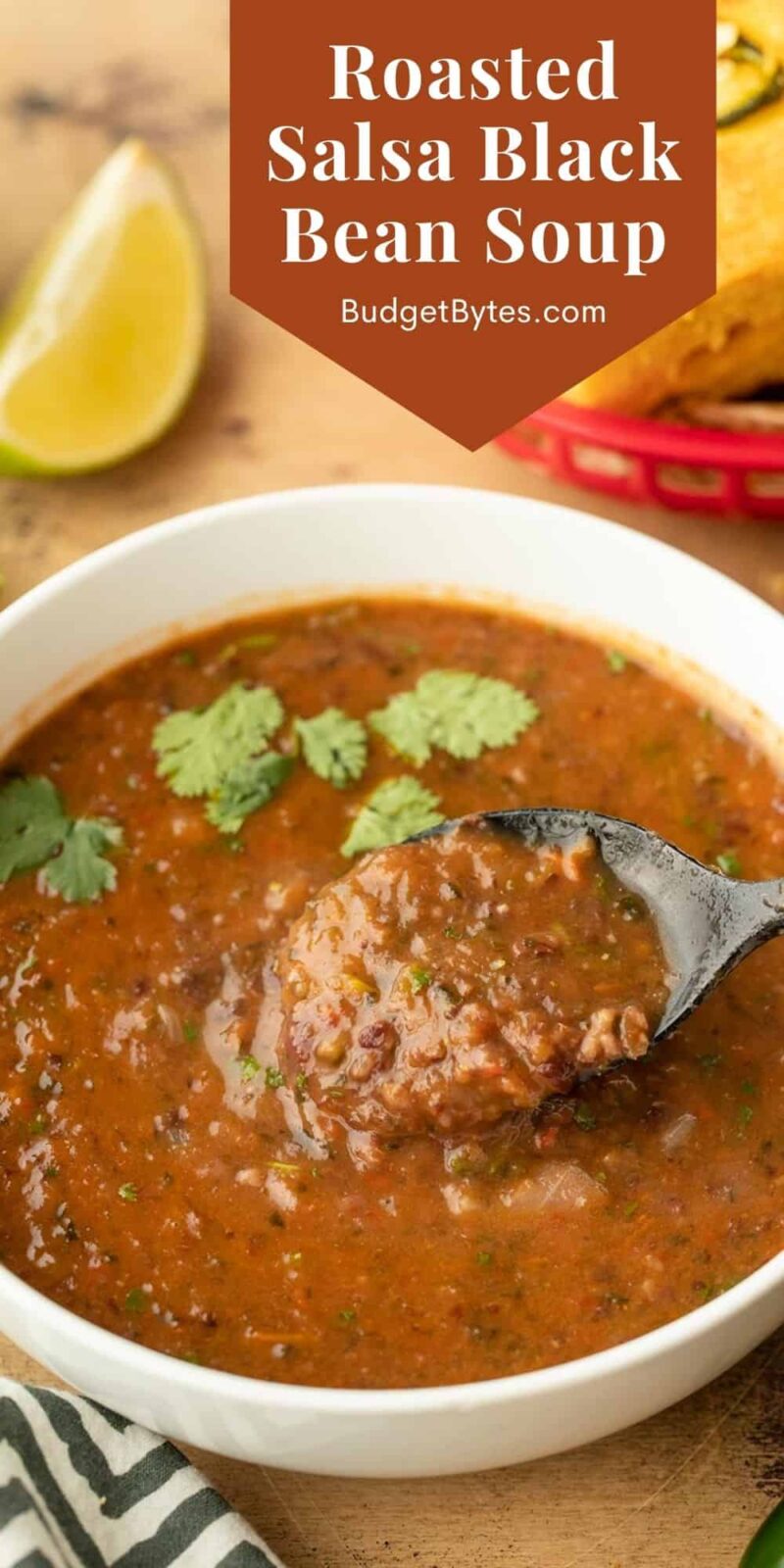 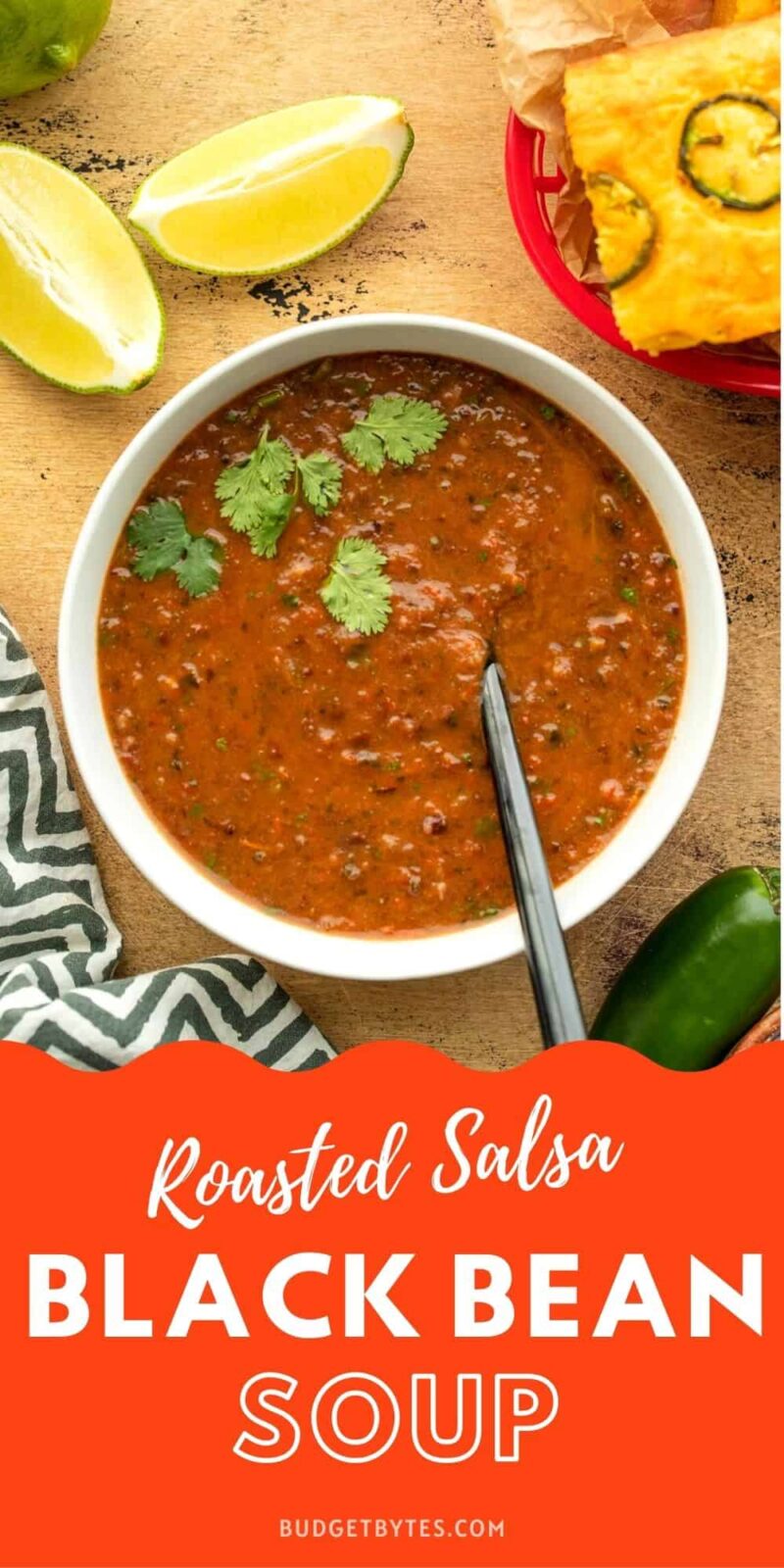 I’ll just admit it. I love salsa so much that sometimes I wish I could eat it with a spoon as if it were soup. So that’s basically what I did. I made a homemade salsa with roasted vegetables, combined it with black beans to make the soup more filling, and added some fresh cilantro and lime to freshen things up. This soup is colorful, flavorful, and is giving me all the salsa vibes. I wouldn’t even say no to crushing some tortilla chips on top of the bowl!

This soup is based off of my Fire Roasted Salsa recipe, which is one of my absolute favorite salsa recipes. It’s made with fresh vegetables that are oven roasted until they’re all sweet and caramelized on the edges. The flavor is absolutely amazing!

Add More to Your Soup

You know I love flexible recipes, and this black bean and roasted salsa soup is no exception. You can have tons of fun by adding ingredients or toppings to make it your own. Here are some ideas:

What to Serve with Roasted Salsa Soup

I served my soup as a main with some Cheddar Jalapeño Cornbread on the side, but this soup would also be great served as a side with Chipotle Lime Chicken and Rice, Green Chile Chicken Enchiladas, or Black Bean and Avocado Enchiladas. 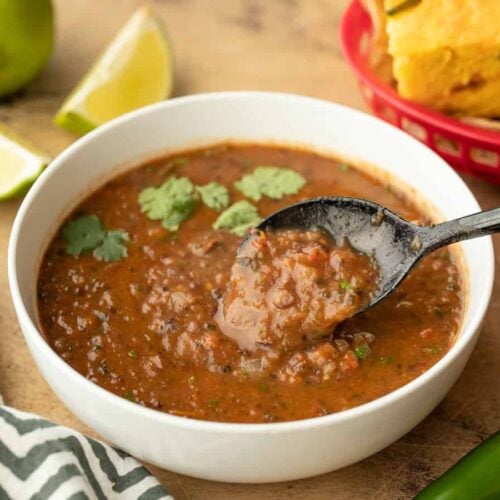 Preheat the oven to 400ºF. Slice 6 Roma tomatoes in half. Cut one yellow onion into chunks. Cut one red bell pepper and one jalapeño in half, then scrape the seeds out. Peel four cloves of garlic. Leave 2 poblano peppers whole. Add all the vegetables to a large baking sheet, then drizzle 2 Tbsp of your favorite cooking oil over top. Toss until the vegetables are well coated in oil.

Roast the vegetables in the preheated oven for about 45 minutes, or until they’re well browned on the edges, stirring once halfway through.

Remove the poblano peppers from the baking sheet and allow them to cool slightly. The skin should be blistered and easily peeled from the flesh. Peel the poblanos, then open them up and scrape out the seeds.

Add the roasted vegetables and about ½ cup fresh cilantro to a food processor or blender.

Pulse the vegetables until they’re about half puréed (I like to leave it just slightly chunky so you can see all the separate colors). Pour the vegetables into a large soup pot.

Drain two cans of black beans and add them to the food processor with one cup of vegetable broth. Puré until mostly smooth.

Pour the beans into the soup pot with the vegetables and add the remaining 2 cups vegetable broth and ½ tsp cumin. Stir until everything is combined.

Bring the soup up to a simmer over medium heat. Allow the soup to simmer for about 10 minutes, then season with salt and lime juice. I added ¾ tsp salt and 1 Tbsp lime juice, but start small and add according to your taste buds.