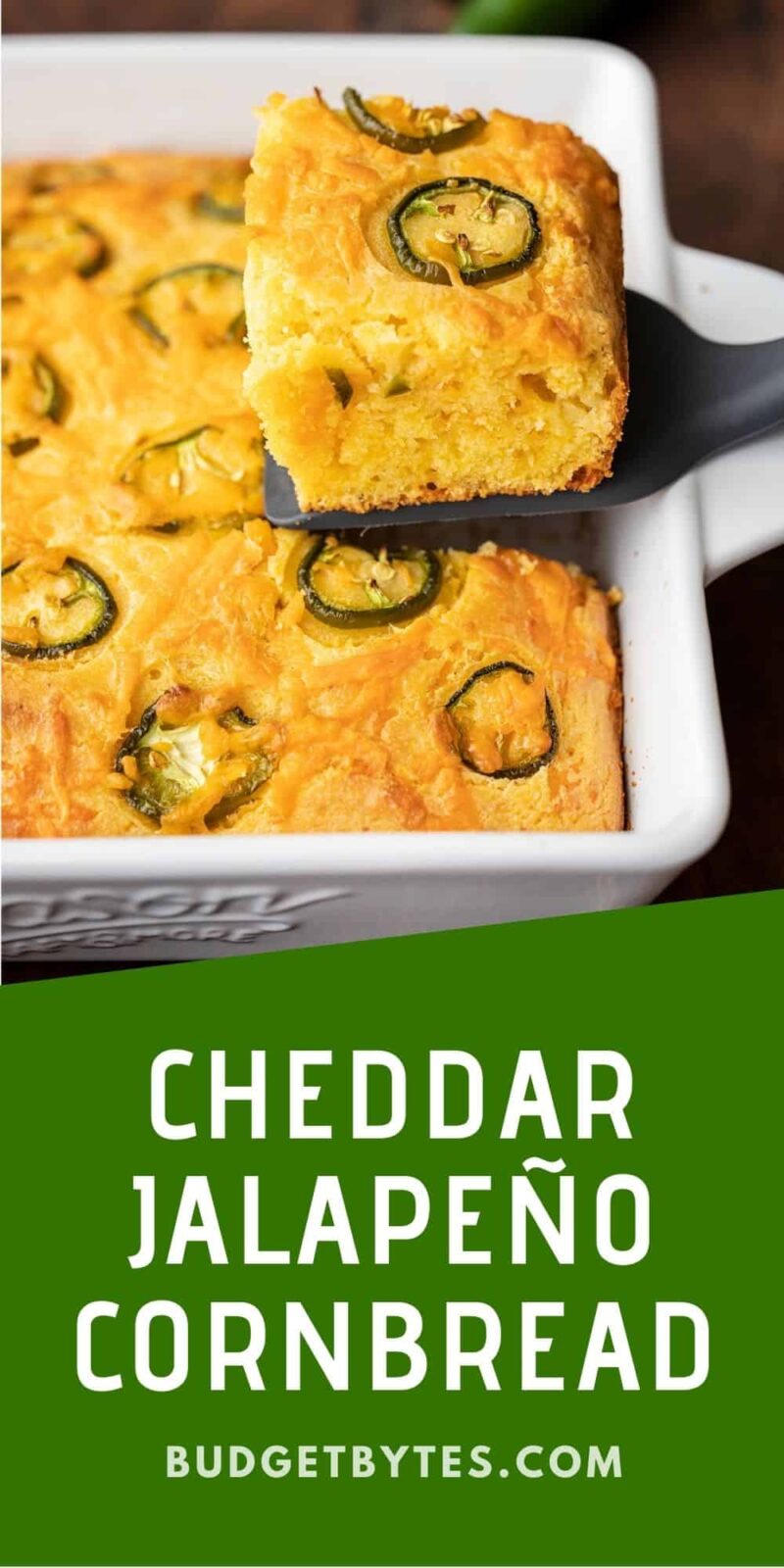 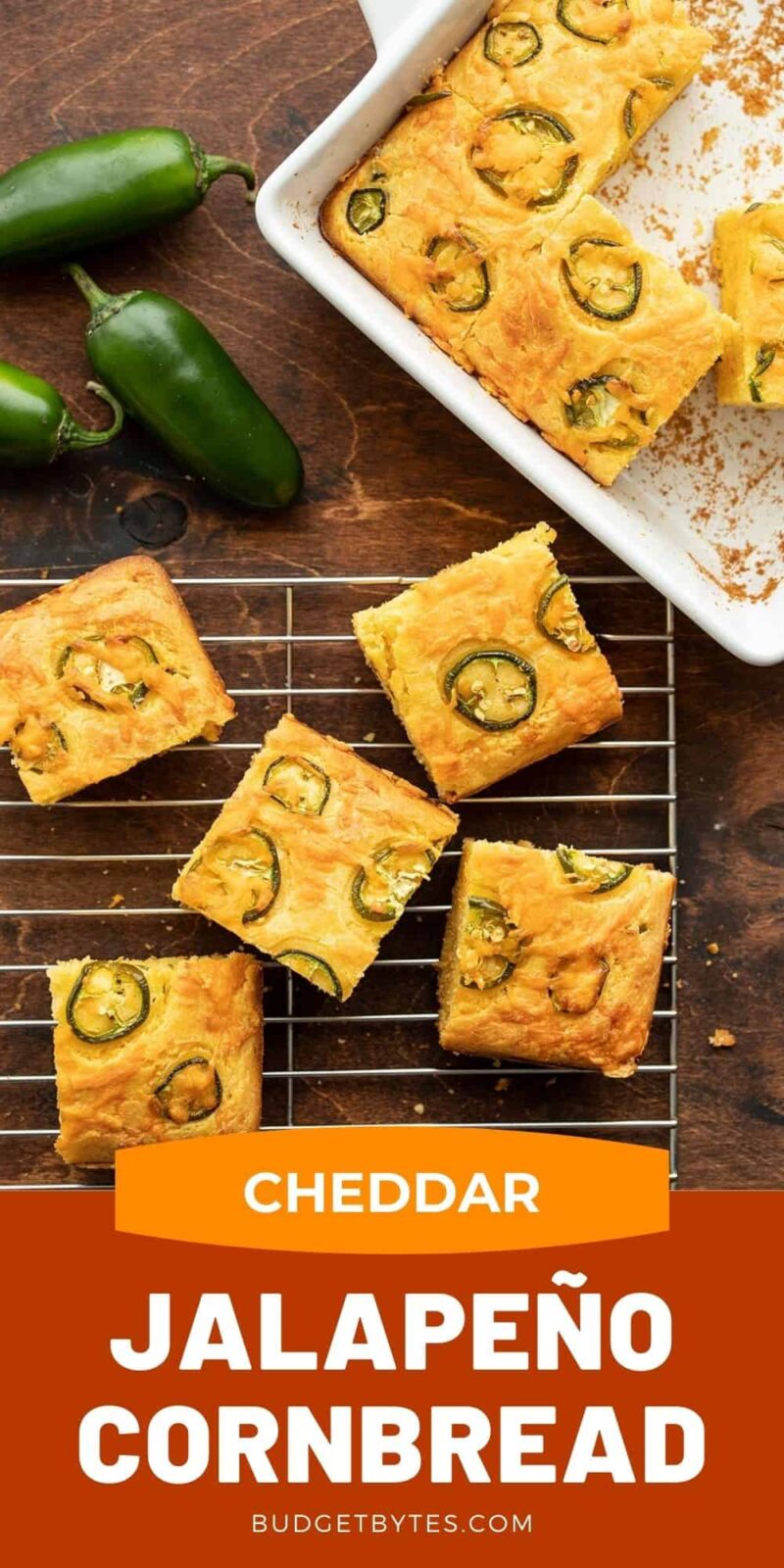 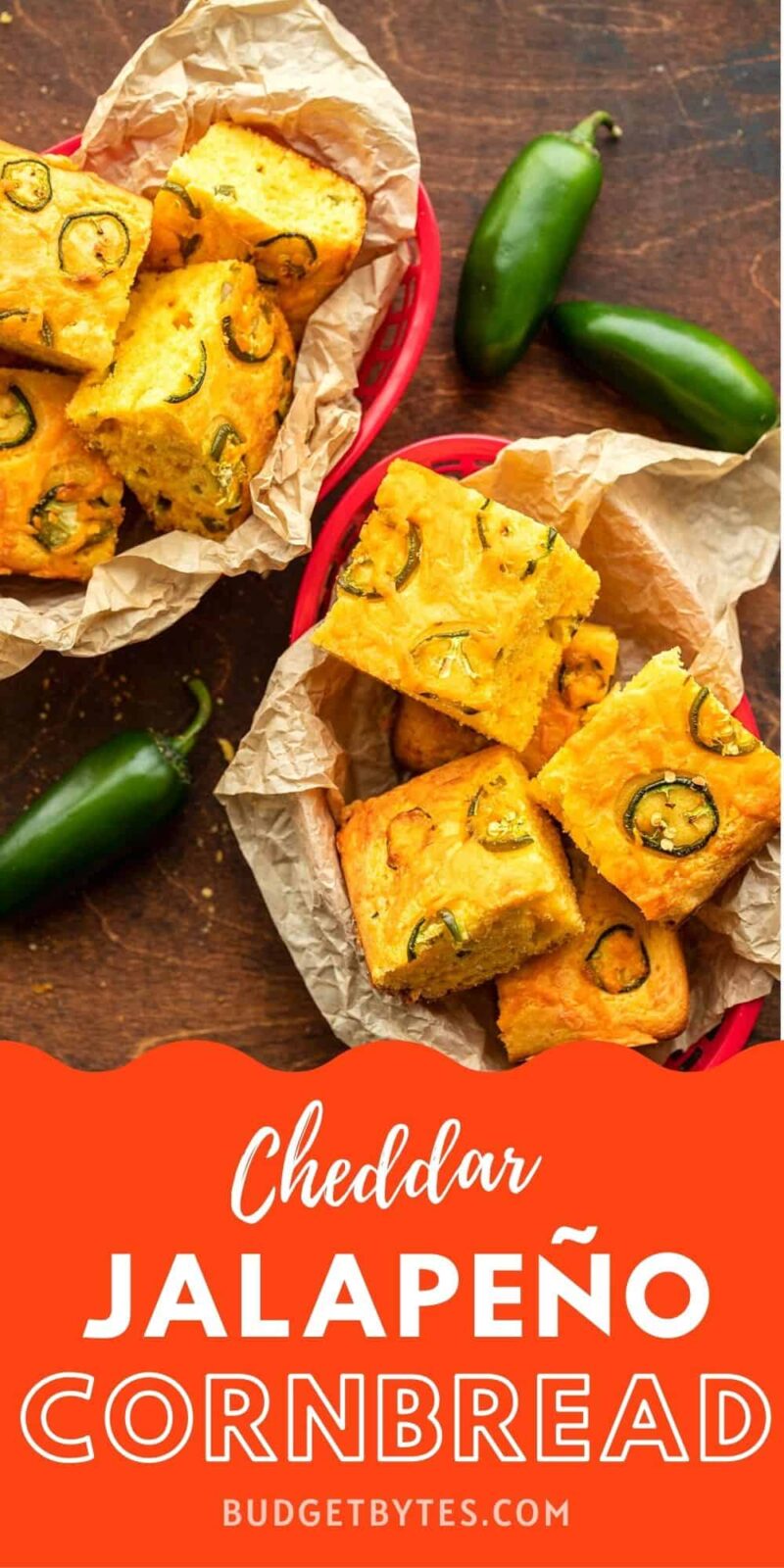 As if cornbread wasn’t delicious enough on its own, I went ahead and stirred in a pile of shredded cheddar cheese and chopped jalapeño. Because why not? And since this Jalapeño Cheddar Cornbread is on the spicy side, I decided to go with a richer cornbread batter that includes sour cream and an extra egg to kind of balance the heat. The result is rich, cheesy, moist, and ✨spicy✨.

How Spicy Is This Cornbread?

It’s pretty spicy. Despite scraping the seeds out of the jalapeño that is mixed into the batter, the heat still seems to permeate the cornbread pretty well. If you’re not into heat, you can certainly just make this a plain cheddar cornbread or stir in some mild diced green chiles in place of the jalapeño.

What Kind of Baking Dish Should I Usse?

I used a ceramic baking dish, but I’ve also tested the recipe using a glass baking dish, and they both worked great. An 8×8-inch square dish is probably the best size. You could also bake this in a 10-inch cast iron skillet, although you may want to preheat it just a bit before adding the batter.

Can I Make Them Jalapeño Cheddar Cornbread Muffins?

Yes, just divide the batter equally between about ten wells of a muffin tin and bake at the same temperature. Because the muffins are smaller and have more surface area exposed to the heat, the baking time will be shorter. Just keep an eye on the muffins starting at about 20 minutes, and let them continue to bake until puffed in the center and golden brown around the edges.

How to Store Jalapeño Cheddar Cornbread

Allow the cornbread to cool completely to room temperature and then store in an air-tight container in the refrigerator for up to 4-5 days. Or, you can wrap it tightly in plastic, place it in a freezer bag, and freeze it for a few months. To thaw, simply let the cornbread sit at room temperature for about 15 minutes, or microwave for 30 seconds or so.

Don’t forget to make a pot of homemade chili to go with your cornbread! :)

4.34 from 6 votes
This Jalapeño Cheddar Cornbread is rich, moist, and spicy. It's perfect for pairing with your favorite soup or chili.
Author: Beth – Budget Bytes 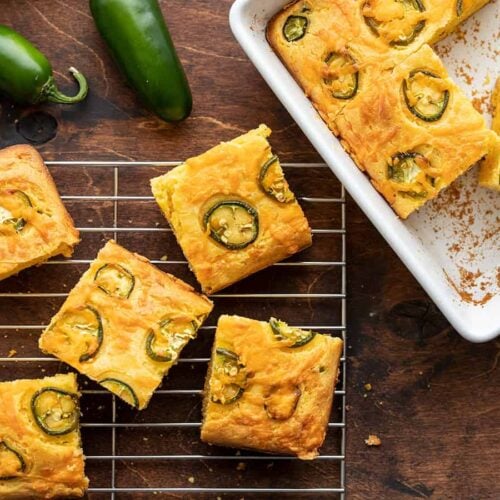 How to Make Jalapeño Cheddar Cornbread – Step by Step Photos

Preheat the oven to 400ºF and use about 1 tsp butter to grease the inside of an 8×8-inch baking dish. In a large bowl, combine 1 cup cornmeal, 1 cup all-purpose flour, 2 Tbsp sugar, 3 tsp baking powder, and ¾ tsp salt.

Remove the seeds from one jalapeño and then finely dice the pepper. Slice the second jalapeño into rounds. The diced jalapeño will go into the batter and the rounds will be used as a topping.

Add the diced jalapeño and most of your 4oz. shredded cheddar cheese to the bowl with the dry ingredients (save about ¼ of the cheese to use as a topping). Stir the jalapeño and cheddar into the flour mixture.

Stir until everything is moist. Avoid over stirring. It’s okay if it’s a little lumpy.

Spread the cornbread batter into an 8×8-inch baking dish, then top with the sliced jalapeños. Finish by topping with the remaining shredded cheddar cheese.

Bake the cornbread in the preheated 400ºF oven for about 35 minutes or until the center is puffed and it’s golden brown around the edges.

Slice the cornbread into nine pieces and serve warm with your favorite soup or chili!!