It’s almost Friday, so I’m going to throw a quick little pizza recipe at ya! BBQ Chicken Pizza is such a classic with its sweet, tangy, and salty BBQ sauce, bits of juicy chicken, creamy cheese, and savory onions. But, after making pizzas for a living for a couple of years, I learned that there are a so many other fun things you can throw on top of a BBQ Chicken Pizza! So keep reading to grab the “classic” recipe below, plus some of my other “fun” toppings that go really well with these BBQ flavors. 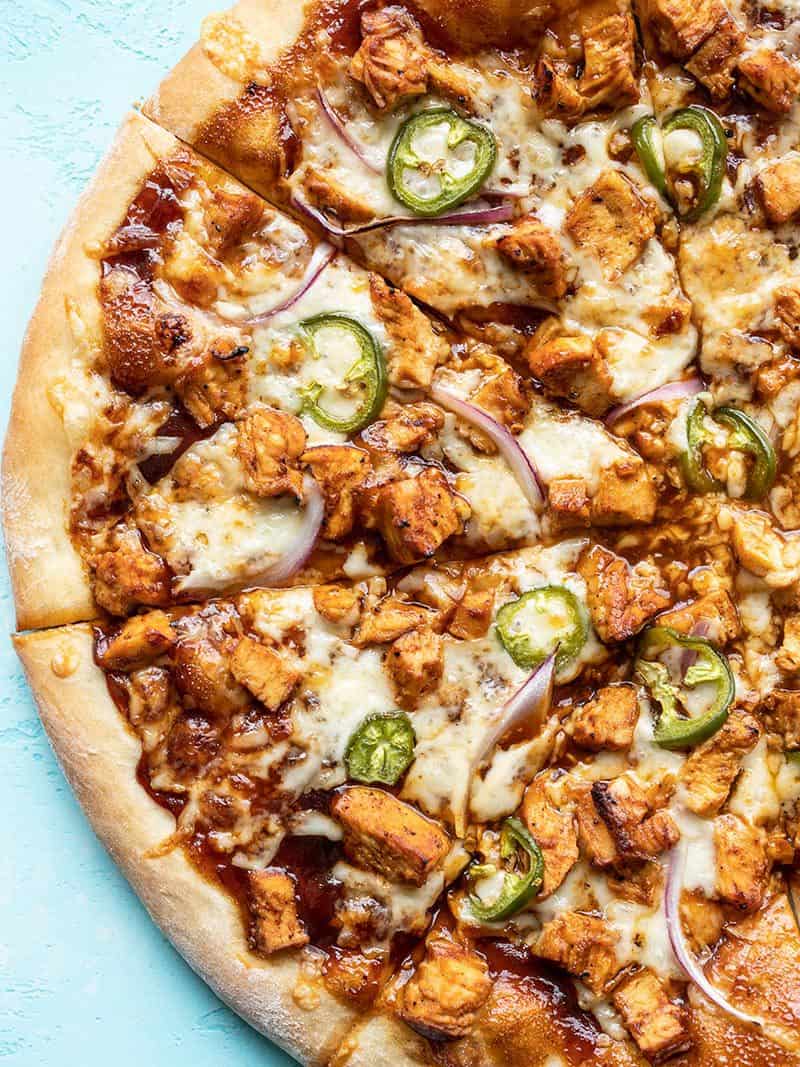 What Kind of Pizza Dough Should I Use?

You can literally use any type of pizza dough or crust you like for BBQ Chicken Pizza. I used my classic Homemade Pizza Dough, but it would also go well on a Thin and Crispy Pizza Crust, on French Bread, a baked tortilla, or your favorite store bought gluten-free or cauliflower crust. The toppings listed below will be enough for a 14-16″ pizza crust.

Can I Substitute the Chicken?

Sure! If you’re not into chicken, you can substitute a can of black beans (mixed with the spices and sauce listed for the chicken), or even shrimp.

If you like chicken, but don’t feel like cooking it from scratch, you can use pre-cooked chicken. If using a rotisserie chicken, simply chop it up and combine it with BBQ sauce. If you’re using canned chicken breast, just drain the chicken and gently fold with the BBQ sauce.

What is Your Favorite BBQ Sauce?

I’m not too picky with BBQ Sauce, but I do tend to like Sweet Baby Ray’s brand. Personally, I do prefer smoky BBQ sauces to some of the sweeter sauces. Today I had this Hickory Smoke BBQ Sauce from Kroger. I think it would be fun to try a spicier BBQ sauce, or even a pineapple flavored BBQ sauce.

What Else Can You Put on a BBQ Chicken Pizza?

Here’s where it gets fun. Here are some of the other toppings I’ve enjoyed on my BBQ Chicken Pizzas over the years: 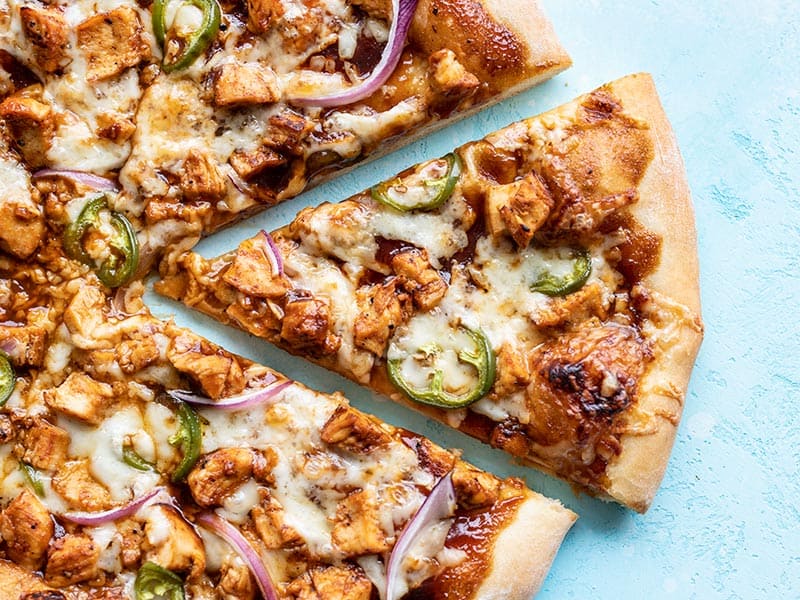 5 from 7 votes
Get the classic BBQ Chicken Pizza recipe, plus other fun toppings you can add that pair well with BBQ and make your pizza even more flavorful.
Author: Beth - Budget Bytes 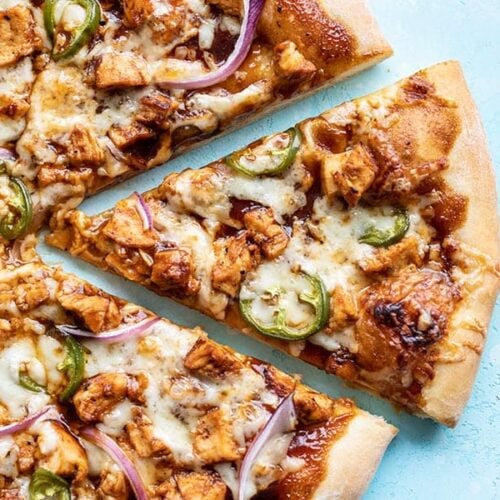 *Instead of cooking fresh chicken, you can simply season pre-cooked chicken like rotisserie chicken or canned chicken breast. 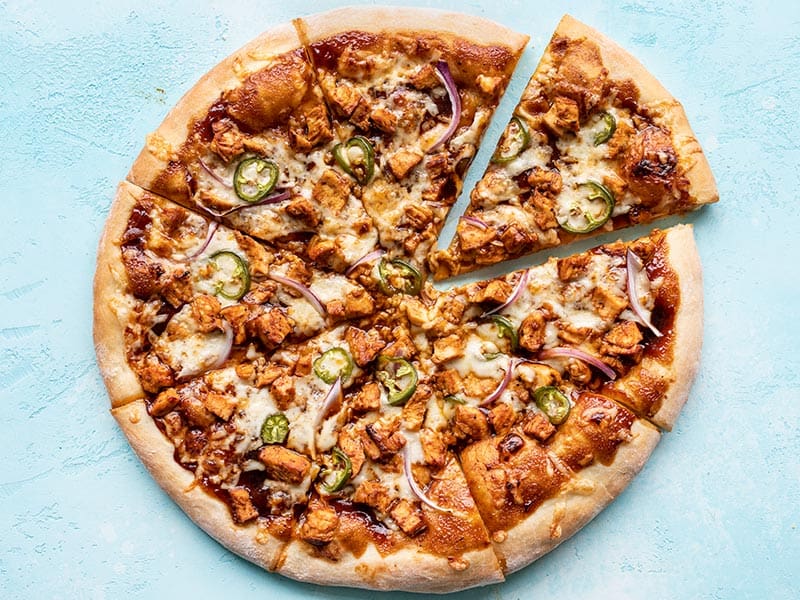 How to Make BBQ Chicken Pizza – Step by Step Photos 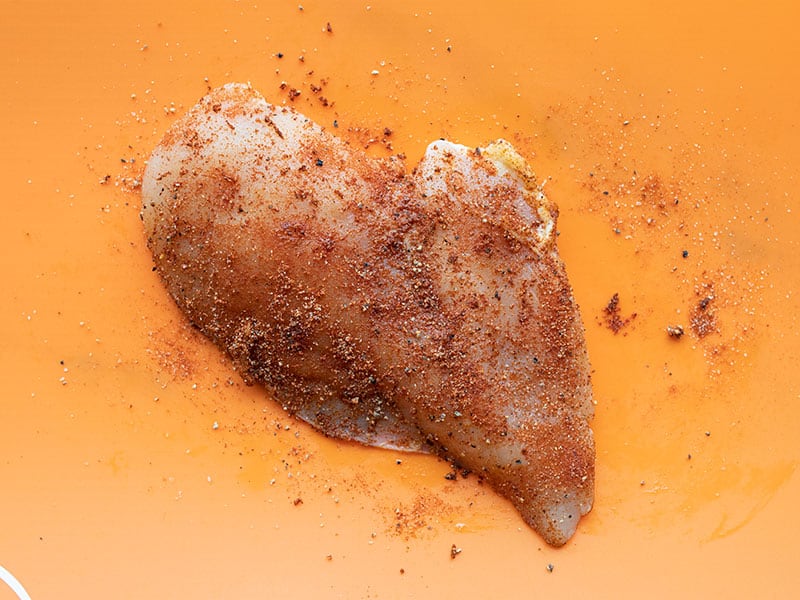 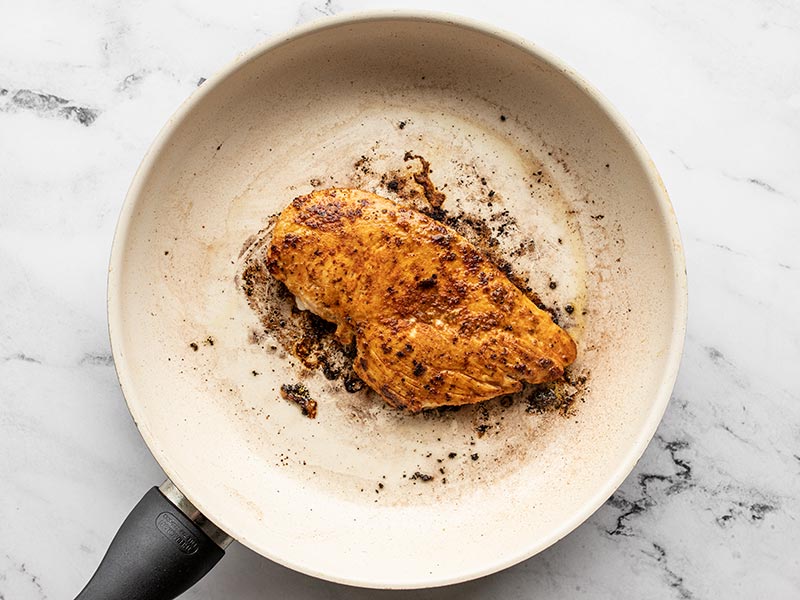 Heat ½ Tbsp cooking oil in a skillet over medium. Once hot, add the seasoned chicken, and cook for about 5-7 minutes on each side, or until cooked through (internal temperature of 165ºF). You could also opt to make a batch of Slow Cooker BBQ Chicken and use some of that to top your pizza. 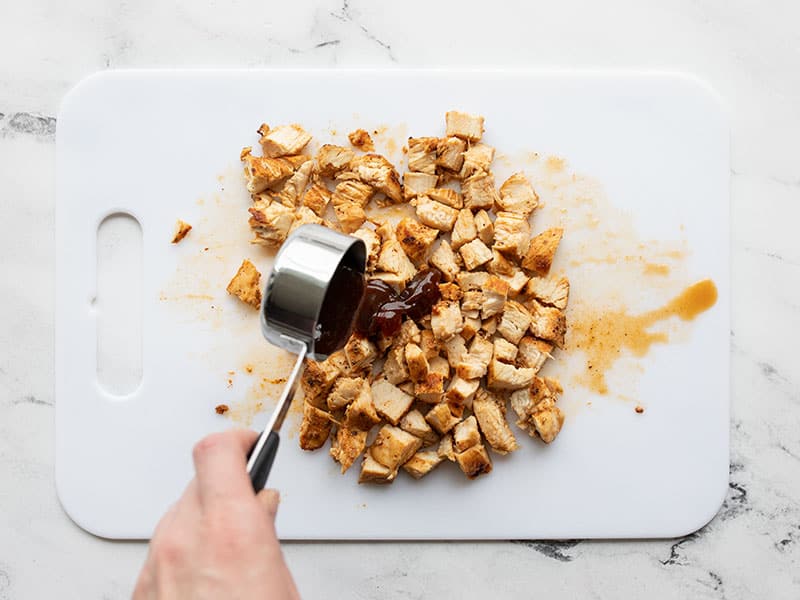 Transfer the cooked chicken to a clean cutting board. Let the chicken cool for a few minutes, then chop into small pieces. Add ¼ cup BBQ sauce and stir to coat the chicken in the sauce. 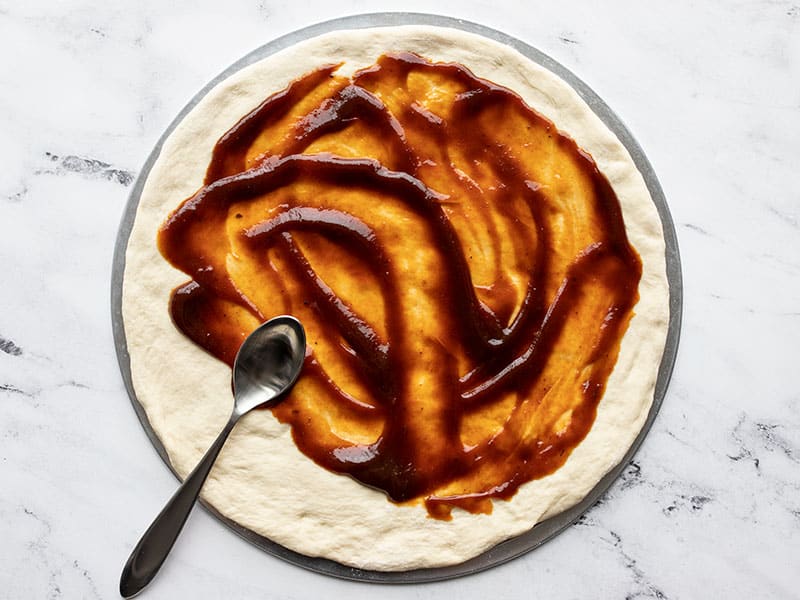 Preheat the oven to 450ºF. Place a prepared pizza dough/crust on a pizza pan, then spread ½ cup BBQ sauce over the surface of the dough. 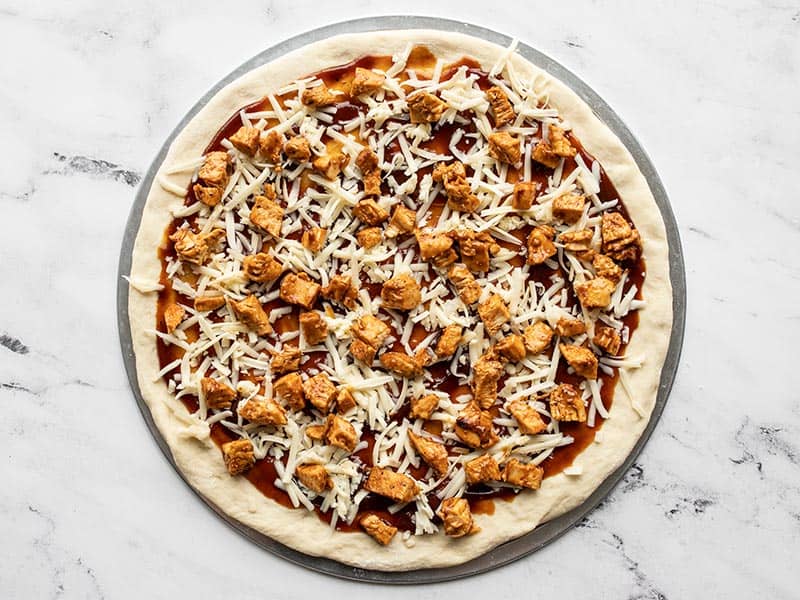 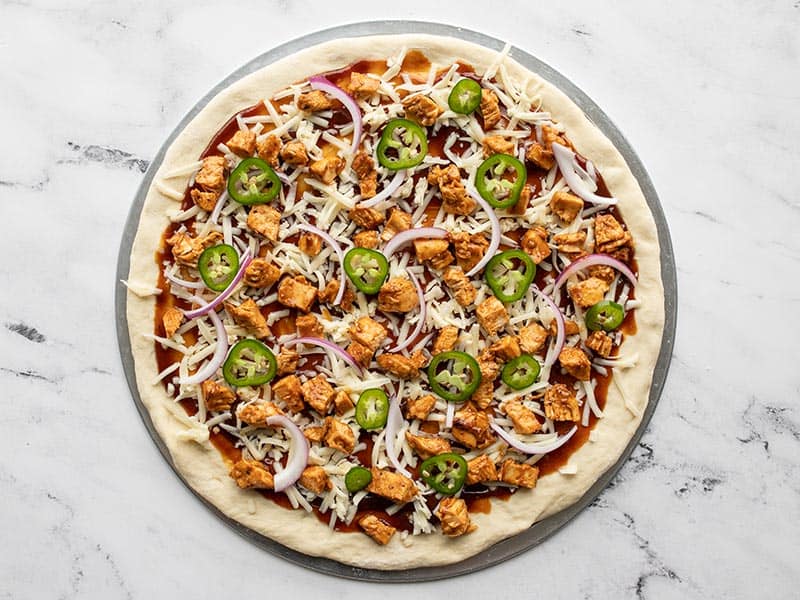 Finally, add sliced red onion and one sliced jalapeño to the pizza. 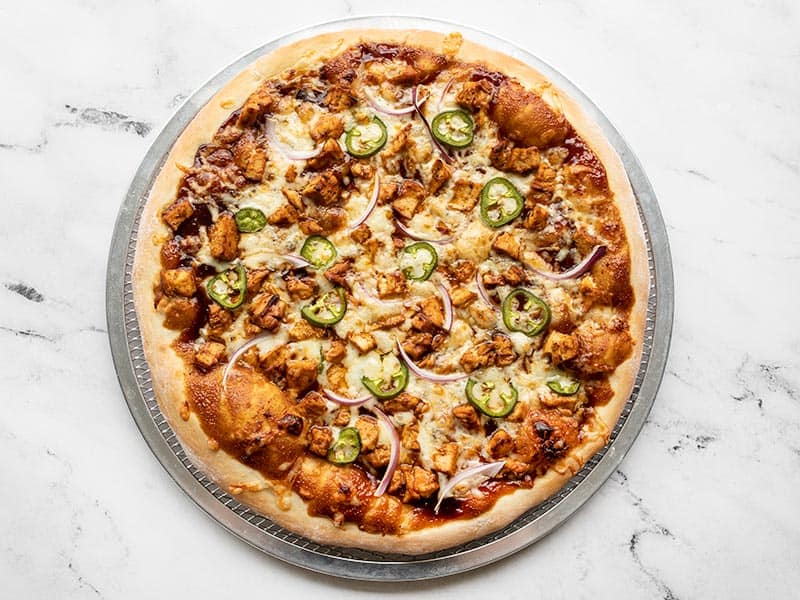 Bake the BBQ Chicken Pizza in the preheated oven for 10-12 minutes, or until the crust and cheese are golden brown.

Slice into 8 pieces and enjoy!!