I’m an equal opportunity pizza lover. I love fancy hand tossed pizza as much as I love a $3 frozen pizza. I love thick pizza crust, thin and crispy pizza crust, and everything in between. And I love trying to make them all at home.

My love for thin crust has grown over the past few years and I’ve been on the hunt for a good thin and crispy pizza crust recipe. I’ve tried a few with less than stellar results, but when thekitchn.com claimed that their recipe was the result of “years of very meticulous testing,” I couldn’t help but trust their word. I tried their recipe with one small variation, the use of more yeast (one standard 0.25 oz. packet) and a little sugar to help super charge the yeast. I was very happy with the results! This crust is crispy, but not dense (thank you, yeast), and has just enough “give” to keep you from thinking you’re eating off of a saltine cracker. The fact that this Thin and Crispy Pizza Crust doesn’t require any time to rise may elevate it to my new #1 favorite position. Because when you want pizza, you want it NOW, ammiright? 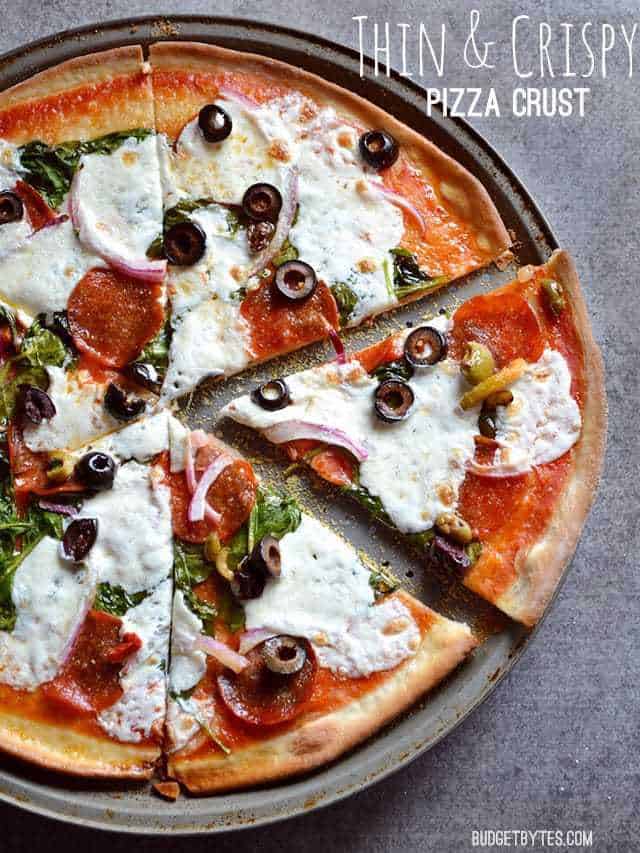 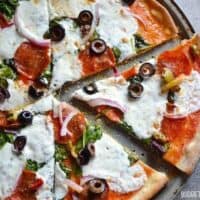 This awesomely thin and crispy pizza crust requires only a few ingredients and NO RISE TIME. Have pizza on the table in about the time it takes to order out
Total Cost: $0.59 recipe / $0.30 per pizza
Author: Adapted from thekitchen.com
Prep Time: 15 mins
Cook Time: 10 mins
Total Time: 25 mins
Servings: 2 12-inch pizzas 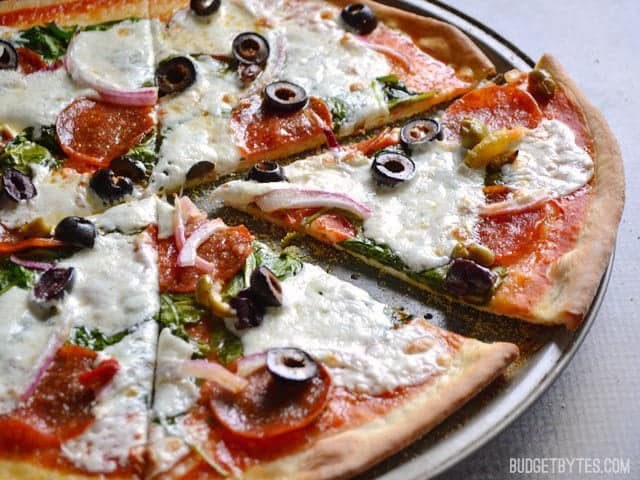 My pizza is topped with fresh mozzarella, a few vegetables from the salad bar, and leftover pepperoni from my Three Pepper Pasta with Crispy Pepperoni. It’s important not to choose toppings that are very wet when working with a thin crust.

See this Recipe in Action: 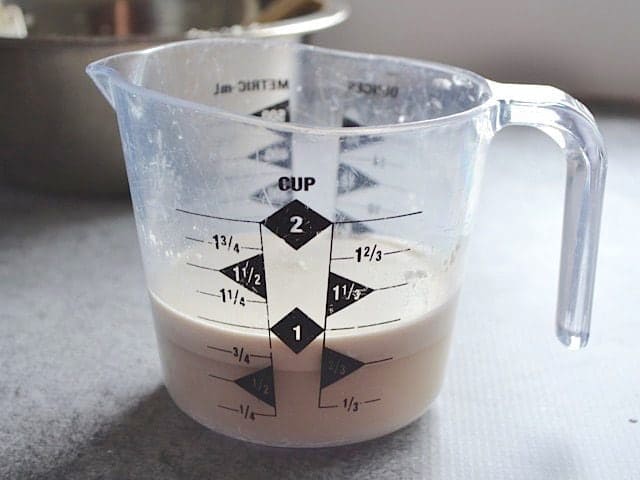 Begin by preheating your oven to 500 degrees, or as close to 500 as you can get it. It may take a while to get up that high, so start preheating as soon as possible. Also, move your oven rack to the highest position because that’s where the air will be hottest. Hotter is better when it comes to pizza.

Next, dissolve 1/2 tsp sugar and 2 tsp (or one 0.25oz. packet) of yeast into 3/4 cup warm water. Let that sit until it forms a thick layer of foam like the photo above (that should take about 5 minutes). 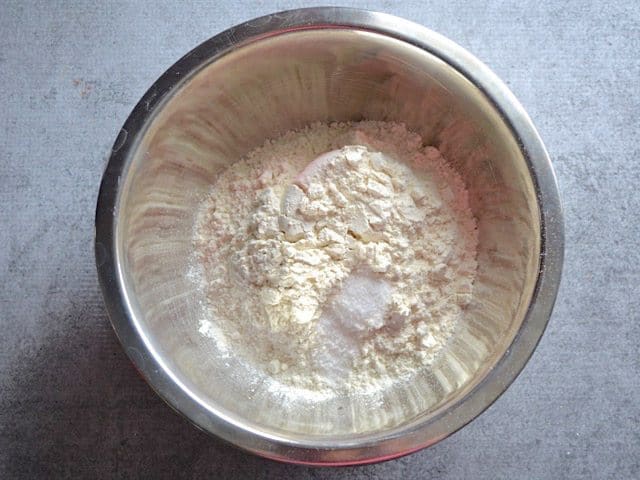 While you’re waiting on the yeast, combine 1 cup all-purpose flour and 1 tsp salt in a large bowl. Make sure to stir them until the salt is evenly distributed throughout (or as best you can tell). 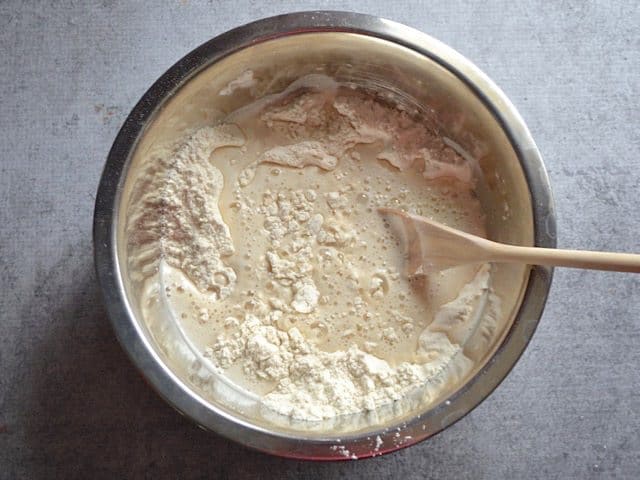 Pour the foamy yeast water into the bowl of flour and stir until fairly smooth. 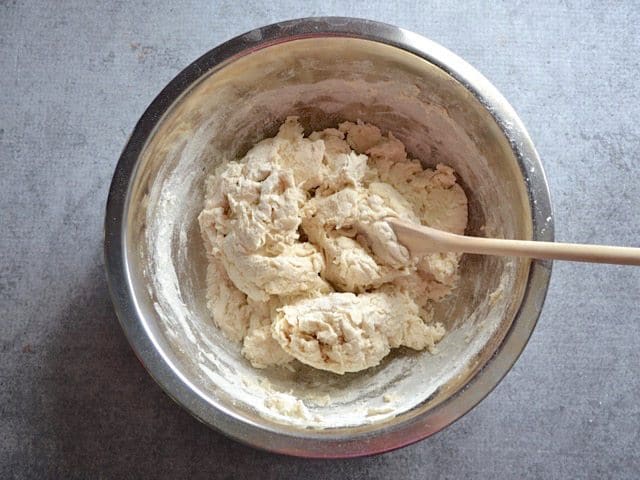 Stir in an additional 1/2 cup flour, then turn the shaggy dough out onto a floured surface and knead for about 5 minutes. Slowly add up to 1/2 cup more flour as you knead. Add the flour slowly so that the dough does not become dry and stiff. It should remain soft and supple. 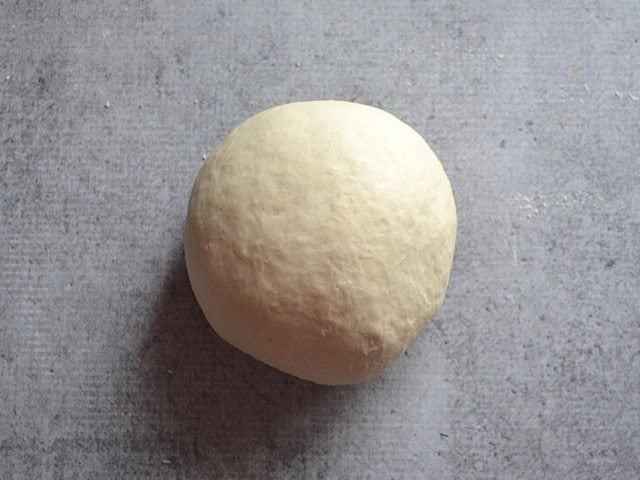 Let the dough rest for at least five minutes. This helps the gluten relax a bit, which will make it easier to roll out. 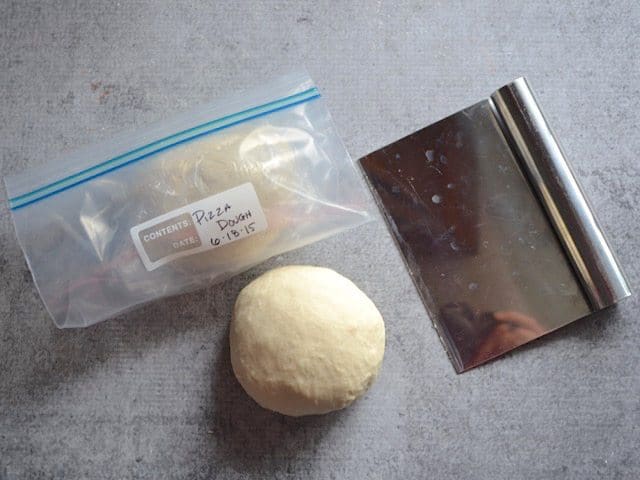 Divide the dough into two pieces and form each into a smooth ball. If you’re not going to make two pizzas at this time, wrap one in plastic and store it in the fridge for a couple of days or in the freezer for up to a few months. 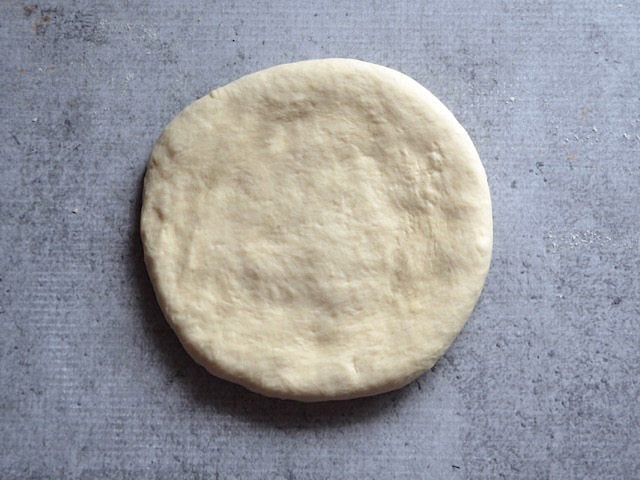 Flatten the ball of dough into a circular disc with your hands. People always ask me how I get my pizzas so round and the answer is (in addition to having YEARS of pizza making experience) this first “pat down” step. This is where the shape begins. If it’s not a circle before you start rolling, good luck making it into one later! :P 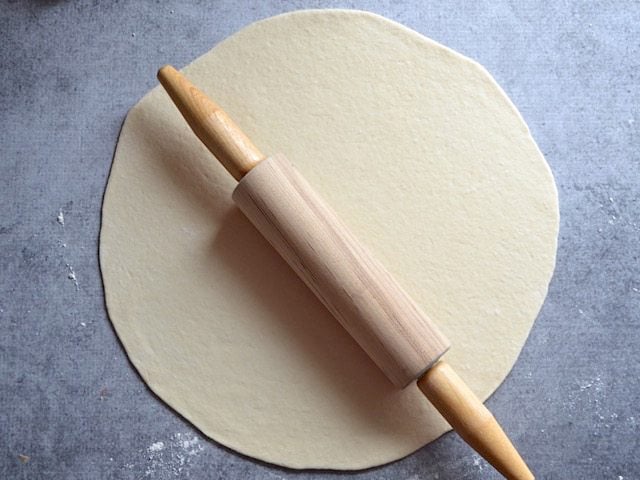 Use a rolling pin to roll the dough out into a 12 inch circle, about 1/8 inch thick. Using a rolling pin is very important to making the crust thin and crispy. It flattens out the tiny air pockets and kind of compresses everything down. If you simply stretch it with your hands (like hand tossed crust), it remains more pliable and will become more fluffy when baked. 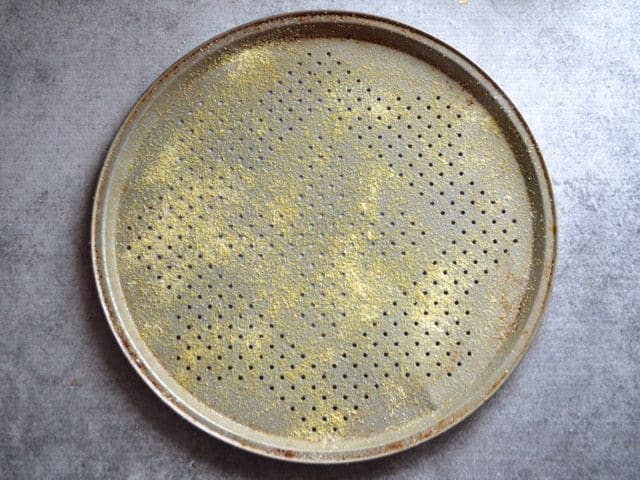 Prepare whatever pizza pan you prefer to use. I highly suggest using a perforated pan if you don’t have a pizza stone because it allows air to get up under the crust to make it crispy. I like to use a thin layer of non-stick spray and then a generous sprinkle of cornmeal, but that’s just my preference. 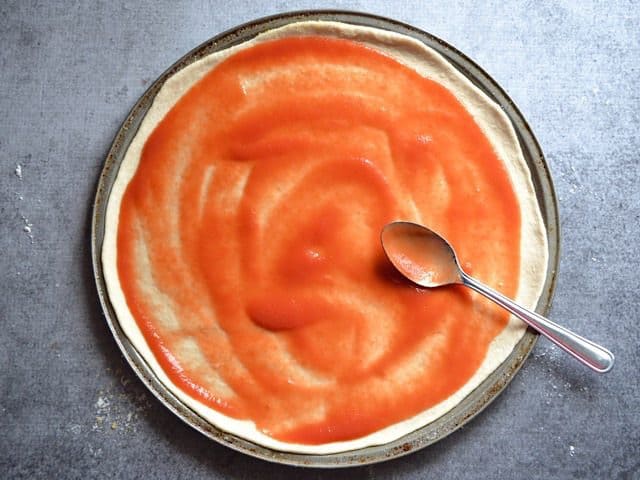 Carefully transfer the dough to the pizza pan. Folding it in half before picking it up will help it maintain its shape without further stretching. Then once it’s on the pan, you simply unfold the dough. Spread a thin layer of your favorite sauce over the crust. 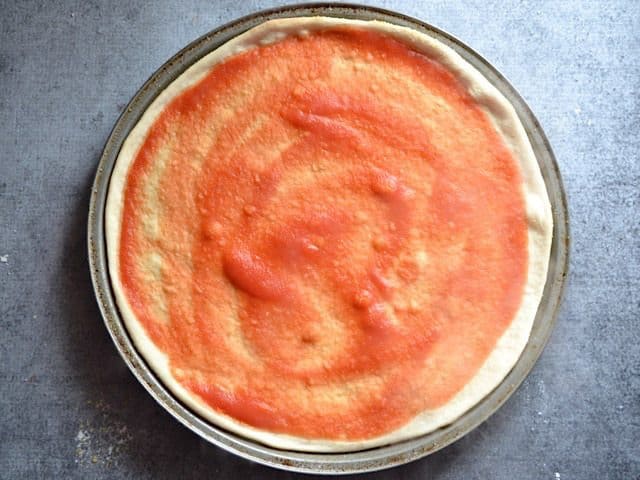 Bake the crust in the fully preheated oven for five minutes. This helps dry it out and prepares it for it’s final crispy form. If you top it with everything first, it probably won’t get enough heat and air exposure to fully crisp, so partially bake the crust and sauce first. 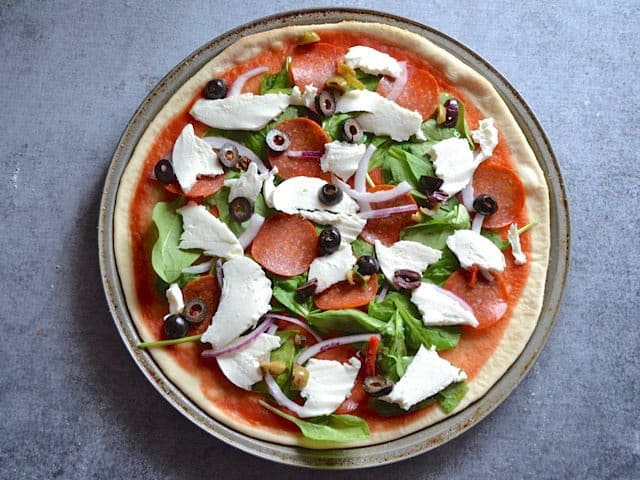 After baking for five minutes, add the rest of your toppings. Remember not to use anything too wet or heavy (like fresh tomatoes) because you don’t want lakes to form on the pizza. 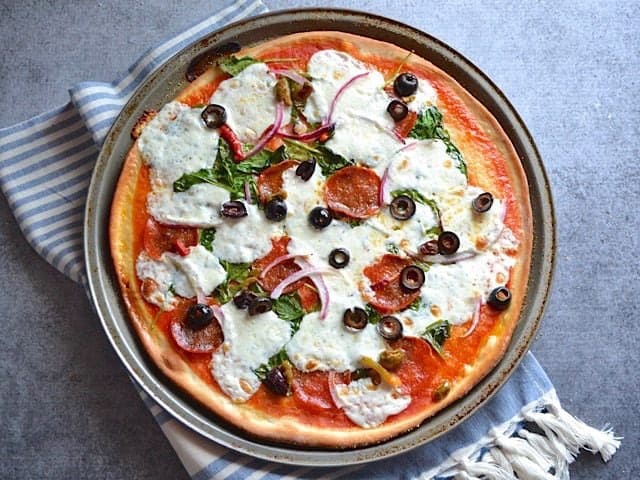 Pop the pizza back into the oven for 7-10  minutes more, or until the crust is nicely browned and the cheese is bubbly. When cooking at such a high temperature, the time will vary quite a bit from oven to oven, so just keep an eye on it and use those visual cues to tell you when it’s done. 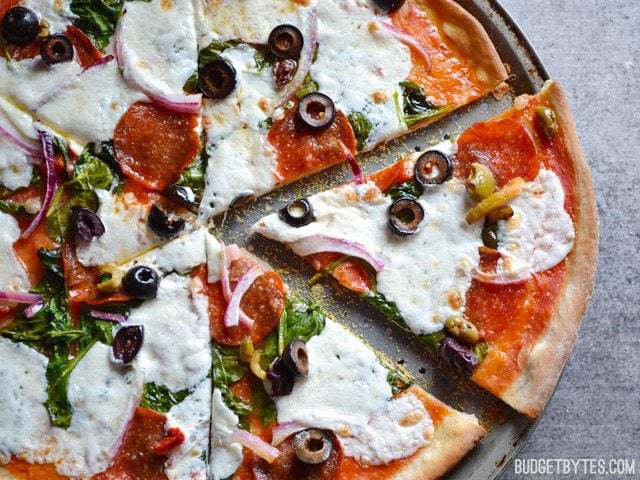 The edges have a nice crispy texture and the interior has a nice crunch on the bottom. Thin and crispy pizza crust heaven! 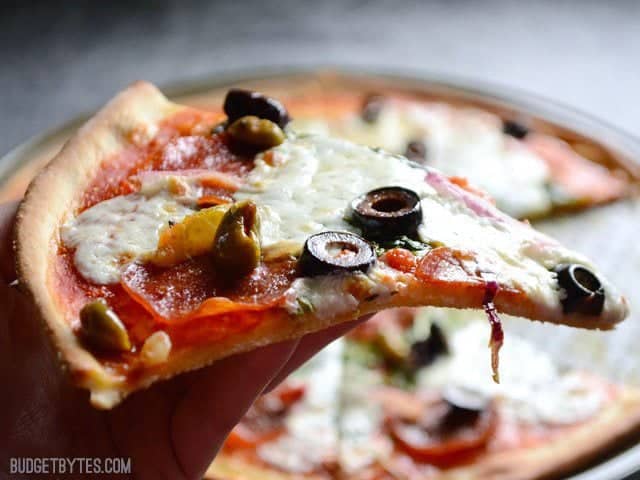 Super thin, but strong enough to hold up to toppings!