Can’t stop, won’t stop with the yummy soups over here! Soup is easy, soup is filling, soup is an easy way to pack some more vegetables into your day, and soup (usually) freezes well. This week I’m bringing you this awesome Vegetable Barley Soup that is packed with tons of color, texture, and flavor. And thanks to a healthy dose of barley, it’s also super filling. I’m so glad this recipe makes a huge batch because I’m going to be living off the frozen leftovers of this soup for the rest of winter!! 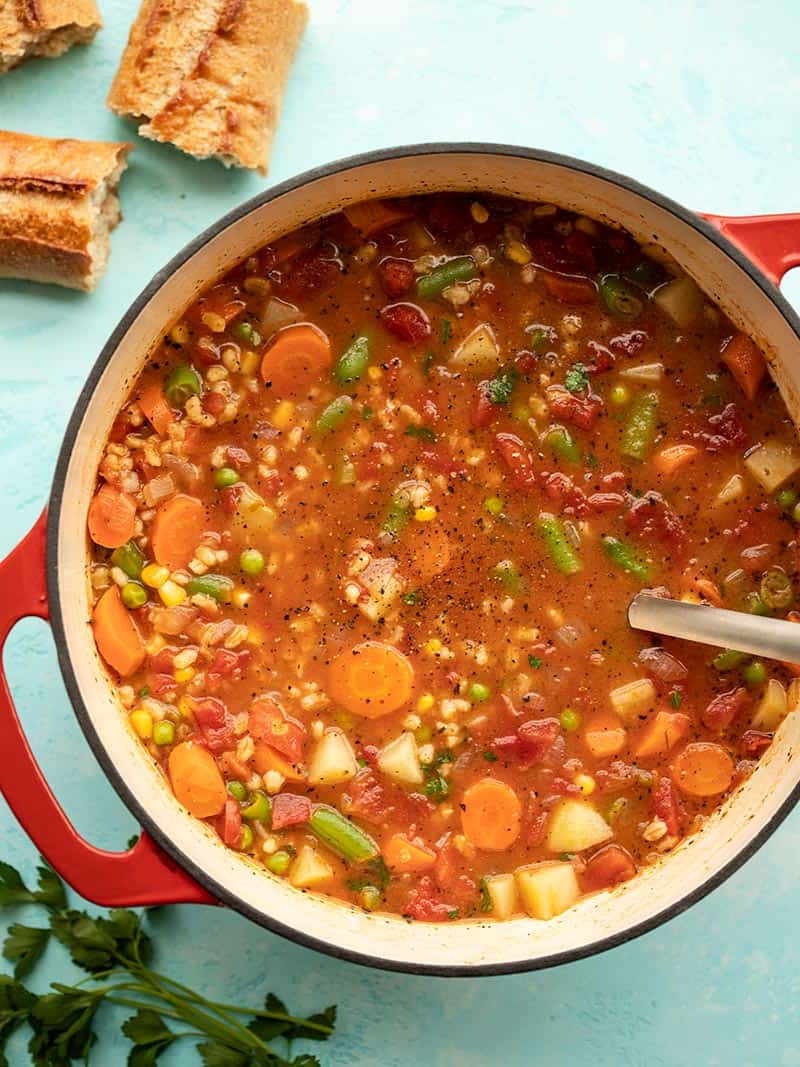 Barley is a short, chewy grain that is great in soups, stews, salads, pilafs, and more. You can usually find it in the grain section of your grocery store, near rice and dry beans. It’s usually labeled “pearled barley” which simply means the outer husk and some of the bran has been removed. Barley does contain a small amount of gluten, so it is not considered a gluten-free food.

Can I Substitute the Barley?

Yep! If you’re not into barley or can’t find it, you can use another grain, like farro or wheat berries, or even pasta. A small shape, like ditalini would be awesome.

Can I Use Other Vegetables?

The beauty of this Vegetable Barley Soup is that it is extremely versatile. You can add just about any vegetable to this soup, which makes it great for using up odds and ends of vegetables in your refrigerator and freezer. I used onion, garlic, diced tomatoes, carrots, potato, frozen green beans, frozen corn, and frozen peas, but you could also substitute or add in any of these vegetables:

Vegetable broth carries a lot of the flavor in this soup, so make sure you use a quality vegetable broth, or one that you know you like. As always, I use Better Than Bouillon soup base to make my broth. It is full-flavored and I can mix up any amount I need when I’m cooking, without having leftovers go to waste. 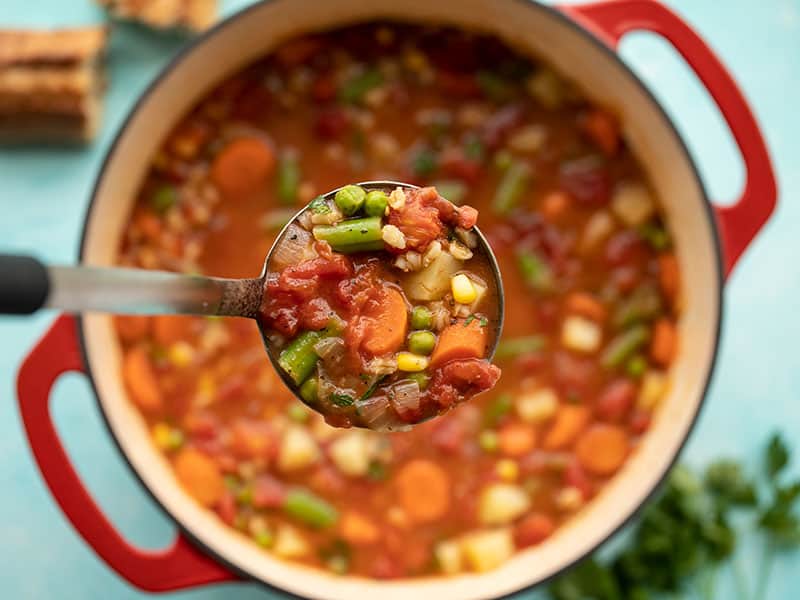 How Much Vegetable Barley Soup Does This Make?

This recipe makes a whopping 12 cups, which I would consider to be about 6 large 2-cup servings. Since the soup is mostly vegetables, I usually go with a slightly larger serving size. This is also a very thick soup once finished, so if you prefer it to be a little more brothy, you can add more vegetable broth and the yield will be even higher.

Can You Freeze Vegetable Soup?

Yes! This soup freezes great. Some people find that potatoes change in texture slightly when frozen and thawed, but it’s not something that I’ve ever noticed or that has bothered me, especially when in a soup.

What Do You Serve with Vegetable Barley Soup?

This soup is just asking for a nice piece of buttered crusty bread for dipping! I would go with something with a lot of texture, like a homemade no knead bread, cornbread, or sour dough. I wouldn’t even be against dropping a few cubes of Swiss cheese into this soup, for a little melty goodness in each bite! 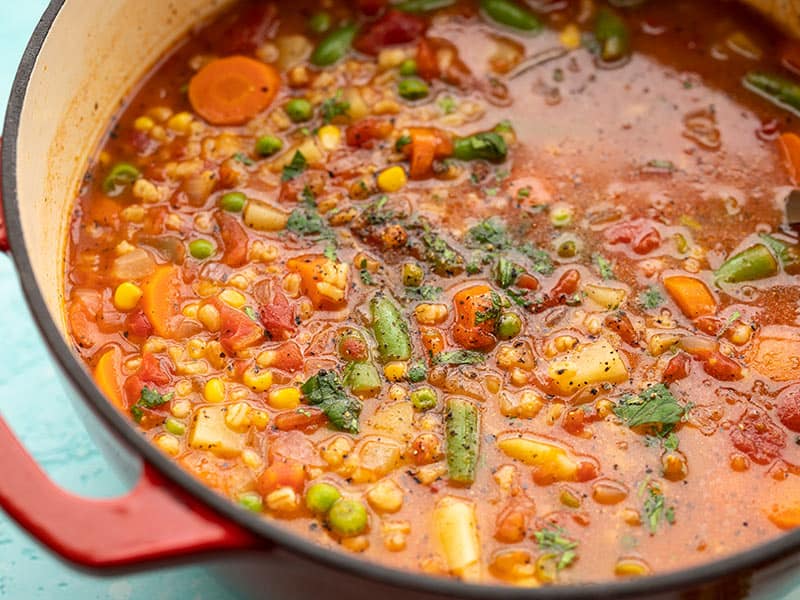 P.S. If you have leftover barley, you should totally make my Baked Barley with Mushrooms! 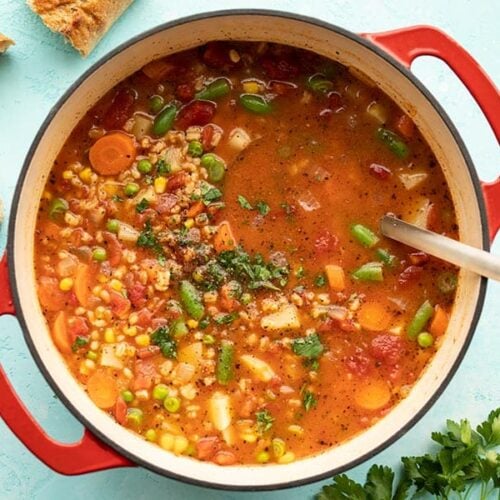 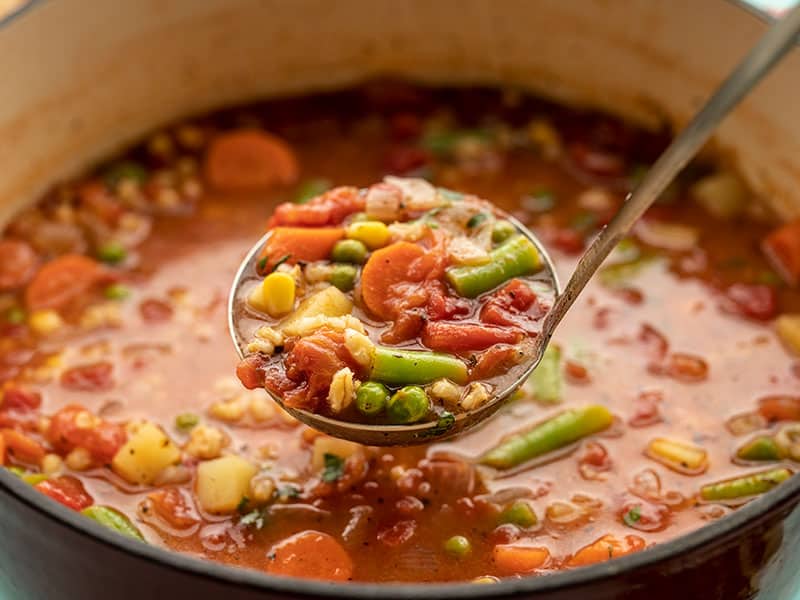 How to Make Vegetable Barley Soup – Step by Step Photos 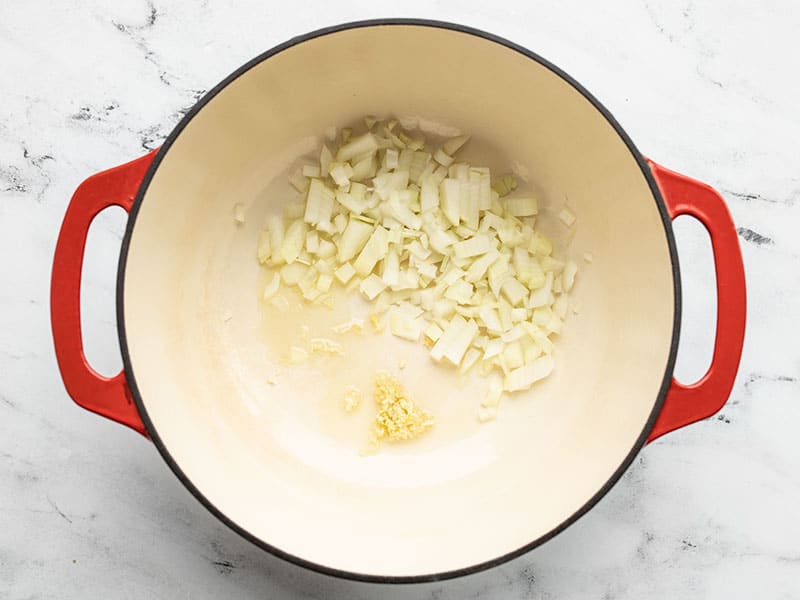 Dice one onion and mince two cloves of garlic. Add the onion and garlic to a large soup pot (mine is 6 qt.) along with 2 Tbsp olive oil. Sauté over medium heat for about 5 minutes, or until the onion is soft and translucent. 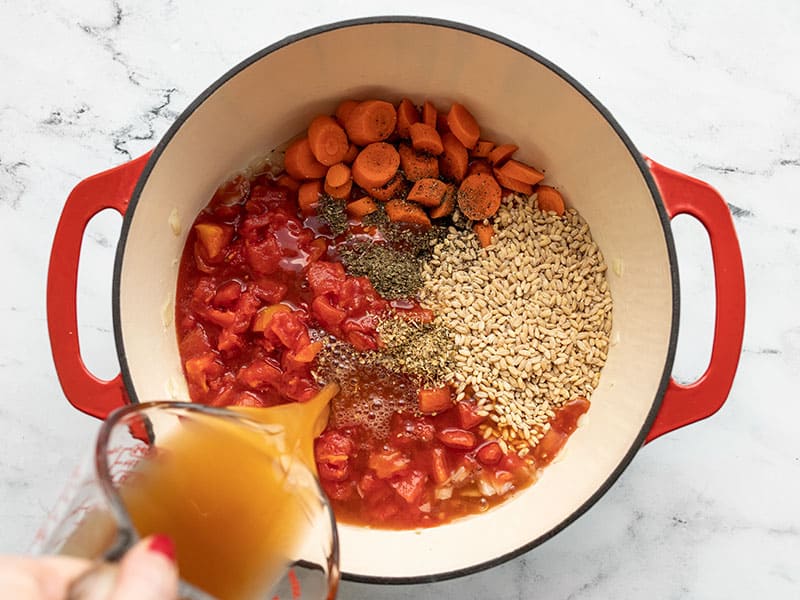 While the onion and garlic are cooking, peel and slice 1/2 lb. of carrots (about 4 medium carrots). Add the carrots to the soup pot along with one 28 oz. can diced tomatoes (with juices), 1 cup pearled barley, 1/2 tsp dried basil, 1/2 tsp dried oregano, some freshly cracked pepper, and 6 cups of vegetable broth. Stir to combine. 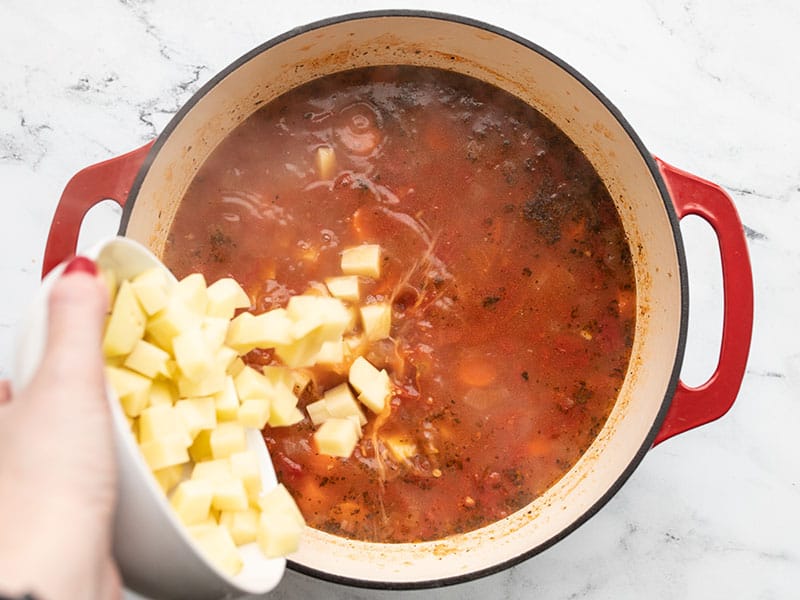 Place a lid on the pot, turn the heat up to medium-high, and bring the soup up to a boil. Once boiling, turn the heat down to medium-low and let it simmer, lid in place, stirring occasionally, for 30 minutes. While the soup simmers, peel and dice a russet potato into 1/2-inch cubes. After simmering 30 minutes, add the diced potato and simmer 10 minutes more. 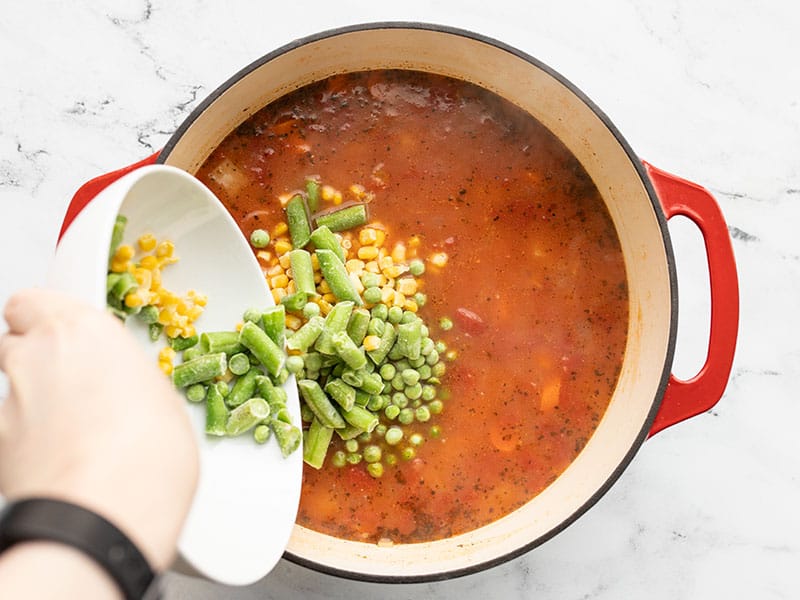 After simmering 10 minutes, the potatoes should be tender. Add 1 cup frozen green beans, 1/2 cup frozen peas, and 1/2 cup frozen corn to the soup. Stir to combine, and heat through (about 5 minutes). 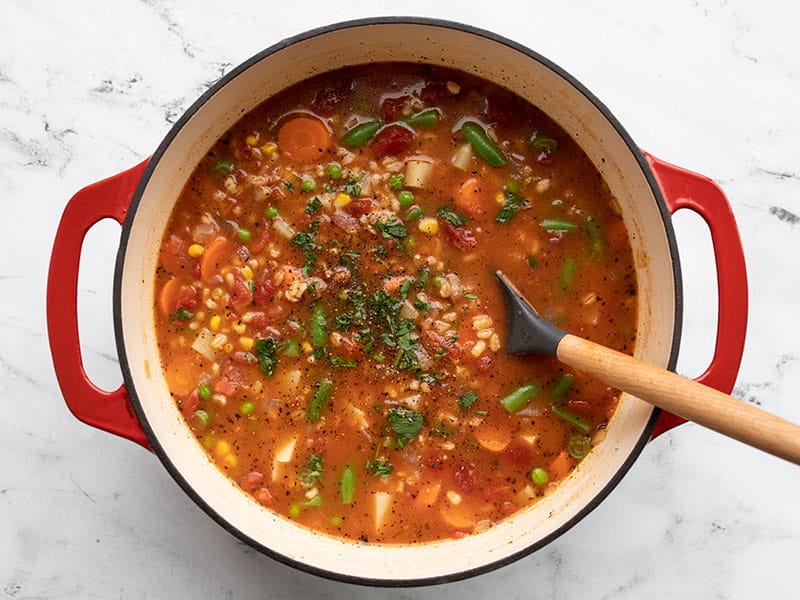 Finally, stir 1 Tbsp lemon juice into the soup. Give it a taste and adjust the salt and pepper to your liking (I added a touch more pepper, but no salt). Garnish with fresh chopped parsley, if desired. 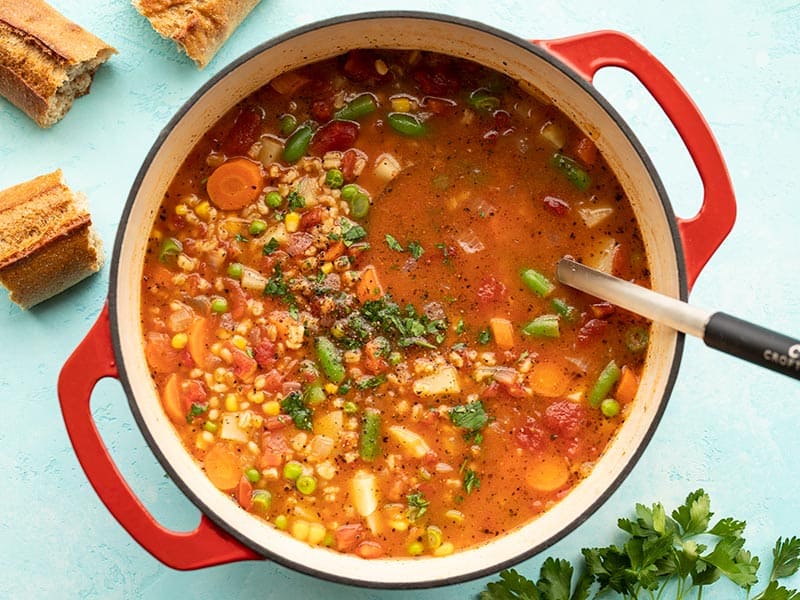 YUMMMM. Vegetable-y goodness got me all warm and cozy!