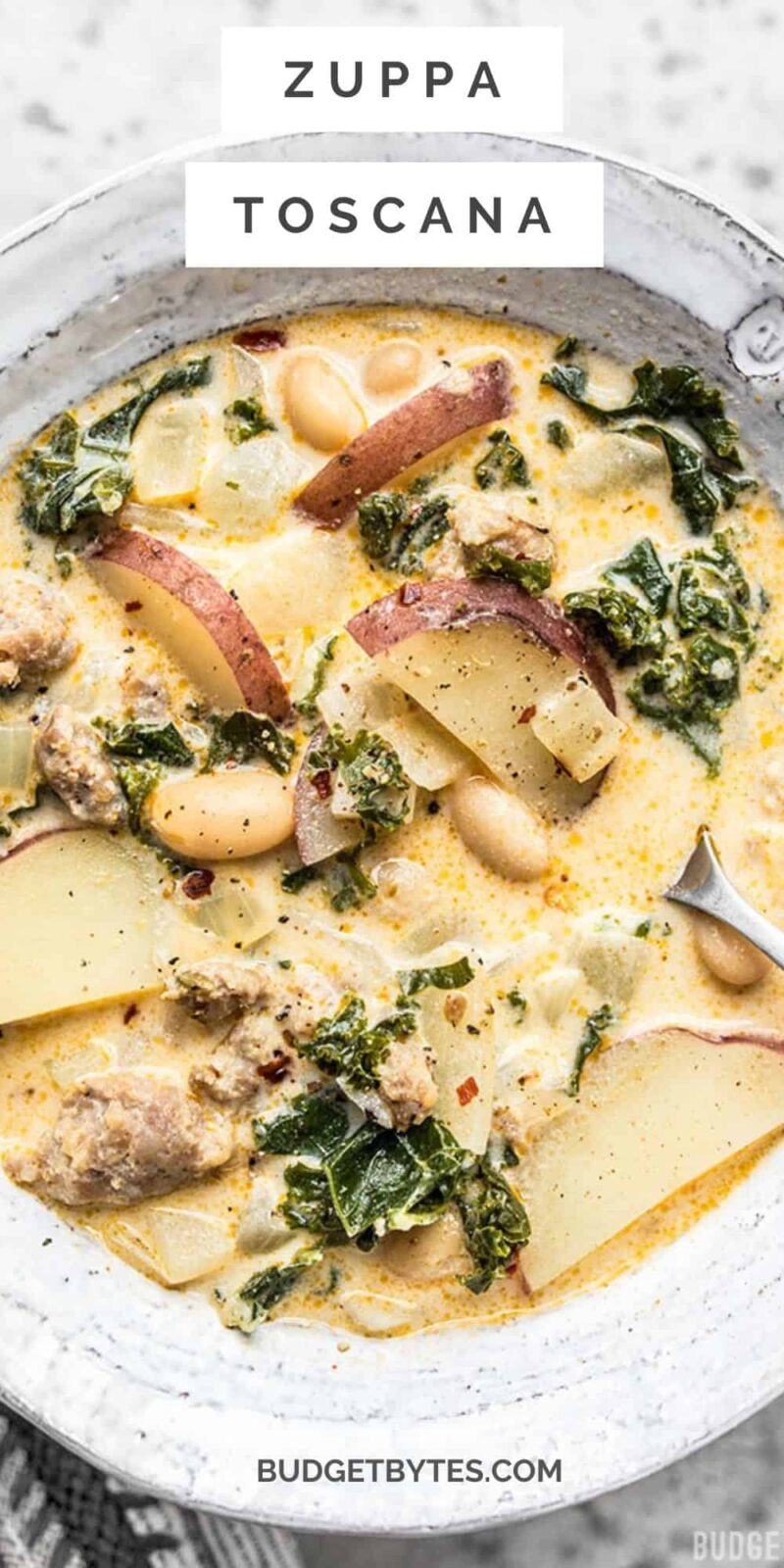 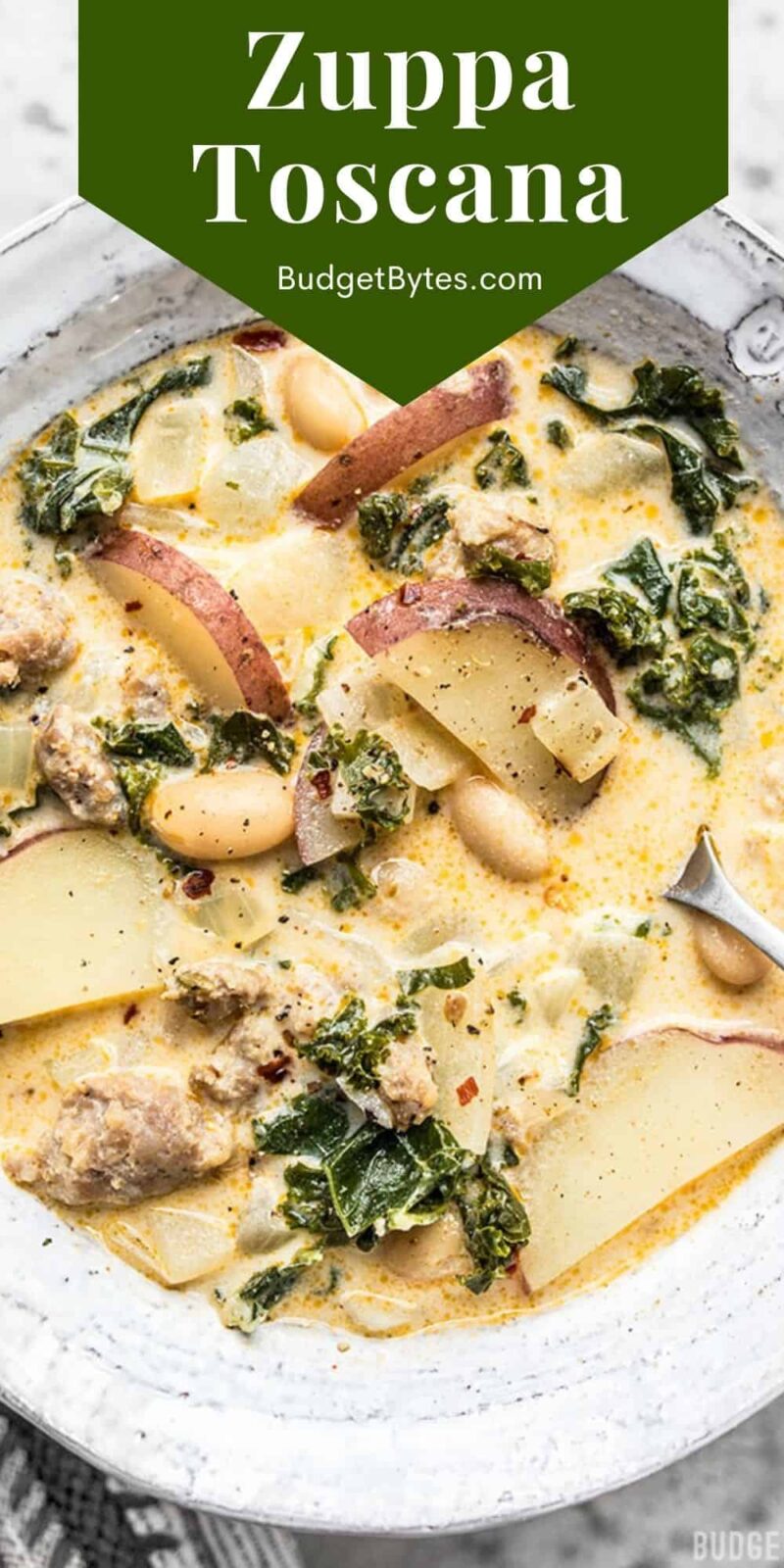 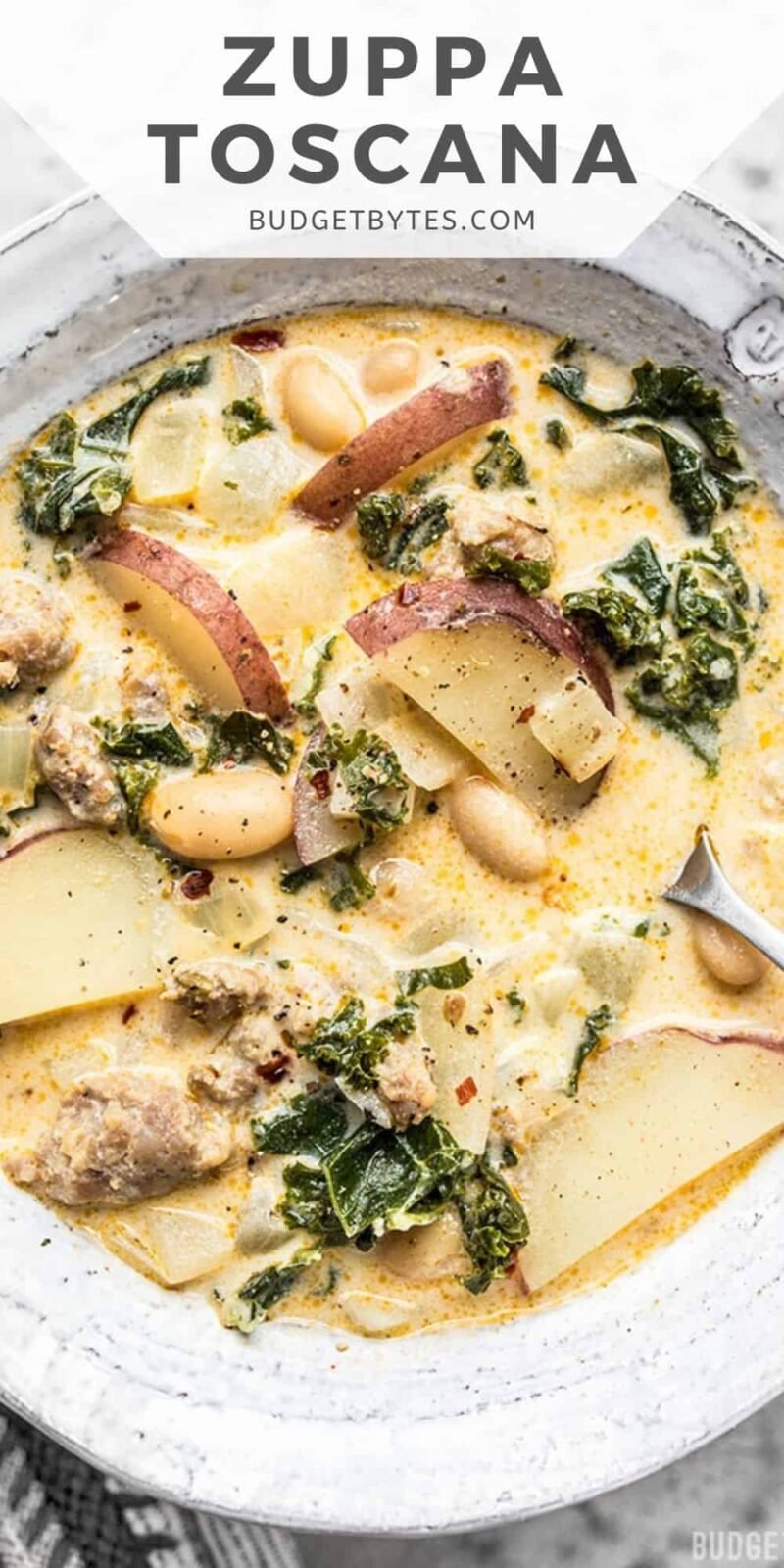 Zuppa Toscana… it’s one of those recipes that every food blogger has made. I see it on Pinterest at least once per day. At least. I usually try to avoid over-hyped recipes like this but, this one is just too good to leave alone. It’s like “give me ten bowls of that!” good. And although my version of Zuppa Toscana is a bit lighter, it’s still every bit as creamy, filling, and delicious as the original.

You might want to dip some Homemade Garlic Bread into this bowl of goodness. Just sayin’. 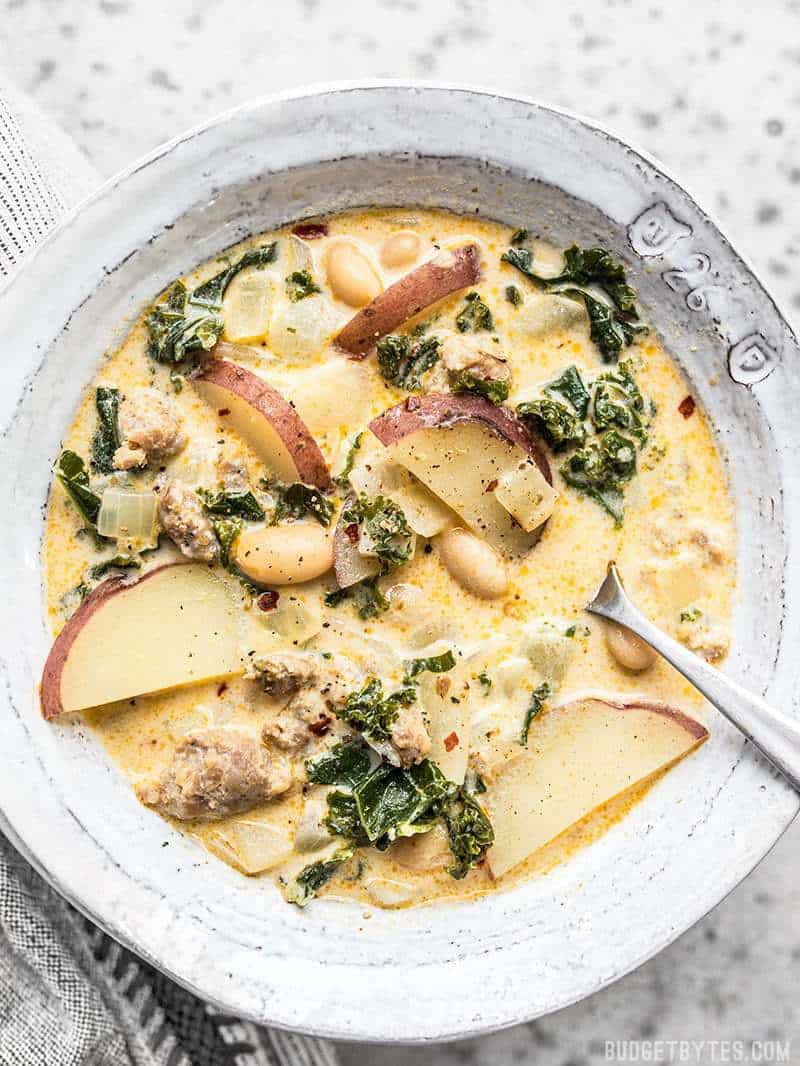 What is Zuppa Toscana??

If you’ve never been to Olive Garden or had Zuppa Toscana anywhere else, I’d describe it like a creamy potato soup loaded with flavorful Italian sausage, kale, and bacon. The original version uses heavy cream, bacon, and a whole pound of sausage, but I decided to try to lighten it up a bit. I used half and half instead of heavy cream, subbed half the sausage for white beans, used smoked paprika for smokiness instead of bacon, and then loaded up on potatoes and kale. The result? Still totally creamy and chock full flavor, plus a hefty dose of vegetables. I’m probably going to eat nothing but this soup for the next four days straight (it has kale, so it’s okay, right?).

Do I have to include beans?

No, that’s just my little extra. I try to add beans to recipes whenever I can because they add so many nutrients and fiber, that they just make everything better. I used Great Northern Beans this time around, but Cannellini or navy beans would also be awesome!

Can I substitute the kale?

Yes. While the kale is more classic to this soup, you can use spinach if kale is not your think. Since spinach is a lot more delicate than kale, add the spinach at the very end of the cook time, stirring it in just until it has wilted.

Can I make this Zuppa Toscana vegetarian?

The sausage in this recipe is responsible for adding a lot of flavor to this soup, so if you plan to skip the sausage you’ll need to ramp up the seasoning. I suggest adding a tablespoon or so of Italian seasoning blend to make up for the spices that are found in the Italian sausage. You may also want to add an extra can of beans to bulk up the soup a bit. 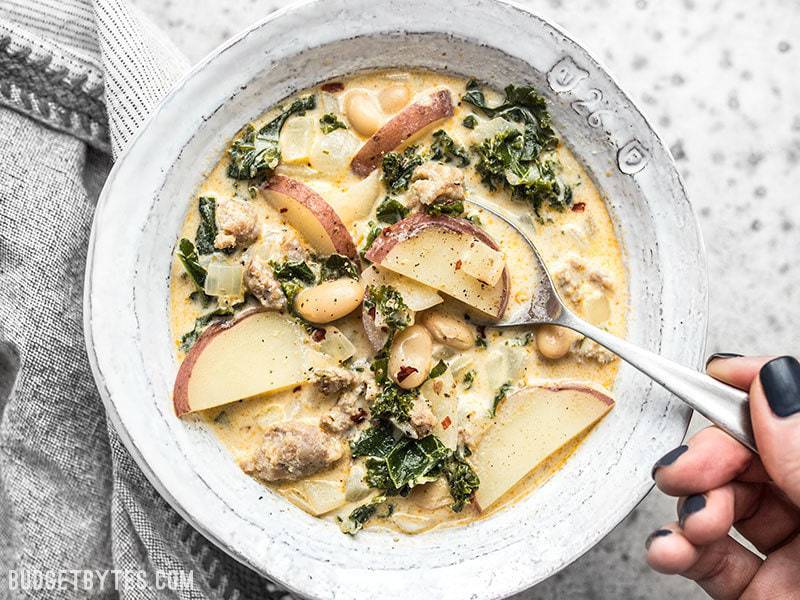 4.85 from 126 votes
This homemade version Olive Garden's Zuppa Toscana is slightly lighter, but every bit as creamy, filling, and flavorful as the original! 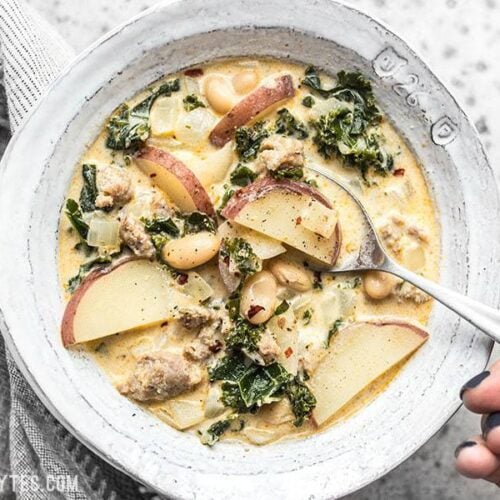 How to Make Zuppa Toscana – Step by Step Photos 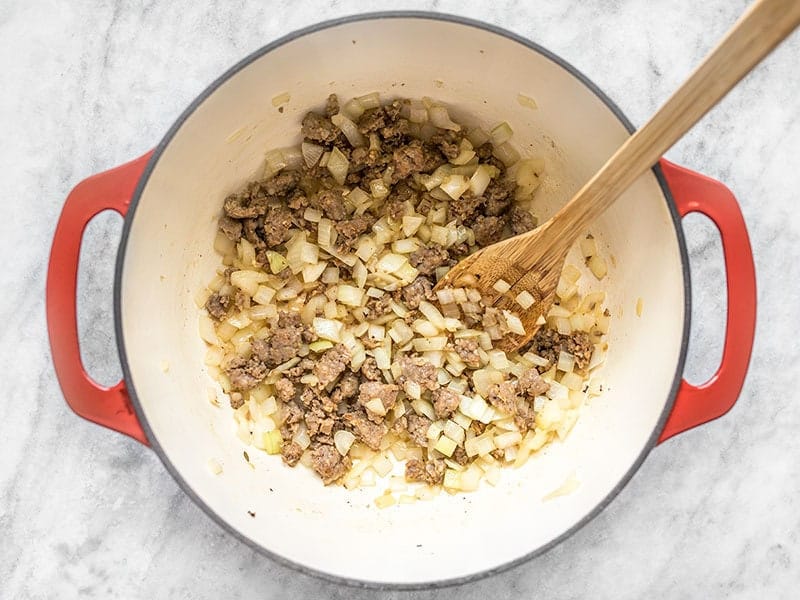 Add 1/2 lb. Italian sausage to a large soup pot and sauté over medium heat, breaking it into chunks as it cooks. I didn’t use any extra oil because sausage tends to be pretty fatty. It’s okay if a little sticks to the bottom of the pot because it will dissolve off in the next steps. While the sausage browns, dice one yellow onion and mince two cloves of garlic. Add the onion and garlic to the pot and continue to sauté until the onions are soft. 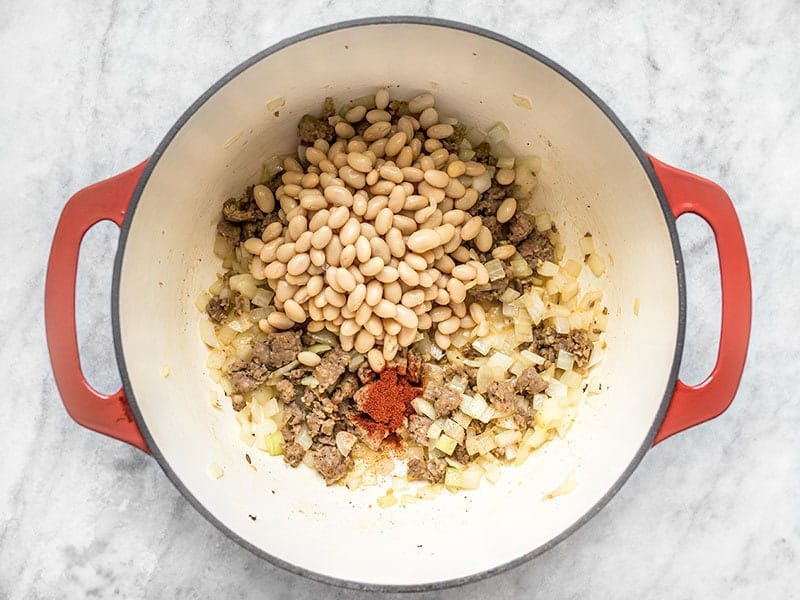 Drain and rinse one 15oz. can of Great Northern beans, then add them to the pot with 1/2 tsp of smoked paprika. The smoked paprika will give that smoky hint that the bacon would have supplied. Sneaky, right? 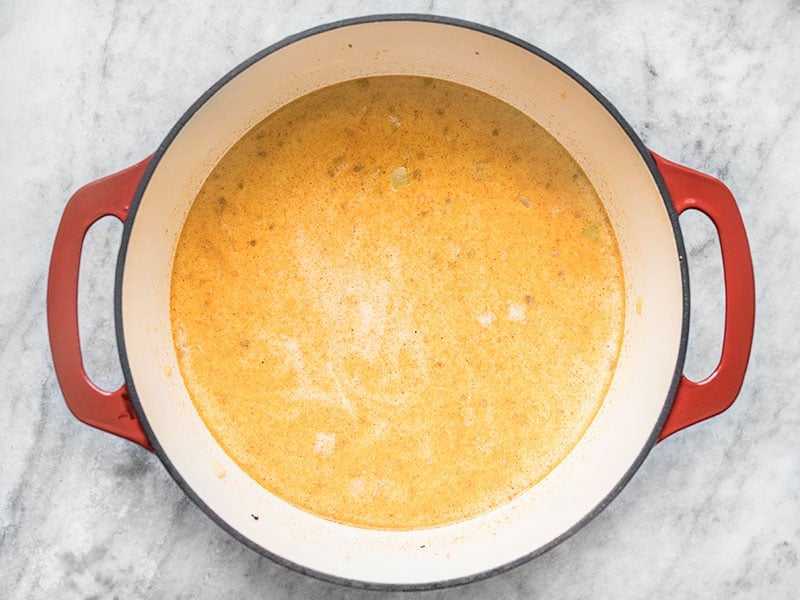 Next add 3 cups of chicken broth, 1 cup water, and 2 cups (one pint) of half and half. If you’re not from the U.S., “half and half” is like a lighter version of light cream. Read about it here. Put a lid on the pot and let it come to a simmer over medium heat. 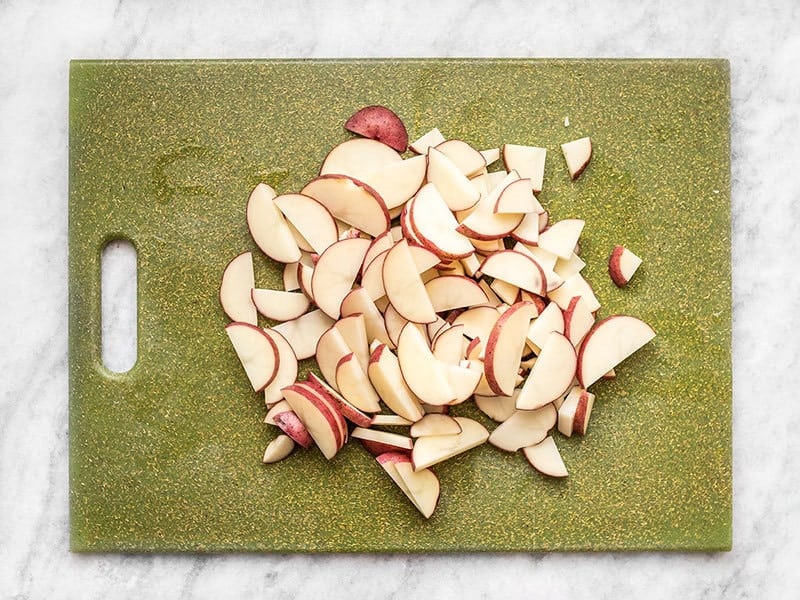 While the pot is heating up, wash and slice one pound red potatoes into 1/8-inch thick slices. Slicing them thinly helps them cook faster, plus makes a great texture in the soup. Add the potatoes to the pot. 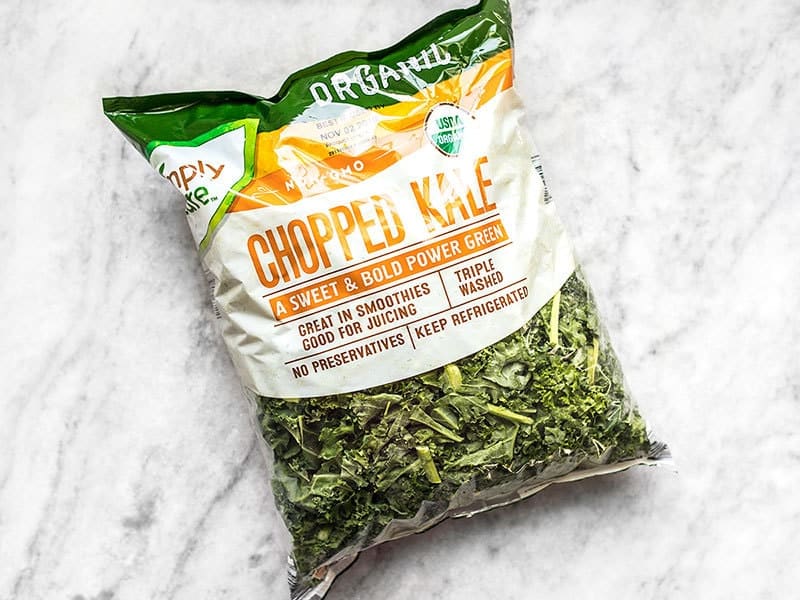 Instead of buying a regular bunch of kale, I bought this bag of pre-chopped kale (it’s actually less expensive than regular bunches at my local store). This is a 12oz. bag, so I just used about 2/3 of it. If you are buying your kale in a bunch, use about one bunch. Make sure to remove the stems and tear the leaves into 1 to 2-inch pieces. 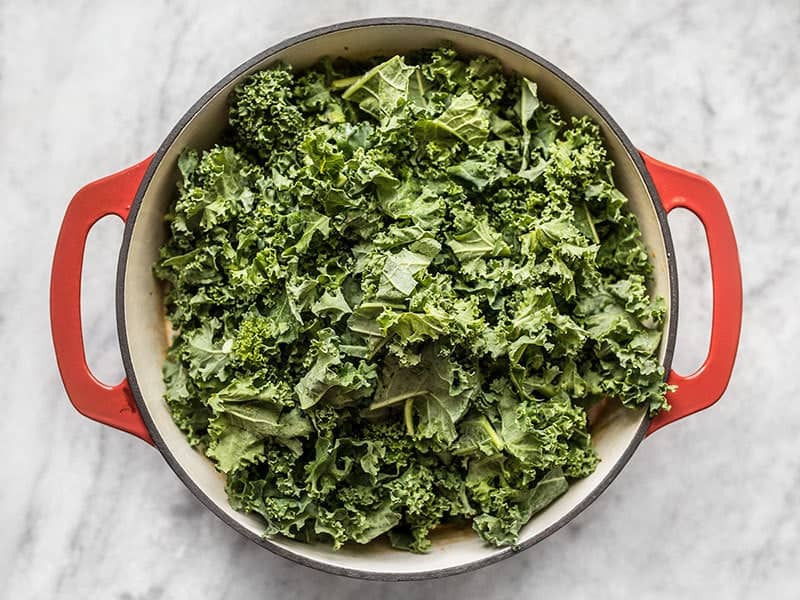 Add the kale to the pot and it will likely fill it up to the top. Let the heat from the liquid begin to wilt the kale. Give it a stir occasionally to help it contact the hot soup and wilt. 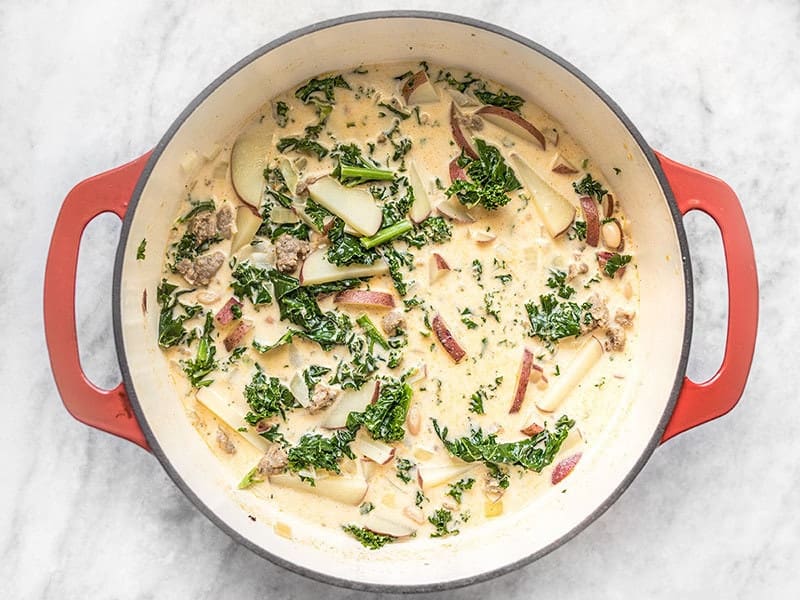 After a few minutes it will have wilted down into the soup nicely. Let the soup simmer over medium heat for about 15 minutes, or until the potatoes are tender. 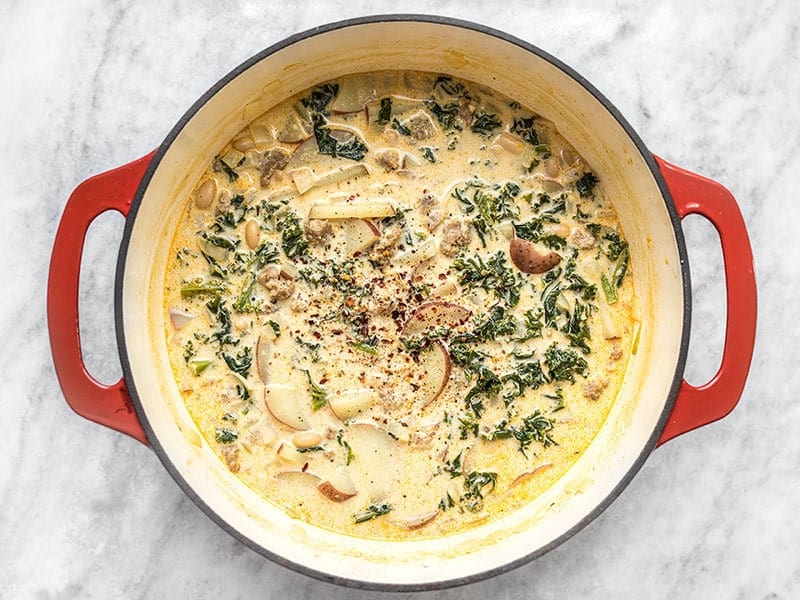 I like my soup spicy (and had used mild Italian sausage), so I seasoned with a pinch of red pepper flakes. A little freshly cracked black pepper is also nice. Depending on what type of broth you use, you may need to add a little salt (I did not add any). 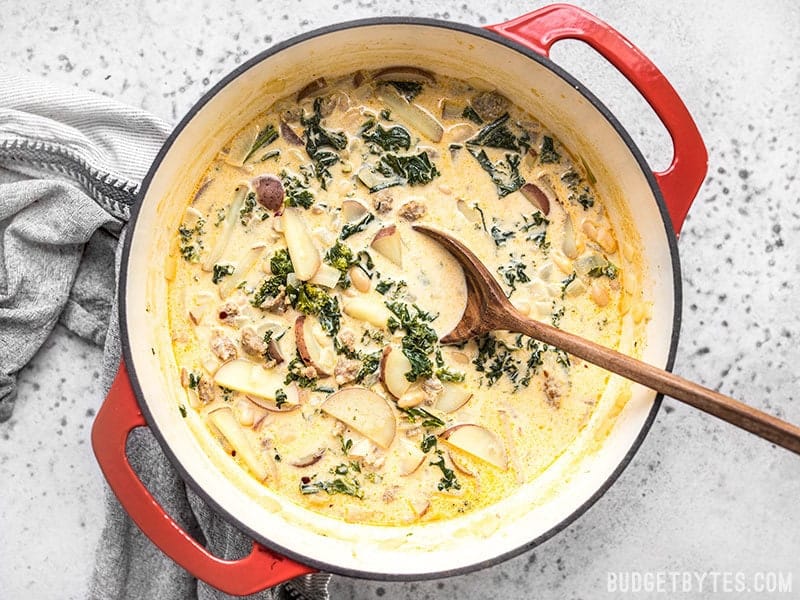 And that’s it!! The potatoes and beans help thicken the broth up nicely, without having to use heavy cream. 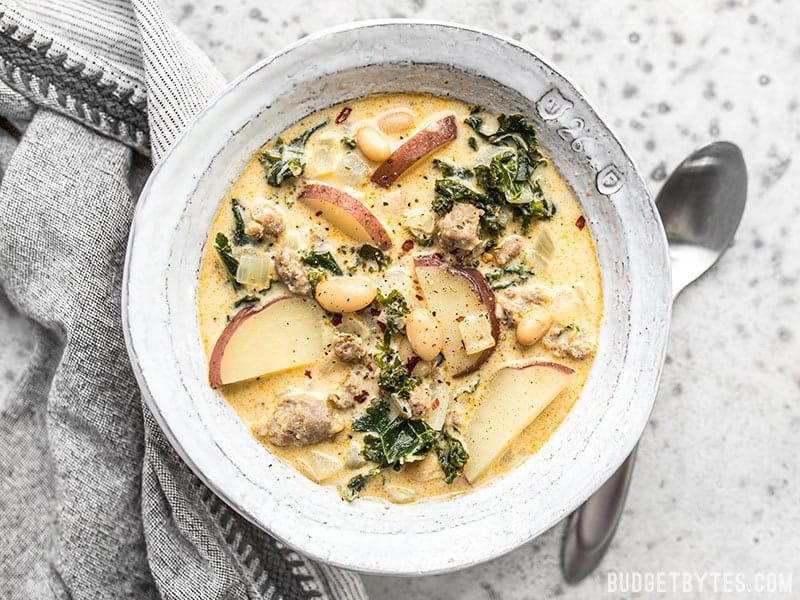 Absolutely deserving of all the internet hype. SO. GOOD.