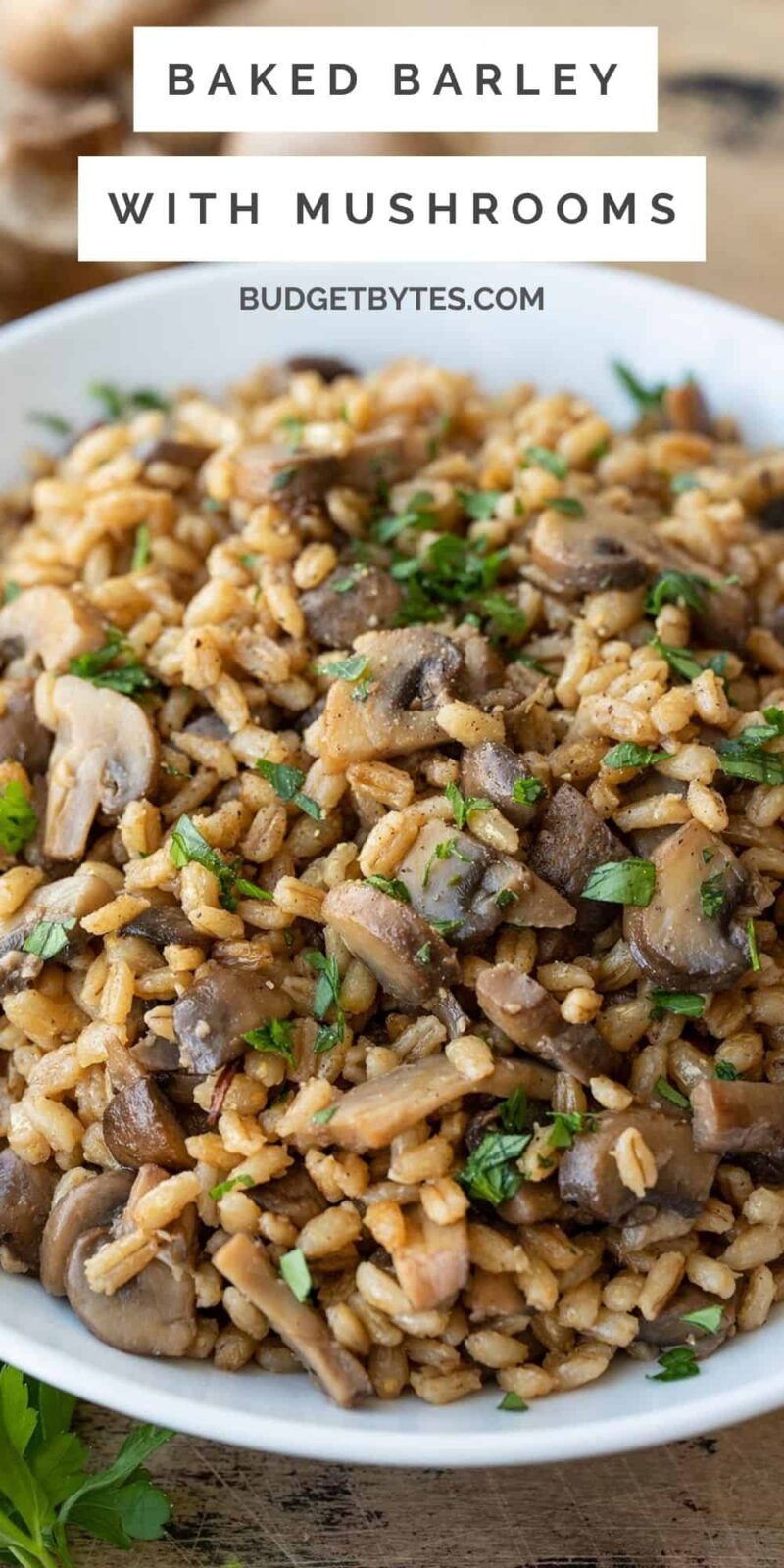 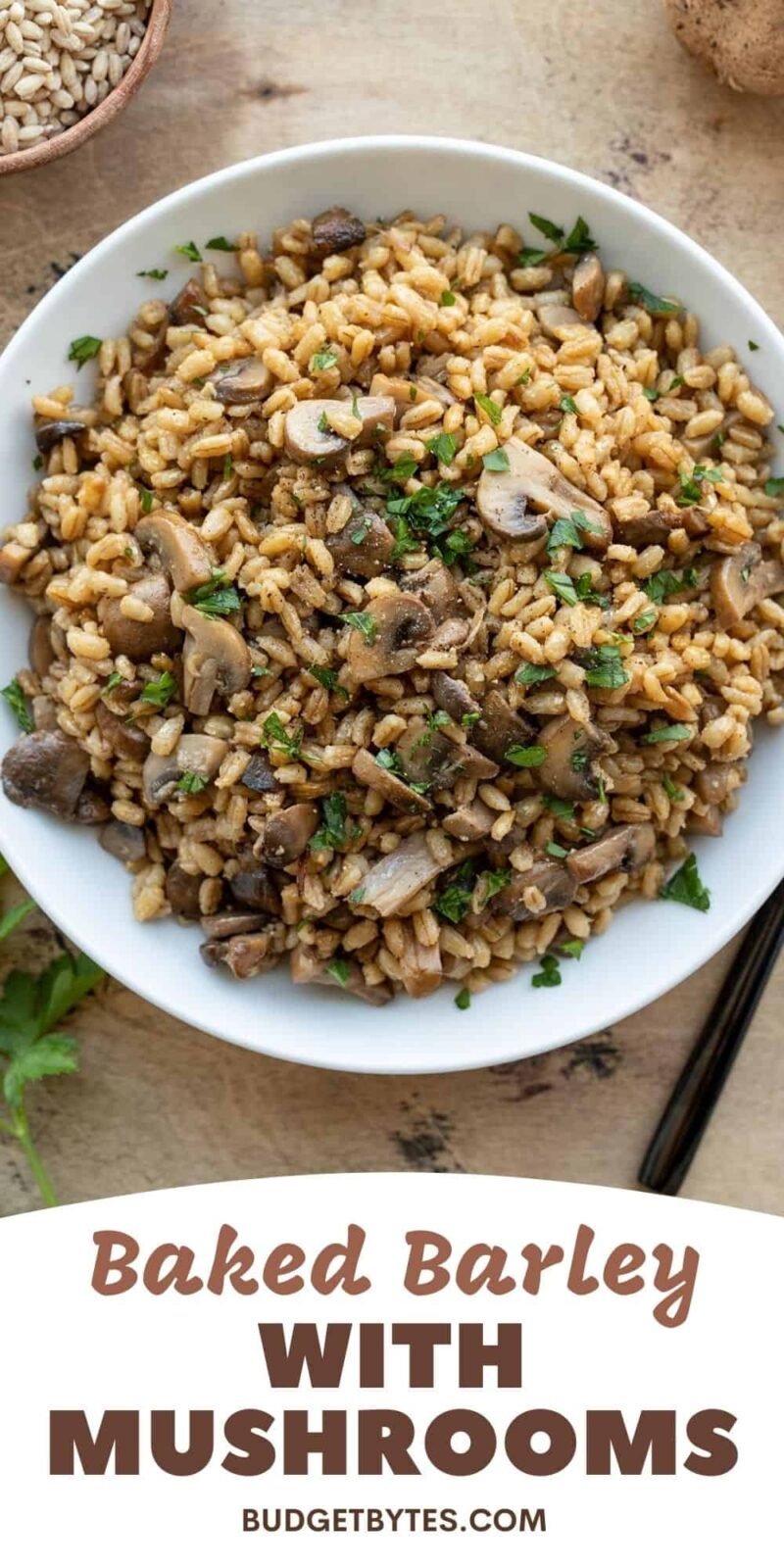 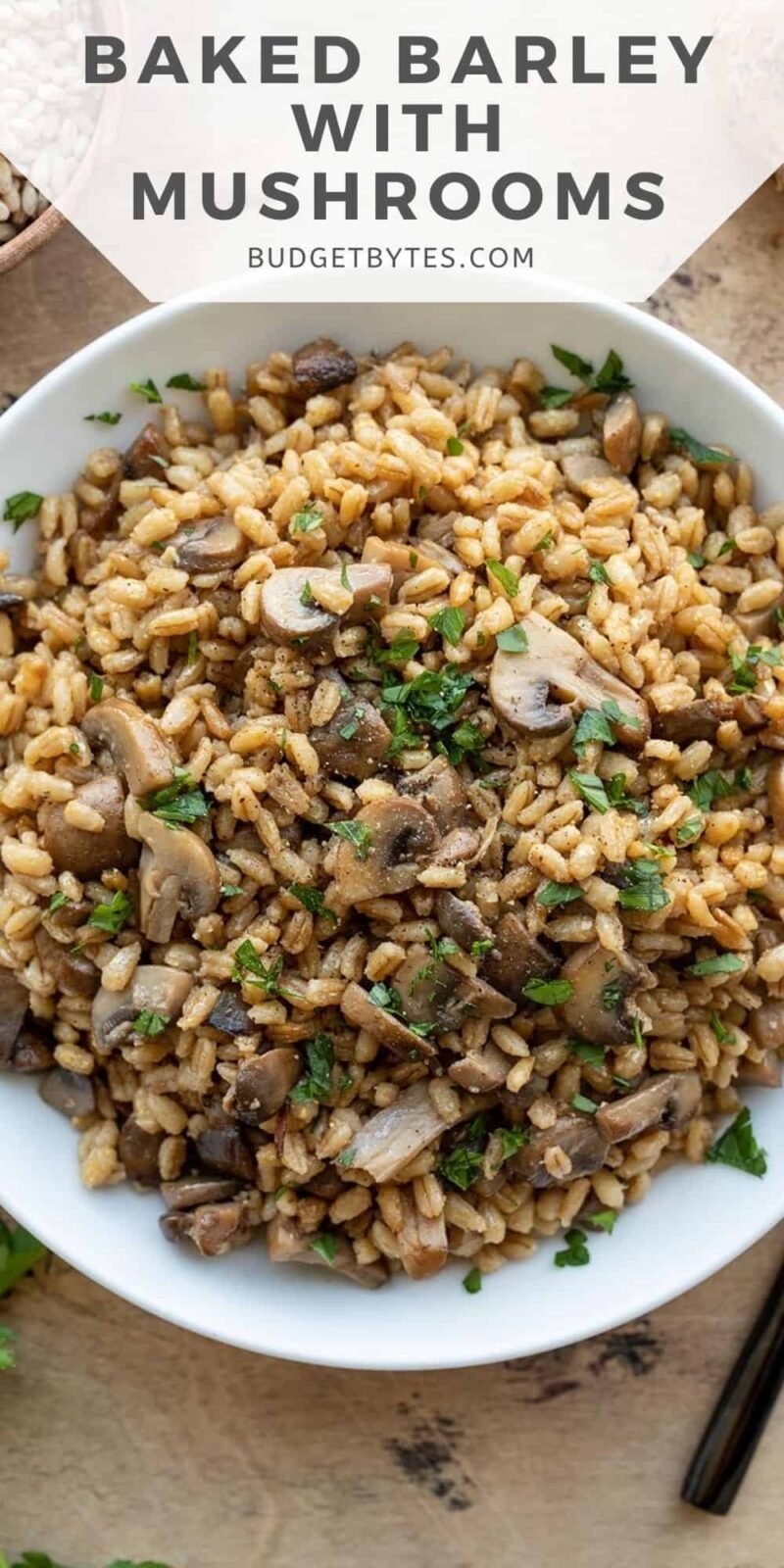 I grew up eating this Baked Barley with Mushrooms and I always looked forward to it on chilly winter nights. It’s a simple dish made with pearled barley cooked in a flavorful mix of vegetable broth, butter, and mushrooms for an extra umami kick. Plus, it cooks mostly in the oven, leaving your hands and attention available to tend to other things. It’s a nice alternative to plain rice for meals like pot roast, brisket, baked pork chops, or any roasted or braised meat. Those hearty little grains are perfect for soaking up every last drop of your pan drippings! 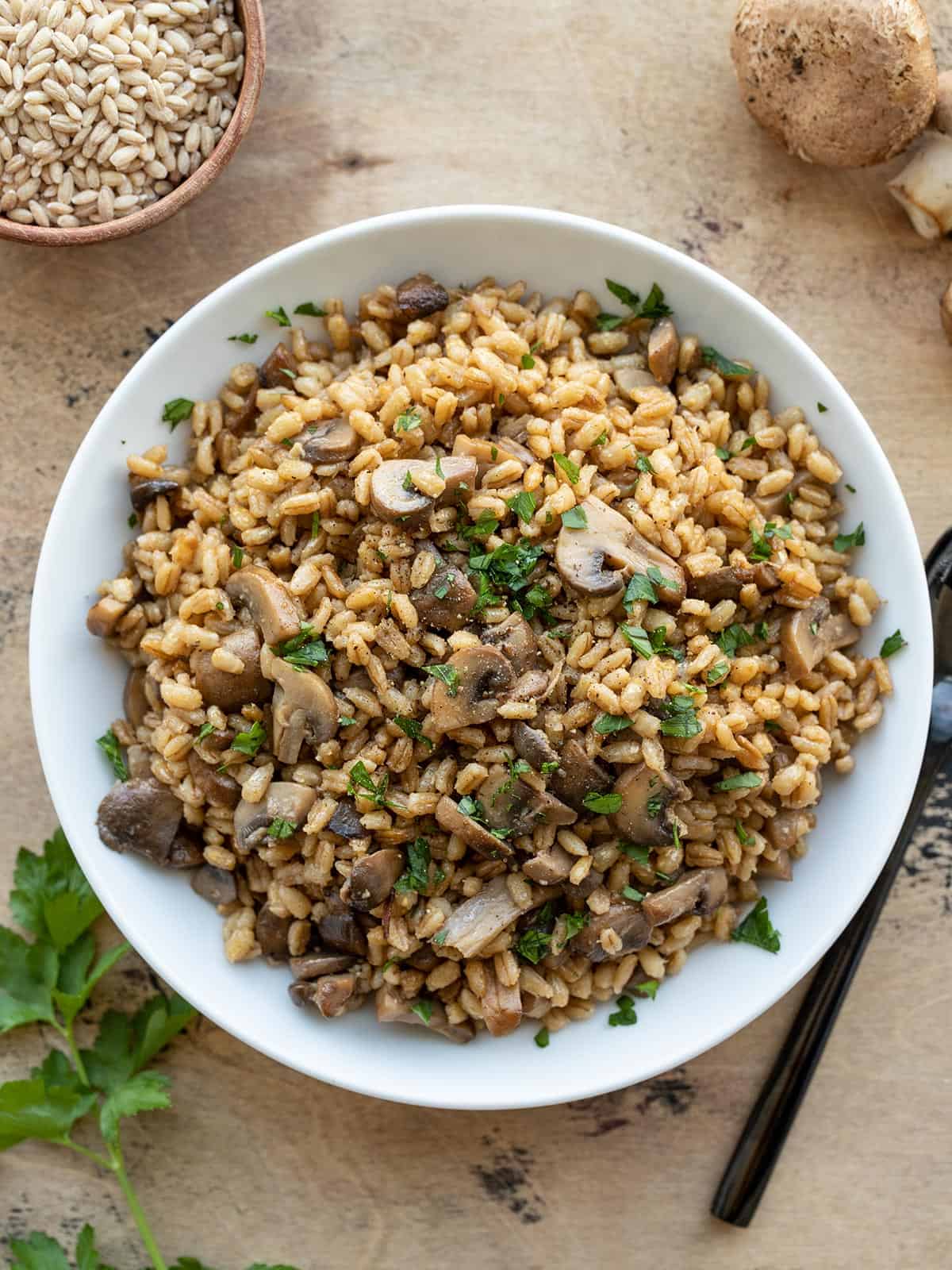 What Kind of Baking Dish to Use

You’ll need some sort of baking dish with a tight-fitting lid, like a Dutch oven, because if the steam from the broth is not held inside as it bakes, the barley will not cook through. I used an enameled cast-iron Dutch oven that was probably a little too big for the scale of this recipe, but it still turned out great. The recipe makes about four cups, so something in the 2-3 quart size range is probably ideal. Glass, ceramic, or cast iron will all work as long as it has a tight-fitting lid.

If your baking dish is not safe for use on the stovetop, simply use a skillet for the first couple of steps (sautéing the mushrooms), then transfer to the baking dish when adding the barley and broth.

What is Pearled Barley?

It’s very important that you use pearled barley for this recipe. Pearled barley is whole barley grains that have had the outer husk removed and are then are polished to remove some or all of the outer bran. The resulting grain is tender and chewy once cooked, and doesn’t take quite as long to cook as hulled barley. You can usually find pearled barley near the dry rice and beans in the grocery store, or near other specialty grains.

I used the Bob’s Redmill brand, which is slightly less polished than other brands that I’ve used and it resulted in a slightly more firm grain.

This recipe is pretty flexible and you can experiment with adding more hearty vegetables, like carrot, celery, onion, turnip, or rutabega. I suggest dicing the vegetables and sautéing them briefly with the mushrooms before adding the remaining ingredients.

What to Serve with Baked Barley 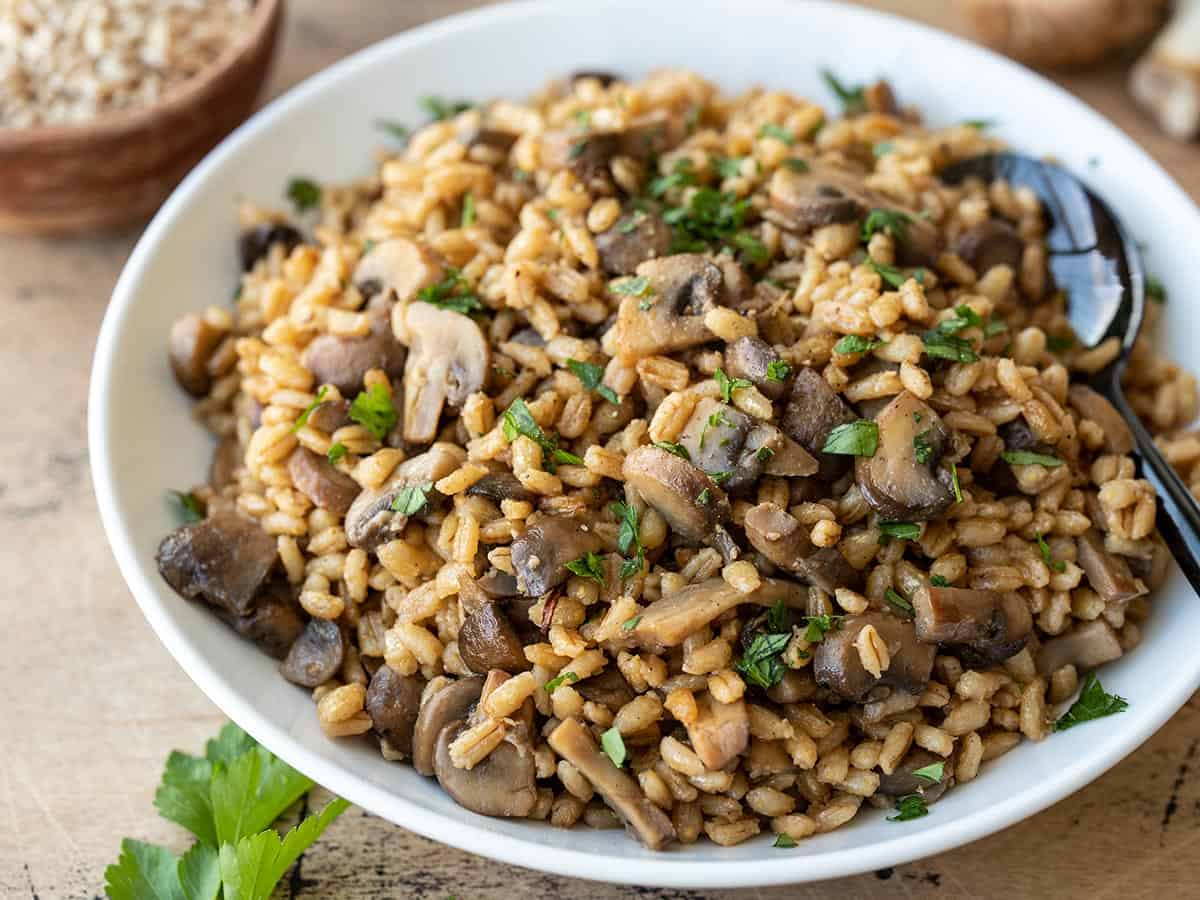 4.72 from 28 votes
Baked Barley with Mushrooms is a hearty side dish perfect for chilly fall and winter nights that pairs perfectly with roasted meat or stew.
Author: Beth - Budget Bytes 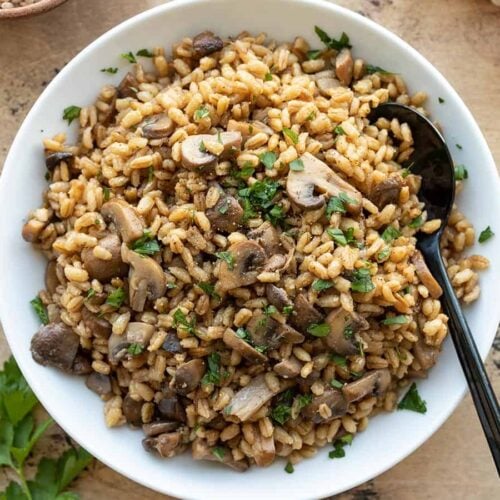 How to Make Baked Barley with Mushrooms – Step by Step Photos 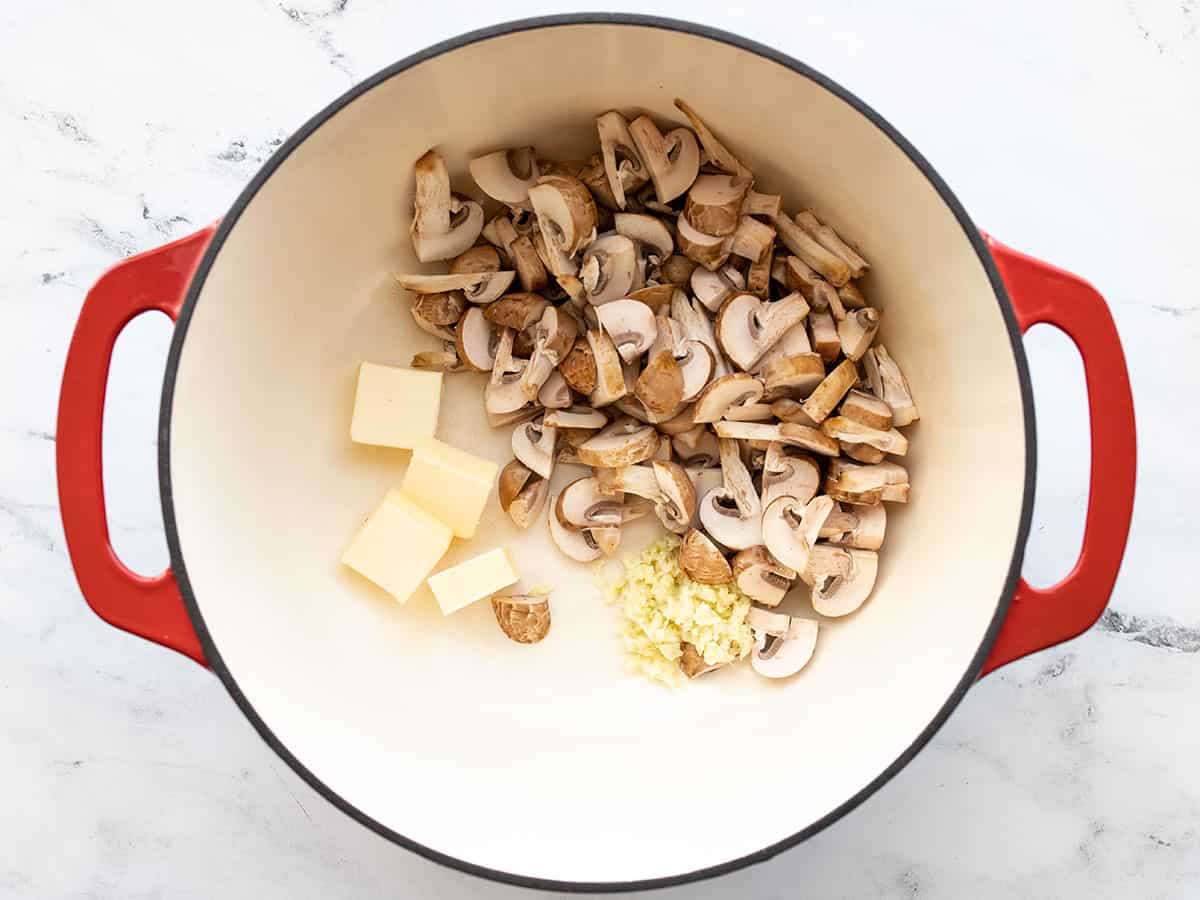 Preheat the oven to 350ºF. Add 4 Tbsp butter, 2 cloves of minced garlic, and 8oz. sliced mushrooms to a pot. Sauté over medium heat until the mushrooms have softened. 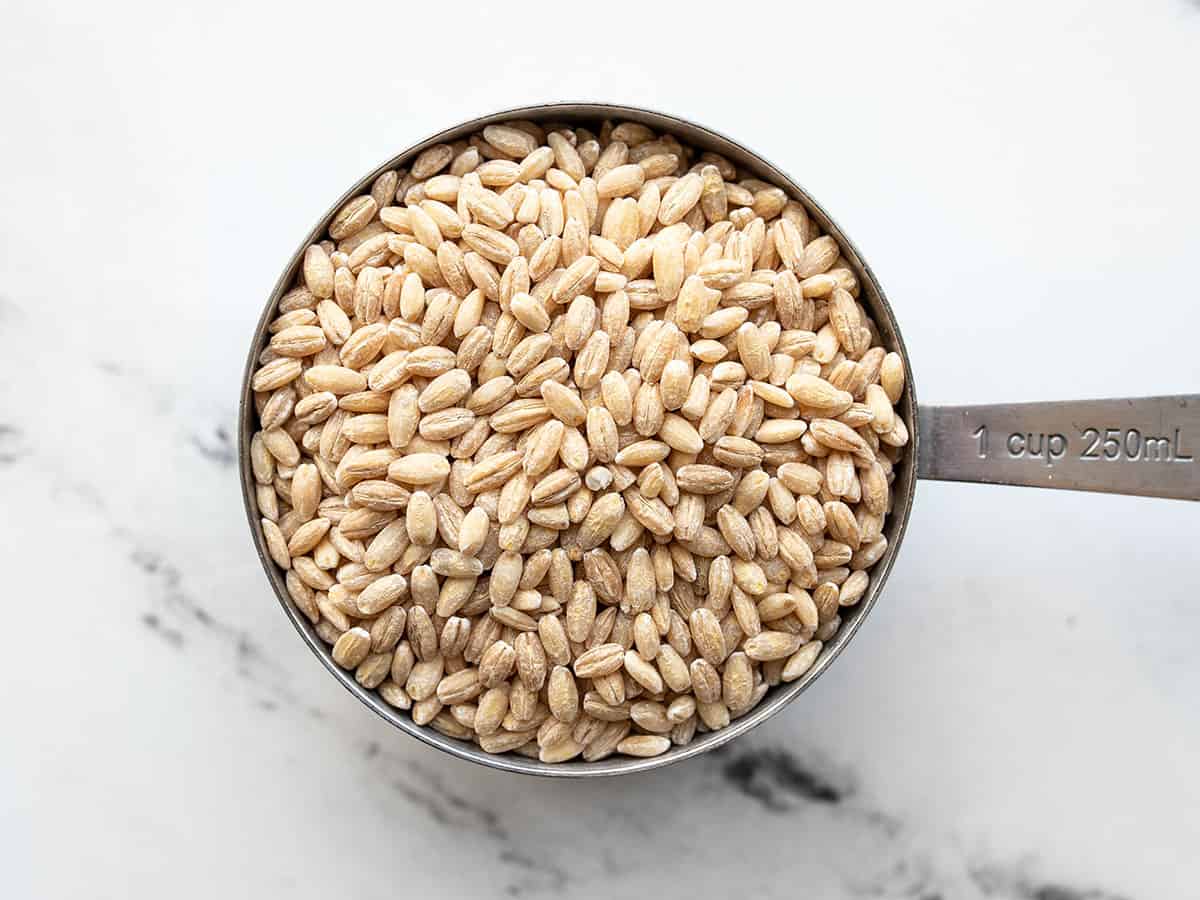 This is what the pearled barley looks like. As mentioned above, this is Bob’s Redmill brand, which appears to be less polished than other generic brands I’ve used in the past. Pearled barley often looks very white, so this barley still has a considerable amount of bran left intact. Because of that, the grains were a little more firm this time around. Either way, it still tasted great! 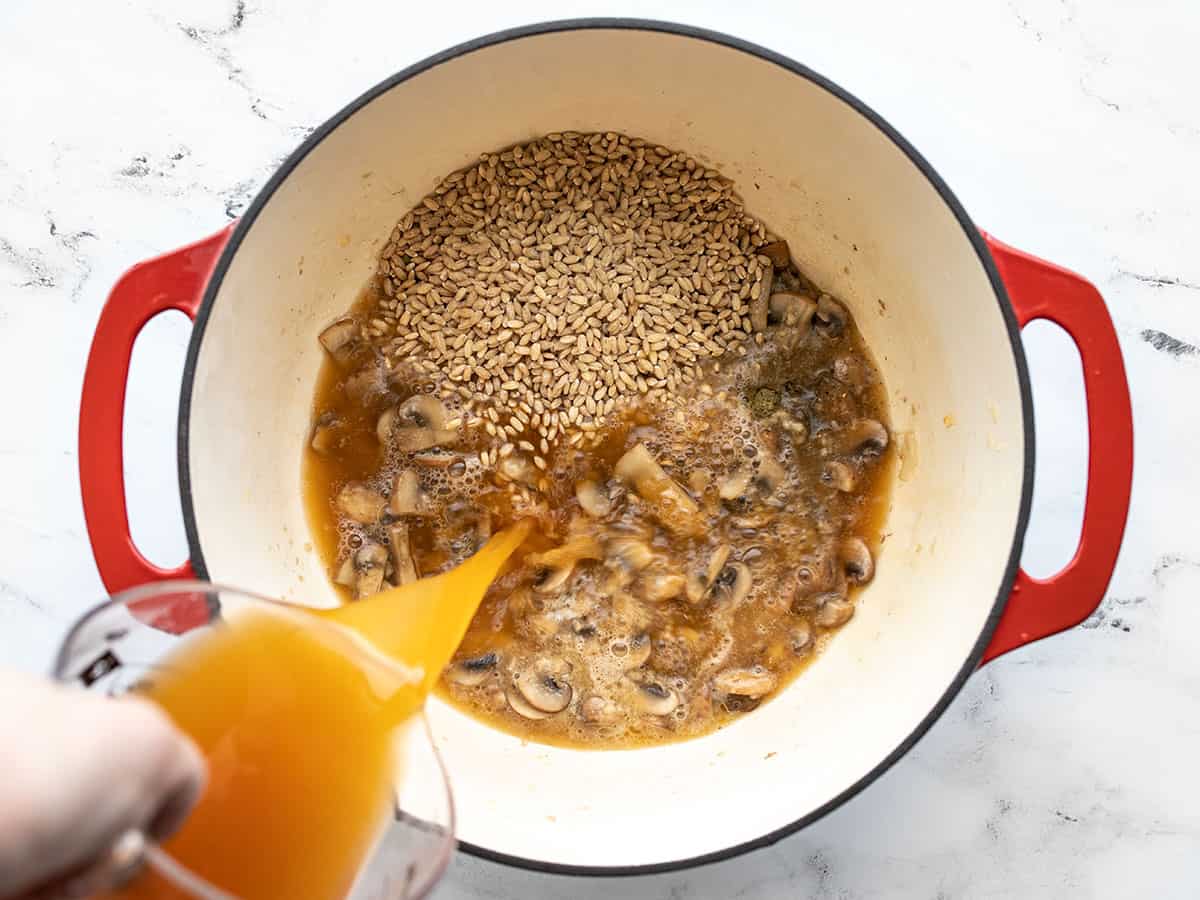 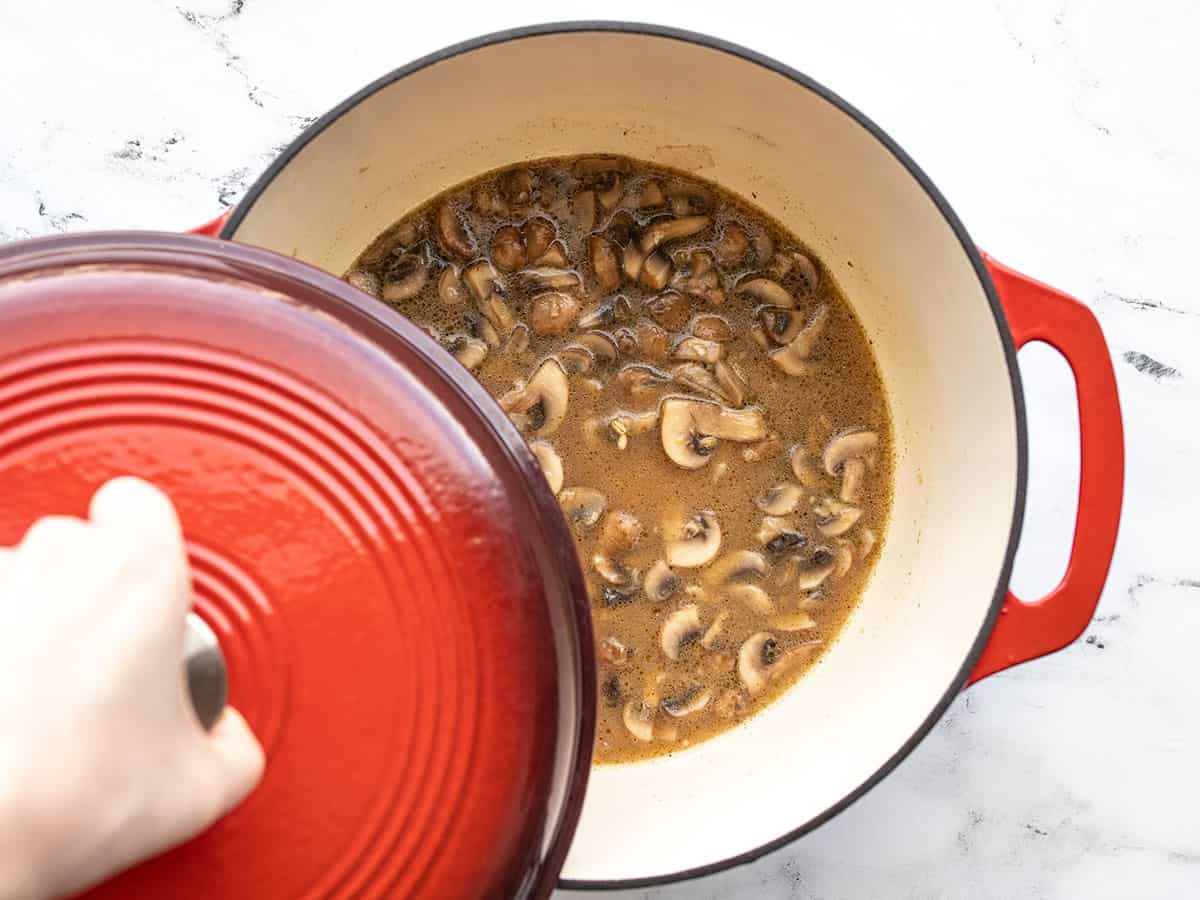 Place a lid on the pot and transfer it to the oven. Bake the barley in the 350ºF oven for one hour. 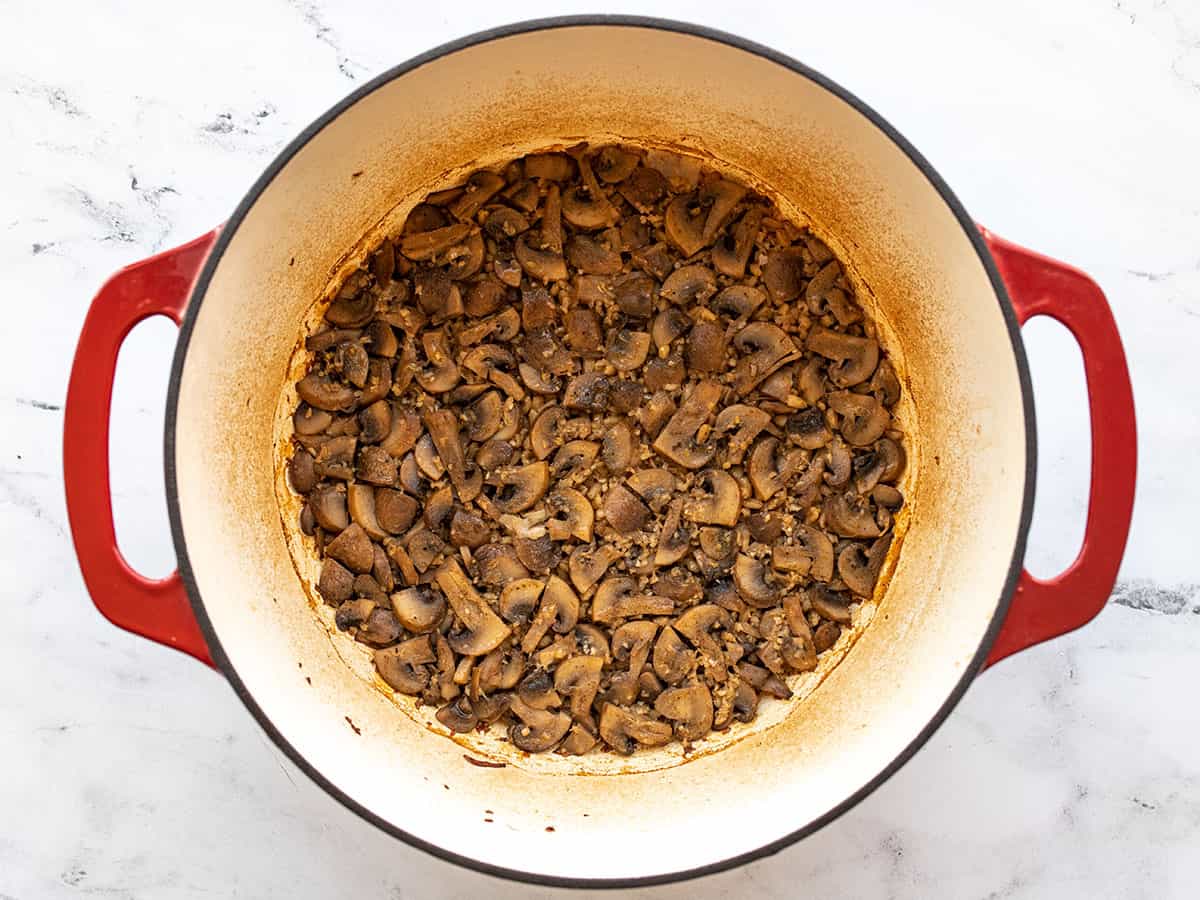 After baking it will look like this–the mushrooms will have risen to the top, fully covering the barley. 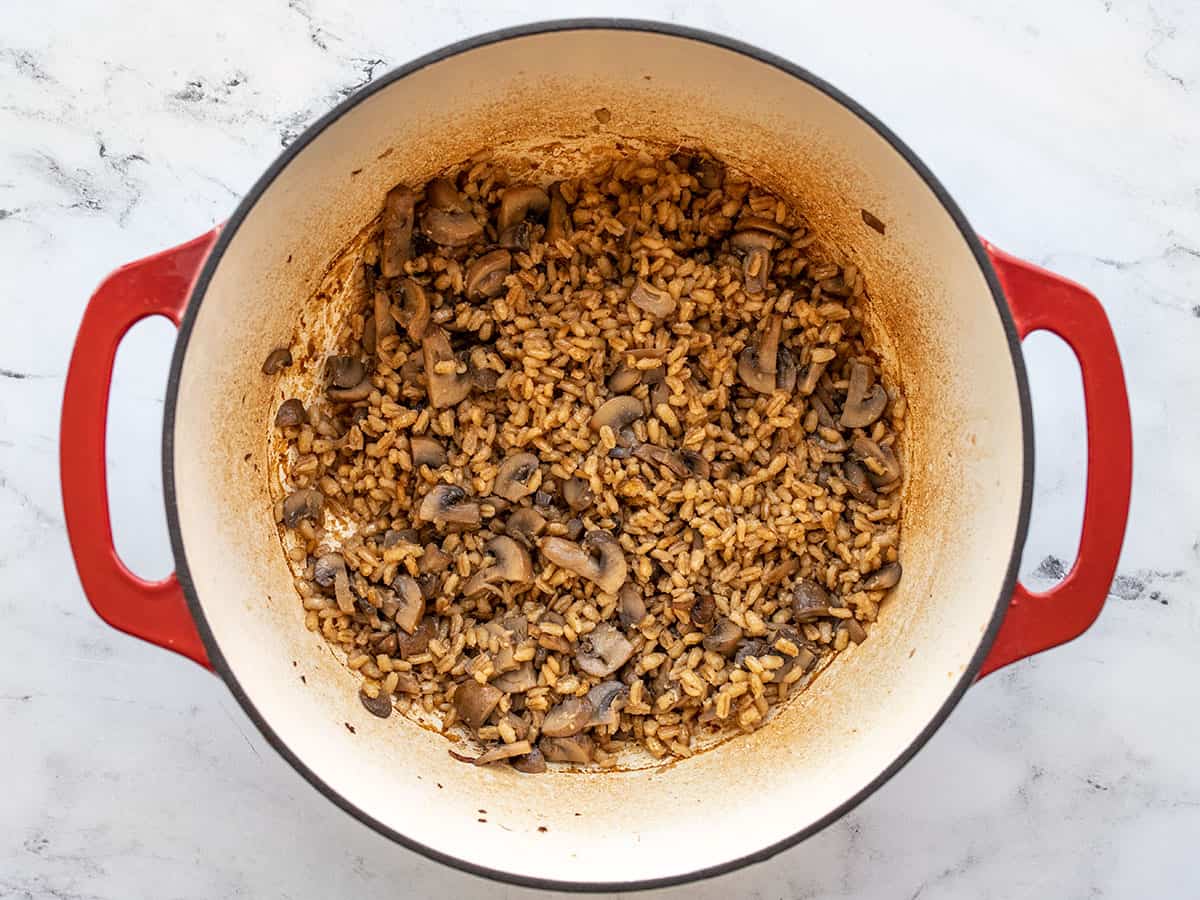 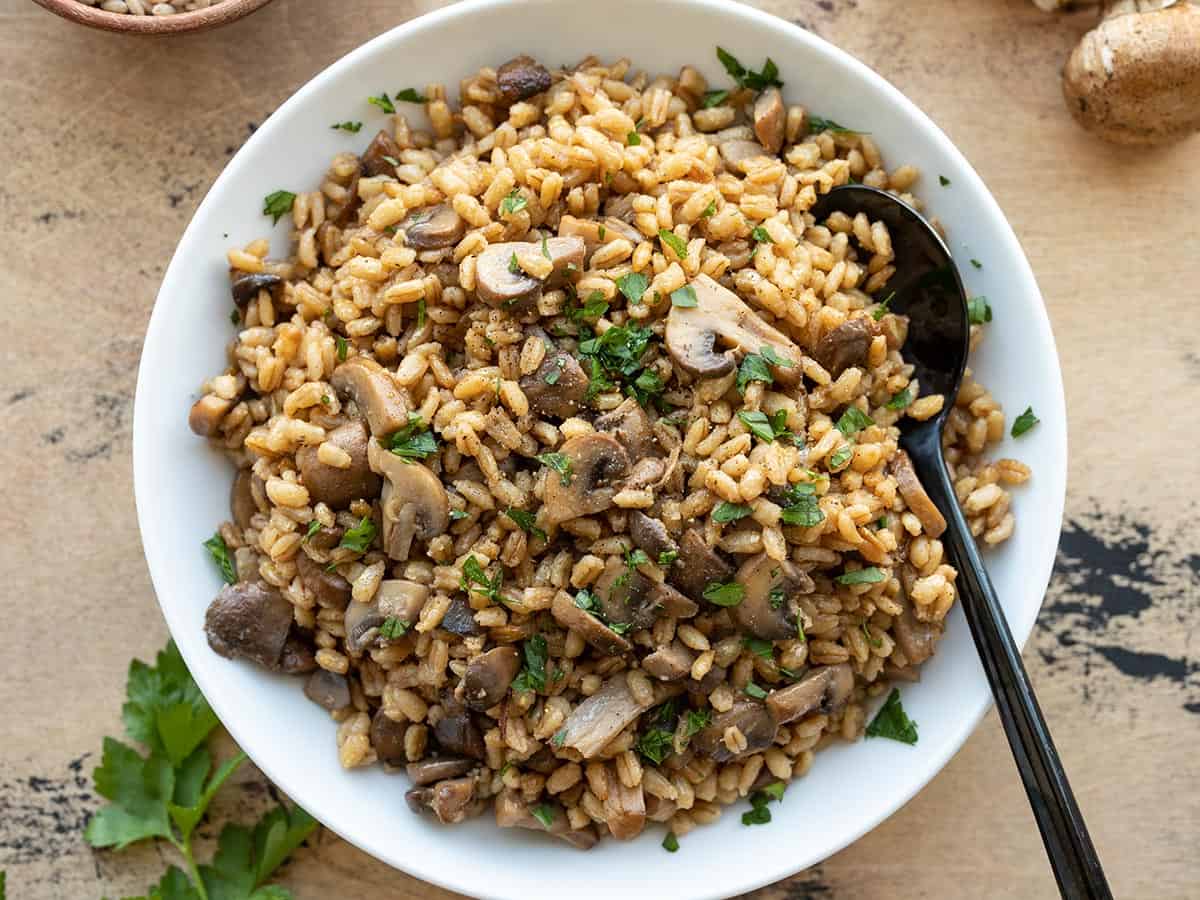 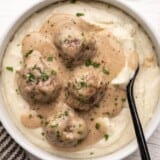