Simple homemade sauces (or glazes) are your secret weapon in the kitchen. They’re the easiest way to turn a boring piece of meat into something really mouthwatering and amazing. Case in point: Honey Mustard Pork Chops. This particularly awesome sauce is a mix of honey, Dijon mustard, a little mayo for creaminess, and a few spices. Smear that awesome sauce on a some pan seared pork chops, pop them in the oven to heat through, and then finish them off with a few minutes under the broiler. The end result is creamy, caramelized, honey mustard madness. Madness in a good way, of course.

Pork chops are delicate flowers. If you over bake them, they get tough and dry, so you really have to pay them some attention. This is where cooking intuition comes in handy. I’ve provided a general estimated bake time in the recipe below, but the total time needed to get the internal temperature of the pork chops up to 145ºF will vary depending on several factors. The thickness of your pork chops will greatly determine how long they need to bake, as will the amount of time they spent in the skillet while searing. The longer they’re in the skillet, the less time they’ll need in the oven. So keep these things in mind as you cook your chops and I wish you all the most juicy and tender pork chop success!

Can I Use Boneless Pork Chops?

Yes, you can achieve something similar with boneless pork chops and a slightly altered technique. The recipe below is written for bone-in pork chops, which take longer to cook than boneless chops. If using boneless chops you can shorten the bake time considerably. Keep your meat thermometer handy so you can test their temperature and prevent overcooking. If you’re using thin boneless pork chops, you may not even need to bake them after searing. Simply slather the seared chops with the sauce right in the skillet and let the sauce reduce a little bit to more of a glaze consistency. Either way, make sure they reach an internal temperature of 145ºF.

What to Serve with Honey Mustard Pork Chops

I served my Honey Mustard Pork Chops with some Roasted Brussels Sprouts and roasted sweet potatoes. Because they cooked at different temperatures from the pork chops, I cooked the vegetables first, then lowered the oven’s temperature before adding the pork chops. Make sure the oven is all the way down to the correct temperature before baking the pork chops, so you don’t accidentally over cook them! :) Or you could pair it with something super simple and a little lighter, like Simple Sautéed Vegetables or Lemon Garlic Roasted Asparagus, and some Seasoned Rice. 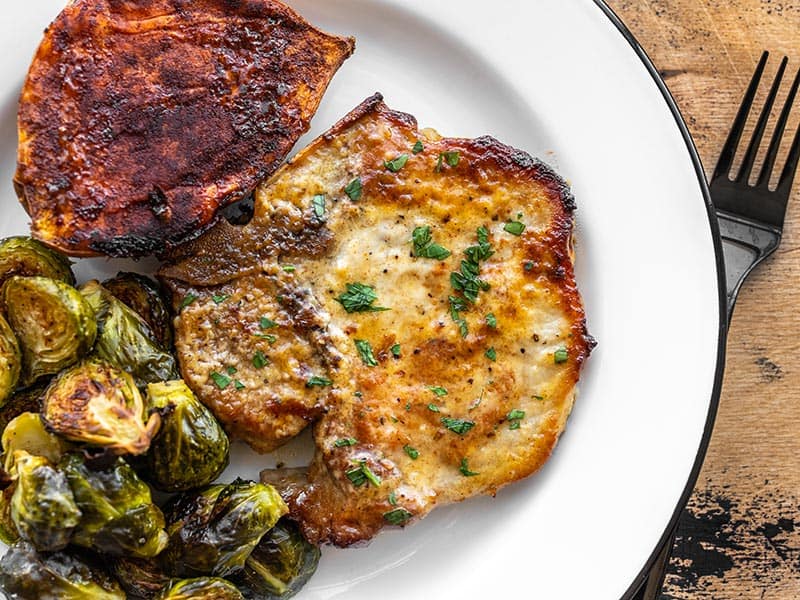 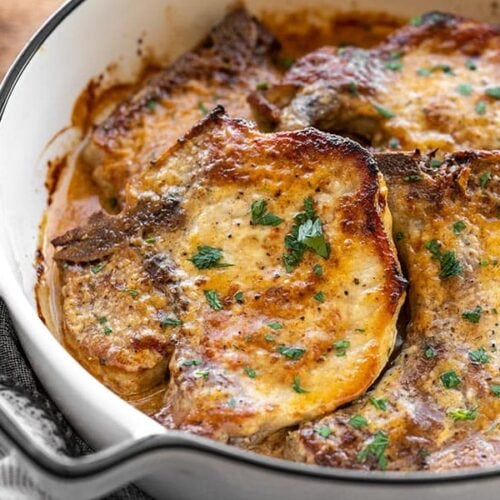 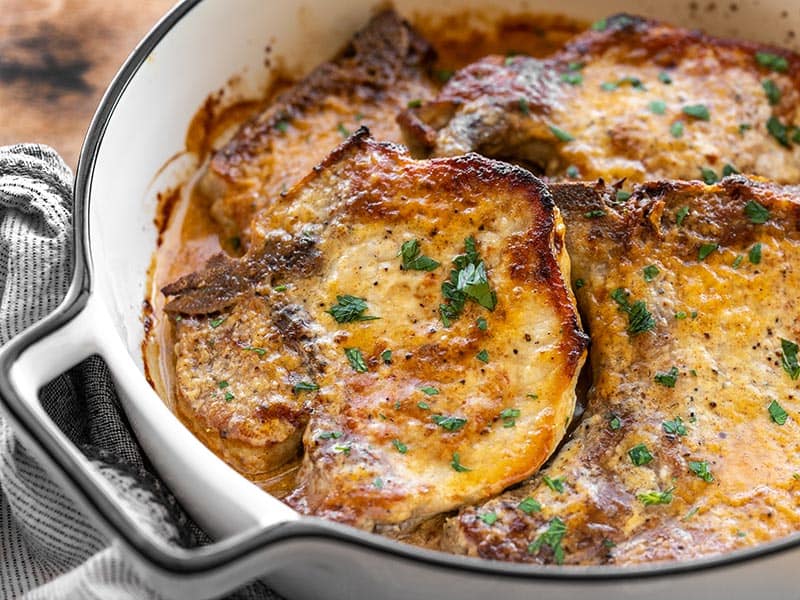 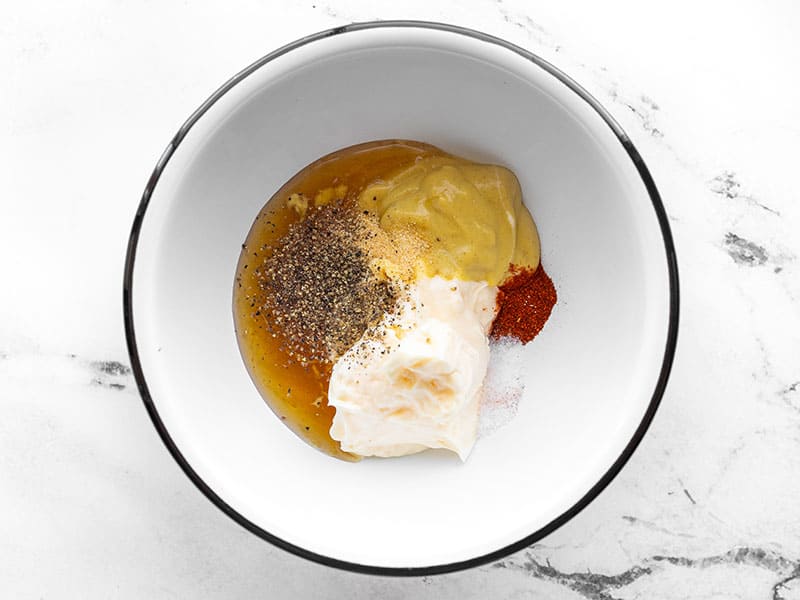 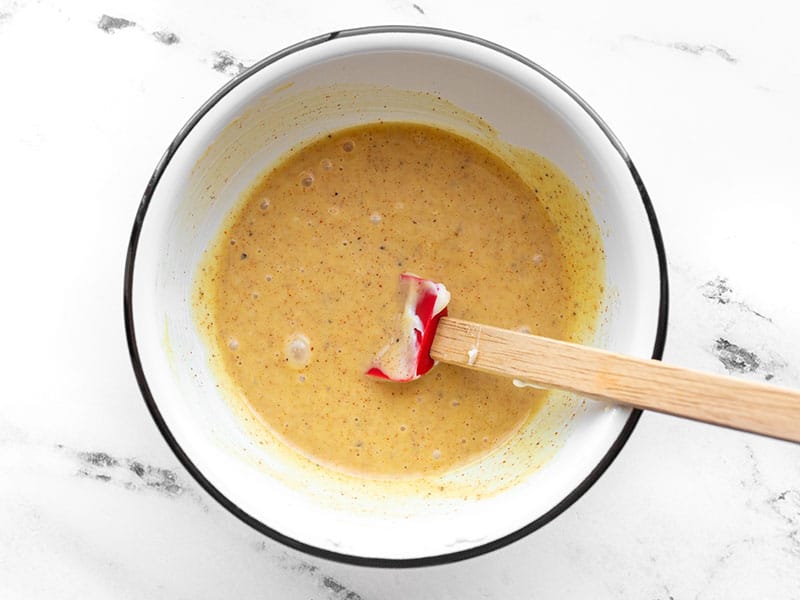 Then you have a really delicious honey mustard sauce that you will have to restrain yourself from licking off the spoon. Set it aside and try to forget about it for a minute. 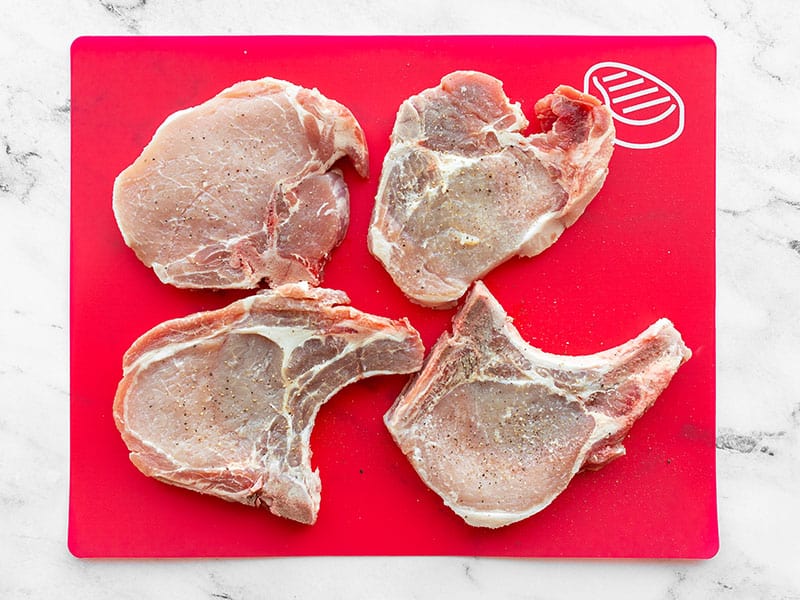 You’ll want four thick-cut bone-in pork chops for this recipe. Try to get pork chops that are 3/4 to 1-inch thick. The pork chops I used today are about ¾-inch thick. Preheat the oven to 350ºF. Use a paper towel to dry off the surface of the chops (this helps them sear better), then season each side with a pinch of salt and some freshly cracked pepper. 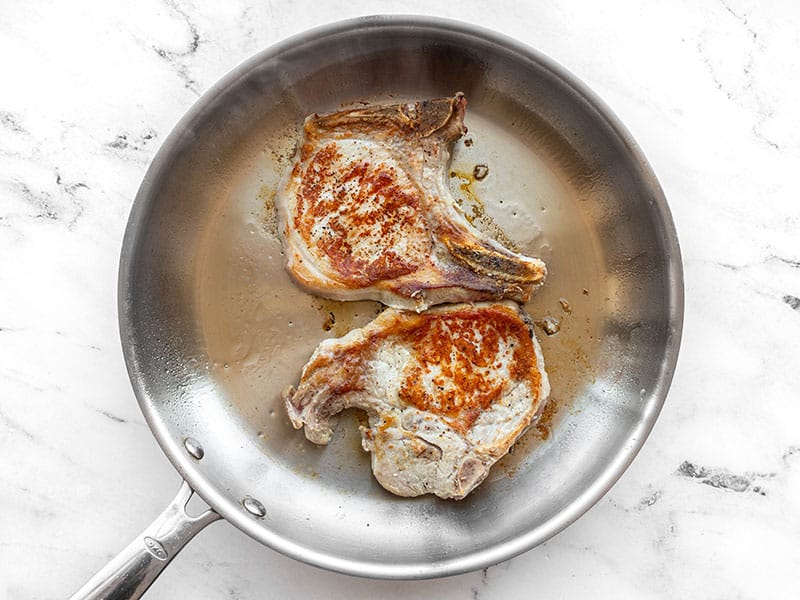 Heat one Tbsp cooking oil in a heavy skillet over medium-high heat. Make sure the skillet and oil are very hot, then add two chops at a time and cook until golden brown on each side (about 3 minutes per side). If it’s taking longer than about 3 minutes to get a nice brown color, make sure you reduce the baking time to compensate because the pork chops will already be more cooked when they go into the oven. 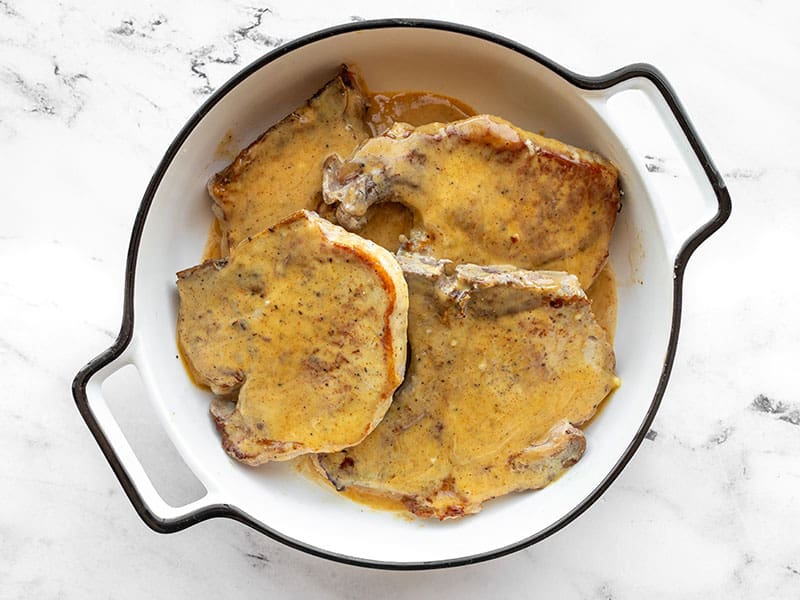 After browning the chops, place them into a casserole dish (it’s okay if they overlap just a little). Smear the honey mustard sauce over both sides of the pork chops. Bake in the preheated oven for 20-30 minutes, or until they reach an internal temperature of 145ºF (about 20 min for ¾-inch thick, or closer to 30 for 1-inch thick chops). 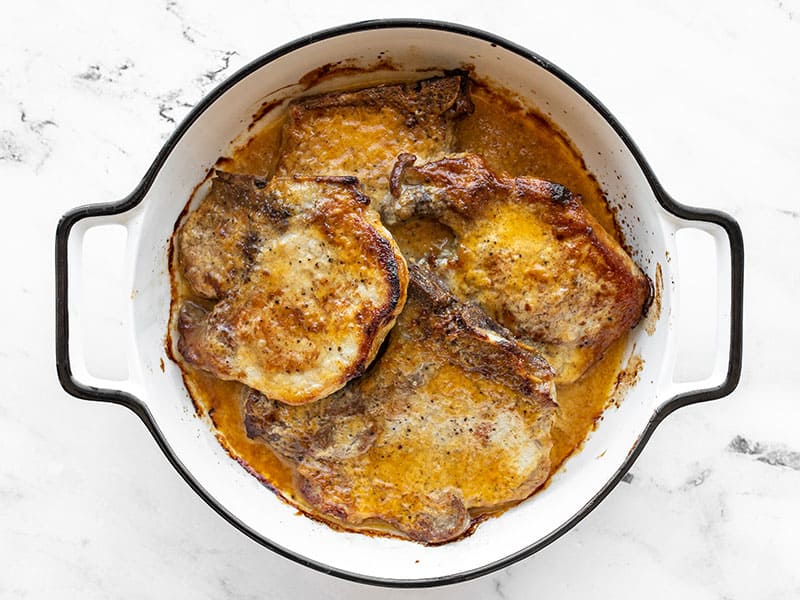 Finish them off with just a few minutes under the broiler for maximum browning action (I did not move the oven rack, I simply switched the setting from bake to broil and kept an eye on them). 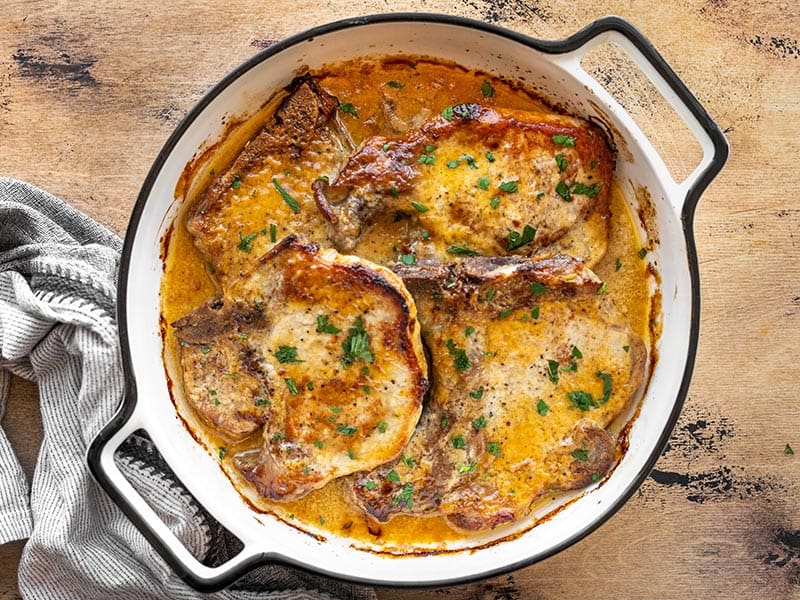 So yummy! I garnished with a little parsley for color, but it’s not needed to flavor the honey mustard pork chops.