Pan sauces are the easiest way to turn a boring cut of meat (pork chop, chicken breast, etc.) into a restaurant quality, fancy-pants meal. They’re fast, easy, and help clean off that brown stuff that’s stuck to the bottom of your skillet (that “stuff” is actually called “fond” and it’s quite flavorful). So, if you haven’t tried making a pan sauce yet, I suggest it be moved right to the top of your “to do” list.

For this particular pan sauce I combined blackberry jam, rich and tangy balsamic vinegar, a little butter for richness, and dried sage. The juices and browned bits from the pork give the sauce a savory base and that umami flavor that makes you want to keep coming back for more. Seriously, though, I was practically drinking this sauce… One spoonful at a time, of course. That pork chop was just there to help me sop up more of the amazing sauce.

So, wanna see how Blackberry Sage Pork Chops are born? 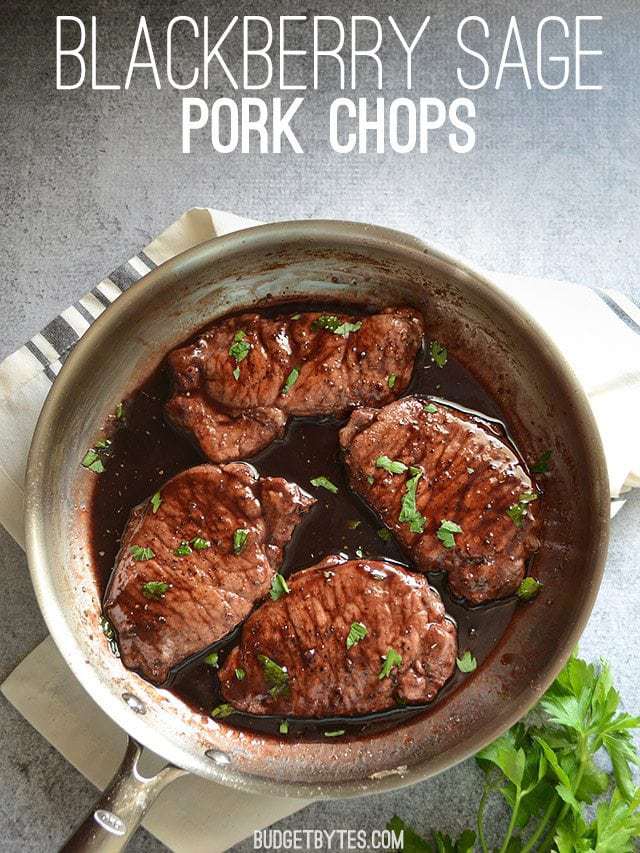 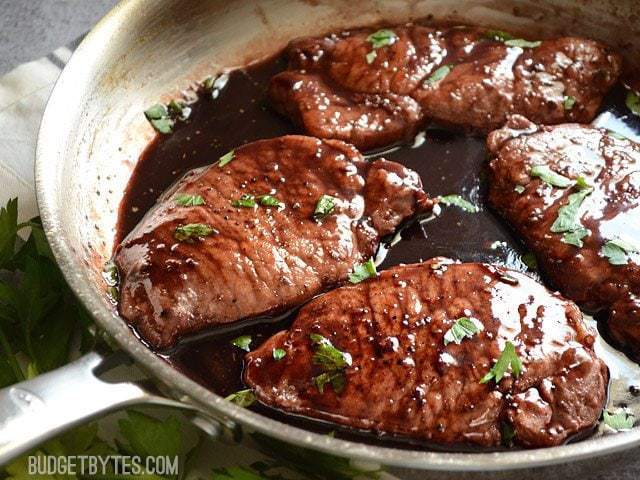 If you're using thick cut pork chops, they will likely not be cooked through after browning in the skillet. After returning them to the sauce, let them simmer in the sauce until cooked through. 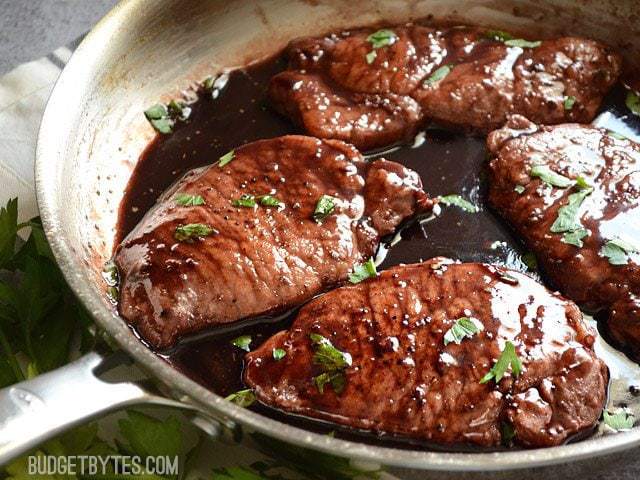 Chopped parsley added for color and photographic effect only. 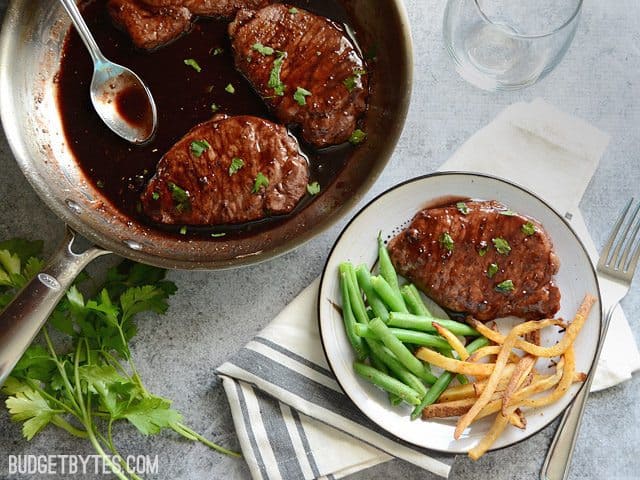 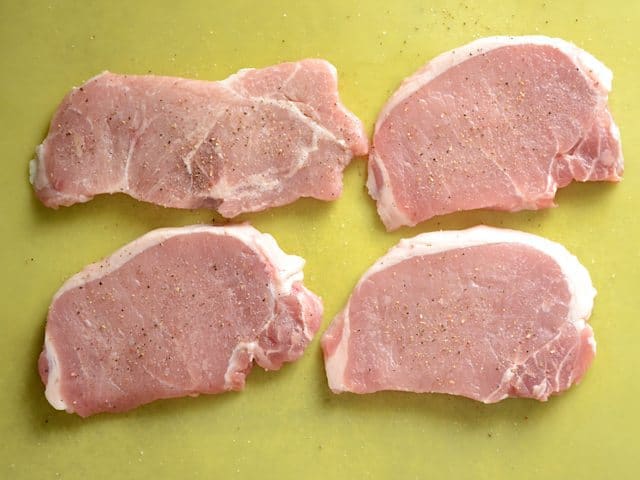 Start with four thin, center cut pork chops, about one pound total. Let the chops warm for about ten minutes on the counter. Cold chops don’t sear quite as well as room temperature chops. Pat the chops dry with a paper towel (this also aids searing) and season each side with a pinch of salt and pepper. I’m not sure why that one chops is so different, unless it’s not actually a chop… I think I’ve been had. 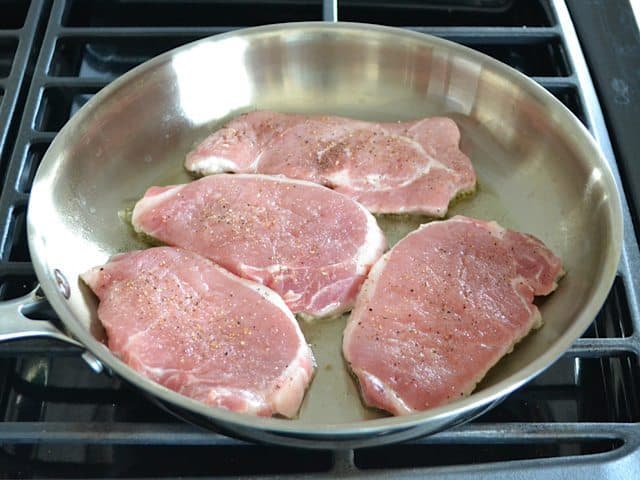 Heat one tablespoon of olive oil in a large skillet over medium to medium-high heat. You want the oil hot so that it looks a little wavy on the surface, but not smoking. Once the oil is hot, add the pork chops and let them brown on each side. The oil should be hot enough that this happens fairly quickly (3-5 minutes). If the heat is too low, they’ll let off a lot of moisture and become kind of tough… 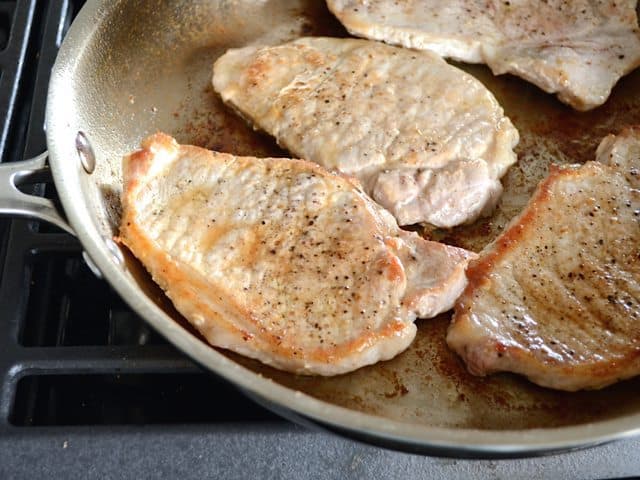 I’ll admit, my heat was a little too low (see how blonde that one in the back is?), but it’s all good because the sauce is so phenomenal that I didn’t care. Let the chops brown on each side then remove them to a clean plate. 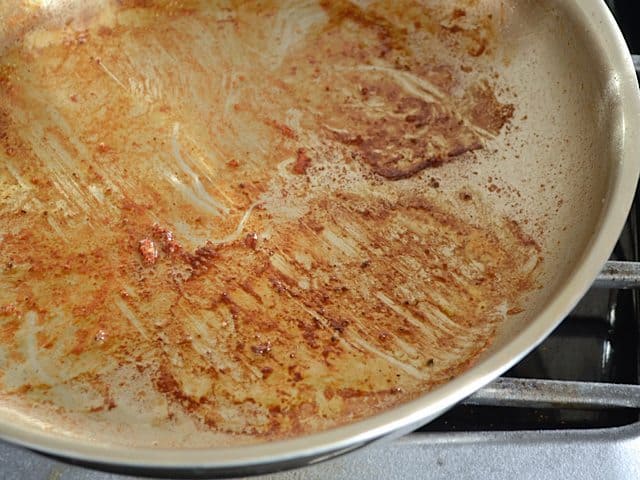 What you’re left with is a skillet full of this brown gunk that looks like a nightmare to clean up, right? Wrong. This gunk is called “fond” and it has all sorts of magical flavor. It will get dissolved into the sauce, leaving not a trace behind to be scrubbed off later. Take the skillet off the heat for just a couple of minutes to cool down a bit. We don’t want to burn the butter. 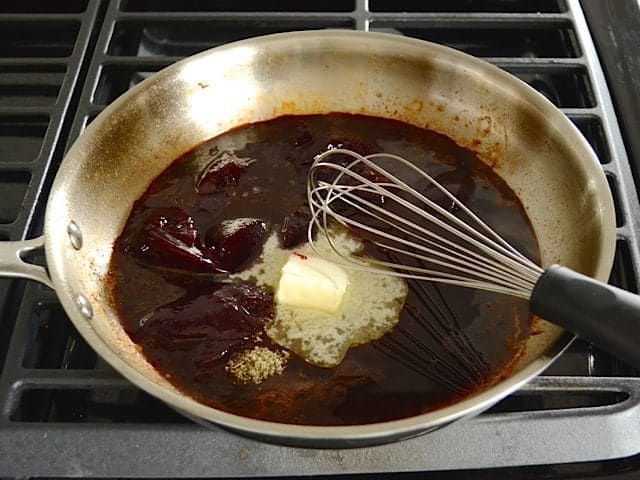 Once the pan has cooled off just a touch, add 1/2 cup blackberry jam (jam or preserves, not jelly please), 1 Tbsp butter, 2 Tbsp balsamic vinegar, 1 Tbsp water, and 1/2 tsp dried sage. Place the skillet over low heat and whisk until all the ingredients are dissolved and all the browned bits stuck to the bottom have dissolved in as well. Turn the heat up to medium and let it simmer until it thickens. It should be thick enough to coat a spoon. Taste the sauce and add a pinch of salt if needed (I added 1/8 tsp). 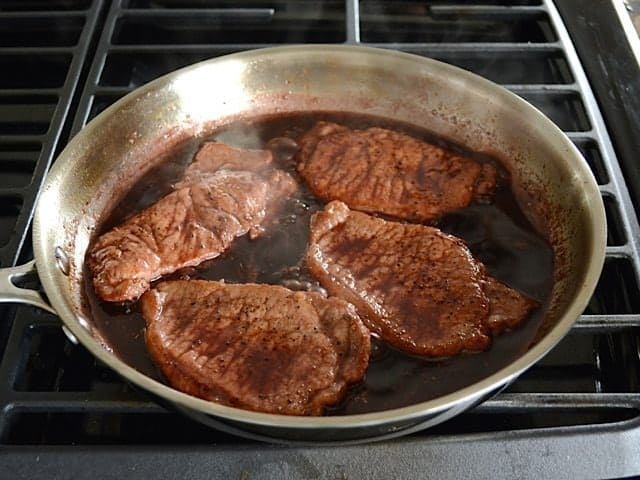 Add the chops back to the sauce, coating each side. Add any juices or drippings that accumulated on the plate as well. Let the chops warm briefly in the simmering sauce, then serve. Thin cut pork chops cook very quickly, so the browning step likely cooked them all the way through. If you’re using thicker cut chops, you can let them simmer in the sauce for a little while until they are done all the way through.

I added a little parsley to the Blackberry Sage Pork Chops for color in the photos, but it’s not needed for the recipe. If you happen to have fresh sage or basil, though, that would of course be phenomenal. 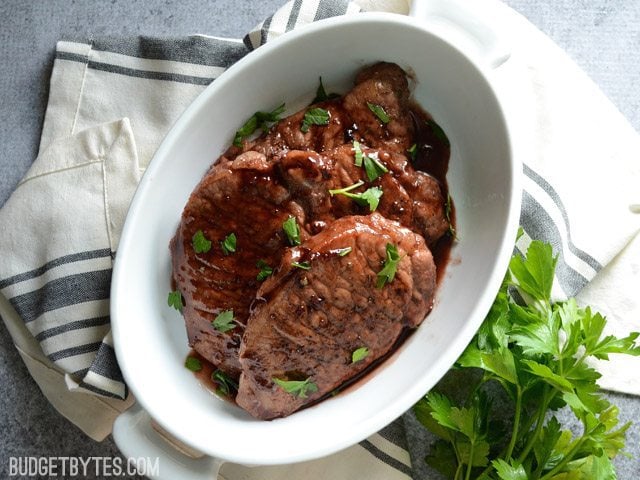 Make sure to spoon that delicious blackberry sage sauce over top of the pork chops after serving. *drool*