Mmmmm… I LOVE spinach pie. Whenever I eat at Greek restaurants, I always make sure to order some spanikopita. I love the flakey crust and the rich, warm, spinach filled interior. Popeye totally knew what was up.

This spinach pie isn’t really Greek flavored, but I love it all the same. There are many, many ways to make a spinach pie and this weekend I was most interested in finding the fastest, easiest route to this spinach heaven.

My mom made baklava fairly often when I was growing up and ever since watching her wrestle with those finicky phyllo dough sheets, I’ve never wanted to go near them. So, for this recipe I chose puff pastry. It’s much thicker and way more forgiving than phyllo, but you still get a nice flakey crust. Puff pastry is definitely not inexpensive, but most of the other ingredients in this recipe are, so the overall cost per serving remains low. Puff pastry can be found in the freezer section, usually near frozen fruit and other ready to eat desserts. For this recipe I only used one sheet out of the box. The other sheet can be wrapped tightly and re-frozen for later use.

You can make spinach pies in a square, or as individually folded rectangles, but I like this easy “fold over” pie dish method. No cutting the dough, simply roll it out, fill it, and fold it over top to make the top crust. Super easy.

I stuck to a basic cheese and spinach filling, but this recipe is just asking for a million variations. Add some feta cheese for a Greek flare, green onions or other fresh herbs for a fresher flavor, or you can even try adding something tangy like sun dried tomatoes. Of course, more ingredients mean higher cost, so try to use ingredients that you have laying around waiting to be used up. 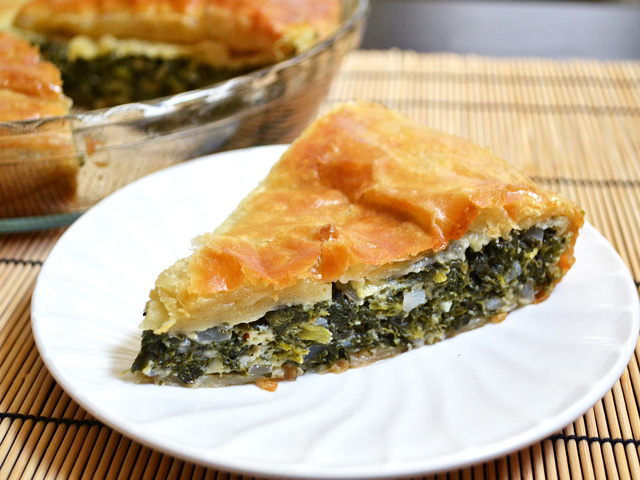 Allow both the puff pastry and frozen spinach to thaw in the refrigerator over night.
See how we calculate recipe costs here.
Tried this recipe?Mention @budgetbytes or tag #budgetbytes on Instagram!
Nutritional values are estimates only. See our full nutrition disclosure here.The equipment section above contains affiliate links to products we use and love. As an Amazon Associate I earn from qualifying purchases. 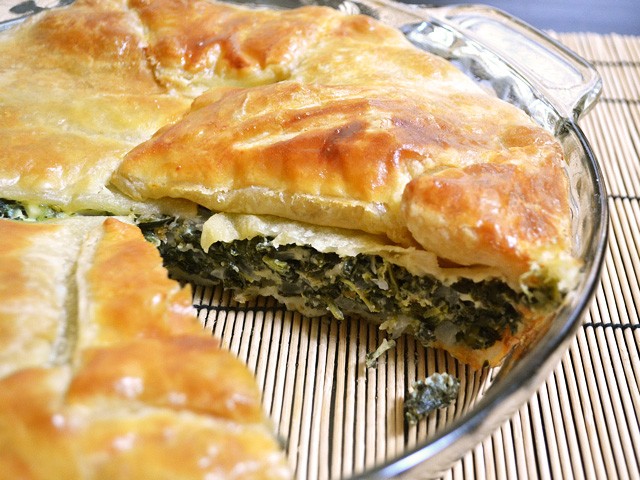 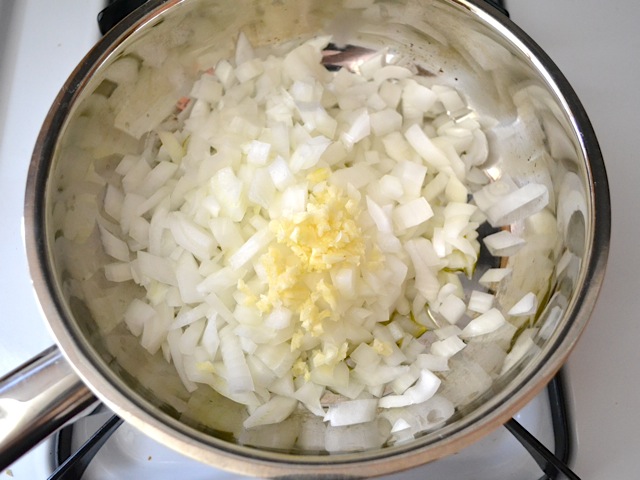 Start by cooking down the onions and garlic. This serves to remove moisture because moisture is the enemy of puff pastry. 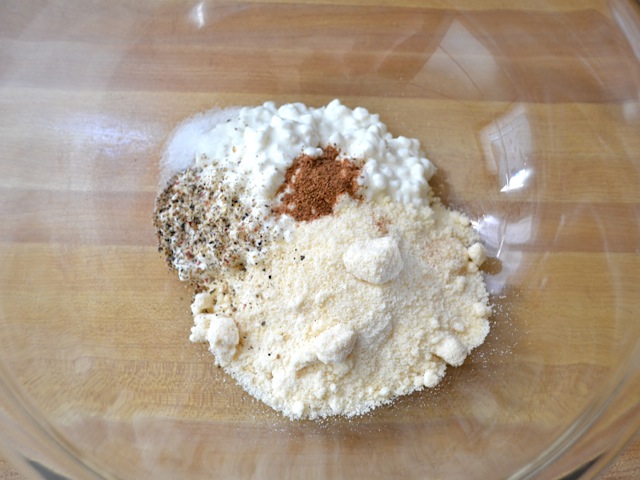 While the onions are cooking, mix together the rest of the filling. In a bowl combine the cottage cheese, parmesan, salt, pepper, and nutmeg. Stir well. 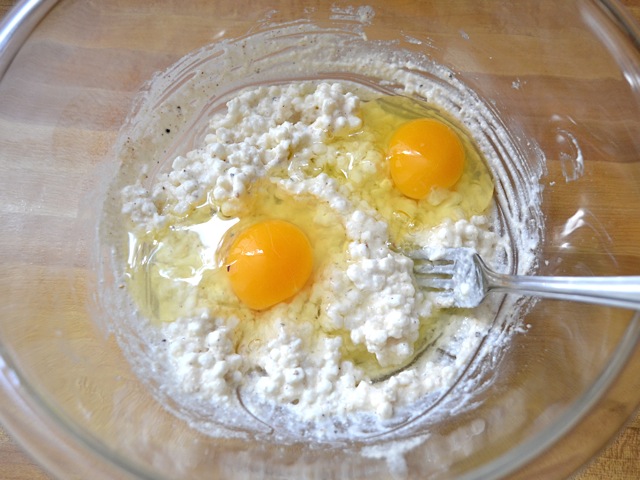 You can actually stir the eggs in at the same time as the cheeses, but I wanted to taste the mixture before I added in raw egg. So, I just added them after. 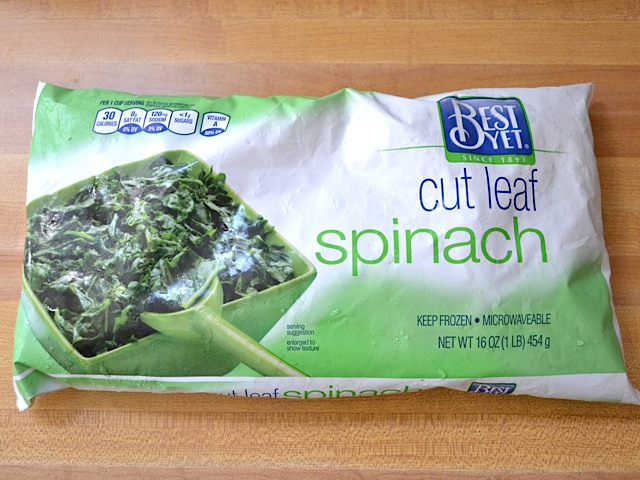 You’ll want one pound of frozen chopped spinach. Make sure to let it thaw before you begin. 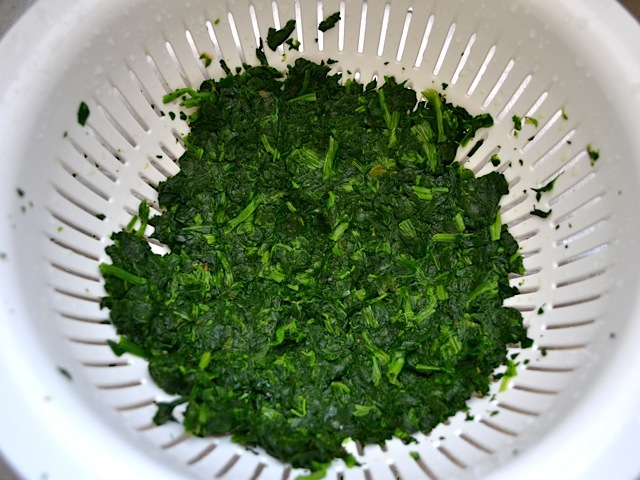 Place the thawed spinach in a colander and press it against the sides to squeeze out the water. I went a step further and picked up handfuls and squeezed as hard as I could. Again, moisture is the enemy of the puff pastry, so you need the spinach to be pretty dry. 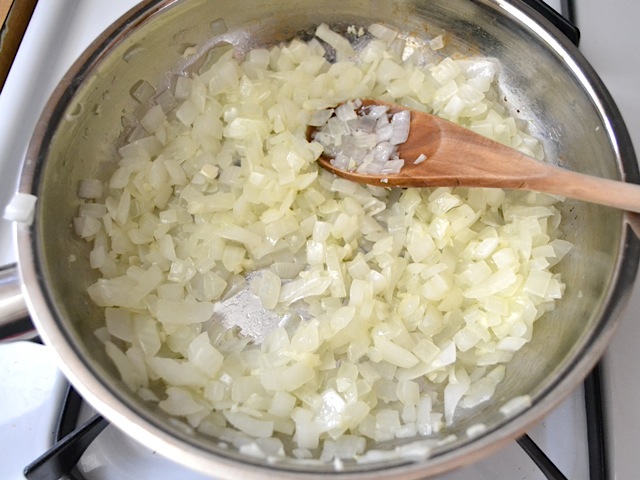 By now the onions have cooked down, are soft, and transparent. 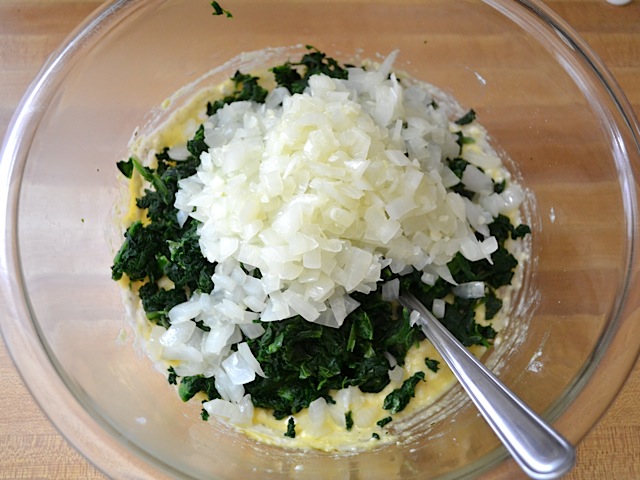 Combine the cheese/egg mixture, the squeezed spinach, and the cooked onions and garlic. 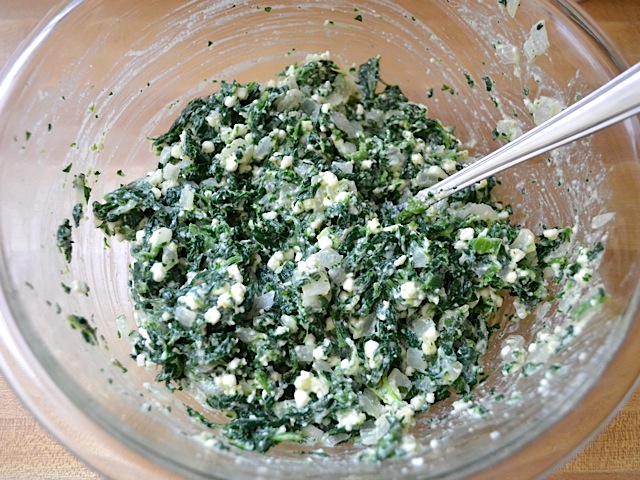 Mix it all together really, really well. This is your delicious spinach pie filling. 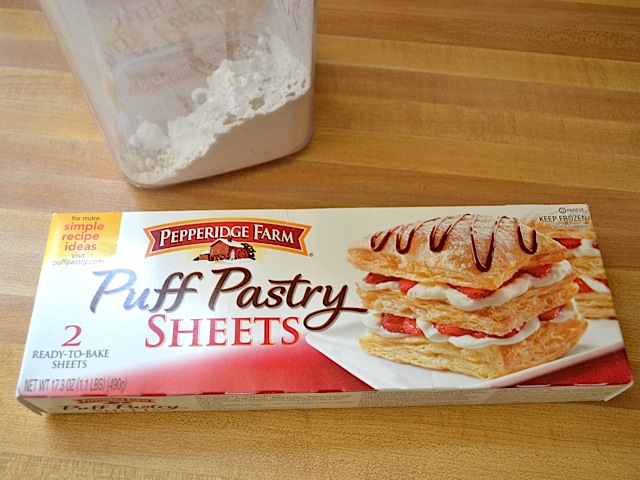 This is the puff pastry I used. You can find it in the freezer section near the frozen fruit. Make sure to put it in your refrigerator the night before so it can thaw. It’s kind of expensive (mine was $5 per box), but you’ll only be using half and the second half can be re-frozen (or used to make dessert, like I did!). 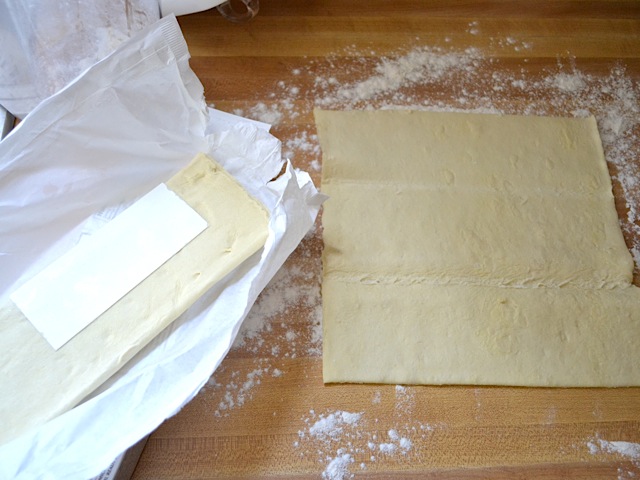 When you open the box of puff pastry, you’ll find two sheets, each folded into thirds. Dust your countertop with flour and unfold one sheet onto it. The other sheet can be wrapped tightly with plastic and refrozen. 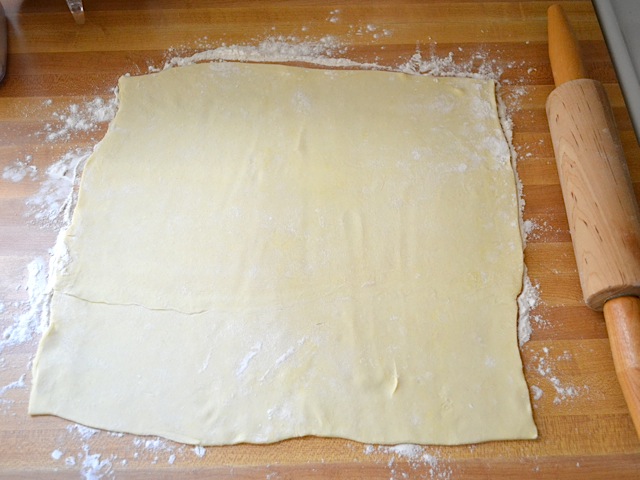 Roll the pastry dough out a bit until you have a 12×12 inch square. Go slowly and you’ll be able to maintain the square shape that it came in. 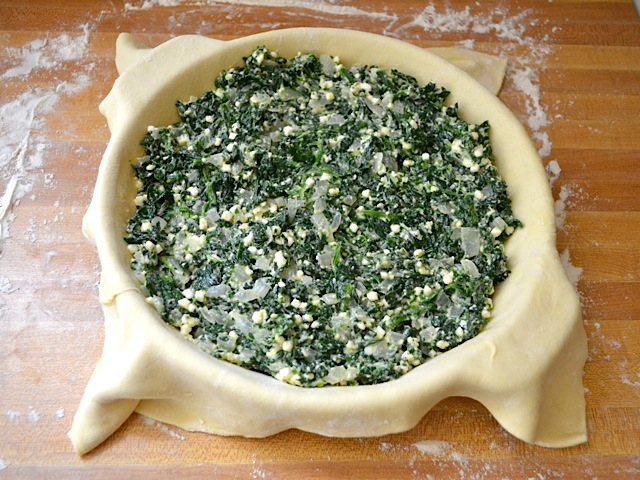 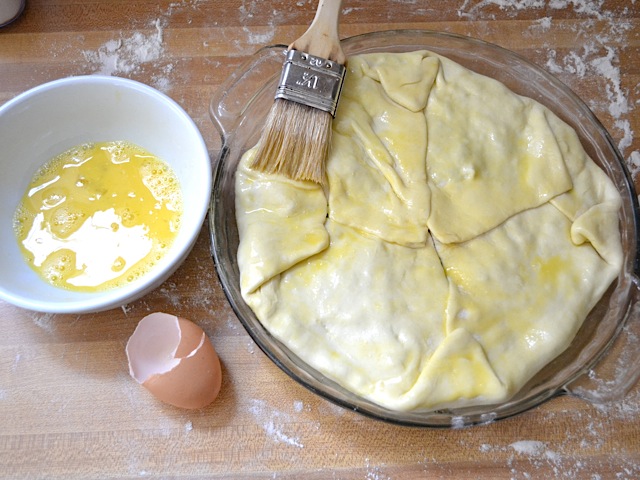 Take the points of the square pastry dough and fold them in over the top. It’s okay if they don’t reach so that all of the edges meet. In fact, it probably would have looked better if I didn’t roll mine out quite so big! If you’d like, whisk up a third egg and brush it over top. That will give it a nice brown, glossy appearance. 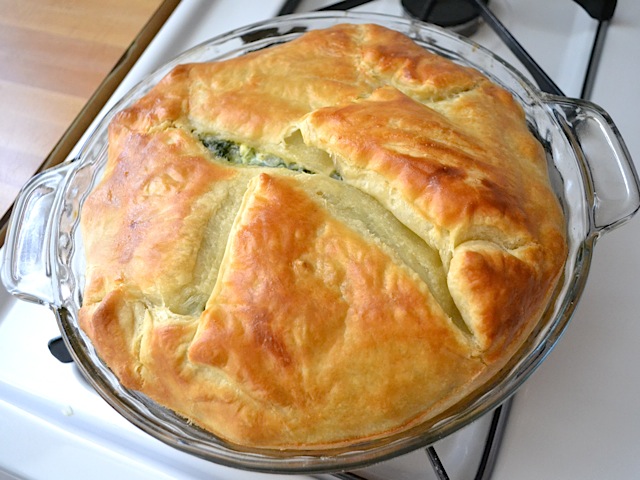 And then bake the whole thing in a preheated 375 degree oven for about 45 minutes or until the pie crust is fully puffed and is a nice golden brown. It won’t really start puffing until the last 15 minutes, so don’t get scared while watching through your oven window. Also, the center will puff last, so don’t take it out too early! I almost took mine out and then decided to leave it for 5 more minutes… it REALLY puffed a lot in those last five minutes! 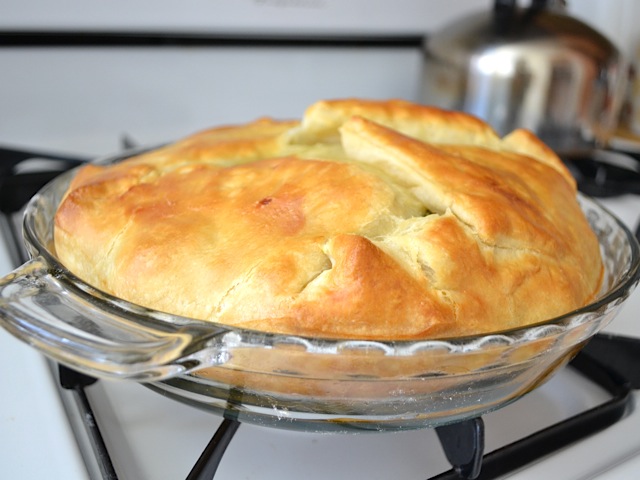 Here’s a side view so that you can see how it puffed up. Let the pie sit for about five minutes before you cut it. It will deflate some as it cools, so don’t let that surprise or disappoint you. 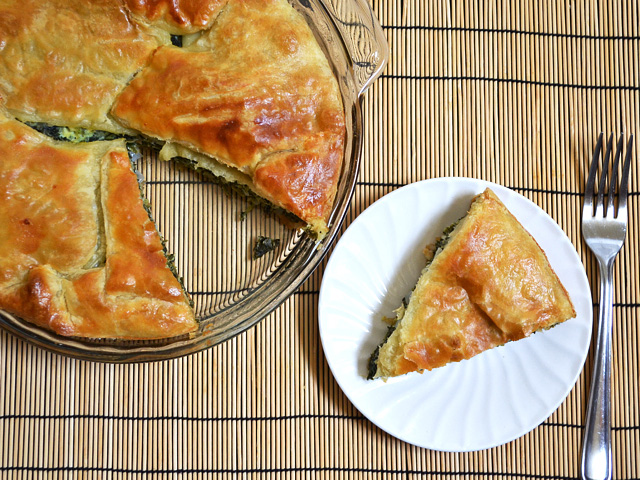 Cut the pie into 8 pieces and try not to eat them all. It will take strength. Great strength. 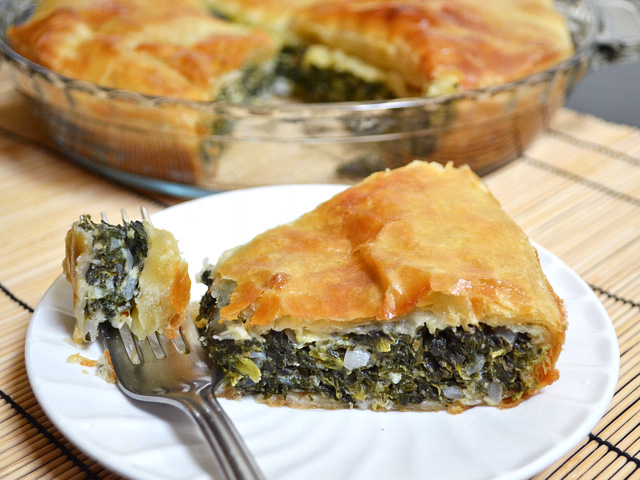