This Spinach Artichoke Grilled Cheese is totally indulgent. It’s like your favorite restaurant appetizer turned into a meal (because you were going to eat that spinach artichoke dip as your meal anyway, right?). I’ve taken a basic spinach artichoke dip recipe, tweaked the ingredients to be a little more like a melty grilled cheese than a gooey dip, then stuffed it between two pieces of my favorite homemade focaccia. It’s a golden brown, crispy, melty, gooey delight. 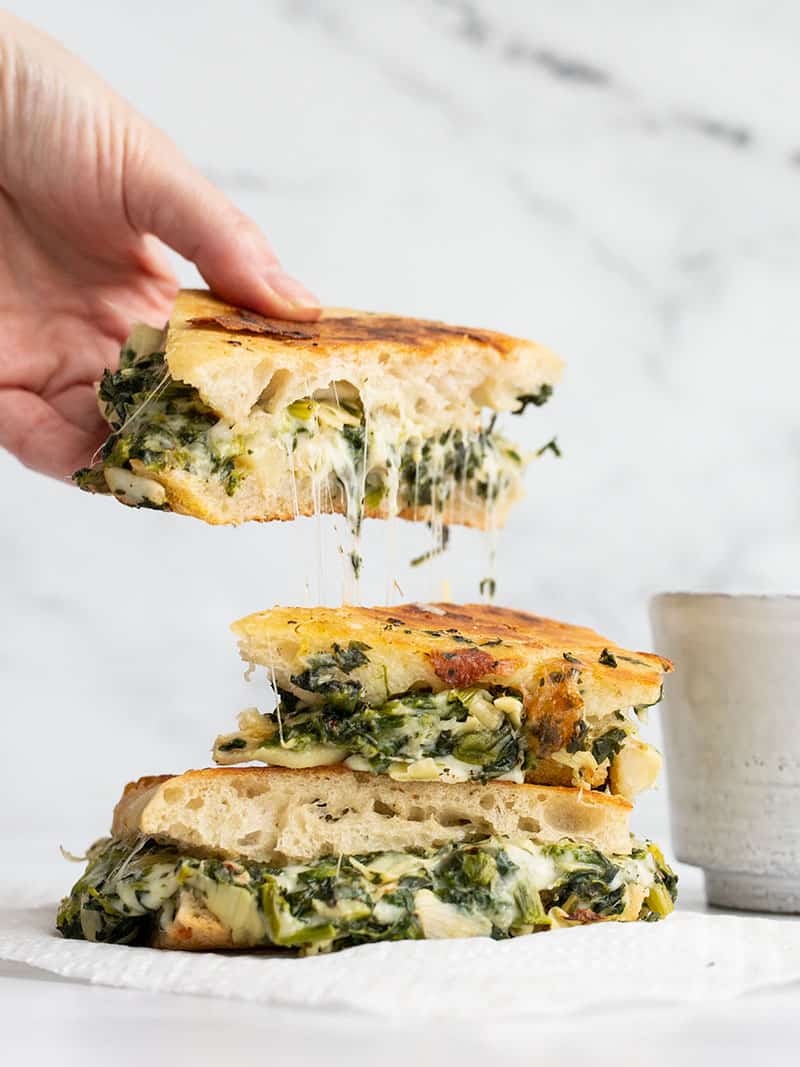 Is This a Melt or a Grilled Cheese?

Okay, so technically this type of sandwich is called a “melt.” A melt is a grilled cheese that has other ingredients added, like vegetables or meat, whereas a grilled cheese is a cheese-only grilled sandwich. While the difference between a melt and a grilled cheese often sparks heated debates, I want people to be able to find this recipe on the internet, and the data shows that people are searching for “spinach artichoke grilled cheese,” not “spinach artichoke melt” (literally zero Google searches for that term per month). The English language is fluid, and the use of the term “melt” is declining. So here we are!

Do I Have to Use Focaccia?

I made this sandwich with my homemade focaccia, but you can use any bread that you’d like. I love the focaccia because it’s really sturdy, which you want in order to hold up to the hefty filling, and it crisps up so well because of it’s olive oil soaked exterior.

If you’d like to use a different kind of bread, you’ll probably want to smear a little butter on each slice to get that nice golden brown crispy exterior. You can also stuff this filling into a tortilla and cook it up like a quesadilla!

Can I Use Fresh Spinach?

Yes, if you prefer to work with fresh spinach, simply chop it up and sauté it briefly in a skillet to cook out some of the moisture, then continue with the recipe as stated.

How Much Does This Recipe Make?

This recipe makes about 2 cups worth of sandwich filling, which will get you either two large grilled cheese sandwiches, or four smaller sandwiches.

Can I Make the Spinach Artichoke Filling Ahead?

Live alone? Don’t feel pressured to eat all the Spinach Artichoke Grilled Cheese filling in one sitting (No, that’s not a dare). You can keep the sandwich filling in the refrigerator for about 4-5 days and make sandwiches or quesadillas as you see fit. 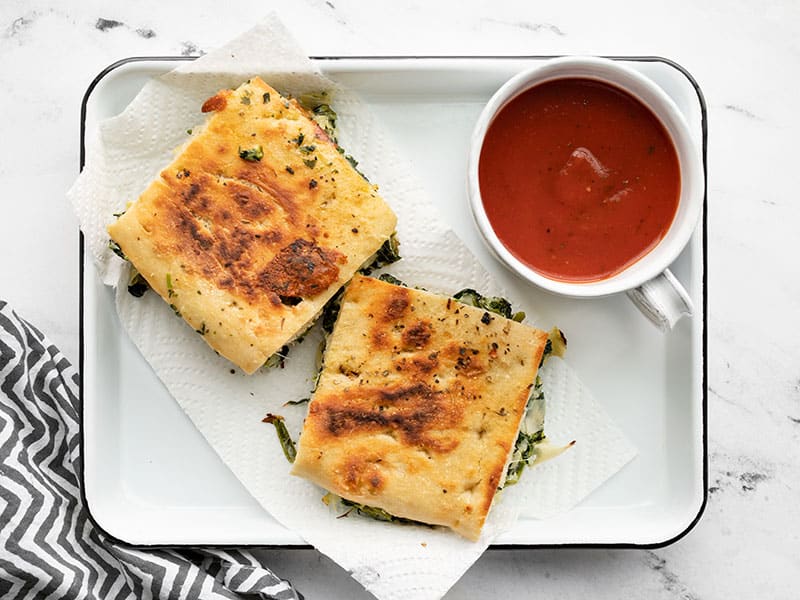 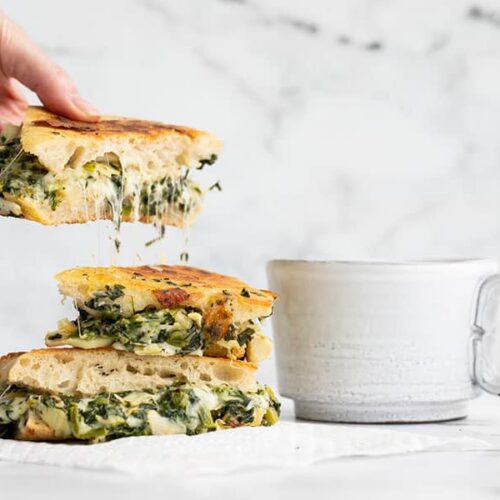 *If you're using focaccia, you may not need to butter the slices. See the text above the recipe for other bread options. 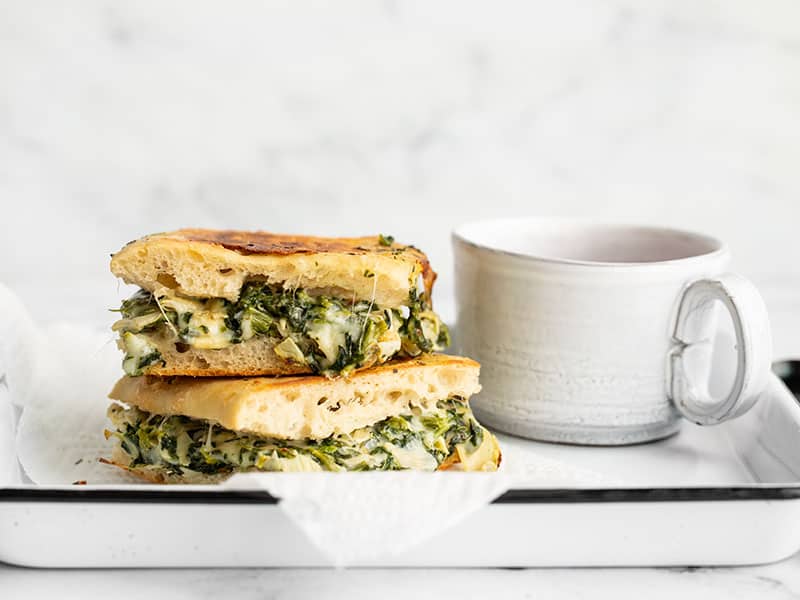 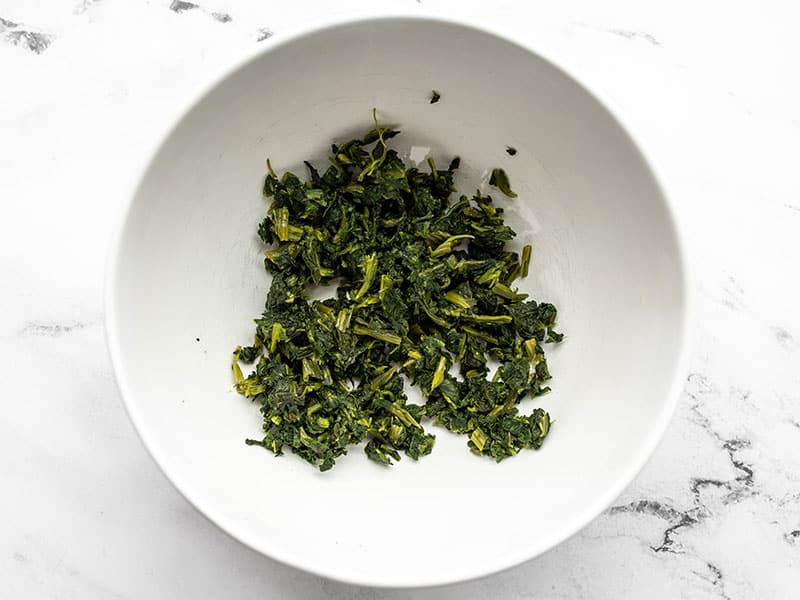 Begin with about 1/4 lb. frozen chopped spinach. Thaw the spinach, then squeeze out as much moisture as possible. You’ll want about 1 cup unsqueezed, or 1/2 cup after squeezing dry. 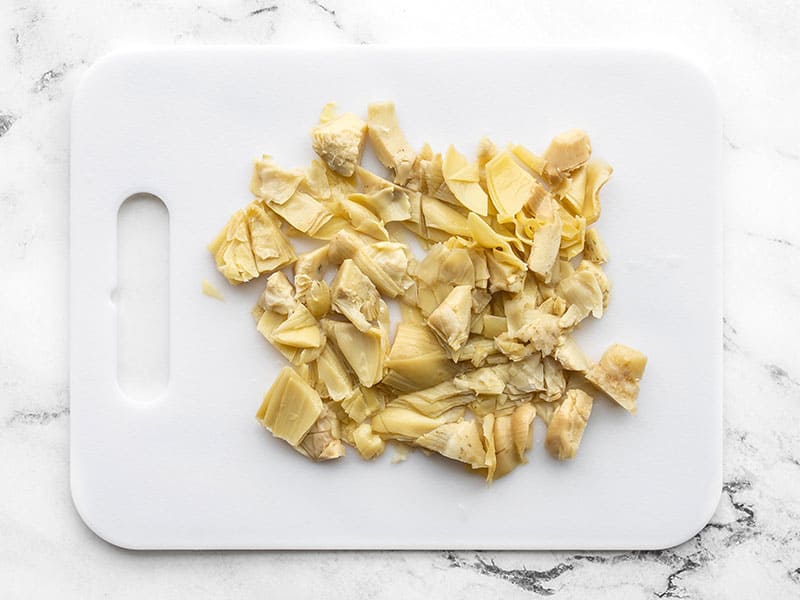 Drain one 1/2 of a 12oz. jar of quartered artichoke hearts (packed in water), then chop them into small pieces. 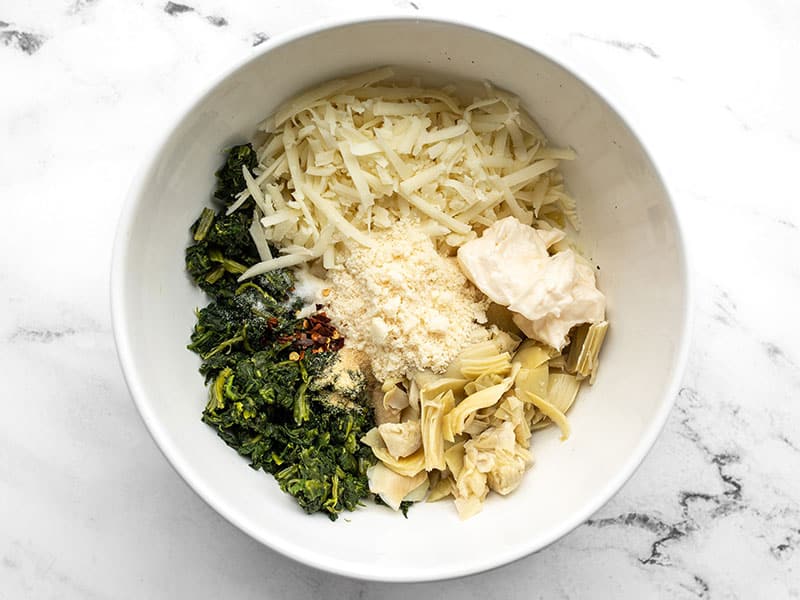 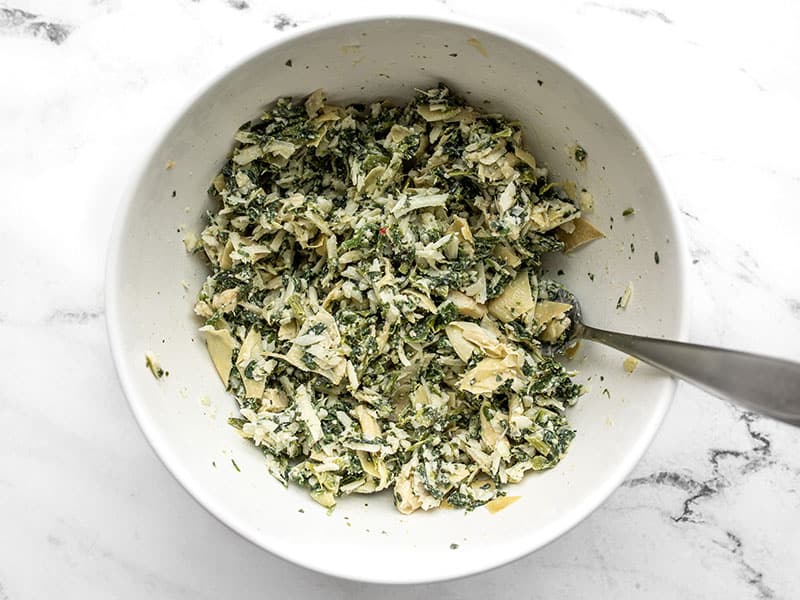 Stir the ingredients until they’re evenly mixed. There should be just enough mayo to make the ingredients all stick together. You can refrigerate the filling at this point and use it later, or throughout the week. 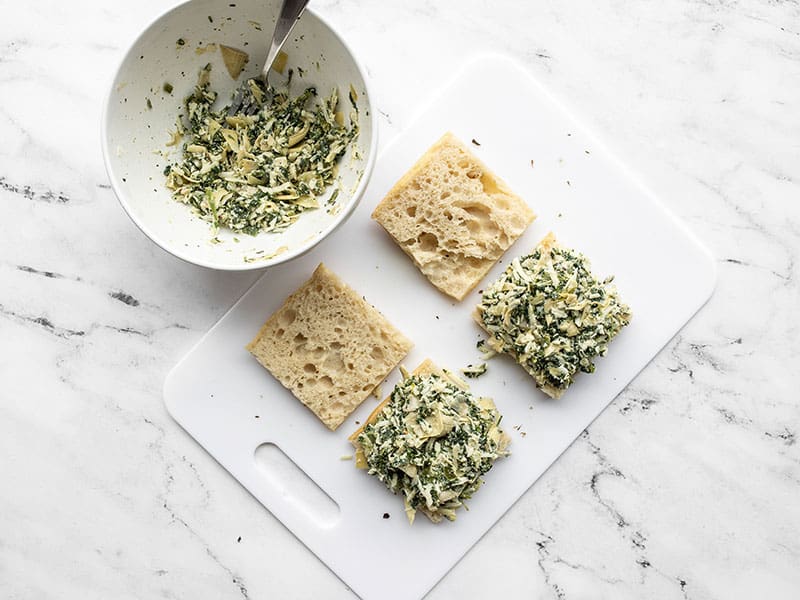 If you’re using focaccia, slice the pieces in half so you have a top and bottom piece. If you’re using regular bread, you’ll want to spread a little butter on the outsides of each piece of bread. Fill each sandwich with about 1 cup of the filling. 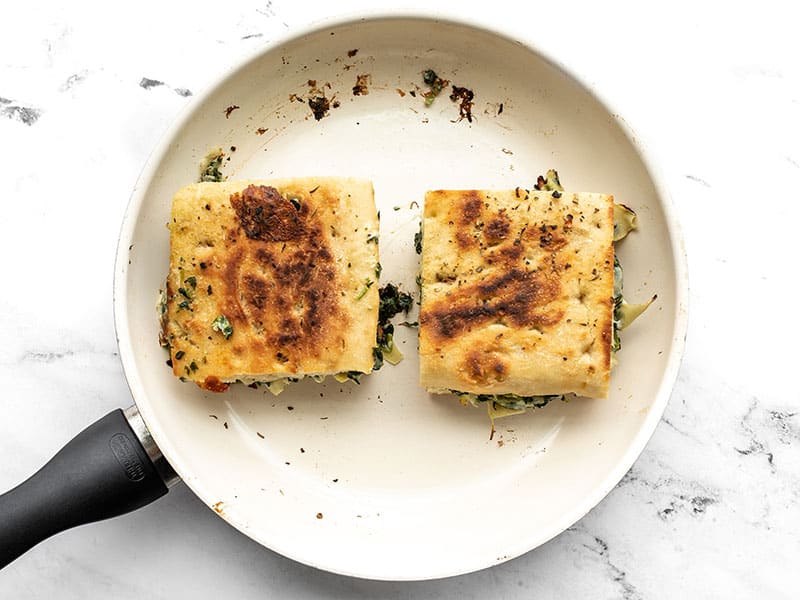 Cook the sandwiches in a large skillet over medium low heat until each side is golden brown and the filling is melted. 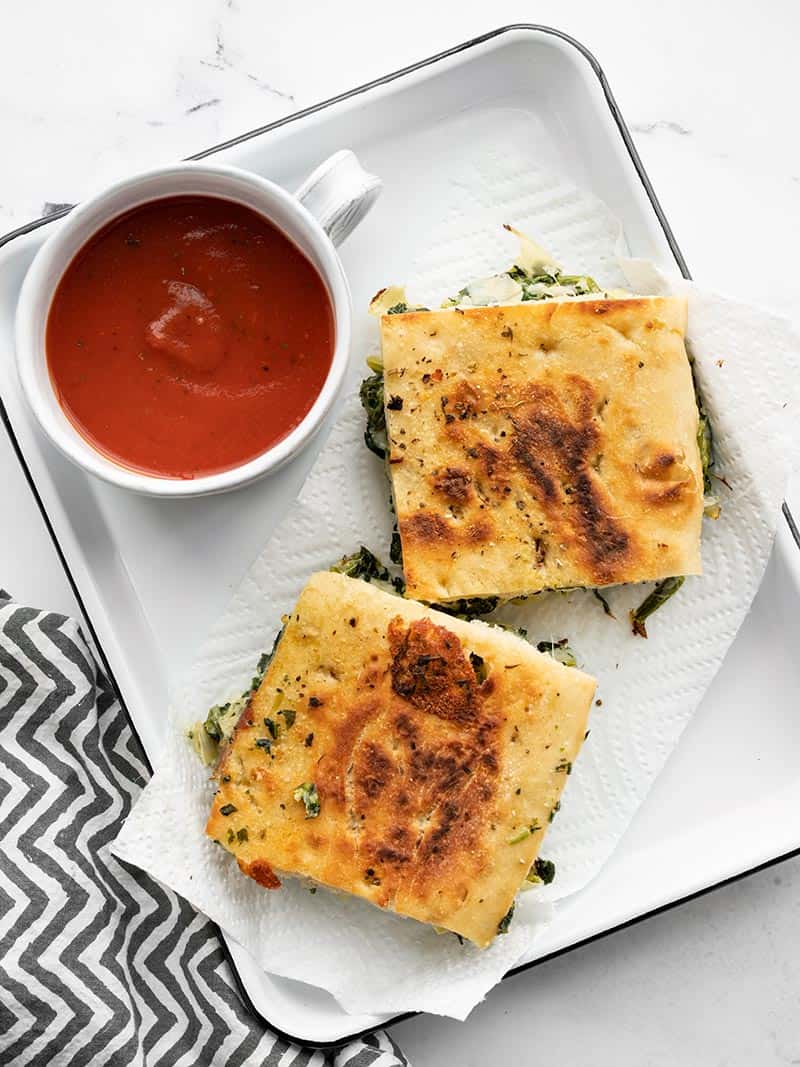 Posted in: Quick Recipes, Recipes under $5, Sandwich Recipes, Under $3 per serving, Vegetable Recipes