In effort to use up some of the things stored in my freezer and pantry, I took a quick survey of what I had available. I had a left over ham hock from making Collard Greens, a bag of chopped celery and bag of chopped carrots from when I made Garden Tomato Soup. Although it’s still over 90 degrees outside in Louisiana, I know fall is starting to creep in for many of you. One of my favorite soups EVER is split pea. I love it so much that I even go ga-ga for the kind that comes out of a can!

Making it from scratch was a sinch, especially since I already had the carrots and celery chopped and ready. Plus, since I had all this stuff in the freezer and fridge, all I had to buy to make this soup was a bag of peas and a potato. Yeah, this week’s grocery receipt was SMALL.

If you want a savory, soul-warming, tummy-filling dish to escort you into the cooler weather, give this chunky split pea soup a try. Oh, and I suggest you make a batch of big, crispy, homemade croutons to throw on top, like I did. 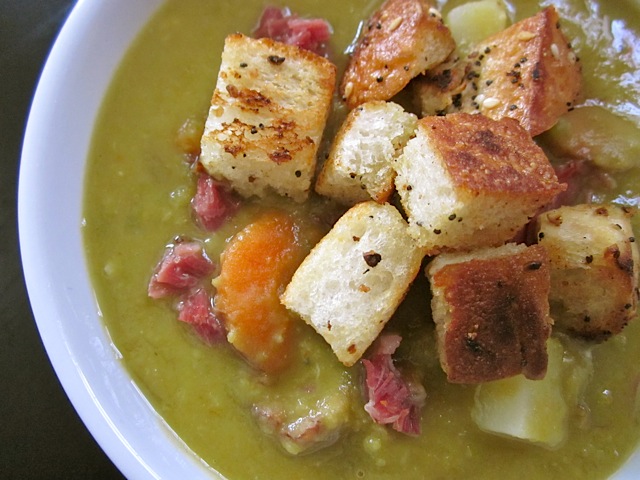 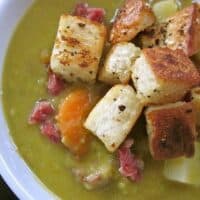 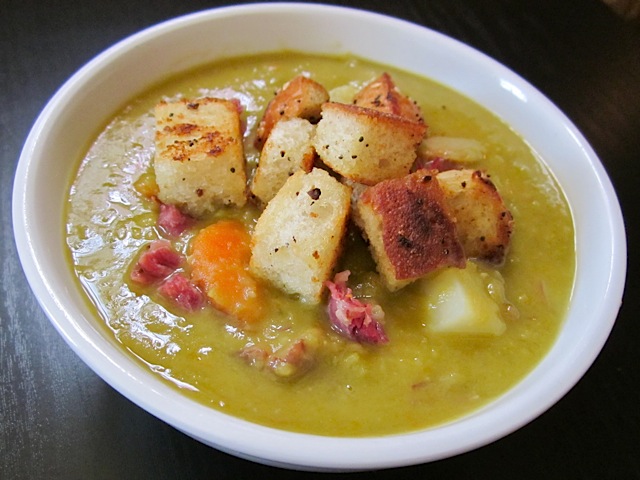 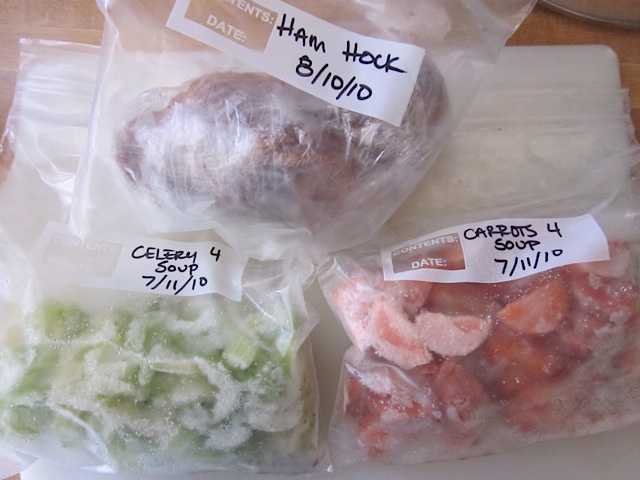 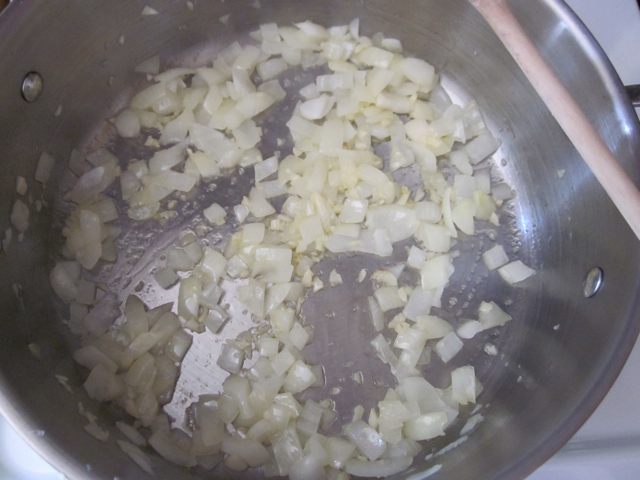 Cook the chopped onion and minced garlic in olive oil until soft. 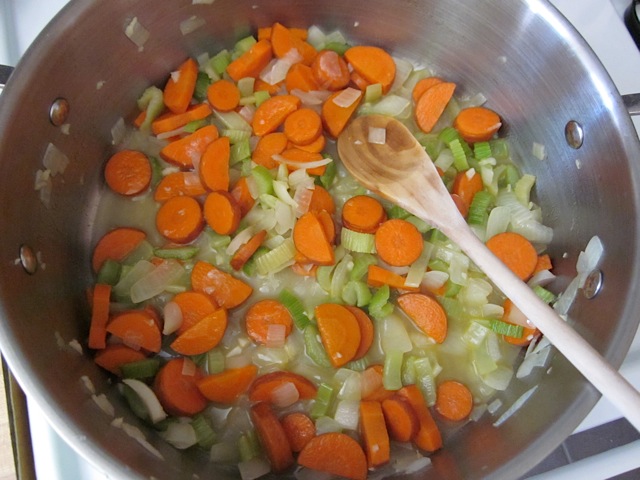 Add the carrots and celery and cook them until they have softened (or thawed out!). 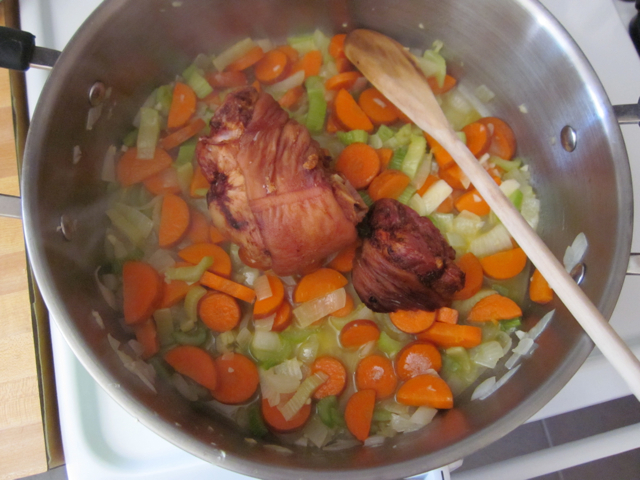 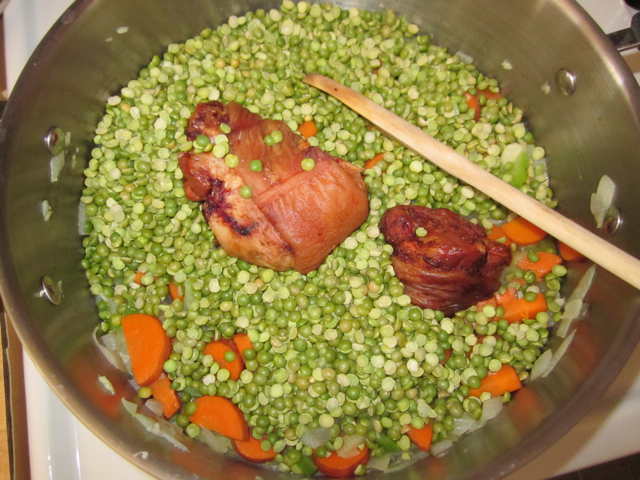 and the split peas… 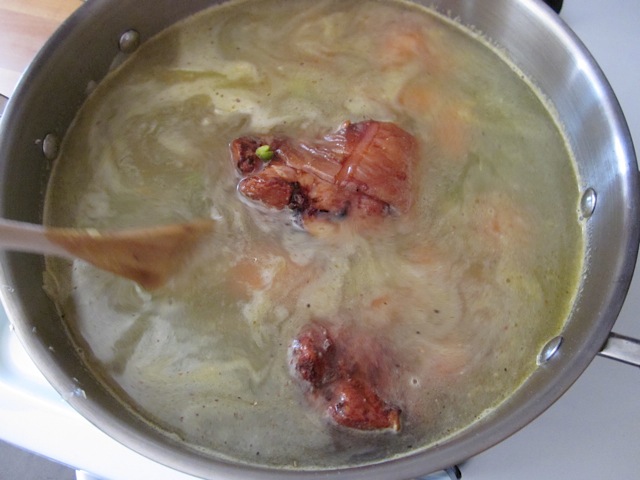 Add enough water to cover the ham hock (minimum of 6 cups to cook peas fully, no more than 8 cups to prevent a watery soup). I then added bouillon to add some “oomph” to the veggie/ham stock that is already brewing. This is optional. I like Better than Bouillon because it’s usually a little more economical than the cubes and has good flavor. 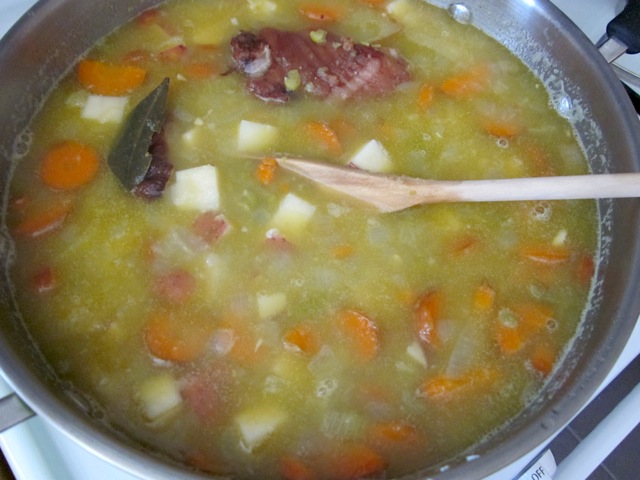 Oh yeah, add the bay leaf too. Let the soup simmer over low heat with a lid on for an hour (make sure it’s simmering). 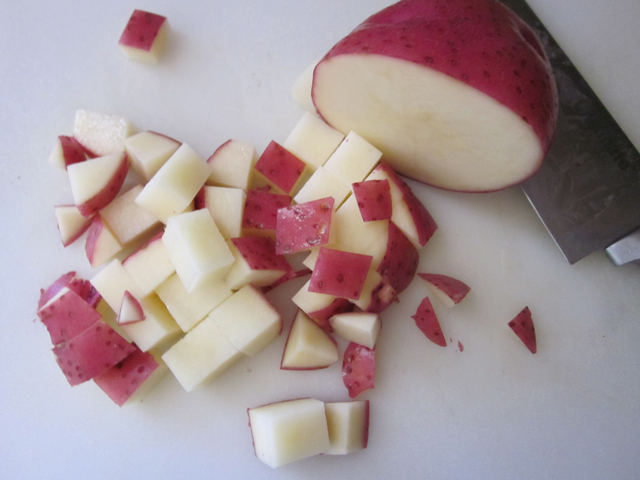 Dice the potato into fairly small pieces, add to the pot and simmer until they are soft. I used a red potato because that is what looked fresh at the store. Use any kind you’d like. 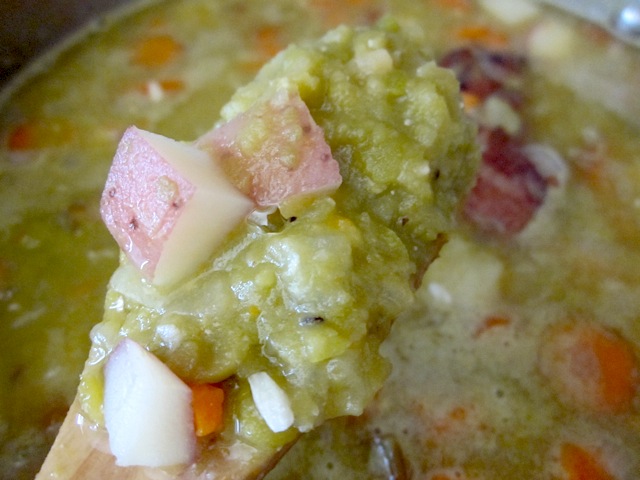 At this point, the peas should have been reduced to mush like in the picture. If they still have shape, continue to simmer the soup. Once they are all mushy, remove the bay leaf and ham hock. Place 1/3 to 1/2 of the soup in a blender and puree until thick. Return it to the pot and stir it all up. BE VERY CAREFUL WITH HOT LIQUIDS IN THE BLENDER 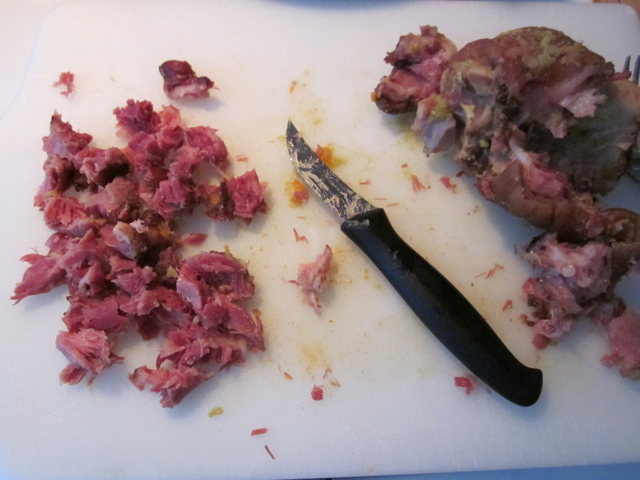 When the ham hock is cool enough to handle, remove the meat from the bone and cut it into small pieces. Return the meat to the soup and DIG IN!! 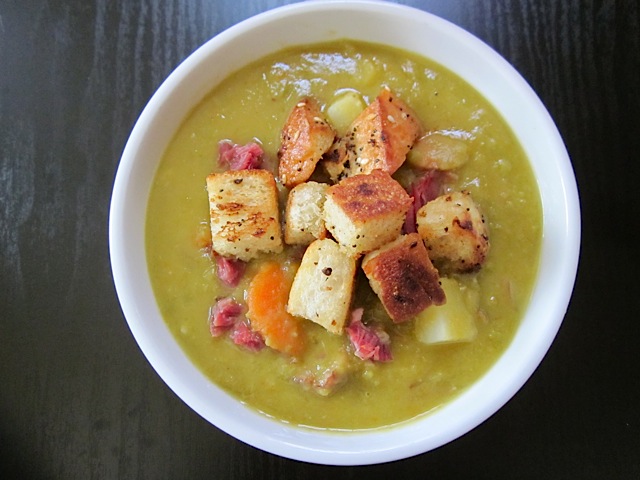 NOTE:If you’re not crazy about the idea of a ham hock you should get over it. No, just kidding. Well, you should because they’re delicious but if you can’t get over it you can use bacon or salt pork in it’s place. Just cook the bacon (or salt pork) down in a pot before you do anything. Drain off most of the fat if desired but leave enough to cook the onions and garlic in. Proceed with the recipe as usual then add the cooked bacon at the end! Easy and no pig knuckles involved. HA!