What happens when an unusually cool Autumn breeze blows by and I get a sudden craving for split pea soup, but am waaay too tired to do any actual cooking? I grab a bag of split peas, toss them into my pressure cooker with a few vegetables, broth, and spices, and let the machine do it’s time warp magic. About 45 minutes later I opened the lid to a thick, rich, and flavorful split pea soup. This Pressure Cooker Split Pea Soup was seriously one of the easiest thing I’ve ever cooked (and cheapest!).

To Ham or Not to Ham?

This split pea soup is vegetarian (vegan, even) because I wasn’t in the ham mood, but you could certainly add a ham hock or some cubed ham to the pot before you turn it on. To keep the soup rich and give it body without ham, I added a couple dollops of coconut oil. To mimic the smoky flavor of ham, I added a hefty dose of smoked paprika. Liquid smoke would also do well. The finished soup was filling, but light, and full of that cozy fall flavor that I love. :)

What Kind of Pressure Cooker are You Using?

I used my 6 qt. 7-in-1 Instant Pot (affiliate link), but any pressure cooker will work.

To make this in a slow cooker:

Toss everything into your slow cooker instead of a pressure cooker and cook on high for four hours, or low for eight.

To make this on the stove top:

Sauté the onions and garlic in the coconut oil until soft. Add the carrots and celery and sauté just until they begin to soften. Add the remaining ingredients, bring the soup up to a simmer and let simmer until the peas have broken down and thickened the soup. Add a little water as needed during cooking to offset any evaporation.

4.89 from 44 votes
Pressure Cooker Split Pea Soup is a an easy, inexpensive, and comforting soup for fall, full of nutrients and flavor.
Author: Beth – Budget Bytes 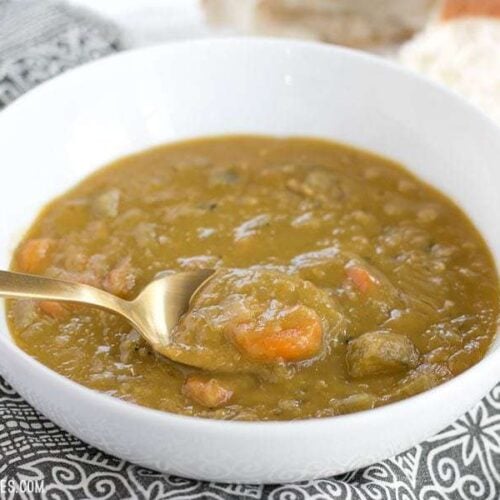 *You can use butter or the cooking oil of your choice in place of the coconut oil. NOTE: When cooking beans or peas in a pressure cooker, be sure not to overfill the cooker. Check the manual for your machine to see the suggested maximum fill level for cooking beans.

Start by dicing one onion, slicing three carrots and three ribs of celery, and mincing two cloves of garlic. Place the onion, carrots, celery, and garlic in the pressure cooker. The garlic in the photo is just “crushed” rather than minced, but it would have been better to have minced it.

Finally, add six cups of vegetable broth and give everything a quick stir to combine (I use Better Than Bouillon to make my broth).

Close the lid on the pressure cooker, close the steam valve, and set the cooker to 15 minutes of high pressure. For the Instant Pot, I just hit the “manual” button and reduced the time from 30 to 15 minutes. Total time in the cooker ends up being about 45 minutes when you include the time it takes to come up to pressure and the time it takes to release pressure (natural release). It is not suggested to use quick release when cooking legumes because they can become foamy and clog the steam valve.

After the cooker returns to normal pressure naturally, open the steam valve then open the lid. Stir the soup until it is thick and creamy. It will look watery on top at first, but will become thick as you stir. Taste the soup and adjust the salt or other seasonings to your liking.

And seriously, that’s ALL! Soup is served! The soup does thicken quite a bit more once cooled and it stays fairly thick after reheating the leftovers. They’re almost like mashed potato texture the next day, but that’s okay with me! Still totally delicious and filling. 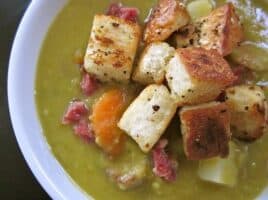 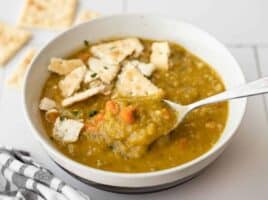 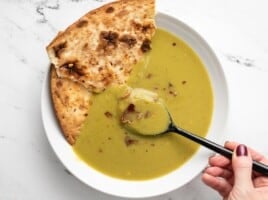 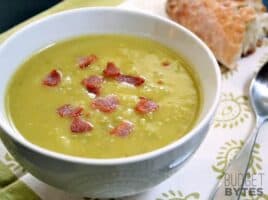