I’ve hesitated to make potato soup for quite some time because all I could think about is how creamy and carby it must be. Surely it’s not good for me to eat that every day, right? Well, that’s right… unless you make it like this.

I made this super delicious, veggie packed, low fat potato soup and guess what? It’s also super inexpensive! That’s what I’m talkin’ about. To make this soup healthier, I left the skins of the potatoes on, added celery and carrots, and used 1% milk thickened with flour rather than cream.

This soup is so delicious that not only did I gobble down two bowls as soon as I was finished making it (tsk, tsk), but I didn’t even bother to add the “toppings” that I had bought for it (cheddar, green onion, parsley). For that reason, I decided not to include any toppings in the price break down. It’s good enough to stand alone. Besides, there are way too many topping options and everyone will probably use something different… you can do sour cream, cheese, green onion, parsley, bacon, smoked paprika, or nothing at all because IT’S ALREADY DELICIOUS. 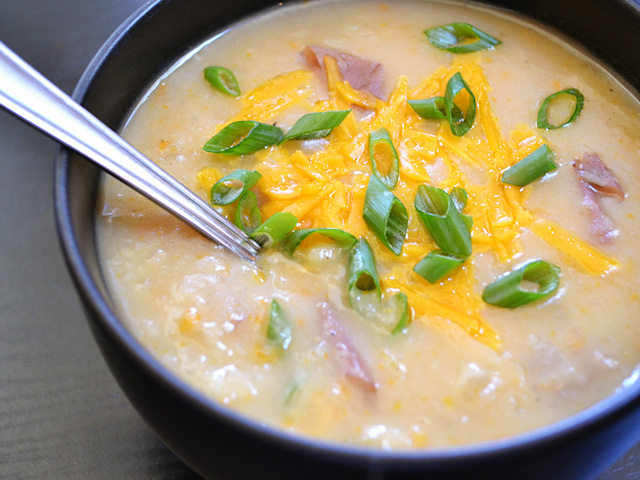 4.33 from 37 votes
This slow cooker potato soup is rich and hearty, plus the slow cooker does all the work!
Author: Beth - Budget Bytes 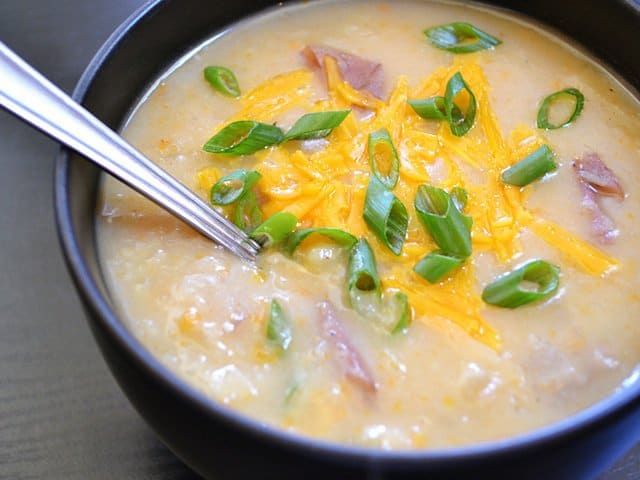 I use chicken base or bouillon plus water in place of broth to save $$$. 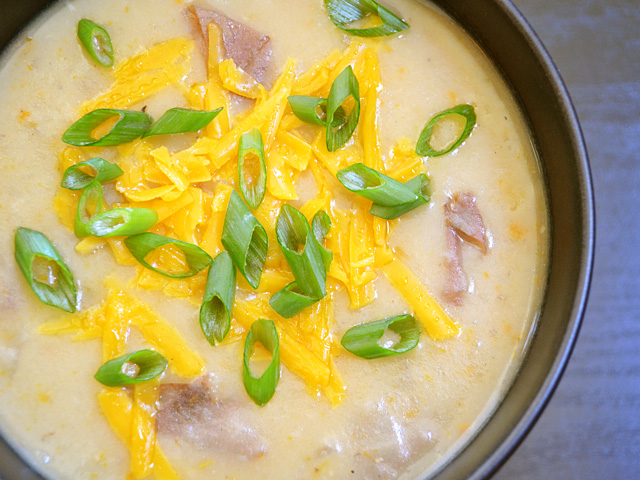 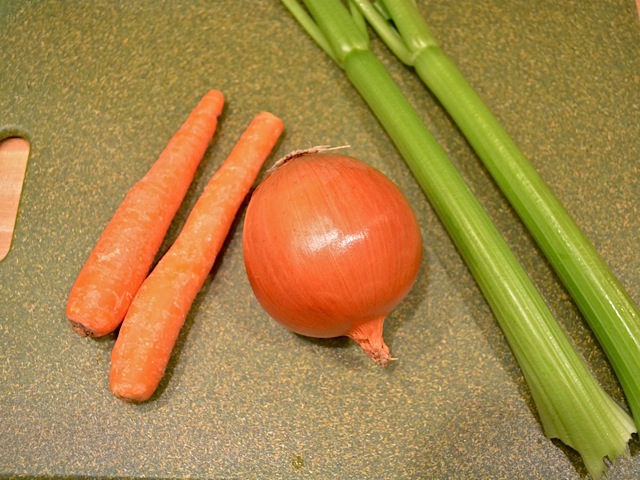 Start by preparing your vegetables. Obviously, you can’t buy just two carrots and two stalks of celery, but that doesn’t mean that you have to waste a whole bag just to get what you need for this soup. I always dice up the rest of the bag and freeze it to use in a soup later. Many, many soups start with onion, celery, and carrot, so I often have what I need in my freezer and don’t have to buy them! See an example in this post (scroll down to the step by step photos). 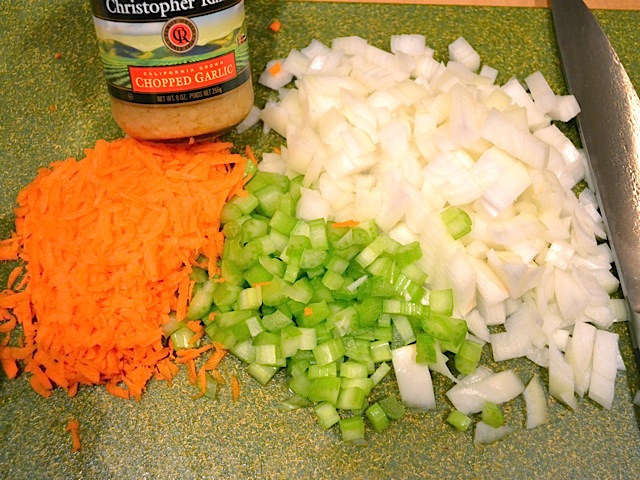 Dice the vegetables very small so that there aren’t huge chunks in your potato soup. Carrit can be difficult to dice because it’s round, so I just grated it on a cheese grater. Also, carrots don’t get as soft as the rest so it was nice to have very small pieces. 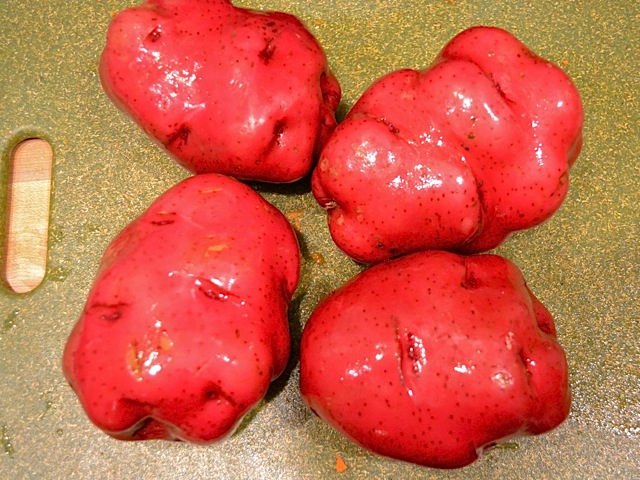 I used red potatoes because I love them. I left the skins on and just cleaned them really well (I love potato skin, call me crazy). I would stay away from using yukon gold potatoes because they tend to be more “waxy” and will not mash into the soup as easily. Also, I bought four potatoes, but they were huge so I ended up only using three, which was about 3 lbs. total. 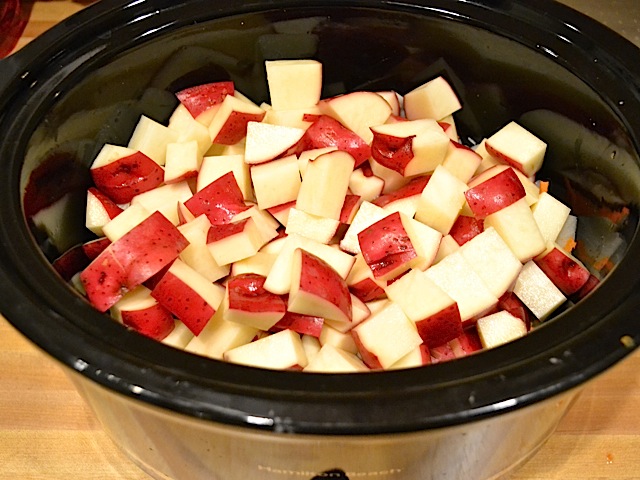 Cut the potatoes into small cubes – one inch or smaller. The smaller you cut them now, the easier it will be to mash them up later. Add all of the vegetables to the slow cooker (onion, celery, carrot, garlic, potatoes). 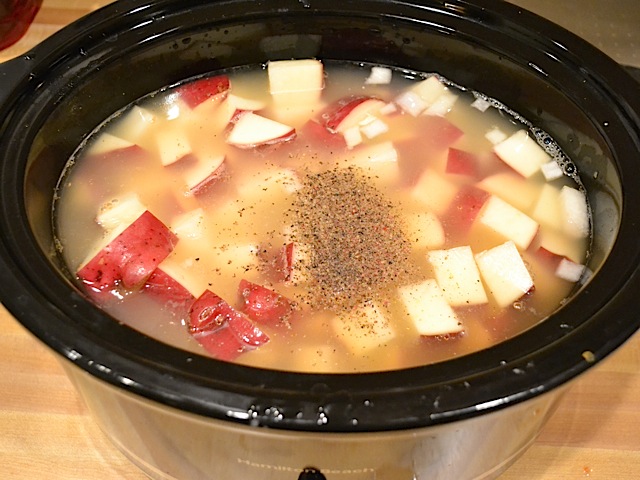 Make 6 cups of chicken broth with the chicken base (I use Better Than Bouillon brand) and add it to the slow cooker. Also add some freshly cracked pepper. Secure the lid on the pot, turn the heat onto high, and let ‘er rip. Cook for about 8 hours (a little more or less is okay). 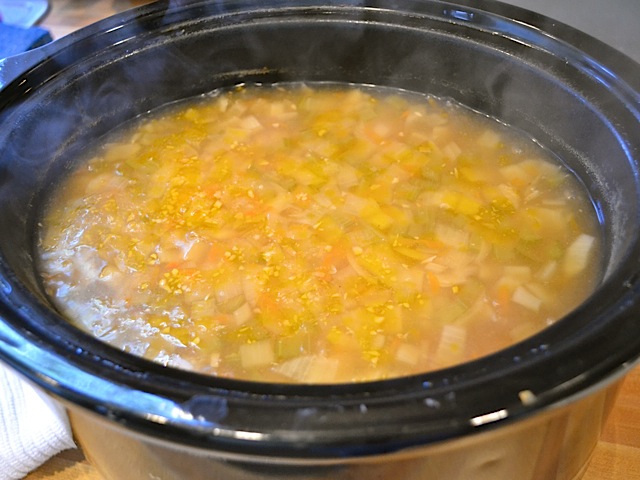 And then when you come back later (or wake up in the morning, in my case) you’ve got a nicely cooked “soup” of a mixture. All of the vegetables are very soft and will mash up easily. 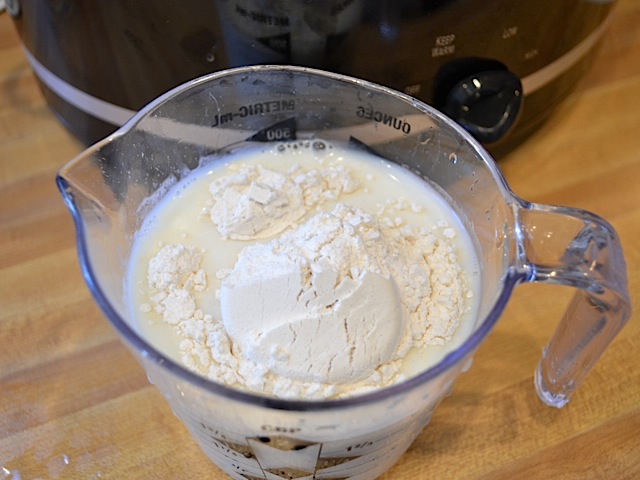 And here comes the “creamy” part. Whisk the all-purpose flour into the milk, trying not to let any big lumps remain. 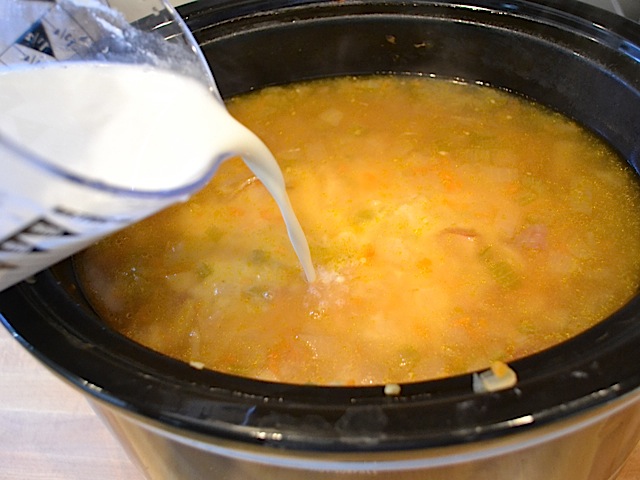 Pour the flour/milk mixture into the soup, put the lid back on top and let it cook on high for another 30 minutes or so. It needs to come back up to a bubble for the flour to actually thicken the soup. 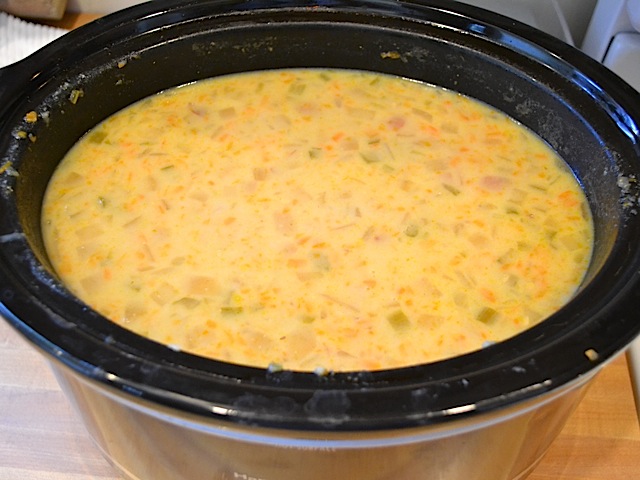 And then the soup is ready to be mashed. Lucky me, I don’t have a potato masher so I had to improvise. First I used a whisk, which didn’t work so well. So then I mashed some with a large spatula, and then I finally pulled out my hand mixer and “mixed” on low speed (to prevent hot splashes) for a few minutes until it was somewhat mashed. I still had some potato pieces, but I like a slightly chunky texture. Mashing the potatoes releases some starch into the soup which will help thicken it further. Give the soup a taste and add salt as needed. I added about a teaspoon of salt. This pic is pre-mashing. 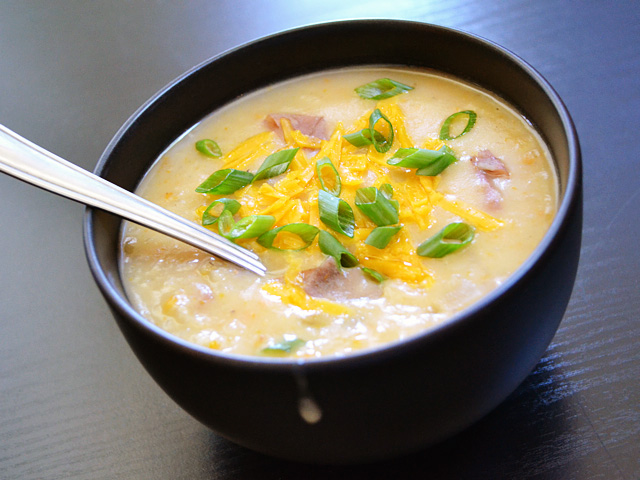 And then, if you must, add some delicious toppings… but I’m telling you, I tore this soup up all on its own. The potato skins in the picture kind of look like ham… I bet ham would be another yummy topping! Too many options. :P