Okay, this might be the best thing I’ve ever made in my slow cooker. No joke. The combination of the subtle spices, orange essence, and richness of the slowly cooked pork is absolutely to die for. I hereby retire my chili rubbed pork in favor of these Slow Cooker Carnitas. I want to make sure I have some of this in my freezer at all times for tacos, burritos, and NACHOS. Oh yes, the nachos I could make with this pork… 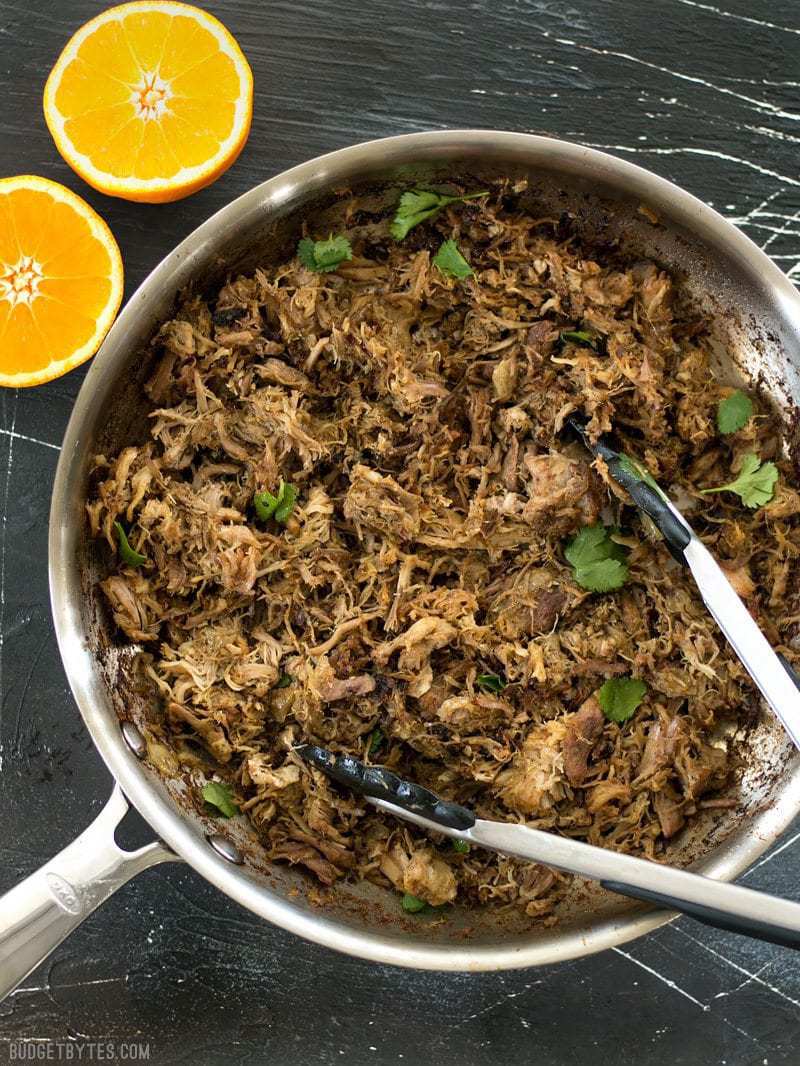 What gives Carnitas its unique flavor?

If combining cinnamon and orange with pork sounds a little far fetched to you, don’t be scared! The flavors are subtle and add layers of flavor that you never imagined meat could have. It’s not sweet, it’s just amazing. Promise me you’ll try it.

While I used my slow cooker to cook the meat down until it was tender and juicy, I finished it off in a skillet to get some crispy edges. You want to wait until just before serving to crisp the meat up, so if you don’t plan on serving the entire 3 pounds of meat at once, store the rest in the cooking juices. I divided my slow cooked meat in half and transferred half of it to the freezer after chilling over night. I crisped the other half in a skillet and made deliciously rich little tacos with pickled red onions.

Can I make Carnitas in an Instant Pot?

And YES, you can absolutely do this super fast using an Instant Pot. ;) Just layer everything in your IP as I did with my slow cooker, secure the lid, and press go. The Instant Pot manual suggests 45-50 minutes of high pressure for a pork butt roast. 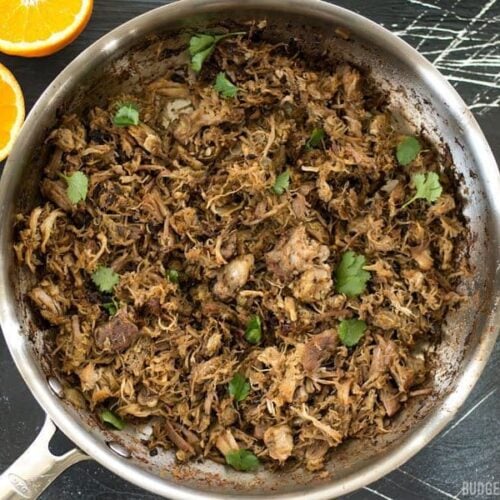 This recipe has become one of my absolute favorites for meal prep! It freezes well so I can make a huge batch and portion it out as needed before freezing. One week I’ll use it for a bowl meal, one week for burritos, maybe one week for nachos. It’s a life saver to have the pre-cooked meat ready to go in the freezer. 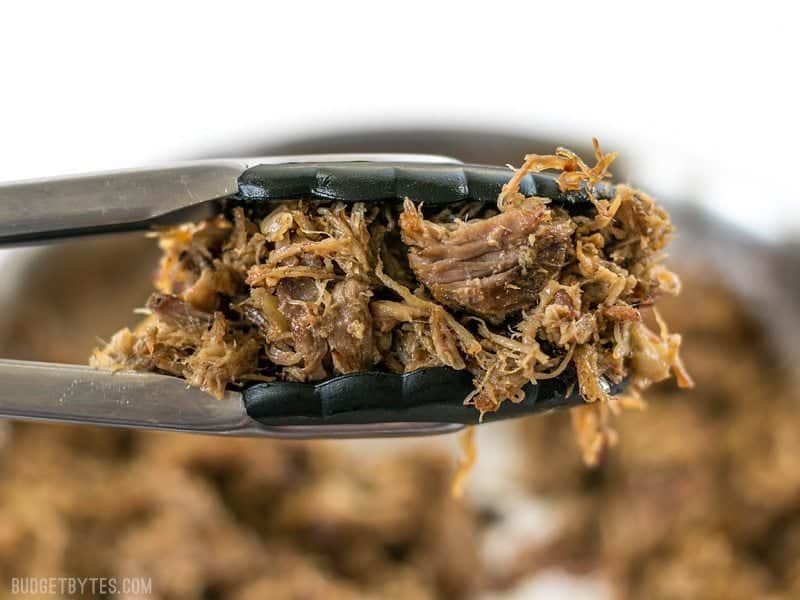 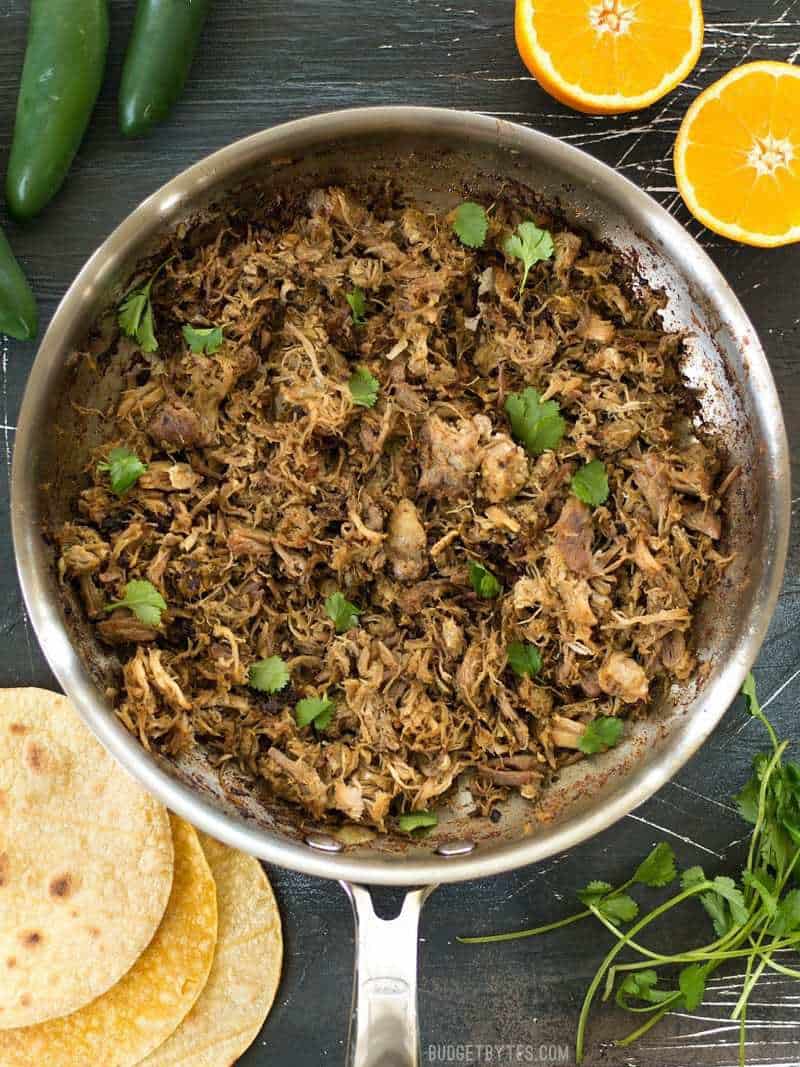 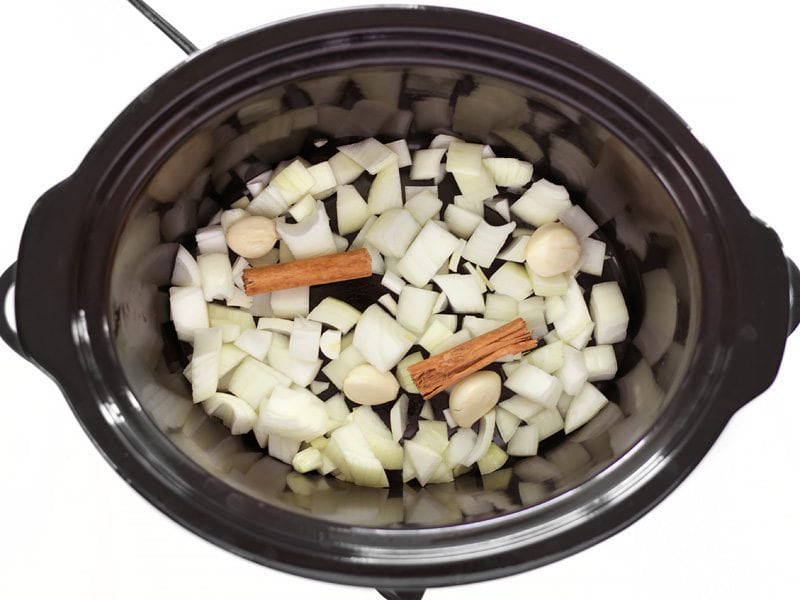 Dice an onion and peel four cloves of garlic. Place the diced onion, garlic cloves, and two small cinnamon sticks in the bottom of the slow cooker. 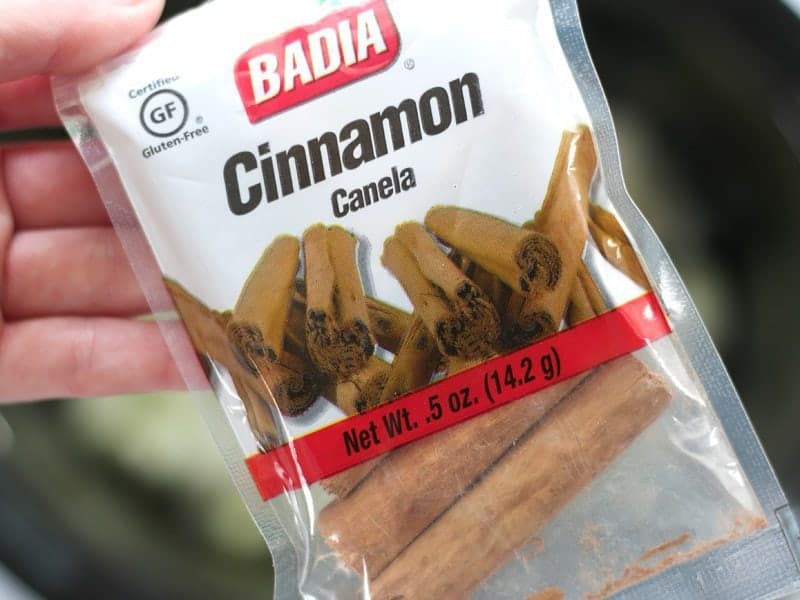 These are the cinnamon sticks I use. These little packets of four small sticks are found in the Hispanic food section of my local grocery store and only cost $1.89. So, in if cinnamon sticks are expensive in the spice aisle, check the international foods aisle as well. 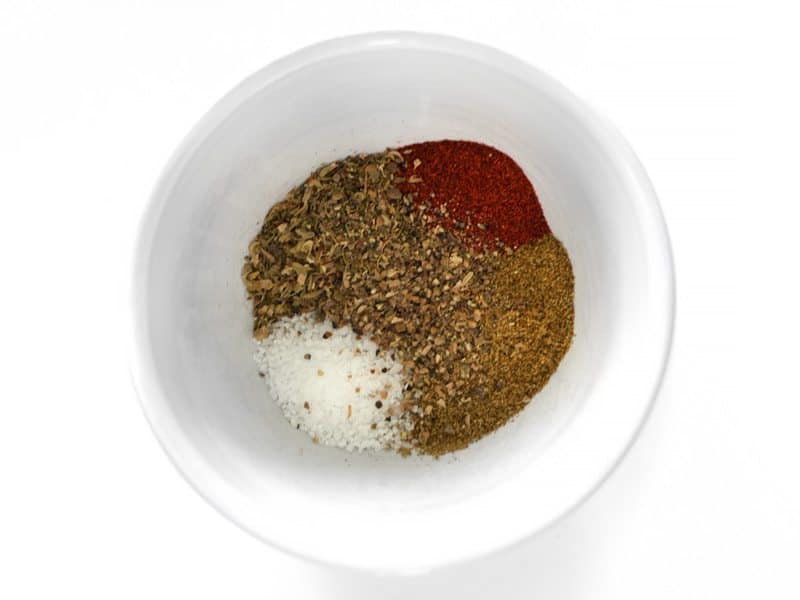 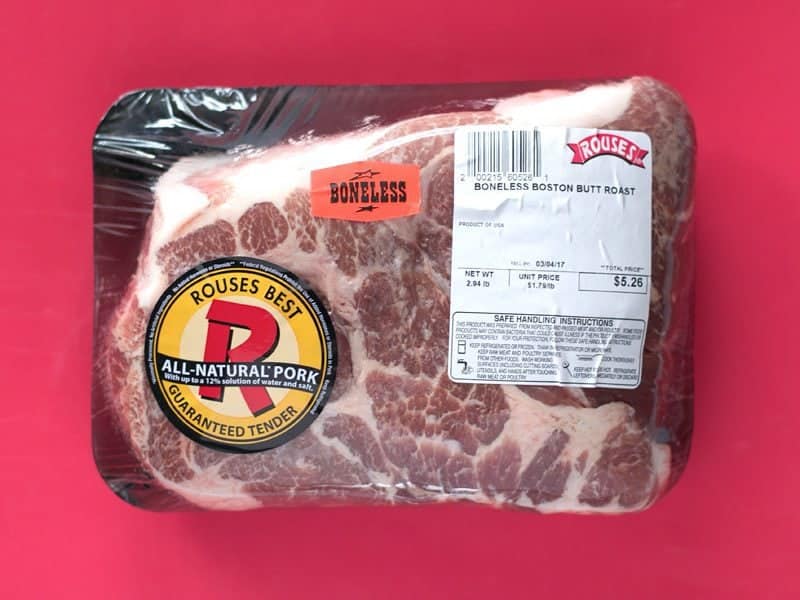 You’ll also need one pork butt roast, about 3 lbs. If you use a bone-in roast, just get one slightly larger than 3 lbs. and don’t forget to pull the bones out after cooking. 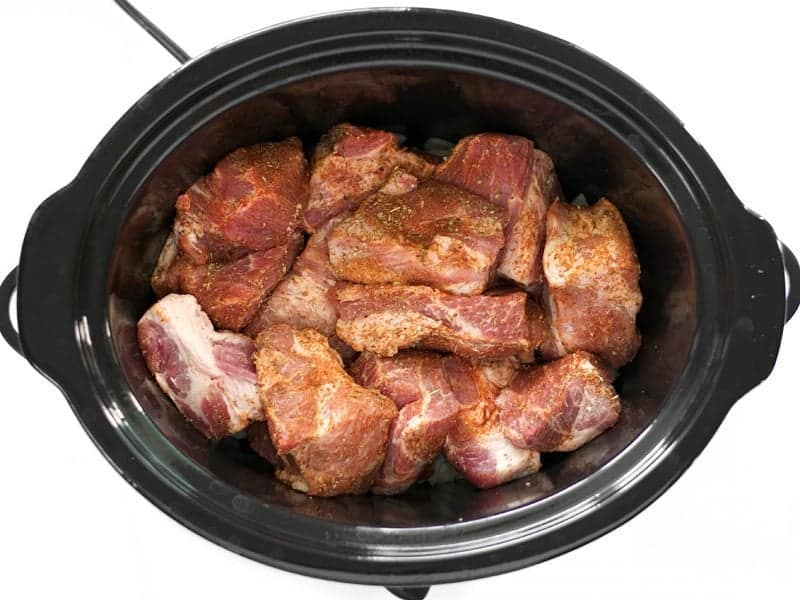 Cut the pork into 2-inch cubes, place them in a bowl, and sprinkle the spice mix over top. Toss the meat cubes in the spices until they’re evenly coated, then place them in the slow cooker on top of the onion, garlic, and cinnamon. 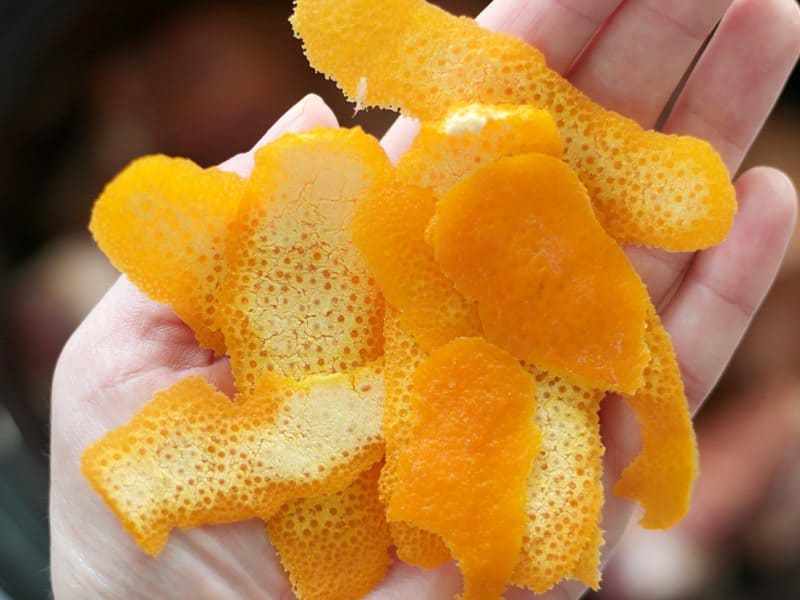 Use a vegetable peeler to remove the zest from one of the oranges. You want to get all the nice orange parts with the fragrant oils, but not the white pith, which can be bitter. Also juice the oranges. You need about 1/2 cup juice. 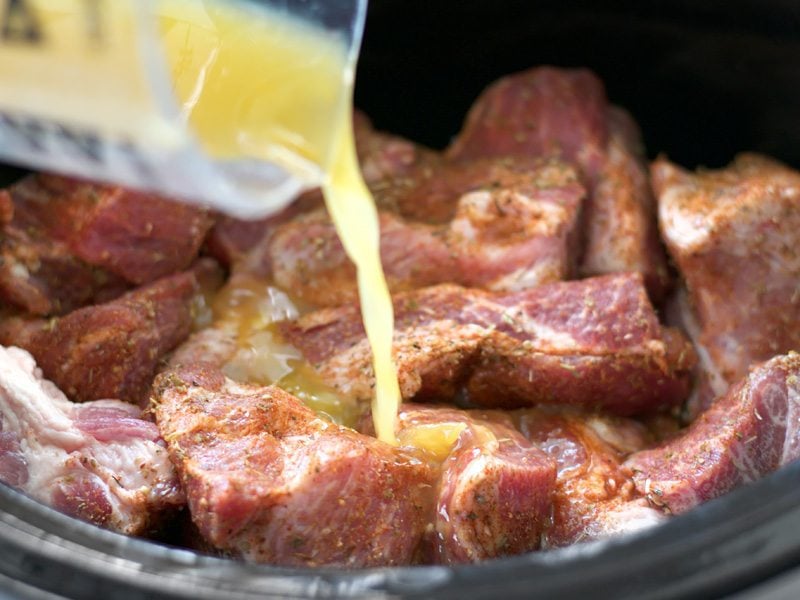 Pour the orange juice over the meat… 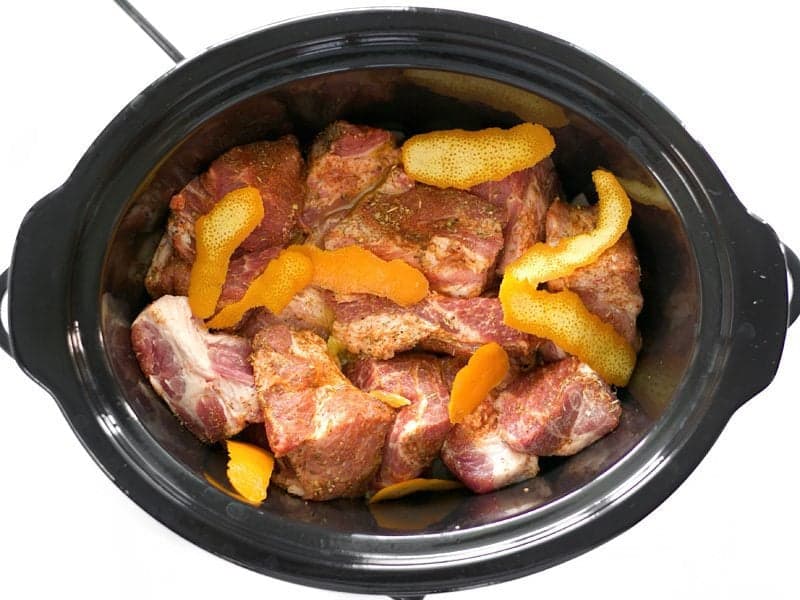 And add those orange peels over top. 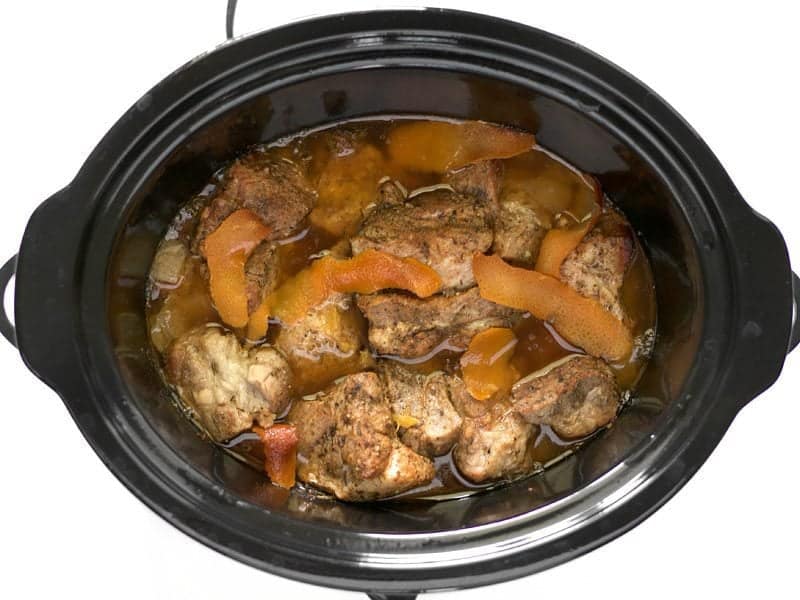 Place the lid on the slow cooker, turn it on to high, and cook for 5 hours. See how much liquid comes out of the meat? That’s good stuff right there. 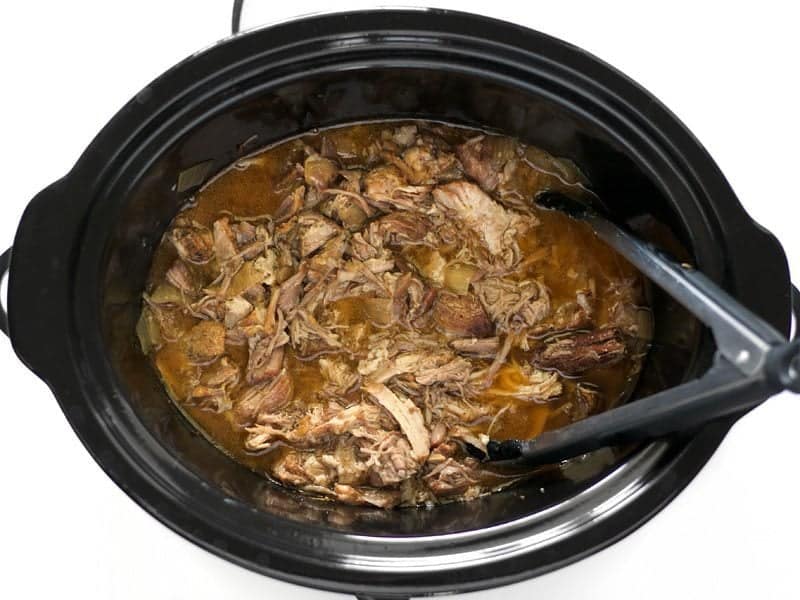 Use a pair of tongs to stir and shred the meat. Fish out the cinnamon sticks (and bones, if you used a bone-in roast) at this time. You can serve the meat just as it is, or you can crisp it up in a skillet. 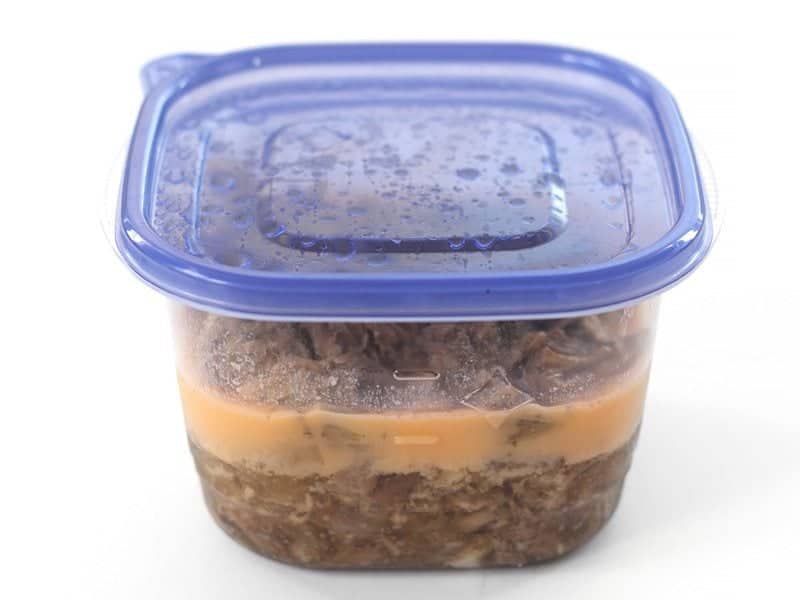 OR you can refrigerate it or freeze it for later. If refrigerating/freezing, I highly recommend dividing the meat up into smaller portions before refrigerating (store it with the cooking juices). This helps it cool faster and prevents food safety issues. If you want to freeze some of it, let it chill in the refrigerator over night before transferring to the freezer. 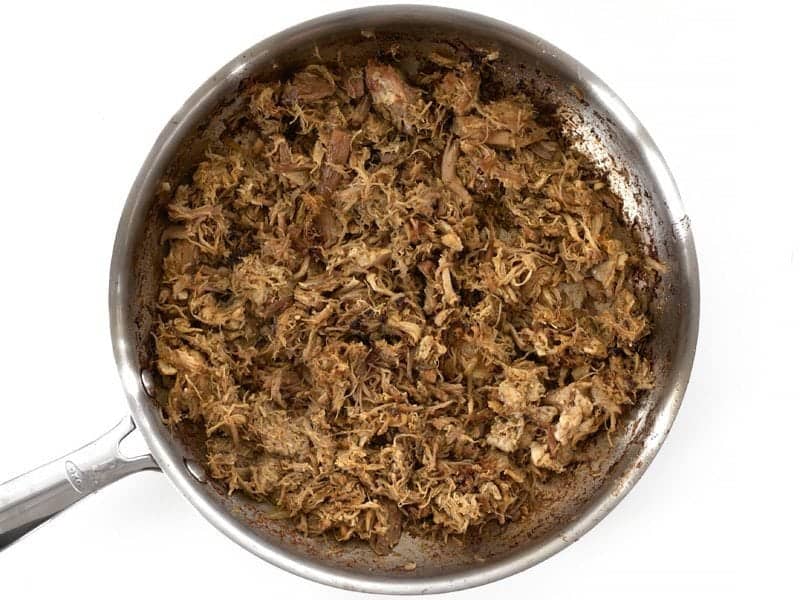 To make the carnitas crispy, just cook it in a skillet with some of the juices (because you need the fat from the slow cooker to basically fry the meat) until it’s crispy. I recommend doing this in some sort of non-stick skillet though, like cast iron or teflon, because the liquified collagen likes to stick to and coat stainless steel. 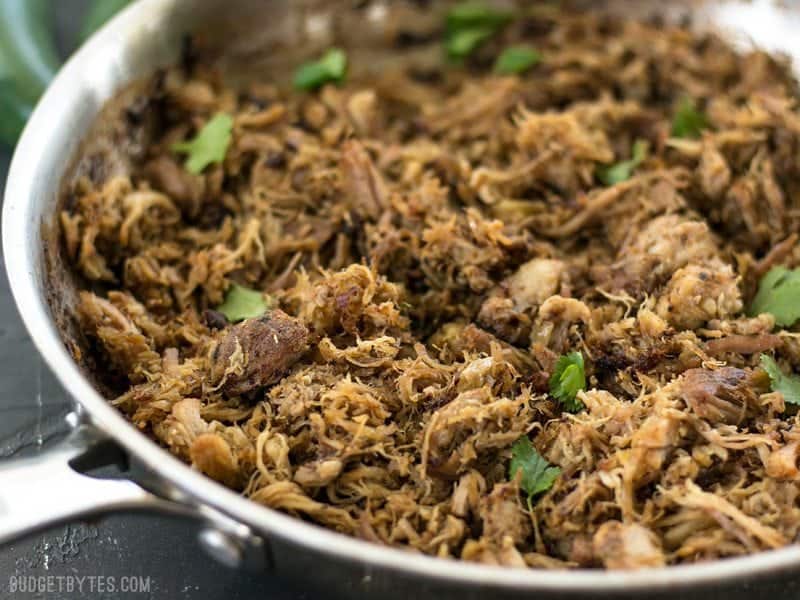 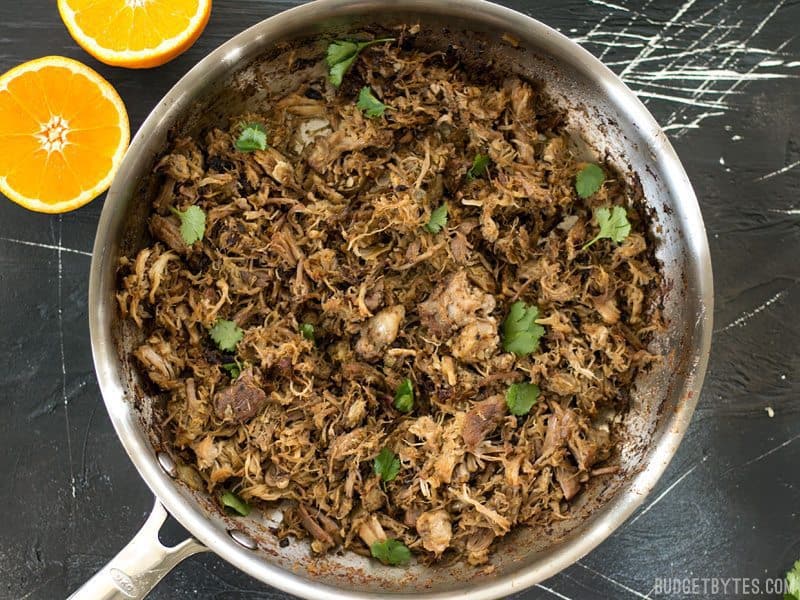 Now excuse me while I go make the most epic nachos EVER. ;)