Did you know that the Dragon Noodle sauce also makes a great stir fry sauce? Truth. So when I saw that I still had a half pound of shrimp left over from my last Dragon Noodle remix, Lime Shrimp Dragon Noodles, I decided to remix it yet again into a Shrimp Fried Rice with Pineapple and Toasted Coconut. And let me tell you, that coconut makes it like “OMG” good. 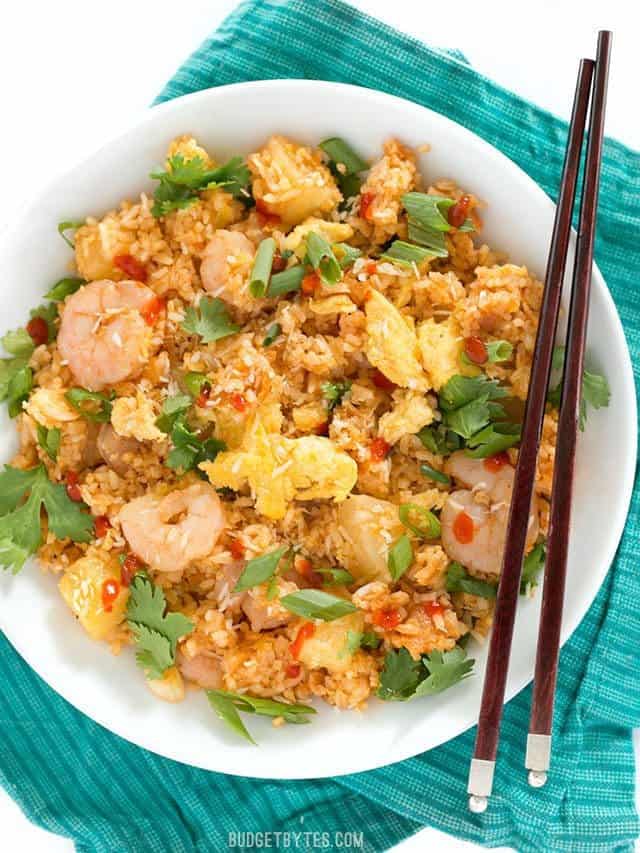 There are two important keys to making good fried rice: use long grain rice: use day-old chilled rice and fry the ingredients separately before combining them all at the end.

Using day-old long-grain rice ensures that you get those nice individual grains in the final product instead of one big sticky, mushy mess. Frying the ingredients separately before combining them all at the end ensures that nothing overcooks or overcrowds the skillet or wok, which will result in the food steaming instead of frying.

Another tip for fried rice: Using a well-seasoned wok, cast iron, or some other non-stick surface is best because it will help prevent the rice and other ingredients from sticking and gives you the option to use less oil if desired.

Can I substitute the Shrimp?

Yes! If you can’t get shrimp for a decent price in your area (I know, I’m lucky here in Louisiana), you can make this with chicken or just do a vegetarian version. If I were making this vegetarian, I’d probably add in a diced red bell pepper for a little extra color and texture. 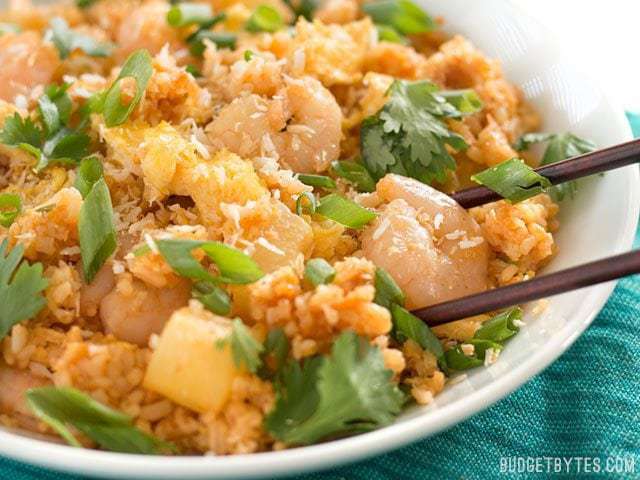 4.89 from 17 votes
Shrimp Fried Rice with Pineapple and Toasted Coconut is a fast and easy alternative to takeout, perfect for busy weeknights!
Author: Beth - Budget Bytes 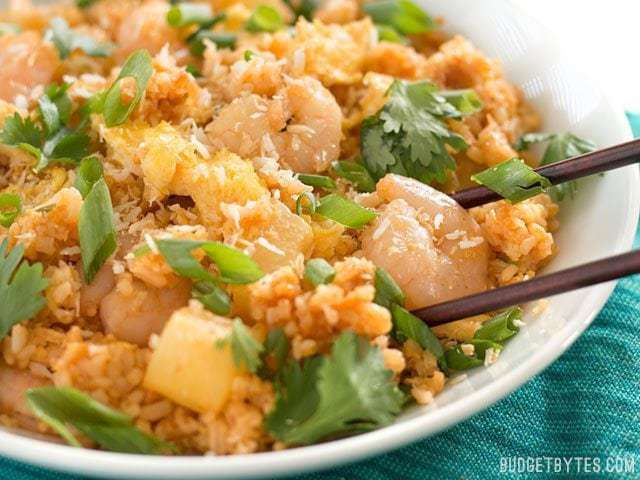 *I found my unsweetened coconut shreds in the bulk bins at Whole Foods. **Use any high heat neutral cooking oil, like canola, peanut, sesame, safflower, etc. Or, try using coconut oil for even more coconutty flavor!

Scroll down for step by step photos! 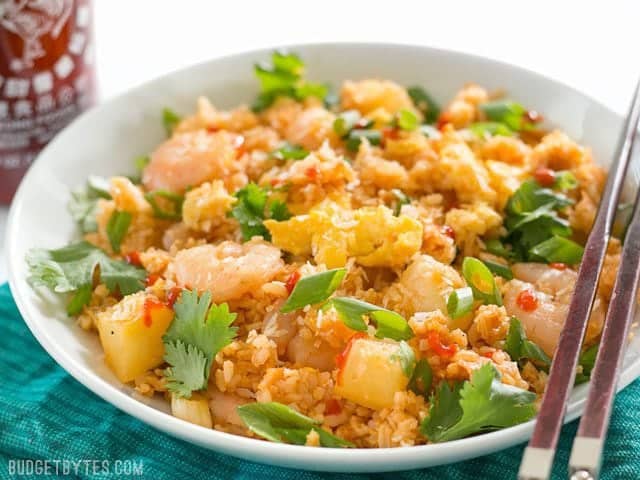 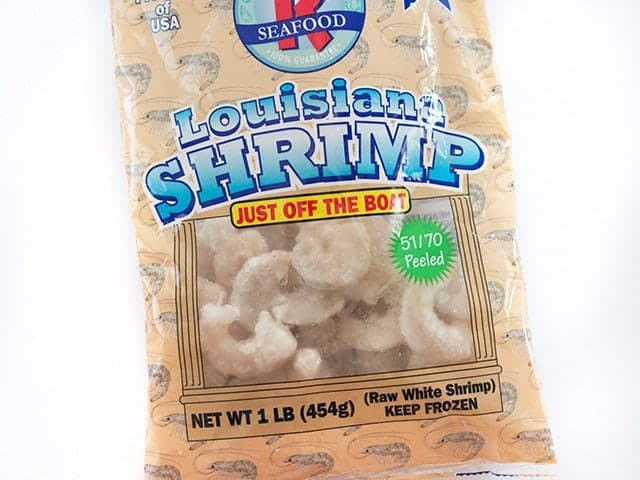 Start with 1/2 lb. peeled and deveined shrimp, 51/70 size. Those numbers mean that there will be between 51-70 shrimp per pound, so the smaller the number, the larger the shrimp. I like to use shrimp that is on the smaller side for dishes like this so that you get more shrimp per plate instead of just a few large pieces. 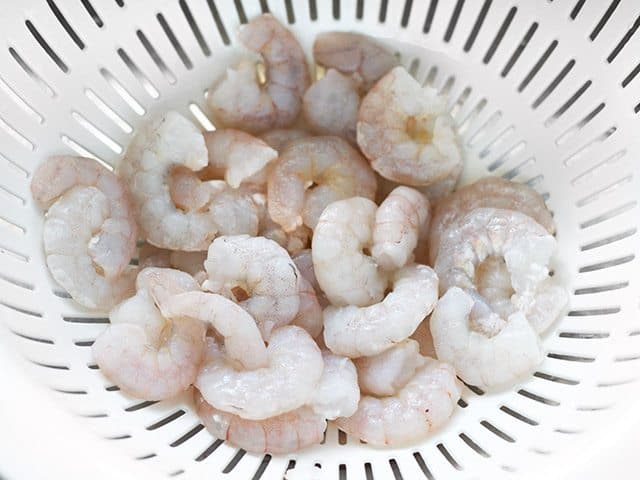 My shrimp was frozen, so I had to thaw it first. You can quickly thaw frozen shrimp by placing it in a colander and letting cool water run over it. It will thaw in about a minute or so. 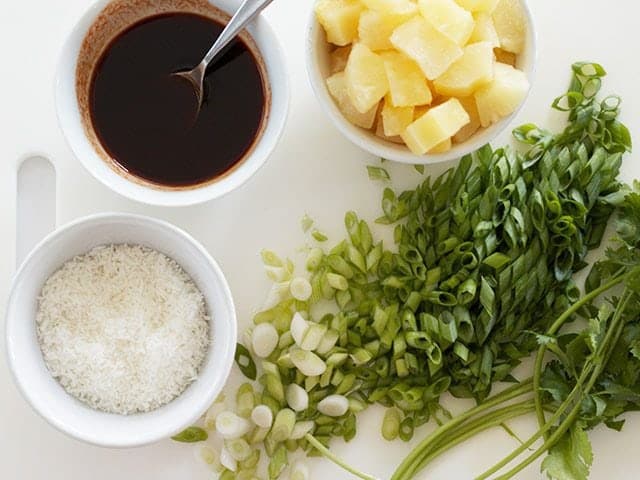 Collect and prepare the rest of the ingredients so they’re ready to go when you need them. Fried rice is a fast paced dish, so it’s best to have everything prepared ahead of time. Prepare the sauce by stirring together 2 Tbsp soy sauce, 2 Tbsp sriracha, and 1 Tbsp brown sugar. Drain a 20oz. can of pineapple chunks in juice (you can save the juice for smoothies or cocktails!). Slice 1/2 bunch green onions, get a few sprigs of fresh cilantro, and measure about 1/4 cup unsweetened coconut shreds. 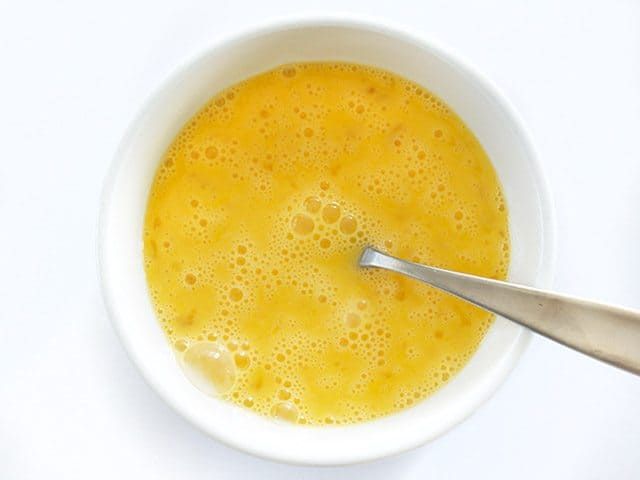 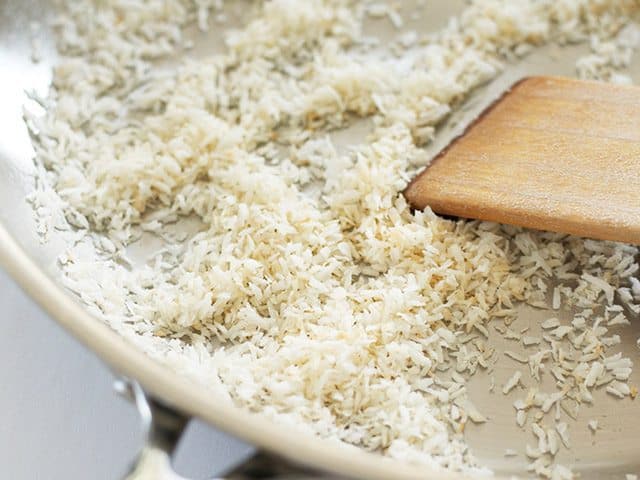 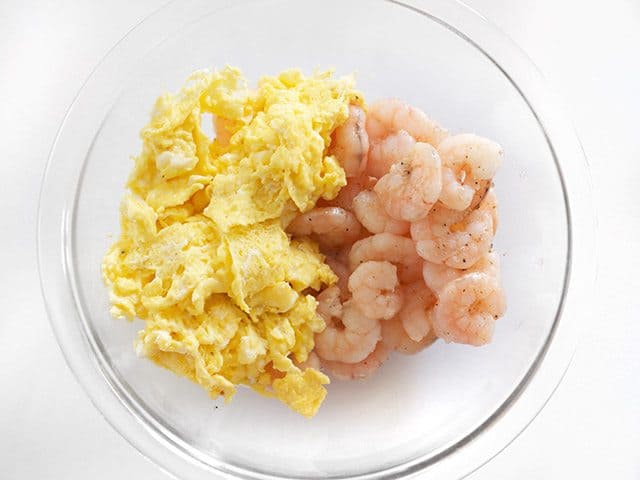 The next few steps happen so quickly that I was unable to capture them in the skillet, so I’ll just describe them here. Add 1 Tbsp cooking oil to the hot skillet, swirl to coat the surface, then add the shrimp. Cook the shrimp just until it’s pink and opaque, then transfer it to a clean bowl. Add a little more oil, then pour in the eggs. Lightly scramble the eggs in the hot skillet just until they’re set, but still moist. Transfer the cooked eggs to the bowl. 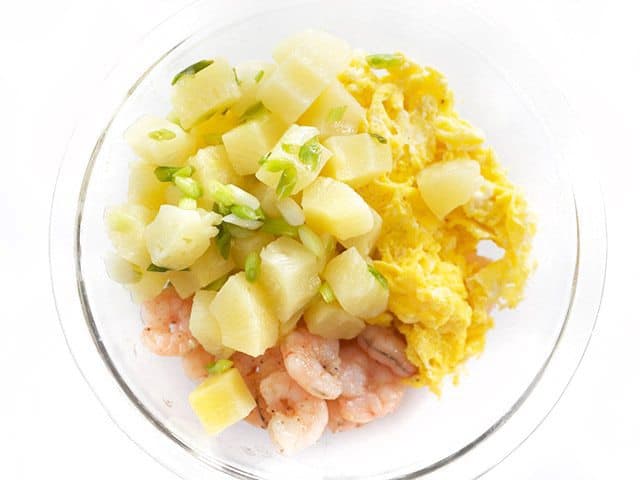 Lastly, add the pineapple and lower half of the sliced green onions (the white ends and some of the green) to the skillet and cook until they’re heated through. Once hot, transfer them to the bowl as well. 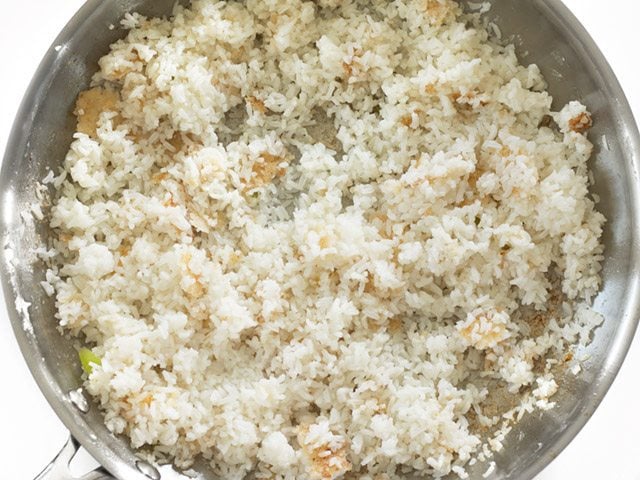 Finally, add a bit more oil to the skillet and swirl to coat again. Add 4 cups of cooked and cooled rice (day old, preferably). Let the rice cook in the skillet until it begins to sizzle and crackle, then give it a stir and let it cook some more. Continue to cook the rice in this fashion until it’s hot and some of it is golden and crispy. (This is where a well-seasoned wok or other non-stick surface really comes in handy. Starchy foods, like rice, like to stick a bit more in stainless steel.) 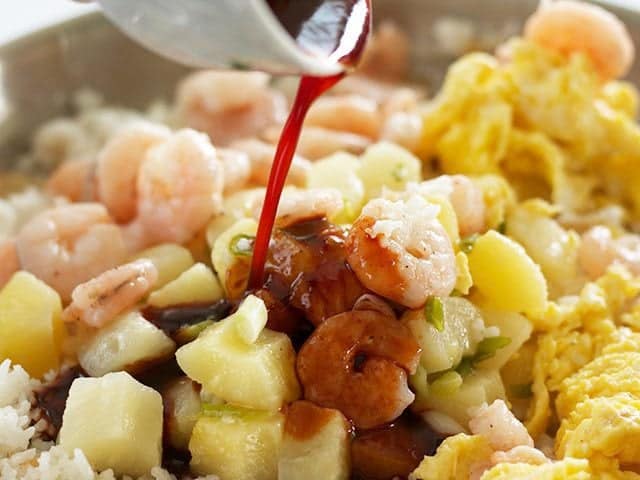 Once the rice is “fried”, add the cooked ingredients (shrimp, egg, pineapple, green onion) back to the skillet with the rice and pour the prepared sauce over top. 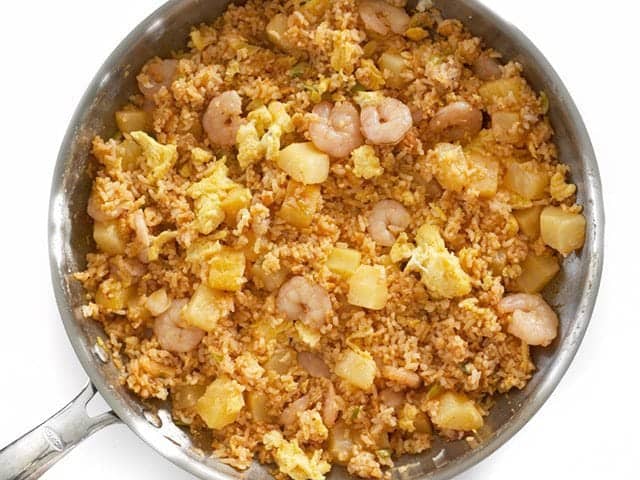 Stir the contents of the skillet until everything is coated in the sauce and heated through. 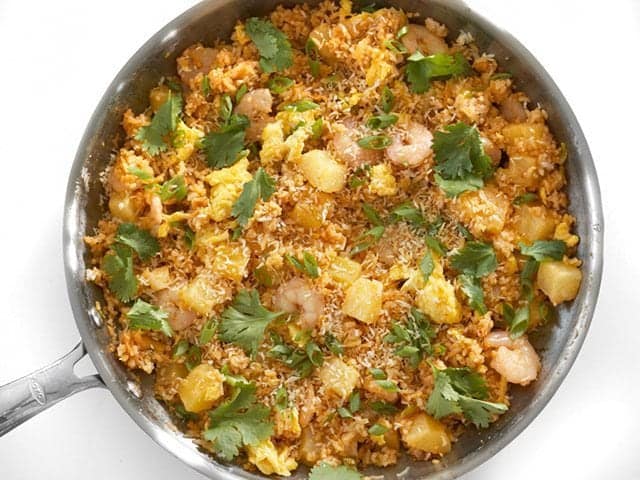 Top the fried rice with the toasted coconut, the remaining green onion, and a fresh cilantro leaves just before serving. 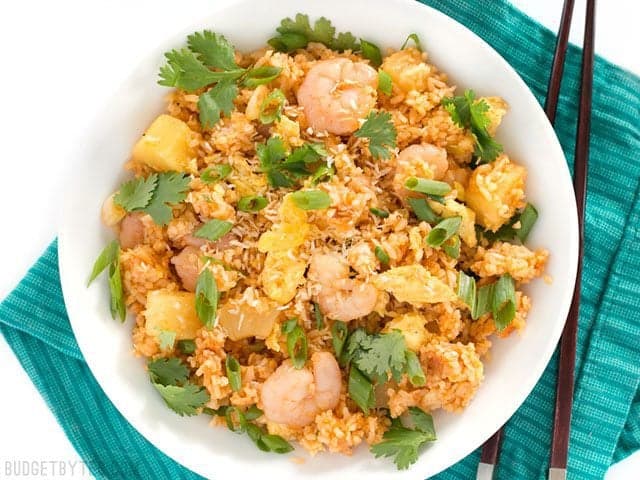 That toasted coconut gives the most wonderful flavor AND texture to the fried rice. 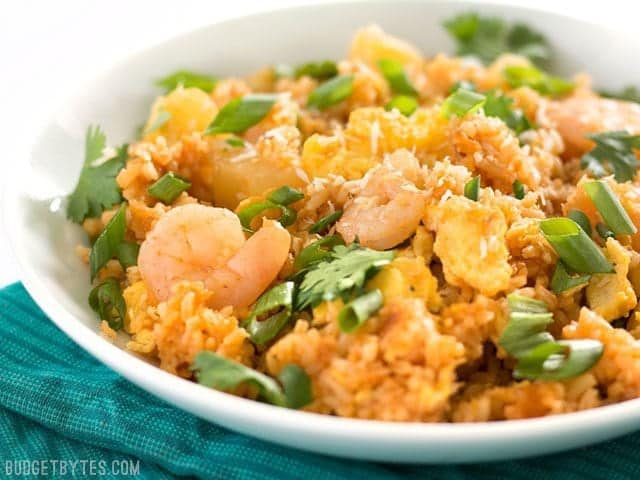 😍 Sticky rice or not, this Shrimp Stir Fried Rice is the bomb! 💣