I’ve been craving nachos ever since the Super Bowl. Seeing every single blog and food website feature nachos during the weeks leading up to the big game made them impossible to resist, so I finally gave in and made thes Nacho Taters

I switched up my nachos to make them at least a little bit healthier. Instead of fried tortilla chips, I’m piling my nacho toppings on top of baked potatoes. Yeah, yeah, potatoes aren’t the best thing for you… or are they? Potatoes are quickly becoming the newest “bad for you” turned “good for you” food, like its predecessors butter and coconut oil. Just when you think something’s bad for you, science goes and discovers that it’s a miracle food (please note my sarcasm). So anyway, that helps me feel a little better about my nacho taters. ;)

I made my own red enchilada sauce for these Nacho Taters, but if you don’t feel like doing that you can use store bought enchilada sauce or even your favorite taco sauce (got a drawer full of Taco Bell packets? I kinda hope not, but if you do…). I stuffed my taters full of black beans, corn, pickled jalapeńos, cheddar cheese, and green onion. You can use whatever toppings you normally like on nachos, but here are a few more ideas: taco meat (ground beef, chicken, or turkey with taco seasoning), black olives, cilantro, diced tomato or pico de gallo, avocado, or sour cream. However you pile ’em up, potatoes make a great base for nachos. NOM. 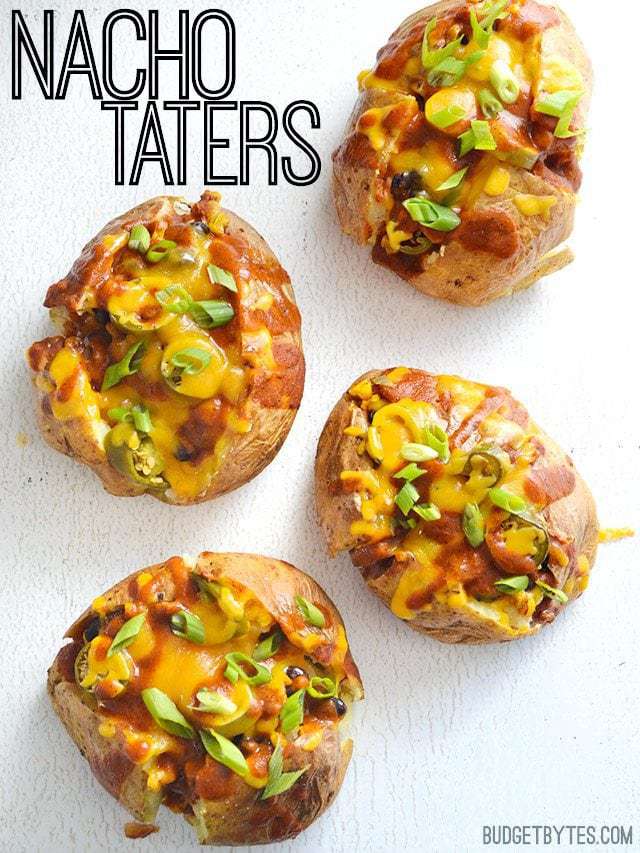 4.94 from 15 votes
Pile your favorite nacho toppings into a baked potato for a filling and meal-worthy version of your favorite junk food: Nacho taters.
Author: Beth - Budget Bytes 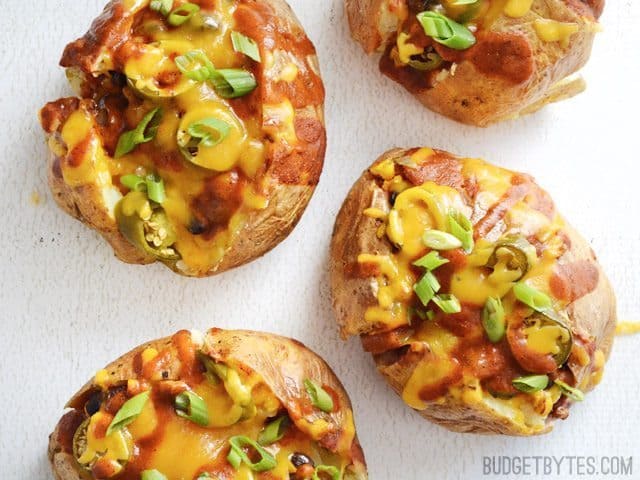 *If you don't want to make homemade enchilada sauce, substitute with one cup of store bought enchilada or taco sauce. 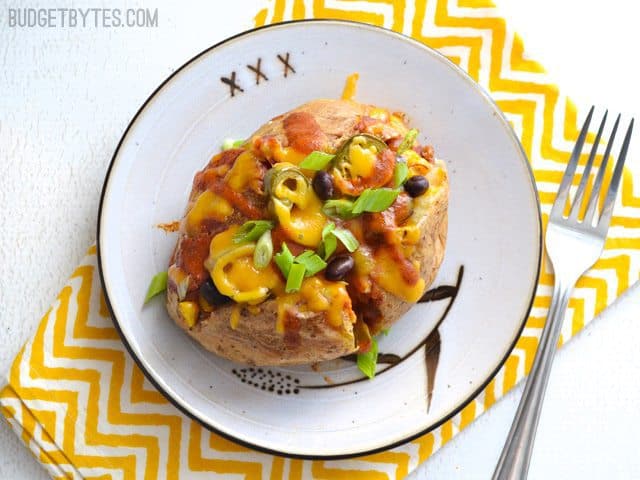 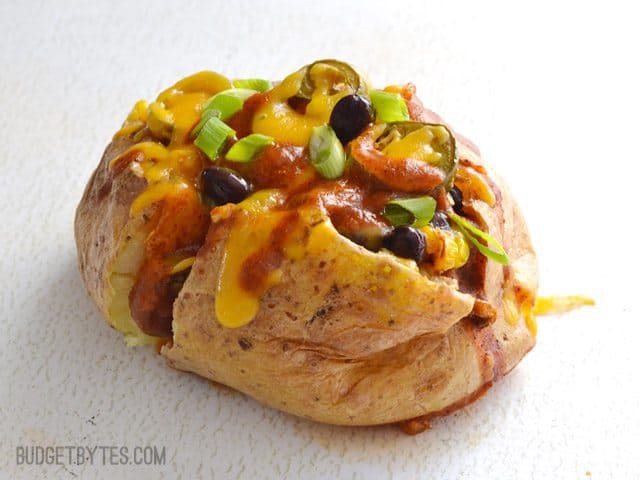 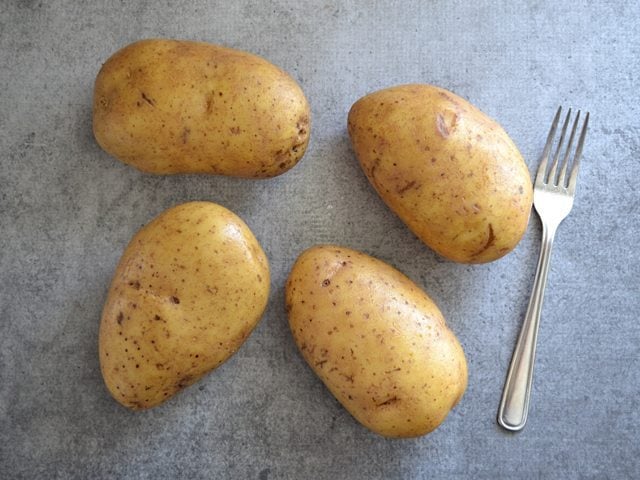 Preheat the oven to 400 degrees. Start out with four russet potatoes, about one pound each. Wash them well, then dry them off with a paper towel. Rub vegetable oil all over the outside of each one (this helps the skin get nice a crispy), then prick several times with a fork to allow steam to escape. No one wants exploding potatoes. 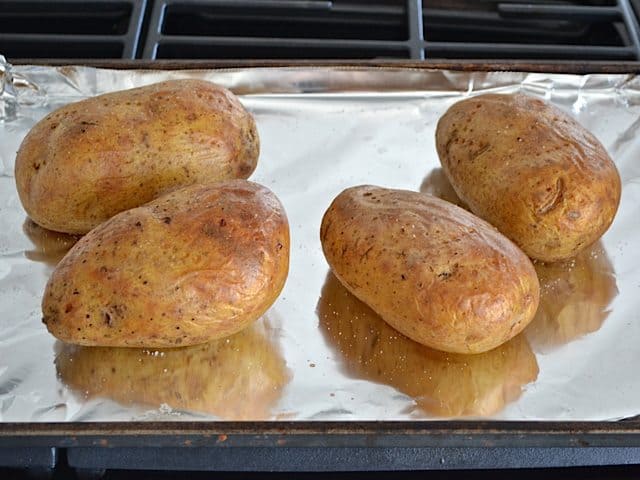 Place the potatoes on a baking sheet covered in foil, then bake for 45-60 minutes, or until the potatoes are soft all the way through (you can test by piercing with a fork through the top, or squeezing gently with a towel covered hand). 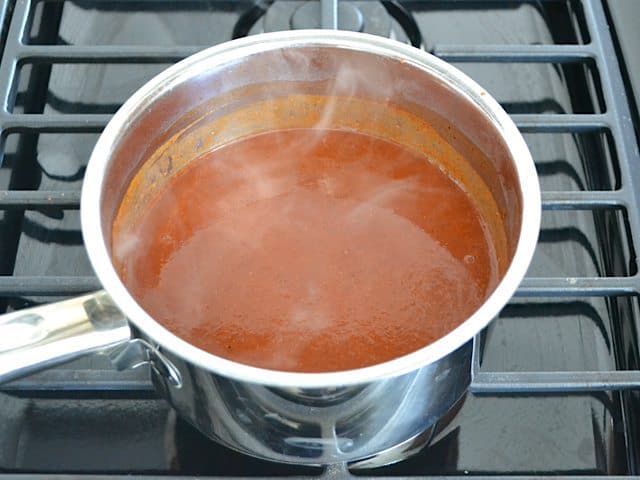 While the potatoes are cooking, make the red enchilada sauce. This only takes about ten minutes, so once it’s done you can set it aside. You can cut the enchilada sauce recipe in half and use a very small pot, or just make the whole thing and make your taters extra saucy. If you don’t want to make your own, you can use store bought taco or enchilada sauce. 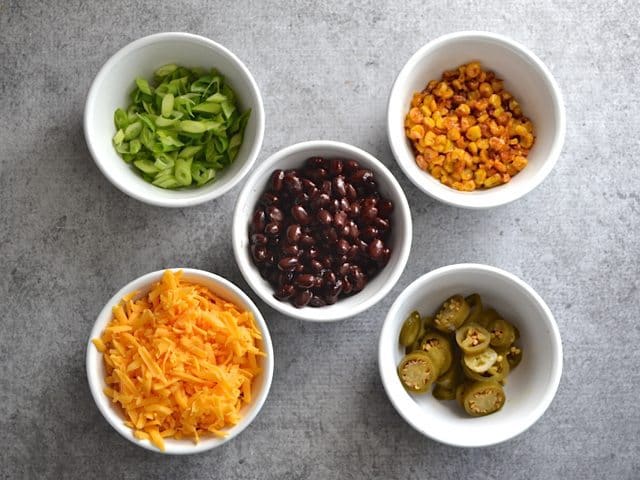 You can also prepare the toppings while the potatoes are baking. Slice three green onions and 2-3 jalapeños, shred 4oz. of cheddar, rinse and drain a 15oz. can of black beans, and let 1 cup of frozen corn thaw. Why does my corn look so funky (top right corner)? Because I decided to make cumin roasted corn in the oven while my potatoes were baking, but it added absolutely nothing to the end product, so I’m not writing that part into the recipe. They were dry and not so great, so just let your corn thaw so it’s nice and sweet and juicy instead. 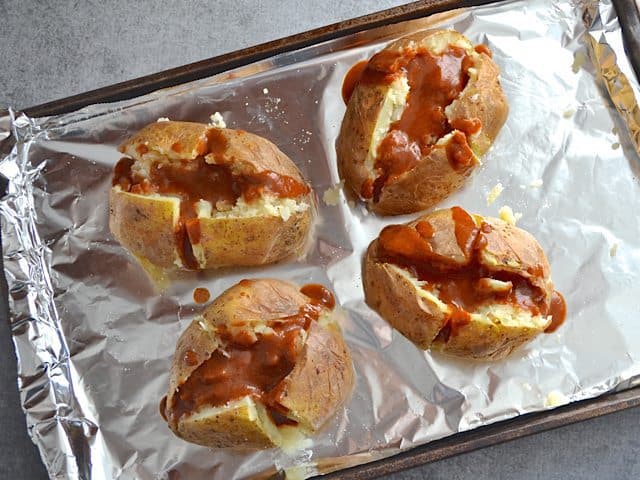 Once the potatoes are finished baking, remove them from the oven, but leave the oven on (they’ll go back in for a few minutes once topped). Slice them open and mash up the insides just a bit. Drizzle a couple tablespoons of enchilada sauce over each one. 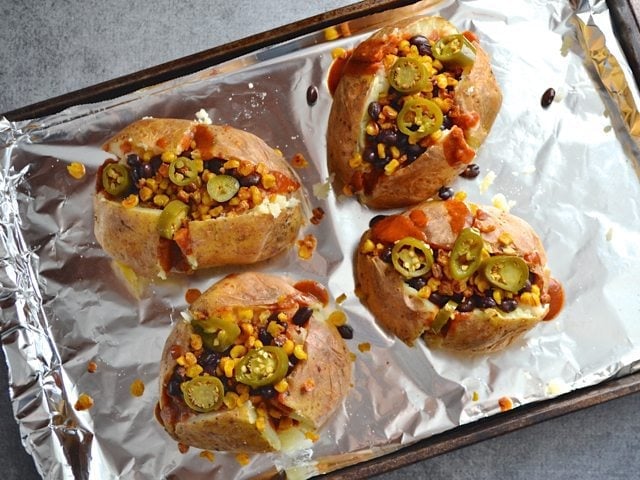 Then add your black beans, corn, and jalapeños. 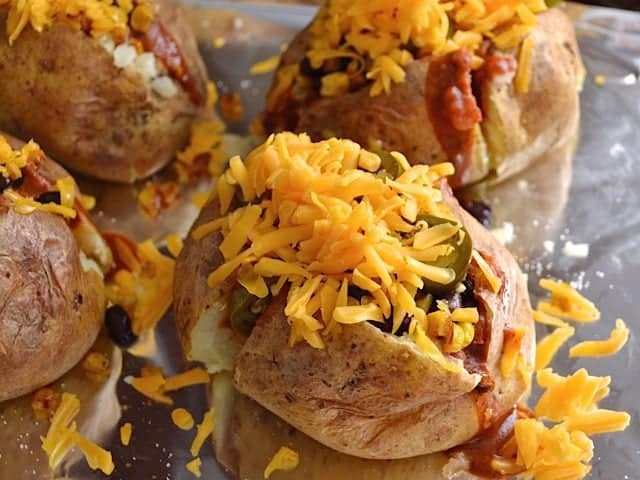 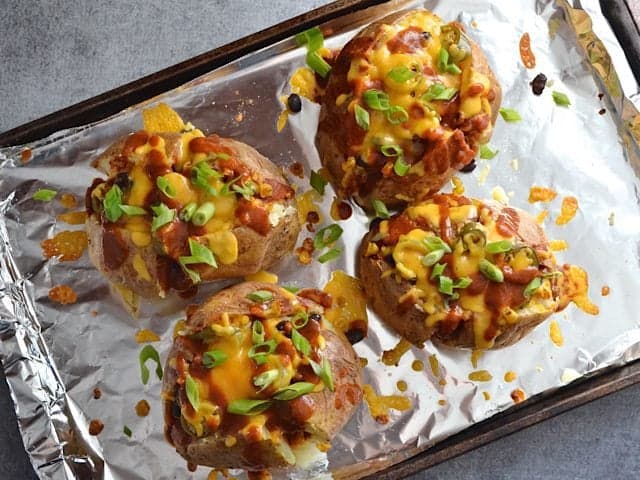 Pop them back in the oven for a few minutes to melt the cheese. Once melted, drizzle a little more sauce on top and finish off with the sliced green onions. 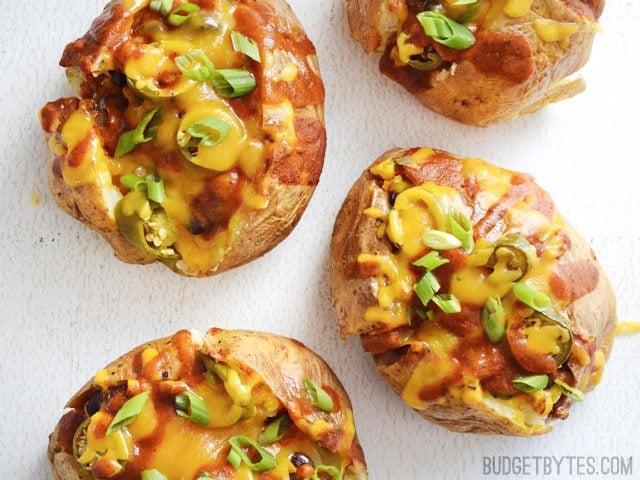 Are those not the best looking spuds you’ve ever seen? 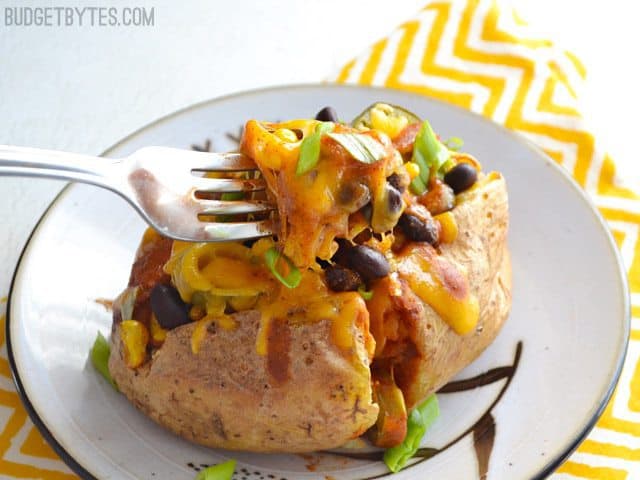 Whoever said baked potatoes were boring?