Um, if you’ve never had smashed potatoes before, let this be a sign from the universe that you need to make them immediately. These tasty little taters are boiled until fluffy and tender on the inside, then smashed and baked until crispy on the outside. Then I went one step further (because of course I did) and loaded them up with my favorite baked potato fixins’. These Loaded Smashed Potatoes are everything I’ve ever wanted.

What Kind of Potatoes Work Best for Smashed Potatoes

I highly suggest splurging a little on small baby potatoes, the kind that are about the size of a golf ball. They cook quickly and have the perfect skin to flesh ratio to make these smashed potatoes just right. Plus, they are always so smooth and creamy on the inside.

I kept my smashed potato toppings fairly simple because I like to work with what I have on hand. I seasoned with some Everything Bagel Seasoning, then topped with cheddar, sour cream, and green onion. Here are some other toppings you can try:

What to Serve with Smashed Potatoes

The classic flavors in these smashed potatoes go with so many different meals and they can add a fun twist to your usual “meat and potatoes” dinner. Try them with my Baked Chicken Drumsticks, Honey Mustard Chicken Wings, Brown Sugar Roasted Pork Loin, Easy BBQ Chicken Sandwiches, or Homemade Chicken Nuggets. Or just serve them on their own as a snacky-snack for movie night or something. ;)

5 from 6 votes
These loaded smashed potatoes are boiled until tender and fluffy, baked until golden and crispy, and piled high with toppings!
Author: Beth – Budget Bytes 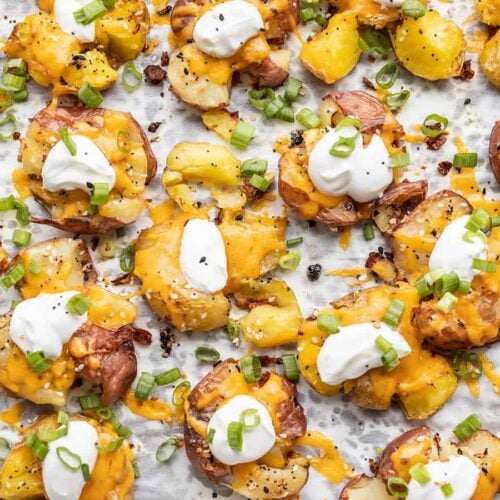 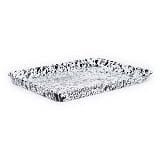 *the sodium content listed below includes the salt added to the boiling water, most of which is discarded when the potatoes are drained.

How to Make Loaded Smashed Potatoes – Step by Step Photos

While the potatoes are boiling, preheat the oven to 425ºF. Line a large baking sheet with parchment paper. Combine 2 Tbsp olive oil and ½ Tbsp everything bagel seasoning in a small bowl.

Transfer the drained potatoes to the baking sheet and use a heavy-bottomed glass to smash them until they’re sort of flattened.

Brush the oil and seasoning over the surface of the smashed potatoes.

Bake the smashed potatoes in the preheated 425ºF oven for about 30 minutes, or until they’re golden brown and crispy on the edges. Then remove them from the oven and top with shredded cheese (about 1 cup total). Return them to the oven for a few more minutes to melt the cheese.

Once the cheese is melted, remove them from the oven again and top each potato with a tiny dollop of sour cream, then sprinkle sliced green onions over top.