Congee is a savory rice porridge that I’ve wanted to make for quite some time. It’s a warm, comforting porridge made with rice, chicken, ginger, and sometimes other fun ingredients. Congee usually needs to simmer for quite some time, so the Instant Pot is a great way to make congee fast, but I’ve included stovetop directions for everyone else (it’s ridiculously simple either way). So, even though I’ve titled this “Instant Pot Congee”, don’t pass up this gem of a recipe just because you don’t own a trendy IP. It’s just toooooo good not to try. 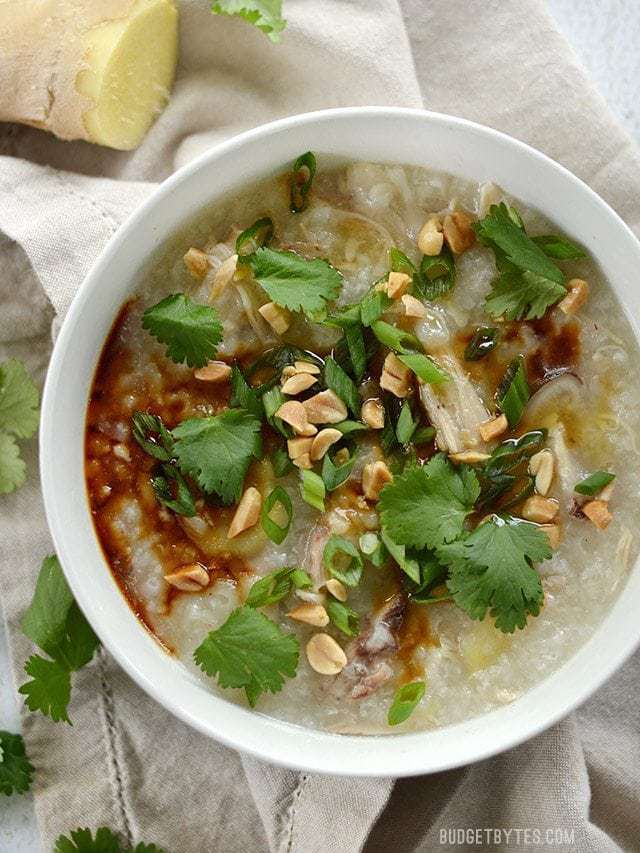 Congee is a rice porridge that is a staple food in several countries in Asia. You’ll find many different versions and names for this dish, depending on the region, but they all have one thing in common–they’re warm, comforting, and filling. The base for congee is rice that has been cooked for an extended amount of time in water or both until it breaks down into a really thick porridge. It can be as simple as that, or it can have extra ingredients added, like meat and aromatics, to make it more of a full meal.

But that’s just a snapshot of the history and culture surrounding this classic comfort food. If you’d like to try an authentic congee recipe and learn more about congee, I highly suggest checking out these resources:

Congee is a fairly mild dish, but the flavor is deep. Oh so deliciously deep. This version, made with chicken, has a mild chicken flavor, with a little extra umami kick from mushrooms, and a lovely ginger base note. I found the congee to be so velvety smooth and delicious that I could happily slurp it up on its own, but when I started adding fun toppings the meal was elevated to super-star status.

I’d suggest using at least the base toppings that I have listed on the recipe card below:

Beyond that, the sky’s the limit. I gave the congee the “soft boiled egg and sriracha” treatment because I add those two things to just about everything, but the congee was really quite filling on its own, so I probably won’t opt for an egg in the future. The sriracha was a nice touch, though.

Here are a few other topping ideas:

But really, anything goes here. Sweep the kitchen! 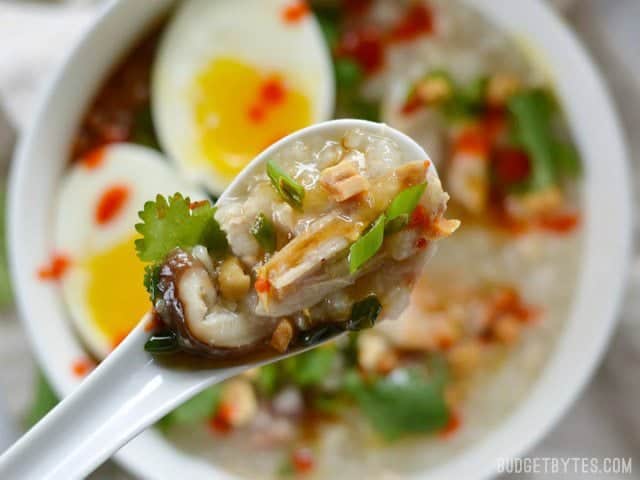 4.78 from 45 votes
Instant Pot Congee is a warm and comforting porridge with endless possibilities for fun toppings. This classic dish is made easy with modern equipment.
Author: Beth - Budget Bytes 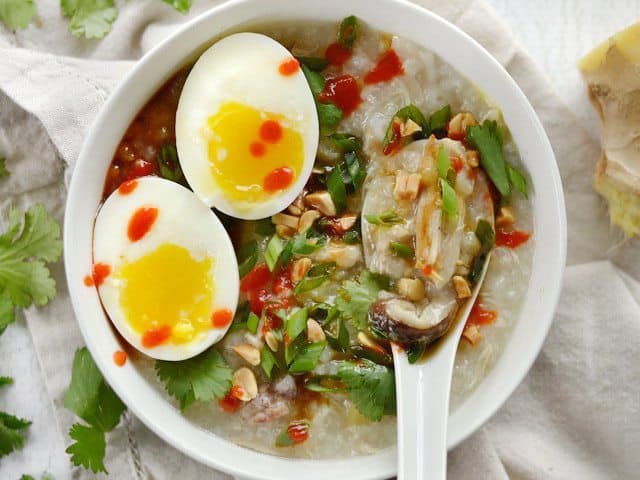 To make on a stove top: Use 10 cups water instead of seven. Add all the ingredients (minus toppings) to a large pot. Place a lid on top and bring to a boil over high heat. Once it reaches a boil, reduce the heat to low and let simmer for 1-2 hours, or until a thick porridge forms. Stir the congee often while simmering, replacing the lid each time. Once thick, continue with shredding the meat and seasoning with salt as described above. 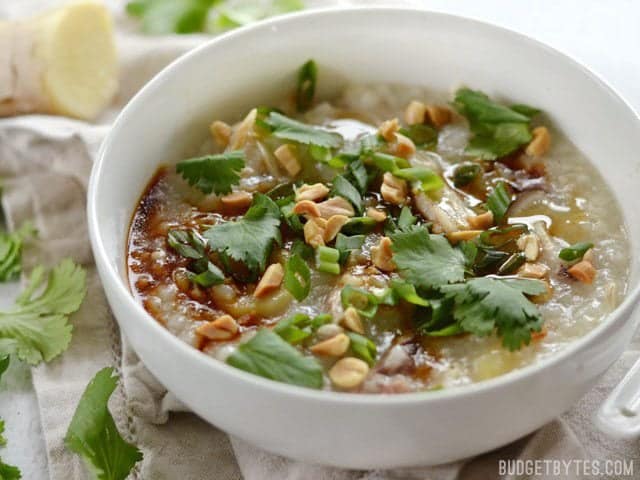 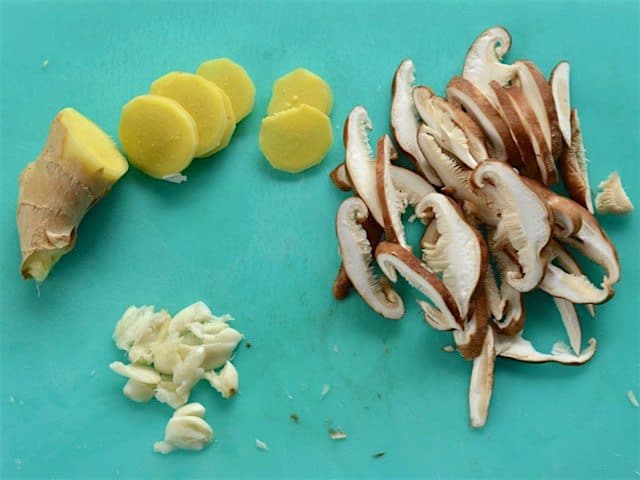 Start by peeling and slicing 1-2 inches of ginger (I really like ginger, so may use more next time). Thinly slice three shittake mushrooms and crush two cloves of garlic. Shittake mushrooms are pretty expensive ($8.99/lb. at my local stores), but since they’re mostly air and weigh next to nothing, I was able to get three fairly large mushrooms for $0.63. Not bad. 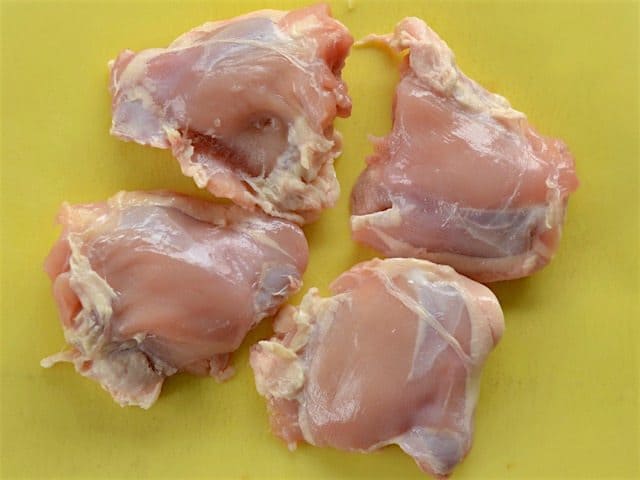 Remove the skin from about 2 lbs. of bone-in chicken pieces. Dark meat is going to give you a lot better flavor than breasts, so I highly suggest you stick to thighs and drumsticks. You can remove the excess fat as well, but I found that it made the porridge incredibly rich and velvety. Plus, trimming the fat is tedious. Ha. 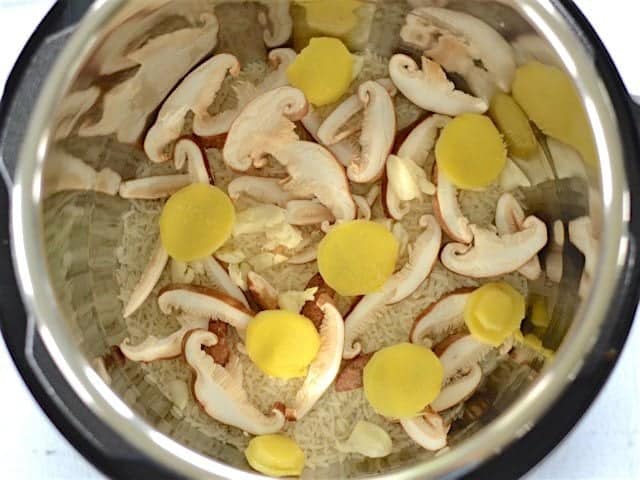 Place one cup uncooked jasmine rice in the bottom of the Instant Pot and add the ginger slices, crushed garlic, and sliced mushrooms on top. 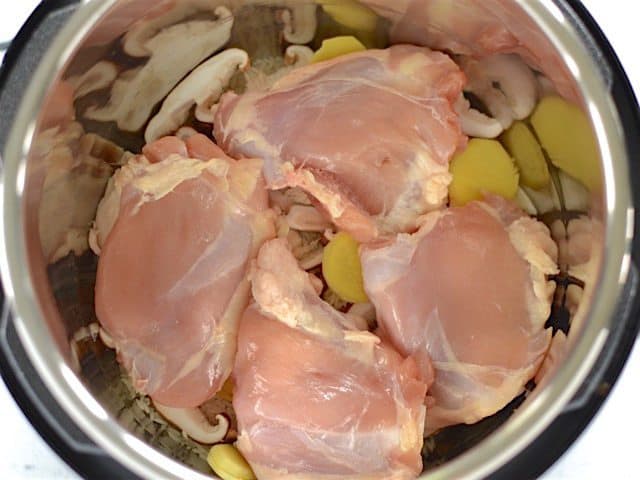 Then add the chicken pieces… 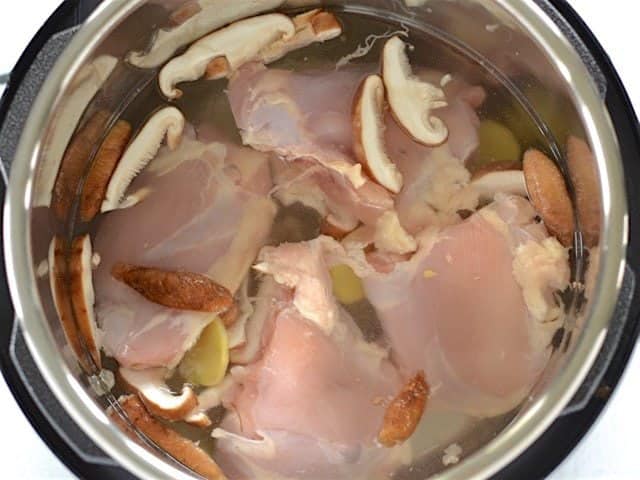 If you’re making this on the stove top, just add all the ingredients listed above to a large pot, but use 10 cups water instead of 7 (you’ll get a lot more evaporation with the stove top method). Bring the pot to a boil (with lid) over high heat, then reduce to low and let simmer for 1-2 hours, stirring often, or until a thick porridge has formed. If the porridge is too thin after that time, simply let it simmer without a lid until it thickens. 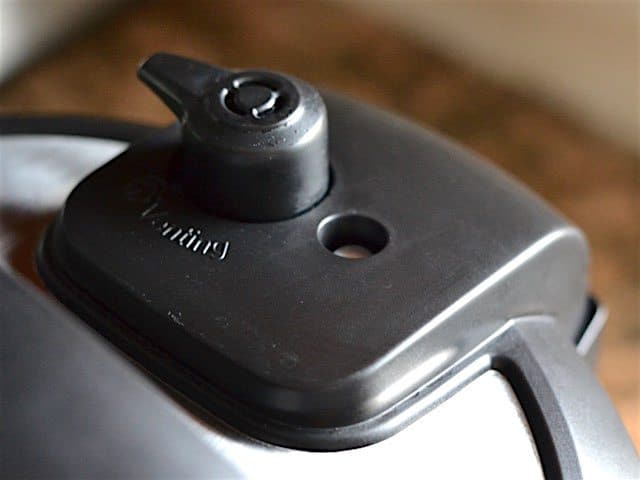 Close and lock the lid on the Instant Pot and turn the steam release valve (on the left in the photo) to the “sealing” position. Notice the float valve on the right, the small metal circle, is down. This means there is no pressure in the Instant Pot. 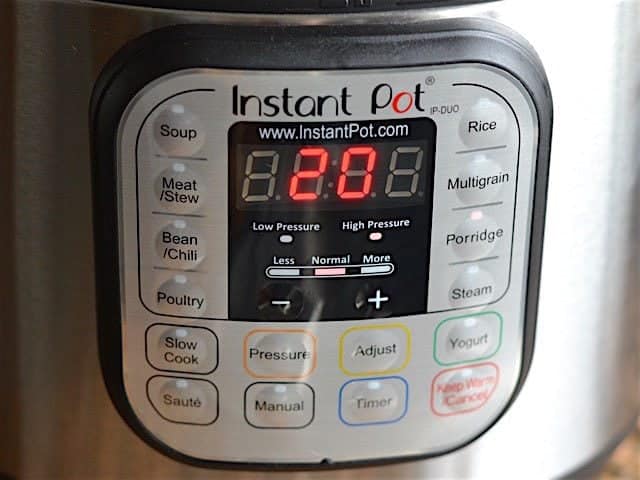 Press the “porridge” button over there on the right and it will turn on to the automatic setting of 20 minutes at high pressure. No need to adjust, just wait ten seconds for it to begin. 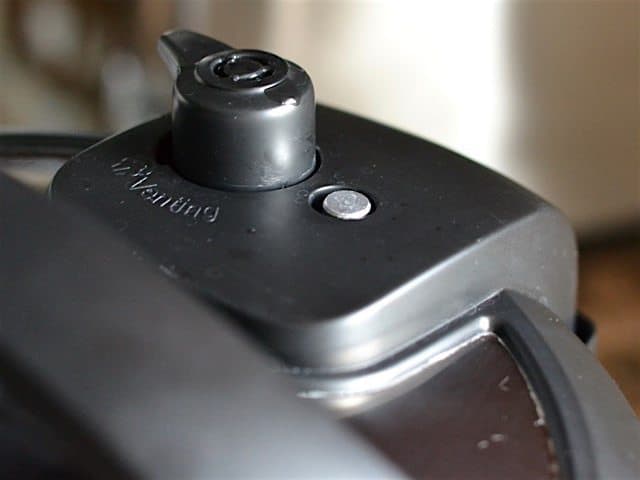 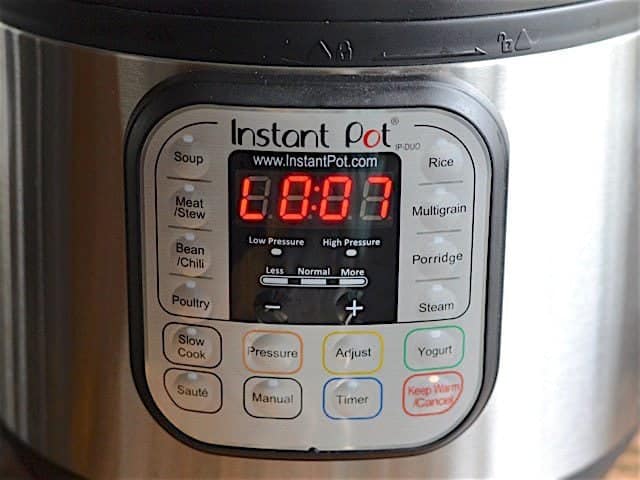 After cooking with high pressure for 20 minutes, the Instant Pot will beep and change to “keep warm” mode. The display will show an “L” and start counting up the time (it’s at seven minutes in the photo). Let the pressure naturally come back down, which may take 15 minutes or so. You’ll know the pressure is safe when that metal float valve has fallen back down. 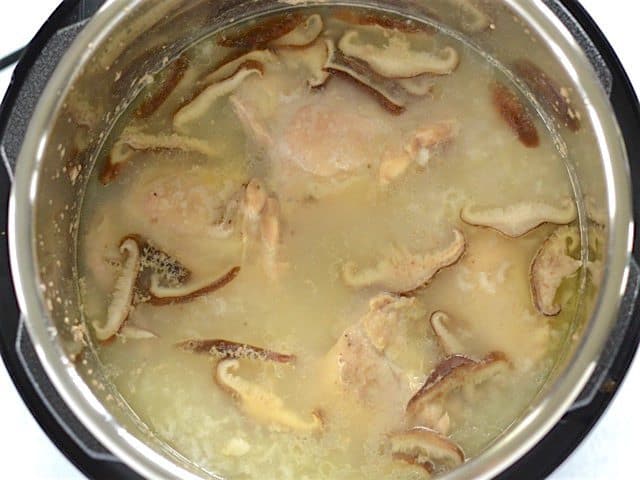 Once it’s back down to safe pressure, open the steam release valve, then open the lid. It will look a little something like this. It looks a little watery on top, but once it’s stirred it thickens right up. Carefully remove the chicken pieces with tongs and place them on a clean cutting board. 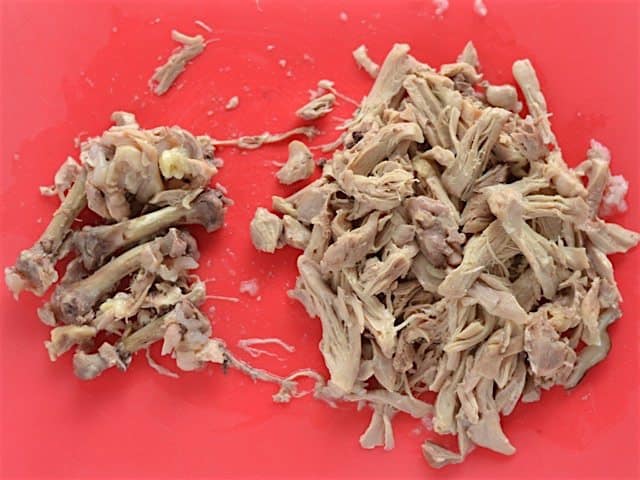 Use two forks to shred and pull the meat from the bones. The meat should be so tender that it literally falls apart when you touch it. 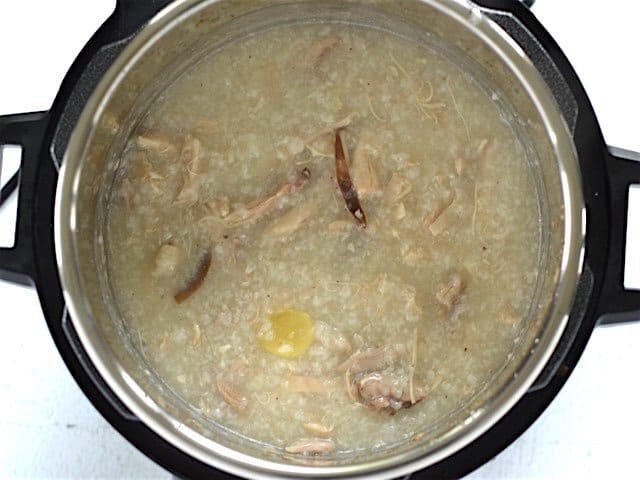 Stir the shredded meat back into the congee. Give it a taste and add salt to your liking (I added 1/2 Tbsp). You want enough salt to make the flavors pop, but not so much that you wouldn’t want to add soy sauce as a topping. 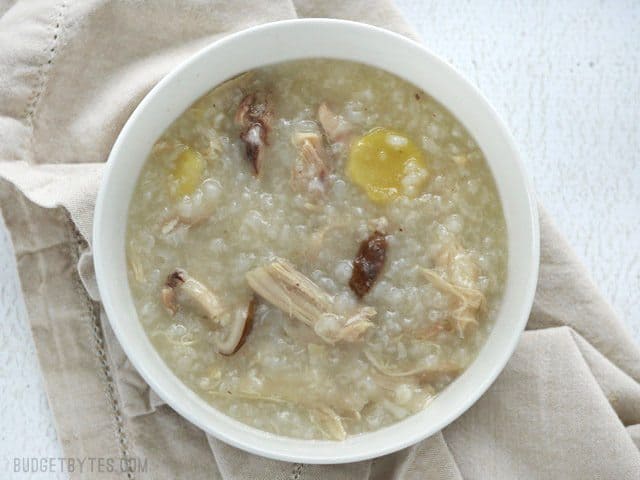 Ladle some congee into a bowl… I gotta say, too, that I love those ginger slices. They become quite mild through the cooking process and have a texture similar to water chestnuts. They’re SO GOOD. More ginger slices next time for sure. 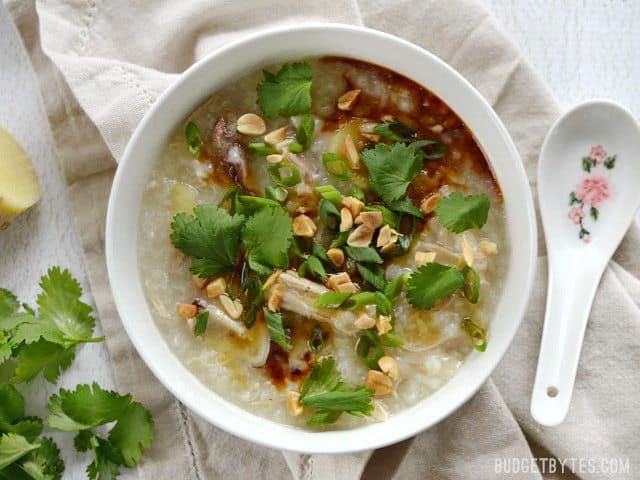 At a minimum, I’d suggest adding a small drizzle of toasted sesame oil & soy sauce to each bowl, along with some sliced green onions, cilantro leaves, and chopped peanuts to your Instant Pot Congee. The chopped peanuts were truly a delight. They added wonderful texture. 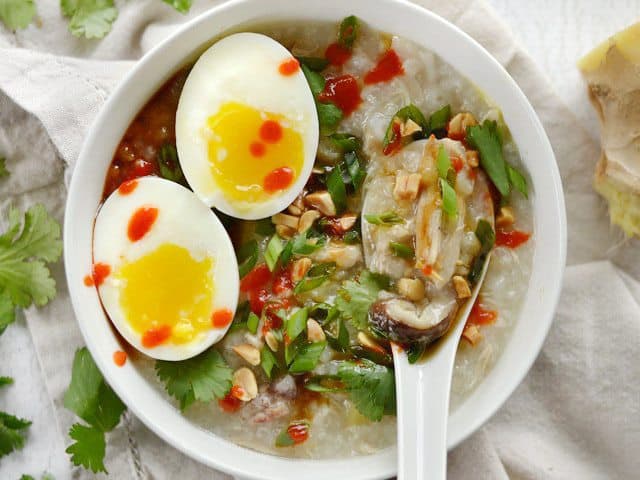 Or, you know, you could go crazy and add a soft boiled egg and some sriracha too… Cuz why not? Make your Instant Pot Congee your own!