Looking around my kitchen the other day I took note of a few leftovers that I had from the last few recipes. I had a couple chorizo links in the freezer left over from my Chorizo and Sweet Potato Enchiladas, and a couple pounds of baby red potatoes left over from my One Pan Roasted Kielbasa and Cabbage Dinner. So, I decided to throw them together with some bell peppers and onions to make one big epic pan of Chorizo Breakfast Hash. ‘Cuz let’s be real, breakfast is the best meal. 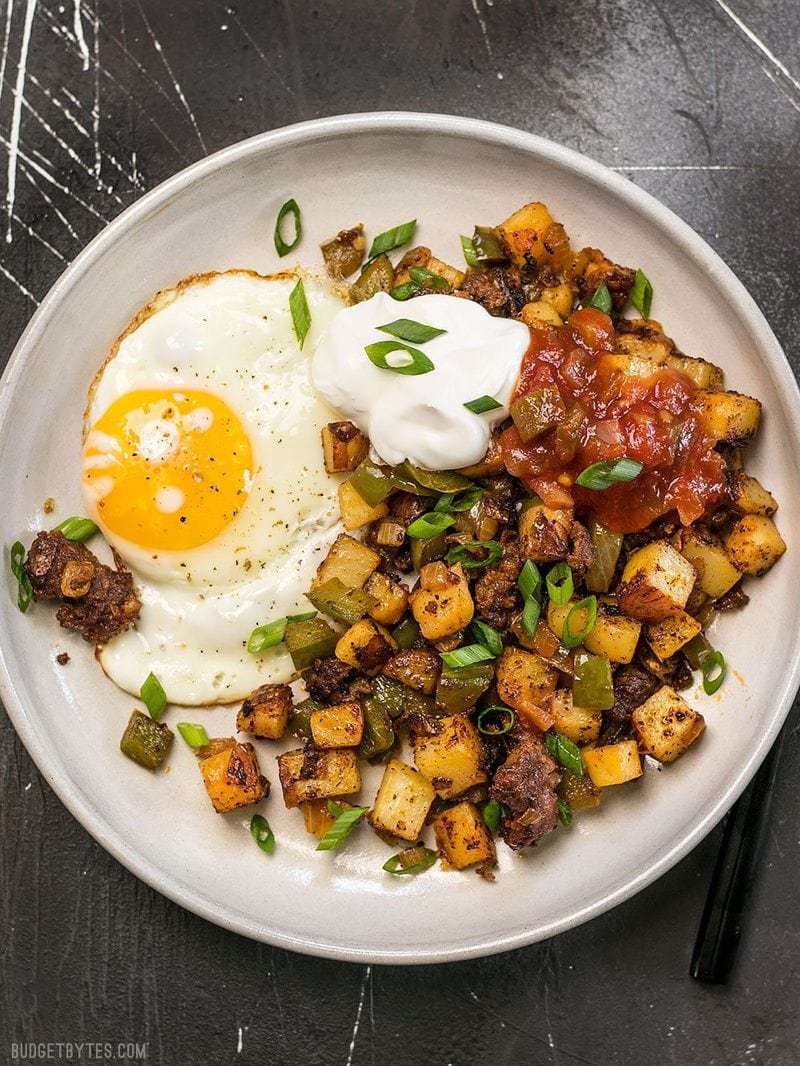 It’s all about the Chorizo…

Chorizo is the star of the show here and its built in herbs and spices are enough to season almost everything else in the dish, so I don’t suggest skipping it. Several people have mentioned in my other chorizo based recipes that store-bought Soyrizo works really well, or here’s a recipe for making soy “chorizo” at home.

You’ll want to use some sort of non-stick pan for this, whether it be cast iron or teflon, because starchy potatoes like to stick. Even with a non-stick surface, you need oil to get that nice crispy texture, so don’t be shy. This is hash. That’s just the way it is! :)

How to Serve Chorizo Breakfast Hash

4.78 from 18 votes
This simple but tasty Chorizo Breakfast Hash is a breakfast classic. Perfect for your lazy weekend brunch, or even "breakfast for dinner".
Author: Beth - Budget Bytes 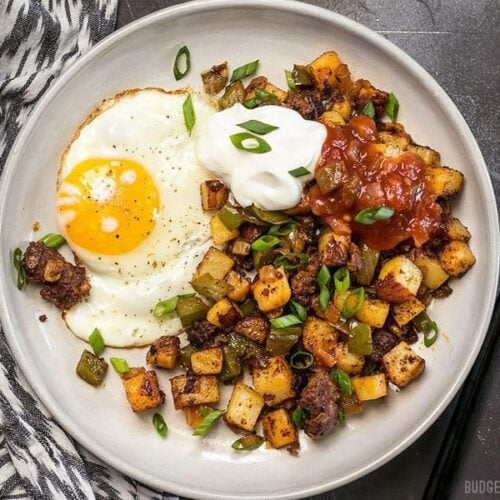 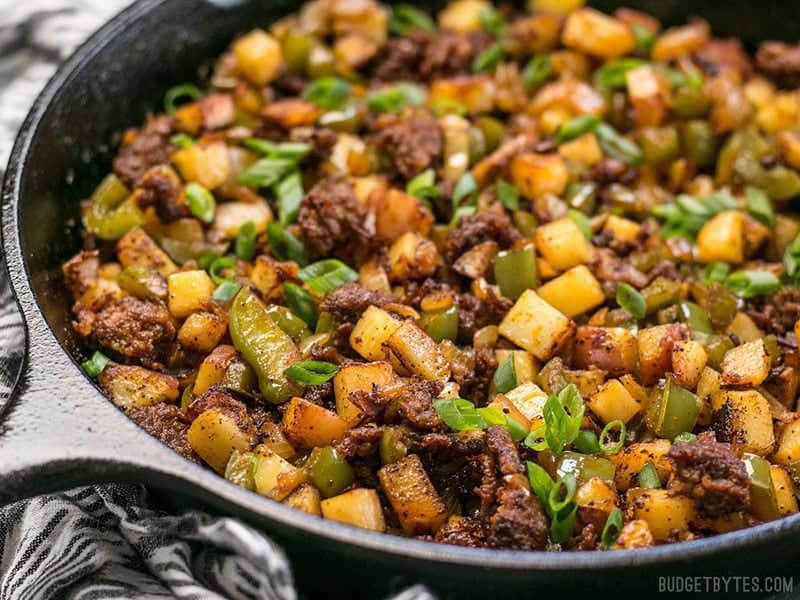 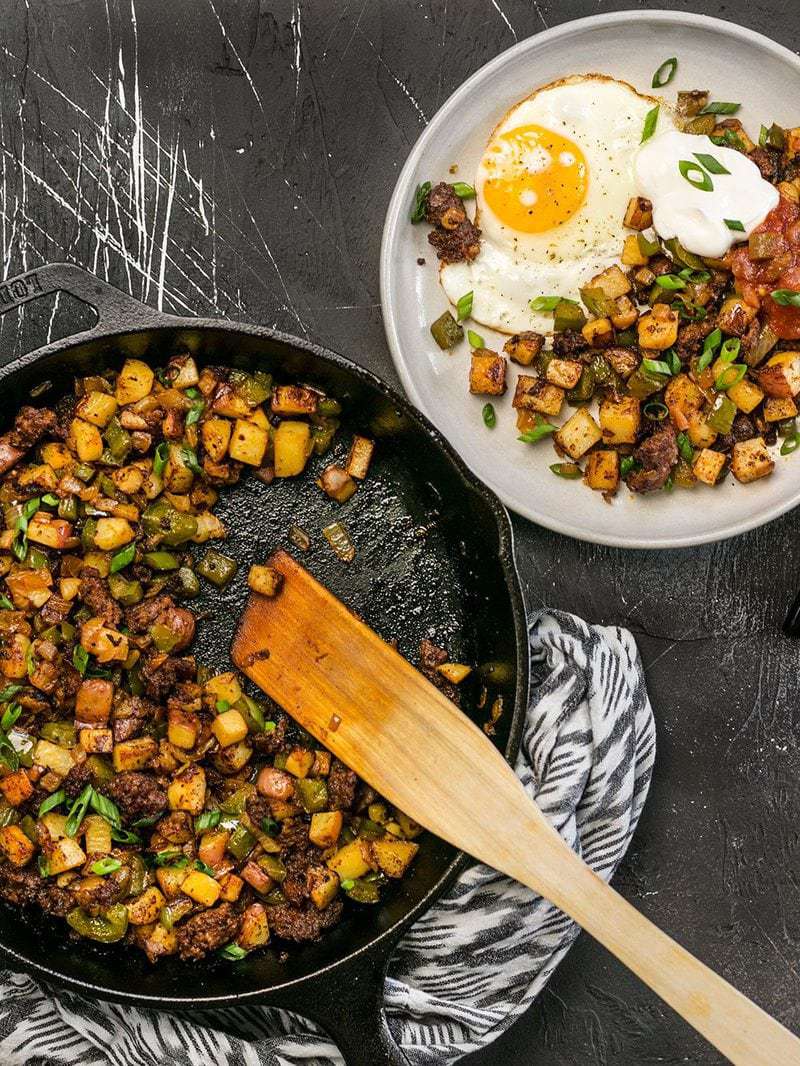 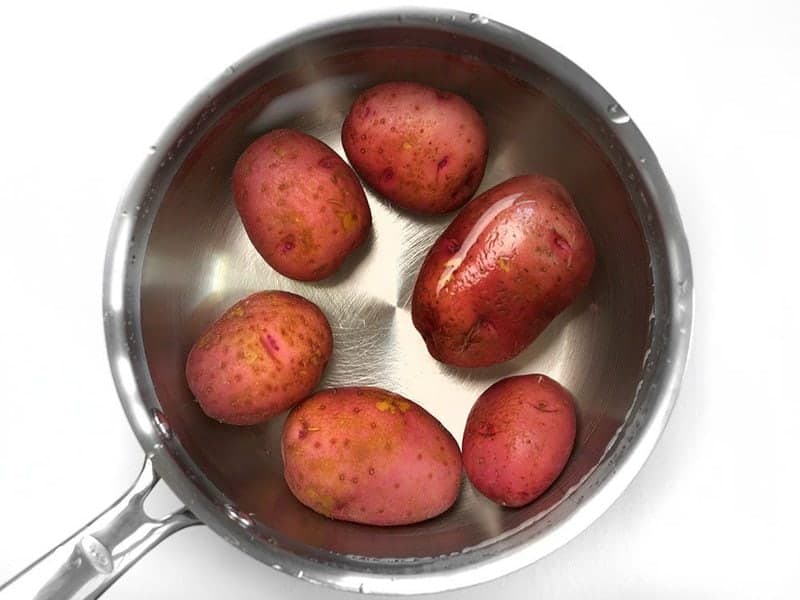 Wash about 1 lb. of baby red potatoes, then add them to a large sauce pot and cover with water. Place a lid on the pot and bring it up to a boil over high heat. Boil the potatoes just until you can pierce them with a fork, but they’re not falling apart (you need to be able to cube them). Drain the potatoes and let them cool slightly. These potatoes look large in the photo, but they’re actually tiny (egg-sized). 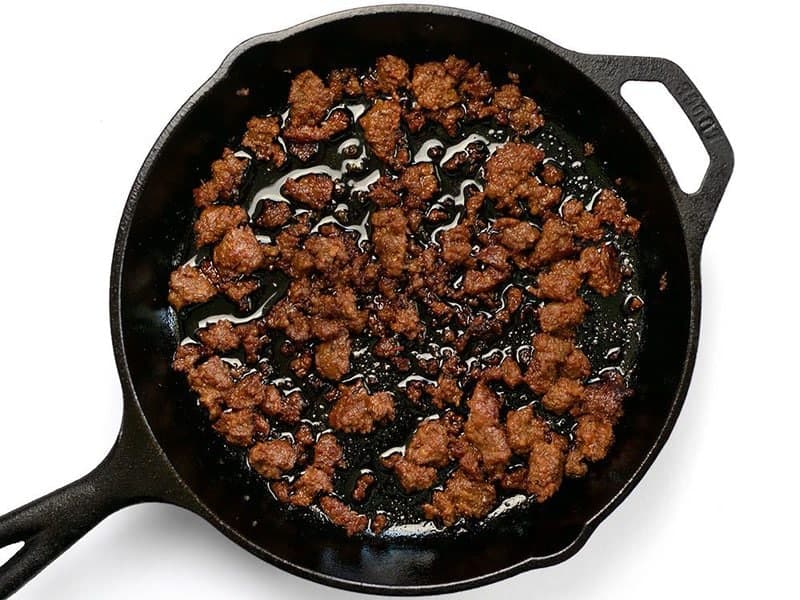 While the potatoes are boiling, brown 1/2 lb. chorizo. I use Johnsonville chorizo, which comes in links, so I needed to squeeze it out of the links first. Break the chorizo into smaller pieces as it browns. Cook the chorizo until it’s nice and crispy and brown on the outside. The oil that comes out of the chorizo is flavored with its herbs and spices, and will be used to cook and flavor the rest of the vegetables. 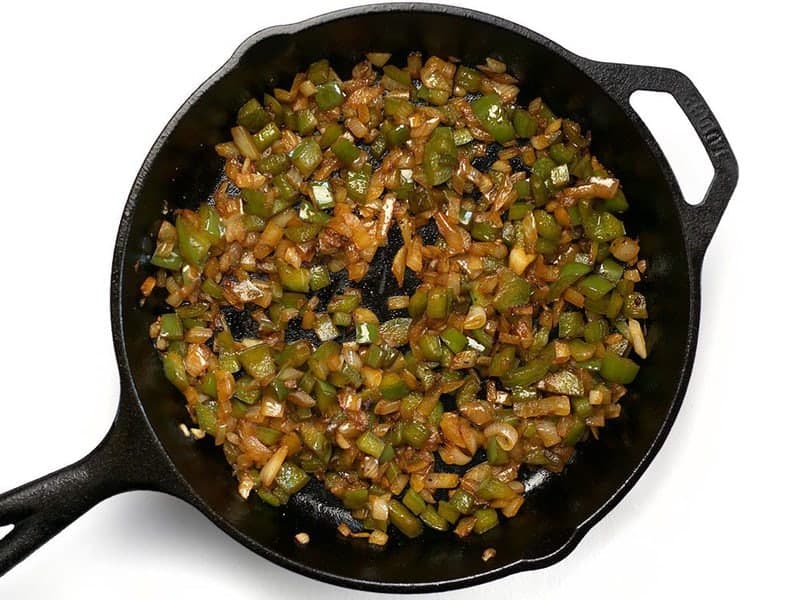 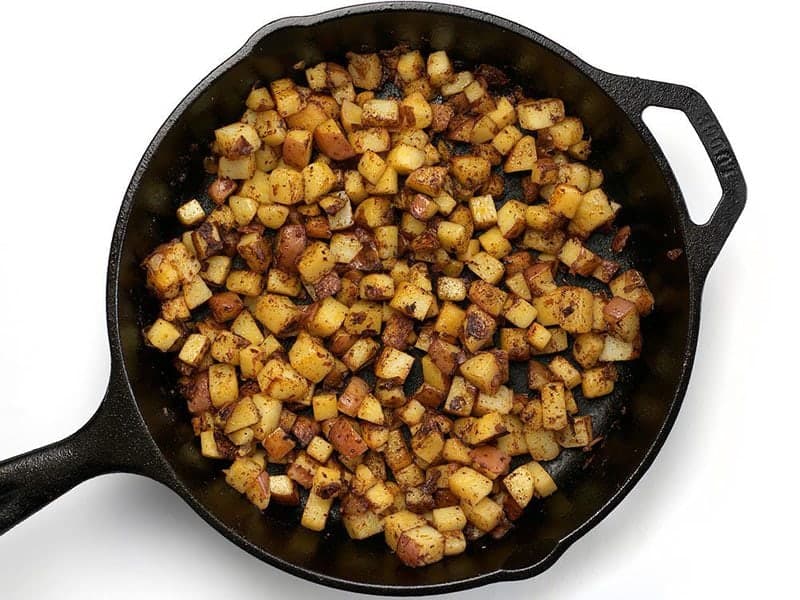 While the bell pepper and onion are cooking, finely dice the boiled potatoes. Add another tablespoon of oil to the skillet and make sure the surface of the skillet is well coated in oil. Add the diced potatoes, along with another pinch of salt and pepper, and 1/2 tsp chili powder. Cook the potatoes until they are brown and crispy. It’s important to let the potatoes cook in the oil without stirring for a few minutes at a time to allow them to form that brown crispy exterior. 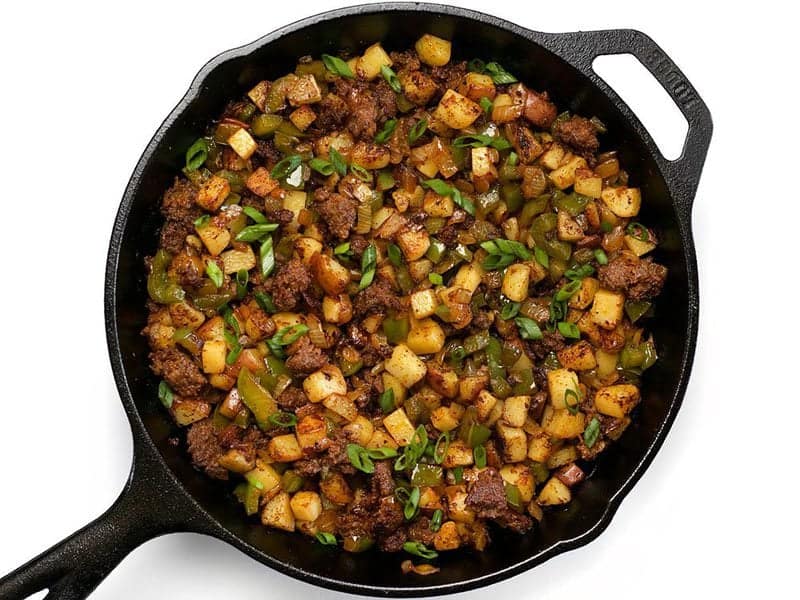 Once the potatoes are crispy, add the chorizo, bell pepper, and onion back to the skillet. Stir to combine, then sprinkle sliced green onions over top. 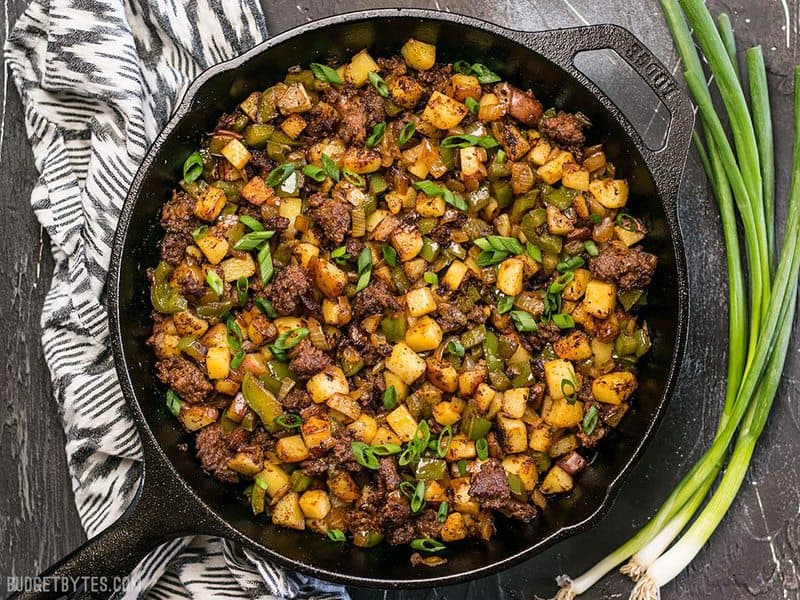 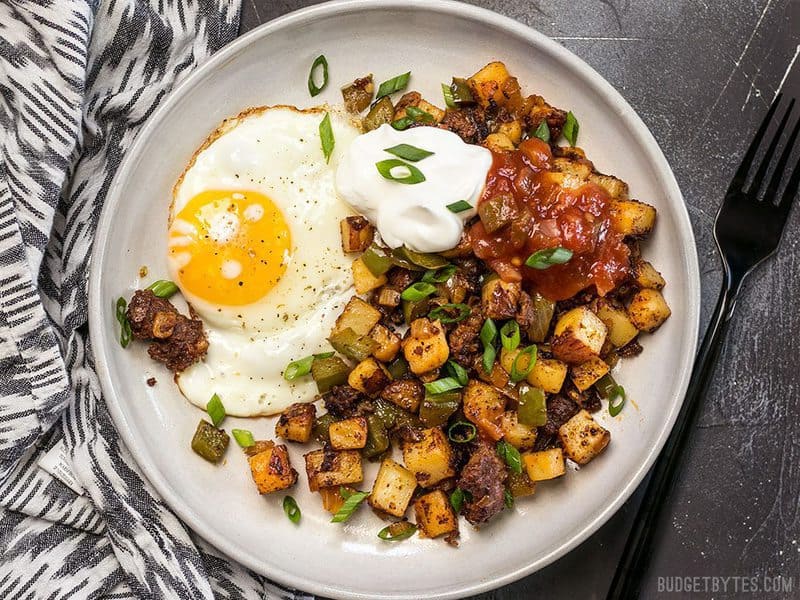 Pair it with a fried egg and top it with a little sour cream and salsa! YUM! Sunday brunch, here I come!