Happy Friday, Y’all! I hope you have great plans for the weekend. I’ll be cooking up some good stuff, but before that it’s time to check in with my weekly recap for last week (1/21-1/27). 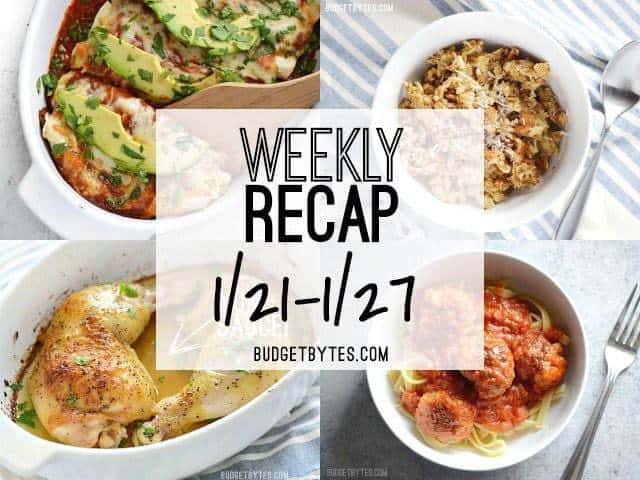 It was a pretty good week. We ate well, had a good balance between meat and vegetables, and I came in just a few dollars below my $40 budget.

If you remember, last week I impulse bought a bunch of Italian sausage that was on sale, so I decided to use that this week to make some Skillet Meatballs. Spaghetti and meatballs is one of my favorite comfort foods, so that was the first recipe to go on my list. Instead of making my own sauce, though, I opted for the easy route and purchased a jar of sauce. I was also in the mood for enchiladas, so that was the second recipe to go on the list. Lastly, I wanted more baked oatmeal, so I decided to try a banana coconut version to use up some old bananas I had stashed in the freezer and the shredded coconut that’s been in my pantry for-ev-er. Oh, I also had tentative plans to maybe try roasting chicken to find an affordable replacement for my rapidly forming rotisserie chicken habit. So, that was the plan: spaghetti and meatballs, enchiladas, baked oatmeal, and maybe roasted chicken. 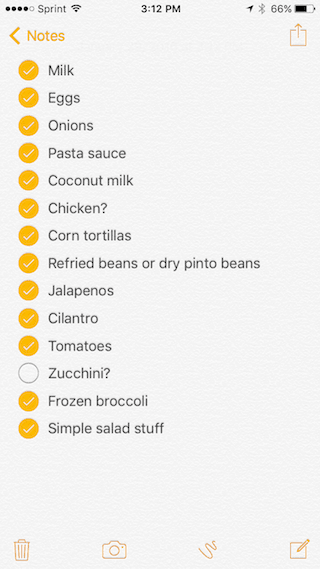 As usual, I listed the staples that I needed to replenish first: milk, eggs, and onions. I wasn’t sure yet if I was going to make my refried beans from scratch or buy a can, so I wrote both, intending to compare prices against my laziness once I was at the store (I bucked up and made the beans myself to stay in budget). I listed zucchini as a maybe because I wasn’t sure at that point if I wanted plain bean enchiladas, or if I wanted to make a zucchini corn filling, like these tacos. I decided on simple bean and cheese. Looks like I forgot to put cheese on the grocery list, but at least I didn’t forget to buy it!

I was kind of craving a simple salad and I thought that would go nicely with the spaghetti and meatballs, so I left it as a general category so I could check prices on salad items once I got to the store. I ended up buying a head of romaine and a few tomatoes, and called it a day. I dressed it with some Caesar that was already in my fridge and a light sprinkle of Parmesan.

And lastly, I added a bag of frozen broccoli to the list because it’s good to just always keep it on hand for emergency Bowties and Broccoli or a quick Oven Roasted Broccoli side. :)

Here’s what the receipts looked like for those items: 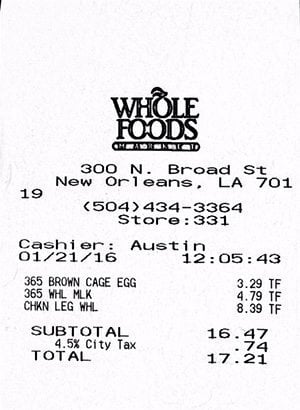 There wasn’t much on sale that I needed at Whole Foods this week, so I did the bulk of my shopping at the local store to stay within budget. I think the price for avocados was actually better at WFM, but I missed that one. Newman’s Own pasta sauce was on sale for about the same price as the generic this week, so I grabbed a jar of that. Yay!

I ended up buying four whole chicken legs for $2.99/lb., which was a good price for WFM. Of course, when I went back this week they were only $2.49/lb. LOL. I’ll have to time that better next time I restock. :)

And here’s the photos of my haul: 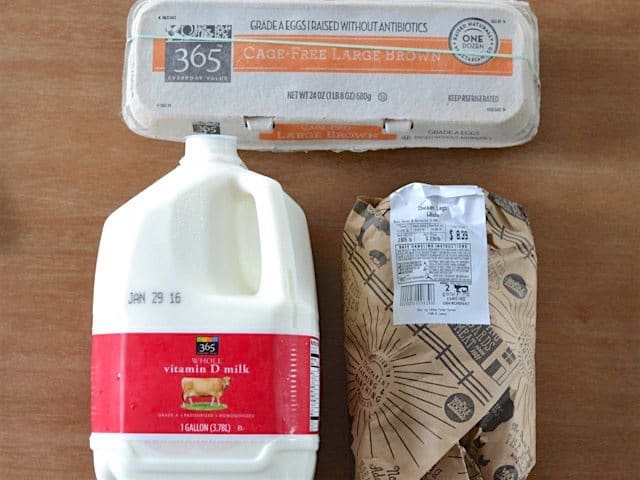 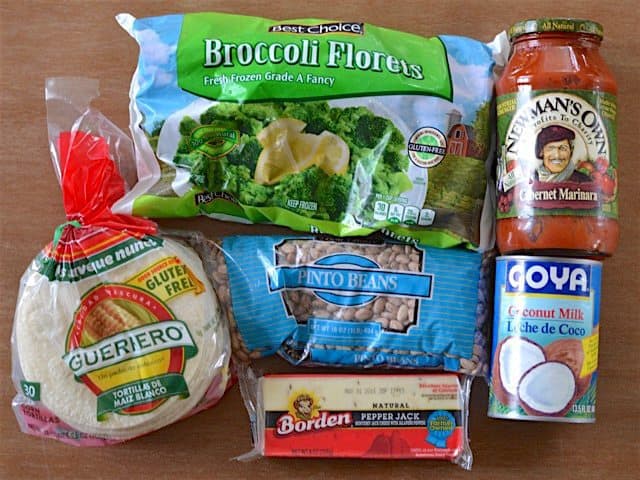 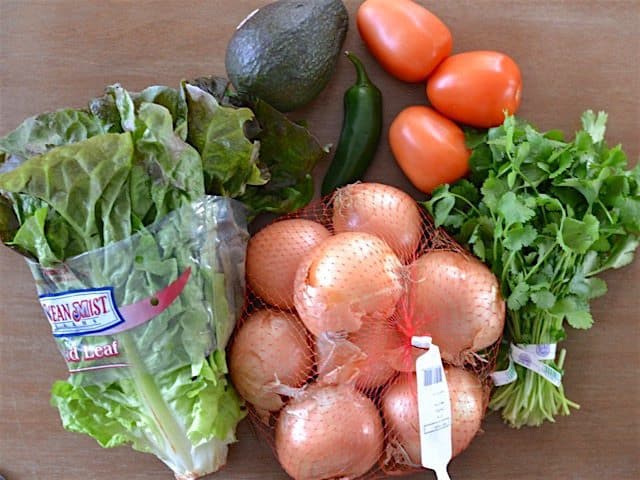 No fruit this week? Well, I forgot to mention, a friend of mine gave me a whole bag of blood oranges from the tree in her back yard. They’re so amazing and beautiful! #lucky 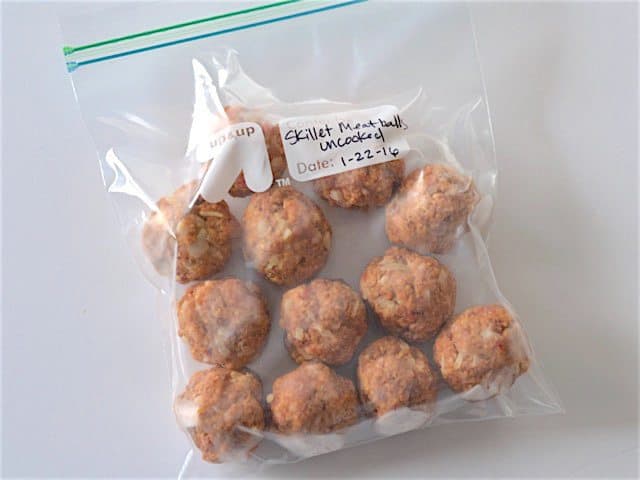 As mentioned above, the first thing I made was some Skillet Meatballs with the Italian sausage that I had purchased the week before. These were a great choice for my grocery shopping day because they’re super fast and easy. I actually only cooked half of them and froze the other half to supplement my meal plan another week. :) Because they’re kind of big, I got about four servings out of the 12 that I cooked. I already had “leftover” pasta in my pantry (half used bags), so all I had to buy for this meal was the sauce. 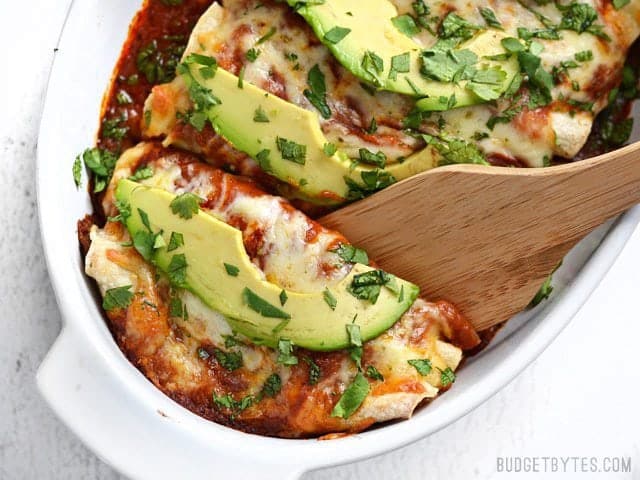 The next day, I made a batch of these amazing Weeknight Enchiladas. One of the reason’s they were so delicious is that I made my own (not) Refried Beans for the filling. If you haven’t tried those (not) Refried Beans yet, you’re missing out. Even better, I used my Instant Pot to make the beans so it was super fast (30-45 minutes or so?) instead of hours. 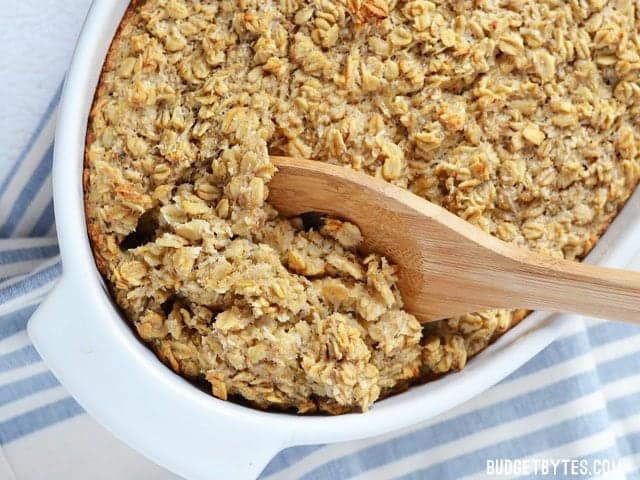 Next up was this rich Banana Coconut Baked Oatmeal. I used up a bag of frozen bananas that were nearly black and some shredded coconut that was in my pantry. All I had to buy for this recipe was a can of coconut milk. :) The flavor of these baked oats was almost like a little mid-winter blast of the tropics. 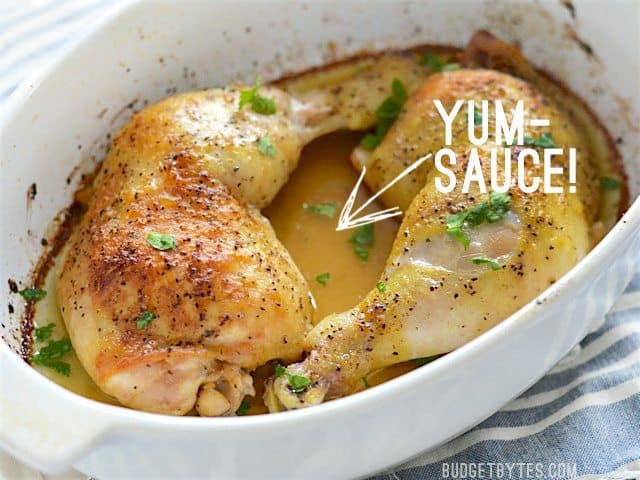 I took two of the four chicken legs that I bought and roasted them in the oven all nice and slow like, to try to mimmic the rotisserie chickens that I’ve grown to love so much. This is a really easy way to prepare chicken (as long as you have the time) and made for a wonderful dinner with a side salad and some homemade bread. I can’t wait to try this technique with a different flavor of seasoning and maybe in my Instant Pot next time! 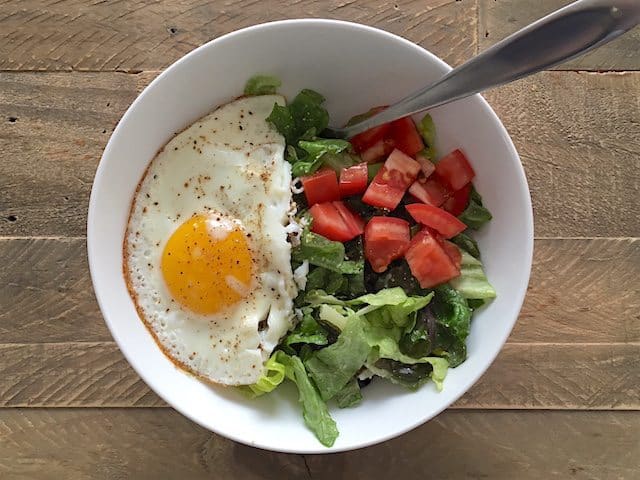 Speaking of side salads, that head of Romaine lettuce and three tomatoes gave me about six salads. We ate some with the chicken, and then for lunch one day I prepared us both these Caesar salads topped with a fried egg. The Romaine was tossed in creamy Caesar dressing and some Parmesan, then I added the tomato and fried egg. It looks small here, but I think that’s just the angle. This made a nice light lunch. Oh, and that runny yolk was awesome on it.

I used a lot of the leftover corn tortillas for little breakfast egg quesadillas this week, too (with a little sriracha, of course).

We also ate out twice this week, one of which times was at our favorite Indian restauarant. My Saag Paneer lasted me for two additional meals! Topped with an egg, of course. Because eggs on everything. ;)

When I was having my second “leftovers” helping of that Saag Paneer, I couldn’t help think about how I, without a doubt, could have eaten the whole thing the night we got the take out. Instead, I showed restraint and ate only until I was no longer hungry the first night, thereby avoiding that sick, over-full feeling (a feeling which, unfortunately, I am very familiar with). As a bonus for not making myself sick, I got to enjoy the meal two more times in the following days! Why is it so hard to eat that way when it has such a clear advantage (not feeling sick and prolonged enjoyment)? I guess it’s written in our DNA, but I’m definitely going to be more mindful of it in the future. :)

I think I ate too many eggs this week. LOL

P.S. I’ve been snapping photos of the things I’m putting in my freezer for an upcoming post about how I freeze my leftovers because so many of you have asked. So, stay tuned! :)