Okay, I might just have to make egg rolls all the time. They were so much easier than expected! And, because I decided to bake mine, they’re pretty freakin’ healthy. And, wow, super inexepensive! Just over 50 cents for two rolls? Yes please. Win, win, win!

Baking egg rolls definitely creates a different texture than frying, but I still liked them A LOT. It’s more of a “crunch” than a “crisp” when you bite in… But, if you wanted to fry these, they would be every bit as easy and probably even more delicious. If you don’t have a deep fryer, a couple inches of vegetable oil in a heavy bottomed skillet would probably do the trick. …I just have an irrational fear of frying things. I guess I’ve been badly burned one too many times and I know that one day it’s going to splatter on my face and that’ll be the end of me.

I also experimented with freezing the egg rolls uncooked. After freezing I put them straight into a hot oven without thawing. The texture was a little less than great but they were still delicious all the same. I will be freezing some the next time I make them. More about that in the photos at the bottom of the post.

There are a lot of step by step photos with this post, but don’t be mislead. It’s an easy process… I just wanted to catch every little step because most of this is hard to describe in words! 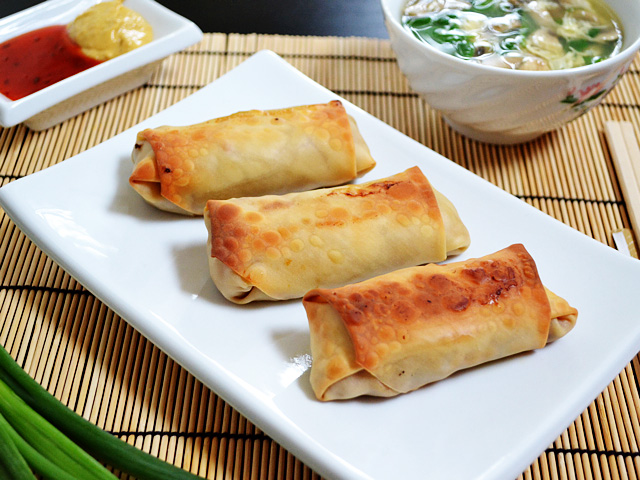 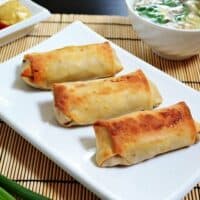 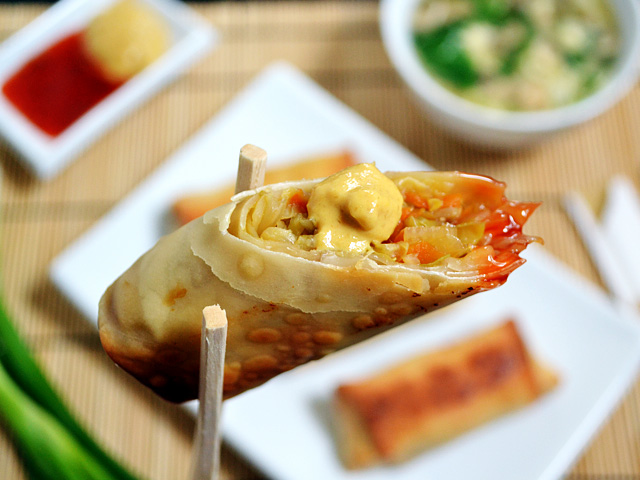 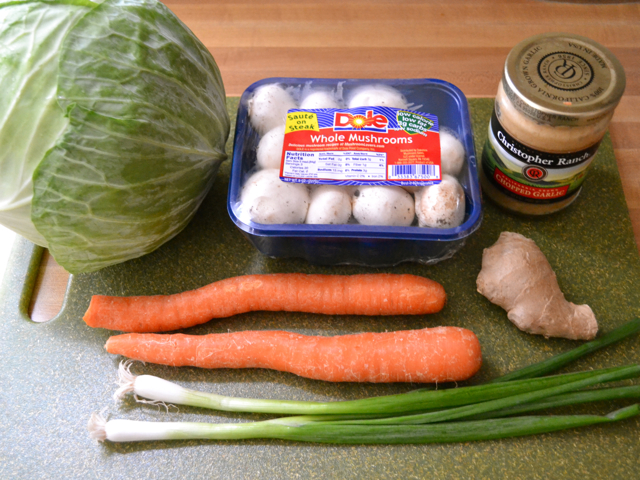 Start by prepping all of the vegetables so they’re ready to go. I used cabbage, carrots, mushrooms, green onion, ginger, and minced garlic (in the jar). 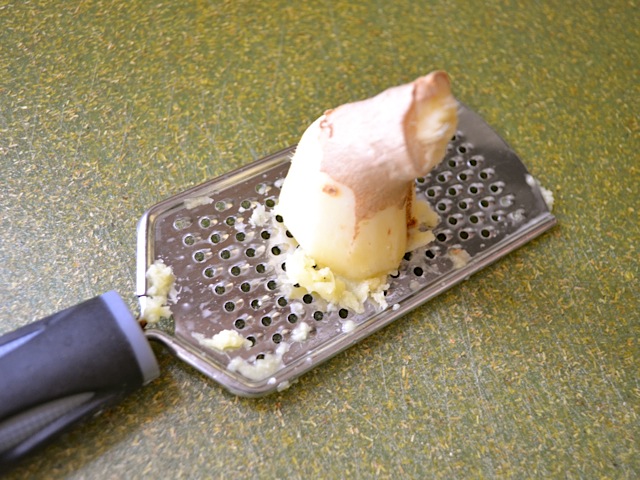 Peel and grate the ginger. I use a small holed cheese grater rather than mincing with a knife, and I grate it right over the skillet to catch any juices, which there are a lot of. 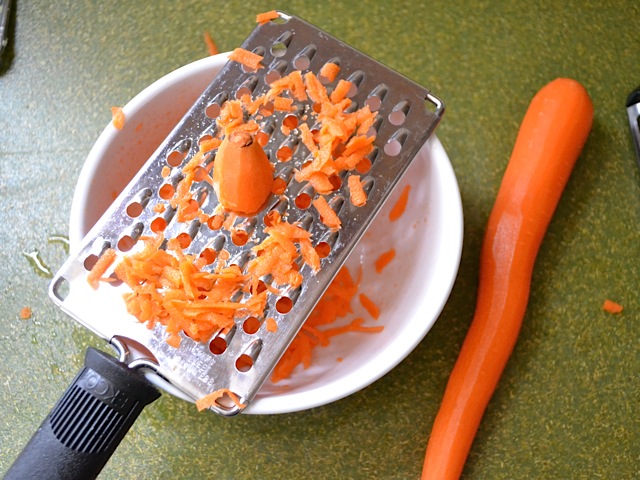 Peel and grate the carrot. I use a large holed cheese grater for this. I tried to use a mandolin ONCE and will never bother again! 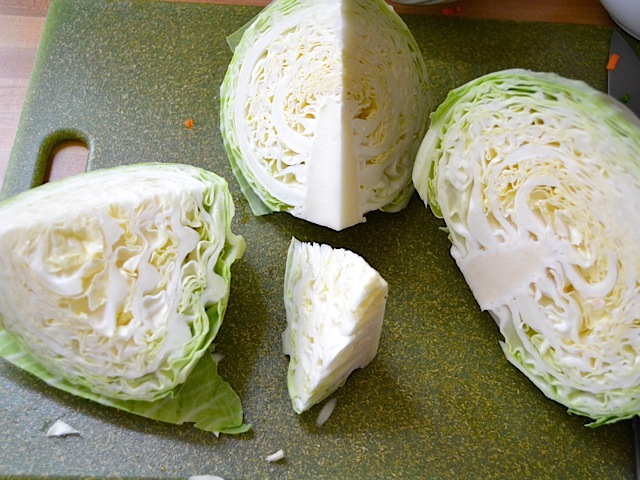 To shred the cabbage, first remove the wilted leaves. Next, cut the head into quarters and then cut the core off of each quarter. Then cut each quarter lengthwise one more time, and then cut crosswise into very thin strips. 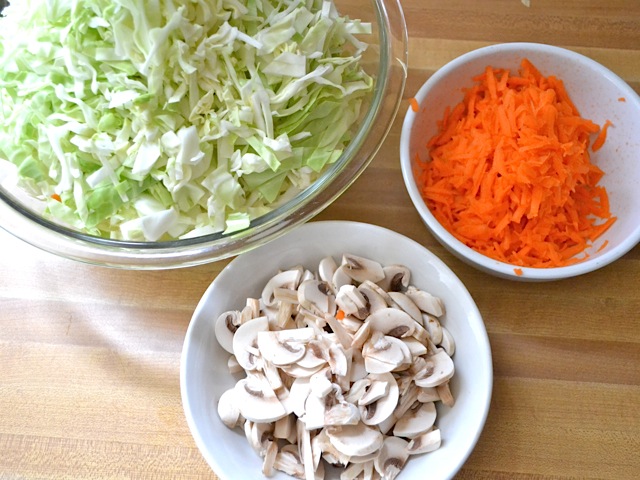 Once all of the veggies are prepared, you’re ready to cook. Sorry, no pictures on how to cut the mushrooms or green onion because I think you can probably do that part on your own… and if you can’t, just give it a shot. You can’t really mess those up! 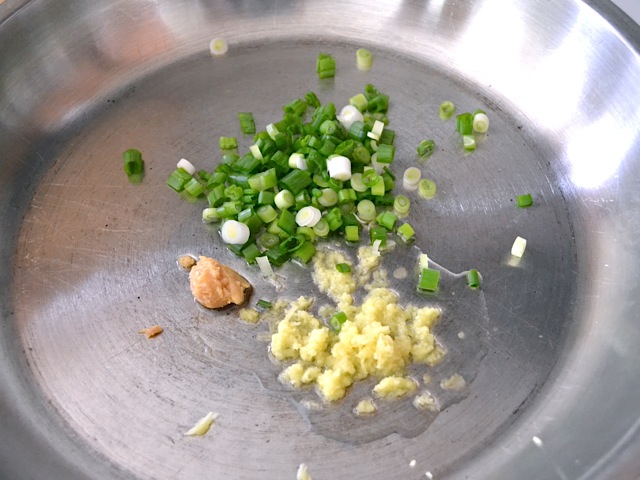 Start with the vegetable oil, garlic, green onion, and ginger in a very large skillet or wok. Heat over a medium flame. 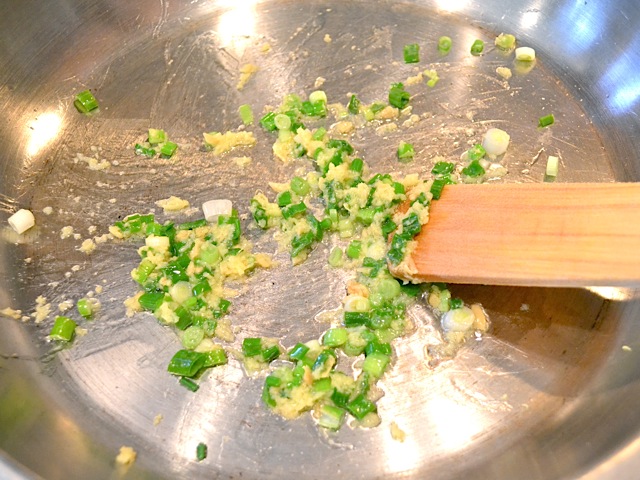 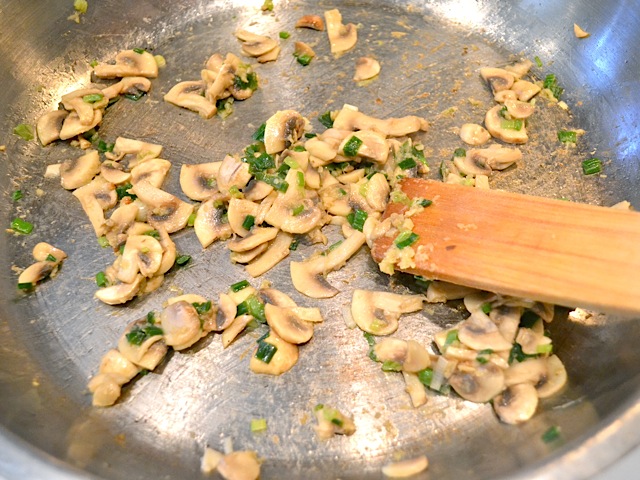 Then add the mushrooms and continue to cook until they’ve released all of their moisture (about 5 minutes). You don’t want soggy egg rolls. 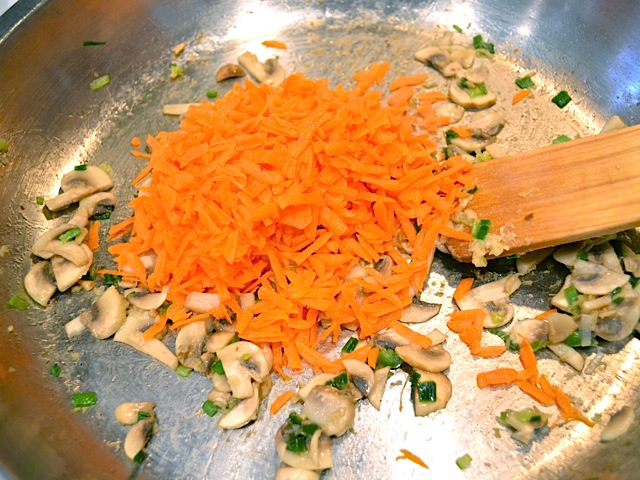 Add the carrot, cook for about a minute more. 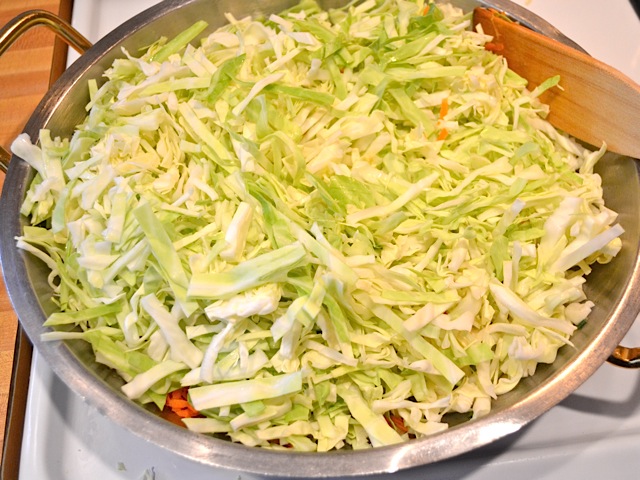 Add the shredded cabbage and continue to stir and cook, allowing the cabbage to wilt. It might help to increase the heat to medium-high at this point. 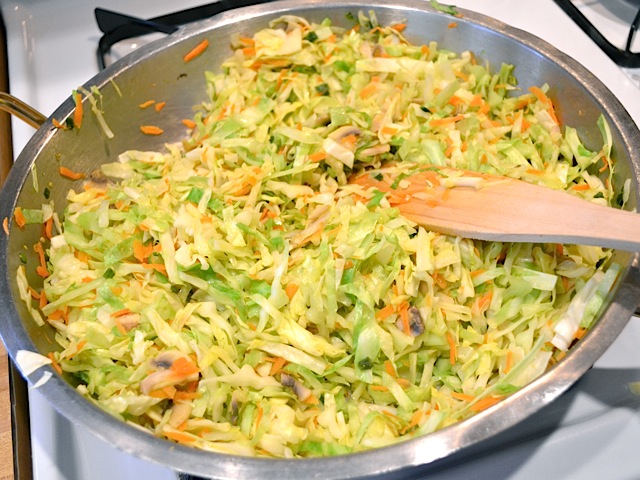 Continue cooking until the cabbage is reduced in volume by about half (10 minutes or so). 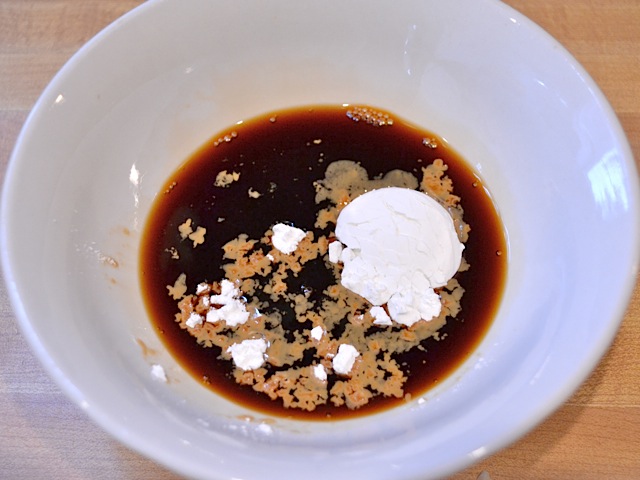 At this point, dissolve the corn starch in the soy sauce. Add this mixture to the skillet and stir to coat the cabbage. 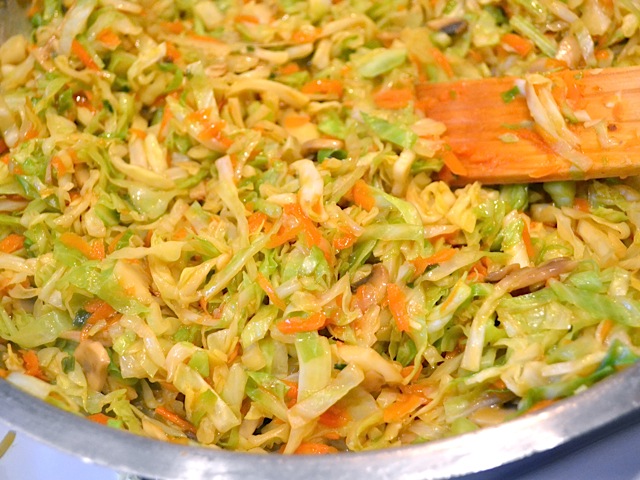 The heat from the skillet will thicken the corn starch/soy mixture and create a soy sauce glaze. Turn the heat off once it has thickened (this usually happens immediately). 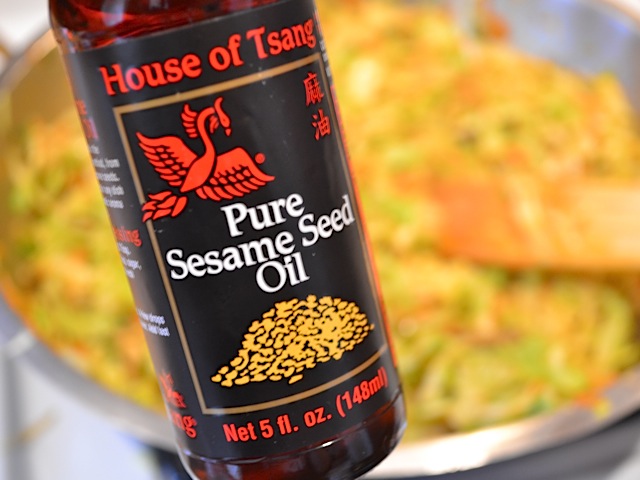 Stir in the sesame oil and give the mixture a taste. Adjust seasoning as you see fit. …a little sriracha wouldn’t hurt, if you ask me. But, that’s just me. 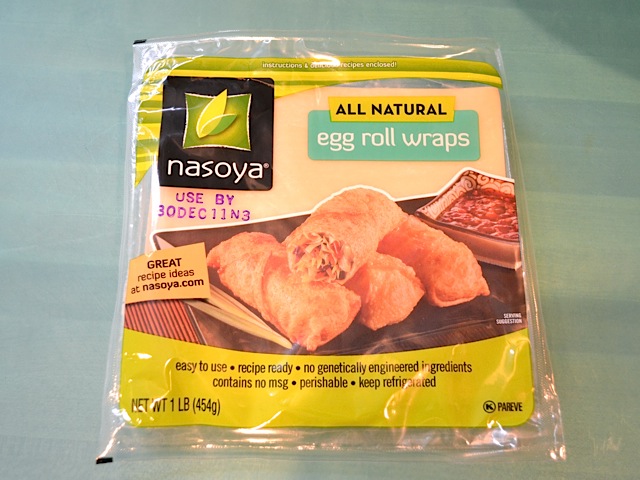 These are the egg roll wrappers that I used. They can usually be found in the refrigerated section of the produce department, near the tofu and other meat substitutes. This package had 20 wrappers in it which was perfect for the amount of filling I had. 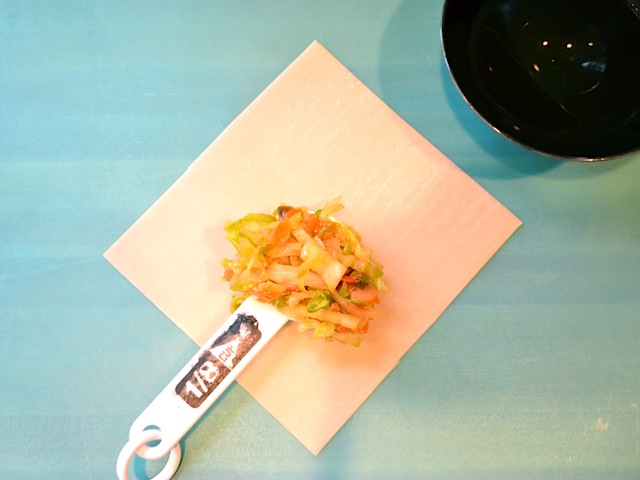 Start to fill and roll the egg rolls. Get a small bowl of water because that will be your “glue.” Lay one wrapper out at a time and place some of the filling just off center, toward one of the corners. I used an 1/8th cup scoop but filled it to overflowing… so it was probably more like 1/4 cup per roll. But you’ll have to play with it. 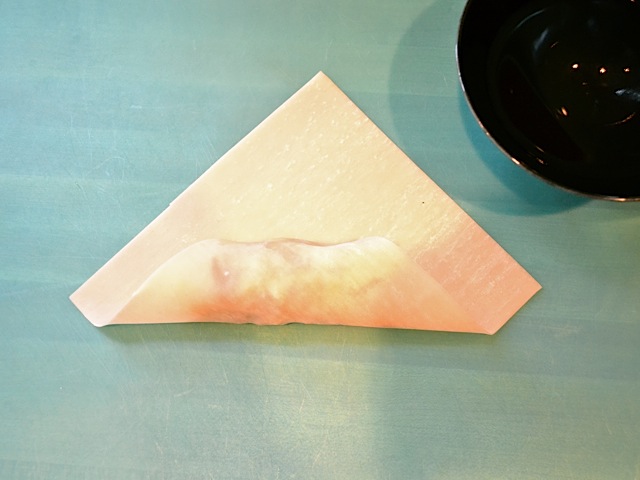 Fold the bottom corner up and over the filling and make it snug. 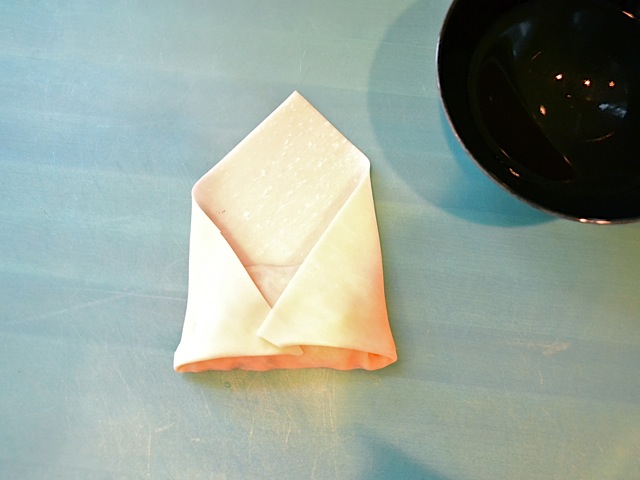 Make sure the filling isn’t squeezing out the sides and then fold each side in. This is where the water comes in. Put a small dab of water under each corner to glue them into place. 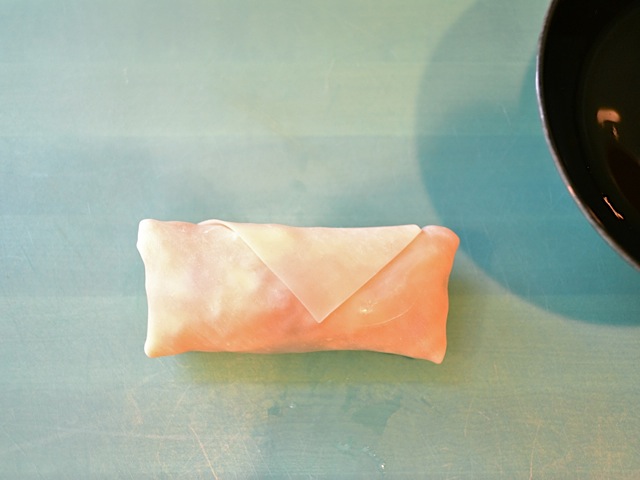 And then roll it the rest of the way up. Place another little dab of water under the top corner of the square. 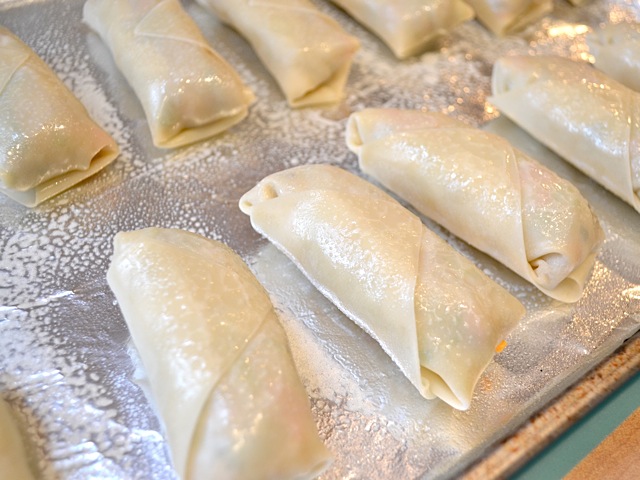 Preheat the oven to 425 while you’re rolling so that it’s ready to go when you’re done. Place the egg rolls on a baking sheet and coat with non-stick spray. Roll them over and spray the other side. If you don’t like non-stick spray, you can brush them with vegetable oil. 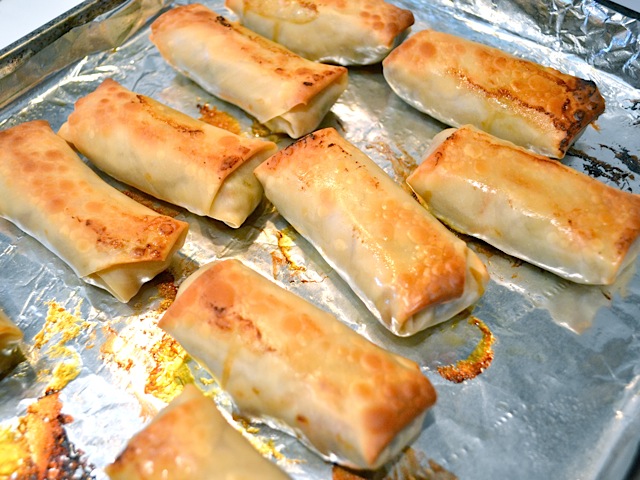 Bake in the preheated for about 20 minutes or until they are golden brown and crispy. Turn the egg rolls over at least once during the baking time to prevent the bottoms from getting soggy. Mine still seeped a little liquid but they were pretty crispy overall. Keep an eye on the egg rolls because every other “baked egg roll” recipe I’ve seen suggested 10 minutes but mine took somewhere between 20-25 minutes. Every oven is different! 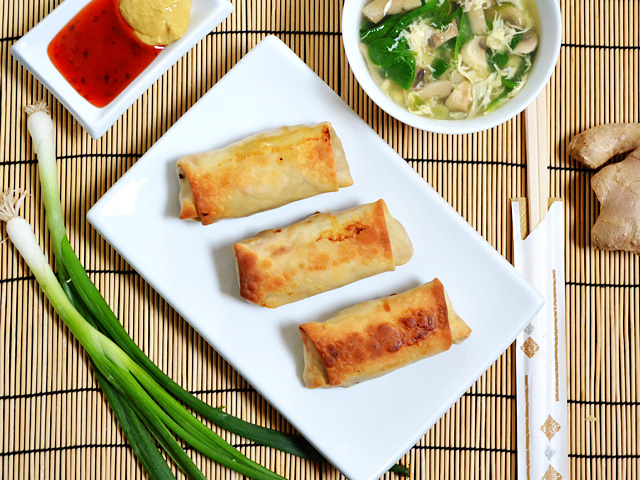 I’ve been gobbling up my egg rolls with Chinese hot mustard and a little sweet and sour sauce… you can also try teriyaki sauce, duck sauce, sriracha, sweet chili sauce, or just plain! 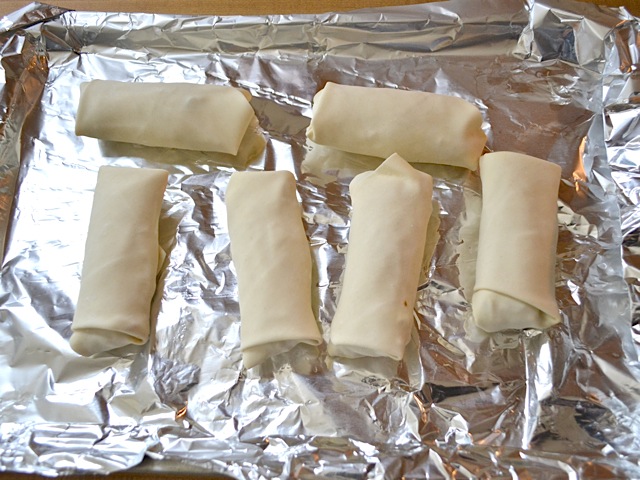 So, when I made my egg rolls, I placed a few on a baking sheet and popped them in the freezer. Once they freeze through (a couple of hours) you can then transfer them to an air-tight container like a freezer bag and they won’t stick to eachother. 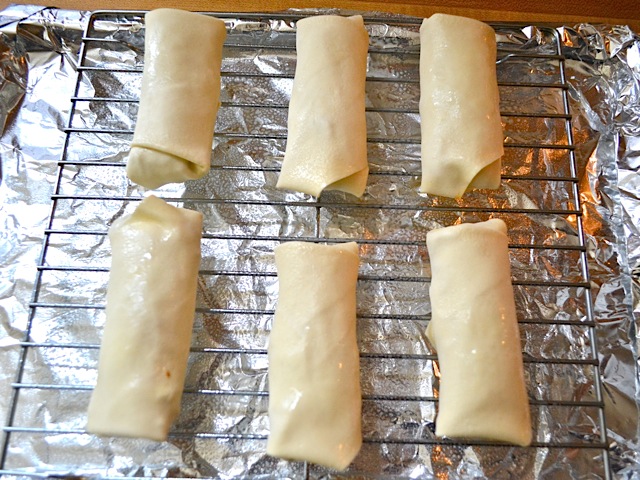 So, the next day, I preheated the oven, took the egg rolls out of the freezer, and coated them with non-stick spray. I decided to elevate them off of the baking sheet with a cooling rack to try to keep the bottoms from getting soggy… but I forgot to roll them over during the baking process, so my efforts went wasted. 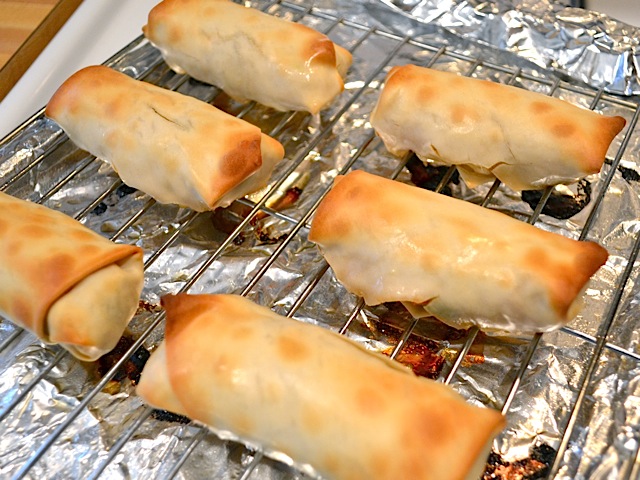 I baked the egg rolls at 400 degrees rather than 425 so that they would have time to heat up on the inside before the outside browned. As it turns out, freezing them reduces the elasticity in the wrapper so they kind of cracked open in some spots… but damned if they weren’t still delicious! I’ll still be freezing some next time!