There’s nothing quite like a hot soothing soup when you’re feeling under the weather. This fast and easy homemade egg drop soup comes together in just a few minutes and has a ginger infused broth that is extra comforting to an achy head and body. And because this soup is so incredibly simple, it lends itself well to several variations, allowing you to customize the soup based on what you have on hand. So skip the take out and make a giant pot of soup for what you’d probably spend on one serving of deliver. ;) 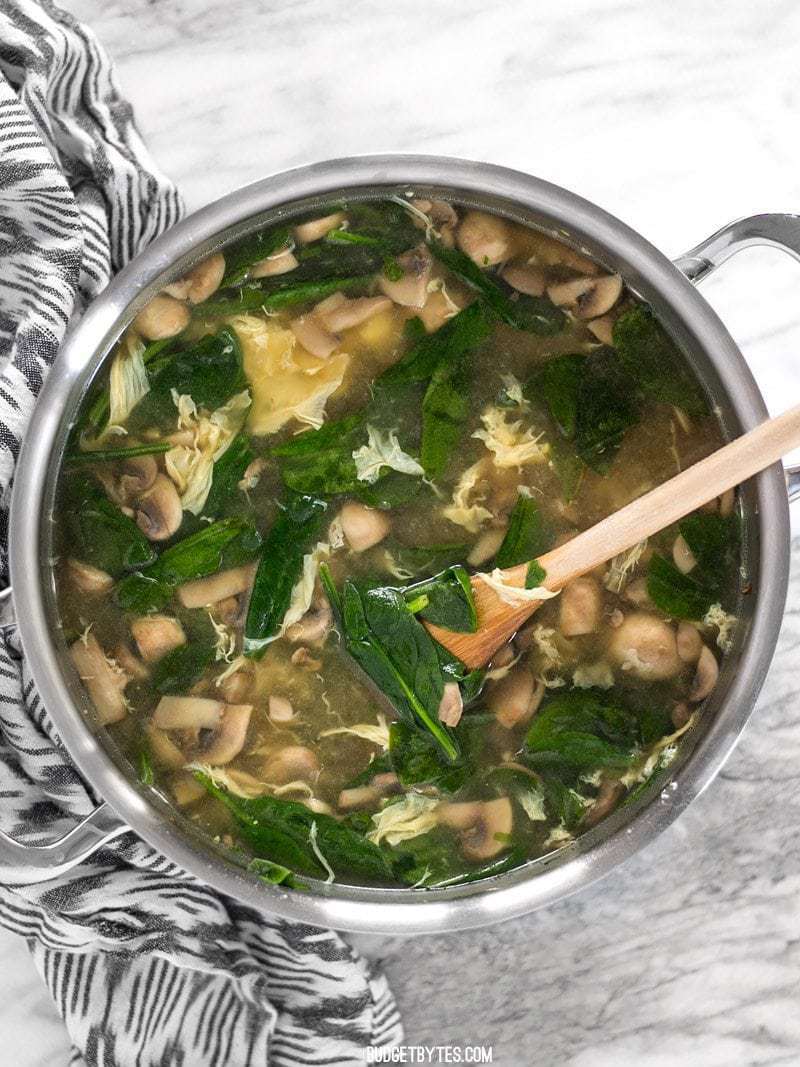 How Do You Thicken Egg Drop Soup?

You may have noticed that classic egg drop soup has a slight thickness to it, and the broth isn’t as thin as a traditional chicken broth. The secret to this thickness is a cornstarch slurry and the reason for this thickness is to create beautiful, delicate threads of cooked egg throughout the soup. The viscosity of the broth helps prevent the egg from dissipating into tiny bits when it’s added to the hot soup.

I added mushrooms and spinach to my egg drop soup to try to sneak in some veggies, but if you just want a plain, brothy egg drop soup, you can leave them out. Or, if you want something a little heartier, you could even add some noodles. Want to make a vegetarian egg drop soup? Simply sub vegetable broth for the chicken broth and you’re good to go.

4.91 from 21 votes
This fast and easy homemade egg drop soup is warm and soothing on cold days or when you're feeling under the weather. Comes together in under 30 minutes! 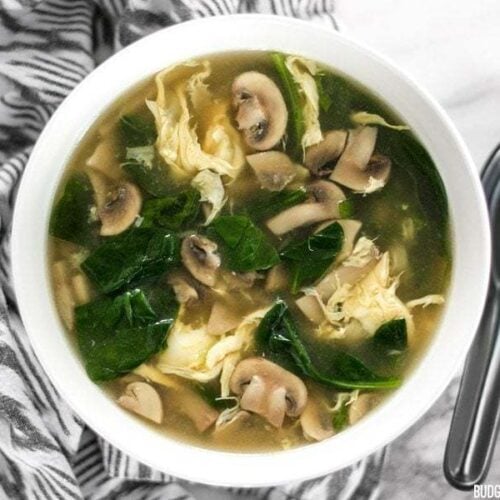 The speed at which the soup is swirling and how quickly you pour in the eggs will determine the size of the egg “threads.” If you want larger or thicker egg threads, don’t stir the soup as fast and pour the egg in faster. Do NOT pour the eggs into a rapidly boiling soup or else it will break apart into very small pieces and you will not have egg threads. *I use Better Than Bouillon to make my broth. 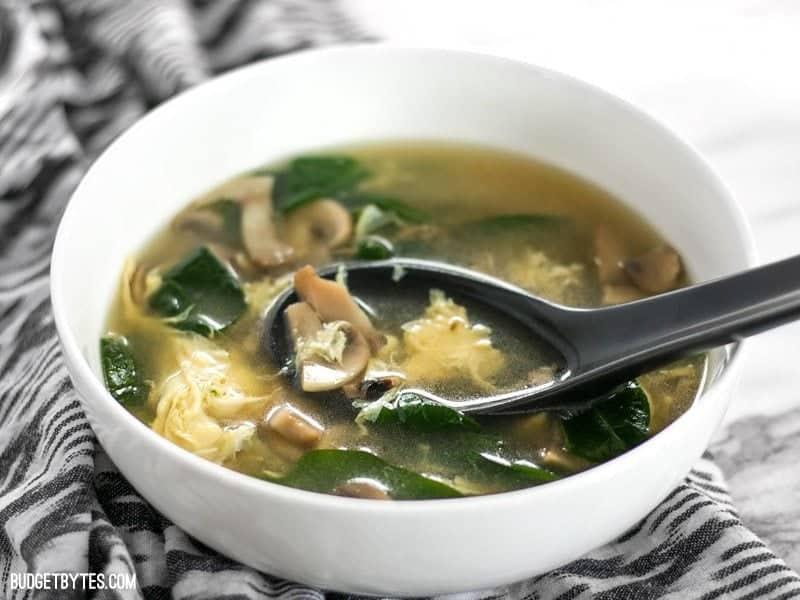 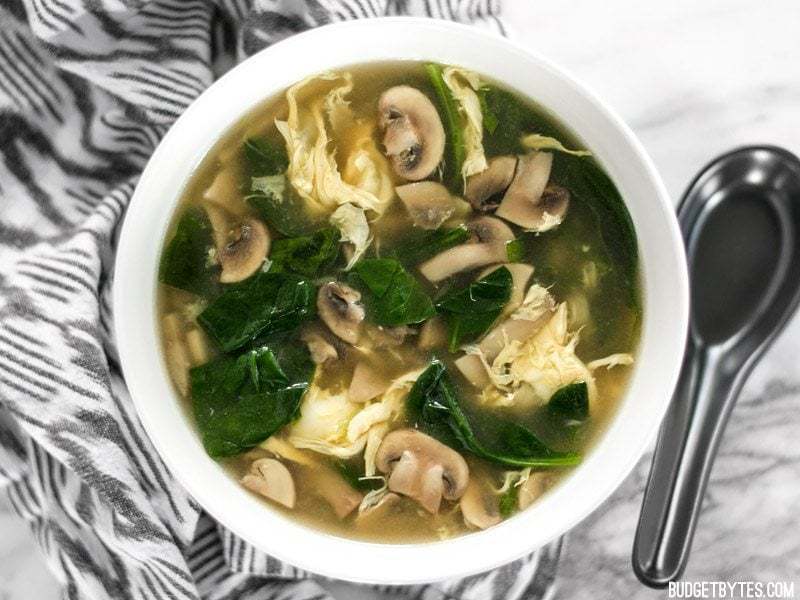 Perfect for a cold rainy day!

How to Make Egg Drop Soup – Step By Step Photos 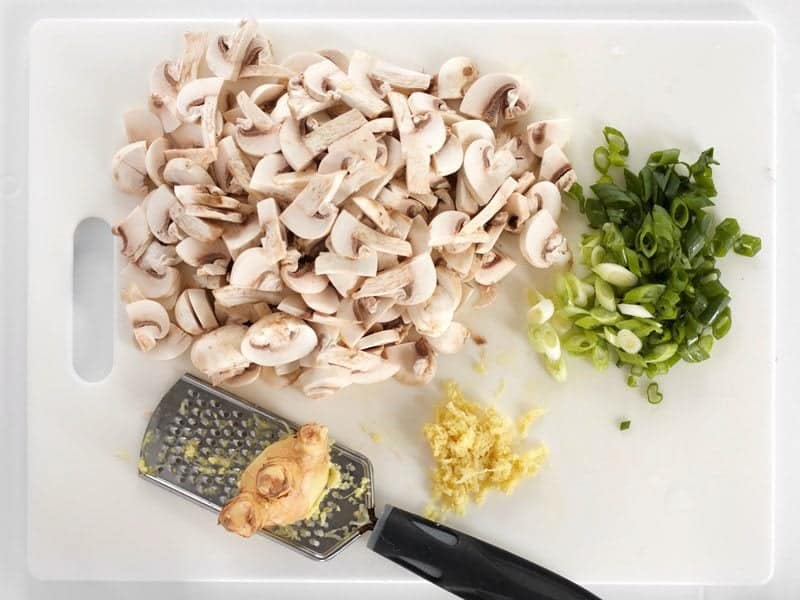 Begin by washing and slicing 8oz. mushrooms, slicing three green onions, and peeling and grating about 1 Tbsp fresh ginger. The original version of this recipe only used 4oz. mushrooms, so you can cut it in half if needed. 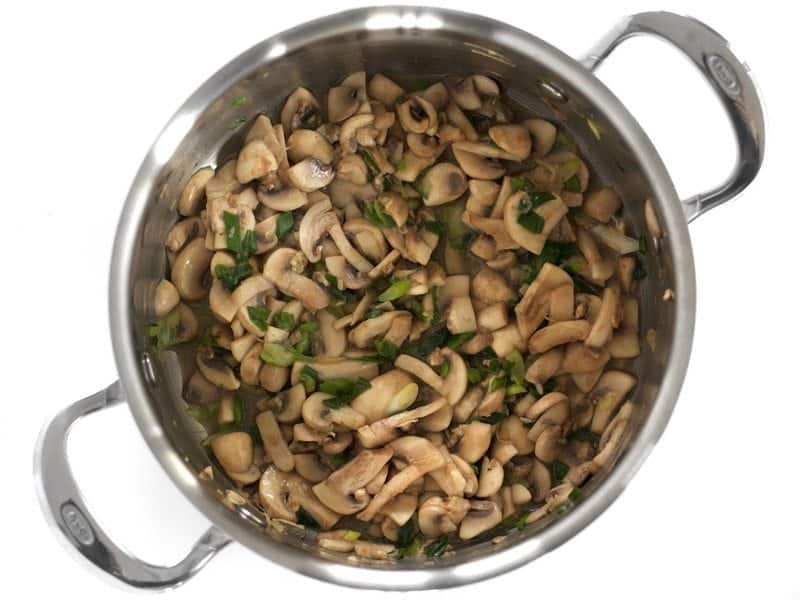 Add the mushrooms, green onions, and ginger to a large soup pot along with 1 Tbsp cooking oil. Sauté over medium heat for a few minutes, or just until the mushrooms begin to soften. 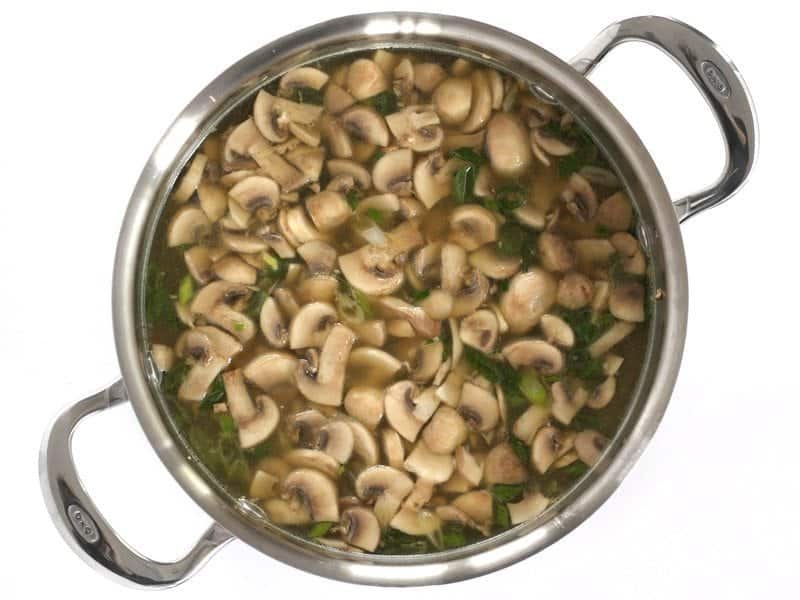 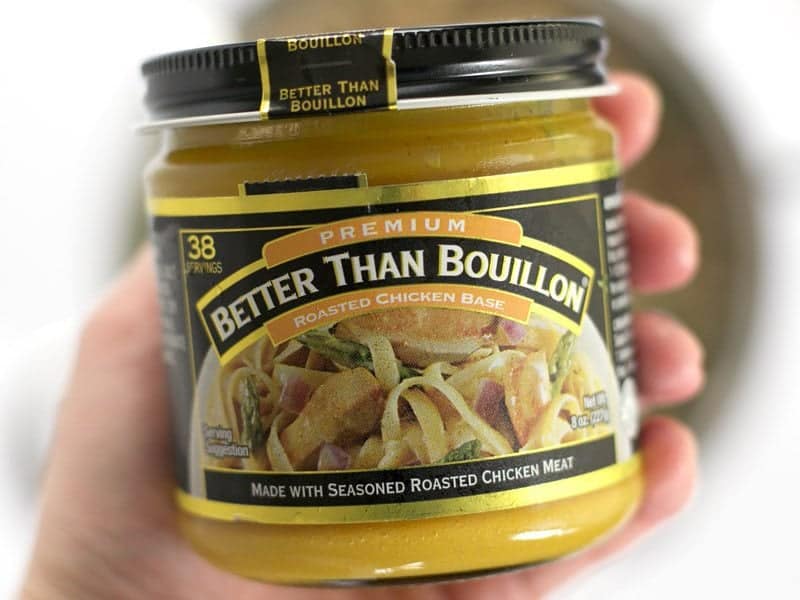 I use Better Than Bouillon to make my broth. It’s super convenient, takes very little storage, and you can mix up any amount needed (1 tsp BTB + 1 cup water = 1 cup broth). 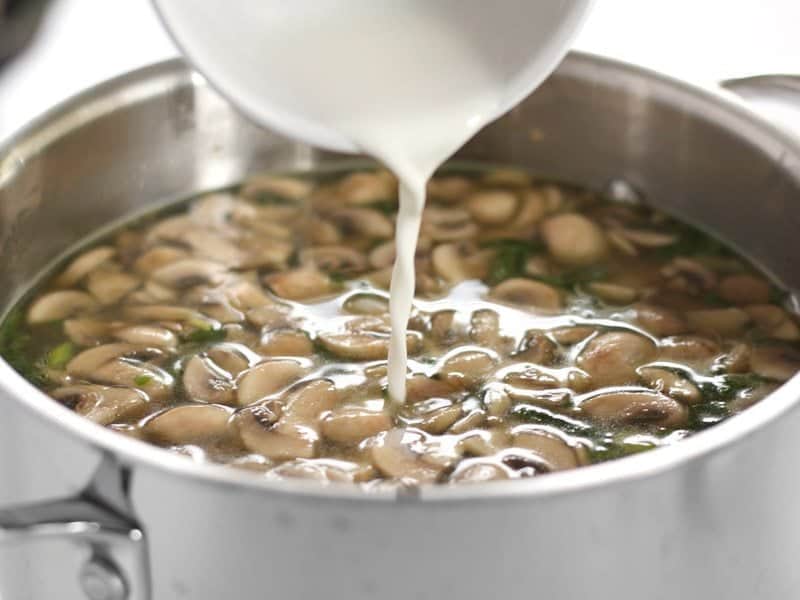 In a small bowl, stir together 1 Tbsp cornstarch and 1 Tbsp water. Stir the cornstarch slurry into the soup pot. Bring the soup up to a boil. The small amount of cornstarch helps thicken the soup ever so slightly, giving it more body and helping the egg stay in nice threads rather than just mixing into the broth. It’s a very small, almost undetectable amount of thickening, but it’s important. 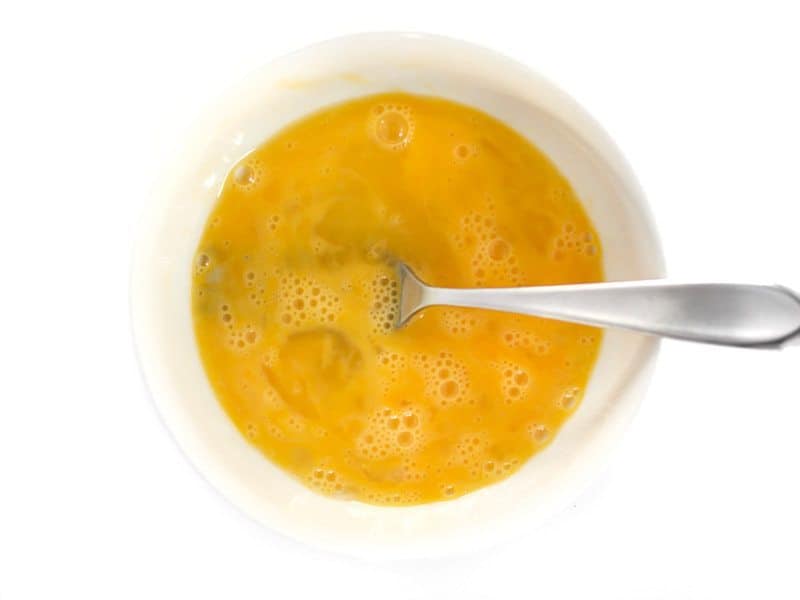 While waiting for the soup to come up to a boil, whisk two eggs in a bowl. 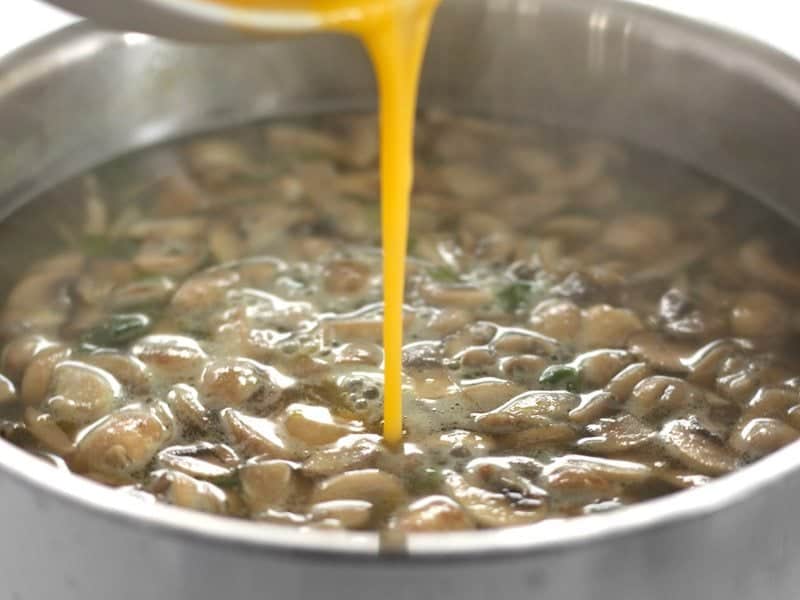 Once the soup reaches a boil, turn the heat down to low and wait for it to stop boiling. If you like your egg drop soup to have a million small pieces of egg, go ahead and add it while it’s boiling. If you like thin, pretty threads of egg, you must wait for it to stop boiling. Then, take a large spoon and start swirling the soup in one direction. As the soup swirls, slowly drizzle in the egg in a thin stream, then DON’T TOUCH IT for at least a minute, maybe two, to give the egg threads a moment to set. 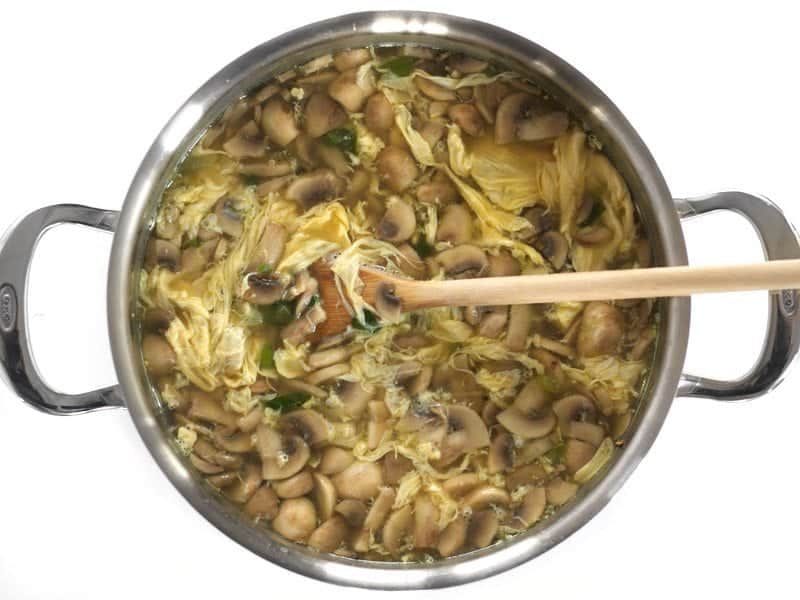 And then you can stir the pot to bring the egg threads up to the surface and see their beauty. I was trying to take photos with one hand while pouring in the egg with the other, so some of my threads are a bit thick, but they’re pretty none the less. 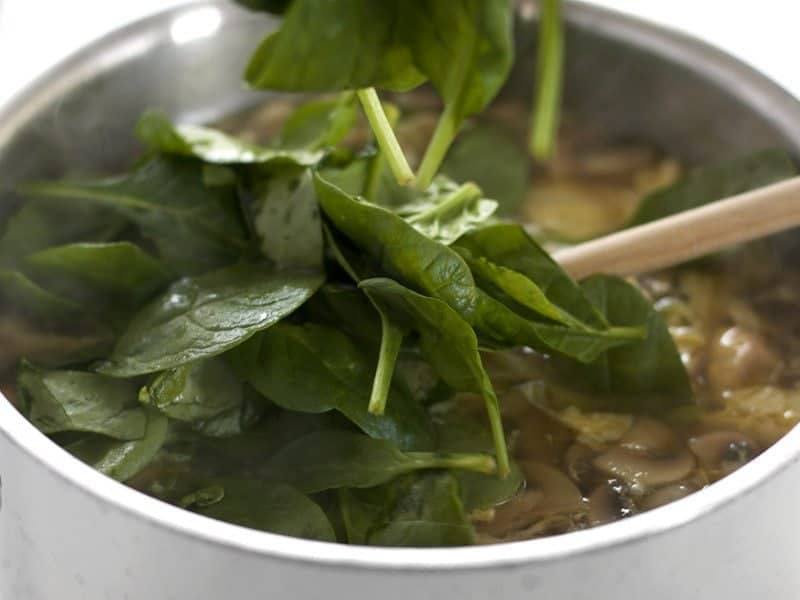 Finally, add in a couple handfuls of fresh baby spinach and stir until they are wilted into the broth. 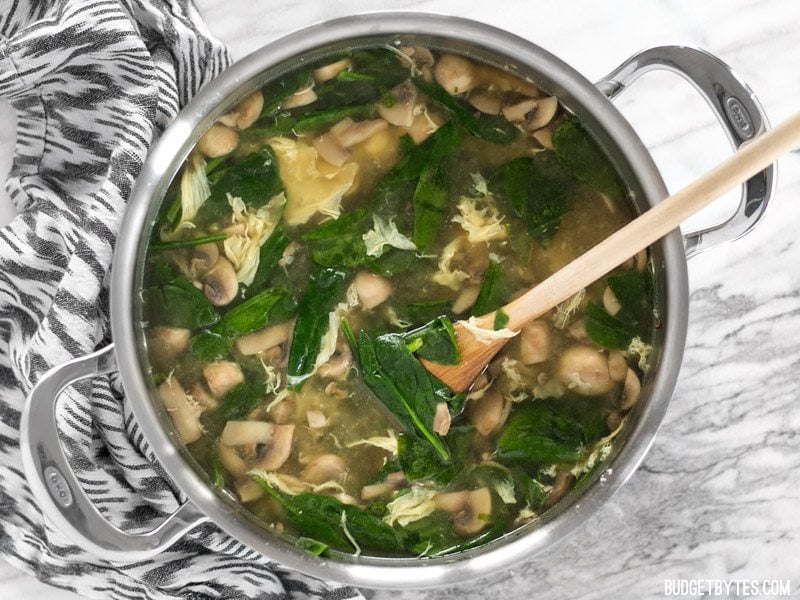 And that’s that! Seriously easy Egg Drop Soup! It’s always a good idea to taste and adjust the salt if needed. To keep with the flavor profile, I’d add soy sauce if you need more salt, rather than adding plain salt. 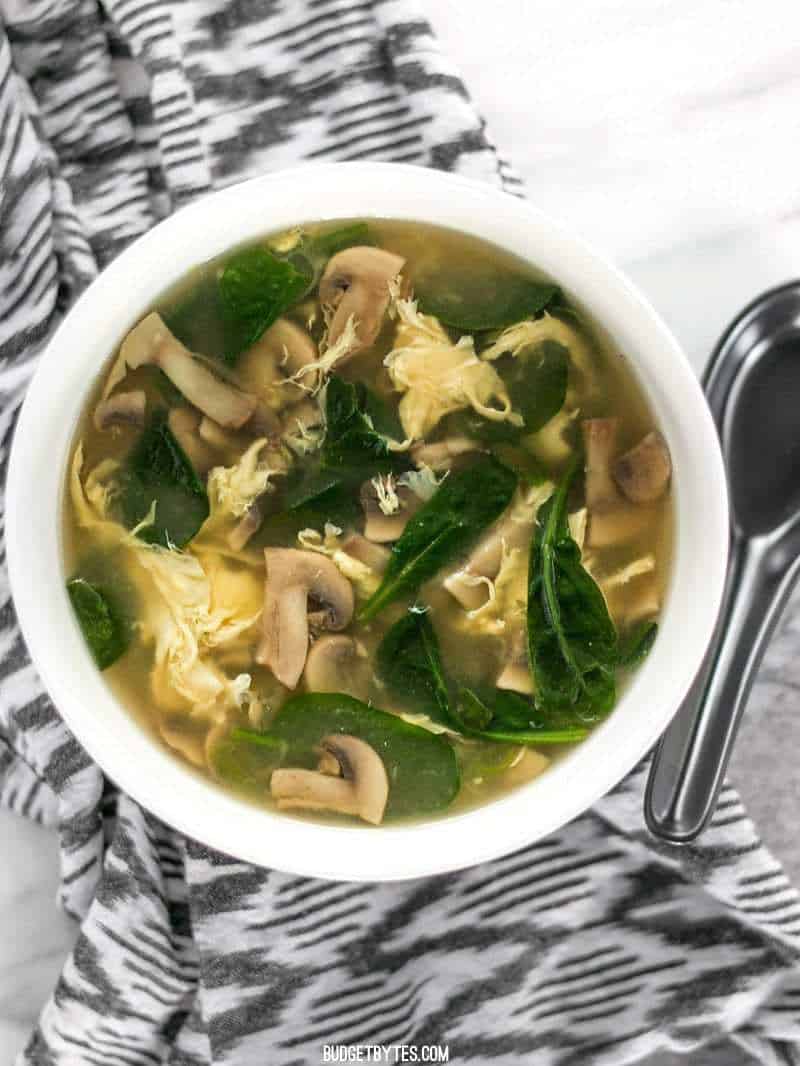 That ginger in the broth makes it SOOO soothing!