Last week was one of the most chaotic/stressful/exciting/exhausting weeks of my life and it was also the final week of my SNAP challenge. Going into the week I really wasn’t sure I’d be able to manage grocery shopping and cooking while trying to execute my move into the new house. I wanted so badly to say, “Screw it!” and eat take out all week so that I didn’t have to deal with shopping, cooking, and dirty dishes.

Well, I got my butt to the store and bought groceries, cooked three recipes, and forged ahead. Even after all that effort, I still made several mistakes and missteps throughout the week. I’m bummed that I broke down and ate food outside of my SNAP budget, but even these failures were insightful. They pointed my brain towards more “what if” scenarios that I wouldn’t have thought of otherwise. So, even though I didn’t totally stick to plan in this final week, hopefully you’ll still get something out of the experience like I did.

What Did I Buy? 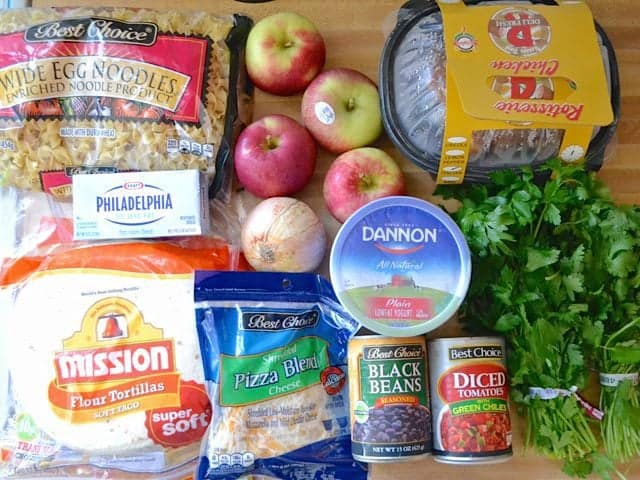 Anyway, I bought some items to make enchiladas with the chicken (tortillas, diced tomatoes, cream cheese, beans), and I was lucky enough to get a BOGO deal on the tortillas (two for the price of one). Extra tortillas were used to make quick cheese quesadillas for snacks or light meals (sometimes with egg). I also picked up some cilantro and a lime to make cilantro lime rice to serve with the enchiladas. I used the other half of the chicken to make chicken noodle soup, so I picked up onion, celery, parsley, and noodles. The soup also allowed me to use up leftover carrots from last week. I bought a single onion rather than the 3lb. bag I usually get because I thought it would be easier with moving, but it made the onion twice as expensive. Ouch. 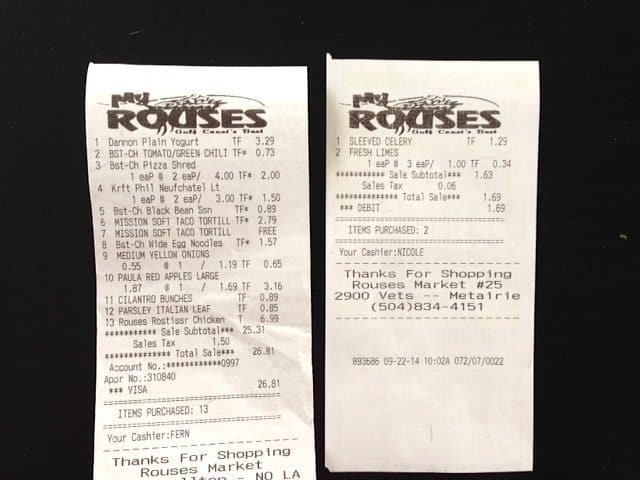 (Despite having a list with me, I still forgot the celery and lime, so I had to go back to the store a second time. Grrr.)

Although I wasn’t that crazy about the apples as my fruit choice last week, I walked into the store this week there were some amazing fresh fall apples. You know, the kind that have that incredible autumn aroma and are all juicy and crisp? So, I had to get some of those. They were WAY better than last week and only $1.69/lb., so that was good. Shredded cheese was still on sale, so I picked up a bag of that, too, because having a little cheese in my life goes a long way towards happiness (sad, but true).

What did I Make? 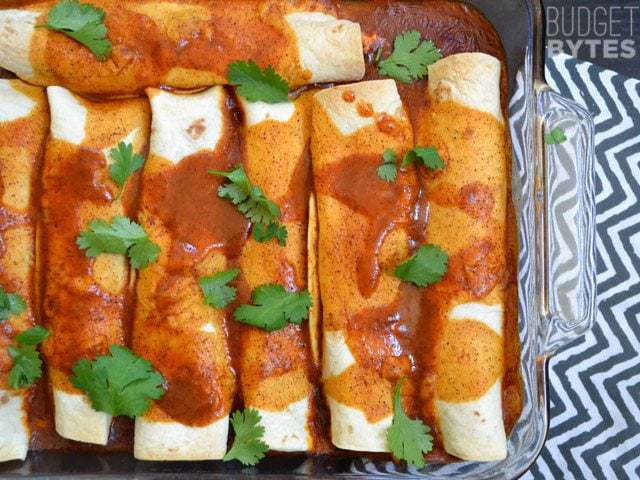 I made these amazing Creamy Chicken and Black Bean Enchiladas as my main meal. They enchiladas ended up being pretty large, so I was happily filled up with one enchilada plus a side of rice. Each enchilada came to about $1.08. 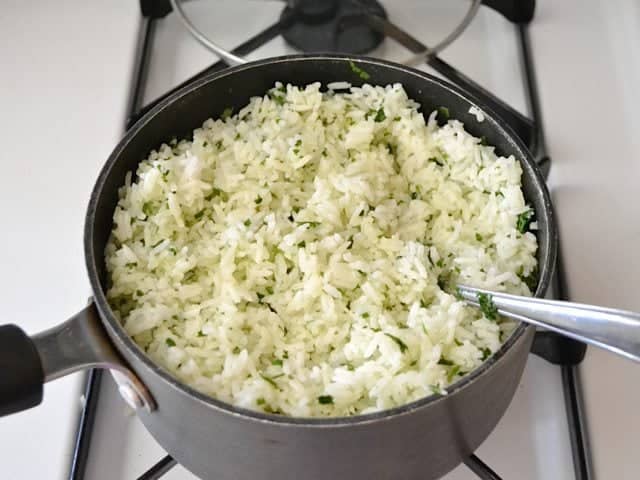 I made a quick cilantro lime rice to go with the enchiladas. To make this rice I just cooked two cups of white rice with two cloves minced garlic, 3/4 tsp salt, and 3.5 cups water. Then in a small blender I puréed a half bunch of cilantro with 2 Tbsp vegetable oil, fresh lime juice, and some of the lime zest (I didn’t really measure, just winged it). Once the rice was cooked and fluffed, I folded in the cilantro lime purée. It made about 7 cups (fluffed, not packed) and came to about $0.27 per cup. 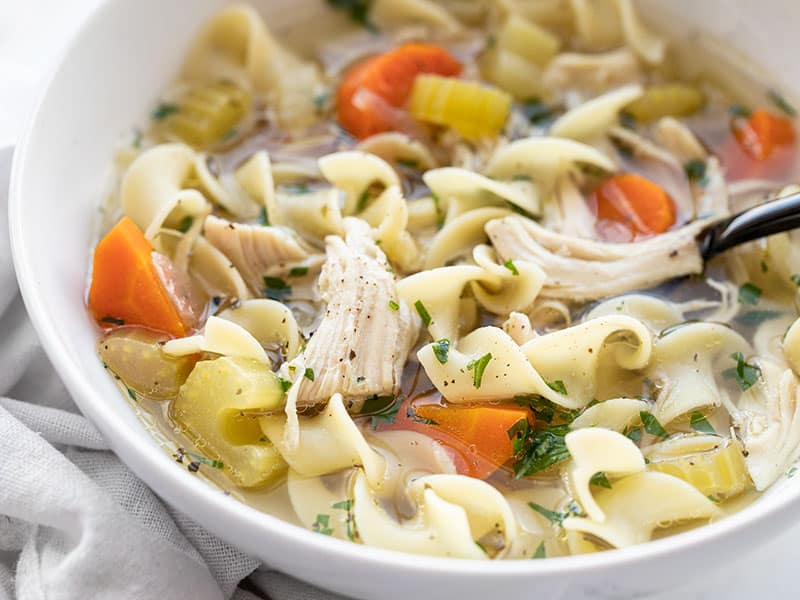 Lastly, I used the second half of the rotisserie chicken to make a batch of homemade chicken noodle soup. I made my own slow cooker chicken broth, then used my basic Homemade Chicken Noodle Soup recipe (minus the garlic) to make the final soup. The total cost of the soup this time around (including items used to make the broth) was $6.90 and it made about 12 cups, coming to $0.58 per cup. I usually ate about 1.5 cups per sitting.

With such a hectic week, my diet was kind of all over the place. Eating was sporadic and when I did eat, I wanted junk. I can’t say it enough—stress and willpower are not friends.

Reflection: I barely ate anything today because I was filled with stress and anxiety. I nibbled on a little enchilada filling while cooking the enchiladas, so that probably helped fill me up, too, but I have no idea how to calculate the cost of those miscellaneous spoonfuls or the few pieces of crispy skin that I sneaked off the chicken while pulling the meat.

Reflection: I only had about two hours of sleep the night before (thx, no thx, stress!), so I broke down and bought a coffee at work. I was really bummed to find that it was about 50 cents more than the last time and broke down and bought coffee, but apparently it was a “weekend special” price before. I was surprised at how upset I was over 50 cents, but that’s a lot when you have so little. I managed to make my chicken noodle soup after work, despite the fact that I had to finish packing my apartment before morning. I was SO tired.

Reflection: MOVING DAY! In my sleepy stupor last night I forgot to leave a dish and a fork/spoon unpacked to eat my breakfast with. I really wanted to go pick up breakfast somewhere, but I just melted some cheese in a tortilla and ate half an apple instead (no dishes or utensils required!). Crisis averted. Later in the day, when I was making one of my 200 trips between my apartment and house, I realized I was deathly dehydrated and needed a beverage, like NOW. I broke down, stopped at the store, and picked up a Powerade (interesting: the 32 oz. was half the price of the 20 oz. bottle). At the register, I caved AGAIN and grabbed a bag of chips. *sigh* Can you buy chips and a drink on SNAP? Probably not. What would I have done if I didn’t have $1.95 to splurge on that? Drive all the way back to get some water so I didn’t faint? 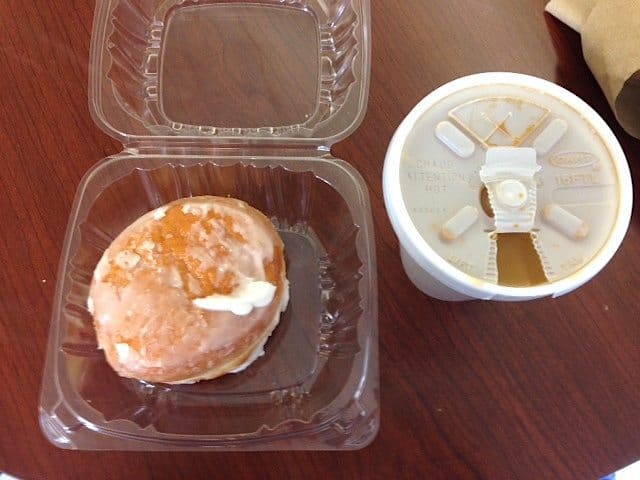 Reflection: Pain. My whole body was in pain from moving and having next to no sleep. I broke out of the challenge again today with a coffee and donut from the cafeteria at work. Obviously I wouldn’t have been able to buy this with SNAP benefits, but I swear I felt like I wasn’t going to make it through the day without it. That one little coffee and jelly donut totally changed everything. It made me realize just how much food impacts our mood and ability to function. I can only imagine that working 2 (or more?) jobs and consistently not getting enough food would probably lead to a very poor disposition very quickly. Yet there are still some people that manage to stay positive and optimistic. I don’t know how they do it. 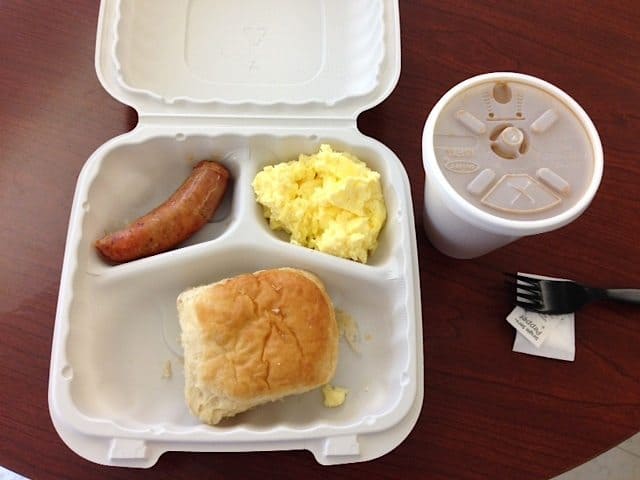 Reflection: I woke up optimistic. The first few days of this week were rough, but I wanted to get back on track. I ate a good breakfast, packed my lunch, then accidentally LEFT MY LUNCH AT HOME. ARG! A little panic set in when I realized I left it sitting on the kitchen counter, so I had to improvise. Honestly, if I only had SNAP benefits, I probably would have just gone hungry until I got home from work. I didn’t have the strength to do that, so I paid “out of pocket” for a meal at work. Lunch from the cafeteria is easily $5-$7, so I decided to minimize the damage by getting breakfast instead. Eggs, sausage, biscuit, AND coffee only cost me $3.34 and that kept me full till I got home later in the afternoon. But, where would that money actually come from if this was real? Would that be half of my laundry money for the week? Would that mean putting off filling up my gas tank for a day or two and having to ask a friend for a ride to work? It would, without a doubt, mean sacrificing somewhere else, so maybe I would rather just go hungry until I got home. Even small missteps can have big consequences when you don’t have a lot to work with.

Also, I was sad that I had to throw away a whole serving of enchilada and rice because it sat on my kitchen counter all day. (Oh, and funny story… I accidentally sprinkled sugar all over my eggs instead of salt. You bet I ate them anyway!)

Reflection: The week is almost over and the stress is finally starting to float away. Now that my mind is clearing, the hunger is coming back. I’m dying to go out to eat and really indulge. I want vegetables. Tons of fresh vegetables. I don’t think this week’s plan had enough vegetables. Looking forward to the end of the challenge makes me realize that this might be a LOT easier just because I know it’s not forever. If there was no end in sight, I’m sure my outlook would be much more grim.

Reflection: Day seven of the week is always hardest because the monotony of the meals is at its peak. In the end, though, if you’re hungry, you’re just happy to have food. So, I ate my last enchilada and rice happily.

My big take away lesson this week was how much those little impulse food buys can change your mood or the course of a day. On the days that I went outside of the rules of the challenge, those little perks completely changed my mood and energy level. I think we take those things for granted. Even if you don’t try the whole SNAP Challenge, I think it’s an interesting experience to not allow yourself any type of snack or impulse food buy for a day or week (three straight meals and nothing between). You really get a sense of how food impacts your daily life on subconscious levels.

Read through my experience from beginning to end: