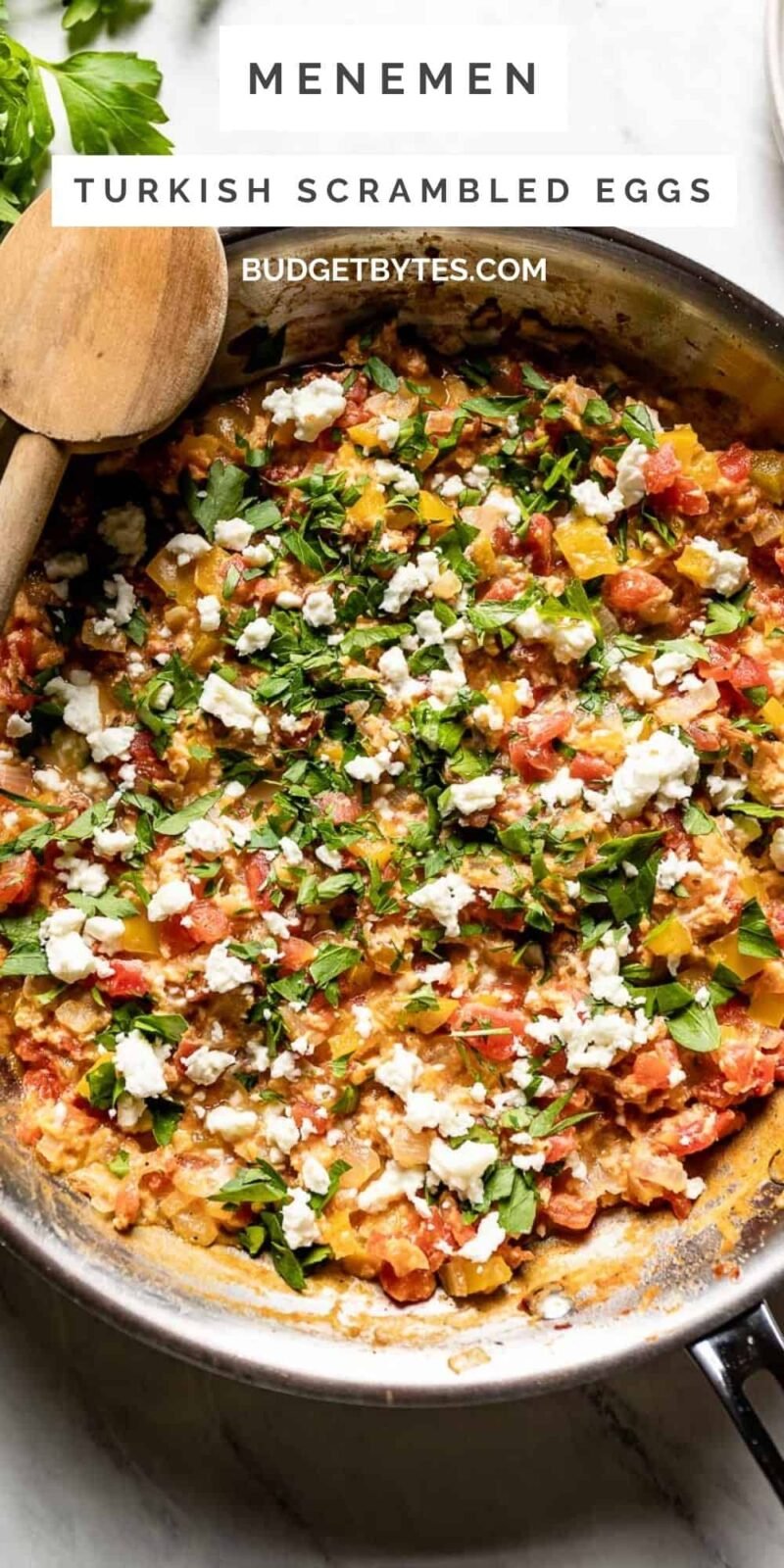 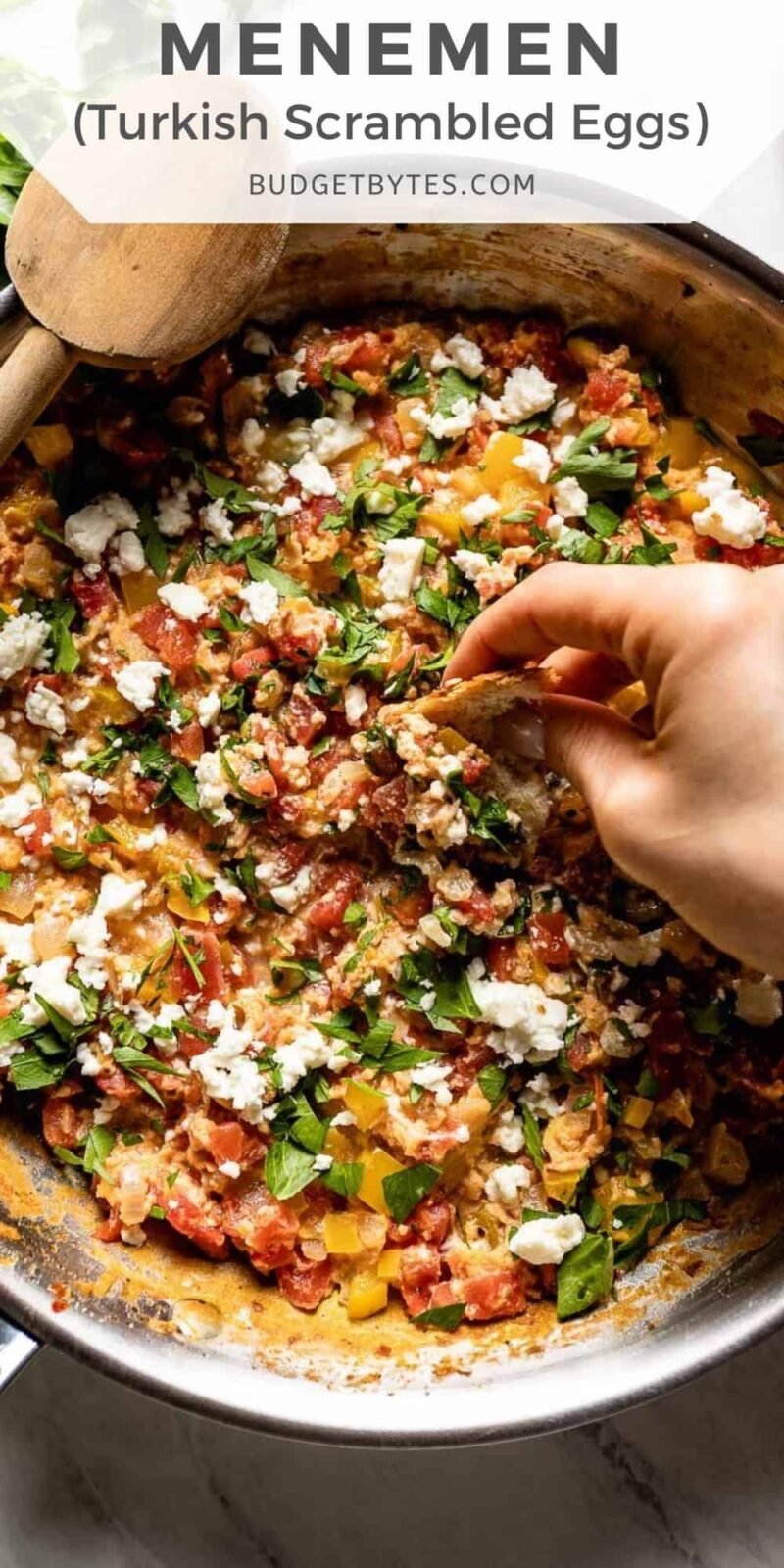 Ready to up your breakfast game? Try this traditional Turkish scrambled eggs recipe, also known as Menemen. This one-pan vegetarian egg dish is healthy, filling, easily customizable, and ready in less than 30 minutes from start to finish.

Menemen is a traditional Turkish breakfast recipe made by cooking eggs with onions, peppers, and tomatoes with a subtle hint of spice. It gets its name from a Turkish town called Menemen, located in Izmir.

What to Serve with Menemen?

Menemen is traditionally served in the skillet that it is cooked in while it is still hot and bubbly. It is usually served with crusty bread on the side, which is then dipped into the soft scrambled eggs and vegetables for a satisfying bite.

With that being said, if you want to serve it as Turks do then I would recommend a few must-haves on the side:

The best part of this Turkish soft scramble recipe is that you can easily change it up with whatever you have on hand. Here are a few ideas:

What else can I add?

You can follow the recipe as written or take it up a notch with a few additions to it.

4.67 from 3 votes
Menemen, or Turkish scrambled eggs, is an easy, healthy, and customizable dish that can be ready in less than 30 minutes!
Author: Aysegul Sanford 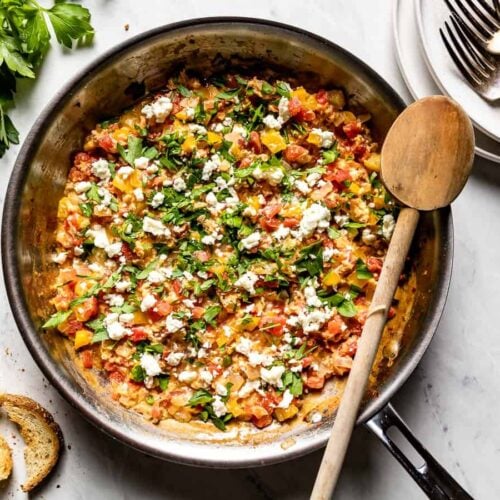 How to Make Menemen – Step by Step Photos

Begin by dicing one bell pepper (any color) and one small onion.

Heat 2 Tbsp of olive oil in a skillet over medium heat. Once hot, add the diced onion and bell pepper, along with ½ tsp dried oregano and ¼ tsp red pepper flakes or Aleppo pepper. Sauté until the vegetables have softened.

Add one 15oz. can of diced tomatoes (with the juices), 1 tsp salt, and ¼ tsp black pepper. Stir to combine.

Continue to sauté for about 2-3 minutes more, or until everything is heated through well.

Lightly beat four large eggs, then pour them into the skillet.

Cook the eggs, stirring frequently, until they are just barely set yet still soft (about 2-3 minutes).

Top with crumbled feta and more black pepper, if desired.

Serve with crusty bread for dipping!

Aysegul SanfordAysegul Sanford, aka Ice, is the author behind foolproofliving.com, where she shares healthy tried and true recipes that are made without the use of refined sugars. She grew up in Turkey but traveled throughout the world always on a mission to further broaden her knowledge of cooking and flavors. Her favorite toy is her camera and she is almost always in the kitchen taking pictures of delicious food.More About Aysegul