I’m pretty much a pizza addict. I want it all the time. Thin pizza, thick pizza, frozen pizza, artisan pizza, I want it all. I love exploring the pizza frontier, which is why I decided to test out this No Knead Pan Pizza technique. I’ve seen the technique quite a few places around the web, but this post from Serious Eats has a really excellent tutorial with photos.

The idea is simple. Make a basic batch of no knead bread dough (I used my awesome Focaccia Roll dough), plop it into a well oiled cast iron skillet, top it with your favorite goodies, then bake at a really high heat. The outer crust gets nice and crispy from all the oil, the inside dough is thick and bubbly, and the whole thing is just divine. Plus, as always, it’s super cheap! Hooray pizza night!

As mentioned before, I used the Focaccia Roll dough for my no knead pan pizza (halved to fit my skillet, plus added a little olive oil), I had some left over sauce and cheese in my fridge, and I stopped by the salad bar at the grocery store to get a handful of vegetables for toppings (my salad bar pizza method). This no knead pan pizza is great for using up leftovers, so keep this trick tucked up your sleeve. You can use leftover BBQ sauce as a base instead of red sauce, use up extra beans, cheese, veggies, or meat, whatever you have on hand. Just keep in mind that the dough needs at least 12 hours to do it’s thing, so you have to plan it out at least one day ahead. 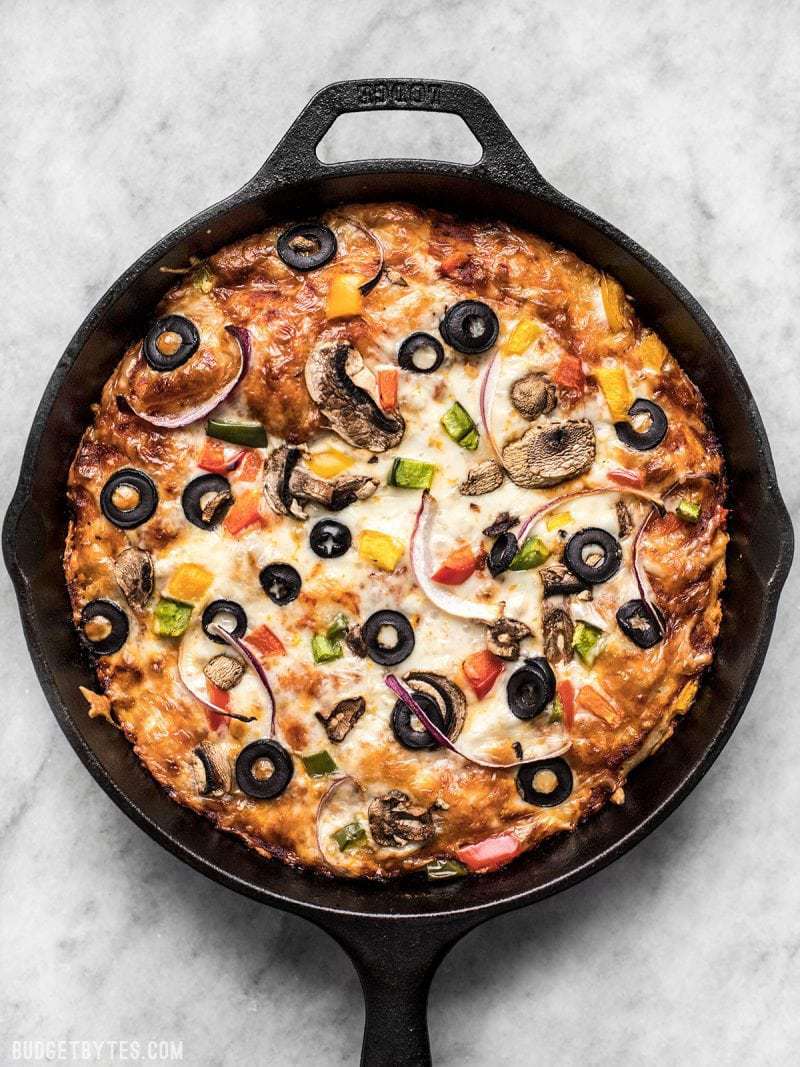 4.91 from 32 votes
A simple overnight no knead dough makes a perfectly crispy yet thick pan pizza. Deep dish has never been easier. 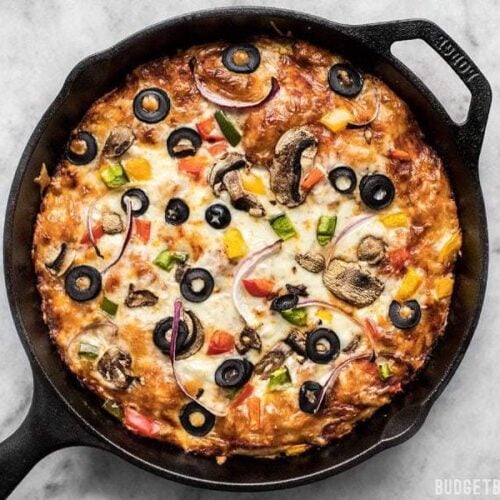 I used a 10 inch cast iron skillet, although this recipe would easily work with a 12 inch skillet as well. 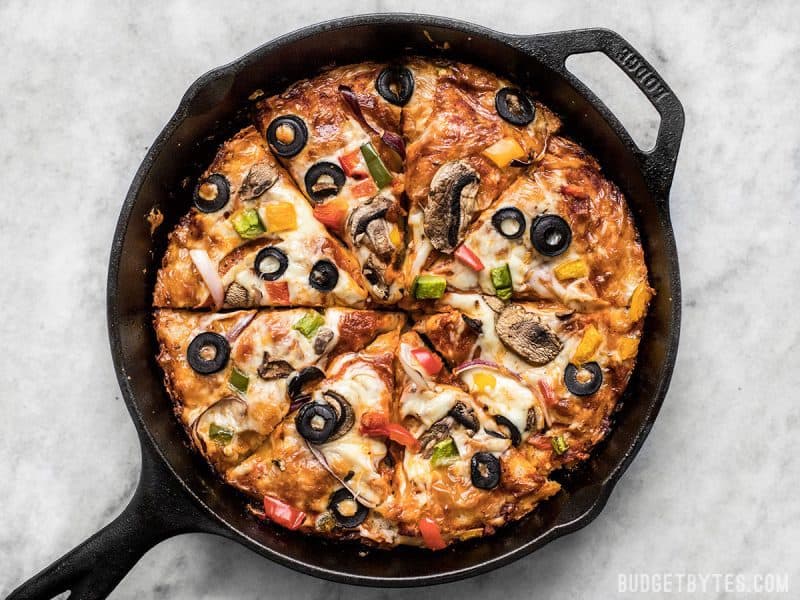 How to Make Pan Pizza – Step by Step Photos 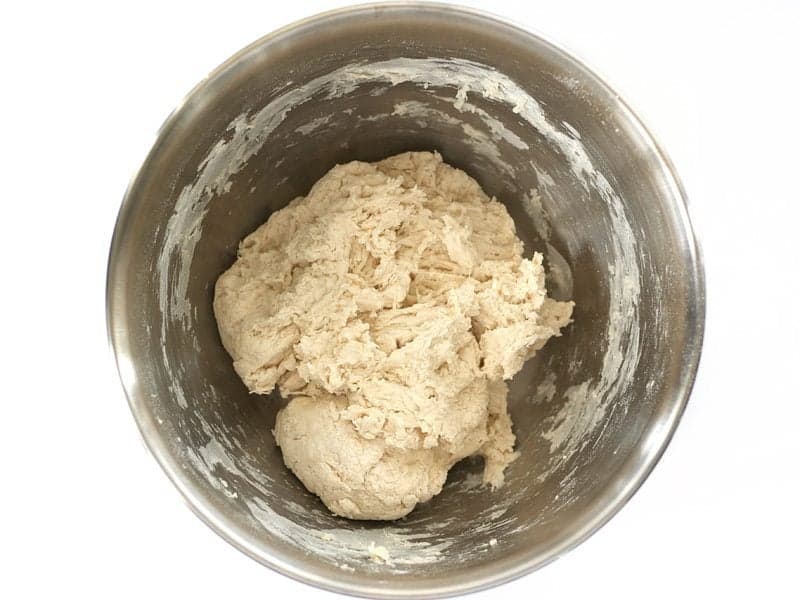 Begin the dough the day before so that it has time to “ferment” for at least 12 hours. In a bowl, stir together 2 cups all purpose flour, 1/8 tsp instant or bread machine yeast, and 1 tsp salt. Once those are well combined, add 1 Tbsp olive oil and 3/4 cups water. Stir until the dough forms one cohesive ball. See how there is no dry flour left in the bowl and the dough is all in one piece? If needed, add more water 1Tbsp at a time until it forms this sticky ball of dough. 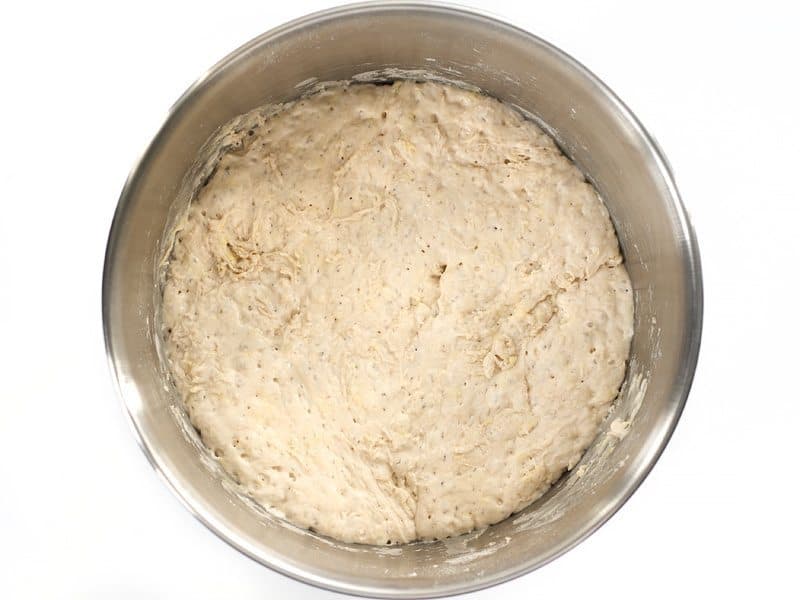 Loosely cover the dough and let it ferment at room temperature for at least 12 hours. During that time, it puffs up and becomes light and airy. It’s still very sticky, though… 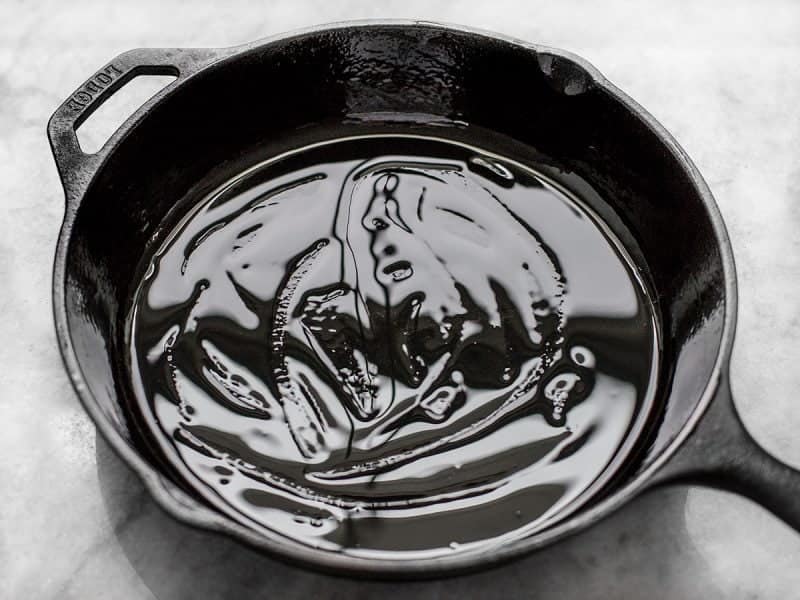 Begin to preheat your oven to 450 degrees. It needs to be FULLY heated before you put the pizza in there. Add 1 Tbsp olive oil to a 10 or 12 inch cast iron skillet and spread it around. There will be a LOT of oil, but that’s what gives pan pizza that awesome crispy crust. 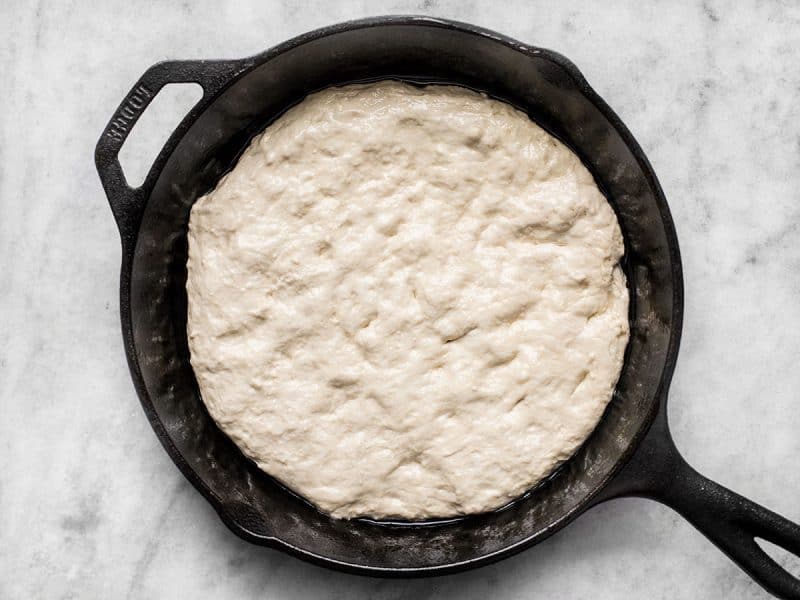 Use some of that excess oil to coat your hands and that sticky ball of dough, then transfer it from the bowl to the skillet. Press it out until it covers the bottom of the pan. The dough will be VERY loose and should be easily manipulated. 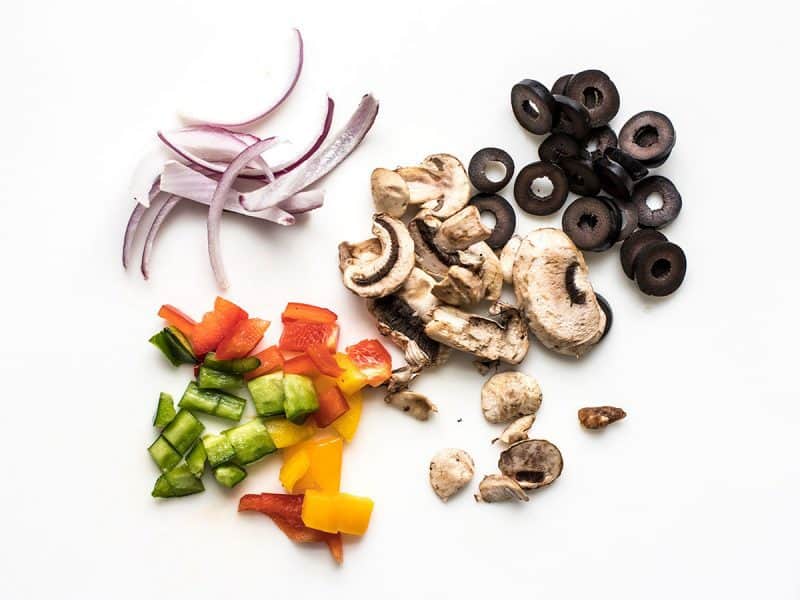 Instead of buying a bunch of things to add to the top of this pizza, I stopped by the salad bar and got a small scoop of black olives, bell peppers, mushrooms, and red onion. The small handful of toppings was only 84 cents! Much better than buying a whole package or item of each then trying to figure out how to use up the leftovers. 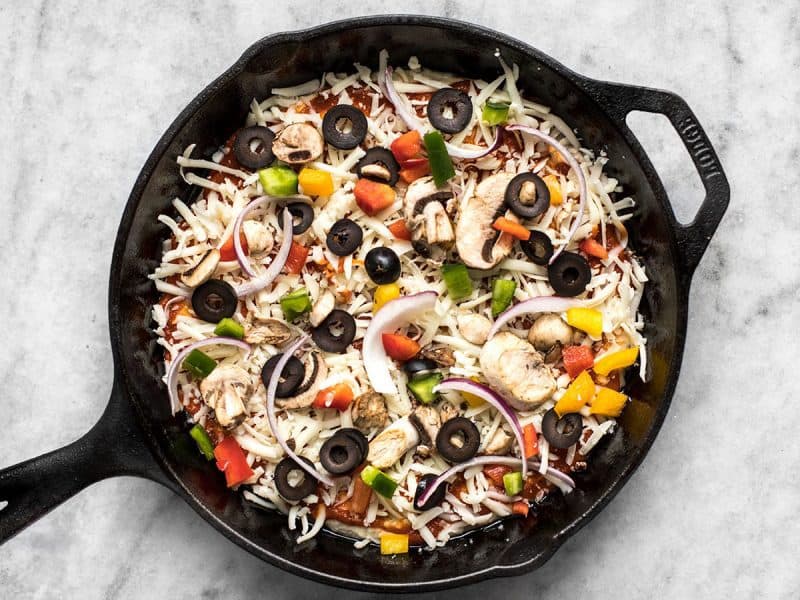 Top the pizza with sauce, cheese, and your veggies (I used leftover sauce and cheese from my fridge). Go ahead and spread the sauce, cheese, and toppings ALL the way out to the edge. The dough will be thick once baked, so you need all those toppings to go to the edge to balance all the bread and keep things moist. By this time the oven should have finished preheating, so go ahead and pop the pizza in the oven. Bake it for about 18-22 minutes (depends on your pizza, toppings, skillet, and oven), or until the edges are browned and the cheese is bubbly all over. 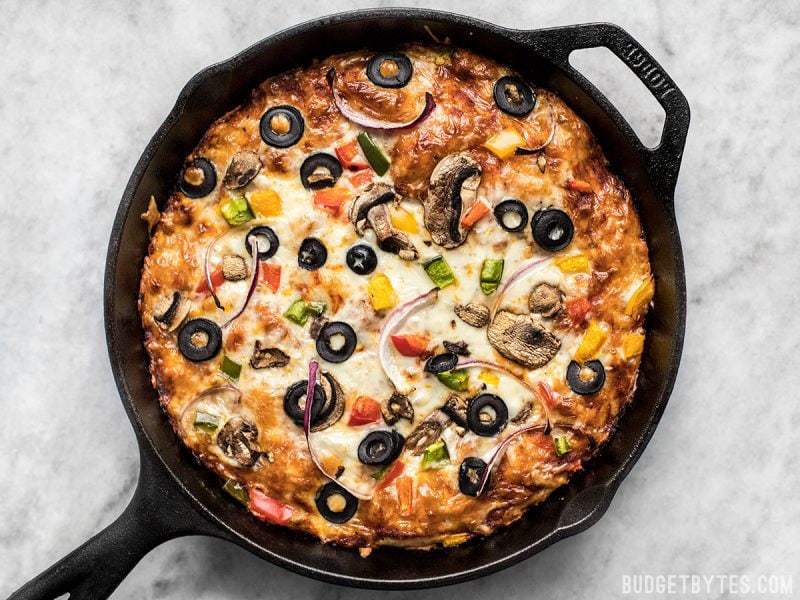 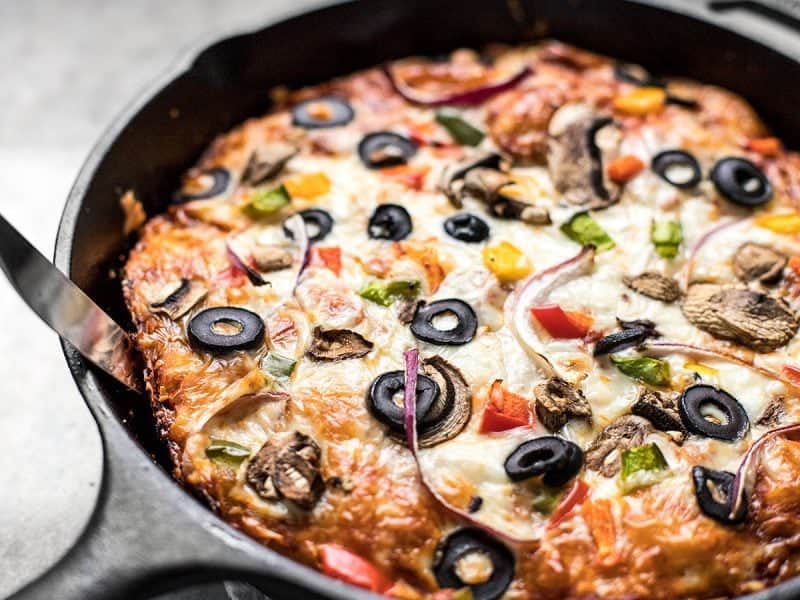 You’ll want to run a knife around the edges to loosen any cheese that has stuck to the side. Because we used so much oil in the pan, nothing should really be too difficult to loosen. Once loose, I suggest sliding the pizza out onto a cutting board to slice, rather than leaving it in the pan like I did for the photos. It’s rather hard to cut while in the pan and you may damage the finish on your cast iron!

Crispy on the outside, soft and fluffy inside, all around moist and delicious.