Skip to content
Canned salmon is a great shelf-stable way to get your inexpensive way to work a little more fish into your diet. I love the convenience of canned fish. No cooking necessary, it’s there when you need it, and you don’t have to worry about using it right away after buying. While canned salmon is a little more expensive than tuna, it’s still a nice occasional treat. When paired with kale and pasta, both inexpensive ingredients, this Kale and Salmon Caesar Salad ends up being quite affordable! 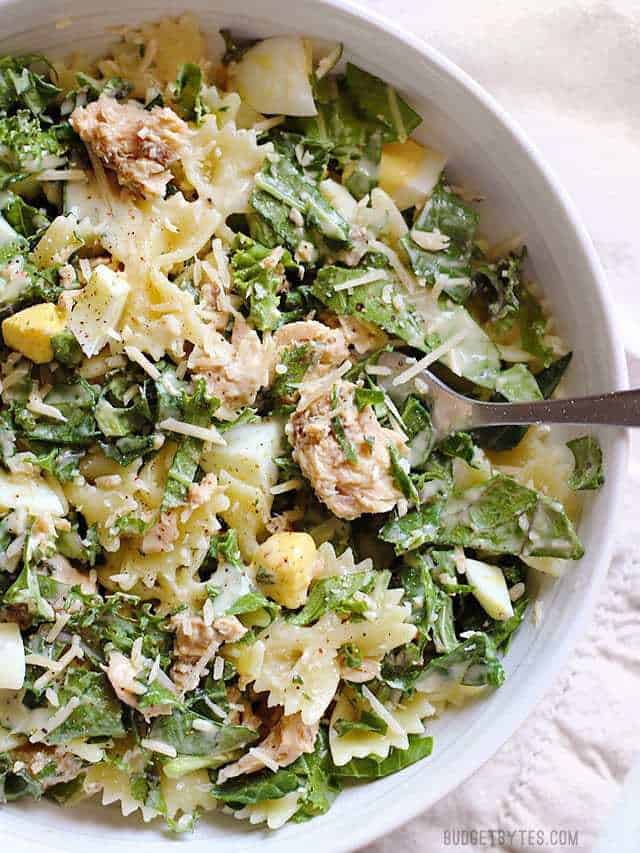 The 14oz. can of salmon I bought was $3.99 and when you consider the fact that wild caught fresh salmon will probably be at least double that per pound, I think it’s a pretty great deal! It wasn’t too pretty when I first opened the can and it wasn’t exactly pink, but once I broke it up into pieces and removed the skin, it was visually on par with canned tuna. Nothing to look at, but still quite delicious. My particular salmon came “with skin and bones”, so I just scraped off the skin (but you can eat it if you want) and removed any large bones. Most of the bones were hair thin and quite soft (probably gelatinized by the canning process) and were therefor quite edible. Full of dietary calcium, even!

Can I Substitute the Kale?

Yes, you can make this salad with Romaine or even spinach, if you’d like, just keep in mind that neither will hold up to refrigeration as well as the kale.

What Kind of Dressing Should I Use?

I used a creamy Caesar dressing for this salad (Girard’s to be exact). You can use a non-creamy caesar dressing, if you prefer, but I find that a creamy version pairs better with this salad.

Can I Use a Different Pasta Shape?

Yes, you can use any small or short-shaped pasta, like orzo, penne, or orecchiette. Or, you can skip the pasta and add homemade croutons in its place. 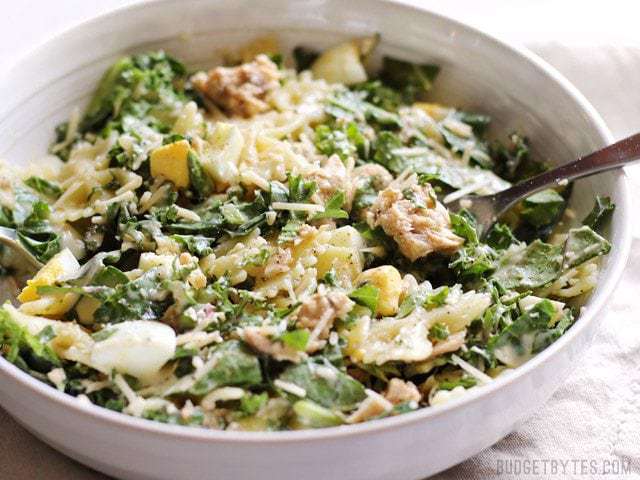 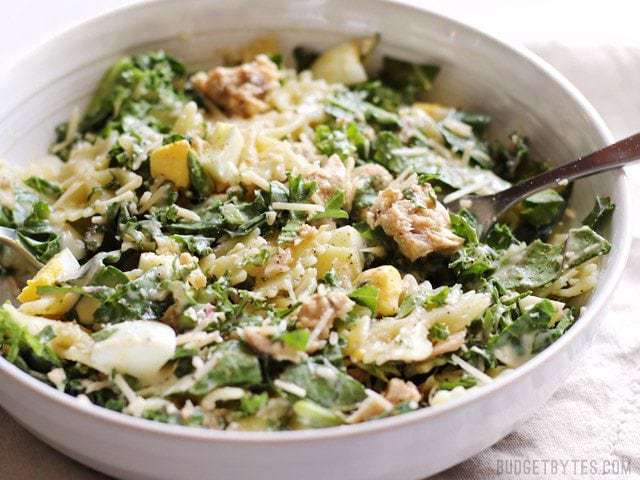 *I used pre-washed and chopped kale that came in a bag, then chopped it further into smaller pieces. 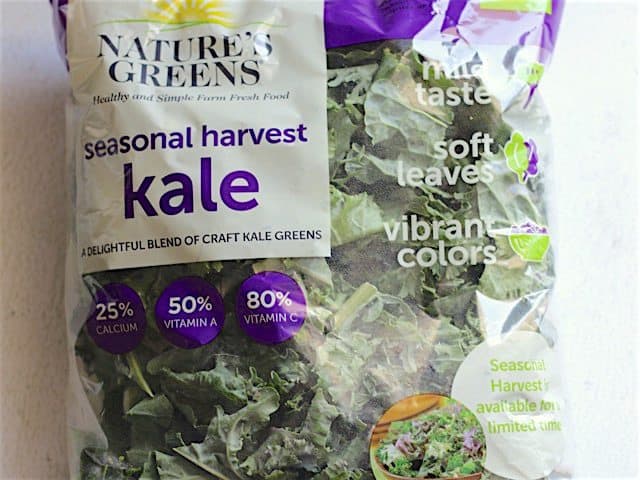 Start by cooking 8oz. bowtie pasta according to the package directions. While the pasta is cooking, prepare the kale. I bought a 12oz. bag of kale today because the whole bunches were a little on the expensive side and this one bag for $2.99 is roughly the same as one and half bunches, plus it’s already chopped and stems removed! :D I used half of this bag, or about 6 ounces. 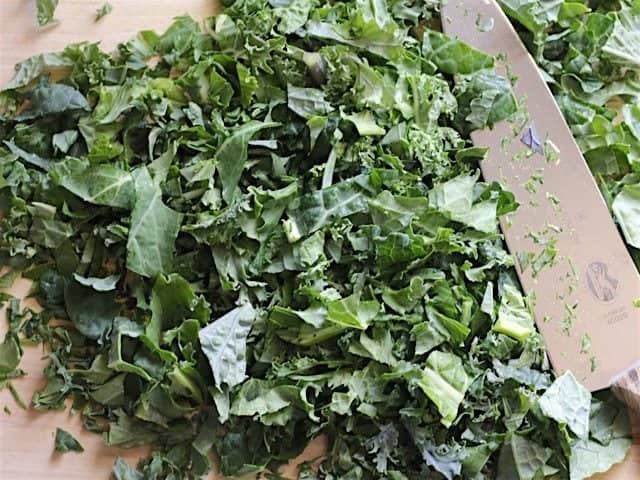 Because I was leaving my kale raw, I wanted even smaller pieces to make it easy to chew and digest. So, I chopped it up a bit more and pulled out any random pieces of stems that got left behind. 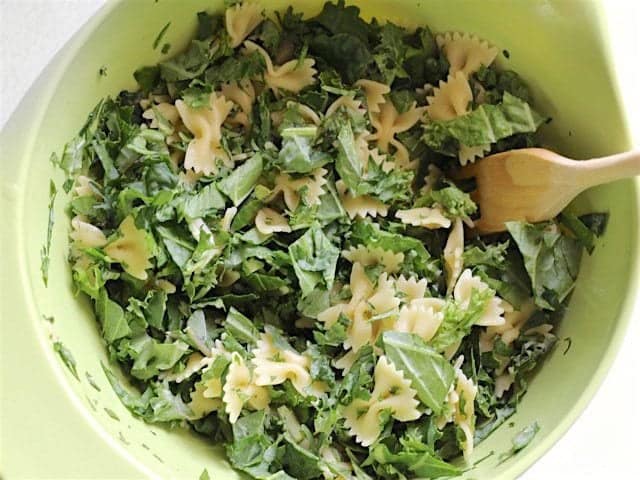 Once the pasta is drained, add it to a large bowl with the chopped kale. Stir it up and allow the residual heat from the pasta to soften the kale just a touch. 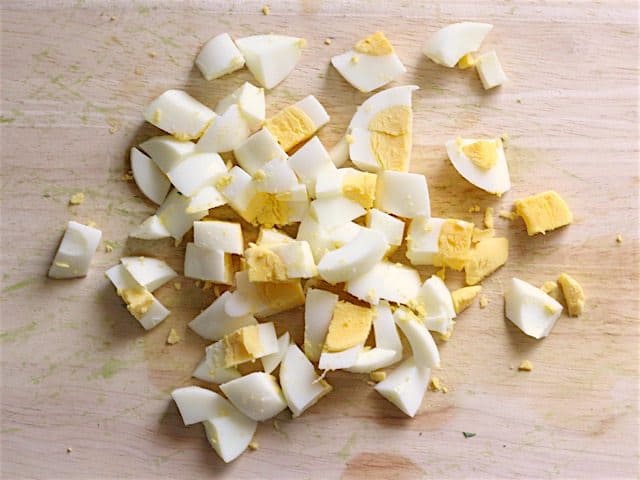 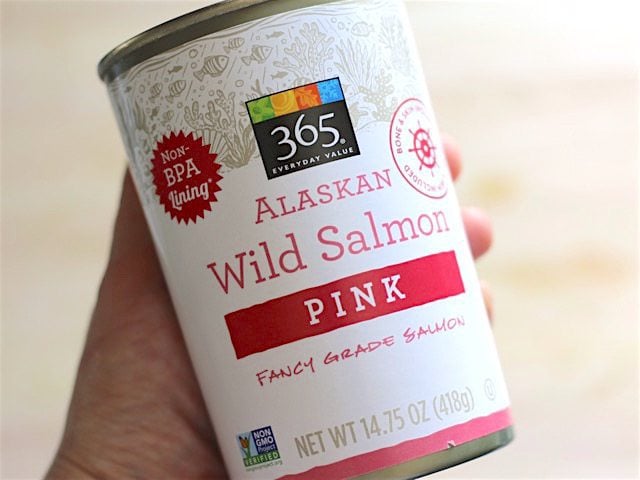 This is the canned salmon that I used. I was happy to be able to find wild caught canned salmon. Honestly, it wasn’t pretty when I opened the can and you should be thankful I didn’t take a photo of that part… 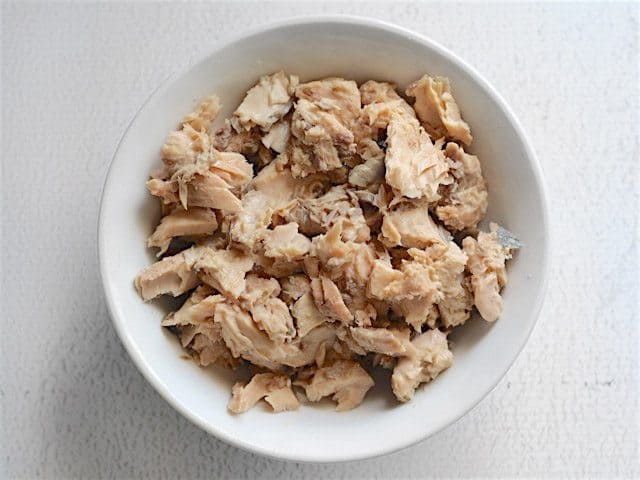 But once I scraped off the dark skin, removed any large bones, and broke it into chunks, it pretty much just looked like tuna. Not very pink, but it still tasted great! This 14oz. can of salmon actually yielded quite a bit of meat, so next time I might go for the smaller can and use one more egg to make the salad even less expensive. Gotta tweak those ratios sometimes. 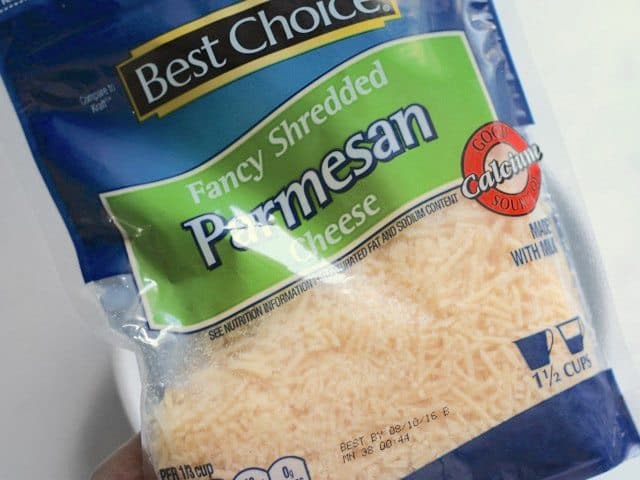 I really wanted shredded Parmesan for this salad instead of grated, although grated will work if that’s what you have. I find the shredded to be a bit more potent in flavor and it makes a striking visual presence on the salad. Finding shredded Parm with the bagged cheese was a great because it was about half the price of the shredded Parmesan at the cheese counter. So, be sure to check both places. 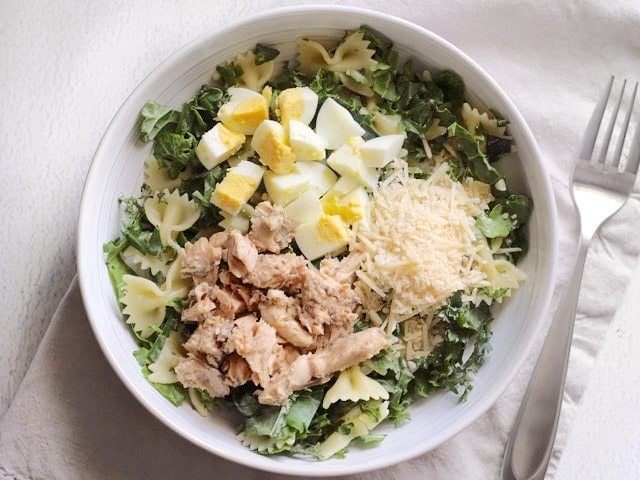 Now it’s time to build the salad. If you’re doing it all in one large bowl, just add the diced eggs, salmon pieces, and 1/2 cup shredded Parmesan to the pasta and kale. 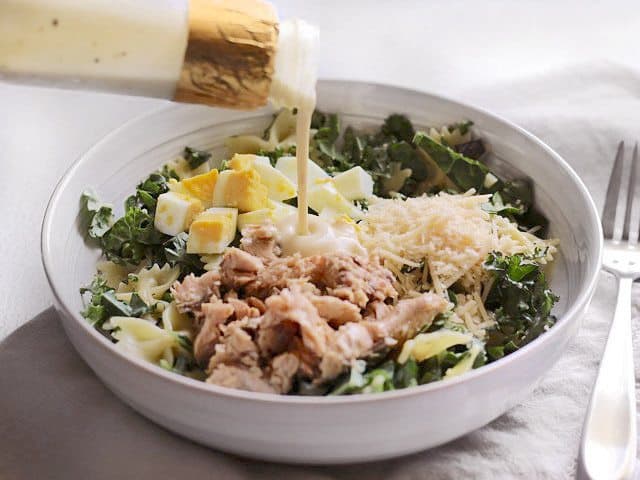 Finally, add some creamy Caesar dressing (I used about 1/2 cup for the entire salad) and stir to coat in the dressing. 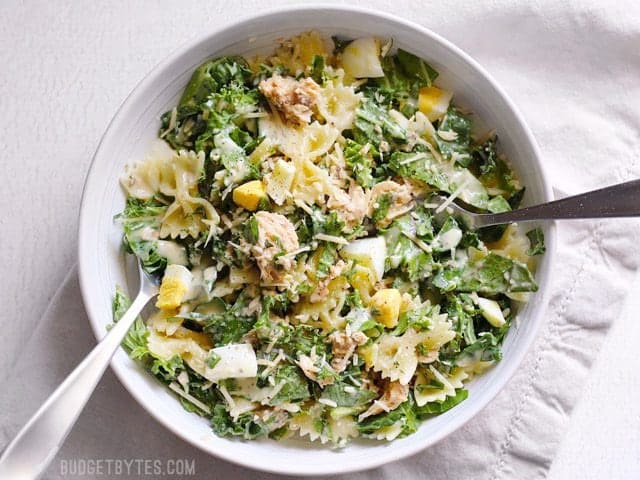 Now EAT! And be happy. 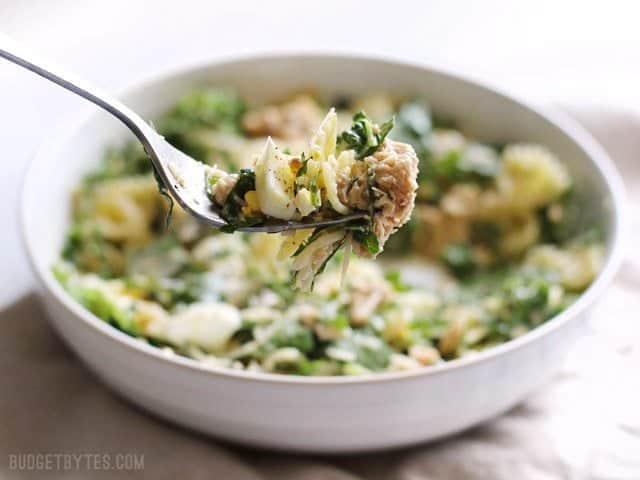 Check out these other great salads