It’s so interesting how different the grocery prices are here in Nashville compared to my previous home in New Orleans. Most notably, canned beans are about half the price and grape tomatoes are so much more affordable! So today I whipped up this Garlic Toast with Balsamic Tomatoes and White Beans for lunch using those wonderful little tomatoes and some canned Cannellini beans. 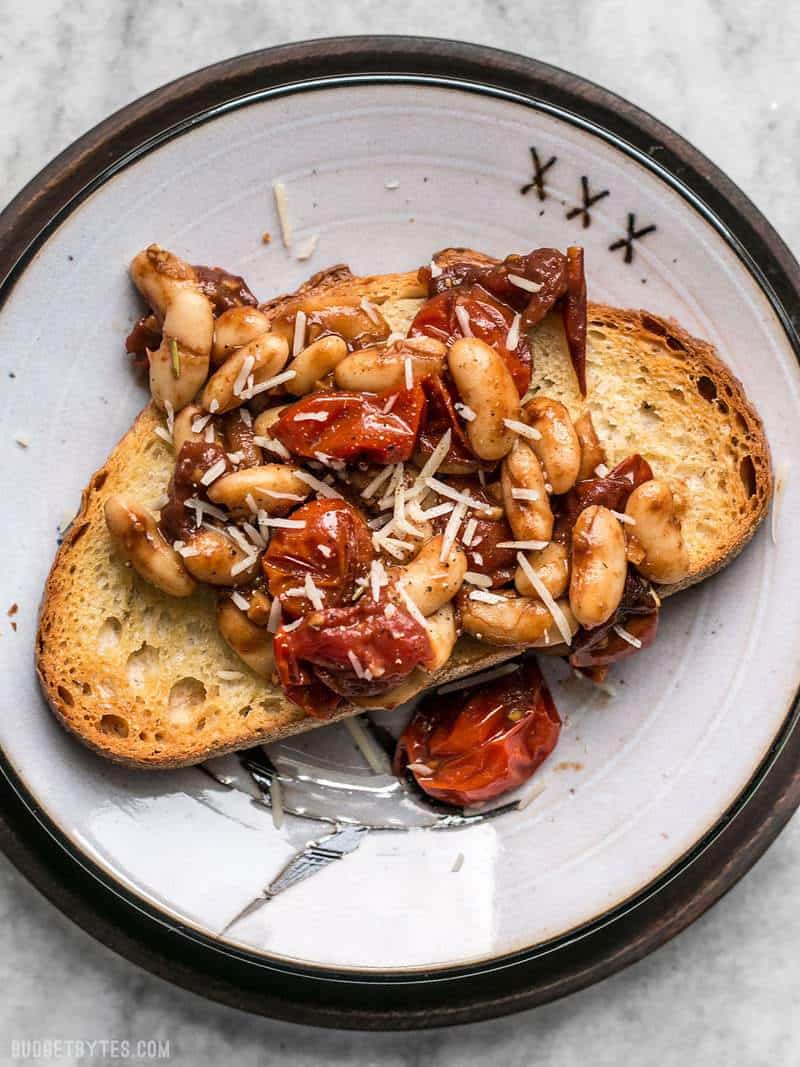 What Kind of Bread Should I Use?

A good sturdy artisan bread is the best vehicle for these saucy balsamic tomatoes and white beans. If you don’t want to do bread, you could always pile these jammy tomatoes and beans on top of a little pasta (any shape). Or, if you plan ahead, you can make some no-knead bread yourself for super cheap!

How to Serve Garlic Toast with Balsamic Tomatoes and White Beans

I priced these per toast and today I actually just ate the toast by itself (I had a large breakfast), but for a more full meal I suggest serving this with a nice green salad or even some roasted vegetables. The Garlic Toast with Balsamic Tomatoes and White Beans is more filling than it appears. 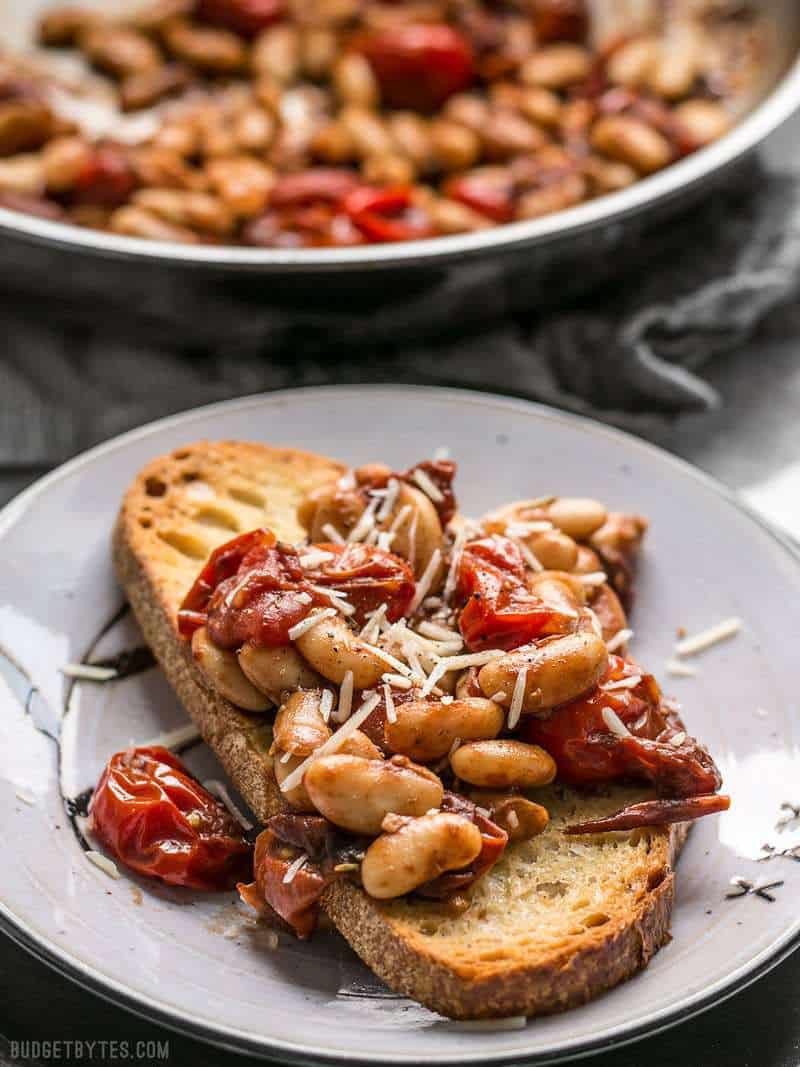 5 from 18 votes
For a quick, flavorful, and light lunch, this Garlic Toast with Balsamic Tomatoes and White Beans hits the spot! 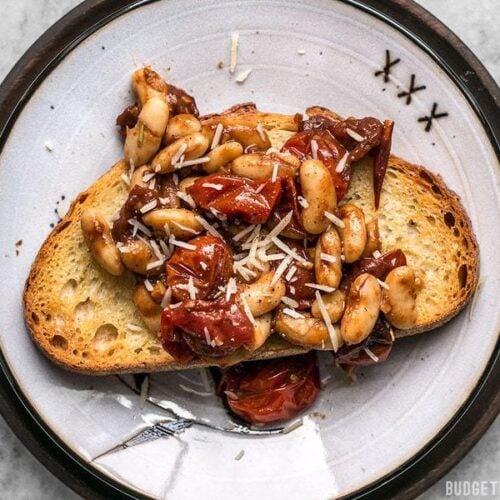 *When using dried rosemary I like to crush it between my fingers before adding to the recipe to make sure there are no large, sharp needles in the food. This also helps release the flavorful oils in the herb. 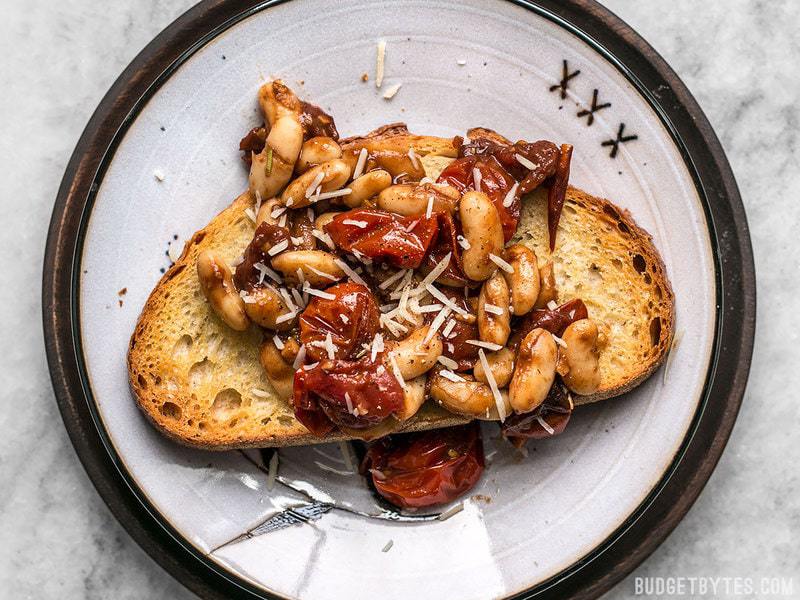 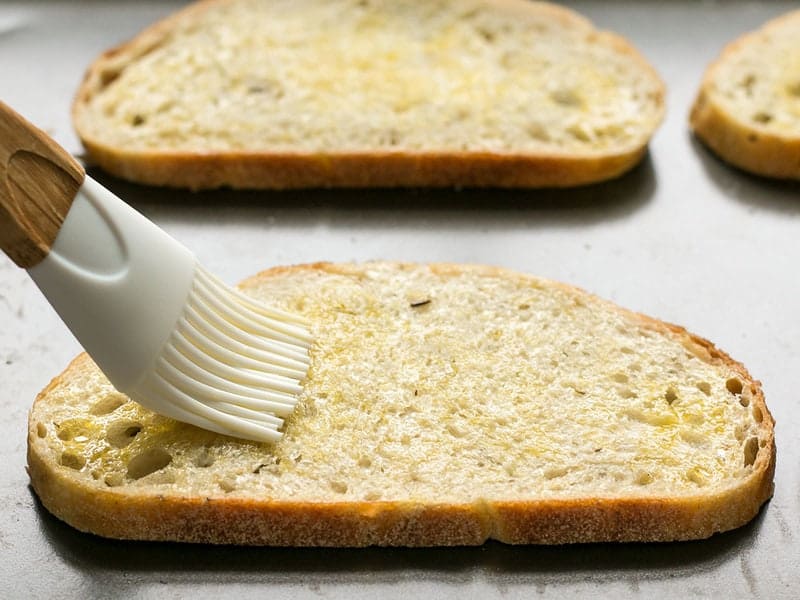 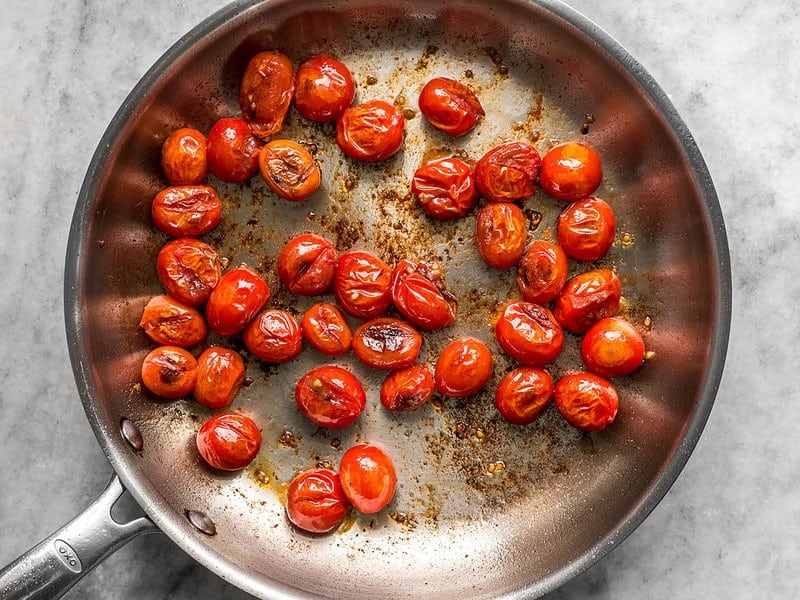 Heat a large skillet over medium, then once hot add the remaining olive oil (there should be at least 1 Tbsp). Swirl the skillet to allow the oil to coat the surface. Add one pint grape tomatoes and allow them to cook, stirring only occasionally, until they have blistered, burst open, and begun to lose their shape like in the photo above. While the tomatoes are cooking, mince the clove of garlic that was used to rub the bread. 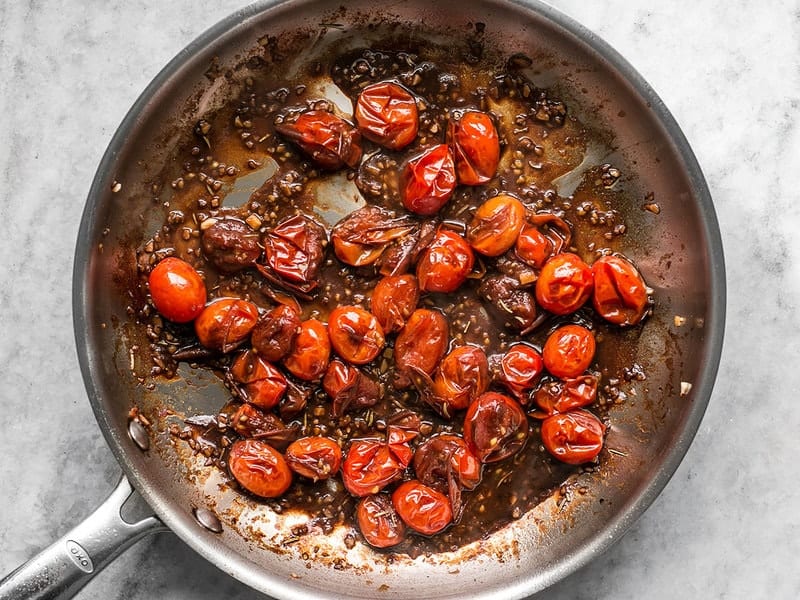 Add the minced garlic to the skillet and continue to sauté for about 1-2 minutes, or just until the garlic softens and loses its raw edge. Turn the heat down to medium-low, and add 2 Tbsp balsamic vinegar and a large pinch (about 1/8 tsp) of dried rosemary to the skillet (I like to crush the rosemary in my fingers so there are no large pieces).

Stir and cook the balsamic vinegar so that it dissolves all the browned bits from the bottom of the skillet and begins to thicken slightly. Once thickened (this should happen within a couple of minutes), turn the heat down further to low and add 1 Tbsp butter and a pinch of salt. Stir the butter in until melted. 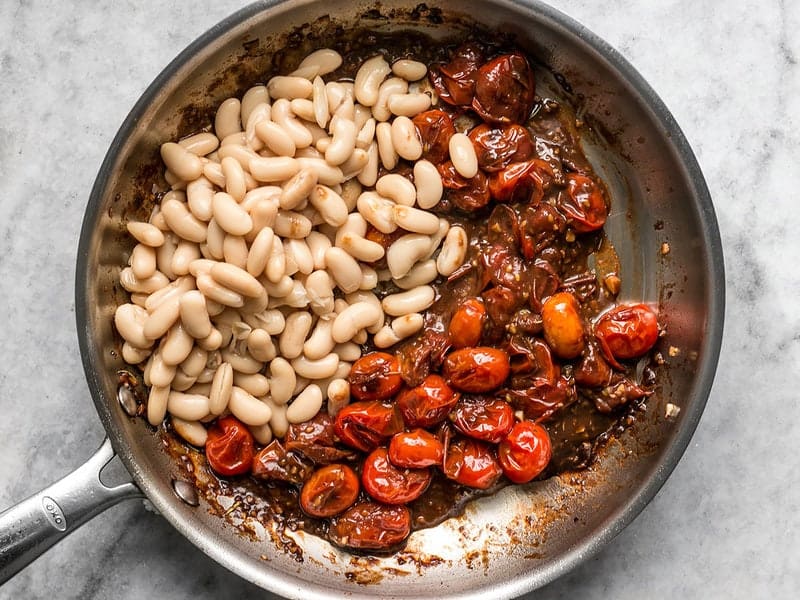 Rinse and drain a can of Cannellini beans. Add them to the skillet with the balsamic tomatoes. 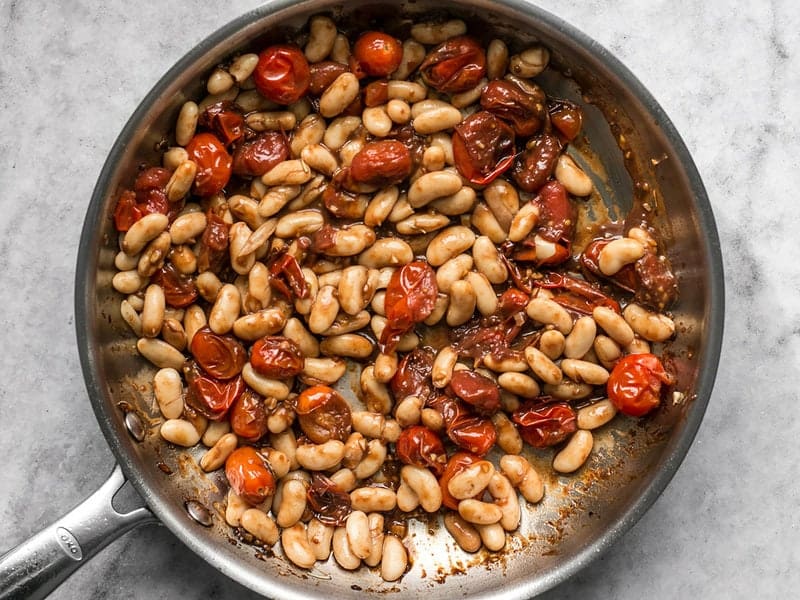 Stir until everything is combined, then let it heat through over low. While the beans are heating, turn the oven on to broil and transfer the baking sheet with the bread into the oven. Watch the bread closely and remove it from the oven once the surface of the bread is golden brown (depending on how close the oven’s rack is to the broiler, this could take only a few minutes). 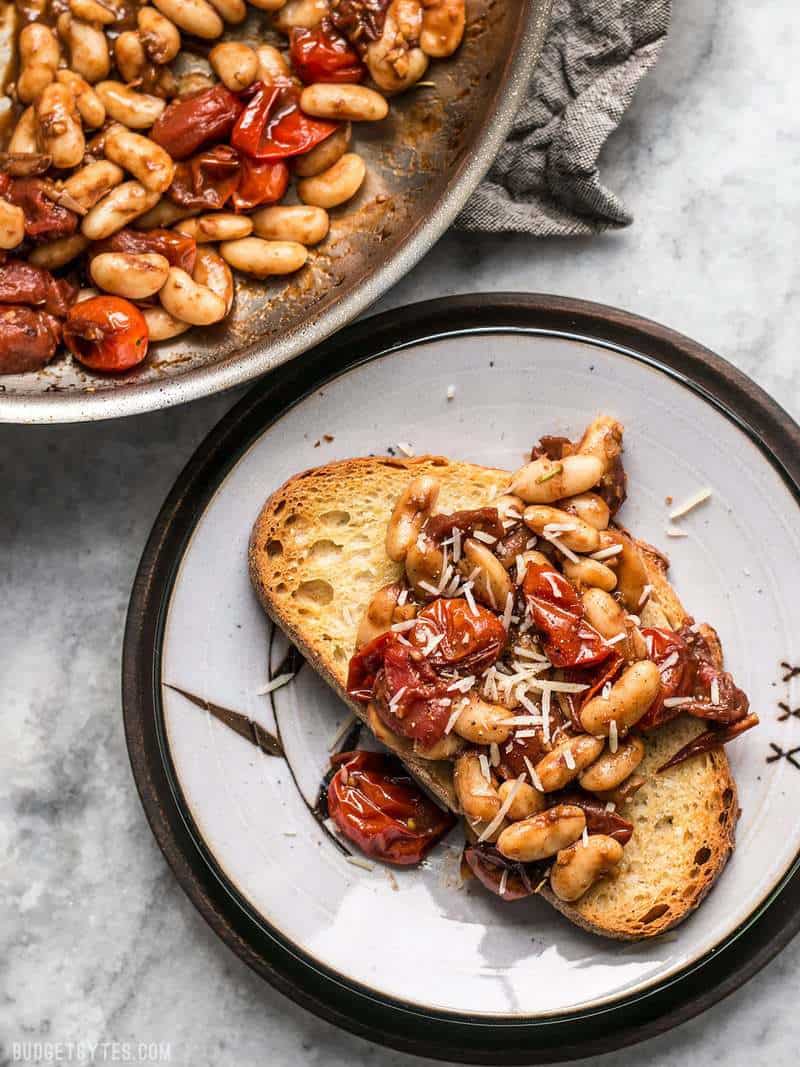 To serve, spoon the balsamic tomatoes and white beans over each slice of bread and top with a pinch of Parmesan.