Ever since I discovered how delicious pasta is when cooked in broth instead of water, I’ve been experimenting with all sorts of different ways to play up this simple trick. By simply changing up the add-ins, you can have an endless number of quick one pot or one skillet dinners for busy week nights. This Bacon and Spinach Pasta with Parmesan is my latest quick skillet obsession. 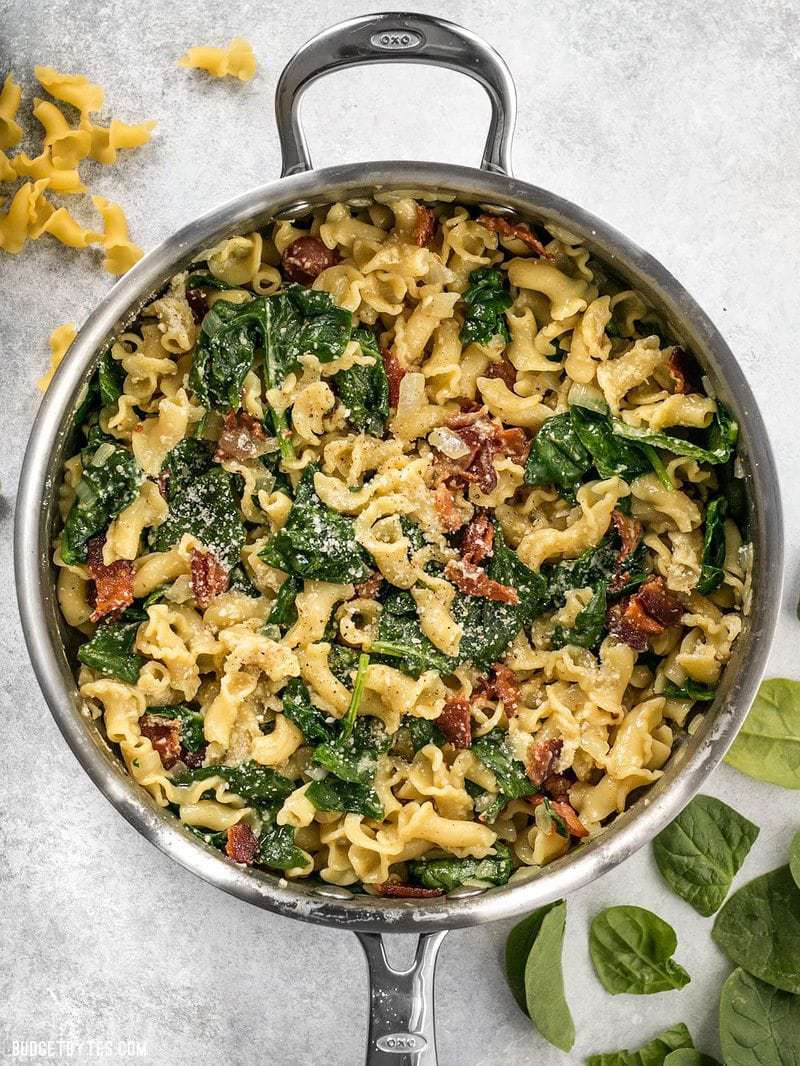 Bacon, spinach, and Parmesan are not exactly the least expensive ingredients on the planet, so you do have to be a bit careful with this one. I used a half package of bacon and froze the rest for later use. To save on spinach, I skipped the salad sized bags and got a jumbo bag of “cooking spinach”. The big one pound bag was only 20 cents more expensive than the smaller salad sized (9oz.) bags and almost twice as big. I’ll enjoy the extra spinach as salads and freeze some in smoothie packs.

Can I Use Frozen Spinach or Other Greens?

Frozen spinach can be used in a pinch, but make sure not to get “chopped” frozen spinach because it will be in a million tiny little pieces. You can use other greens, like collards, mustard, or kale, but because they’re quite a bit more sturdy, they’ll need to be sautéed down with the onion in the beginning. Parmesan really does top off this dish and make it grand, but you can lighten up on it if you’re strapped for cash. Parmesan is very flavorful, so a little goes a long way.

If you want to beef up this dish a bit, you can add a rinsed and drained can of white beans, or sauté some mushrooms with the onions. A few red pepper flakes would be nice in here, too, although I like red pepper flakes on just about anything! 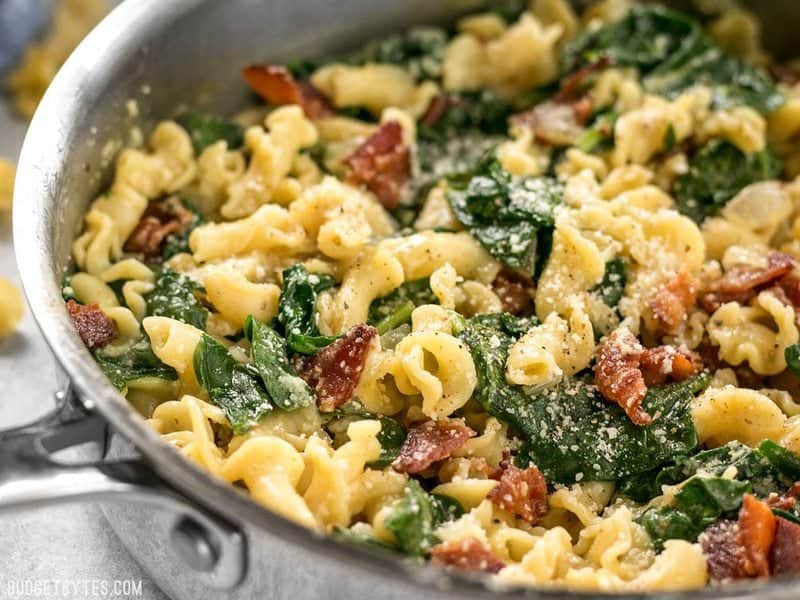 Bacon and Spinach Pasta with Parmesan

4.68 from 106 votes
Bacon and Spinach Pasta with Parmesan is a quick and flavorful weeknight dinner that only requires a few ingredients.
Author: Beth - Budget Bytes 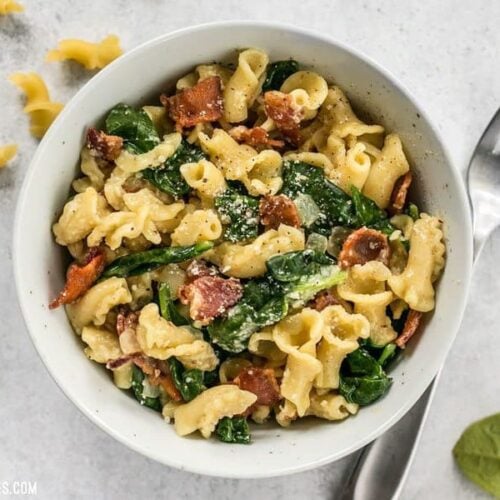 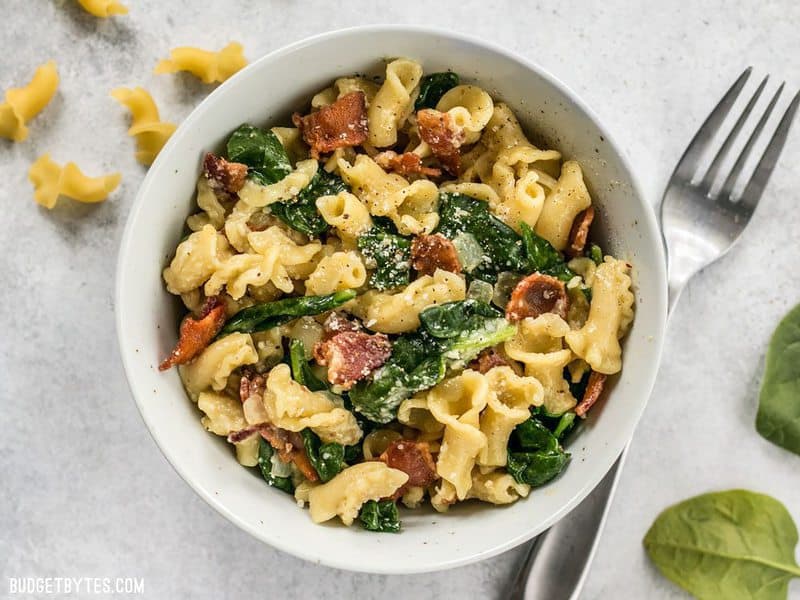 How to Make Bacon and Spinach Pasta – Step by Step Photos 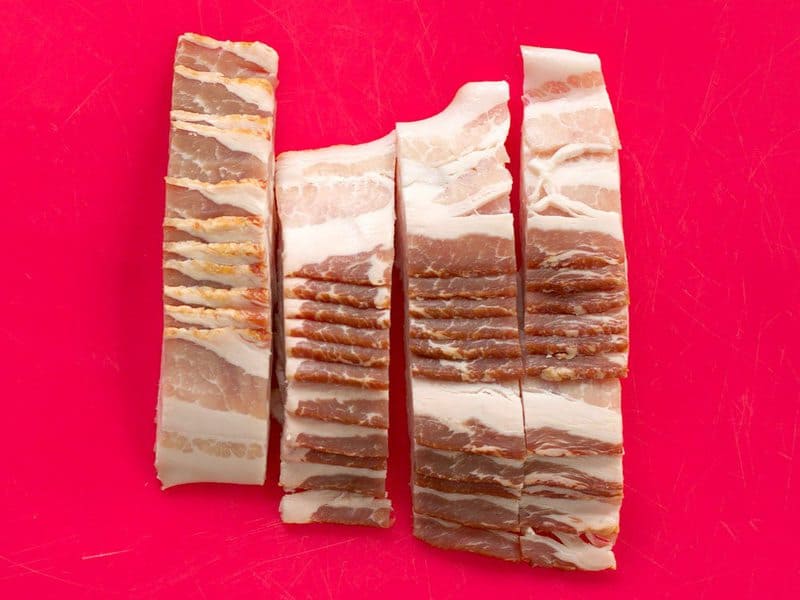 Cut 6 oz. (1/2 of a 12oz. package) of bacon into one-inch strips. The second half will be frozen and used later. I love adding a little bacon to soups and other dishes because it adds a LOT of flavor. Or who knows, maybe I’ll just use the leftovers for an impromptu weekend brunch. 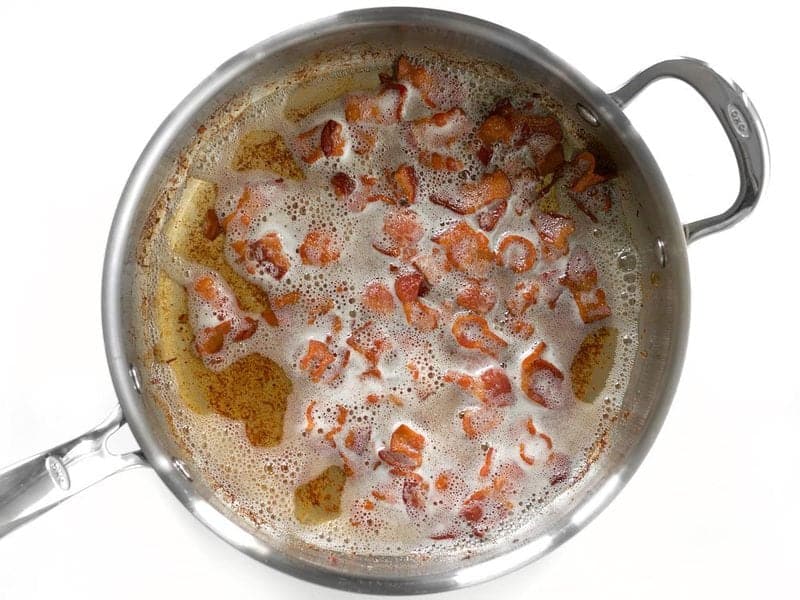 Sauté the bacon in a large skillet over medium heat until it’s brown and crispy. I didn’t add any extra oil to the skillet because the bacon is fatty enough that it releases quite a bit of grease and does not stick. Once the bacon is crispy, remove it to a bowl with a slotted spoon, and pour off the fat into a separate container, leaving about 1 tablespoon of fat in the skillet (for flavor, of course!). When the poured off fat is cool, save it in the refrigerator to add flavor to other dishes, or if you’re not the bacon grease type of person, scoop it into the garbage. Just DO NOT rinse it down your drain. 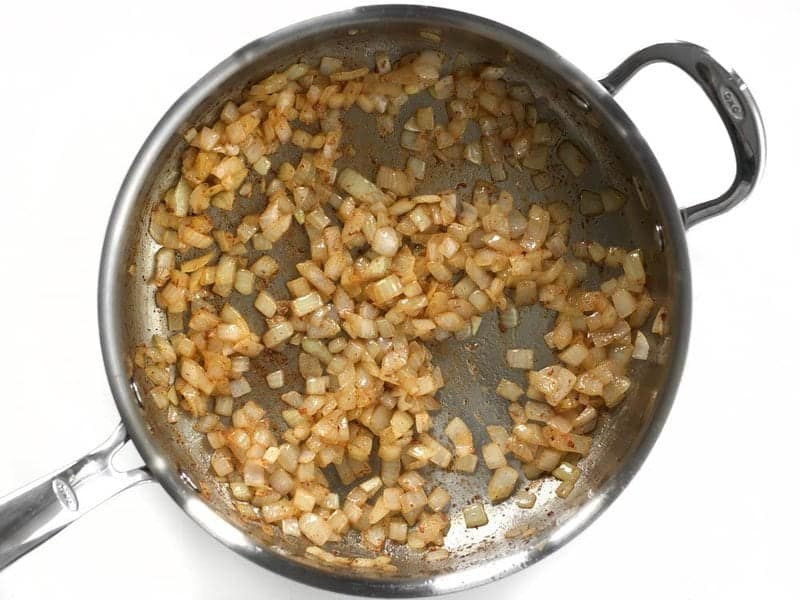 While the bacon is cooking, dice one small onion. Add the onion to the skillet and sauté until it is soft and transparent. The juices from the onion will begin to dissolve the browned bacon bits from the bottom of the skillet. 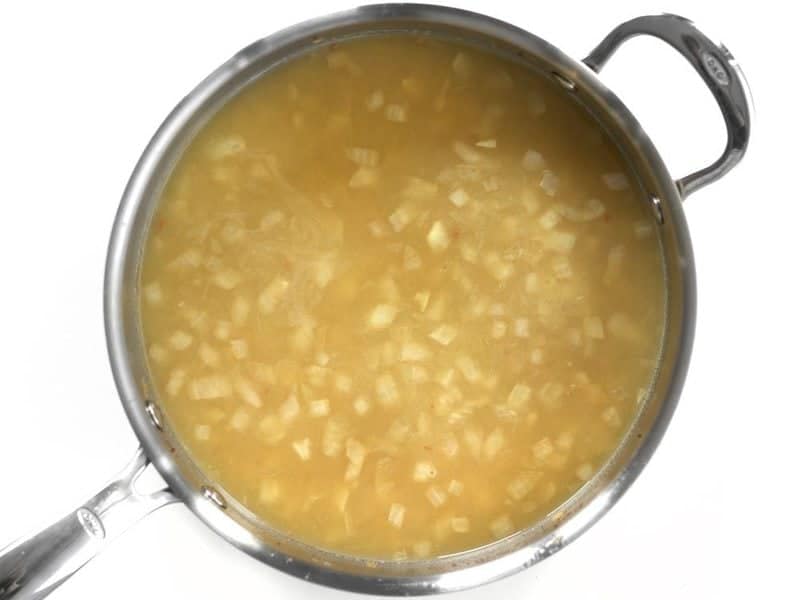 Add two cups of chicken broth to the skillet. Stir well to dissolve the last of the browned bits from the bottom of the skillet. 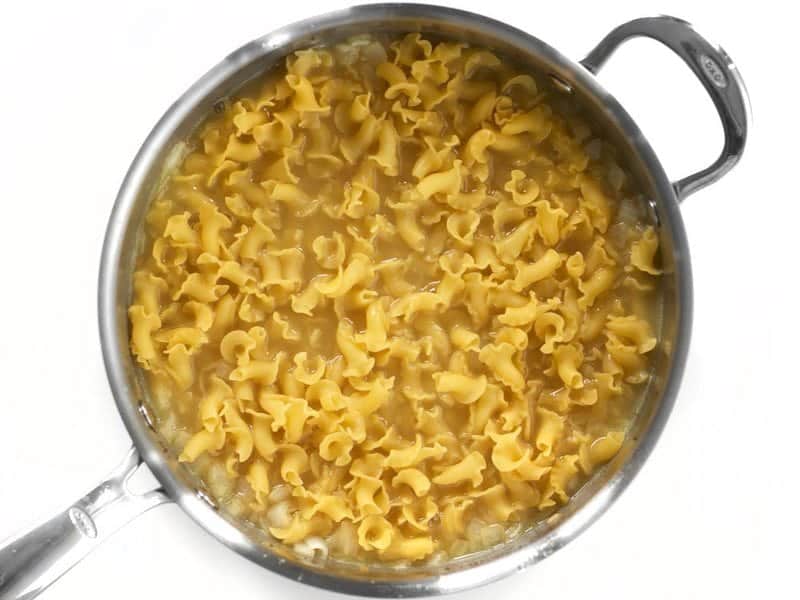 Add the dry pasta to the skillet and place a lid on top (it’s OKAY if the broth doesn’t completely cover the pasta). Turn the heat up to high and let the skillet come to a boil. As soon as it reaches a boil, give it a quick stir, turn the heat down to low and let it simmer for 10 minutes. Every few minutes, give the skillet a quick stir to loosen the pasta from the bottom and replace the lid quickly each time so that the broth continues to simmer. Make sure the broth continues to simmer the entire time, turning the heat up just slightly if needed to maintain a simmer. 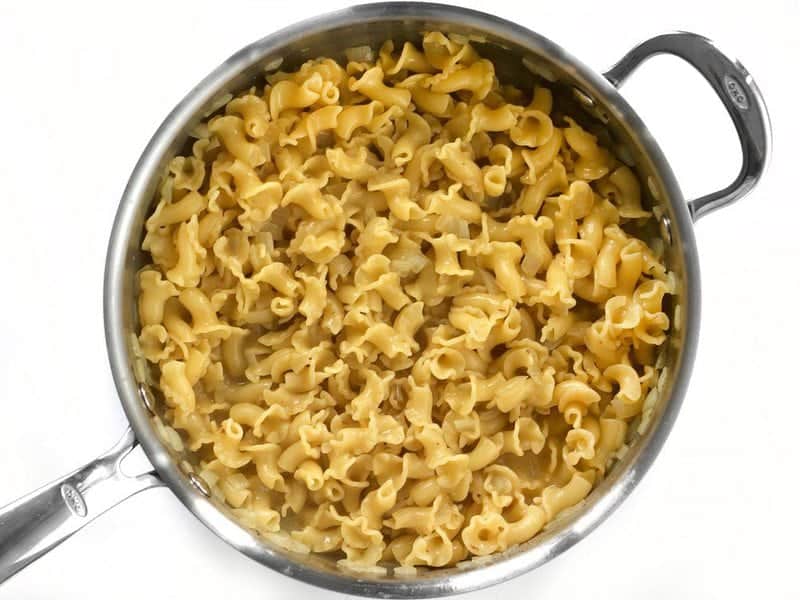 After about 15 minutes, the pasta should be tender and most of the broth absorbed. There should be a bit of saucy broth left in the bottom of the skillet. 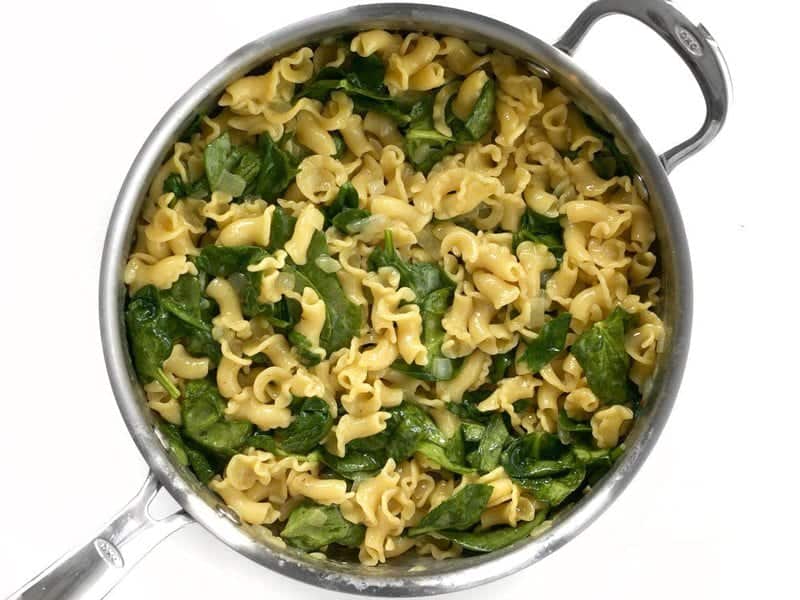 Once the pasta is cooked, add about 1/4 pound (or 3-4 cups) of fresh spinach to the skillet. Add a handful of the spinach at a time and stir it into the pasta until it wilts. 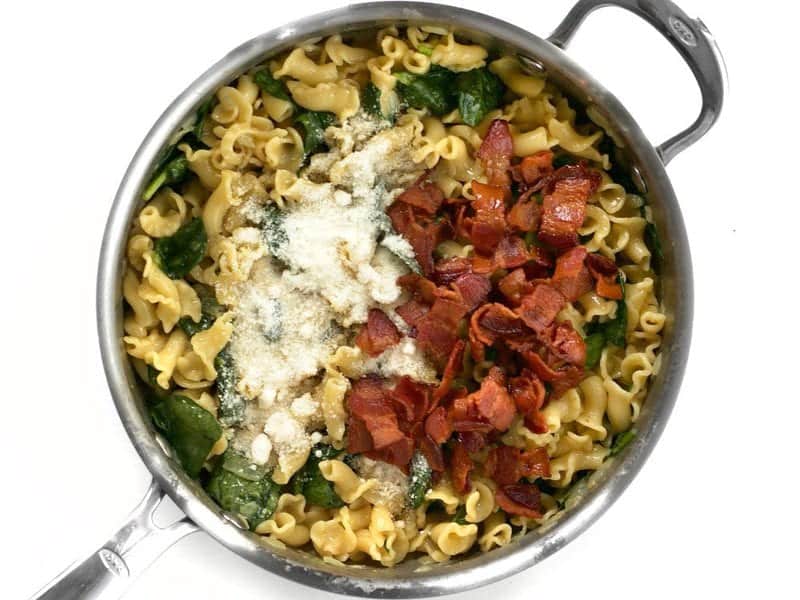 Turn the heat off, add the cooked bacon back to the skillet, and sprinkle the Parmesan over top. Give it a quick stir to combine and then serve! 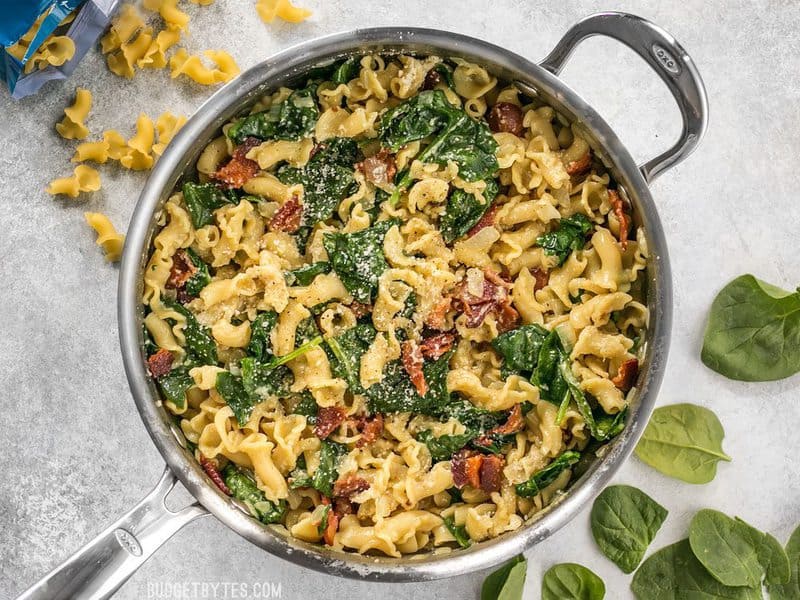 And then it will look like this! Like I said, I probably should have sprinkled a little red pepper or even freshly cracked black pepper over the top just to take it up a notch, but honestly, it’s bacon… I was already dazzled! 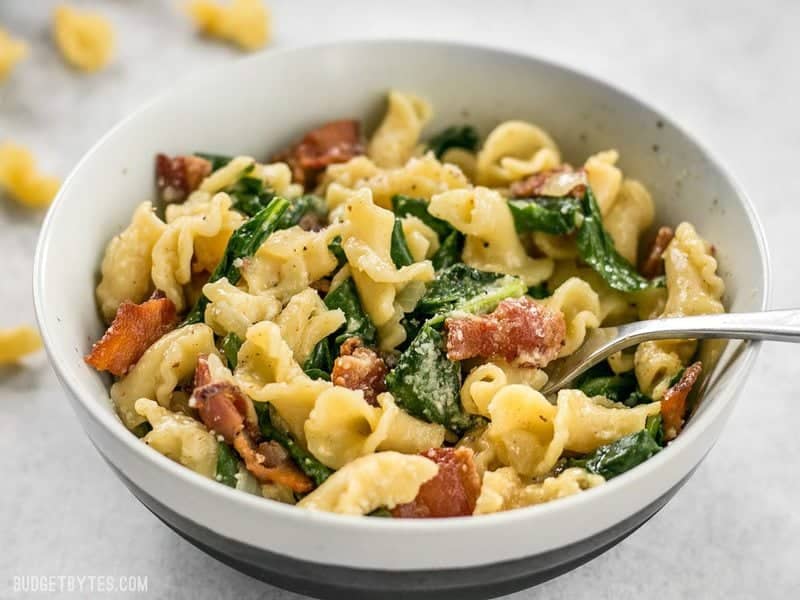