How ’bout we make this Monday a little more delicious, huh? I present to you this decadent Bacon and Caramelized Pineapple Pizza, a sweet and salty lover’s dream. This pizza is sure to make your Monday better, no matter how terrible it is, or even if it’s been the best day of your life. Because bacon pizza makes everything better. ;) 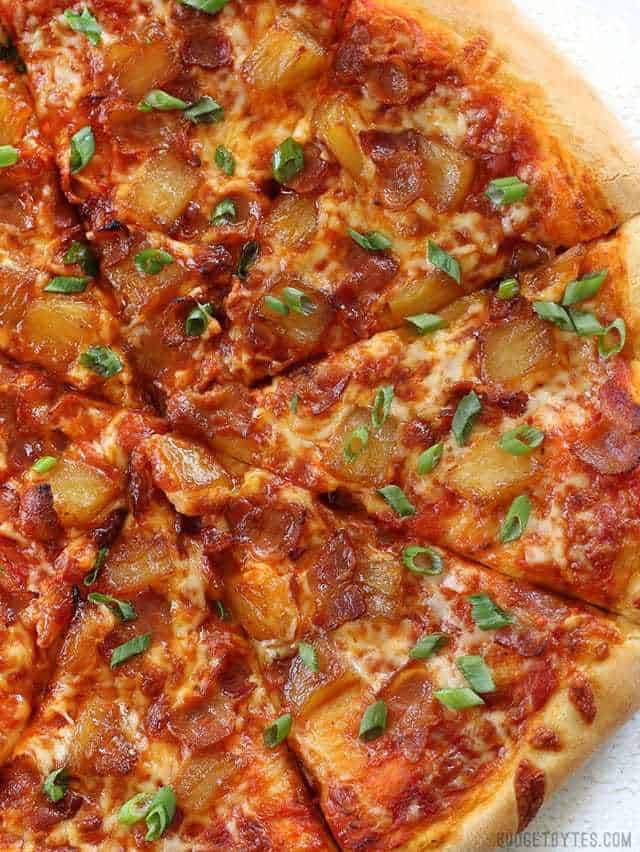 What Kind of Dough Should I Use?

This recipe is all about the toppings, so feel free to put them on whatever dough/sauce combo you like. Say you worked 12 hours today, no biggy. Grab a pre-cooked crust, a jar of sauce, and make this bacon-caramelized-pineapple goodness with as little effort as possible.

Or, if you have time on your hands, make the dough and sauce yourself. I used this Thin and Crispy Pizza Crust recipe (but used the entire recipe instead of dividing it and let it rise for 30 minutes to give it a fluffy texture) and a store-bought jarred sauce for convenience. Here’s my recipe for Thick & Rich Pizza Sauce if you want to make your own.

Bacon and Pineapple is the BEST Pizza Topping Combination (fight me)

The combination of salty bacon with sticky sweet pineapple is so TO DIE FOR that it won’t even matter what kind of dough or sauce you put it on. I do suggest using Monterrey Jack cheese instead of classic mozzarella for this pizza, though, as the creamy Monterrey flavor goes extra nice with these bold toppings. A few green onions add freshness and visual contrast, but sliced jalapeños would also be fab, if you like things spicy. 🔥🌶🍍🐷🍕 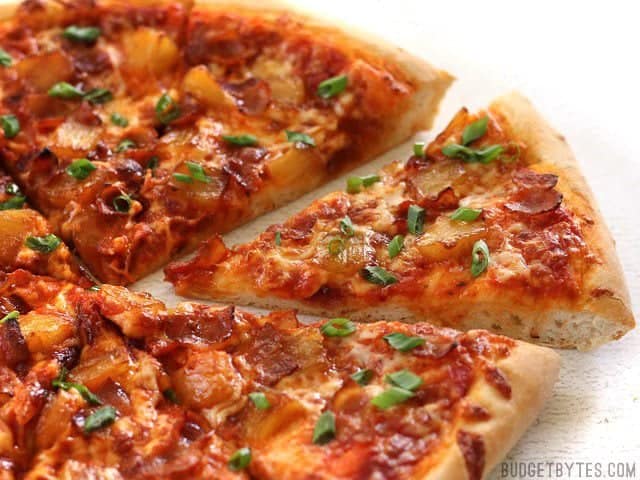 5 from 7 votes
Bacon and Caramelized Pineapple Pizza is everything your sweet and salty dreams are made of.
Author: Beth - Budget Bytes 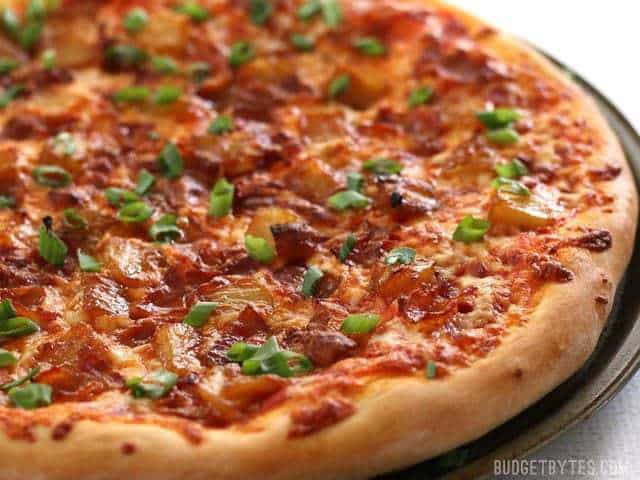 *When I buy 12oz. packages of bacon, I cut it into quarters (across the slices) and freeze what isn't used immediately. That way I can take out one 3oz. portion at a time, as needed, for future recipes. **I used the entire pizza dough recipe instead of dividing it in two. 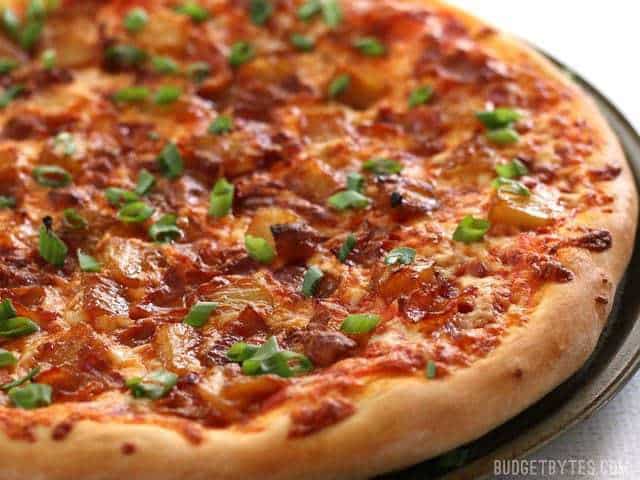 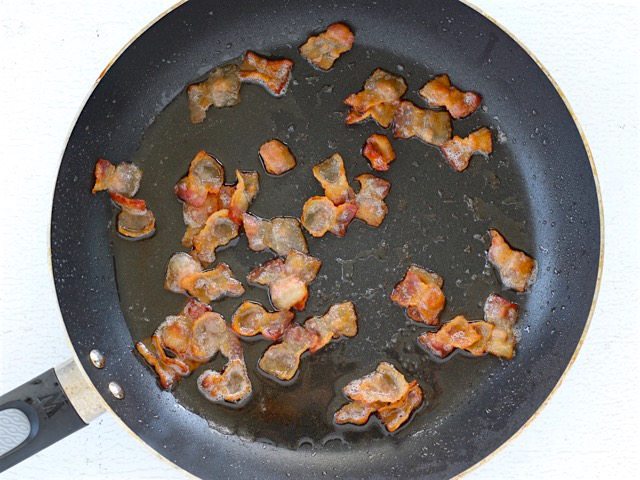 Start by cutting about 3oz. of bacon into one-inch pieces. When I buy a 12oz. package of bacon, I cut it into quarters (across the strips), then freeze it. That way I can take out 1/4 of the package (or 3oz.) at a time to use in a recipe. After I took my 3oz. section of bacon out of the freezer, I sliced it into smaller pieces, then cooked it over medium heat until it was about 75% cooked–brown and crisp on the edges, but still kind of soft in the middle. The bacon will continue to cook on the pizza, so you don’t want to over cook it. Remove the cooked bacon to a paper towel lined plate, then pour off most of the grease. 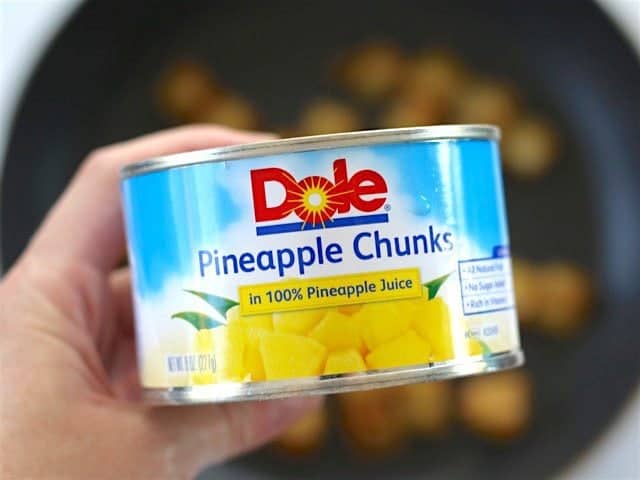 This little 8oz. can of pineapple chunks (in juice) is just the right size for one pizza. Drain the pineapple well (you can save the juice for smoothies or cocktails!), then cut the chunks into slightly smaller pieces (I just cut each chunk in half). 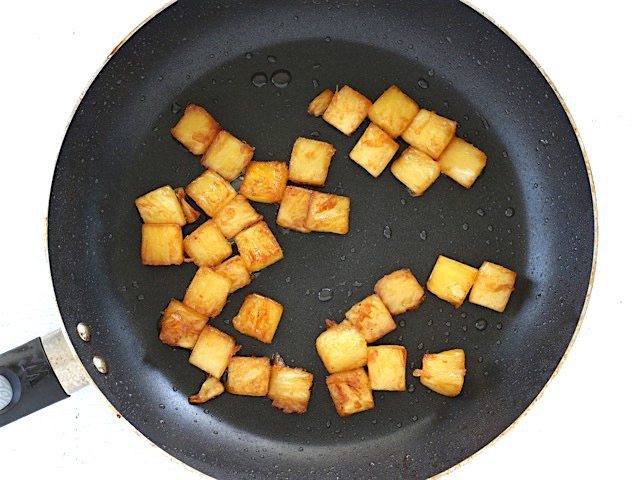 Add the pineapple chunks to the skillet where the bacon was cooked, along with 1 Tbsp brown sugar. Sauté over medium heat until the pineapple gets kind of brown and sticky on the edges. I specifically chose a non-stick skillet for this task because sugary foods tend to stick pretty bad to stainless steel and I didn’t want to deal with that. :P 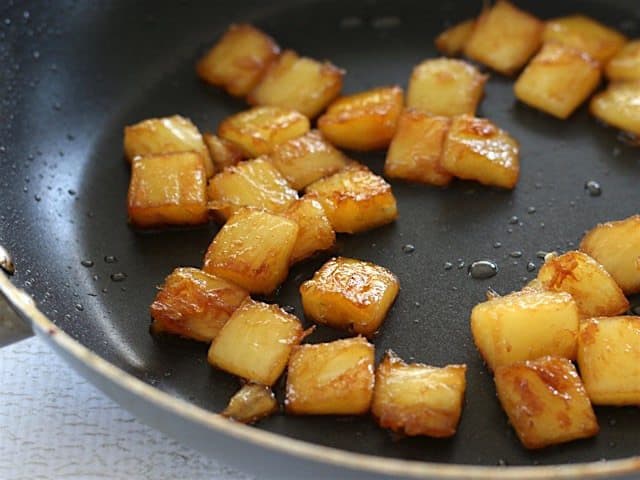 The pineapple will look a little brown right away from the brown sugar, but it won’t actually begin to caramelize until some of the juice evaporates from the chunks. Then you’ll notice it start to get soft and sticky on the edges. THAT is what you’re looking for. Again, the pineapple will cook a little further when it’s on the pizza, so don’t over do it here. Remove the pineapple from the heat. 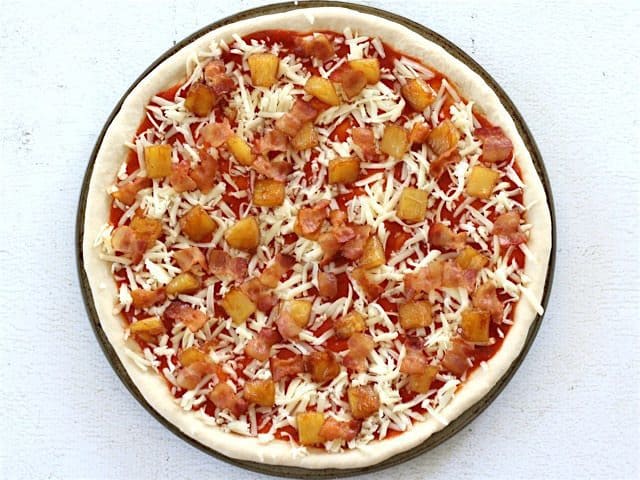 Begin to preheat the oven to 450ºF. Stretch one large pizza dough out to fit a 14 inch pizza pan (I used this dough recipe, but let it rise for 30 minutes to give it a fluffy rather than thin-crispy texture). Spread about 1/2 cup of pizza sauce over the dough, then sprinkle 4oz. of shredded Monterrey jack cheese on top. 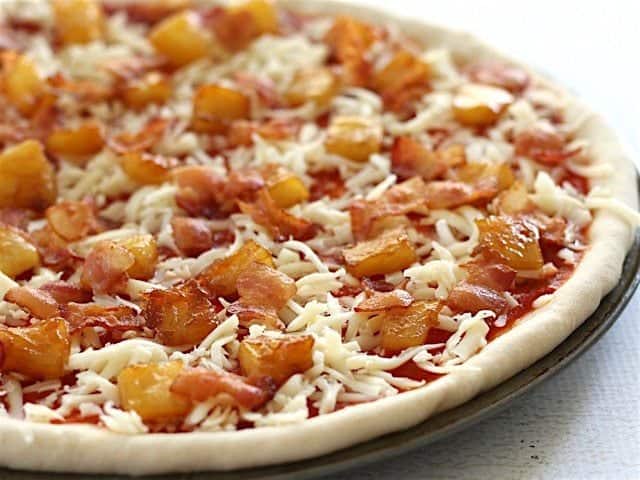 Then add your cooked bacon and caramelized pineapple. YUM.

Bake the pizza in the fully preheated oven for 15 minutes, or until the crust is golden brown and the cheese is melted and bubbly (the actual cook time will depend on the type of crust and sauce used). When the pizza comes out of the oven, top it off with a couple of sliced green onions. 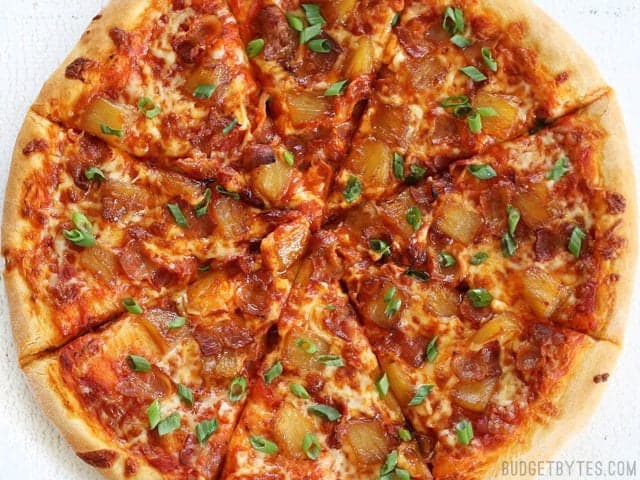