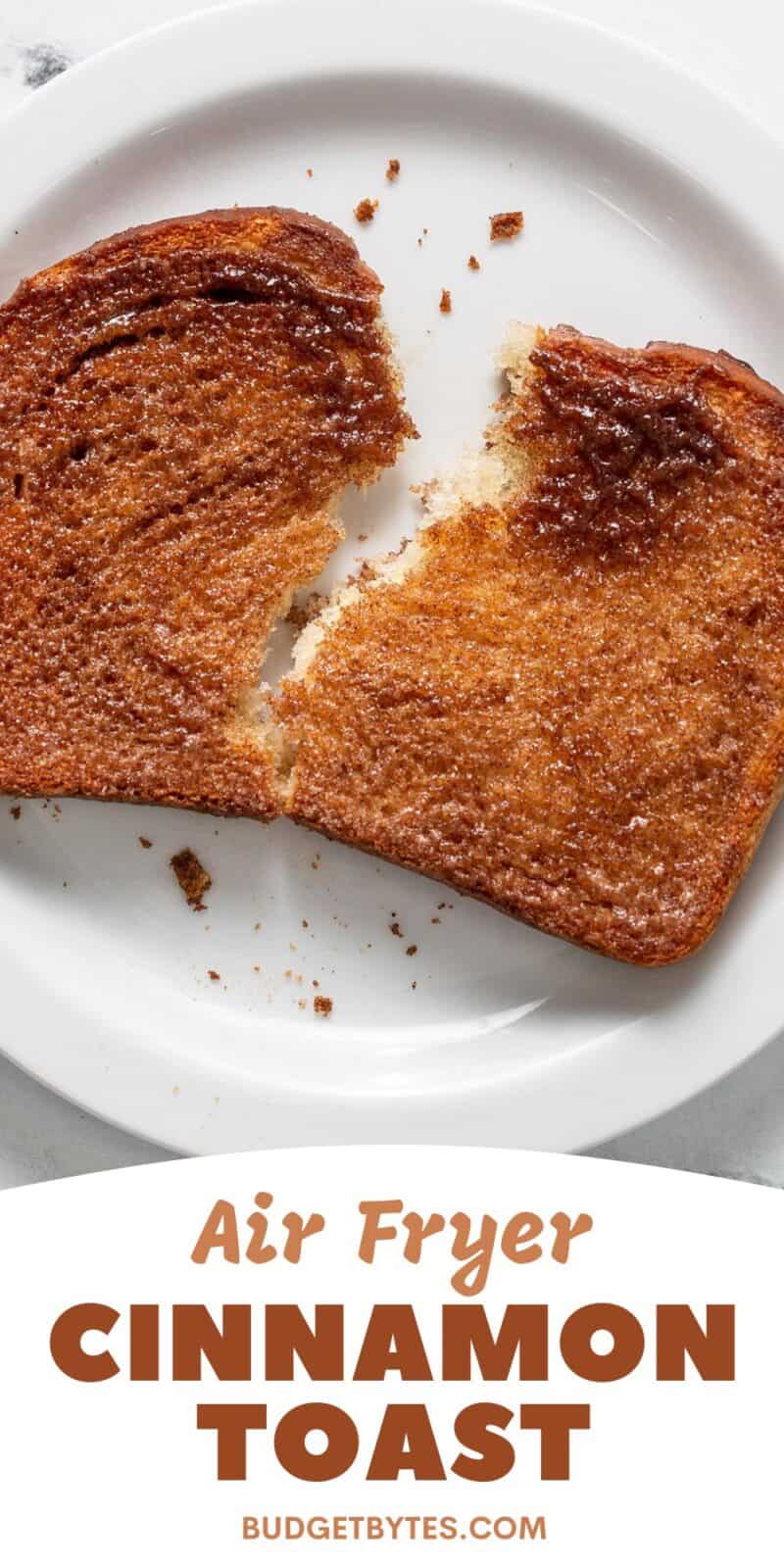 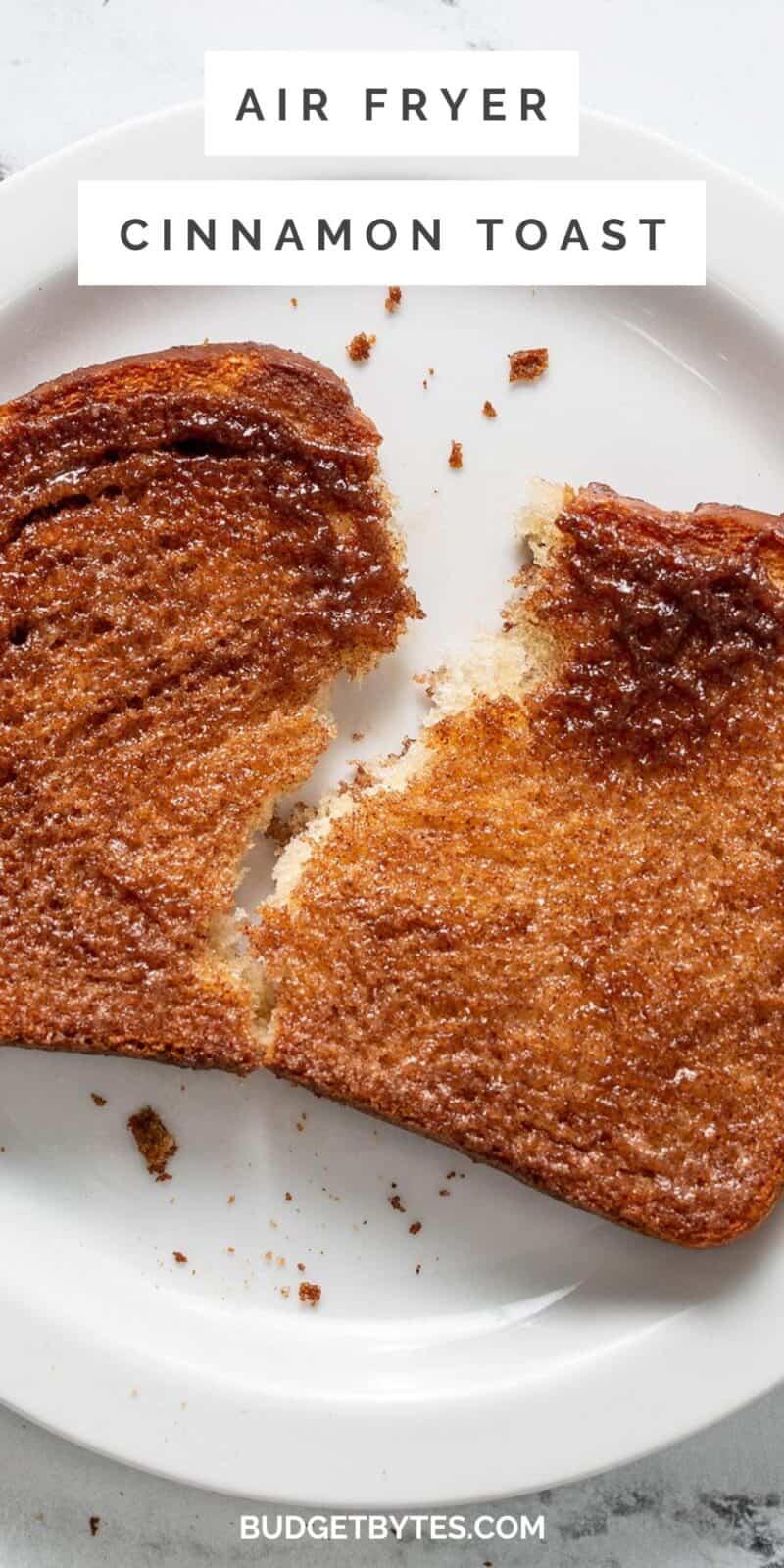 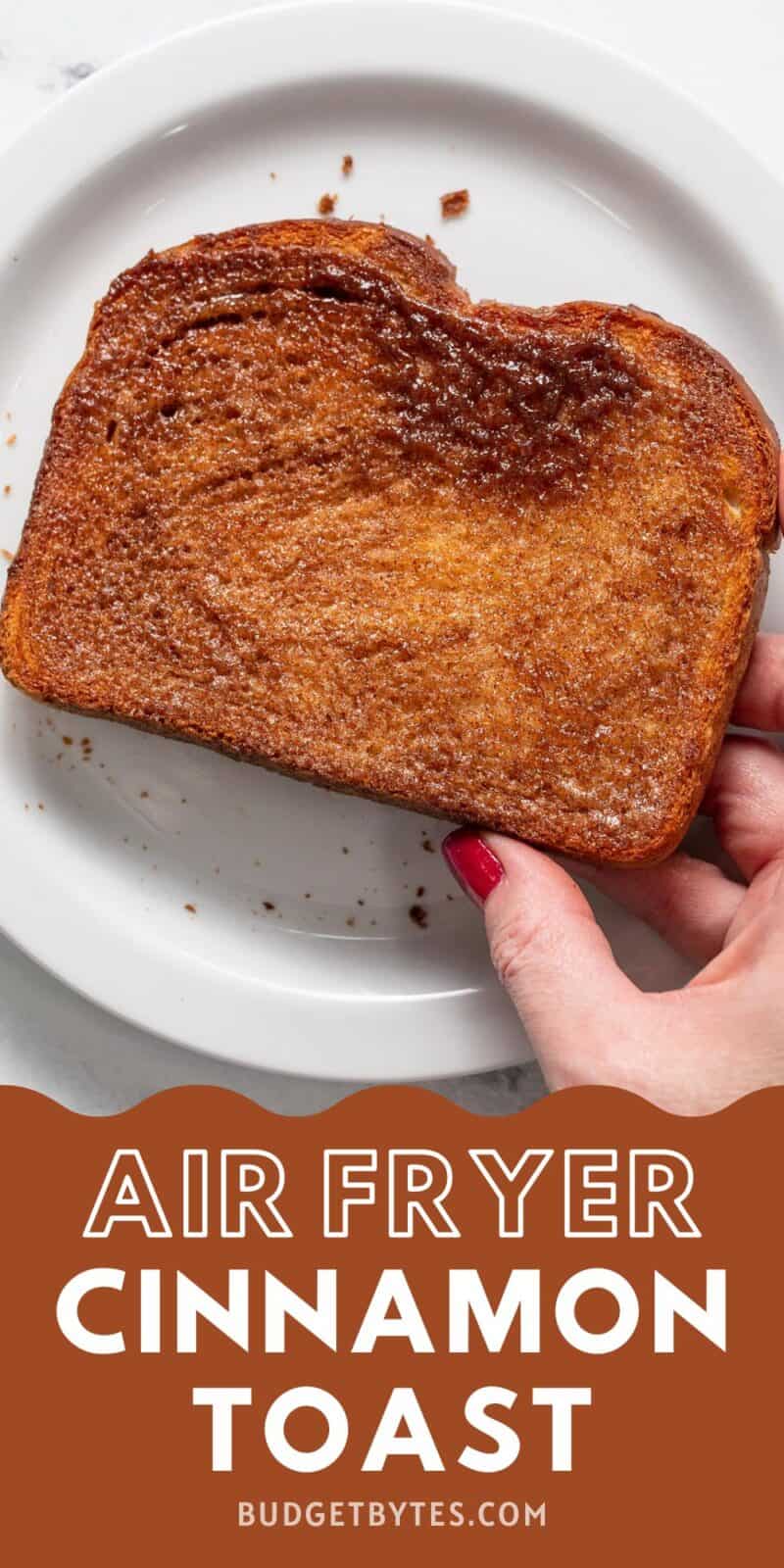 Why yes, you can make cinnamon toast in an air-fryer, and I’ve got the easiest recipe for you! Just five ingredients and a few minutes are all that separate you from the most decadent, buttery, cinnamon dream bite ever. (Yes, I categorize bites. And on a scale of 1 to 10, this one’s an 11.) I will warn you now, once you start making air-fryer cinnamon toast, it’ll be hard to start your day with anything else.

What is cinnamon toast?

Here’s a little fun history for you: cinnamon toast has been around for almost 600 years. It started as a budget-friendly alternative to french toast in Europe and that’s why we still love it today. Cinnamon toast is so loved that it even spawned a cereal (Cinnamon Toast Crunch), and if you’re a fan of that, you will LOVE this recipe.

What is Cinnamon Toast Made Of?

Cinnamon toast is made with just four ingredients: bread, butter, sugar, and cinnamon. But the combination is so good that they transformed into a supergroup, like the Beatles. (If you don’t know who the Beatles are, please don’t tell me, because I will cry.)

Through rigorous testing (I love my job), I’ve discovered that the trick to cinnamon toast perfection is making sweetened cinnamon butter with a few drops of vanilla. The vanilla is optional, but it gives the toast a little something extra. (PS I am not claiming to have invented cinnamon butter. Just that I ate way too many pieces of cinnamon toast while testing this recipe and the one with vanilla was my fave. Ok? Don’t come for me.)

Can’t I just use my toaster?

What you’re looking for in a perfect bite of cinnamon toast is a thunderous crunch that gives way to a buttery, gooey center. Unfortunately, you cannot achieve this heightened level of yum by simply toasting your bread, buttering it, and sprinkling it with cinnamon and sugar. You’ll only have flavor on the top of your toast, not throughout, and while it will be good, it won’t be BEYOND. And don’t we all need a little BEYOND in our lives?

Why make cinnamon toast in an air fryer?

When you pop the buttered toast into your air fryer, hot air circulates all over it. This not only browns your butter, giving you hints of hazelnut, but it also blooms the cinnamon, releasing citrusy notes. The butter melts into every nook and cranny of that piece of toast, which soaks it up like a sponge. The results? THE MOST AMAZING crispy outer layer, giving way to a decadent, buttery center. BRB. I’m going to make a slice while you check out the recipe.

5 from 3 votes
Make the crunchiest cinnamon toast ever with the help of an air fryer. You'll have a buttery decadent breakfast in minutes, and for pennies! This one's a keeper.
Author: Monti – Budget Bytes 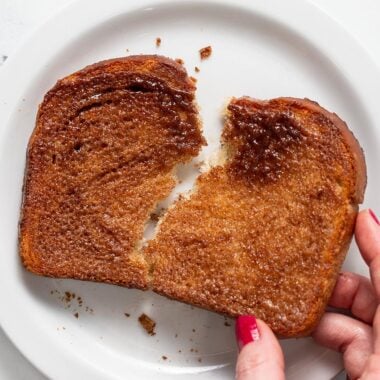 Mix until incorporated. The butter should look whipped.

Spread half of the butter on one side of the slice of bread. Make sure to cover the slice from corner to corner.

Take the toast out of the air fryer and spread the remaining butter on the other side, again corner to corner.

Try These Other Sweet Breakfast Ideas

Monti CarloMonti Carlo is a Puerto Rican food TV personality, food writer, and special events chef. Catch our Senior Food Editor doing her best not to talk with her mouth full on Good Morning America, The Today Show, Netflix, Food Network, Cooking Channel, and PBS. Her first full-length cookbook, Spanglish, will be published in Fall '24 by Simon and Schuster's Simon Element.More About Monti