It’s that time again. Oh how the week flies! It was a super busy week this week, and I mean SUPER busy. The kind of busy where you don’t even stop to think, “What should I eat?” Luckily, that part is kind of my job. ;) 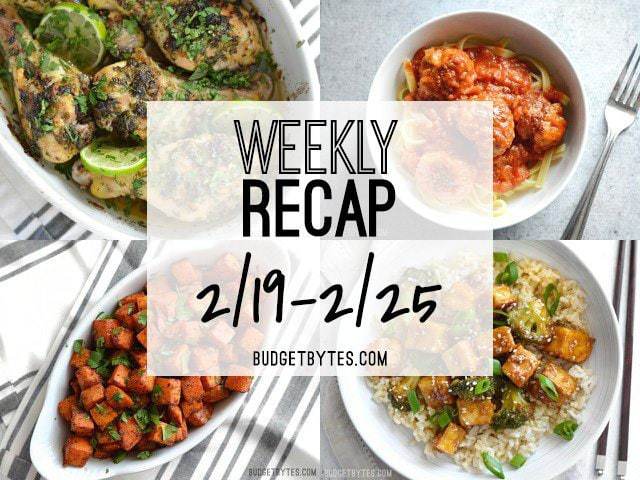 I had four recipes planned for this week, Cilantro Lime Chicken Drumsticks, Chili Roasted Sweet Potatoes, Sesame Tofu with Broccoli, and some sort of pesto pasta… but I never got around to making the pasta. It was just that kind of week! But now I have a jar of pesto in my pantry that I can play around with in the future, so that’s not so bad. But anyway, let’s jump right in!

I used a lot of ingredients that I already had on hand this week, so my grocery list was surprisingly short: 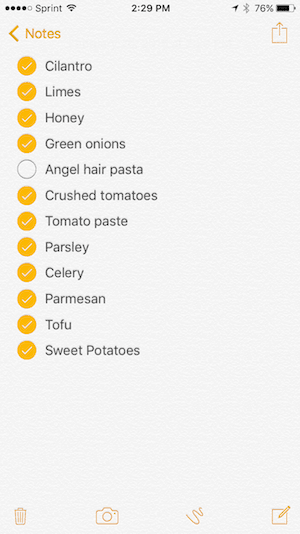 Because I had bought a family pack of chicken drumsticks the week before, all I needed for the chicken recipe was the cilantro and limes. I bought honey because I wasn’t sure if I was going to add it to the marinade or not, but I didn’t end up using it.

Crushed tomatoes, tomato paste, and parsley were all for the pasta dish that I didn’t get to, but luckily the canned tomato goods will last until I get another chance to use them. While I was at the store I decided not to buy angel hair pasta and just use the leftover fettuccini that I had in the pantry instead.

I put celery on the list because I have a few chicken carcasses in the freezer that I need to make stock out of. I already have some carrots from the week before, so I figured this would be a good time to make the stock. I also used some of the carrots and celery to snack on with hummus this week. (I thought of that while I was at the store, so I picked up some chickpeas, even though they weren’t on the list.)

Green onions and tofu were for the Sesame Tofu recipe, and I already had frozen broccoli, rice, and everything needed to make the sauce on hand. #win

Somehow I didn’t need any pantry staples this week. Oh, no, I lied. I needed tortillas, but forgot to put them on my list and therefor forgot to buy them. Me without tortillas is a scary thing, but I decided to challenge myself to go a week without them. Having no tortillas meant that I had nothing to eat my eggs with, so that ended up unintentionally slowing my egg consumption. Not a bad deal, since if I eat eggs unchecked, I’ll eat a whole dozen in a week. It’s a dangerous situation. 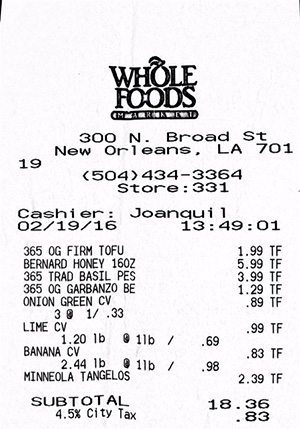 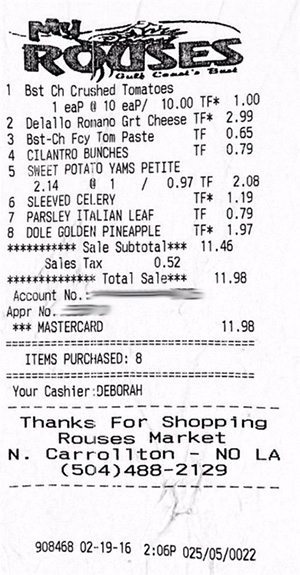 When I walked into Whole Foods I saw these adorable tangelos on sale for $0.98/lb and had to get some. They’re pretty good, but fairly tart, so I still have a few left over. I also got bananas to go in my oatmeal, and a pineapple because I LOVE pineapple and they were only $1.97!! Lots of fruit this week.

When I went to get the Parmesan that was on my list, I saw a sale sign for DeLallo that said $2.99, so I grabbed that… Not realizing until I got home that it was actually Romano rather than Parmesan. Oops. Either way, it will still be great on pasta, so I’m not mad. :P

This weeks grocery run was again closer to $30 than my $40 goal, but I probably ate 90% of the food this week. Boyfriend was working really long hours and ate most of his meals away from home. So, the $31 is probably right on target. 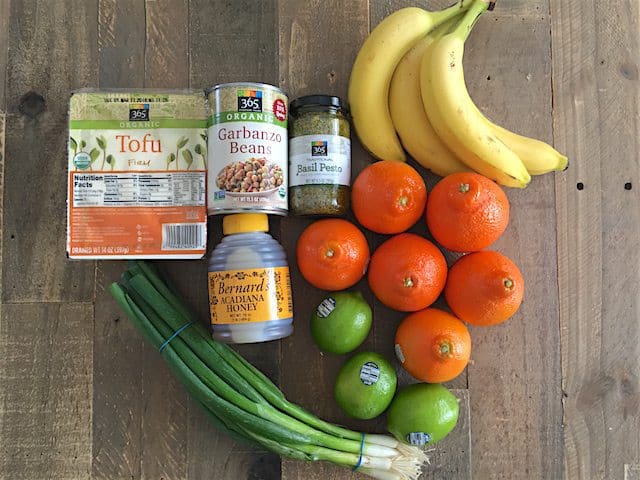 That’s so little food! But, like I said, I used a lot of ingredients that I had on hand this week. My freezer is finally starting to look a little less full. :) 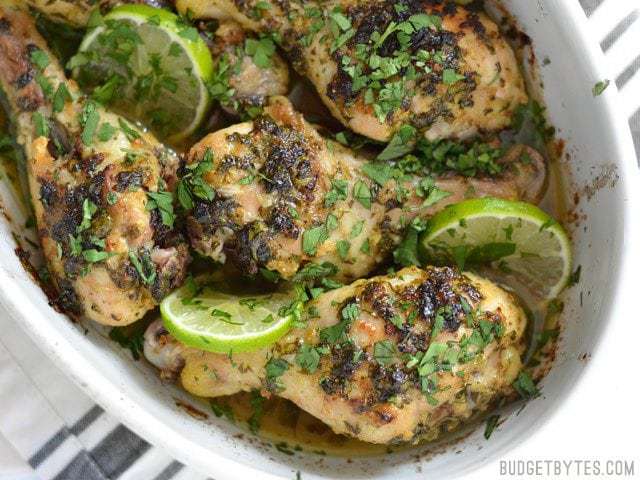 These Cilantro Lime Chicken Drumsticks were my first project this week. Oh my were they good! I love that tangy garlicky-lime flavor. And you know how I love my cilantro. ;) I had a pack of 16 drumsticks, but I only used half for this recipe because I don’t like to freeze leftovers of cooked bone-in meat. I find it difficult to reheat without drying it out. 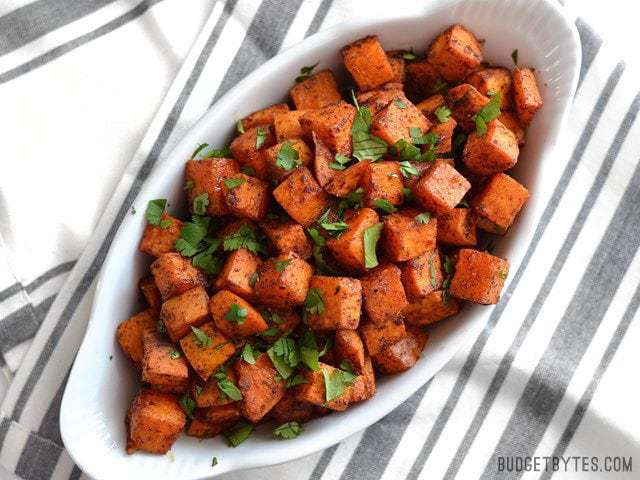 Chili Roasted Sweet Potatoes made the PERFECT side dish to the Cilantro Lime Chicken. They both cooked in the oven at the same time and the flavors and colors were beautifully complimentary. I served everything over a bed of rice. 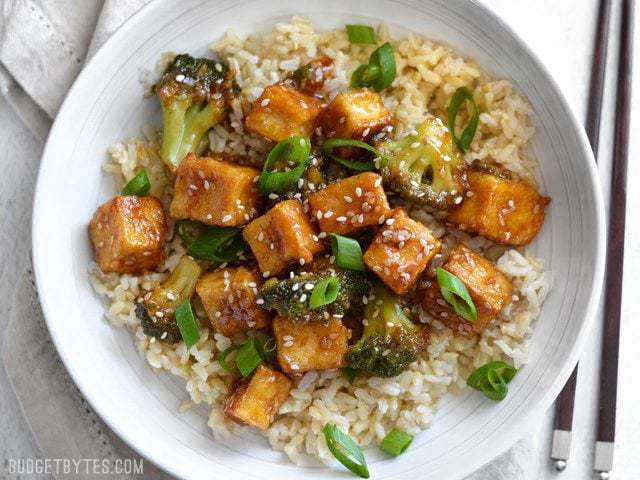 Next, I decided to experiment with some tofu. I’m so glad this Pan Fried Sesame Tofu with Broccoli was such a success. I was really worried that I’d have another tofu failure, but this stuff was SO GOOD. I’m making more tofu this week because I liked it so much (a different flavor, though). Plus, most of these ingredients I keep on hand, so it’s a great last minute meal. 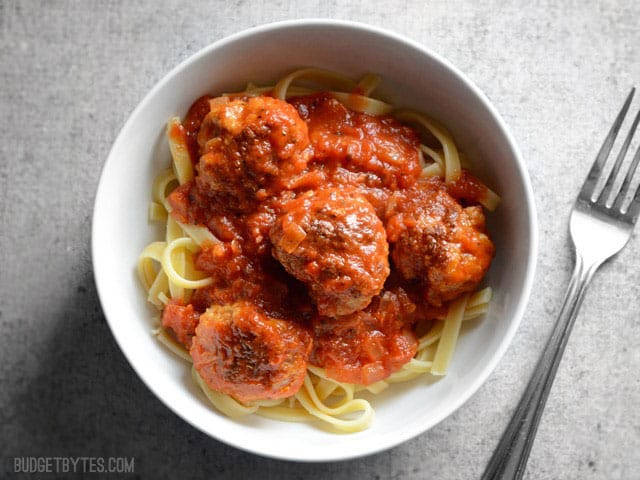 On one of those super-duper busy nights, I reached into my freezer and pulled out the bag of frozen Skillet Meatballs that I had waiting for just such an emergency. I had also kept a jar of pasta sauce in my pantry because I knew I’d need it when I finally decided to cook up those meatballs. Fast, easy, and very satisfying. :) 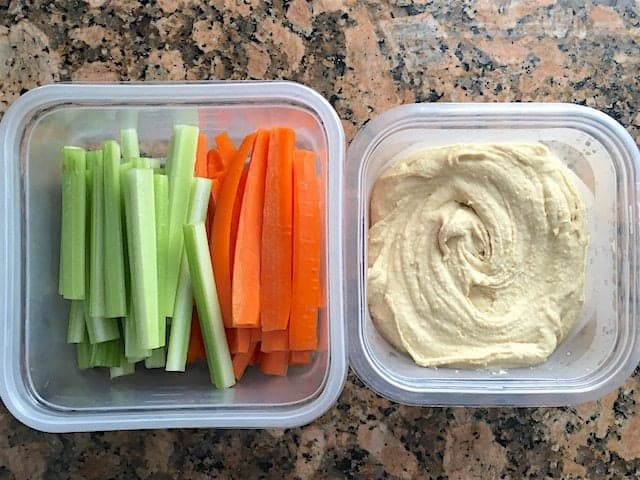 To make sure I had some snacky-snacks in the fridge, I whipped up a batch of hummus and cut up some carrots and celery. I ended up winging the hummus, but I used this basic hummus recipe as my guide. I also tried a couple tips that people have mentioned over the years: boiling the canned chickpeas for about 10 minutes to make them extra soft, and removing the skins. The hummus was ultra smooth, but taking the skins off seemed to reduce the volume quite a bit and I felt like I was probably just removing a lot of the fiber. It was good to try, but I probably won’t use either technique regularly.

Breakfast was oatmeal just about every morning, except that one day when I ate the leftover pasta and meatballs. LOL

We were actually so busy this week that we didn’t eat out one single time. Crazy! Time flew so fast that I didn’t notice, though. :)

There were a lot of things I didn’t get to this week, including the pasta dish and making my chicken stock. But as my days filled up, I made sure that the non-time-sensitive tasks got pushed to the back. The pasta dish used ingredients that were almost all shelf stable, which means I could make it at any point in the future. The chicken carcasses are safely frozen, so the stock could be postponed as well. The celery and carrots used to make the stock are obviously perishable, but they’ll stay good a week or maybe a little more, so I knew I could wait until this week if I had to. I had already started to thaw the chicken for the Cilantro Lime Chicken, so I absolutely HAD to make that.

It’s funny how often the thought of ingredients going bad motivates me to get off my bum and into the kitchen. I have a tendency to say, “Oh, I can do that tomorrow, I’ll just eat a spoon of peanut butter for dinner…” but if I see that the cilantro is starting to get a little wilted or I’m afraid my fresh meat will go bad, I’ll feel all guilty and finally get up and go. :P Funny how different things motivate different people, huh?