Tacos are one of my favorite summer quick dinner fixes. They don’t have to be complicated and they’re not too heavy. Fresh toppings keep the meal light and summery, and allow for personalization. And while tacos are usually meat-centric, these Sweet Potato Tacos are a great example that you can make a great taco even without meat! 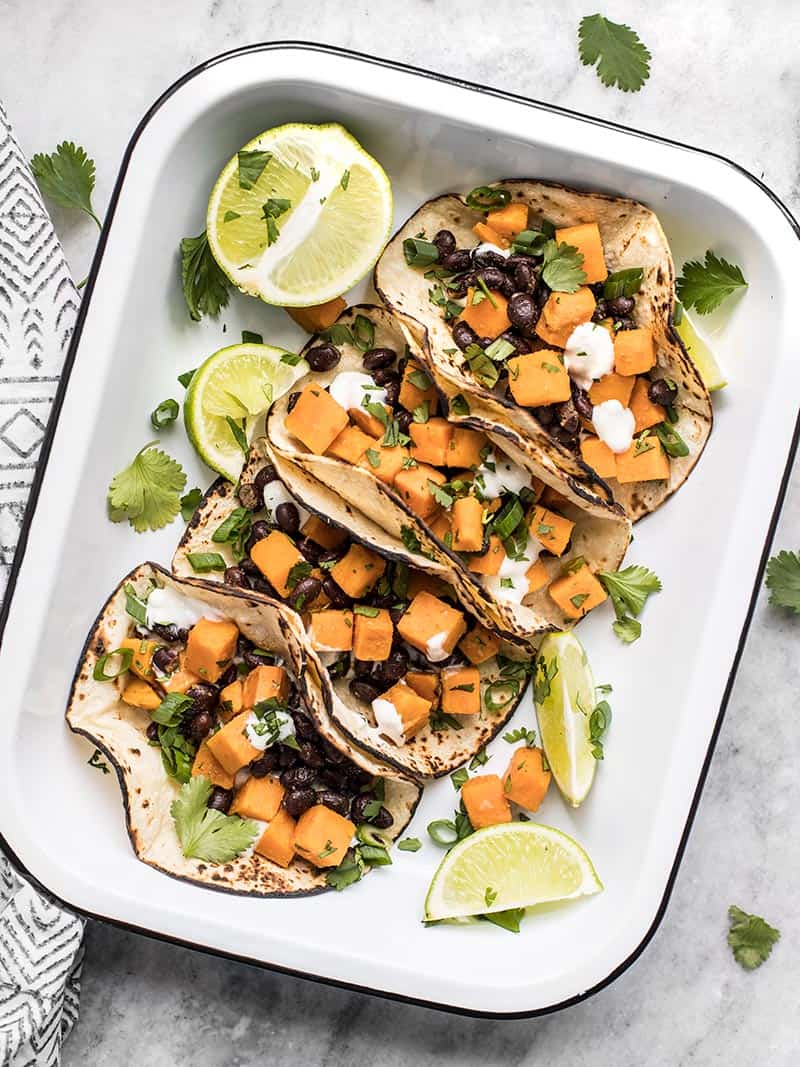 What’s in a Sweet Potato Taco?

To fill these Sweet Potato Tacos I made a quick sweet potato and black bean hash, then topped the tacos with an insanely light and fresh lime crema. Okay, so it’s not actually Mexican crema, but it’s a lime flavored sour cream that you can substitute for real crema if your grocery store doesn’t carry a large selection of Hispanic ingredients. At any rate, the lime crema is what really makes these Sweet Potato Tacos special and I found it so irresistible that I had a hard time not licking it off the spoon. It’s so goooood.

What Kind of Tortillas Should I Use?

Traditionally, tacos are made with corn tortillas, but this recipe is flexible and you can use flour tortillas if that’s what you prefer. Either way, toasting the tortillas a little beforehand really amplifies their flavor and adds a lot to the taco!

What Else Can I Add to the Tacos?

Want to get extra fancy? Try adding some thinly sliced jalapeños, avocados, or pickled red onions to the top of these Sweet Potato Tacos!

What to Serve with Sweet Potato Tacos

I served these Sweet Potato Tacos with Cilantro Lime Rice and some fresh Pico de Gallo, which you can either serve on the side or add to the taco itself. Cilantro Lime Coleslaw would also make an awesome side dish for these tacos! 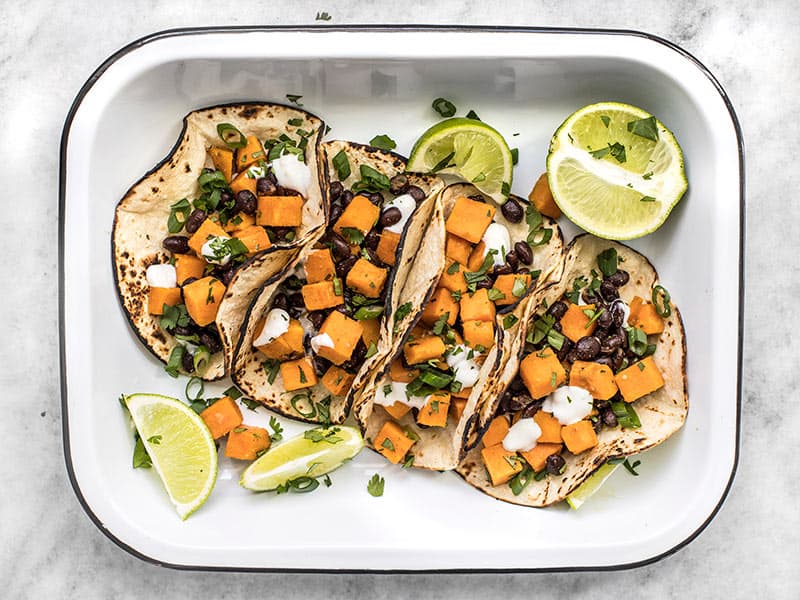 4.89 from 34 votes
These light and refreshing Sweet Potato Tacos are filled with a simple sweet potato and black bean hash, and topped with a tangy lime crema. 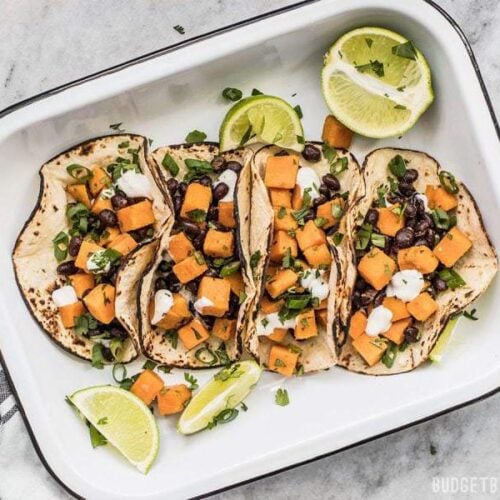 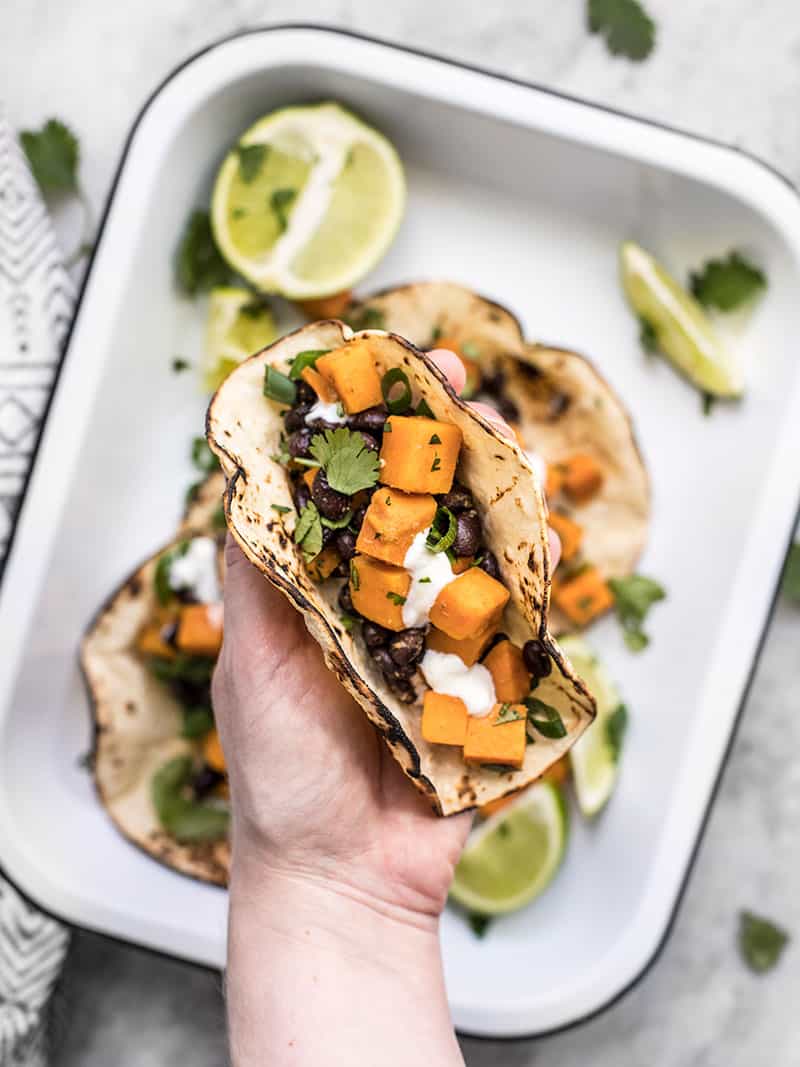 How to Make Sweet Potato Tacos – Step by Step Photos 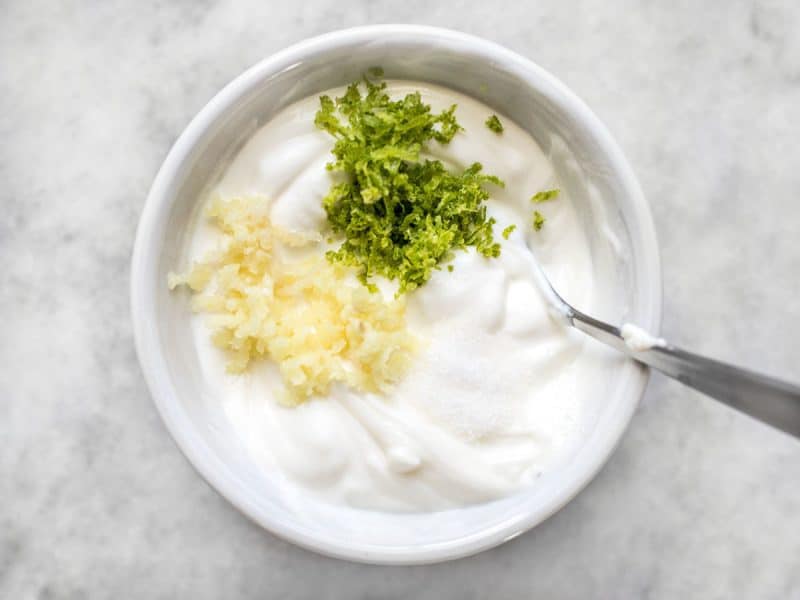 Make the lime crema first so the flavors have time to blend. Mince one clove of garlic and use a zester or a small holed cheese grater to remove the thin layer of green zest from the lime. Add 1 tsp of the zest and about 1 tsp of the lime juice to the sour cream, along with the minced garlic and 1/4 tsp salt. Stir the ingredients to combine, then refrigerate the crema until you’re ready to use it. 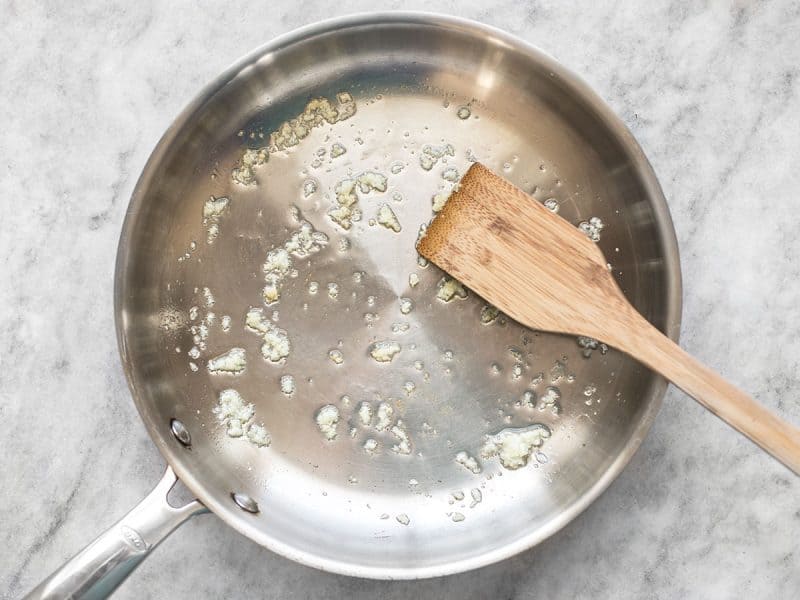 Heat a large skillet over medium flame, then add 1 Tbsp olive oil and 2 cloves of minced garlic. Sauté for one minute or just until the garlic becomes nice and fragrant. 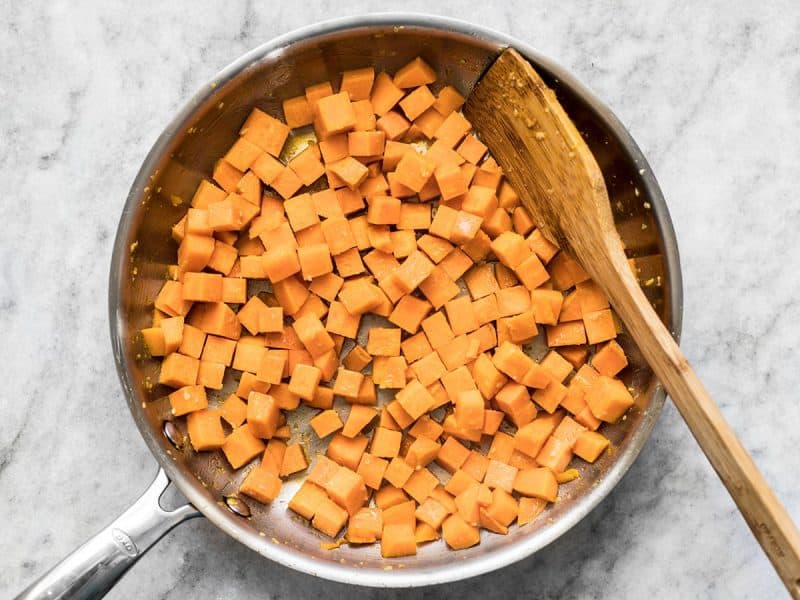 Peel and dice a sweet potato (about 1.25 lbs.) into small 1/4-1/2″ cubes. You want the cubes to be very small so they cook quickly. Add them to the skillet, along with a couple tablespoons of water to generate steam. Sauté the sweet potatoes until they are soft. Add more water, if needed, if the skillet dries up. The steam will help soften the sweet potatoes. 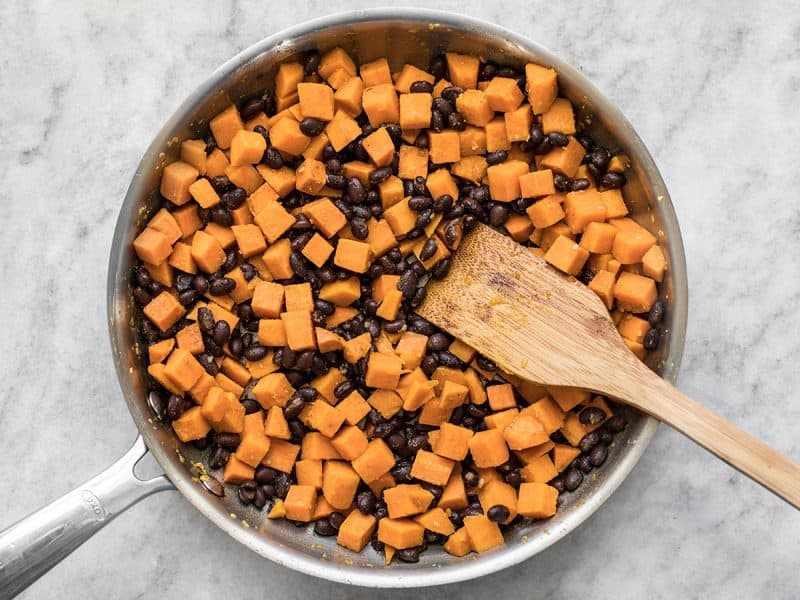 While the sweet potatoes are cooking, drain and rinse one 15oz. can of black beans. Once the potatoes are soft, add the black beans, 1 tsp of cumin, and salt and pepper to taste. Sauté the skillet for a few minutes more, or just until the beans are heated through. 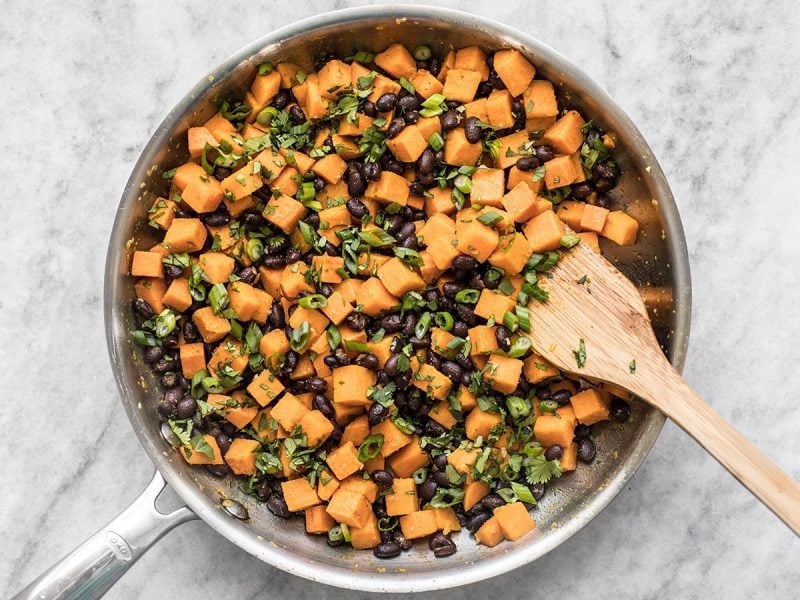 Slice two green onions and roughly chop 1/4 bunch of cilantro. Fold the green onions into the sweet potato has and sprinkle the cilantro on top, if desired. 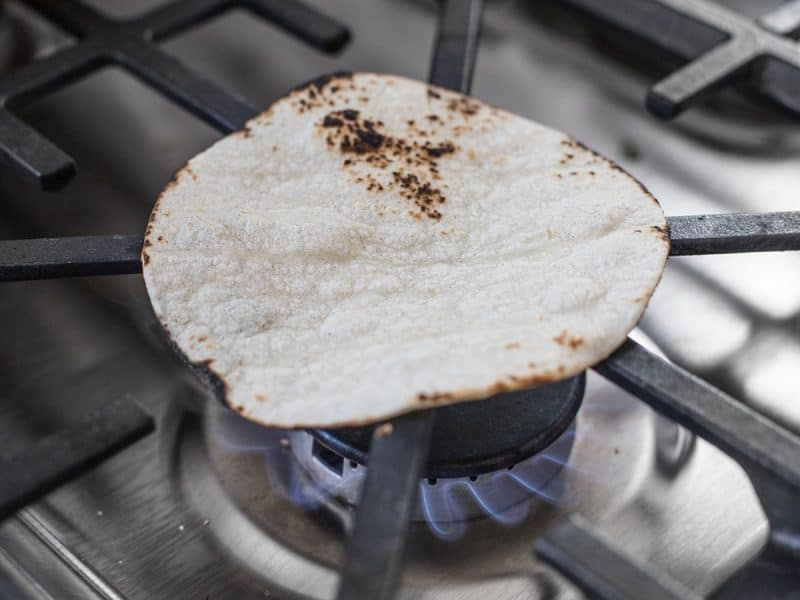 Whether you’re using flour or corn tortillas, I find that you get a lot more flavor and strength (to hold all those delicious fillings) if you toast the tortillas first. You can do this in a dry skillet, or over an open flame. Doing this over an open flame goes really fast and requires a lot of attention, so if you’re not comfortable you can just lay the tortillas in a skillet, one by one, until they get toasty on each side. The skillet is slower and there is less room for error, but they don’t get quite as blackened. 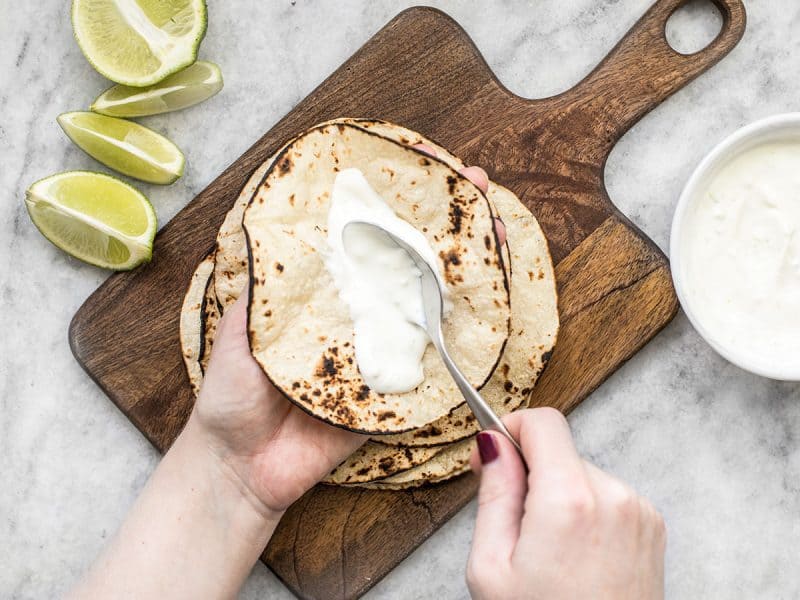 Once the tortillas are toasted, it’s time to build the Sweet Potato Tacos! Smear a little lime crema down the center of each tortilla. 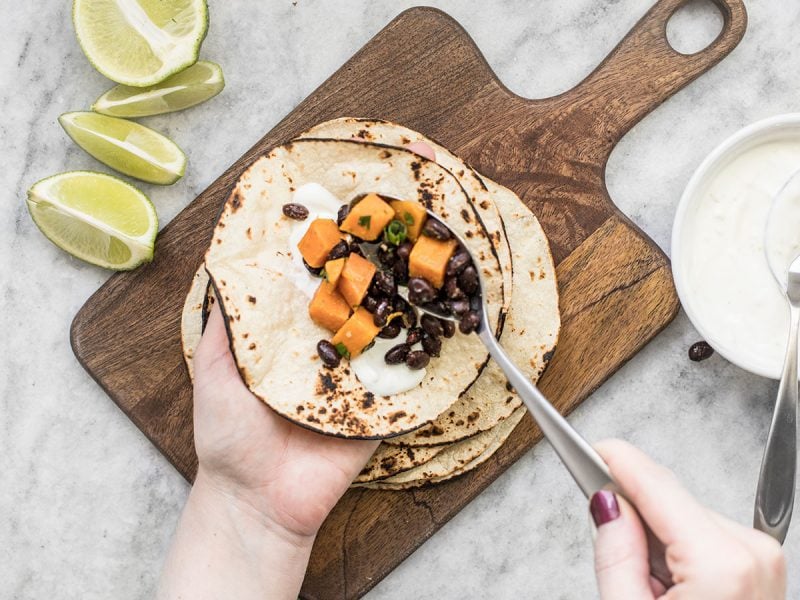 Add a little scoop of the sweet potato hash… 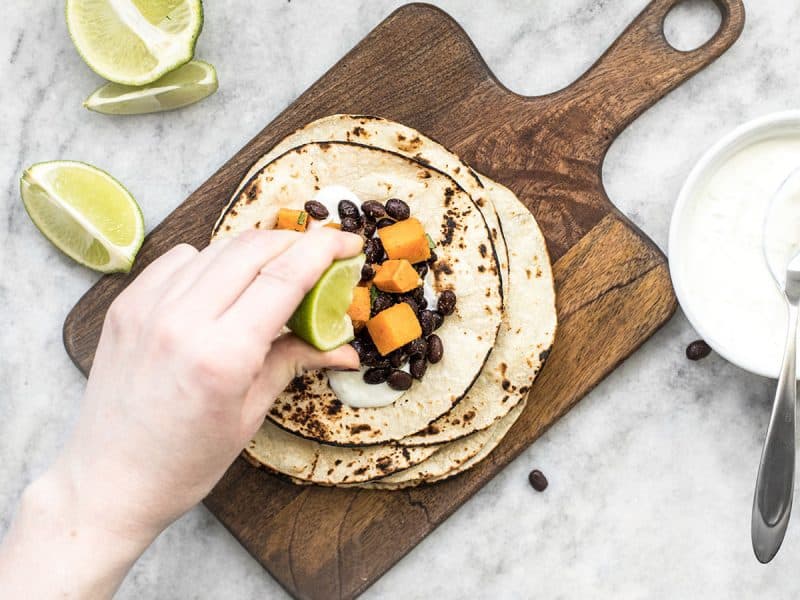 Add a squeeze of lime… 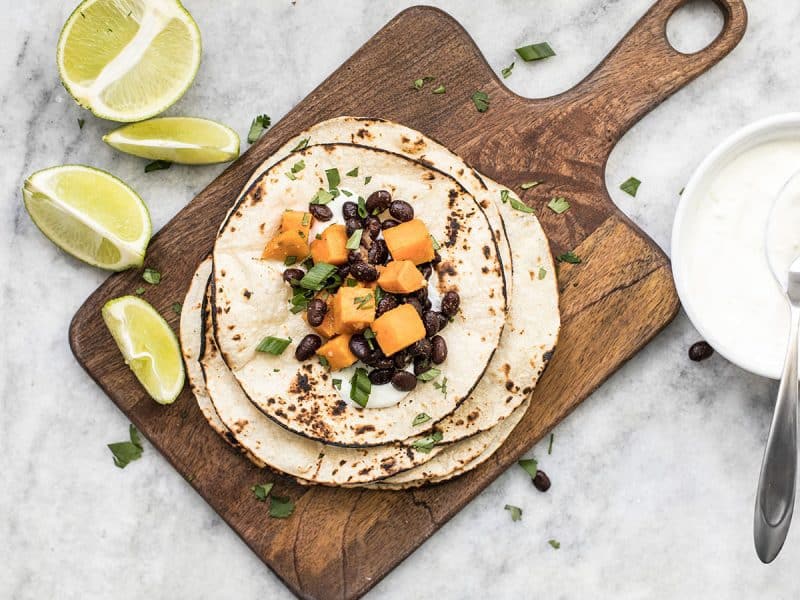 And finish with an extra little sprinkle of cilantro. And maybe more of that amazing lime crema, because it’s just that good. 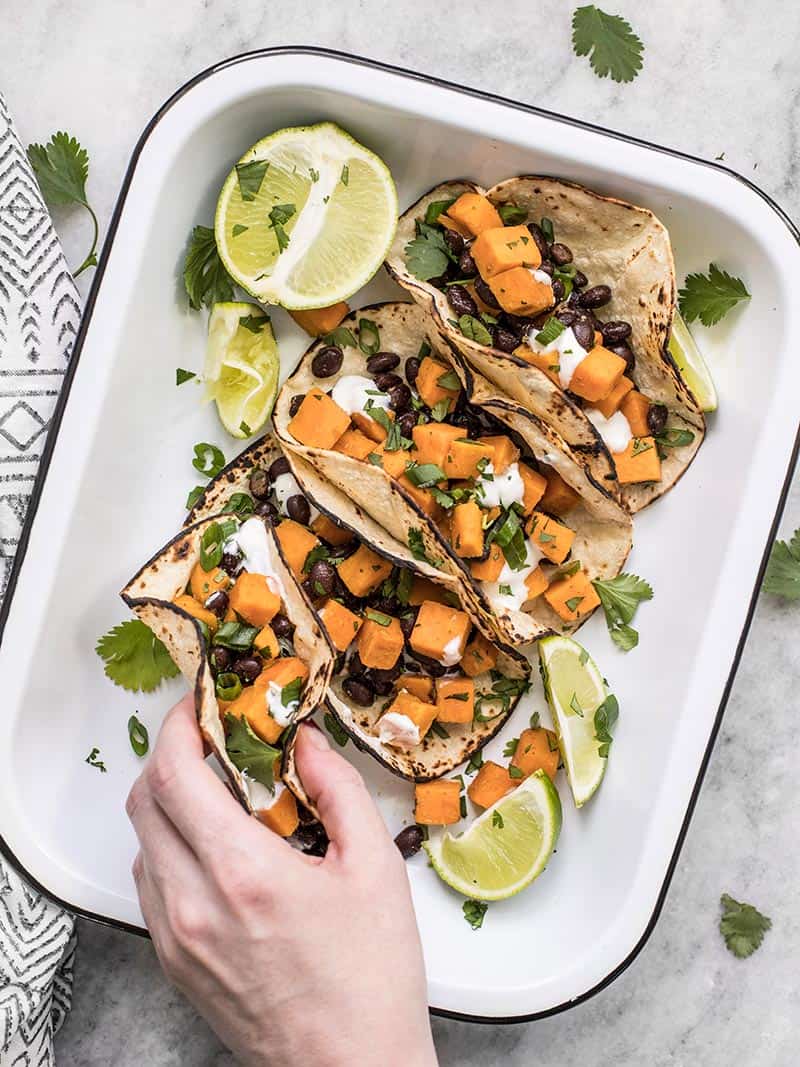 Excuse me while I just grab one of these…