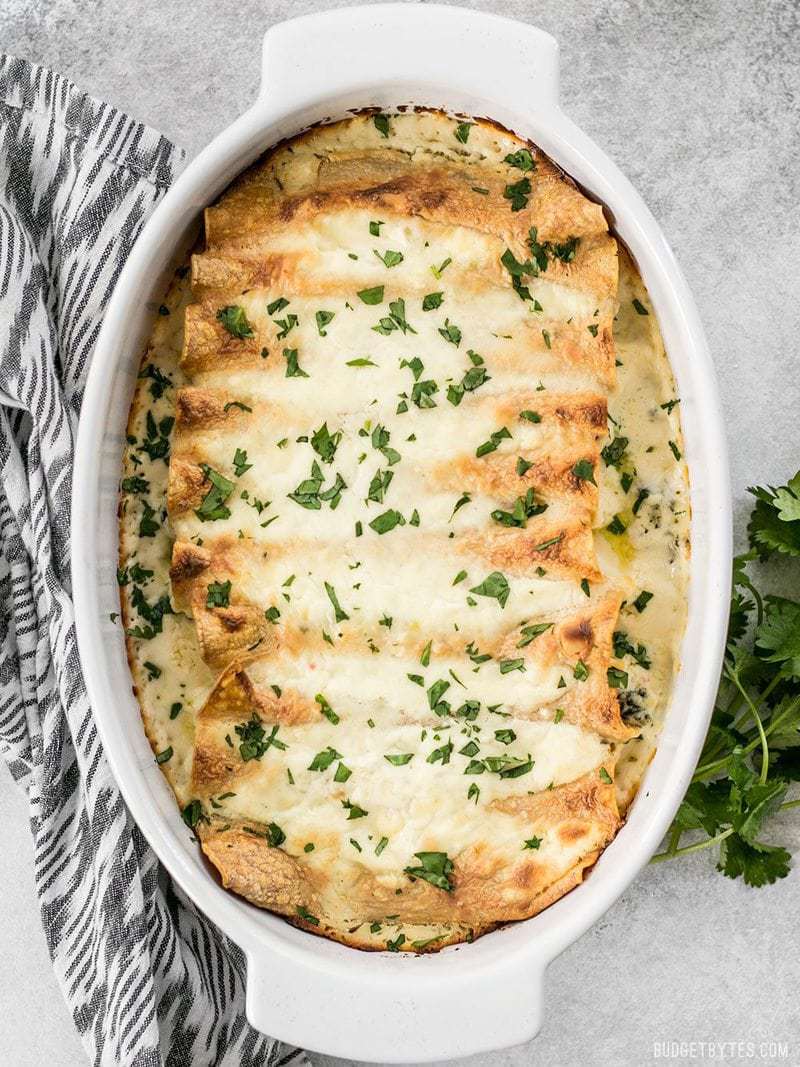 What Kind of Tortillas Should I Use?

Corn tortillas are best for enchiladas because they have a great toasty corn flavor, and hold up well to the sauce. To get the most flavor out of your corn tortillas, don’t forget to toast them first! This enhances the flavor and makes them a little stronger. You can toast the tortillas over an open flame, or in a dry skillet (see the step by step photos below the recipe).

The filling for these enchiladas is super simple, with just some chopped spinach, white beans, creamy pepper jack, salt, pepper, and cumin. But thanks to all those colorful flecks of crushed peppers in the pepper jack, they’re not lacking in flavor. If you prefer, you can add some chopped chicken to or in place of the white beans in this recipe.

Just to make sure these enchiladas were top notch, I drenched the them in a super rich pepper jack sauce. The sauce is creamy, cheesy, a little tangy, a little spicy, and a LOT delicious. I’m absolutely loving these creamy white enchiladas!

I topped my enchiladas with a handful of chopped cilantro, but if you don’t like cilantro, green onions also go well. If you happen to find avocados on sale, I think adding a few slices to the top of these enchiladas would be amazing.

What to Serve with Enchiladas 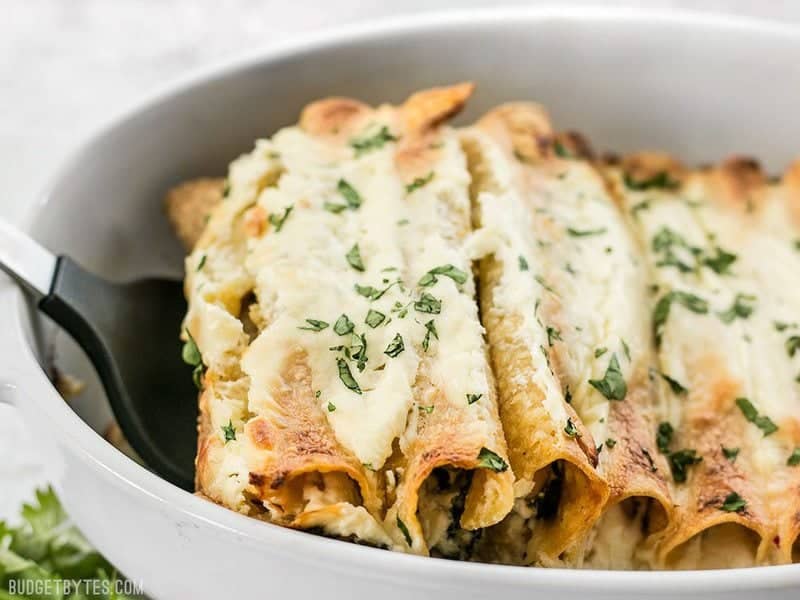 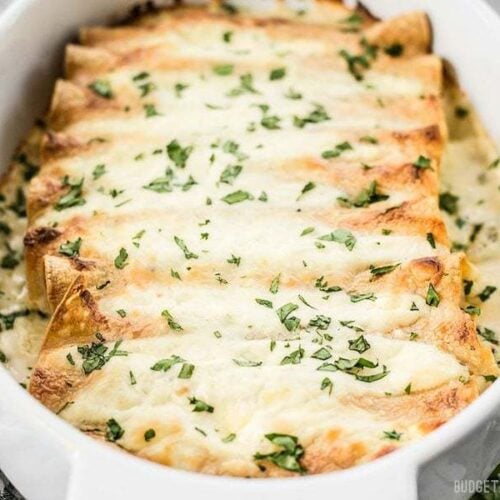 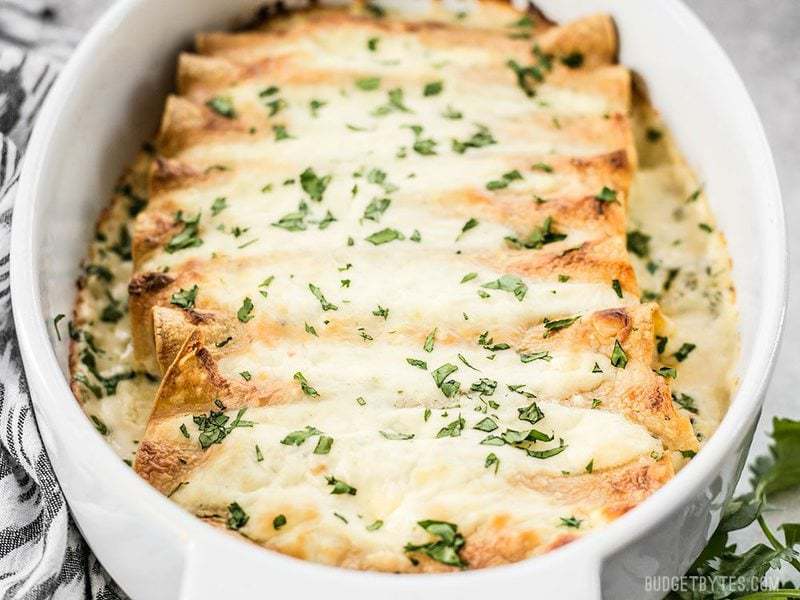 How to Make White Bean Enchiladas – Step by Step Photos 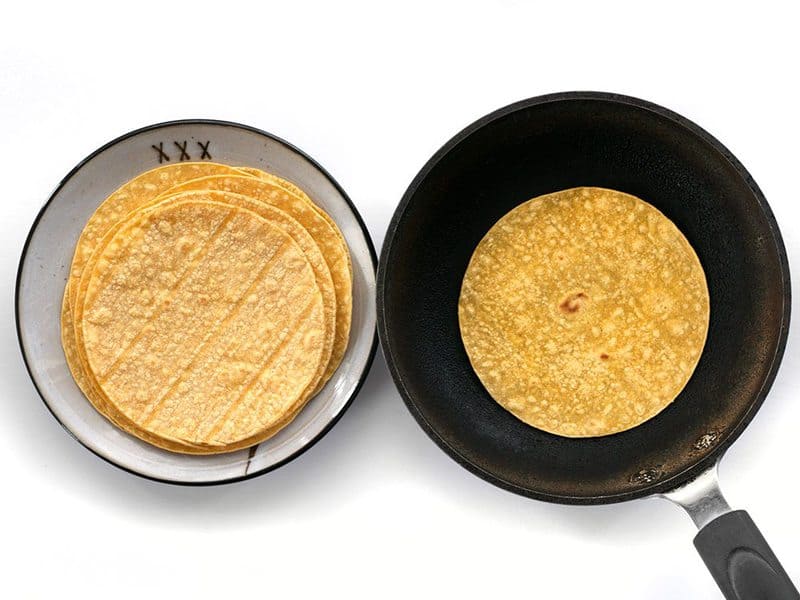 Begin by slightly toasting 12 6-inch corn tortillas in a dry skillet over medium-low heat. Toasting gives them a nuttier flavor and helps strengthen them a bit so they aren’t as likely to crack when rolled. You want to toast them just until they’re a little more stiff, but still pliable enough to roll. Stack them on a plate as they come out of the skillet and set them aside. 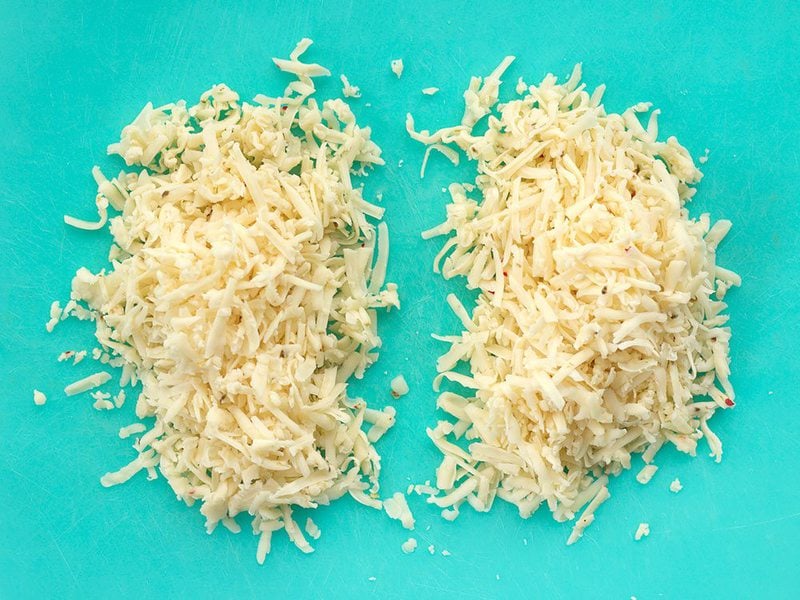 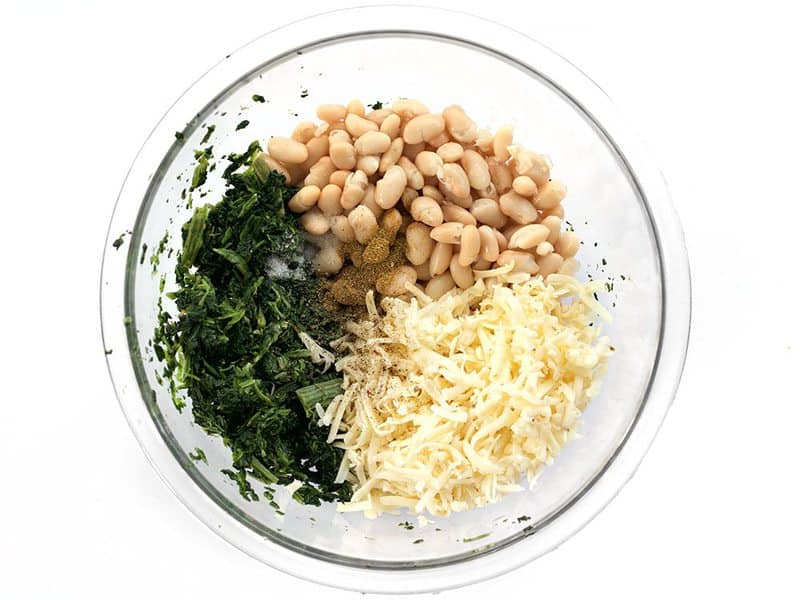 Thaw 1/2 lb. of frozen spinach (microwave or let sit at room temperature). I suggest getting “cut spinach” or “chopped spinach” so that you don’t have long strings of spinach leaves in your enchiladas. Once thawed, squeeze out as much water as possible from the spinach and place it in a large bowl. Rinse and drain one 15oz. can white beans and add them to the bowl along with 4oz. of the shredded cheese, 1/4 tsp garlic powder, 1/2 tsp cumin, 1/4 tsp salt, and some freshly cracked pepper. 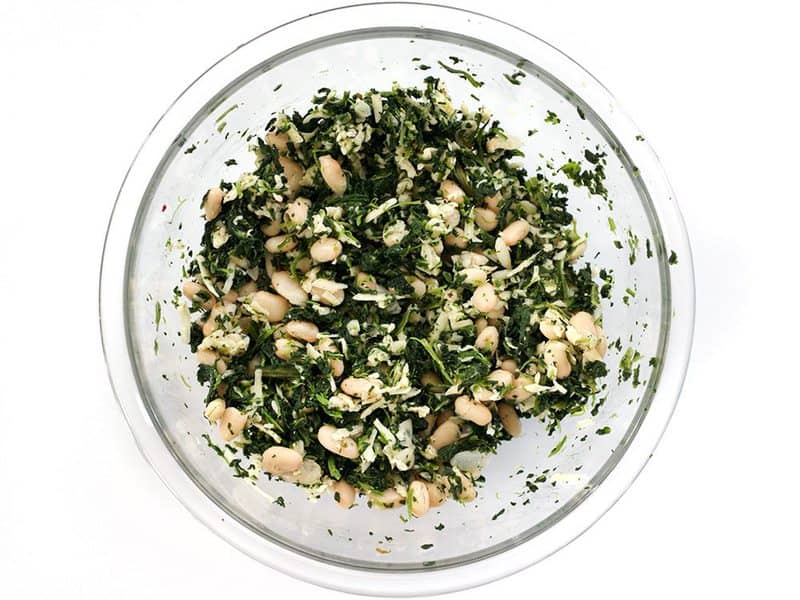 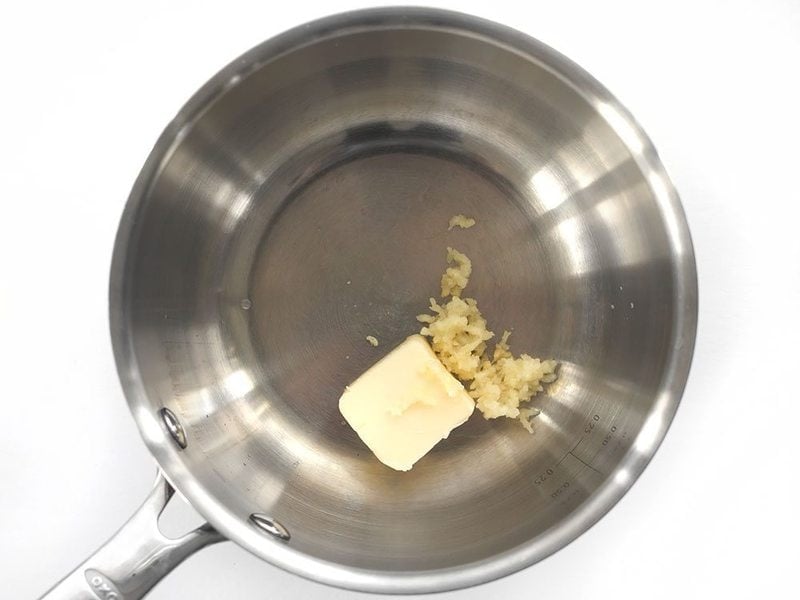 Begin preheating the oven to 350ºF. To start the pepper jack sauce, add 1 Tbsp butter and one minced clove of garlic to a small sauce pot. Sauté the garlic in the butter over medium heat for one minute to soften it up. 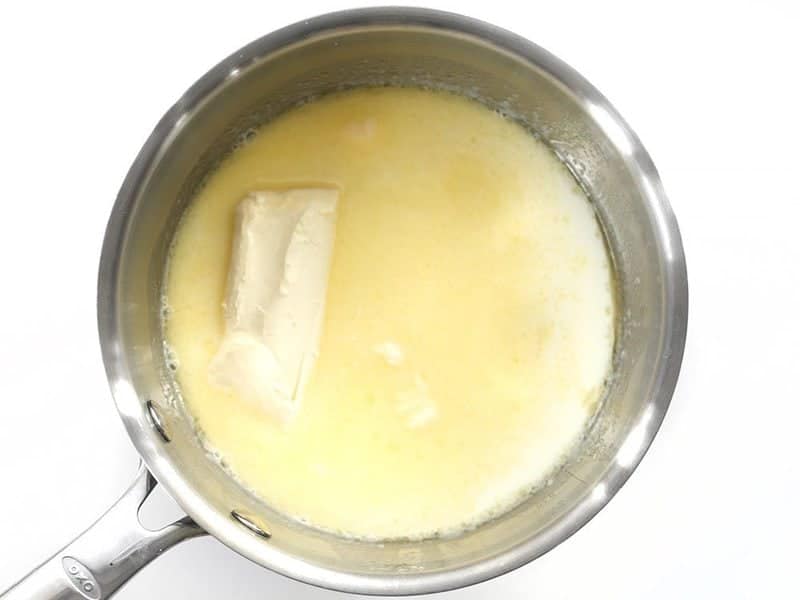 Add 3/4 cup whole milk and 4oz. cream cheese to the pot. Stir or whisk until the cream cheese melts into the milk and thickens it slightly. Stir in 1/4 tsp salt. 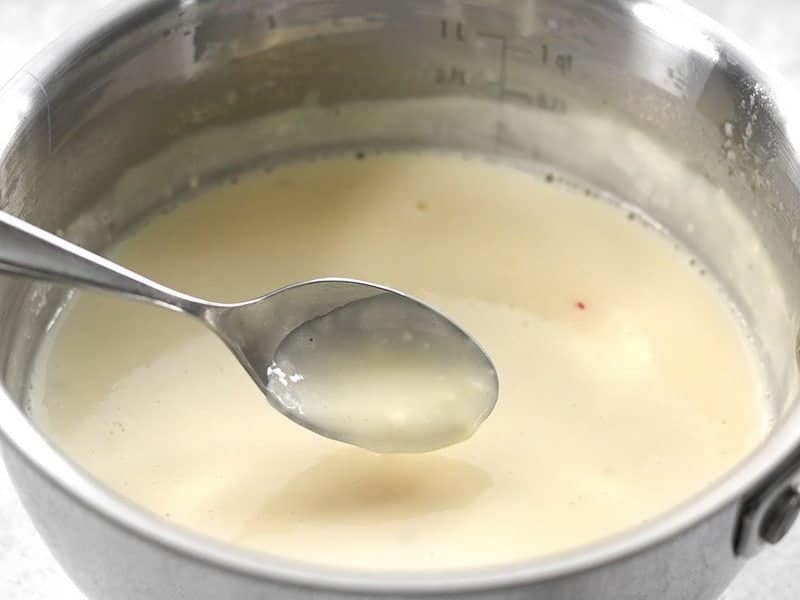 Once the cream cheese has melted in, begin adding the remaining 4oz. of shredded pepper jack, one handful at a time. Whisk in each handful until it is fully melted before adding more. Once all the cheese has been incorporated into the sauce, turn the heat off and let the sauce cool slightly while you assemble the enchiladas. 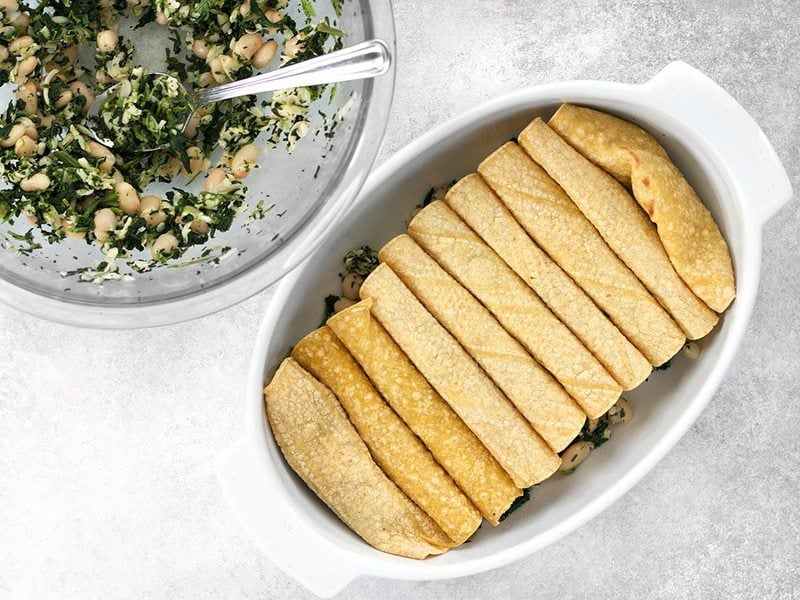 Begin filling the tortillas with the spinach and white bean mixture, rolling them up, and then placing them in a casserole dish coated with non-stick spray. I had enough filling for 12 enchiladas, but I chose a dish that was slightly too small, so I only made 10 (if you have leftover filling, you can make quick quesadillas with it in a skillet!). Make sure your enchiladas are in the dish with the seams facing down and that they fit snuggly together. 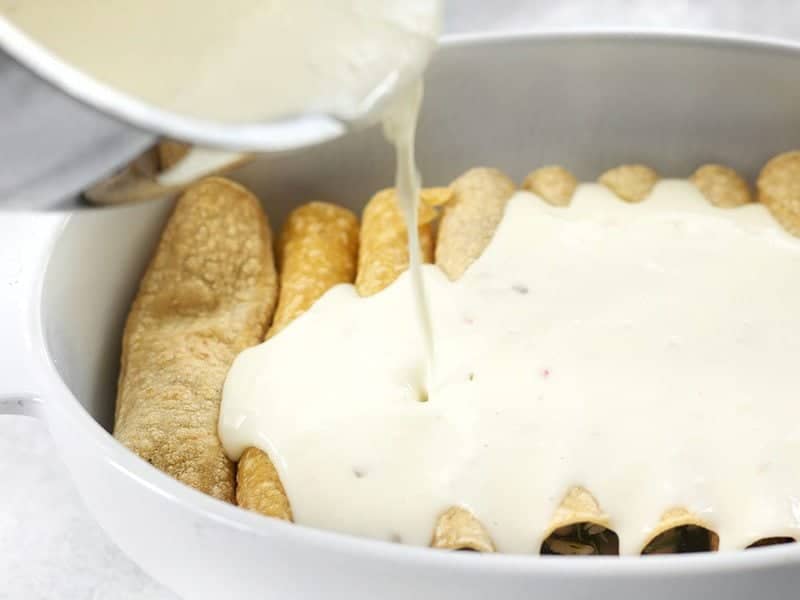 Pour the pepper jack sauce over the enchiladas. I like to pour it down the center and let some of the tortillas stay exposed on the sides. This gets them extra toasty and delicious. 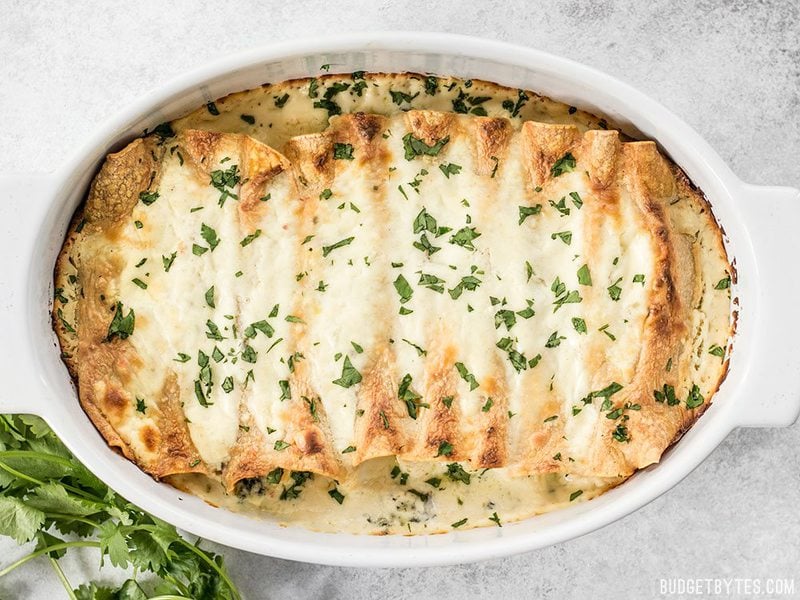 Finally, bake the enchiladas in the preheated oven for 35-40 minutes, or until the tortillas are brown and crispy on the edges and the pepper jack sauce has thickened and browned around the edges. Top the enchiladas with chopped cilantro for garnish, if desired. 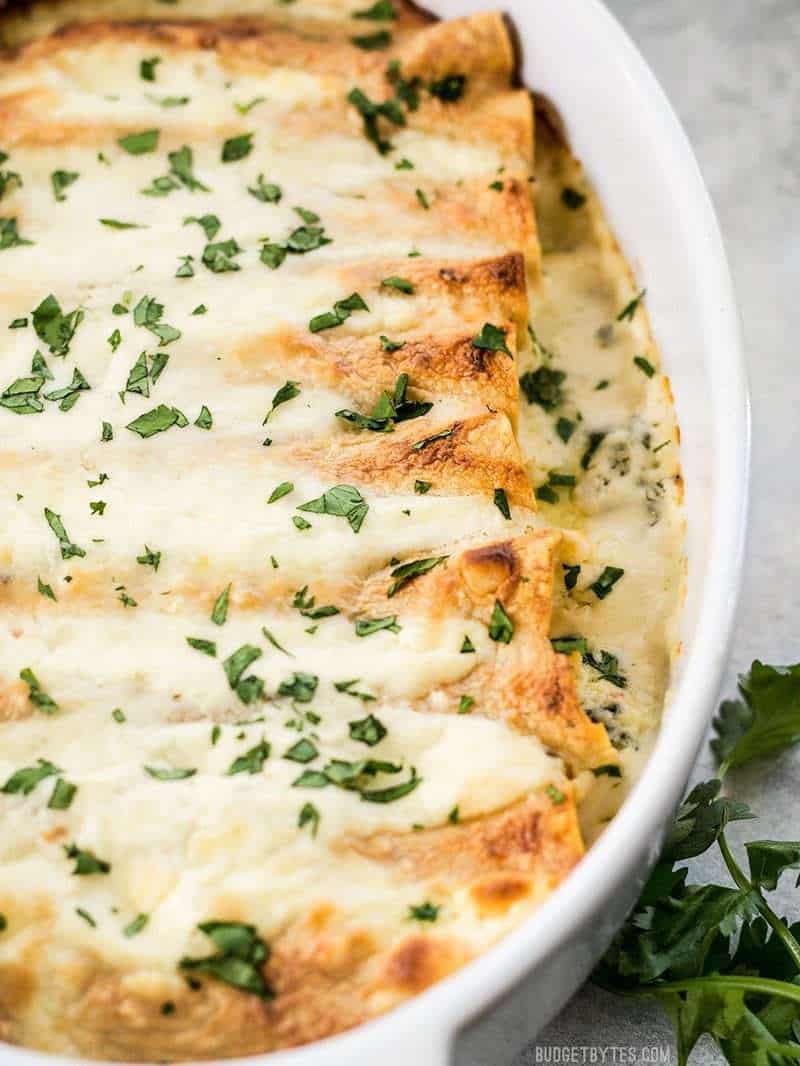 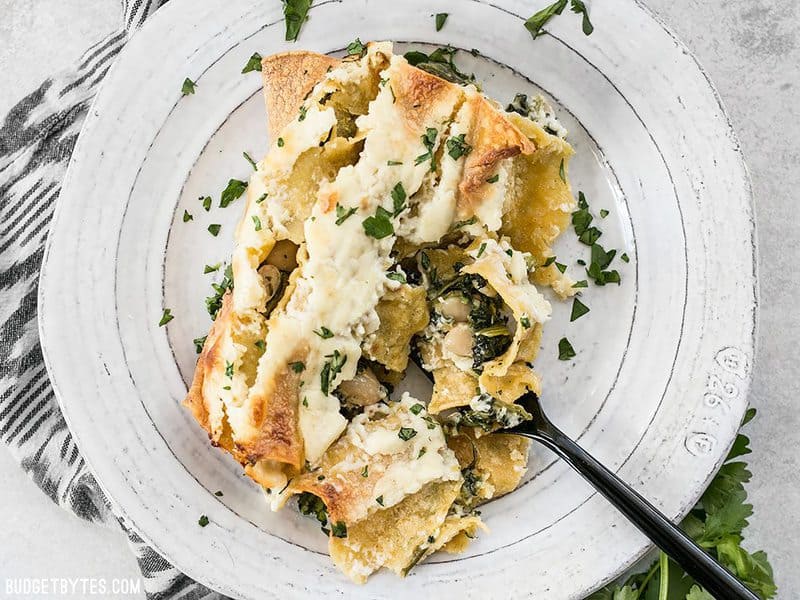