You know how spinach artichoke dip is so good that sometimes you want to just order the appetizer as your meal and not share it with anybody? I hereby give you permission to. Well, as long as you make it yourself and turn it into this meal-worthy Spinach Artichoke Pasta instead of spending $8 for one serving dip. And I guess you can share because you’ll have enough to feed six. ;)

I started with my favorite spinach artichoke dip recipe, added some pasta to make it more meal-worthy, and then made a few substitutions to make it more saucy and a little less guilt-inducing.

The absolute best part about this Spinach Artichoke Pasta is that it literally came together in the time that it took me to boil the pasta. It seems like a lot of my recipes have been really time consuming lately so it was really refreshing to make something that was so quick and so delicious. It’s a WINNER!

Scroll down for ingredient substitutions and add-in ideas. 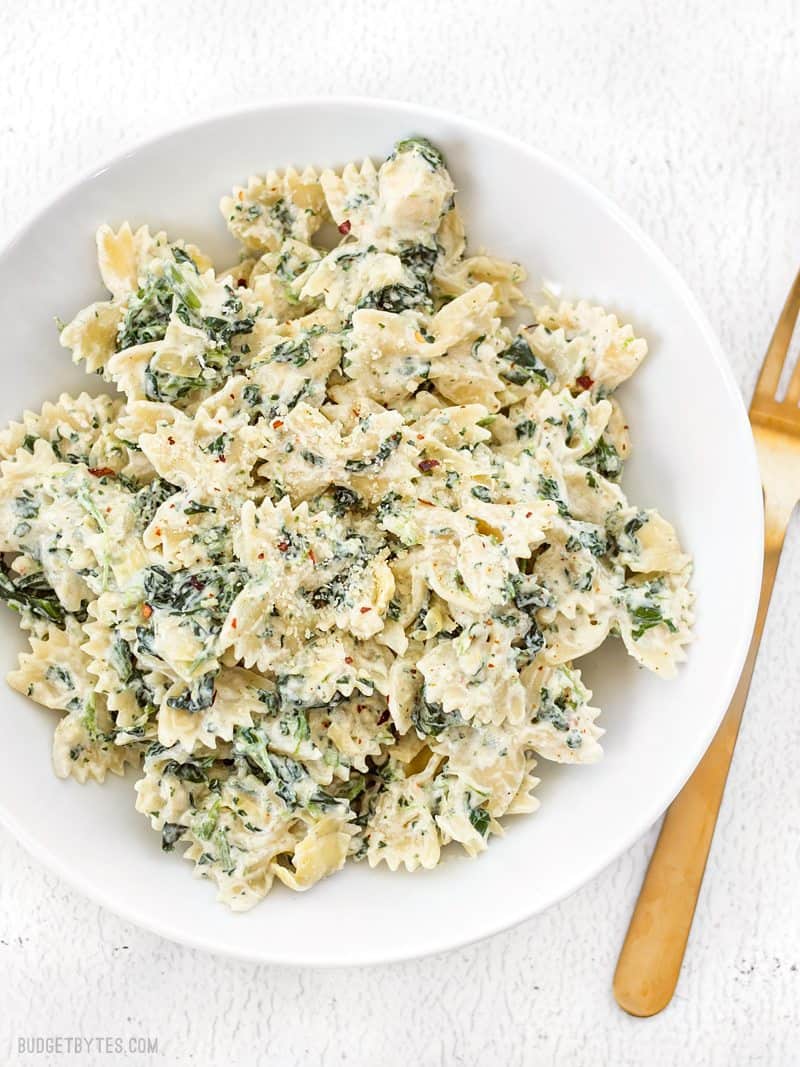 To make this Spinach Artichoke Pasta a little lighter, you can substituted neufchatel cheese for cream cheese (1/3 less fat). I also nixed the mayonnaise and mozzarella that are in traditional spinach artichoke dip and used some milk instead because I needed this to be a bit more saucy than dip-like in order to coat the pasta. You could also sub low-fat sour cream for the regular if you want. I wouldn’t suggest using fat free sour cream or cheeses in this as they don’t do well texturally when melted or in sauces.

Can I Substitute the Wine?

I used white wine in my sauce because it’s Friday night and I know I’ll finish the bottle. Plus, it was a cheap $7.99 bottle so 1/4 cup didn’t add significantly to the total cost. If you don’t want to use wine, you can sub chicken or vegetable broth instead. But let me tell you, the wine adds a fantastic, unique flavor element.

Can I Substitute the Hot Sauce?

If you don’t want to use spicy hot sauce, I would substitute it with lemon juice. You need the acidic tang given by either the vinegar in the hot sauce or the lemon juice to brighten up the creamy sauce. I found that the hot sauce wasn’t spicy enough for me so I ended up adding red pepper flakes too.

Okay, one more thing. Grilled chicken, crab or lobster meat would be EXCELLENT mixed in if you want a little more protein. 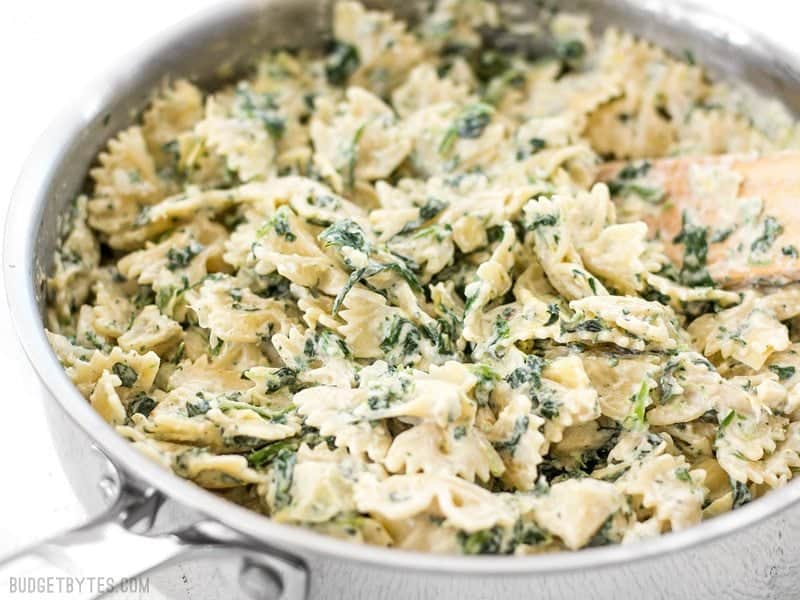 4.43 from 14 votes
It's like having your favorite restaurant appetizer for dinner! Spinach artichoke pasta is filling, flavorful, and creamy! 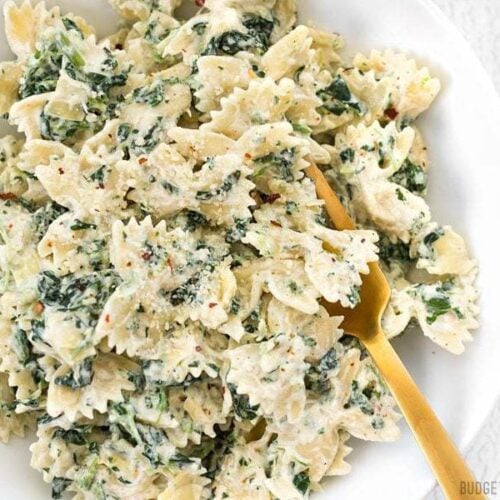 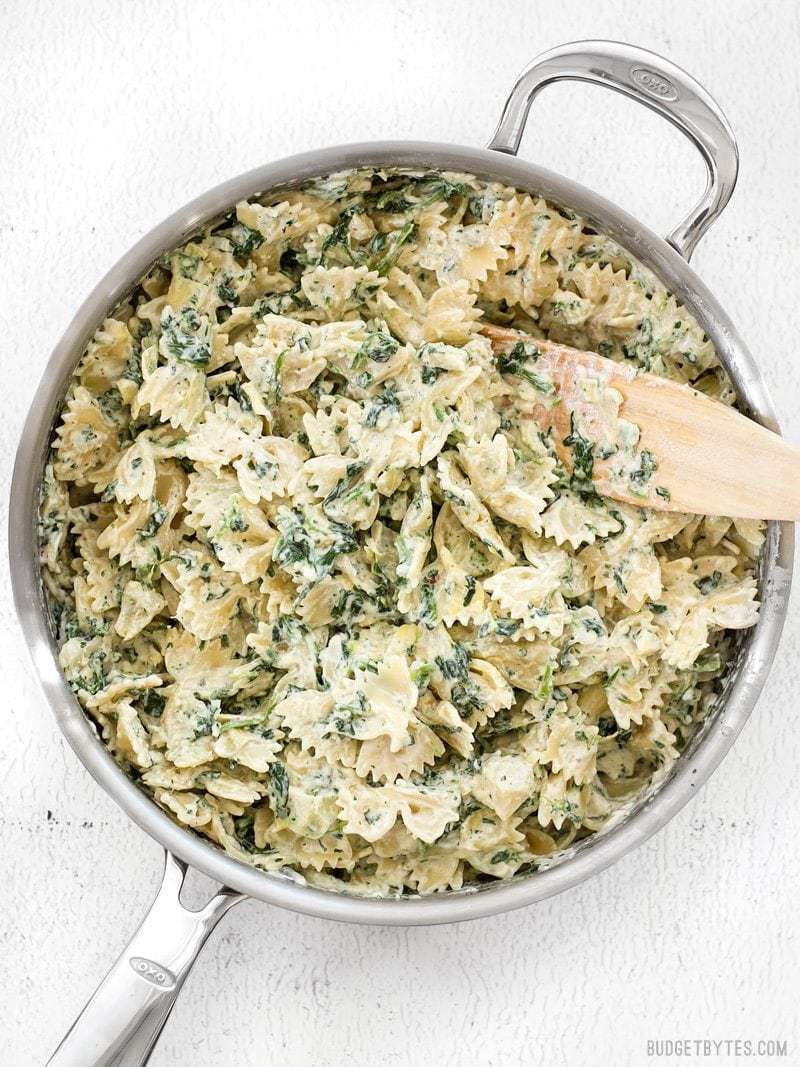 How to Make Spinach Artichoke Pasta – Step By Step Photos 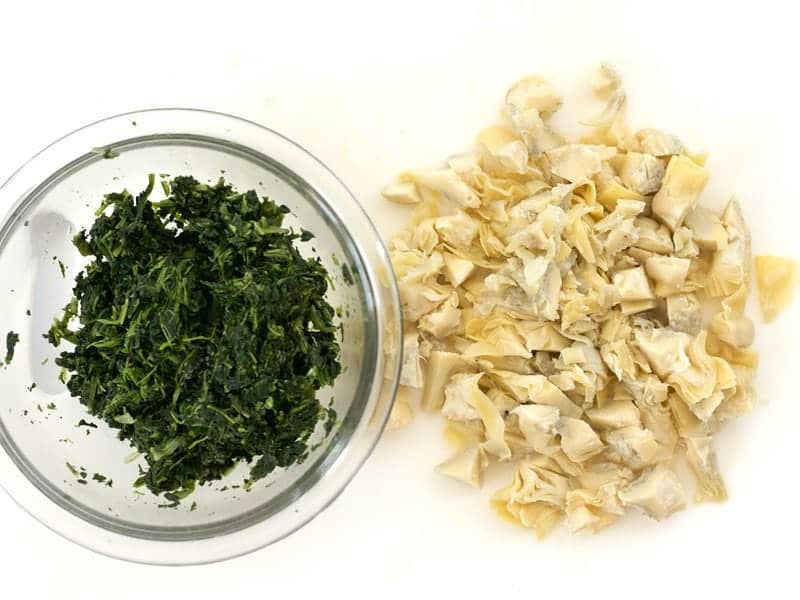 Let 1/2 lb. of frozen chopped spinach thaw, then squeeze out the excess moisture. Drain one 14oz. can of artichoke hearts, then roughly chop them into smaller pieces. Bring a large pot of water to a boil for the pasta. Once boiling, add the pasta, stir, and continue to boil until the pasta is tender. Drain the cooked pasta in a colander. 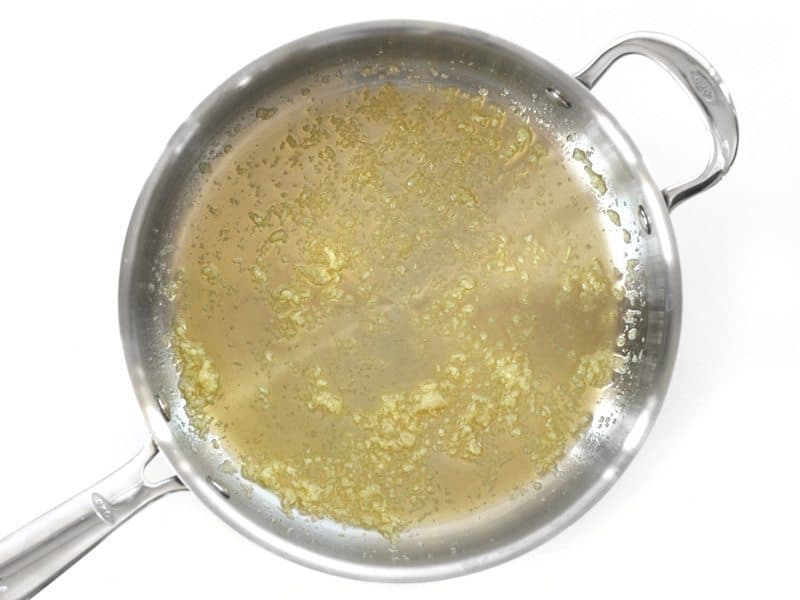 While the pasta is cooking, prepare the sauce. Mince four cloves of garlic, then add them to a large skillet with 2 Tbsp olive oil. Sauté the garlic over medium heat for about one minute, or just until the garlic softens a bit. 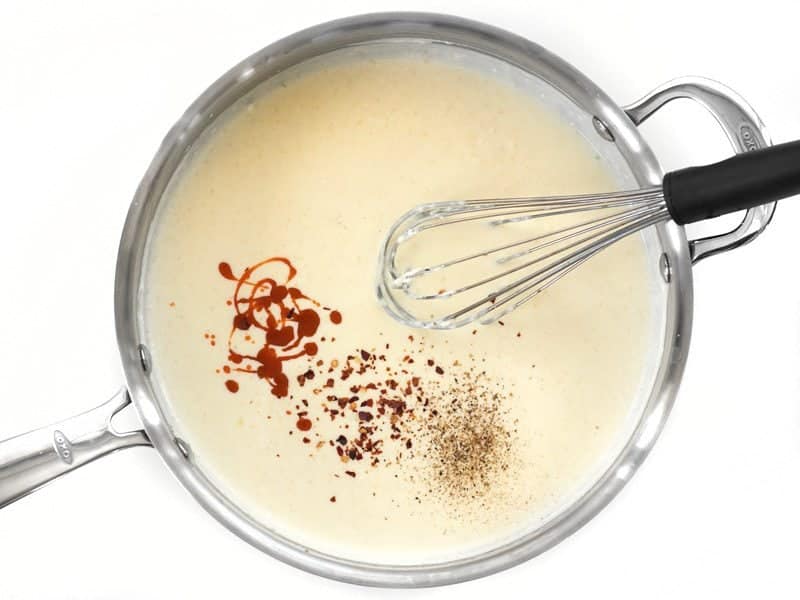 Add 4oz. cream cheese, 1/2 cup sour cream, and 1/4 cup white wine to the skillet with the garlic and olive oil. Heat and stir until the cream cheese has melted in and the sauce is smooth, then whisk in 1/2 cup milk and heat through again. Once hot, turn the heat down to low and stir in 1/2 cup grated Parmesan cheese. Season the sauce with a few dashes of hot sauce, 1/4 tsp red pepper flakes, and a pinch of salt and pepper. 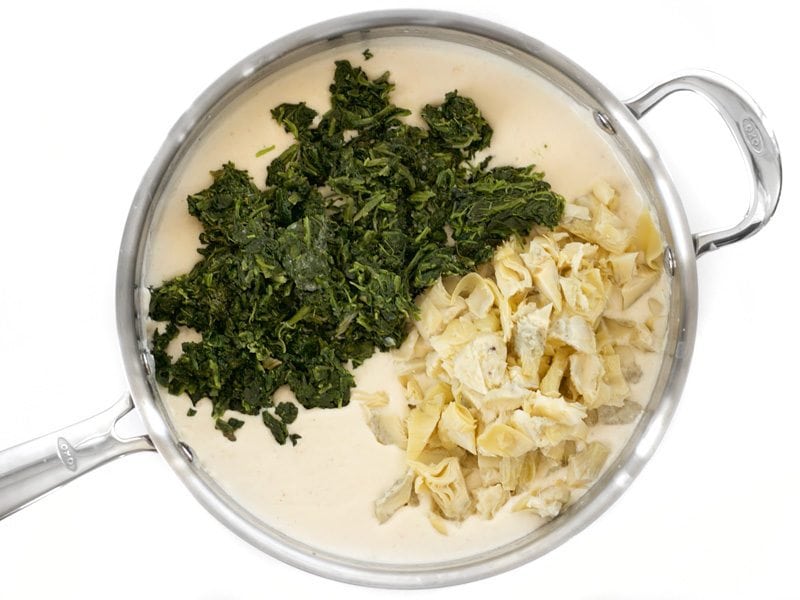 Stir in the spinach and artichoke hearts. 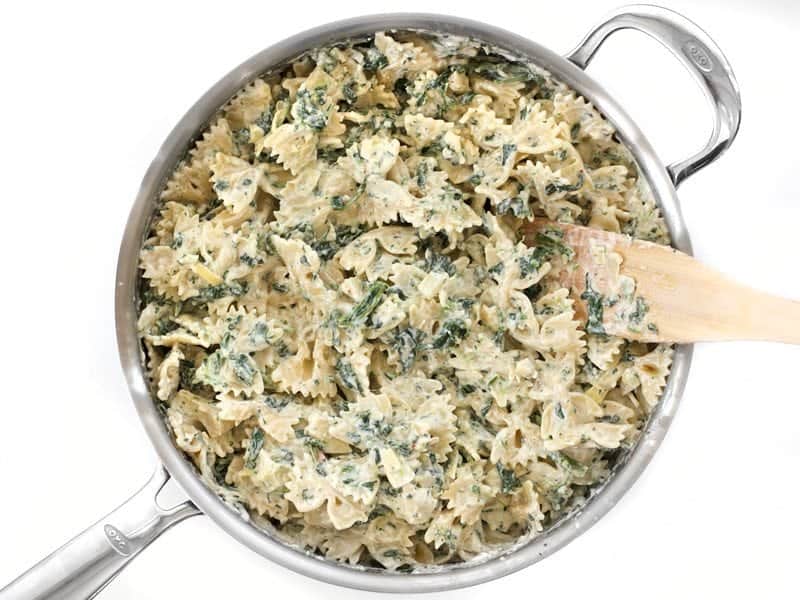 Finally, add the cooked pasta and stir to combine. Taste and adjust the salt, pepper, or hot sauce as desired. 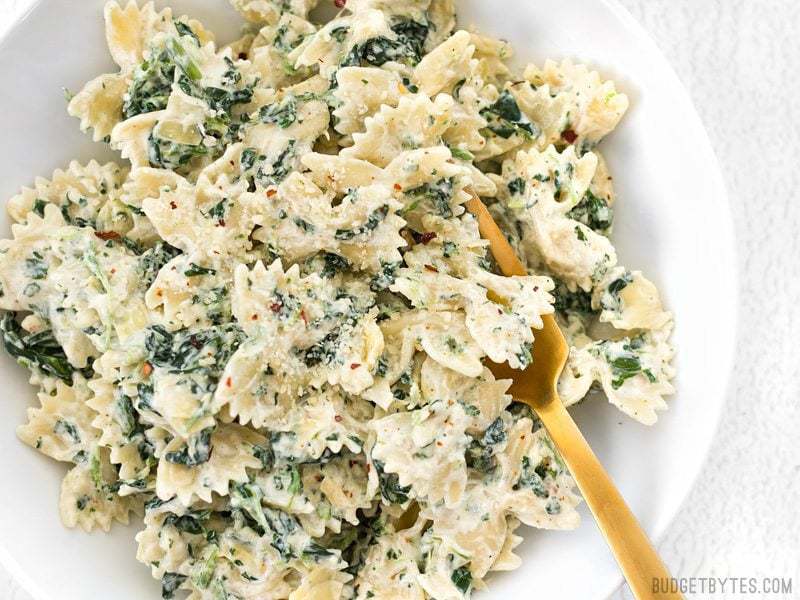