I really wanted to have this recipe ready for y’all yesterday, because it really is one of those “weekend day-cooking” sort of recipes, but I have been glued to social media since late last week, watching as the city where I lived for almost ten years was washed away by the three months worth of tropical rains that fell in just a few short days. Luckily all of my friends and family are safe, but I watched pleas for rescue, people trying to find lost loved ones, and images of destruction fill my feed for days. I finally broke away on Sunday and cooked a few things, including this Slow Cooker Jambalaya. Cooking was therapeutic, but I wish I was out there cooking for the over ten thousand people who are stuck at shelters with no where to go. But from this distance, I’ll have to do the best I can with donating supplies and helping support relief programs.

But back to this recipe. Jambalaya is a natural “budget” recipe because it combines flavorful and inexpensive cuts of meat (smoked sausage and chicken thighs) with bulky and inexpensive ingredients, like rice, onion, celery, and bell pepper. Add a good handful of spices and you have a super filling and very satisfying meal that freezes well and reheats effortlessly in the microwave. Total winner. While jambalaya is not difficult to make on the stove top, it’s still SUPER hot here, so I like to use my slow cooker when I can. Everything in this Slow Cooker Jambalaya is cooked in one pot, including the rice. Cooking rice in a slow cooker might sound like a mushy mess, but as long as you add it at the very end, you can control the texture a bit more and get good results.

This recipe depends greatly on the sausage that you buy, which accounts for about half of the flavor in the dish. I had one of those “small changes make big differences” moments at the grocery store and bought smoked turkey sausage instead of regular smoked pork sausage, and I kind of regret it. But hey, it all depends on your priorities. Just be aware that the sausage can make or break this recipe. And while I think you could easily skip the chicken thighs to reduce the meat load of the dish, do not skip the smoked sausage. 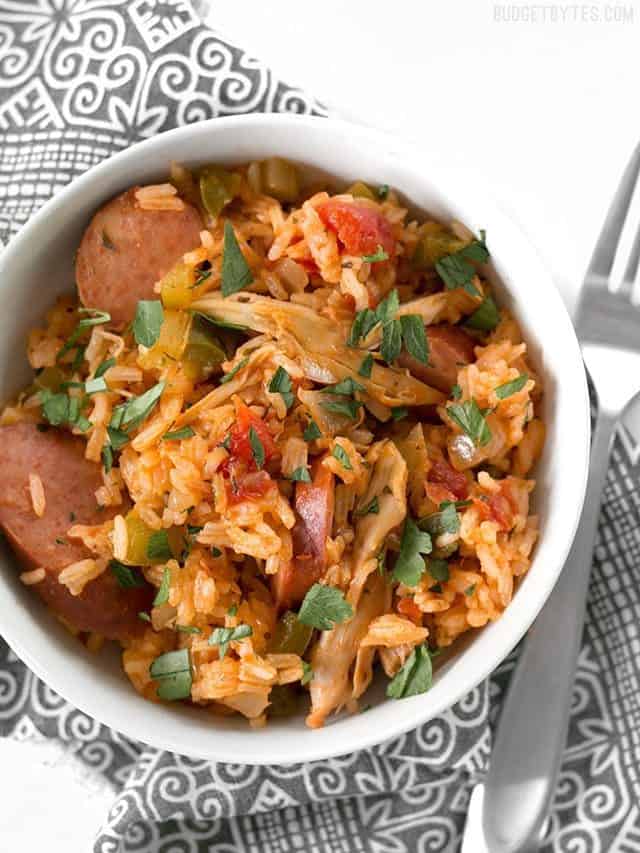 4.16 from 97 votes
Slow Cooker Jambalaya is a Louisiana classic made simple, with all the big flavor and half the effort.
Author: Beth - Budget Bytes 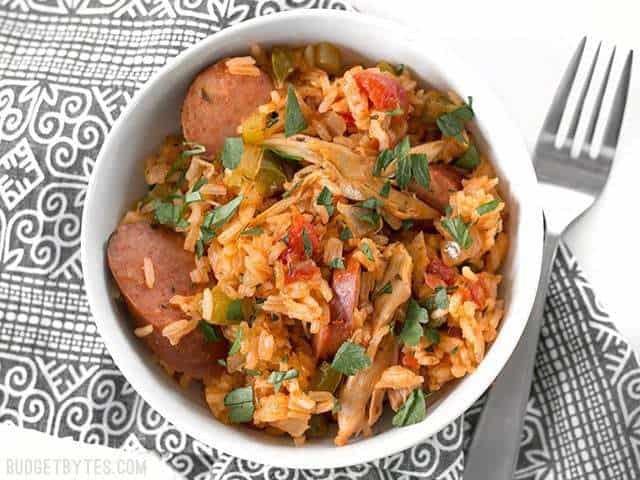 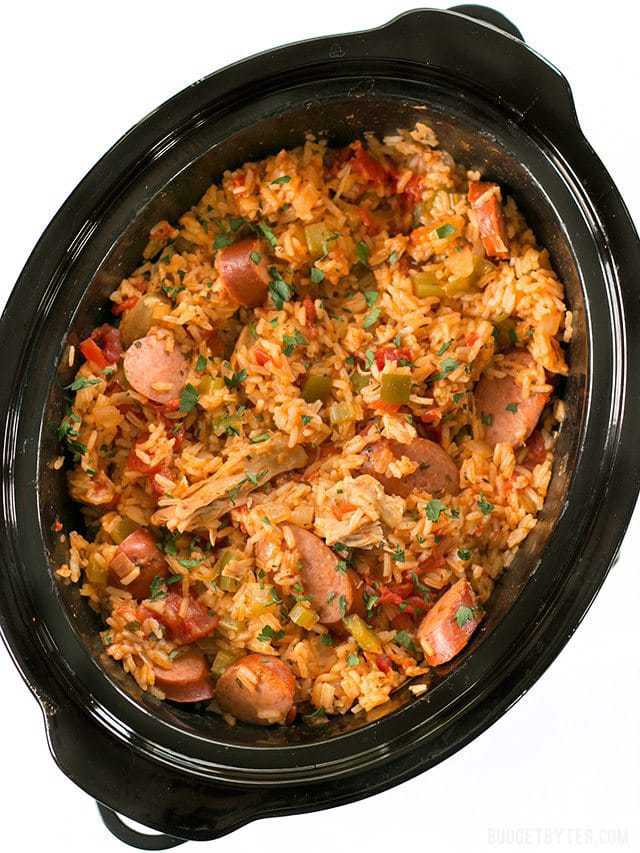 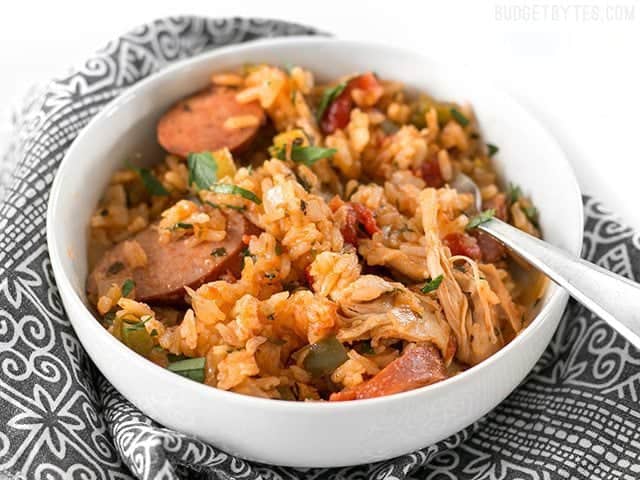 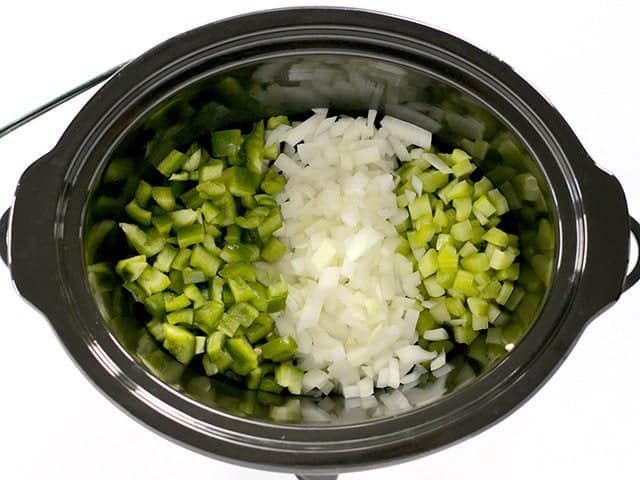 Start by dicing three ribs of celery, one yellow onion, and one green bell pepper. Mince two cloves of garlic. Add the bell pepper, onion, celery, and garlic to a 5 quart or larger slow cooker. 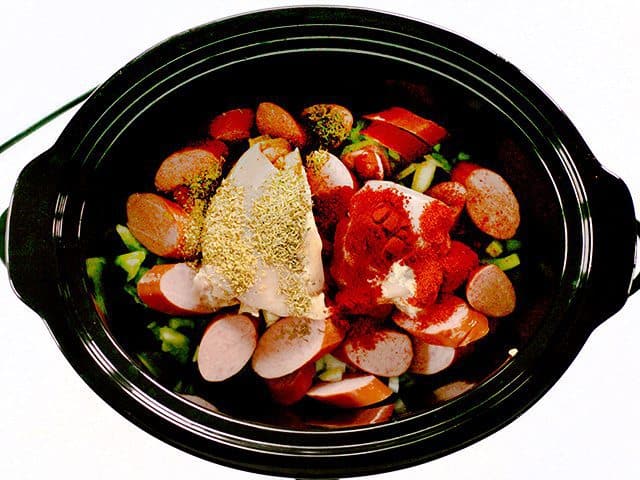 Add 12-16oz. sliced smoked sausage, two boneless, skinless chicken thighs, 1 tsp dried oregano, 1 tsp dried thyme, 1/2 Tbsp smoked paprika, 1/2 tsp cayenne pepper, and a healthy dose of freshly cracked black pepper (15-20 cranks of a pepper mill). Sorry this photo looks so funky. One of the black storm clouds that was dropping all that rain sailed in right as I was preparing this step, then it left just as quickly… 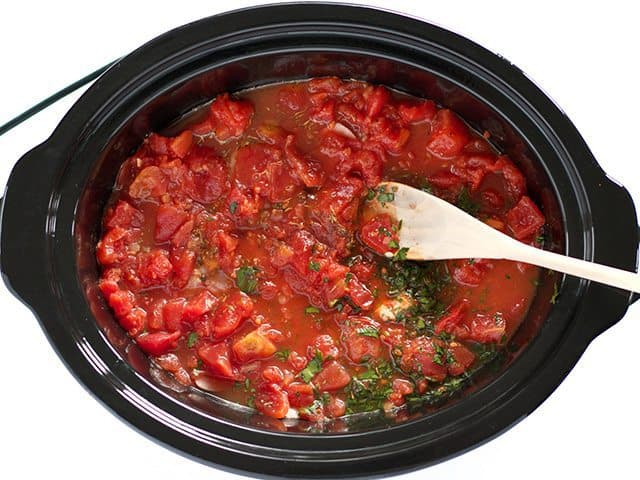 Add two 15oz. cans of diced tomatoes (or one 28oz. can), a handful of fresh parsley, and 2 cups of chicken broth. Stir briefly. 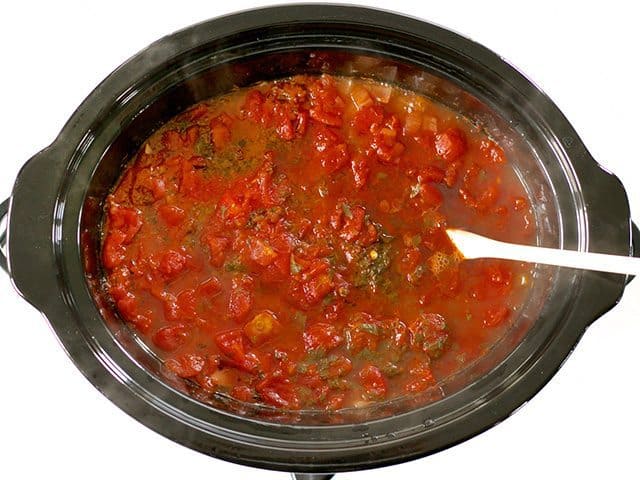 Place the lid on the slow cooker and cook on high for four hours. The liquid should be boiling in the pot after four hours. It’s important that it be boiling for the rice to cook correctly. 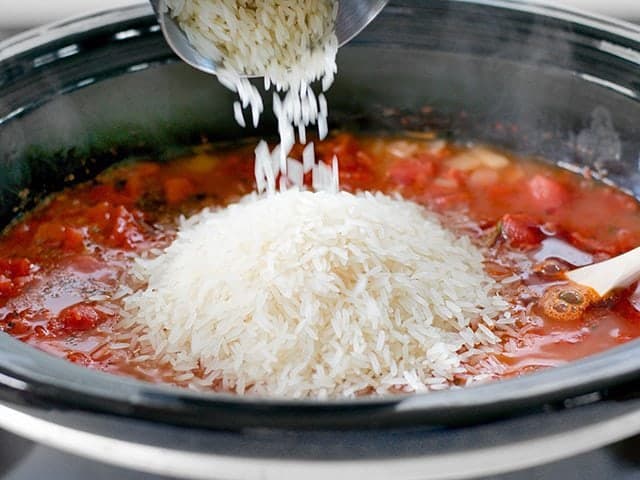 Remove the lid just briefly to remove the chicken thighs. Shred the meat and stir it back into the pot with two cups of uncooked long grain white rice. 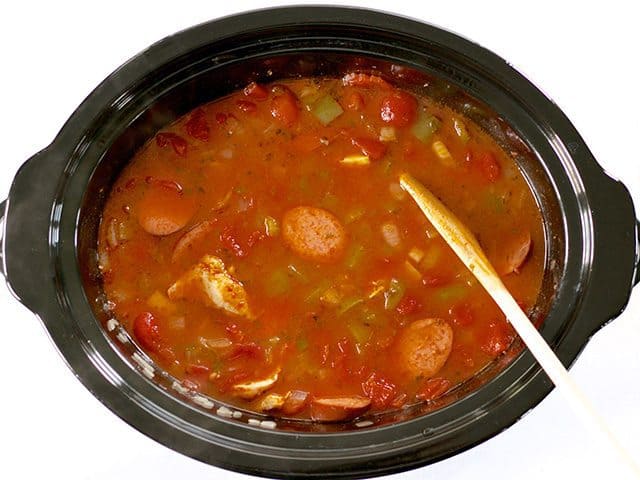 Make sure all that rice is submerged under the liquid, then replace the lid as quickly as possible so that it returns to boiling quickly. 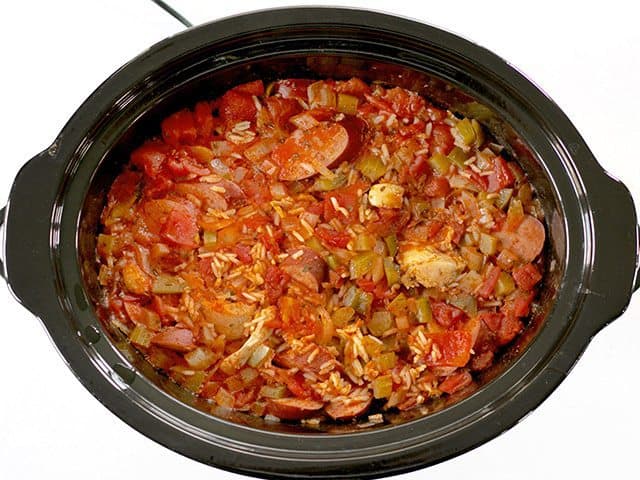 Let it cook on high for 20-25 minutes more, or until the rice has absorbed most of the liquid. 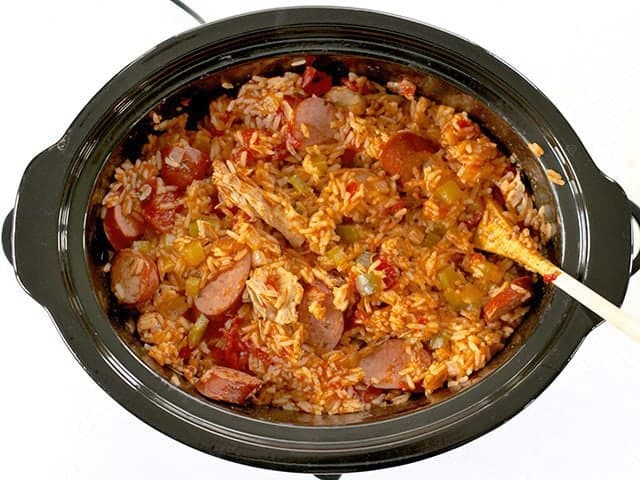 Stir the pot gently to mix everything together and fluff the rice (don’t stir too vigorously or the rice will become gummy). top with some extra chopped parsley and a few sliced green onions, then serve your Slow Cooker Jambalaya. 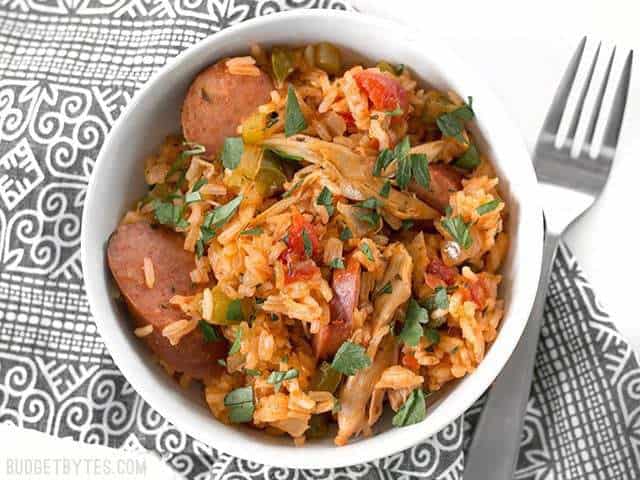 I totes forgot my green onions! Which is a shame because green onions are such a quintessential flavor in jambalaya. No worries, though. I still have leftovers that can get the green onion treatment! Leftovers for days cuz that’s how I roll.