I’m going to start this by admitting that this is the VERY first time that I’ve ever made my own chicken broth. I’ve been meaning to for years… and it’s almost hypocritical of me not to, but for some reason I never got around to trying it.

So, don’t read this post as a “definitive guide” to making chicken broth, but rather a “here is my experience, you should try it too!” Also, because I know there are A LOT of you who have been doing this for years, I’d love it if you’d share your tips, tricks, and experiences in the comments so that we can all learn from each other :)

So what was my experience? OMG, so easy. Seriously, dump it all in the pot and let it go. Come back later and you have a magical golden liquid full of flavor and good for you nutrients. Why wouldn’t you want to do this?! Plus, I always get warm and fuzzy inside when I know that I’ve reduced my waste. By making broth you get to use every last bit of goodness in your chicken and vegetable scraps. I can’t wait to make some vegetable broth too!

1) Save your vegetable scraps from other recipes in the freezer until you’re ready to make broth. Just make sure they’re well washed first to remove sand and dirt.

2) Theresa suggested making the broth in a slow cooker instead of on the stove top for even less baby sitting. Let it go all night and you’ll have an ultra-amazing broth by morning!

I can’t wait to hear everyone else’s tips! 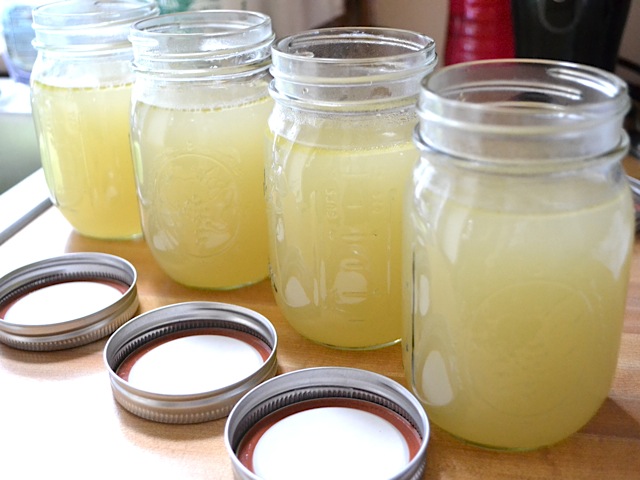 How to: make chicken broth

3 from 2 votes
How to make your own homemade chicken broth using scraps from other recipes.
Author: Beth - Budget Bytes 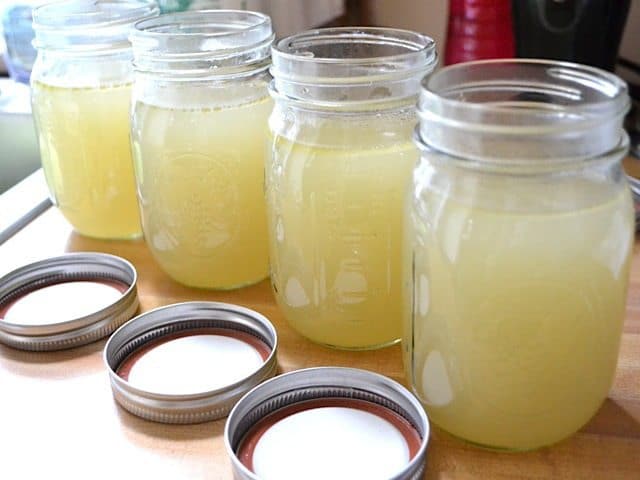 NOTE: While cooling in the refrigerator, the fat will rise to the top and harden. It can be removed at this point if desired, but I find that it adds a great deal of flavor. If your broth thickens or gels after refrigerating, don’t be afraid. That is normal and a good sign that you got all of the flavor an nutrients from your chicken!
Read our full nutrition disclaimer here. 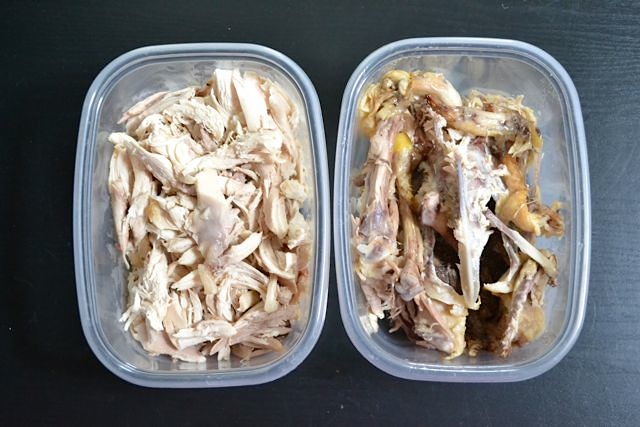 So, I roasted a whole chicken in my slow cooker last weekend, and after it was cool enough to handle I picked the meat off and saved the bones and scraps until I was ready to make the broth. 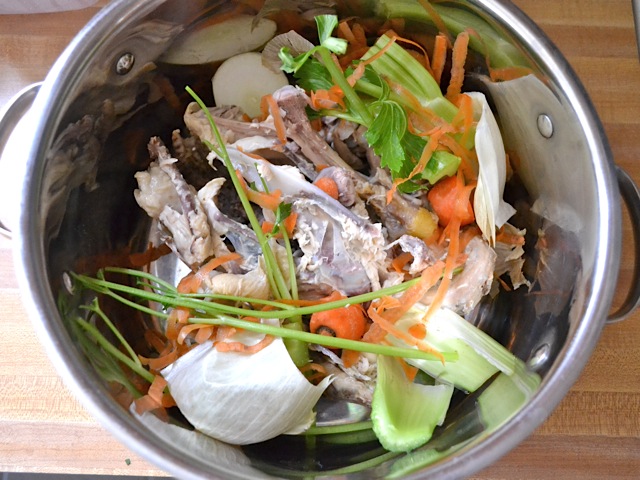 The next day, after I had accumulated some vegetable scraps, I started the broth. First things first, make sure the vegetable scraps are CLEAN. Sand in broth is not good. I had celery tops and stems, carrot ends and peels, onion peels, and some parsley stems. Place them in a large pot along with your chicken carcass. 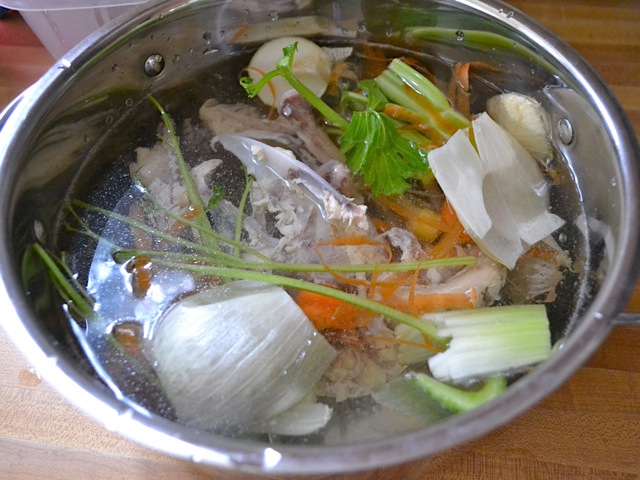 Cover the whole thing with fresh water. I used 12 cups. Bring the pot up to a boil over medium-high heat and then reduce it to low and let simmer (with a lid) for 3-4 hours. 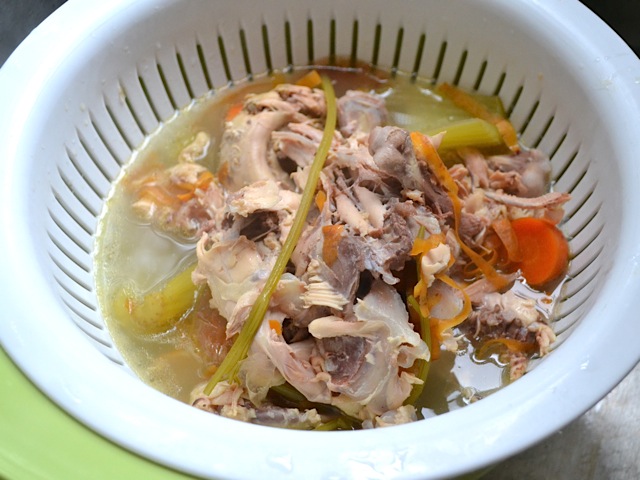 After you’ve simmered all of the goodness out of your scraps, it’s time to strain out the magical golden liquid. Place a colander over a large bowl and pour the whole pot through it. Discard the collected scraps. 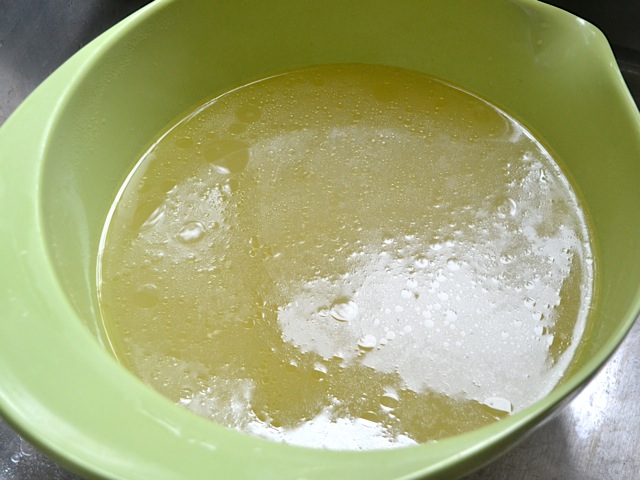 After the first strain, this is what I had. It’s already golden and beautiful. And it smells delightful too. 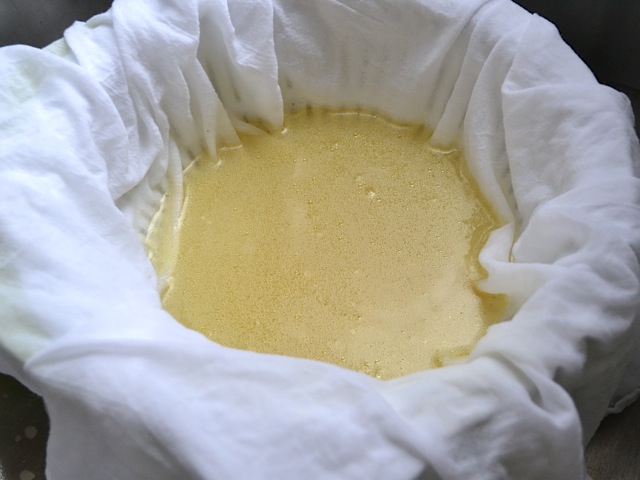 You’ll want to strain a second time through a fine weave, lint-free cloth to remove any small particles that may have passed through the colander. I just laid my cloth out over the colander and poured through again. 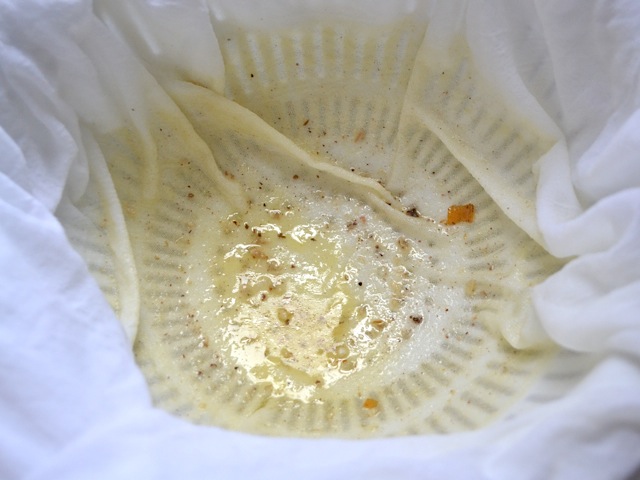 It didn’t catch much, but I bet if I had simmered for longer everything would have broken down more and there would be more small particles. 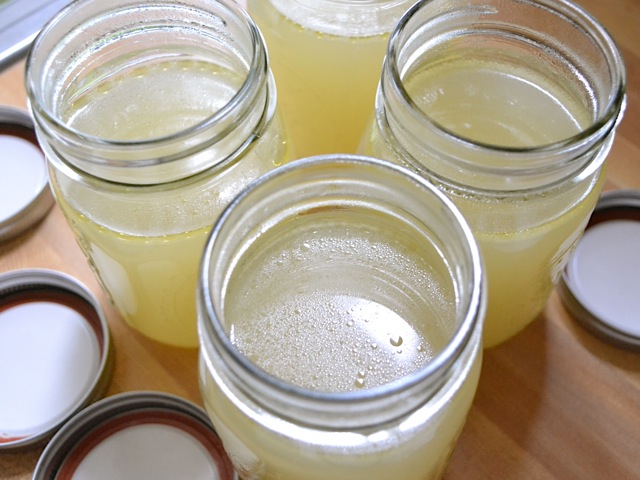 You can season your broth at this point with salt and pepper, but I prefer to leave it unsalted and then just add salt later when cooking with the broth. Adding salt at the end of a recipe allows you to use less and achieve the same flavor punch. Also, it’s always a good idea to divide your broth (or any food) into smaller containers before refrigerating so they cool down faster. Always chill the broth before placing it in the freezer.

I put my broth in jars because they were sitting there on my counter, but I like to freeze sauces and liquids in quart sized freezer bags. You can freeze in glass jars, but make sure to leave room for the liquid to expand as it freezes, or else your container will burst.