I think we’re experiencing one of the last cold spells of the year here in Louisiana, so I wanted to make one last hearty, soul-warming soup. This Navy Bean Soup was incredibly easy, but boasts huge flavor and major filling power. In short, it’s AWESOME. With tons of flavor, fiber, and vegetables, this is definitely going to be one of my go-to winter soups from now on! 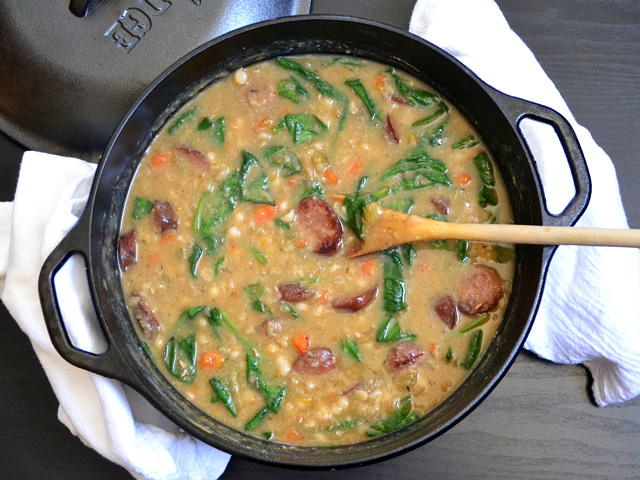 Lately I’ve been trying to ween myself off of my bouillon crutch. I usually use chicken bouillon (Better Than Bouillon brand) to add oomph to my soups and just make the whole process super easy and flavorful. What I’ve found recently, though, is that I really enjoy the subtly of broths made simply by the vegetables and herbs that I use in the soup. Plus, this way you can be in complete control over the sodium.

Do I Have to Use Smoked Sausage?

I used smoked sausage in this soup, but there are a couple of options if you don’t want to use sausage. You can substitute the sausage with bacon (about 6 ounces should do), or you can use a smoked ham hock. The ham hock doesn’t need to be sautéed, just add it in when with the beans, herbs, and water. If you want to do a vegetarian version, just add a little liquid smoke to give the broth that nice smokey depth. The vegetables and herbs should add all of the flavor that you need!

Can I Use a Different Type of Bean?

Navy beans are a good choice for this white bean soup because they break down as they cook and make the soup deliciously creamy. Another good white bean would be Great Northern Beans because they also tend to break down well during the cooking process. Cannellini beans, which are larger and tend to hold their shape, might not work as well. I’ve also made similar soups using black eyed peas (see Slow Simmered Black Eyed Peas and Greens).

This recipe makes a huge batch, but it can be easily halved, or you can freeze half for later. If freezing your soup, make sure to divide it into single portions right after cooking (so it cools quickly), cool it completely in the refrigerator overnight, then transfer to the freezer the next day. And make sure to label and date the containers! :)

4.78 from 27 votes
A rich hearty navy bean soup made from scratch with dry beans, smoked sausage, spinach, and other vegetables for a delicious and filling meal in one bowl.
Author: Beth - Budget Bytes 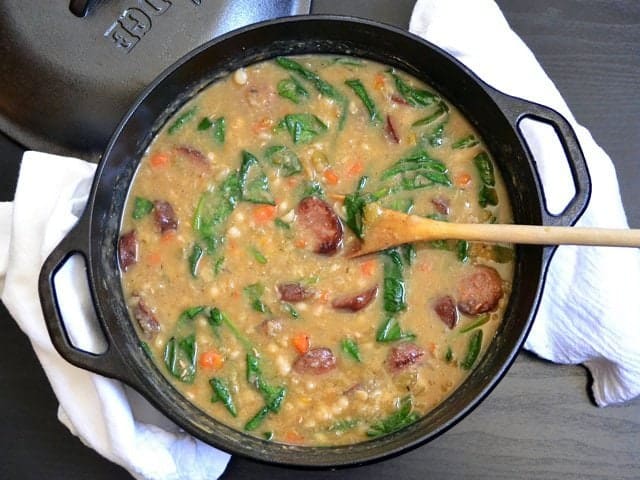 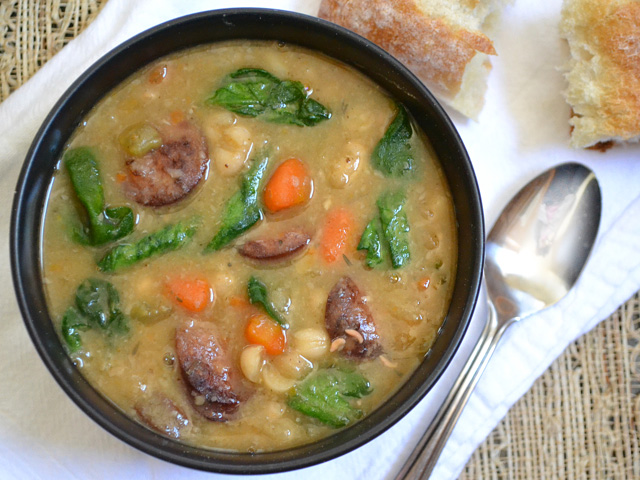 How to Make Navy Bean Soup – Step By Step Photos 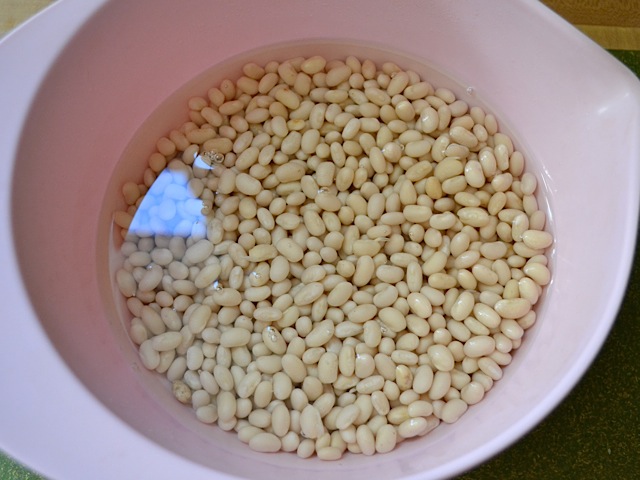 The night before making the soup, add the beans to a large bowl and cover with 2x the amount of water. Allow them to soak in the refrigerator overnight. 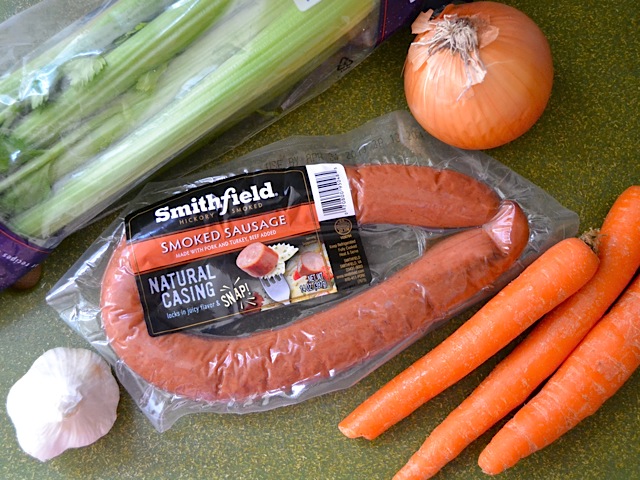 The soup starts with these ingredients. They all come together with a few herbs to make a wonderfully flavorful broth without any bouillon. Oh yeah, start soaking the beans the night before. 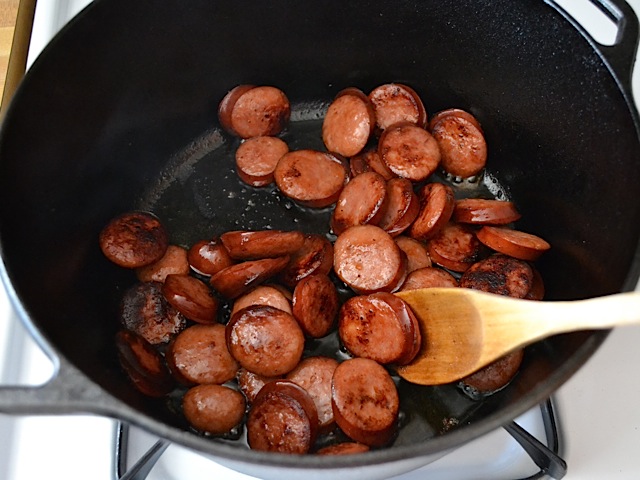 Cut the sausage into medallions and brown it with a little bit of olive oil over medium heat. Pour off the excess fat. 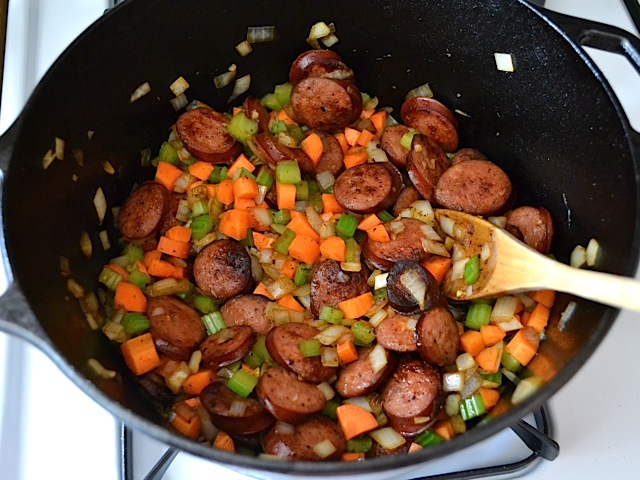 While the sausage is browning, dice the onion, carrot, and celery into small pieces. This soup is totally veggie-licious, but I didn’t want it to be too chunky, so I cut all of them into small pieces. Mince the garlic. Add the vegetables to the pot with the sausage and saute for about five more minutes. The moisture will help dissolve all of the browned bits from the bottom of the pot (aka “flavor”). 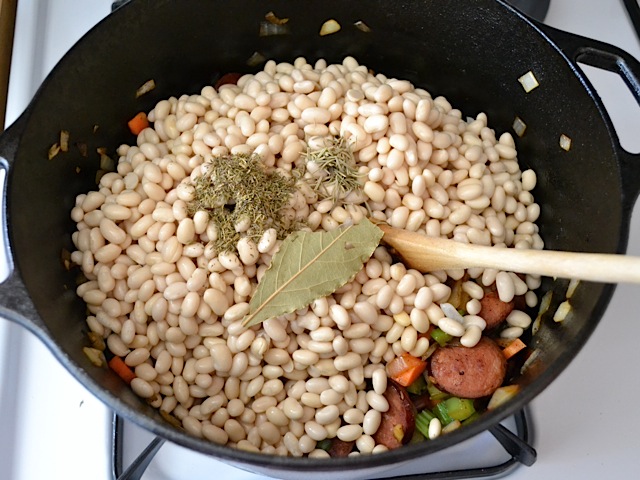 Rinse and drain the soaked beans. Add the rinsed beans, bay leaf, thyme, rosemary, and some freshly cracked pepper to the pot. 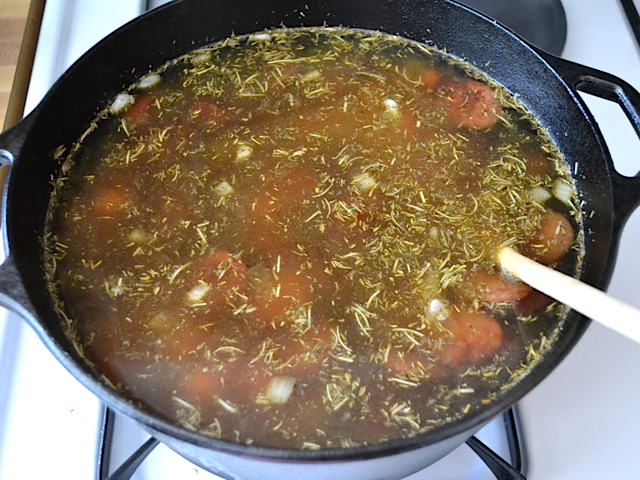 Add 8 cups of water and stir until everything is combined. Turn the heat up to high and bring the pot up to a full boil. Having a lid in place will help it come to a boil faster. Once it reaches a full boil, turn the heat down to medium-low and let it gently boil for two hours with the lid in place. This long boiling process will help the beans break down, but you’ll want to use your spoon to smoosh some of the beans against the wall of the pot. After you start doing that, the soup will really start to thicken up. 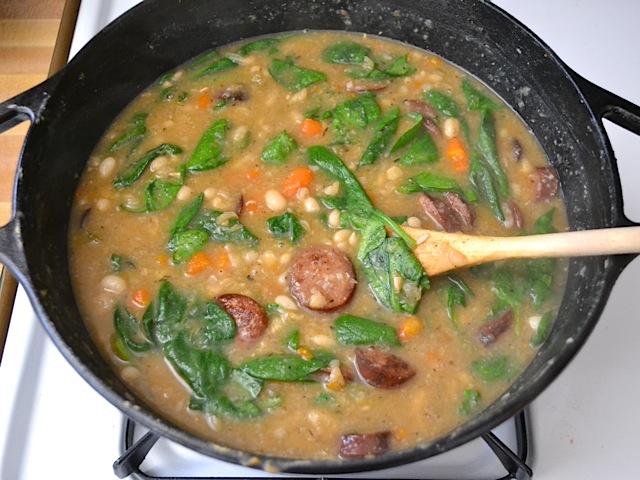 Stir in the fresh spinach until it’s wilted. Lastly, season the soup with salt and about a teaspoon of apple cider vinegar. Serve hot! 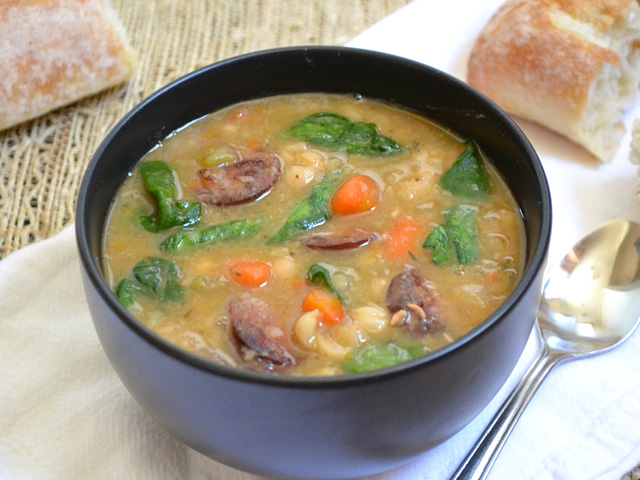 Yum! So hearty, so easy, SO delicious!