The other day I needed something really fast and easy for lunch and I was craving Swiss cheese (weird, right?). Well, my solution to that problem was this: sauté up some mushrooms and garlic, add some frozen spinach, pile it onto bread, cover with swiss, and broil until melted. Super fast, easy, and delicious. And, I got my pizza fix without feeling too guilty. Mushroom Spinach and Swiss French Bread Pizzas for the win!

Mushrooms and Swiss tend to be on the expensive side of the ingredient spectrum in my part of the world, but I balanced out the cost of this recipe by pairing them with two ingredients that are inexpensive: frozen spinach and French bread (the soft fluffy kind that you find in most grocery store bakeries). With a final price of $1.44 per pizza, I could definitely afford to eat two if I was super hungry. I’ve been reheating the leftovers in the microwave and although they’re not crispy that way, they’re still quite delicious. A toaster oven would be ideal for reheating. 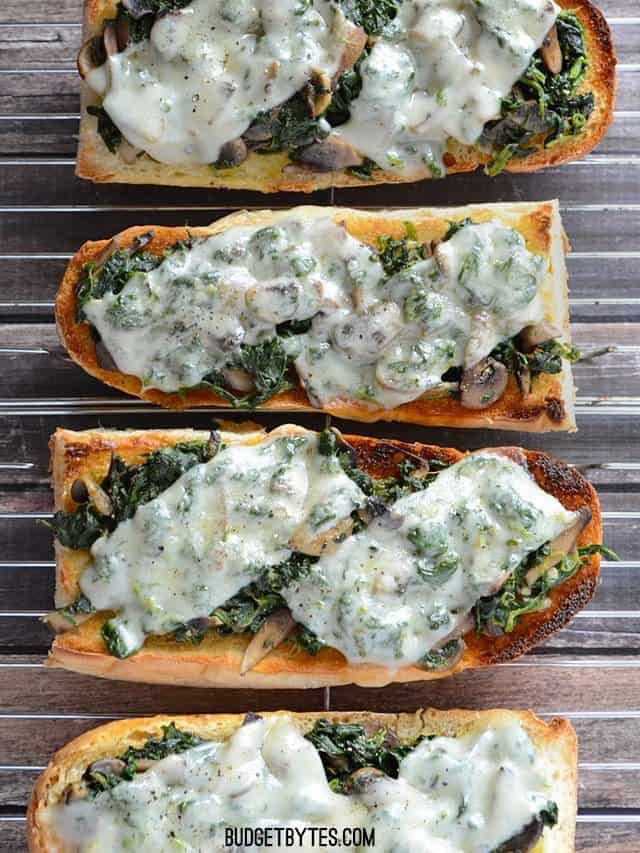 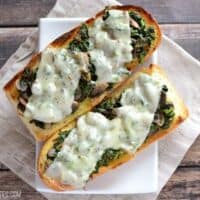 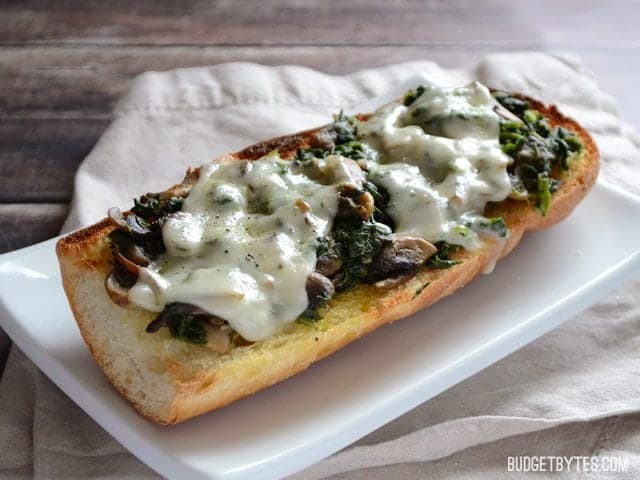 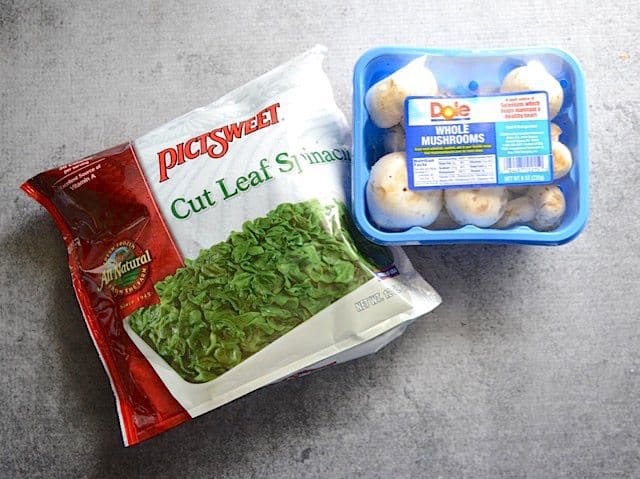 For this recipe I used one 8oz. container of button mushrooms and about 8oz. (1/2 lb.) of frozen spinach. The bag of frozen spinach is 12oz., so I just estimated 2/3 of the bag. You can add a little more or less without it hurting the recipe. Wipe the mushrooms clean, then slice them into thin pieces.

Add 1 Tbsp of olive oil to a large skillet, along with 2 cloves of minced garlic. Sauté the garlic for about a minute over medium heat, or just until it becomes a little soft and fragrant. Add the sliced mushrooms and continue to sauté until the mushrooms become limp and dark brown. The mushrooms will initially soak up all the oil and the skillet will appear dry, but once they begin to heat they will let off liquid. You can add a pinch of salt to help the mushrooms expel their moisture.

Add the 8oz. of frozen spinach and continue to sauté until the spinach is thawed and heated through. Season the skillet with salt and pepper to taste. I added about 1/4 tsp salt and a healthy dose of freshly cracked pepper. 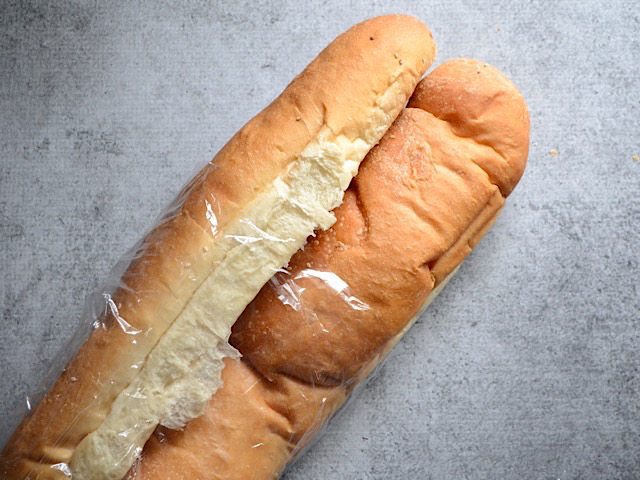 I got this twin pack of French bread for $1.79 and each piece was about 16-17 inches long. I ended up only using one. Cut the French bread in half to make two 8-inch sections. Then cut the sections open as if you were going to make a sandwich. You should now have four pieces. 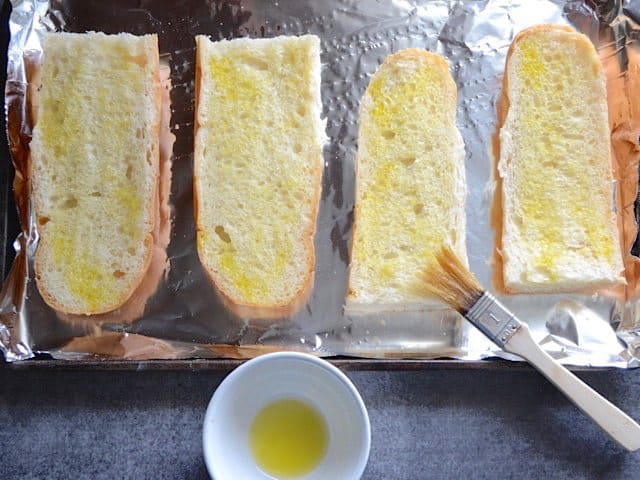 Adjust your oven rack so that the top of the French bread will be 5-6 inches away from the broiler unit. Preheat the broiler for a few minutes. Meanwhile, cover a baking sheet with foil, then place the French bread pieces on the baking sheet with cut sides up. Brush the remaining 2 Tbsp of olive oil over the open surface of the bread. Broil the bread for about 3 minutes, or just until it becomes light golden brown.

Once the bread is golden brown and a little crispy, take it out of the oven and top each piece with 1/4 of the spinach mushroom mixture. Top each bread with one slice of Swiss Cheese. I tore my slices in half to better cover the long bread. 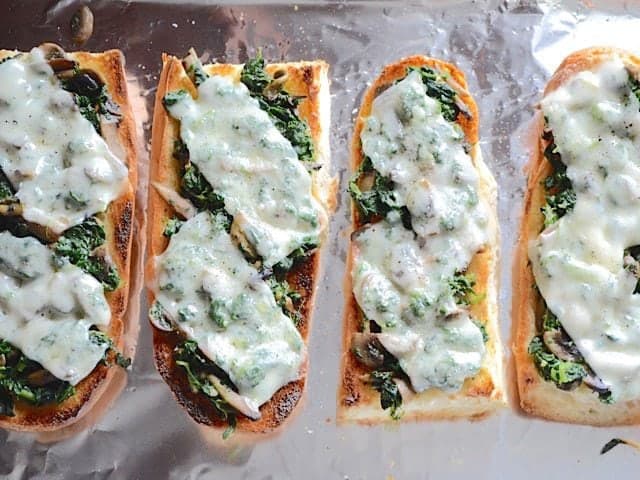 Pop the bread back under the broiler for just a couple minutes or until the cheese is hot and bubbly. This will happen quickly, so keep a close eye. The pizza is ready to eat! 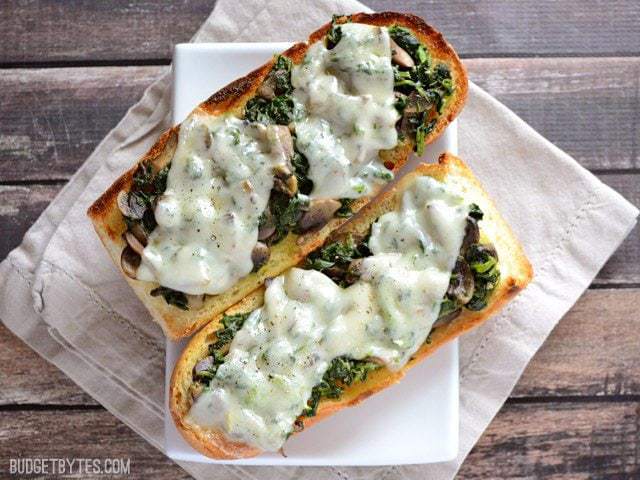