I totally don’t utilize potatoes enough in my kitchen. They’re cheap and can be used about a bazillion different ways. So, when someone asked me for a tutorial on how to make crispy hash browns, I was on it! Besides, I like making an indulgent breakfast on the weekend to celebrate the time off and these crispy hash browns made the perfect base for what I like to call my “ultimate hash browns”. Scroll to the bottom of the post to check out what I topped my hash browns with that made them so ultimate. ;)

I’m sure everyone makes their hash browns differently, but there are three things that I have found to be key to making really great, golden brown hash browns:

Yes, that’s right, OIL. Hash browns are fried and there’s just no way around that, aside from not eating them. If you don’t use enough oil the potatoes will be dry and tend to go from white to burnt. Use enough oil and you’ll get crispy yet moist potatoes with a beautiful spectrum of golden brown color.

Also on that note, you’ll want to use an oil with a high smoke point, so something like canola, corn, peanut, or sunflower oil. Butter obviously gives amazing flavor to hash browns, but the butter solids tend to burn, so you’ll want to use clarified butter or ghee instead. I didn’t have patience to clarify any butter, so I just used canola oil. #lazybutt

I used my 10″ cast iron skillet because it offers non-stick protection while giving really even heat and a nice surface for crisping. While stainless steel is also great for crisping, starchy foods (like potatoes) tend to stick a lot more on stainless, so it can be tricky. If you’re not well practiced with keeping food from sticking on stainless steel, I’d suggest either cast iron or a non-stick skillet. 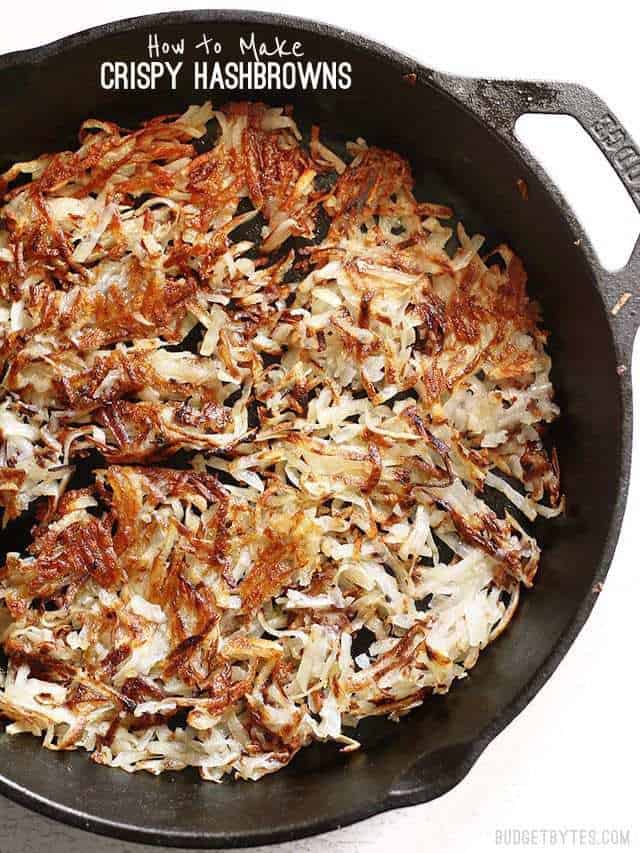 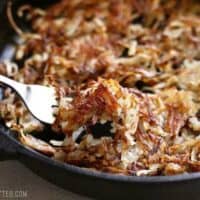 How to Make Crispy Hash Browns 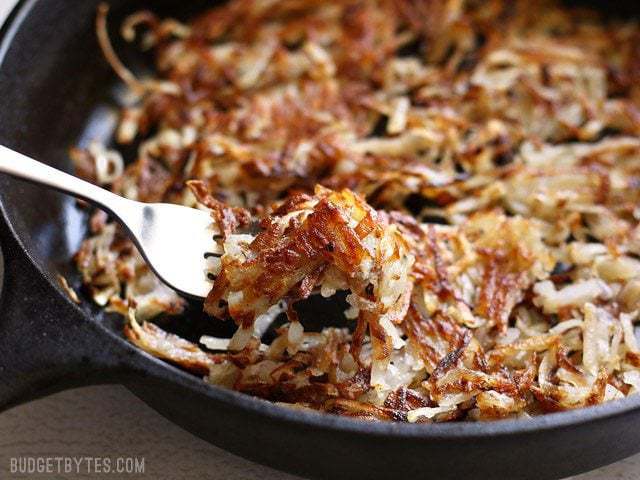 How to Make Crispy Hash Browns: 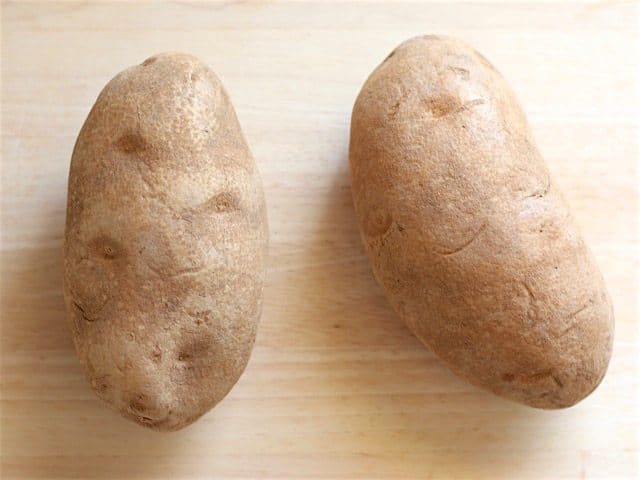 Start with two russet potatoes, or about 2 lbs. You can either scrub them clean and leave the skin on, or peel them. 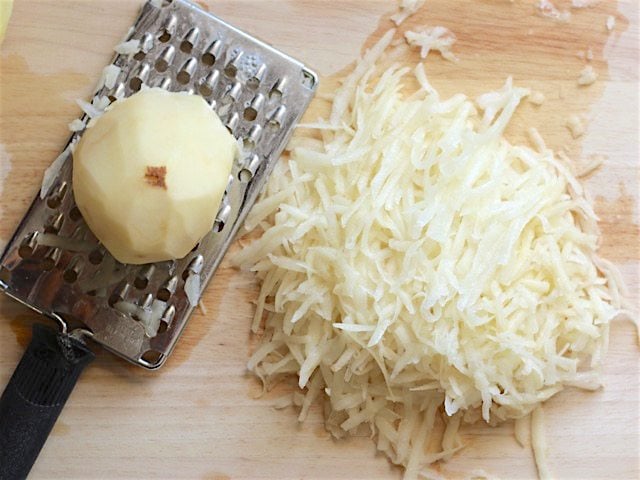 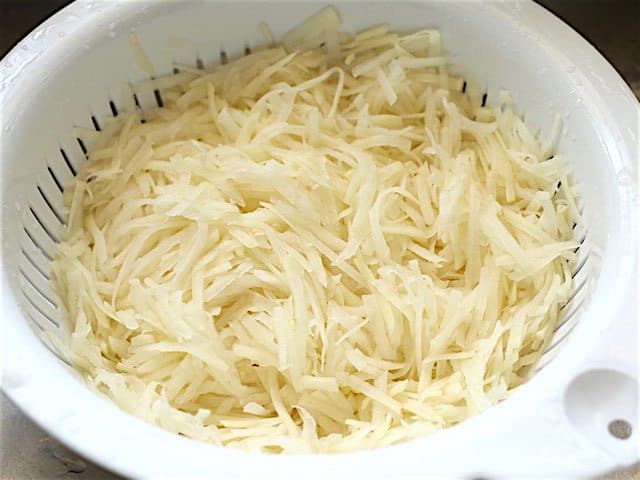 Place the shredded potatoes in a colander and rinse them really, really, really well. The water running from the colander should be clear. Then, let them drain. 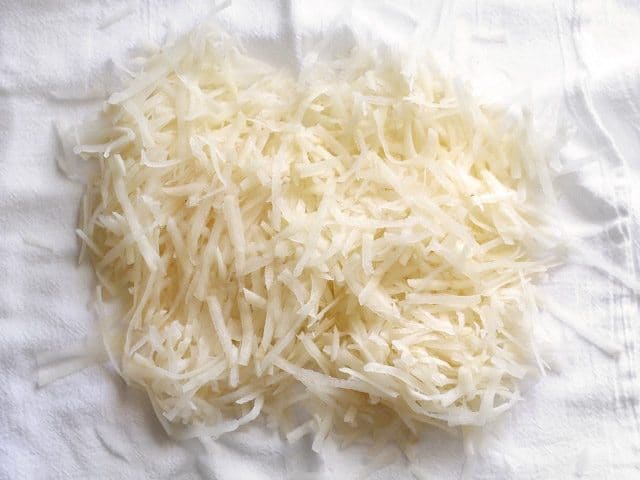 Making sure the potatoes are as dry as possible is key to keeping them crispy. If they have too much water on them that water will turn to steam while they cook and basically steam the potatoes and make them soft. So, you can either let them drain a long time in the colander, squeeze them dry with your hands, or roll them up in a clean, lint-free towel and press them dry. I chose the towel method. 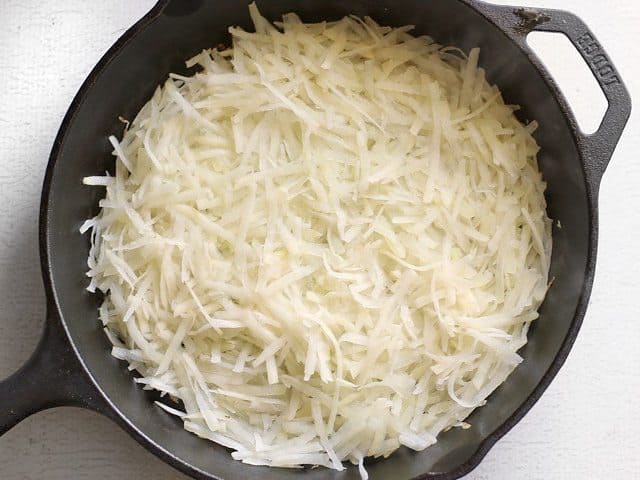 Heat a large cast iron or non-stick skillet over medium heat. Once it’s hot, add about a tablespoon of oil. Spread the oil over the surface of the skillet, then add about 1/3 of the shredded potatoes, or enough to cover the bottom of the skillet in a solid but thin layer (only about 1/2 inch thick). You’re shooting for maximum surface contact here, so if they’re packed in there too thick, some won’t touch the skillet… and they’ll generate steam again and make everything mushy. 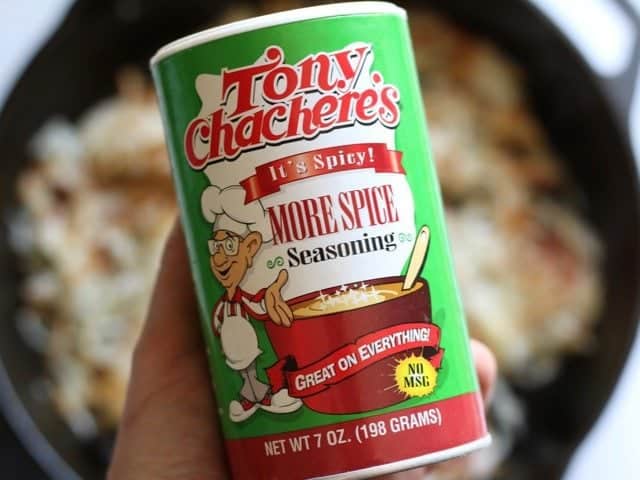 While the potatoes are cooking, sprinkle on a little seasoning salt. This is the kind I like because I live in Louisiana and we put it on EVERYTHING, but you can use whatever brand you like. I love the little bit of extra flavor and kick that seasoning salt adds to the crispy hash browns compared to just plain salt and pepper. 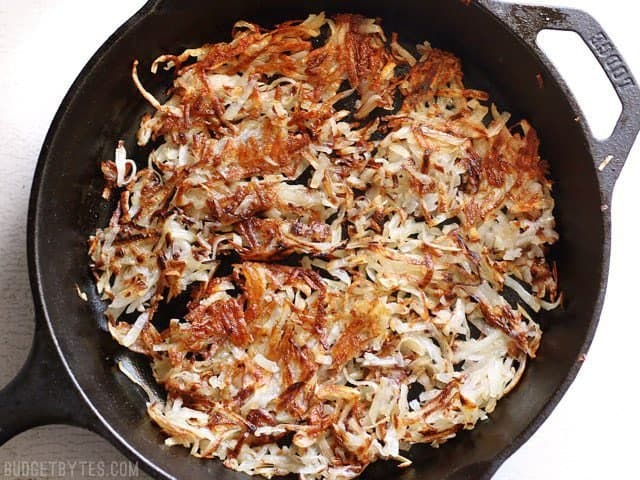 Now, the key here is to not touch them long enough for them to get really nice and brown and crispy. If you mess around with them, stirring or flipping too often, they won’t form a nice crust and the long strands will kind of break down. So, LEAVE THEM BE. :) Then, once they’re very golden, flip them. You might need to drizzle on a little more oil at this point to help the second side crisp up. Then, LET THE SECOND SIDE BE until it’s also golden and crispy. Now, depending on how many potatoes you have in the skillet, you may want to flip and cook one last time to get most of the potatoes crispy, but that’s up to you. Some people like a 50/50 ratio of crispy to soft, some people like almost all crispy. 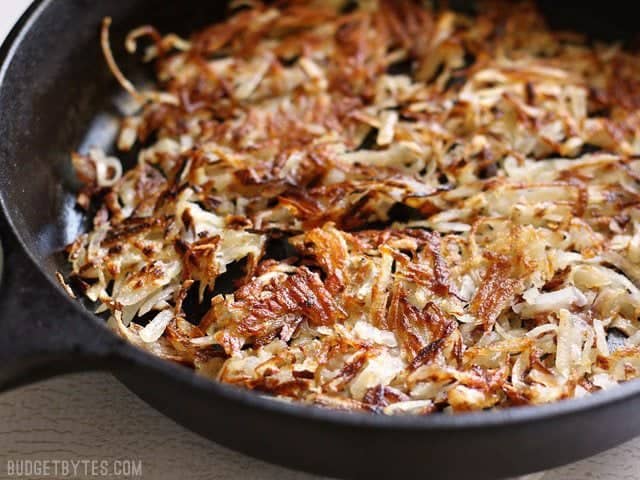 Once you get the ratio of crispy/soft that you like, it’s time to move on to the second batch. Remove the cooked crispy hash browns to a plate, then repeat the process a couple more times, or until you’ve cooked all the potatoes. 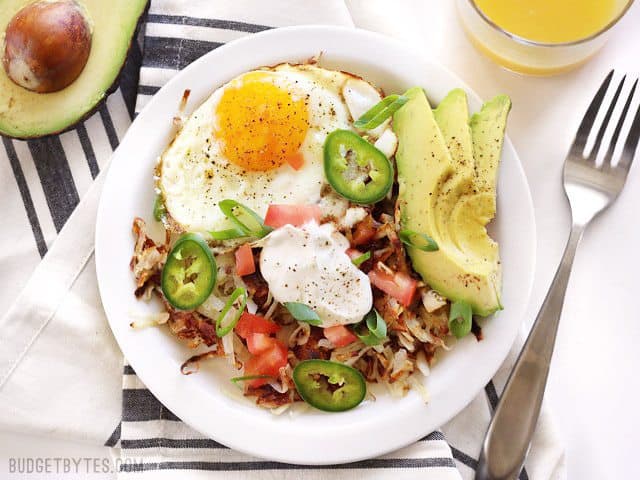 Hash browns are great on their own and all, but why not make them ULTIMATE by adding lots of yummy toppings? I did a fried egg, some avocado slices, diced tomato, sliced jalapeño, green onion, and a dollop of sour cream. Waffle House ain’t got nuthin’ on my hash browns. 😎

62 comments on “How to Make Crispy Hash Browns”