Last weekend I got an email from Robyn with a link to this really cool recipe over at Apron Strings. I love cooking pasta and rice in liquids other than water, so this idea for a one pot pasta dish (which is originally from Martha Stewart Living Magazine) was right up my alley! 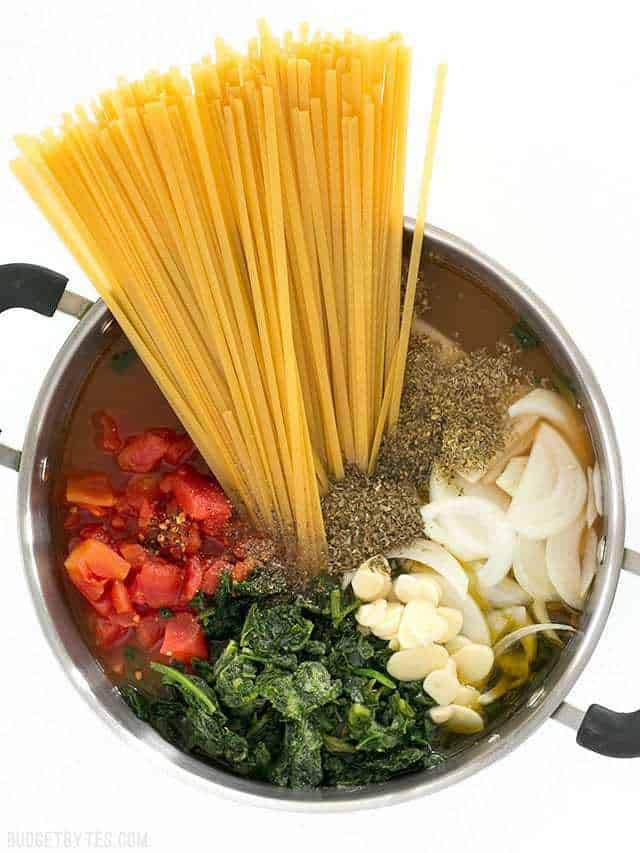 This dish is incredibly easy and super flavorful. The pasta cooks in a mixture of broth, herbs, and aromatics, like onion and garlic, which really ramp up the flavor. The starch that dissolves off of the pasta as it cooks helps create a thick sauce right in the pot. It’s magic! So fast, so easy, and SO flavorful. I do want to mention, though, that if you’re the type of person that can’t handle pasta any other way than al dente, you may not like this one. The pasta can get a little soft, if you let it cook even just a little too long.

I made a few changes to the original recipe, as usual, to fit my needs. First, instead of using fresh basil, which can cost an arm and a leg, I used frozen spinach for a pop of green and increased the dried basil to make up for the flavor. Second, I wanted more “stuff” in my pasta, so I used a larger can of diced tomatoes and reduced the amount of vegetable broth to compensate. Lastly, I added a light sprinkle of shaved Parmesan over top. Other great ideas for add-ins: mushrooms, parmesan, artichoke hearts, or olives.

I think next time I’ll save adding the frozen spinach until the end so that it will defrost and heat quickly from the pasta’s residual heat. That way the spinach will stay bright green and pretty, and it will not darken the pasta as it cooks. But hey, either way it tasted fantastic! 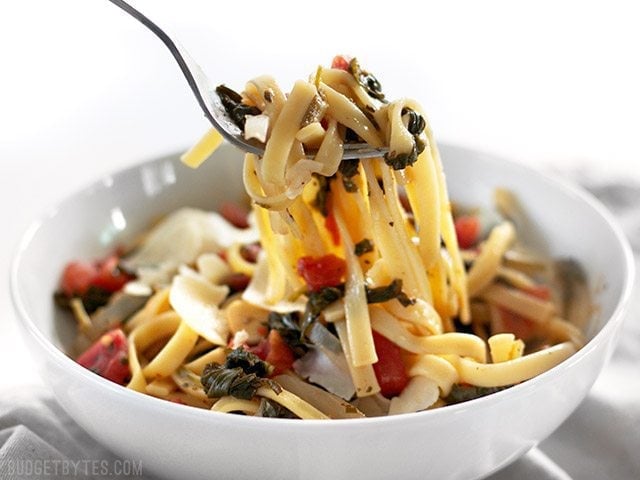 4.75 from 260 votes
All the ingredients for this Tomato Spinach One Pot Pasta cook together to make an incredibly fast, flavorful, and easy weeknight meal.
Author: Inspired by Apron Strings 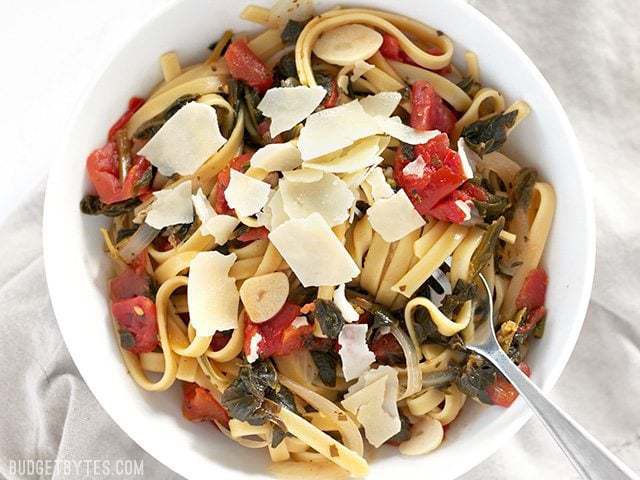 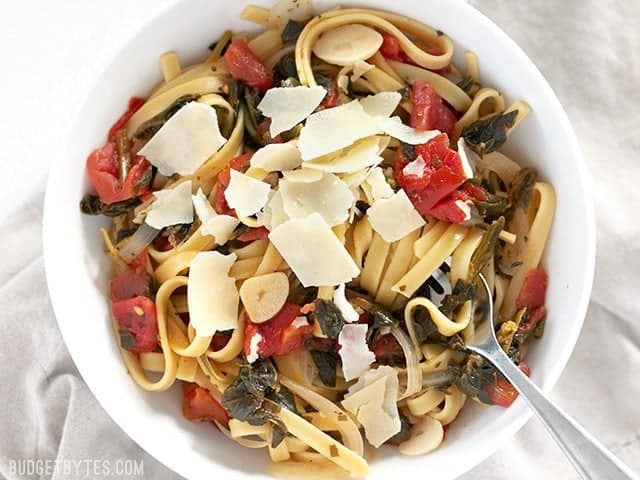 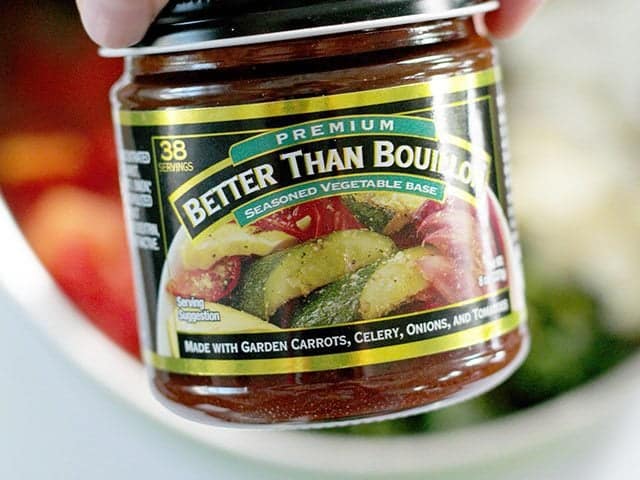 Start with four cups of vegetable broth. The flavor intensity and salt content of your broth will make a big difference in the end flavor of the pasta. If you use a low sodium broth, the pasta will taste bland. I use Better Than Bouillon soup base for all of my broths because it is really flavorful, much less expensive than boxed or canned broths, and I can mix up any amount needed. These little jars last forever in the refrigerator, too, so it’s there whenever you need it. And no, I am not being paid to endorse it. :) 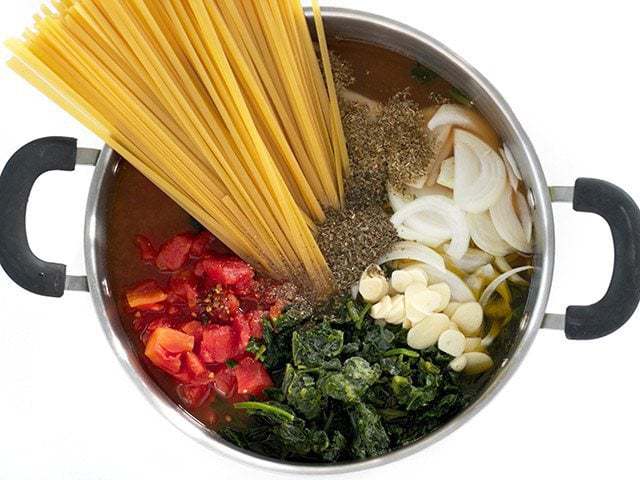 Add the four cups of broth to a large pot along with 12 oz. fettuccine, 2 Tbsp olive oil, 8oz. frozen spinach, a 28oz. can diced tomatoes (with the juices), 1 sliced onion, 4 cloves garlic (minced or sliced), 1/2 Tbsp dried basil, 1/2 Tbsp dried oregano, 1/4 tsp red pepper flakes, and some freshly cracked pepper. Although I show the fettuccine whole here, it’s best to break the pasta in half to help it fit in the pot and make it easier to stir later. 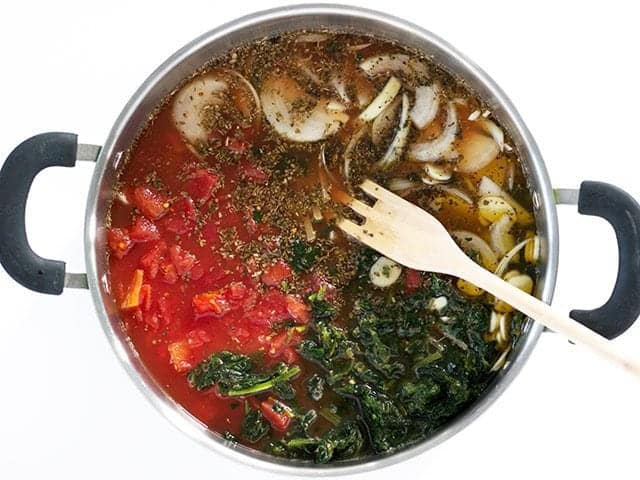 Briefly stir the pot and make sure all the pasta is submerged. Place a lid on the pot and bring it up to a boil over high heat. Once it reaches a full boil, remove the lid, turn the heat down to medium, and give it a stir. Make sure it’s still bubbling away when you turn the heat down. It needs to continue boiling for this to work. 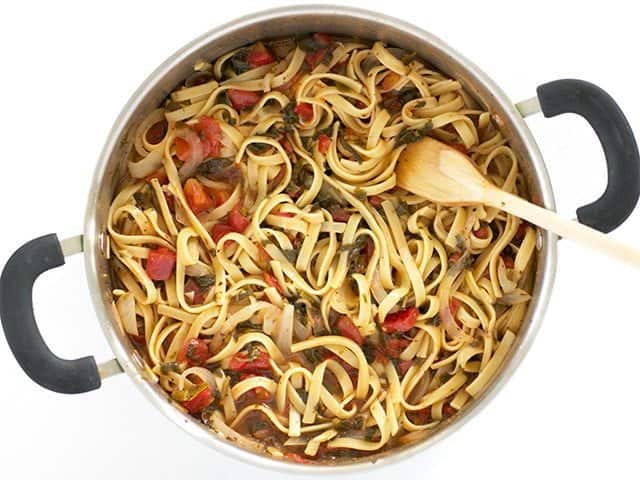 Let it boil for 10-15 minutes, or until the pasta is cooked and most of the liquid has been absorbed or evaporated. Only stir once every few minutes to keep the pasta from sticking. Over stirring it can make the pasta overly mushy and sticky. 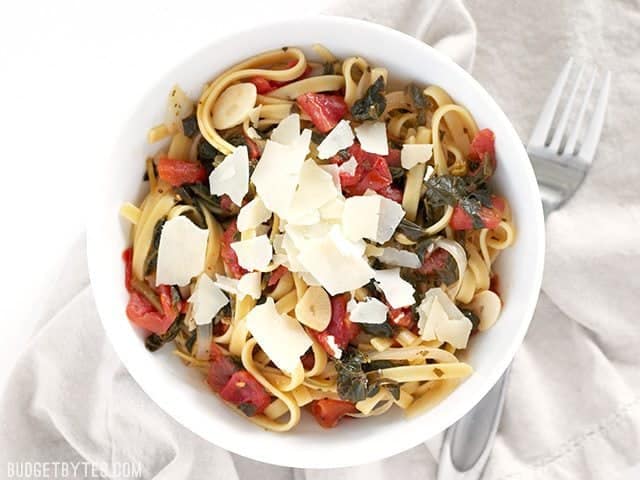 And then it’s done and it tastes amazing! Cool, huh? Sprinkle a little shaved Parmesan over top just before serving. This Tomato Spinach One Pot Pasta deserves a cape for being so amazing. That bowl was gone in 60 seconds. 👅