True story: every time my boyfriend and I go out to eat he will order Eggs Benedict if it’s on the menu. Every time. But I’ve never made it for him at home! I had only made hollandaise sauce once in the past and I remember it being quite tricky, so I always just saved that dish for special occasions when we go out. …Until now. I was craving Eggs Benedict like no other, so I decided to give it a shot again. And boy am I glad I did, because I was able to scale the recipe down for two and I found a simple method for the hollandaise sauce that is easy enough for a lazy Sunday morning. I’m calling this “Almost” Eggs Benedict because I used sunny side up eggs instead of poached. I like fried eggs 100x better than poached and they still have the runny yolk, so that’s all that is really important. ;) 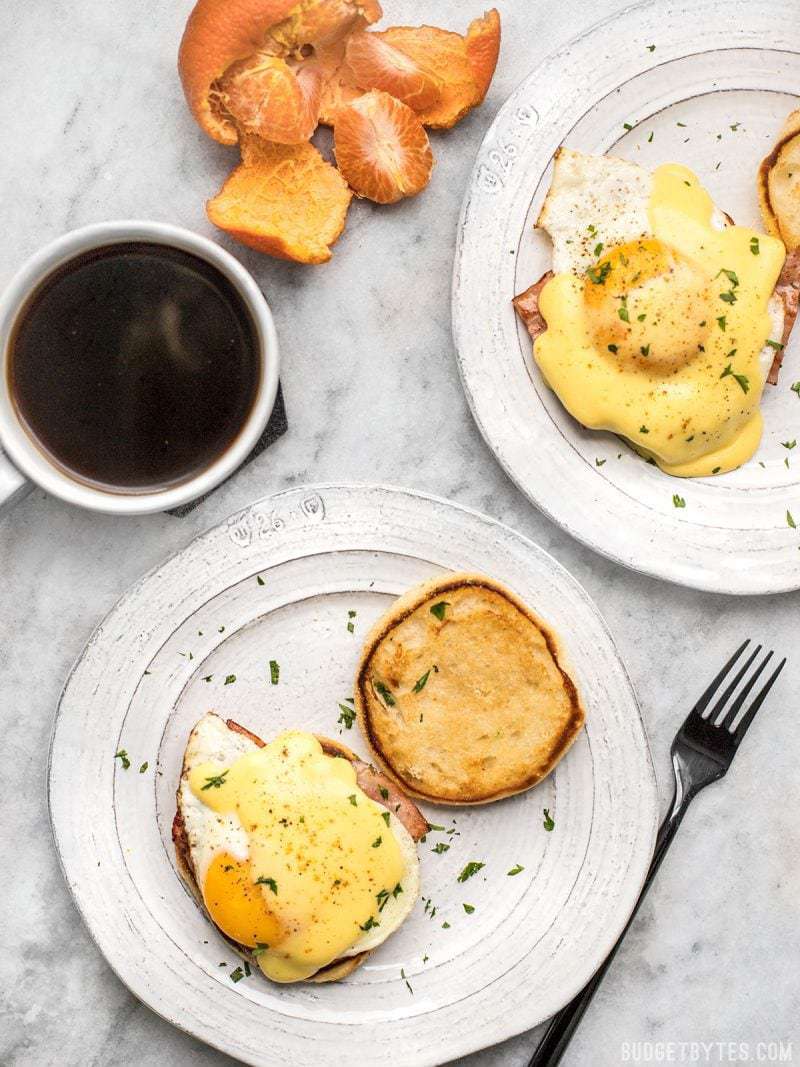 While I was giving myself a refresher course on how to make hollandaise, I kept coming across a super simple one pan method that totally intrigued me. I gave it a shot and sure enough, it was incredibly easy and worked like a charm. I used the one pot method below, but I don’t know who was first to discover this method or who to properly credit. Just know that this methodology is not my genius work. Many people also use the blender method for their hollandaise, which seems pretty fool-proof, but I don’t have a blender that would work well for that method, so I used the one pot. If you’re interested in the blender method, just Google “blender hollandaise” and you’ll find hundreds of tutorials.

Small Batch for the Win!

I scaled the hollandaise sauce down as far as I could (one egg yolk), but there was still a bit more than needed for two servings of this Almost Eggs Benedict. Depending on how much of this deliciously rich sauce you like, I think you could stretch this sauce over three, perhaps even four servings of Eggs Benedict.

REMEMBER: When an ingredient is listed as “divided” in an ingredient list, that means that part of it will be used for one step and the remainder for another step. :) 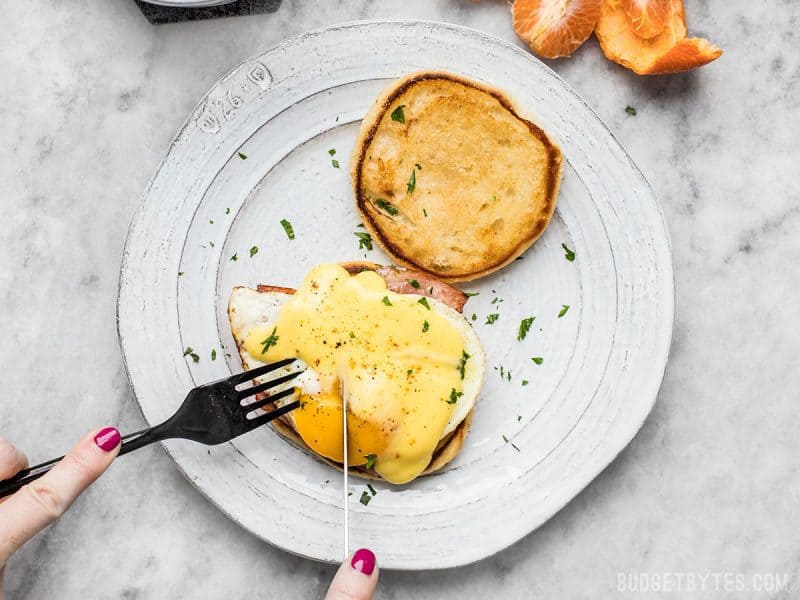 4.79 from 14 votes
Almost Eggs Benedict is the easy and approachable version of the brunch classic, scaled back and scaled down to feed just two on a lazy weekend morning. 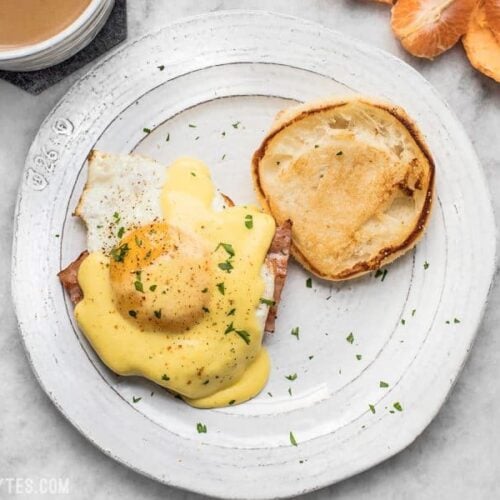 *I find that fresh lemon tastes a LOT better than bottled for this recipe, so I highly suggest using a fresh lemon. I like my hollandaise very lemony, but if you want it to be more mild, start with just 1 tsp lemon juice. **You can cook the remaining egg white that was separated from the yolk in the first step and add it to one of your Eggs Benedict! 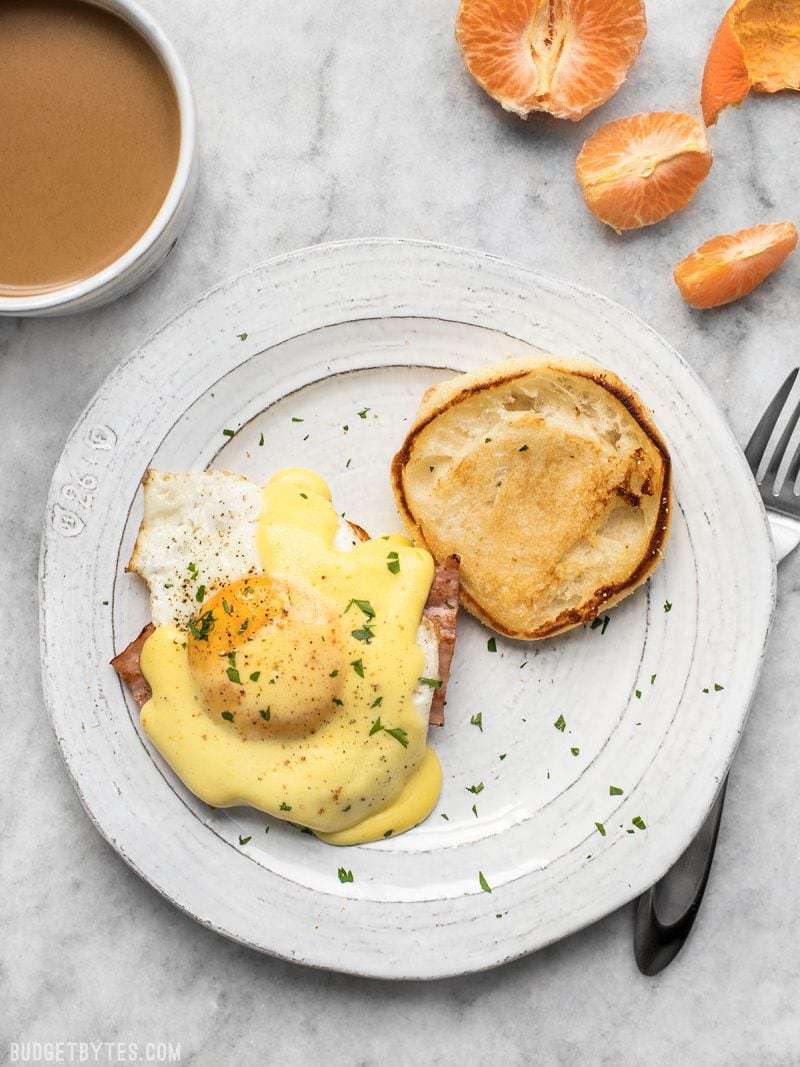 How to Make Eggs Benedict – Step by Step Photos 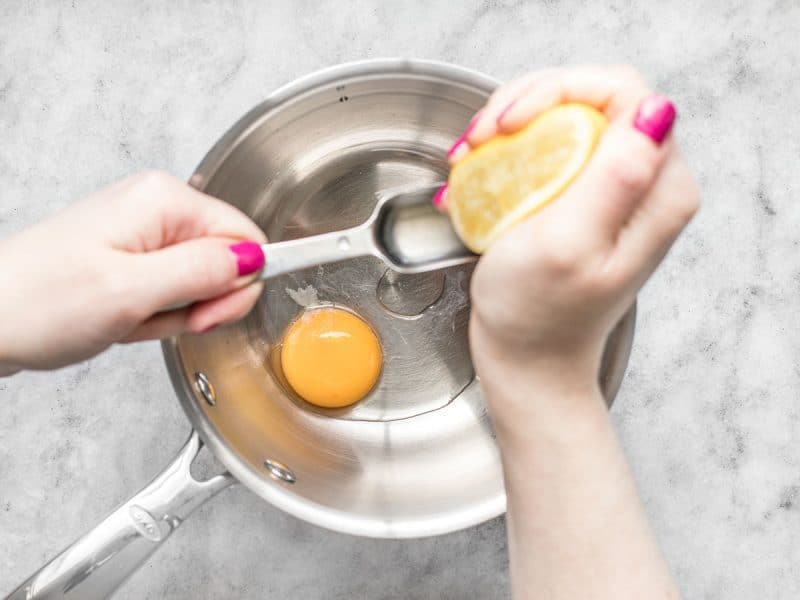 Start by separating the white and yolk of ONE egg. Place the yolk in a small sauce pot and add 1 Tbsp water and about 1/2 Tbsp fresh lemon juice (I like my hollandaise quite lemony, so if you don’t, you can start with 1 tsp lemon juice). Whisk these ingredients together until smooth. The pot is not over heat at this point. 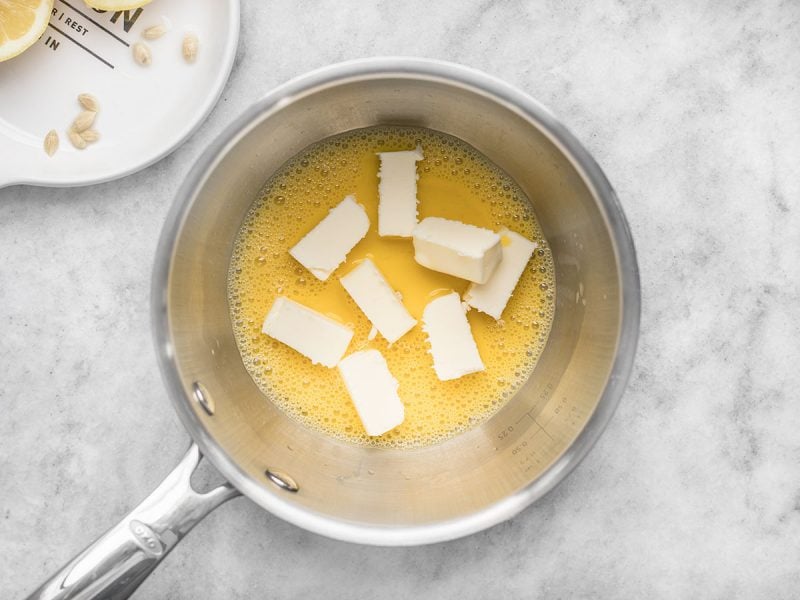 Cut 4 Tbsp butter into 1/2 Tbsp chunks. Place the butter in the pot with the egg yolk, water, and lemon juice. 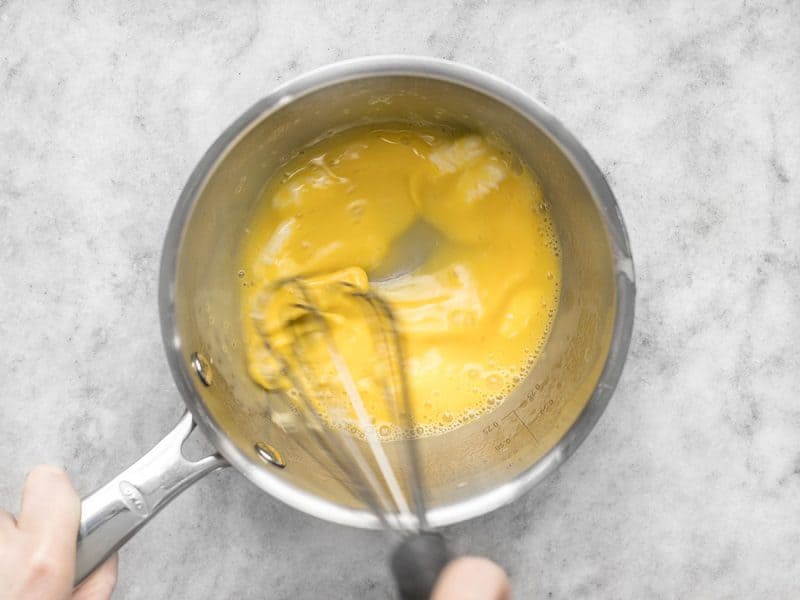 Place the pot over LOW heat and begin whisking continuously. The butter will slowly melt and as it does the whisking will emulsify it into the yolk and water. 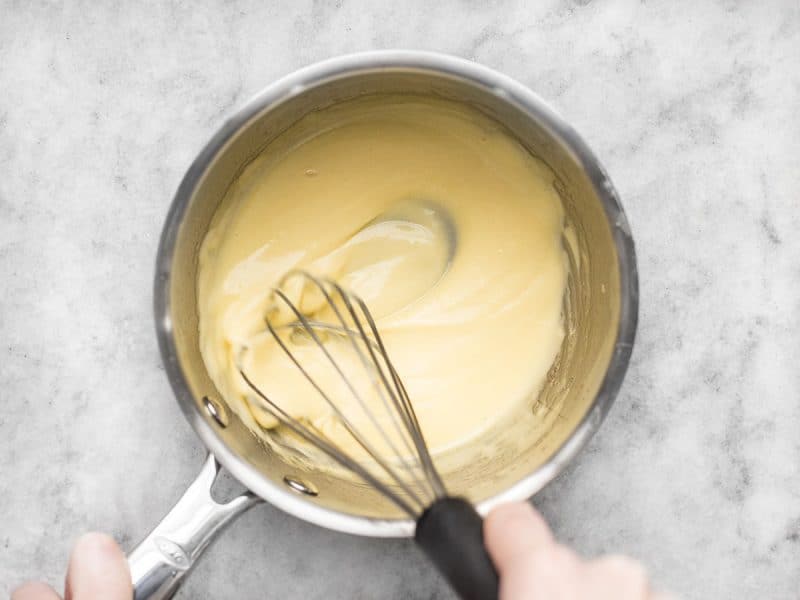 Once the butter is fully melted, just KEEP WHISKING over low heat. What will happen next is that the mixture will continue to heat up and the yolks will finally begin to cook and solidify. Because the yolk is emulsified into tiny droplets with the butter, it will actually thicken the sauce into a beautiful velvety mixture. The sauce will look frothy first, then as it thickens it will become silky smooth. 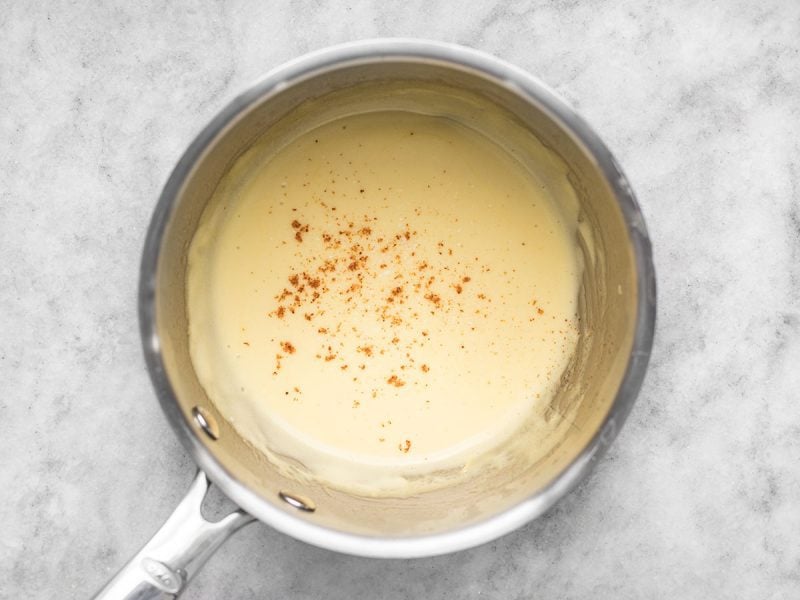 Remove the hollandaise sauce from the heat when it becomes thick, but still pourable. Add a pinch of salt and a pinch of cayenne pepper. Give it a taste and adjust anything else as needed (if you want more lemon, you can whisk it in now). 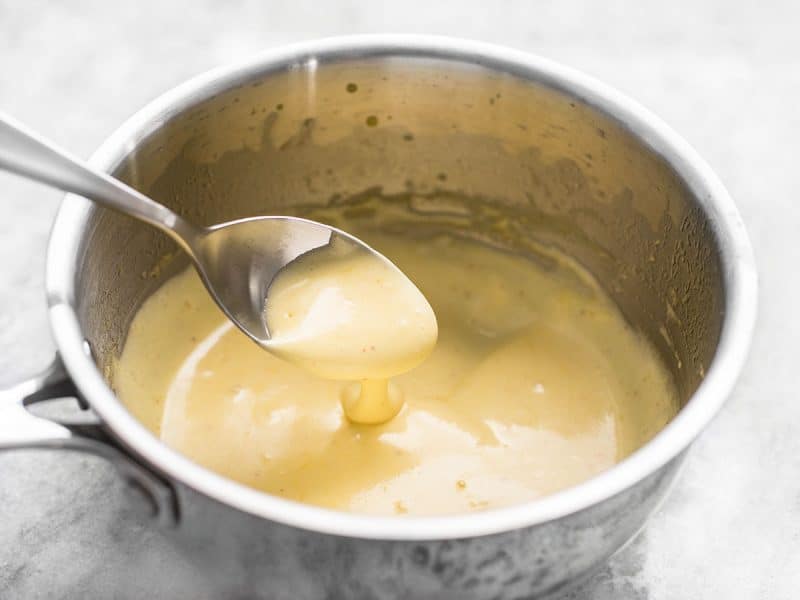 And now you have a glorious, silky, lemony hollandaise sauce! Place a lid on the pot and set the pot near where you’ll be cooking the eggs and things to help keep it warm (but do not place it directly over heat). 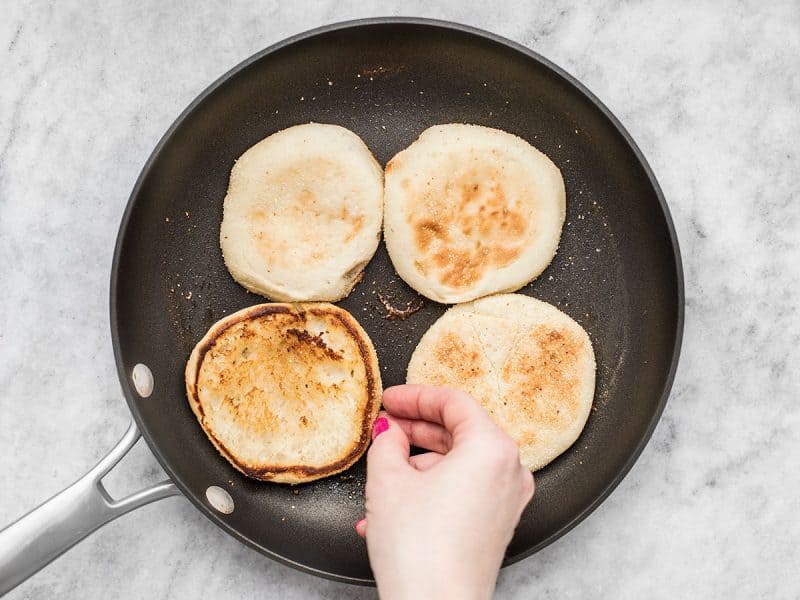 Place 1 tsp butter in a large skillet and place it over medium heat. Once melted, tilt the skillet to coat the surface in butter. Open two English muffins and place them cut sides down in the skillet. Cook until browned and crispy in the butter, then flip and cook for a couple minutes more on the other side. Remove the cooked muffins to a plate. 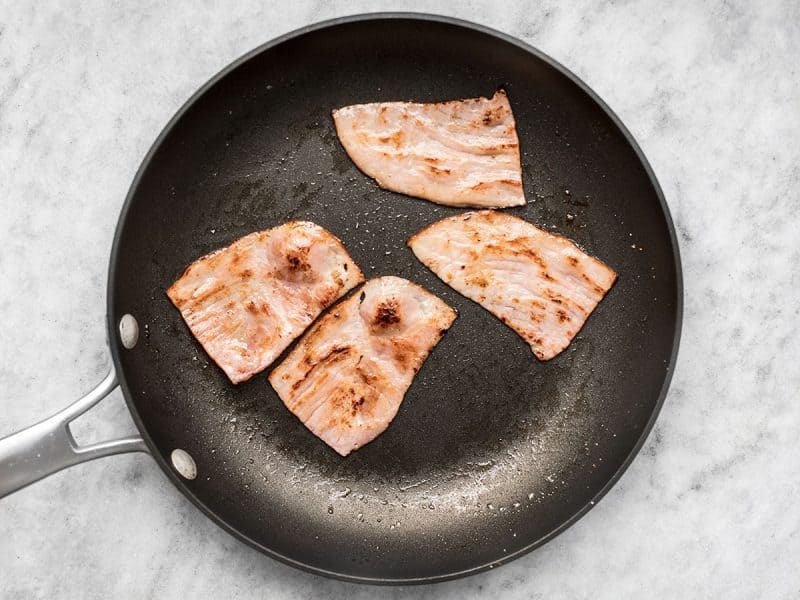 Wipe out the skillet to remove the cornmeal, then add another teaspoon butter. Add your ham slices (I had two long slices and cut each in half to fit the English muffins better) and cook until browned on each side. Place the cooked ham on top of the English muffins. 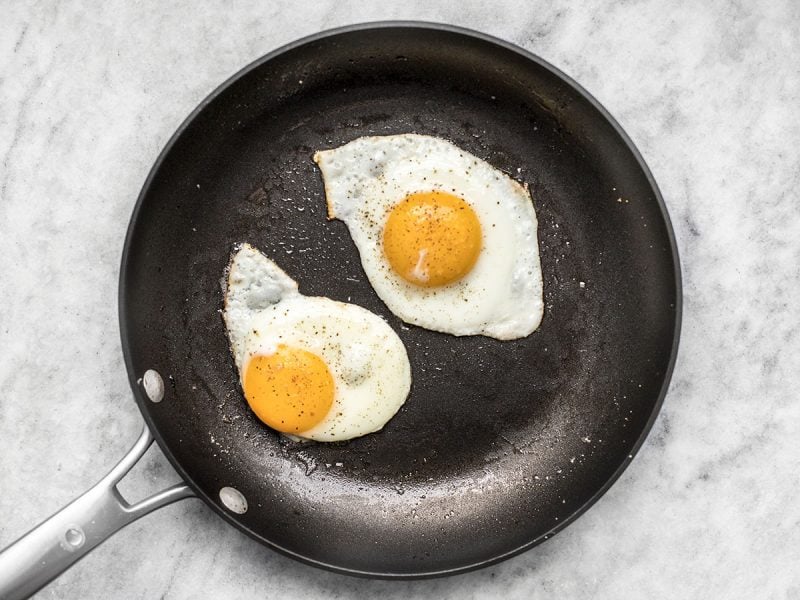 Add the final teaspoon butter to the skillet, then add your eggs. I like to cook mine over medium-low because I feel like it gives the whites time to cook through before the yolks cook. Either way, keep those yolks runny so you can have a  yolk and hollandaise party on your English muffins. 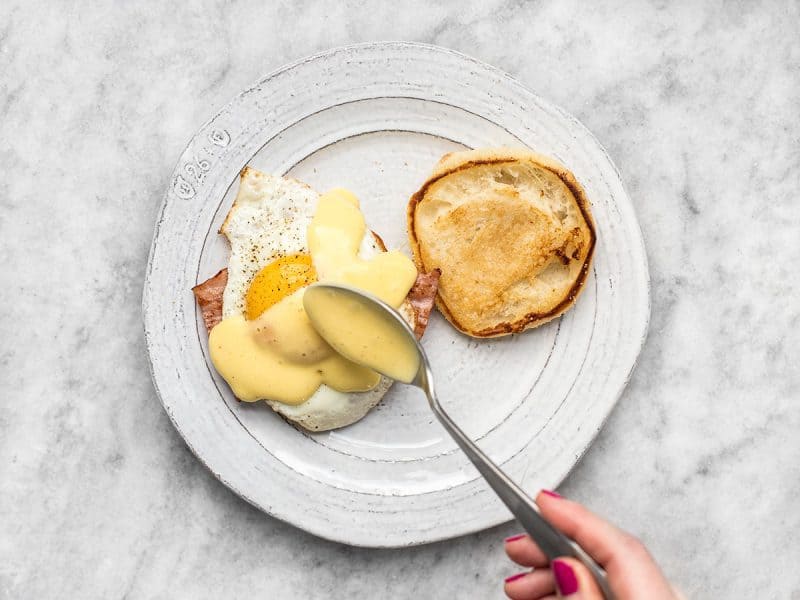 Top your English muffins and ham with the cooked eggs, then spoon the hollandaise sauce over top. WINNING. 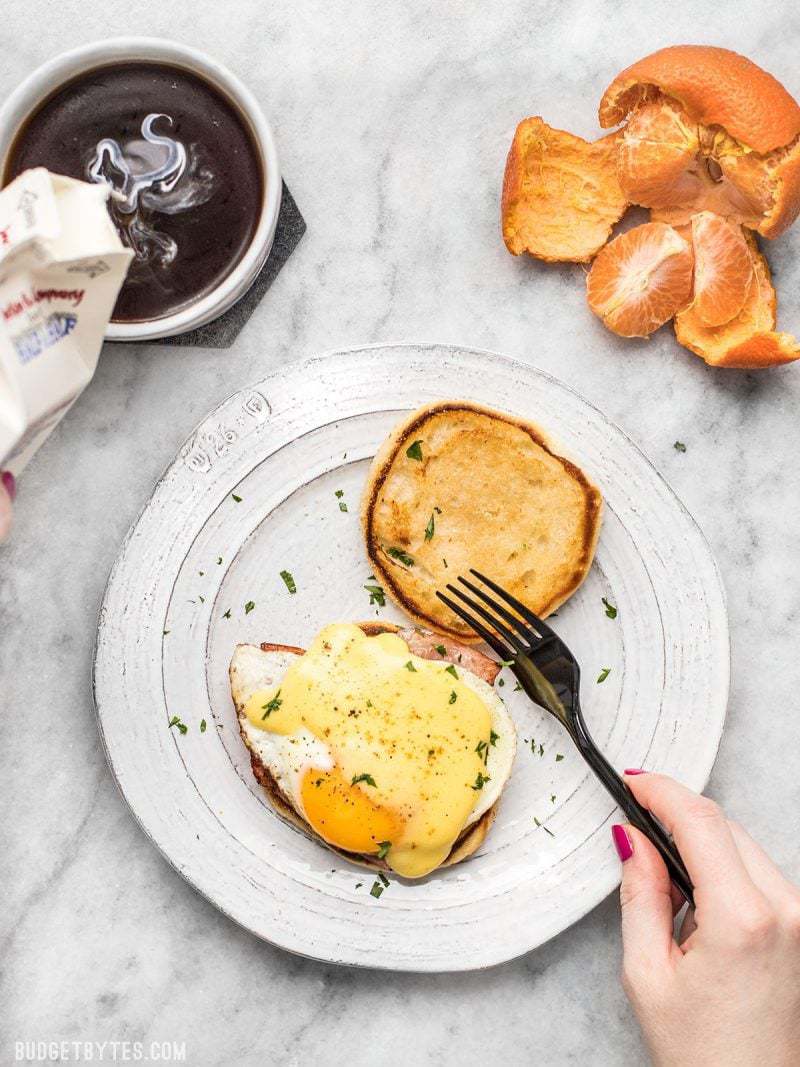 Now go enjoy your weekend because it’s already off to an AWESOME start!