Discovering that you can cook grains in other liquids besides water was one of my favorite “ah-ha” moments in cooking. Using broths, juices, or other flavorful liquids to cook dry grains adds more flavor than you could ever impart with herbs and spices alone. So, when I was cleaning out my cabinets the other day and found an old can of Trader Joe’s light coconut milk, I knew exactly what I was going to do with it. Toasted Coconut Oat Bran, of course. (Trader Joe’s has the best price I’ve ever seen on coconut milk, BTW.)

The catalyst to this recipe was a handful of shredded coconut that I had left over from my No Sugar Added Banana Nut Granola. I didn’t want to throw it away, but it really wasn’t enough to make anything with. The leftover shredded coconut happened to be sitting next to the oat bran and suddenly everything CLICKED. Cook the oat bran in the coconut milk and use the shredded coconut as garnish. Bingo!

Luckily it was a can of LIGHT coconut milk that I found, as full fat probably wouldn’t have quite enough moisture to really cook the oat bran. Oat bran usually takes about 3-4 parts water for every one part of oat bran, so I just supplemented the coconut milk with enough water to make up the difference. The result is an ultra creamy oat porridge that has great filling power. I left the Toasted Coconut Oat Bran savory and added sweetener to each bowl individually, based on what I was feeling that day. I tried brown sugar (classic), maple syrup (yum), and raspberry jam, which was my favorite. The slightly tangy berry jam made a nice contrast to the warm creamy oats. You gotta try it! 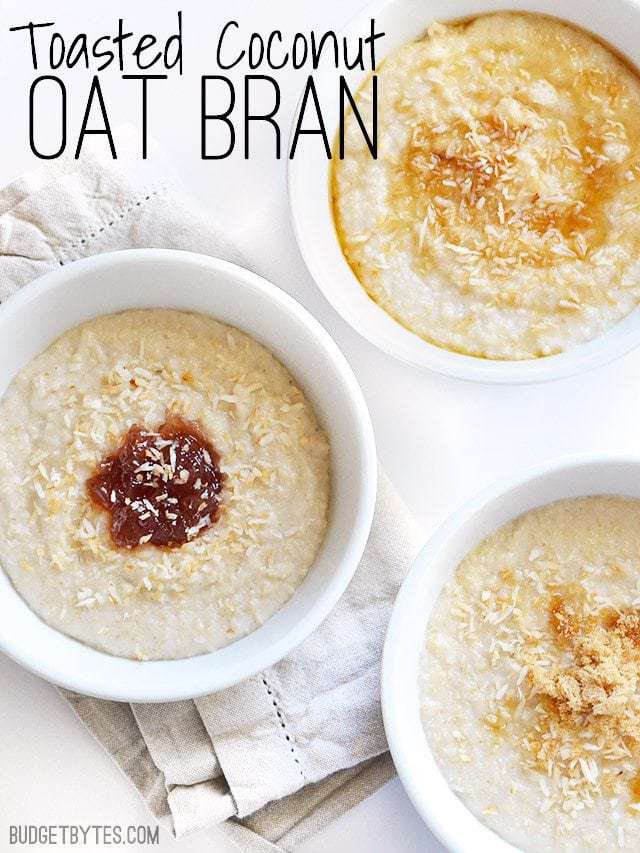 4.84 from 6 votes
Coconut milk is the secret ingredient to making this Toasted Coconut Oat Bran the warmest and creamiest bowl you've had for breakfast.
Author: Beth - Budget Bytes 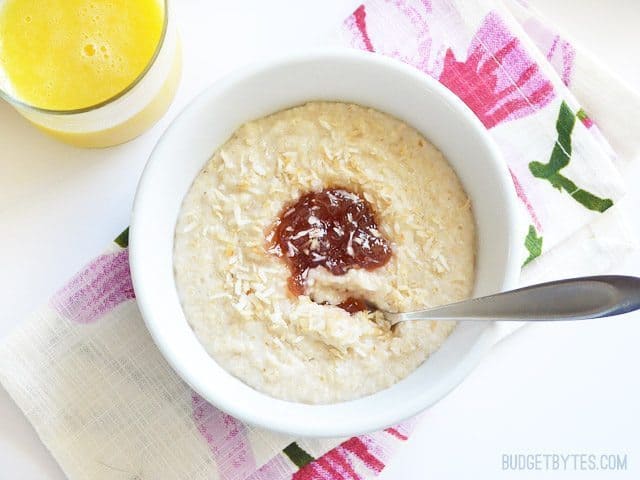 **If you don't have shredded coconut to use as a garnish, this still tastes amazing. 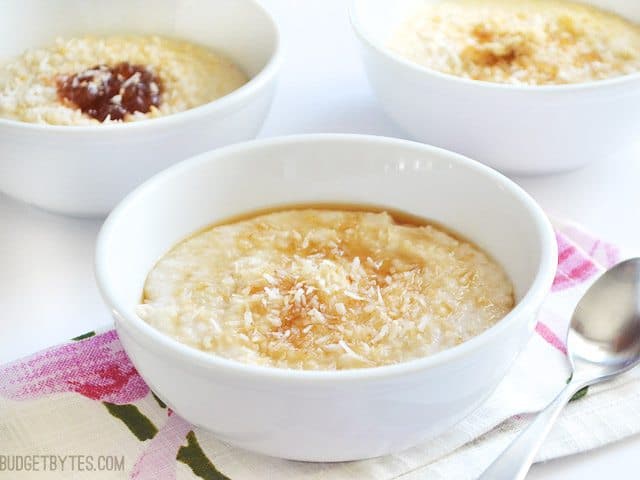 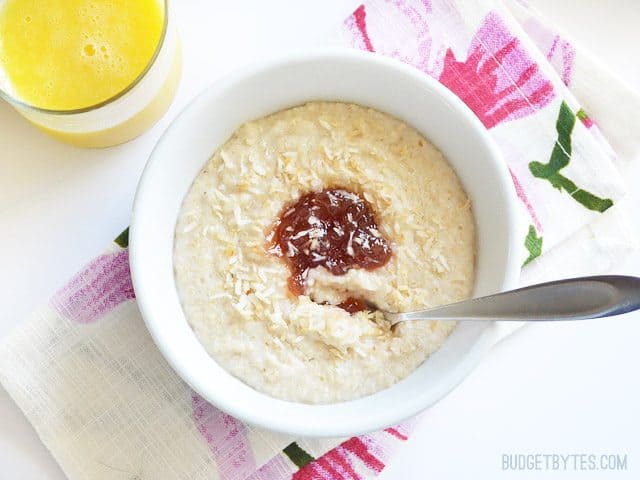 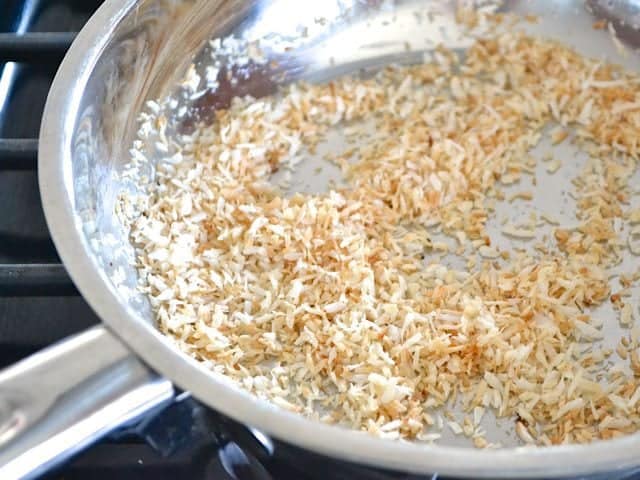 Start by toasting your coconut. This heightens the flavor and makes it very pretty (pretty IS important sometimes). I used about 1/4 cup because that’s what I had, but you can use more or less, it’s up to you. Place the shredded coconut in a dry skillet and cook over medium-low heat, while constantly stirring, until it’s golden brown like the photo above. Once it reaches that color, remove it from the skillet immediately to stop the browning (the residual heat in the skillet will keep cooking it otherwise and risk burning). 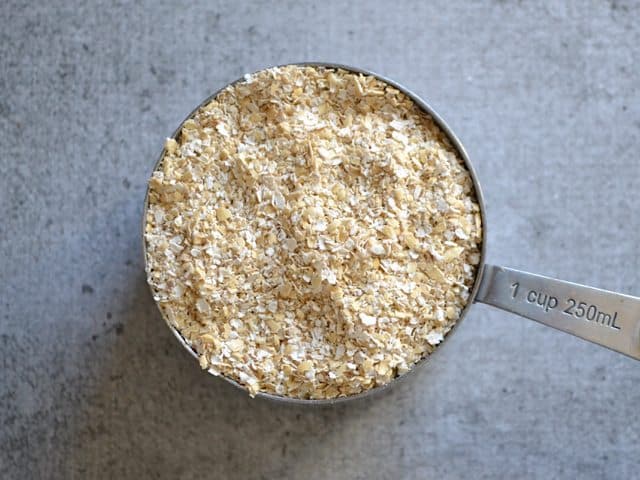 Use one cup of uncooked oat bran. Add that to a sauce pot along with… 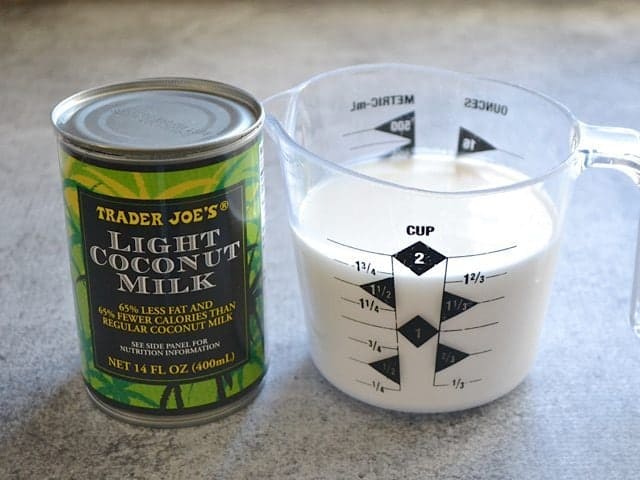 One 14oz. can of light coconut milk. Oat bran needs about 3 parts liquid to every part oat bran. The coconut milk was 1.75 cups, so I added an additional 1.5 cups of water (that makes 3.25 cups – an extra 1/4 cup liquid for good measure). 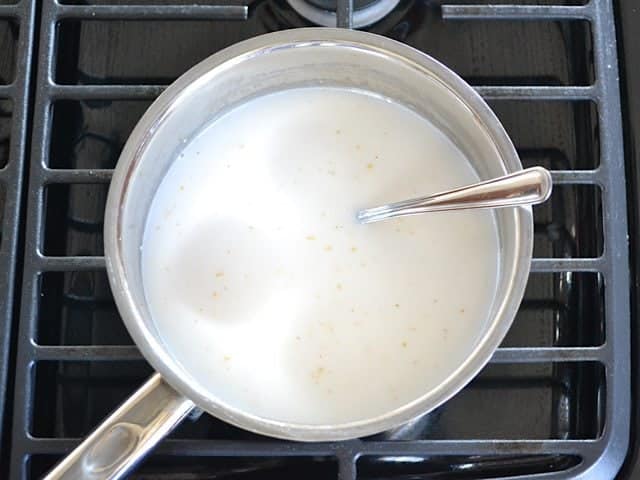 So in the sauce pot you have one 14oz. can of light coconut milk, 1.5 cups of water, and 1/4 tsp salt. The salt helps bring out the flavors just a bit and keep it from being bland. I sometimes like to add an extra pinch of salt and make it more on the savory side. 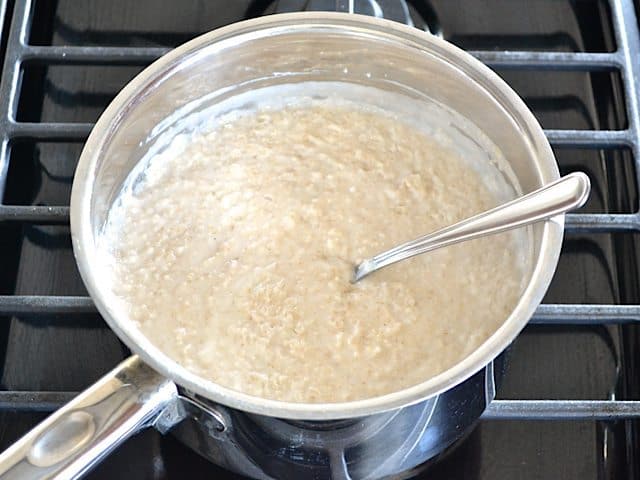 Cook the mixture over medium heat, stirring frequently, until it reaches a simmer and thickens. It doesn’t take too long. 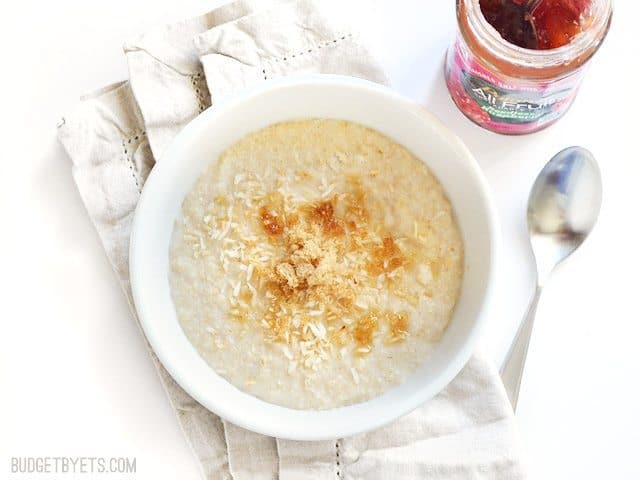 Divide the oat bran between four bowls, add the toasted coconut, and the sweetener of your choice (if desired). I kept the extra servings of the Toasted Coconut Oat Bran in the fridge and they reheated easily in the microwave. You could probably reheat them in a sauce pot on low if you add a smidge more water to help loosen it up.