I caught a few minutes of A Tree Grows in Brooklyn the other night and was reminded of how much I love stories like that and The Grapes of Wrath. They really make me thankful for every little thing I have and remind me that even if I feel like times are hard, I really have it pretty damn good.

Every now and then I get an email or comment that suggests my sparing use of meat is unrealistic or unreasonable. It’s true, I often treat meat more like a garnish than the main star of the meal, but stretching a small amount of meat out over many servings is not only realistic, but it’s a reality for many people around the world (past, present, and future). We’ve all become used to half pound burgers, but for cost and health reasons, I prefer to use just a little and make it go a long way. That’s my culinary style.

This recipe is a good example of that technique. I used only half of a 19oz. package (2.5 links) of sausage for this entire pot of pasta. When sliced thin, the sausage medallions distribue well into the dish and every bowl will have at least a few pieces. Cutting back on the meat helped offset the cost of the peppers, and bulking out the dish with pasta helped keep the overall cost low and my belly full.

Want to go heavy on sausage and light on the peppers? By all means, do. In this case the cost would have been about the same (since the peppers were a bit pricey), but I happened to prefer the peppers.

The flavor of this pasta is sweet, a little spicy, and a lot of yum. Dishes like this also freeze wonderfully, so don’t be afraid to make a big batch. You’ll be glad to have single serving portions tucked away in the freezer for those days that you don’t want to cook! 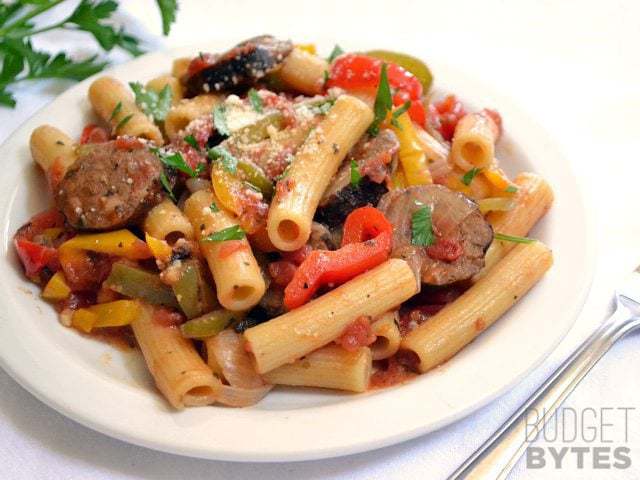 4.80 from 35 votes
This rich and flavorful Sausage & Pepper Pasta will fill you up, feed a crowd, and save you a dollar.
Author: Beth - Budget Bytes 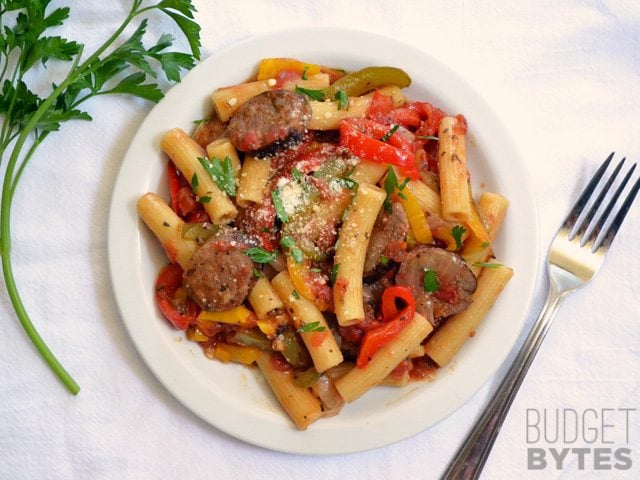 For a thicker sauce, use your favorite marinara sauce in place of diced tomatoes. You'll need about three cups. 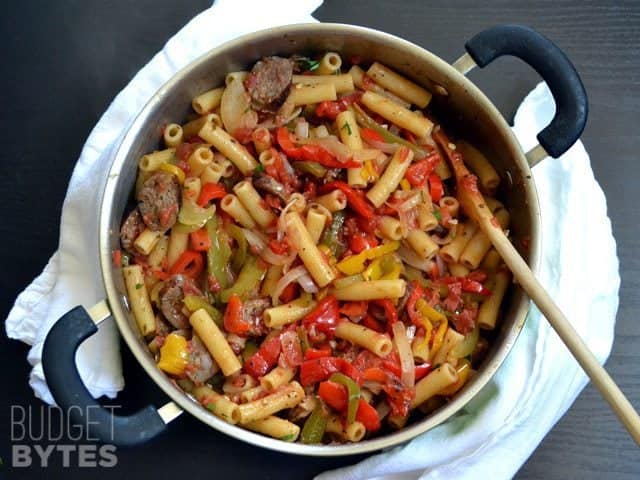 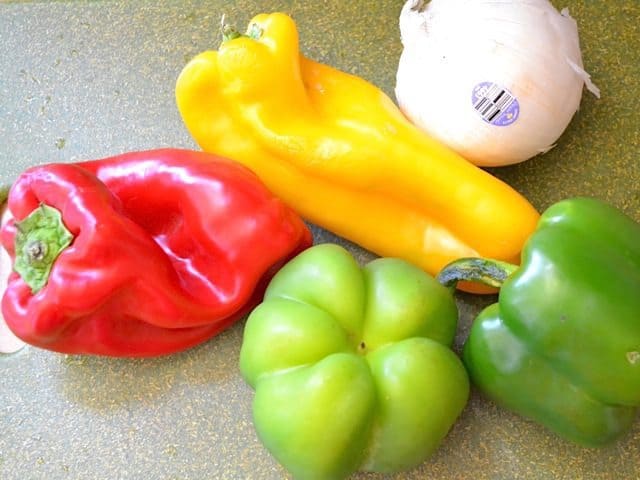 Green bell peppers are usually much less expensive than other colored peppers, so I try to use more of them and less of the others. You can also jazz this up by using an Anaheim pepper (slightly spicy) in place of one of the bell peppers. 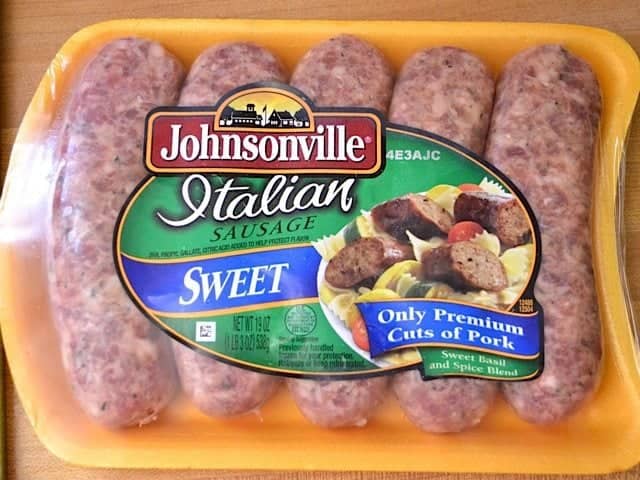 You can use any type of Italian sausage you like. I used sweet, but I would have also loved hot. If using hot, you may want to skip the crushed red pepper later. I only used half of this package and froze the rest. 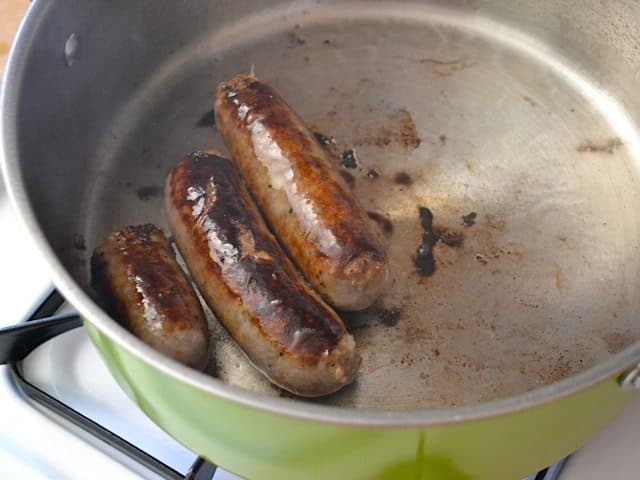 Cook the sausage in a large pot with a little vegetable oil until it is browned and firm enough to slice. It doesn’t have to be cooked through at this point because it will be cooked more later. While the sausage is cooking, thinly slice the bell peppers and onion, and mince the garlic. 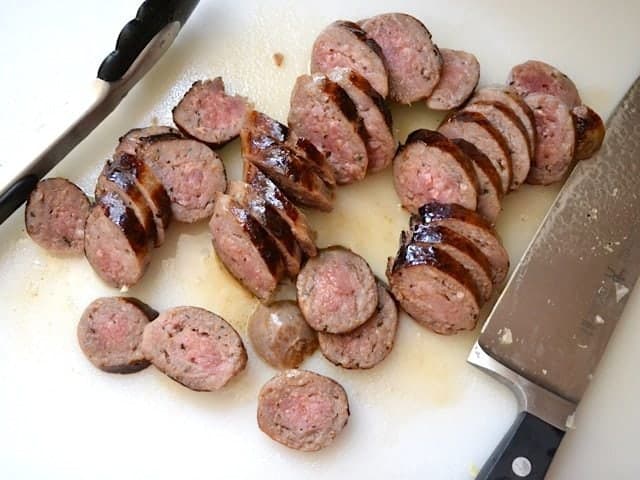 Once the sausage is nicely browned, remove it from the pot. Thinly slice the sausage. The thinner it is sliced, the greater number of medallions, and the more pieces you’ll have in every bowl. 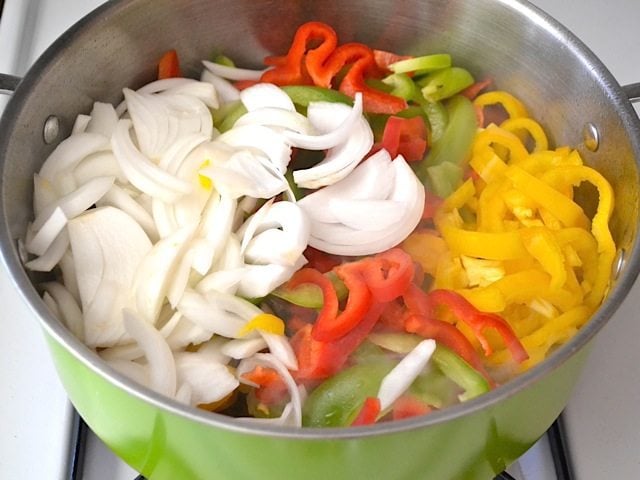 After removing the sausage from the pot, add the sliced bell peppers, onion, and garlic. Let those cook (stir occasionally) while you’re slicing the sausage. 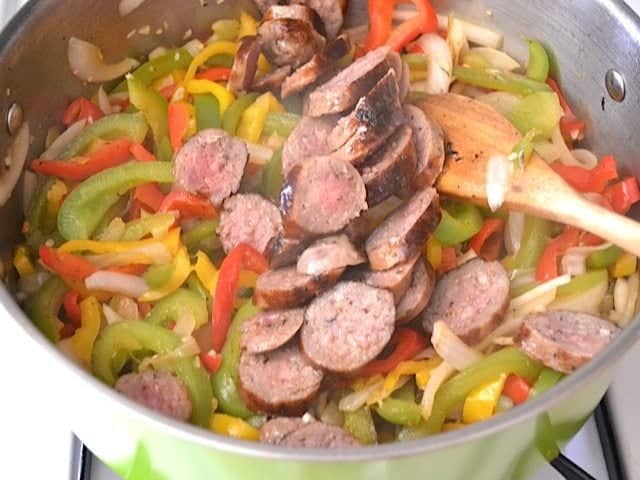 Return the sausage to the pot. Stir it in and continue to let everything cook. You can begin to cook the pasta in a separate pot at this point too… Make sure to not over cook the pasta, as you’ll want it to absorb some of the liquid after it is added in with the sausage and peppers. 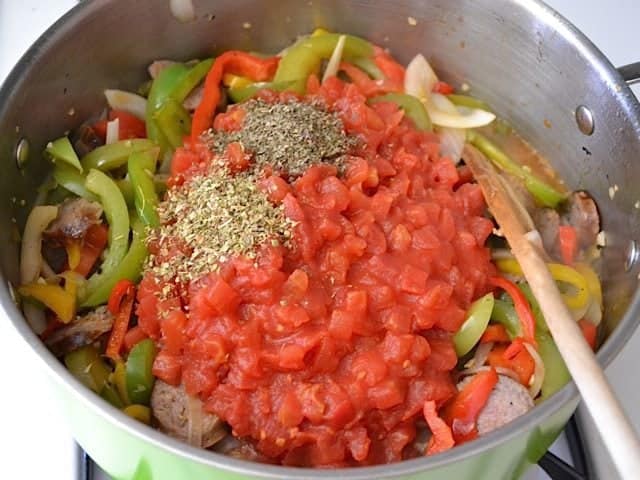 Now add the diced tomatoes, basil, oregano, and crushed red pepper. Stir everything to combine and keep cookin’. (you can use marinara sauce in place of the diced tomatoes if you want a thicker, richer sauce). 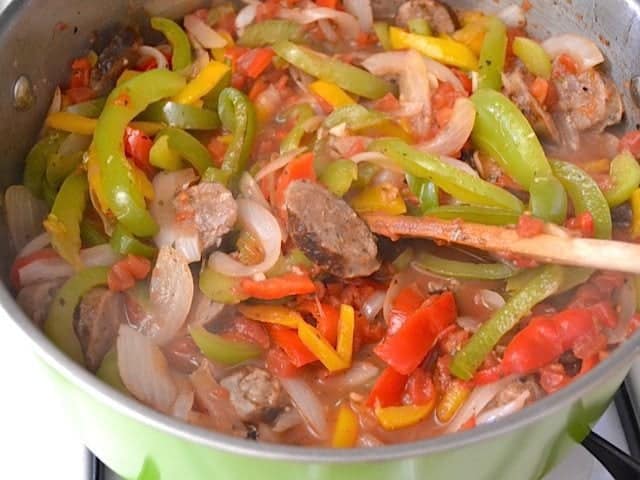 Let that cook while the pasta is boiling, so that some of the liquid evaporates away (see how it’s kinda soupy at first?). 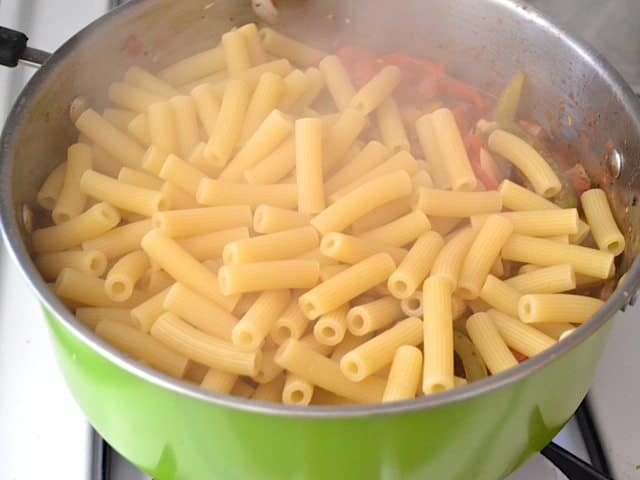 Finally, once the pasta is mostly cooked, drain it and add it to the pot with the sausage and peppers. Stir it to combine with the sauce, place a lid on top, and let it cook for 5-7 minutes more, so that the pasta can absorb some of the liquid and flavor. Add about a 1/2 teaspoon of salt, taste, and add more if needed. 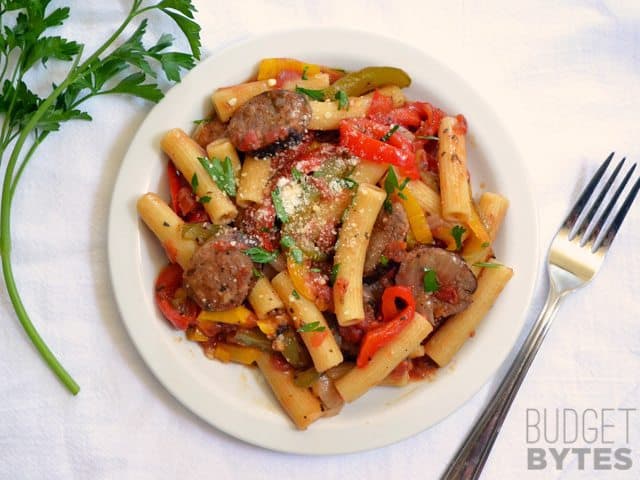