Two weeks ago we had a cold spell and I was all like, “I’M READY FOR PUMPKIN!” I bought mini pumpkins to decorate my kitchen, I bought some fall-scented candles, and watched pumpkin everything blow up on social media. Fast forward to today and, despite not even having reached October, I’m already over pumpkin.

That being said, I have to do at least one pumpkin recipe every year, so I’m going to do it now and get it over with. This is the last time you’ll hear me talk pumpkin this year ( <— total lie). I’m usually a fan of savory pumpkin recipes more so than sweets, but I just happened to have all the ingredients for this Pumpkin Cheesecake Mousse on hand, so that’s what I whipped up today. Zero regrets, guys. ZERO. 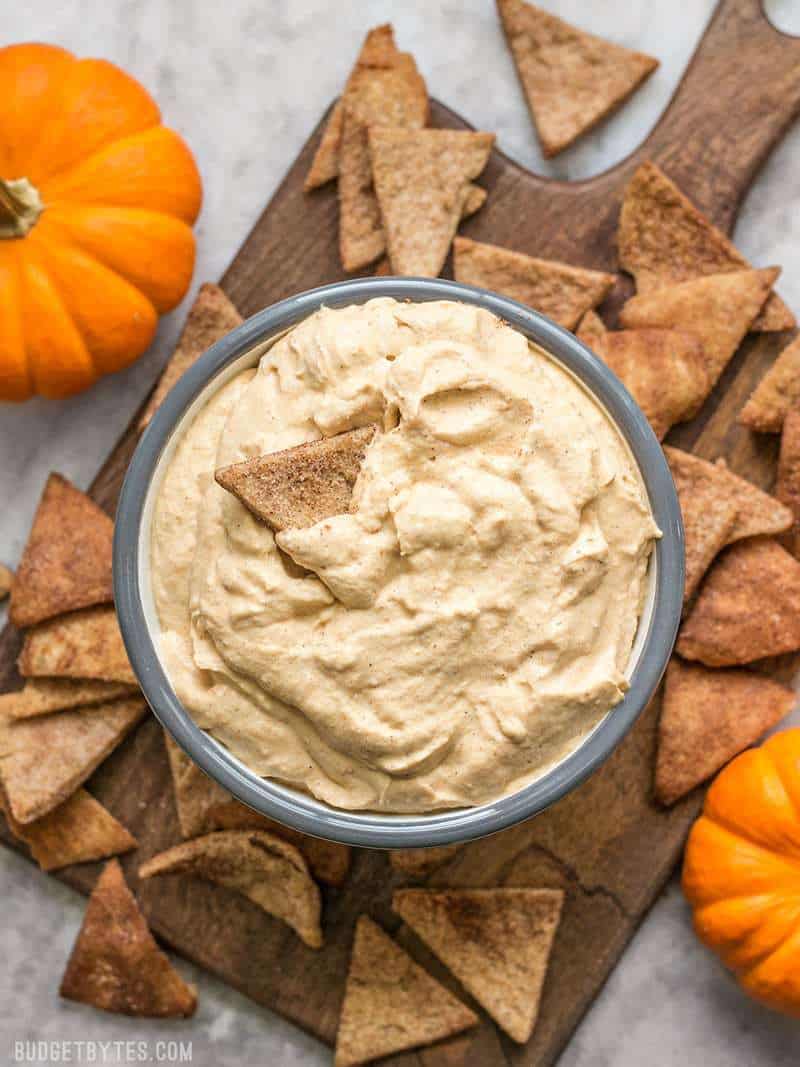 Can I Use Store Bought Whipped Cream?

Yes, if you want to take a shortcut, you can use store-bought whipped cream instead of whipping your own. But like, homemade whipped cream is way better. Just sayin’. ;)

How to Serve Pumpkin Cheesecake Mousse

This super light and fluffy Pumpkin Cheesecake Mousse can be eaten several different ways. You can use it as a dip for graham crackers, apple slices, or cinnamon pita crisps, you can make it into a parfait by layering it in a jar with crushed cinnamon graham crackers, or you can just say, “to hell with it” and serve it with a spoon and a side of Netflix. While the first two options make the prettiest presentation, the last option is probably my favorite. 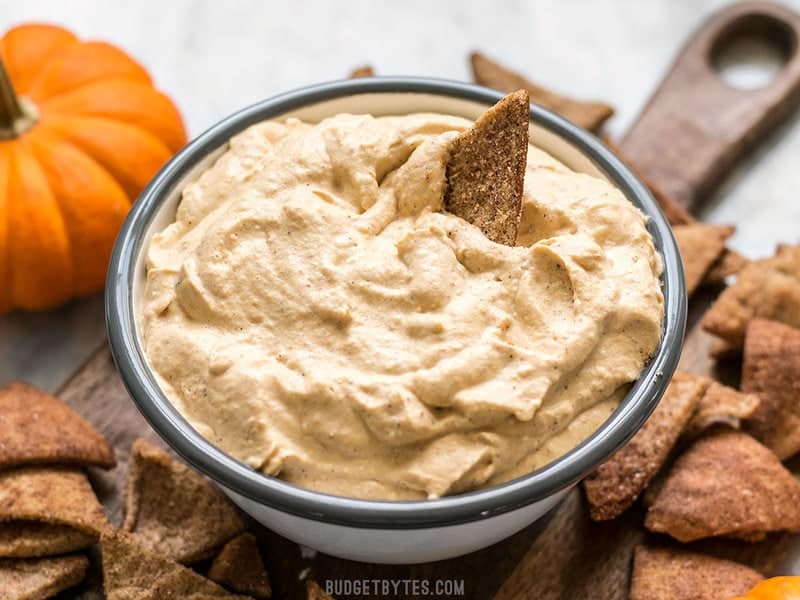 4.80 from 5 votes
This Pumpkin Cheesecake Mousse is a super light and fluffy dessert packed with fall spices and just enough sweetness to balance the pumpkiny flavor. 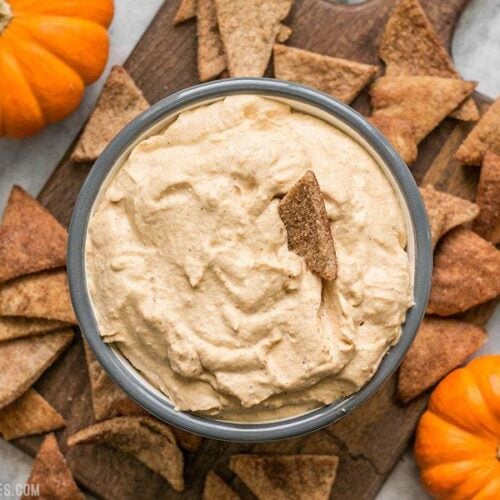 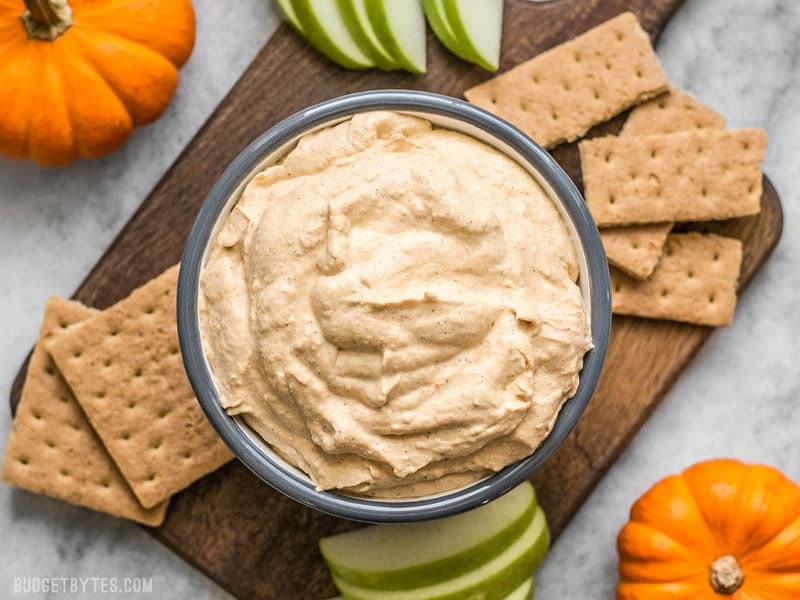 How to Make Pumpkin Cheesecake Mousse – Step by Step Photos 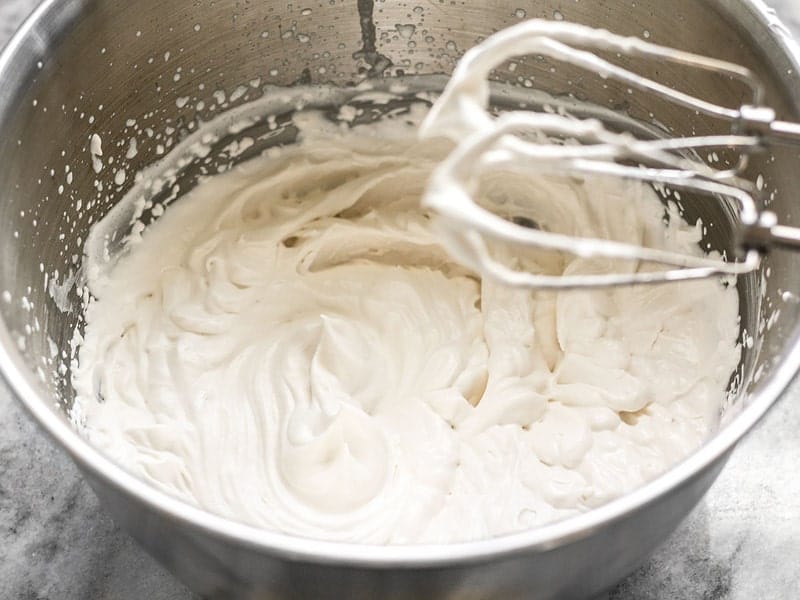 Begin by whipping 1 cup heavy whipping cream, 2 Tbsp sugar, and 1 tsp vanilla extract until stiff peaks form. I like to wait until the cream starts to thicken a bit before adding the sugar and vanilla. If you’ve never whipped cream before, “stiff peaks” means that when you lift the beaters out of the cream, the little peaks that are left in the bowl stand upright and do not slump over. Be careful not to overbeat the cream, though, because it can begin to break down and separate. 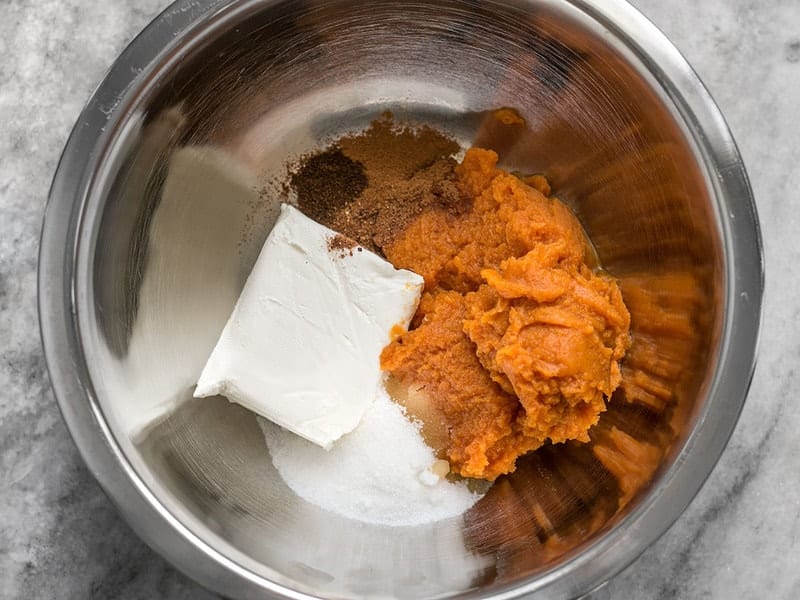 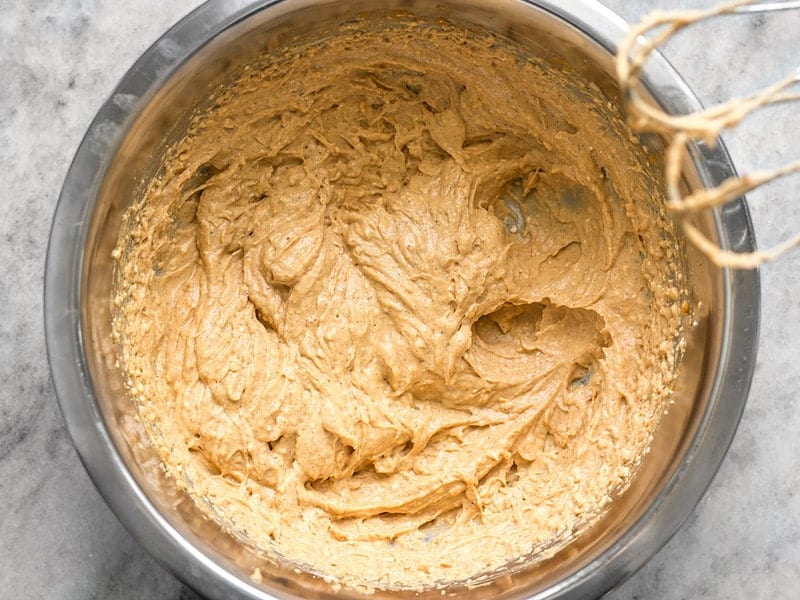 Beat the cream cheese, pumpkin, sugar, and spices together until they are smooth and no lumps of cream cheese remain (this is why it’s important to use room temperature cream cheese). 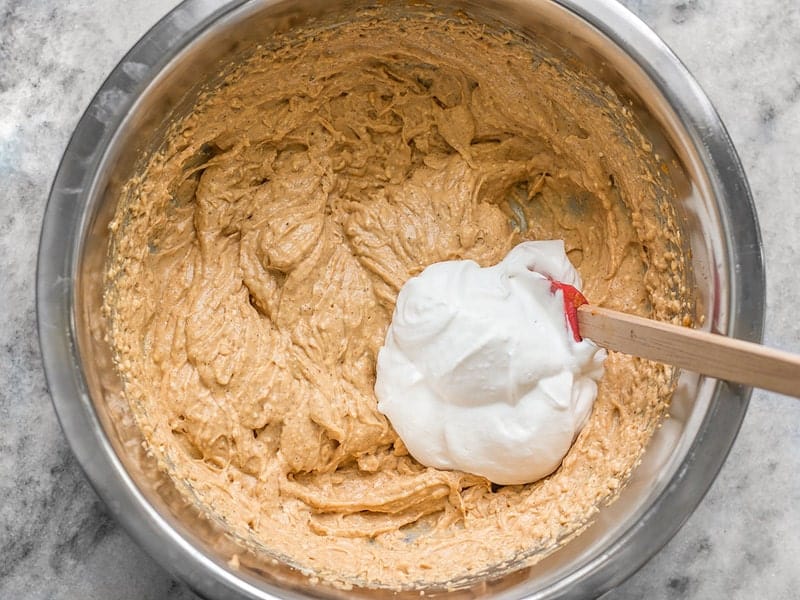 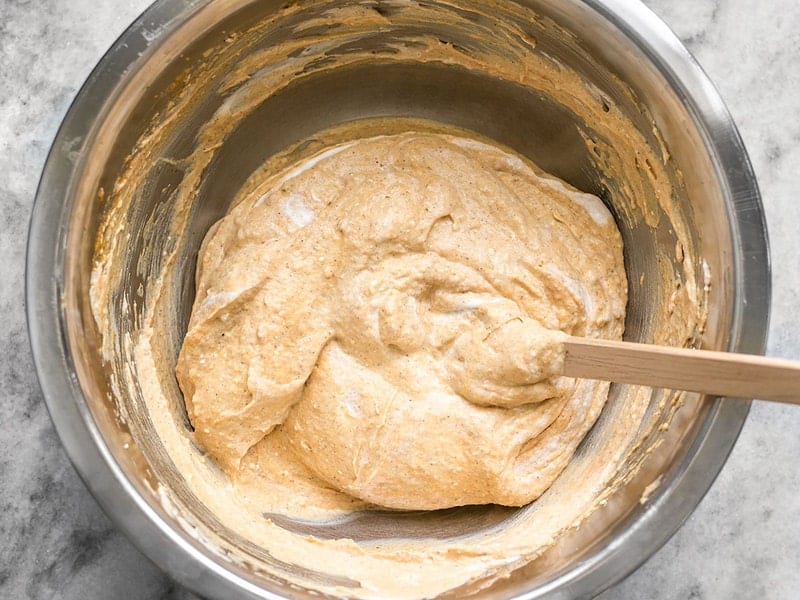 Now take 1/3 of that lightened pumpkin mixture and fold it into the bowl with the rest of the whipped cream. Make sure not to stir vigorously or you risk deflating your whipped cream. Just fold gently and watch the pretty swirls of orange and white. 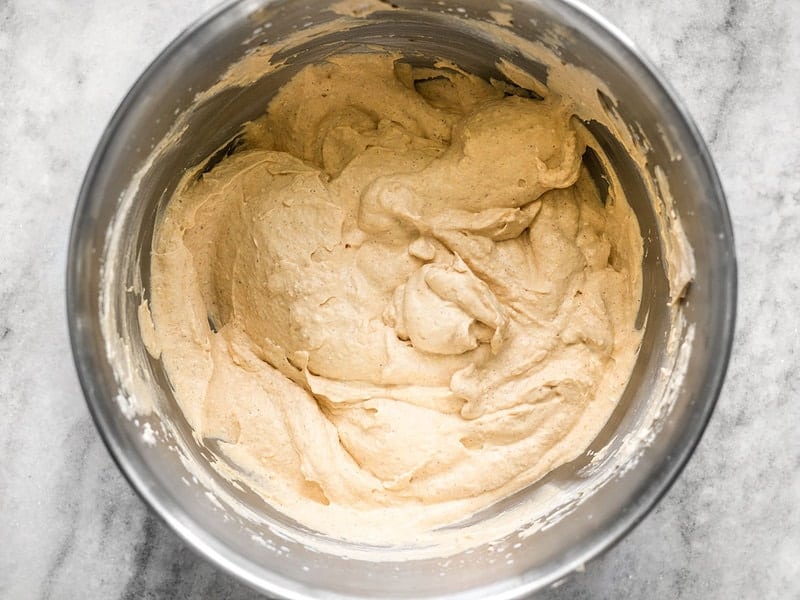 Repeat that two more times until all of the pumpkin mixture has been folded into the whipped cream. And that’s it! The Pumpkin Cheesecake Mousse is ready to eat! 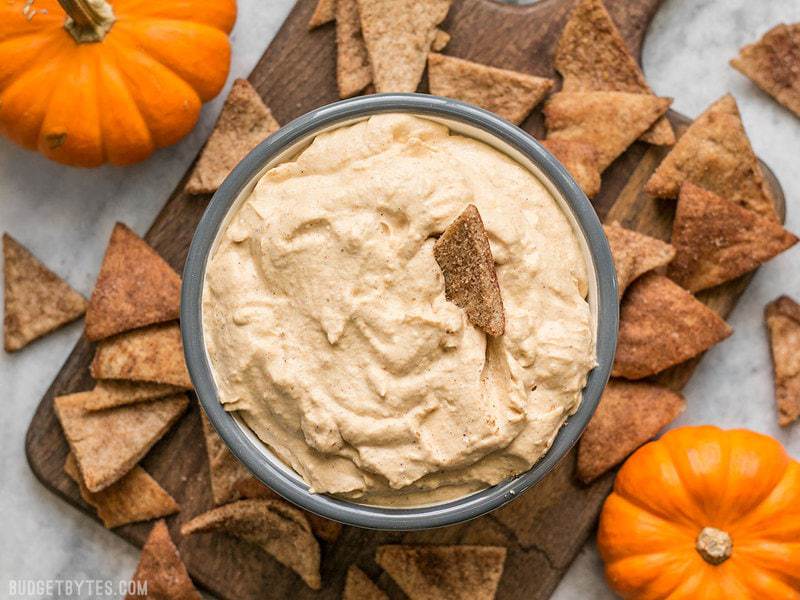 And while it really is good with these Cinnamon Pita Crisps, just give me a spoon already. It was REALLY hard to not just eat it all right away, but I think I like it even more after chilling a bit!