I discovered Mujaddara probably about ten years ago at this little Lebanese lunch spot in Baton Rouge, called Serop’s Express. I didn’t know what the brown mixture was, but I ordered on a whim and I was instantly in love. The soft grain-like mixture was earthy, flavorful, and had an intoxicating blend of seasoning. I immediately googled the recipe, determined to make it myself. 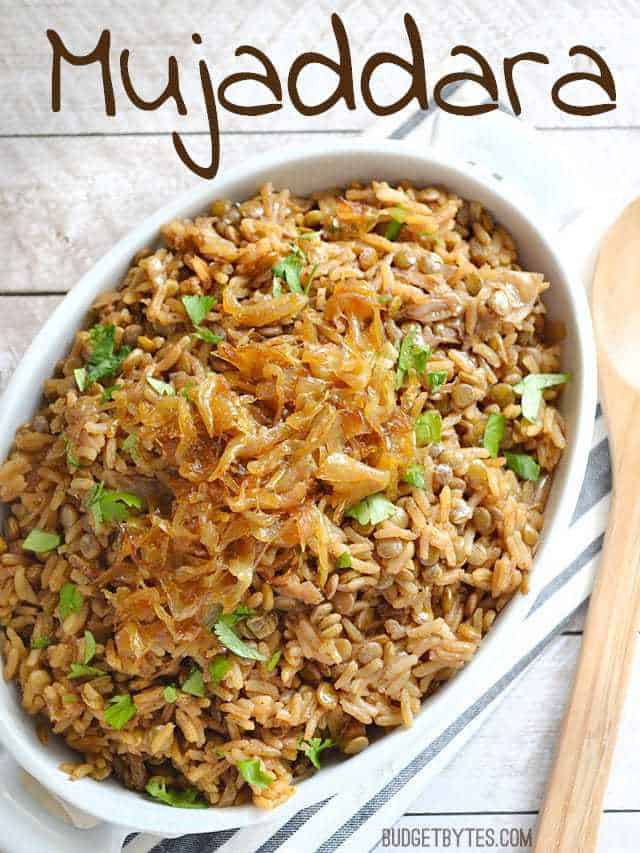 (I added chopped cilantro for garnish and to add color to the photo. Cilantro is not needed for the recipe.)

Mujaddara is a simple, filling, and flavorful Arabic dish made with rice, lentils, and caramelized onions. There are many ways to make it, with each region and family having their own spin, but the common thread among them all is rice, lentils, and caramelized onions. However it’s made, though, it’s usually extremely delicious, filling, and very inexpensive. So, in other words, it’s definitely a budget byte!

Despite trying several times over the past ten years, I’ve never been able to replicate Serop’s magic recipe. I’ve even had friends question members of the restaurant’s family about what’s in the dish, only to get the answer “rice and lentils”. *sigh*  I’ve had mujaddara at other Lebanese restaurants, but none of them compare to what Serop’s serves up. I don’t know what kind of magic they put in there, but it’s way more delicious and intoxicating than just rice and lentils.

The version I finally settled on is as close to Serop’s as I can get. It has plenty of caramelized onions to give it a deep, rich flavor, vegetable broth to make the flavor a little more complex, and a healthy dose of aromatic spices to keep things interesting. This recipe makes a big batch of about 6 cups, but this recipe will freeze very well, so any leftovers can be saved for later.

What to Serve with Mujaddara

I’ve been eating mine plain in a bowl, but it goes great with sautéed greens, roasted vegetables, or even topped with a fried egg. It’s kind of one of those all-purpose dishes that can be eaten at almost every meal. No wonder it’s been around so long!

As you can see, I’ve played around with the basic mujaddara concept quite a bit here, so you may want to try an authentic recipe first. Plus, you’ll probably get to learn a lot about this dish’s rich culture and history while you’re at it. Here are some great authentic mujaddara recipes to try: 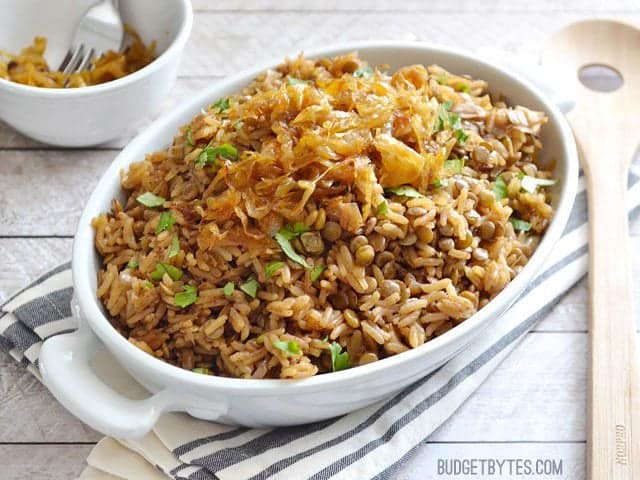 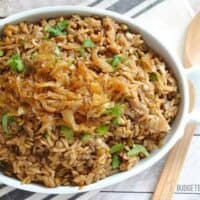 If your vegetable broth is low sodium or sodium free, you'll likely need to add some salt when cooking the rice and lentils. Taste the broth before setting the pot to boil and add salt as needed.
See how we calculate recipe costs here.
Tried this recipe?Mention @budgetbytes or tag #budgetbytes on Instagram!

How to Make Mujaddara – Step by Step Photos 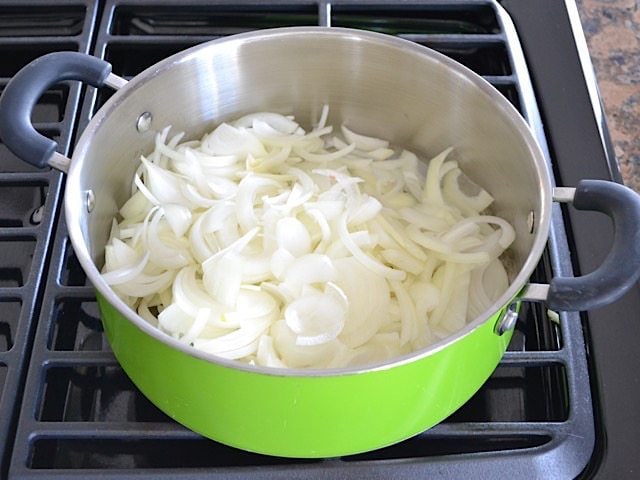 This recipe starts with caramelized onions, which lend a lot of flavor to the final pilaf. They take a long time to make, but are well worth it. Begin by thinly slicing four yellow onions and adding them to a large pot with 2 Tbsp olive oil. Cook the onions over low heat, stirring frequently for one hour. You can stir less frequently at first, but will need to keep a closer eye towards the end. I did chores around the house during the first part, remembering to walk back into the kitchen every few minutes to stir. 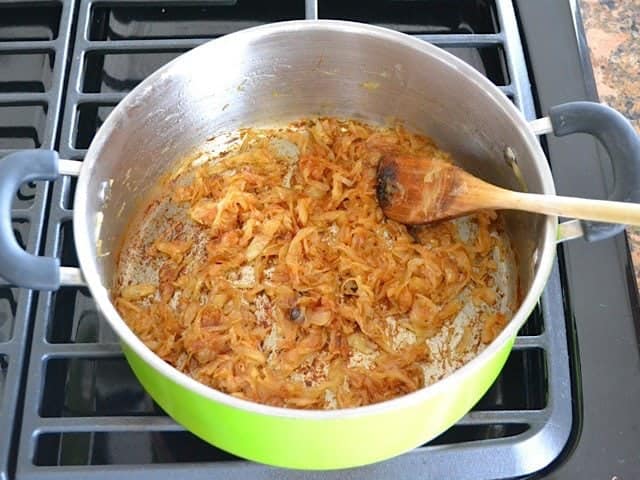 After an hour or so, they should be deep golden brown, sticky, and caramelized. If you don’t like the stringy texture of caramelized onions, you can dice them instead. They will probably cook a little faster when diced and will blend into the pilaf a little better. 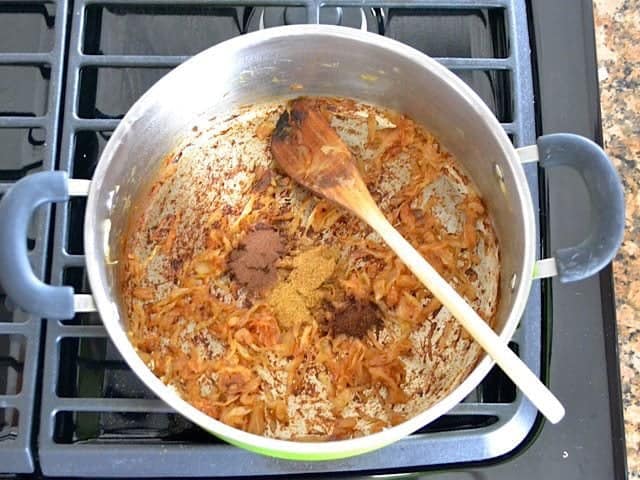 Remove half of the onions and set them aside to top the pilaf later. Add 1 tsp cumin, 1 tsp allspice, and 1/4 tsp ground cloves to the pot. Sauté the spices with the remaining onions for about a minute. This toasts the spices slightly, which enhances their flavor. 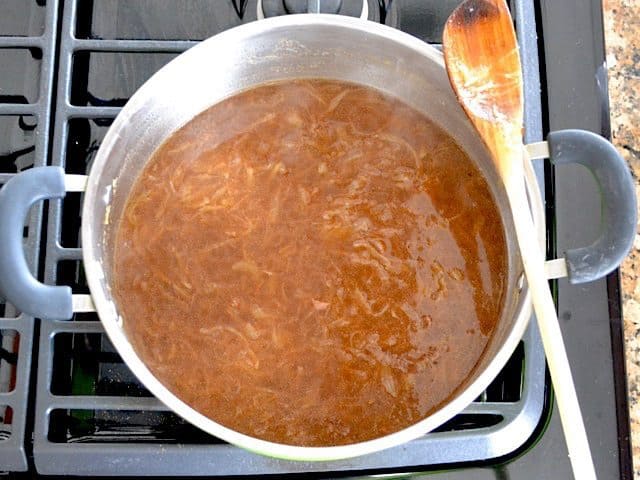 Add 2.5 cups of vegetable broth to the pot and stir to dissolve any browned bits off the bottom. All that browned onion sugar will help give a lot of flavor to the Mujaddara. 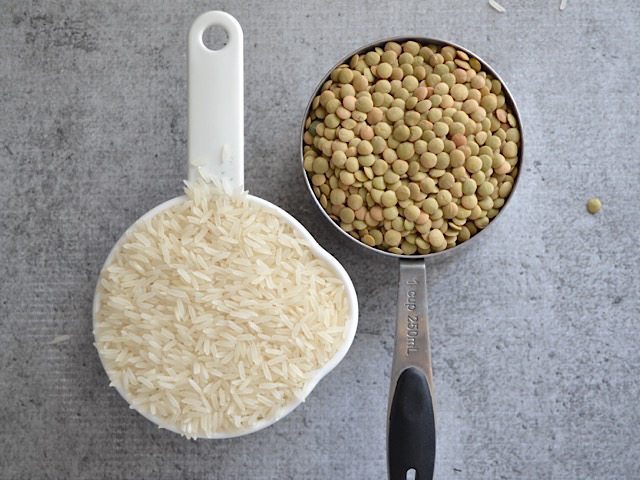 Add one cup of long grain white rice and one cup of brown lentils to the pot. I used jasmine rice because it’s my favorite, but you can use plain white rice, if desired. You’ll want to use brown lentils and not French or “green” lentils, because those take twice as long to cook as brown lentils. If unsure, check the packaging to see the recommended cooking time. It should be 20-30 minutes. 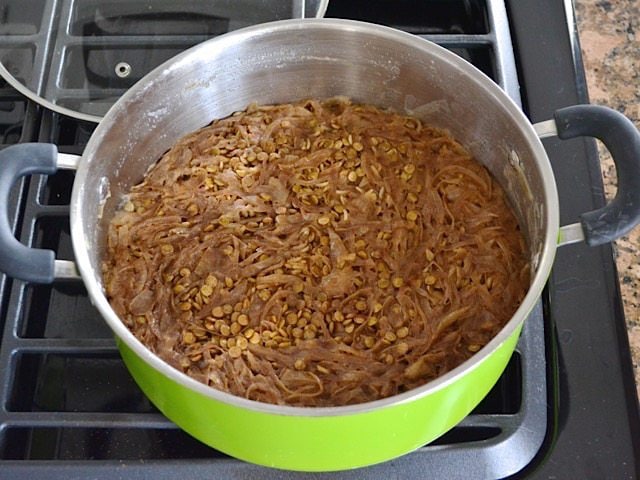 Fluff it up with a spoon or fork (looks more appetizing now, for sure). The rice and lentils should have absorbed all the broth and be soft and tender all the way through. 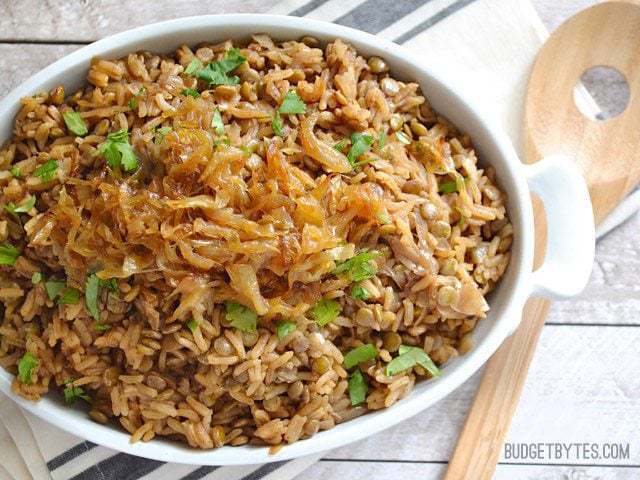 Top the Mujaddara with the reserved caramelized onions and serve! YUM.