There’s nothing quite like fresh pineapple. It’s tangy, sweet, and goes equally as well with savory dishes as it does desserts. And while canned pineapple can work in a pinch for some recipes, fresh pineapple has a far superior flavor and texture. I’ve gotten into the habit of buying up as many pineapple as possible when they’re in season and on sale, and freezing them for later. So, I wanted to teach you how to cut and freeze pineapple, too, so you can take advantage of this amazing fruit, without breaking your budget. 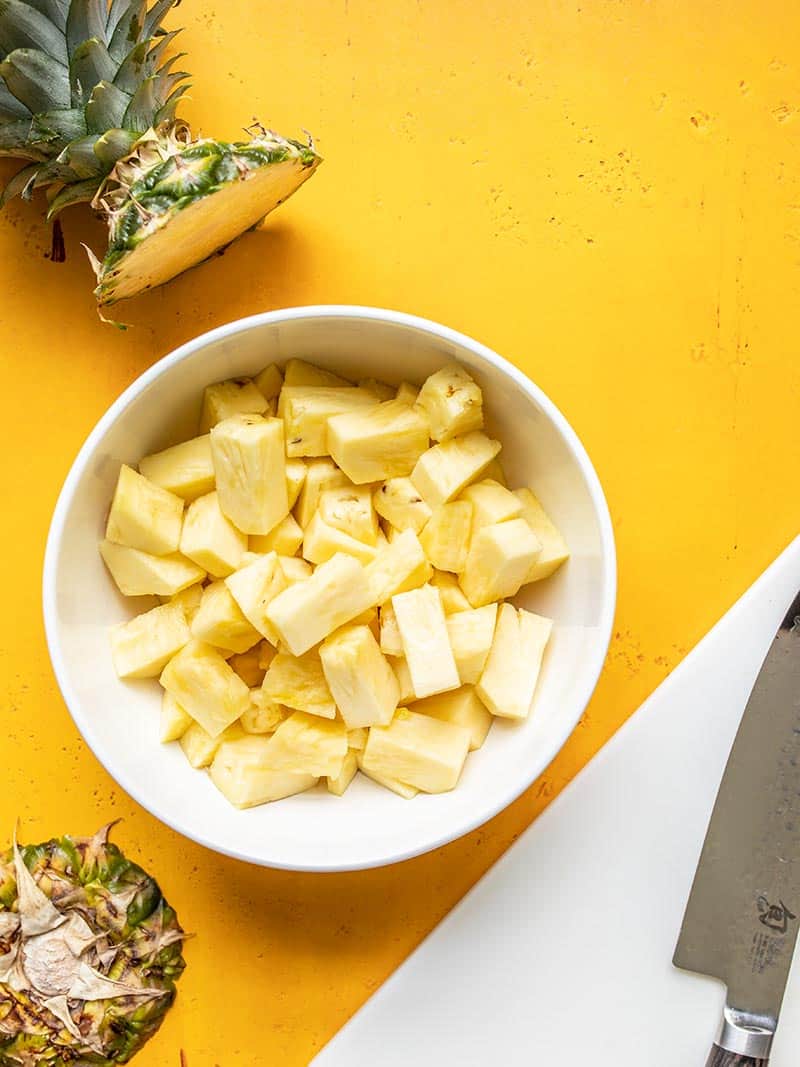 What is a Good Price for Pineapple?

Pineapple has been on sale at Aldi for the past couple of weeks for only $1.49 each, so I’m am taking FULL advantage of it! How do you know if you’re getting a good deal on pineapple? Well, prices do vary from region to region and it will likely always be more expensive in norther regions because it has further to travel, but I consider anything below $2/pineapple to be an exceptional deal.

And make sure you’re always paying attention to whether the pricing is per pound or per item. Pineapples are often 3-4 pounds each, so $1.49/lb. would be quite pricey!

When is Pineapple in Season?

There are several varieties of pineapple grown around the world and they all have different growing seasons, making pineapple available pretty much year round. The most common variety sold in the United States is called the “cayenne” and is in season from late spring through mid-summer, and that’s when I tend to find the best deals.

How Do I Know When Pineapple is Ripe?

Look for pineapples that smell sweet, but not fermented. They should give a little when squeezed, but not be squishy soft. Cayenne pineapples, the most common variety sold in the U.S., start out green and begin to turn golden yellow from the bottom up as they ripen. Like bananas, people prefer different levels of ripeness. I like mine a little on the tart side, when they’re mostly still green with just the bottom 1/4 to 1/2 turning yellow. The spiky leaves of the pineapple should always be green and firm. If they are brown and dried out, the pineapple is probably past its prime.

How to Use Fresh Pineapple

I could go on for days about all the yummy ways to use fresh pineapple! Obviously, it’s great on its own as a snack, but here are a few of my other favorite ways to use pineapple:

How to Cut a Pineapple:

There are several methods for cutting pineapple, but I’ve included step by step instructions for my preferred method. This method can be used to make pineapple chunks or spears, is fast, and easy. I can cut a whole pineapple with this method in about 5 minutes.

Note: Pineapple juice is quite slippery, so please be very mindful of your finger placement at all times while cutting your pineapple. 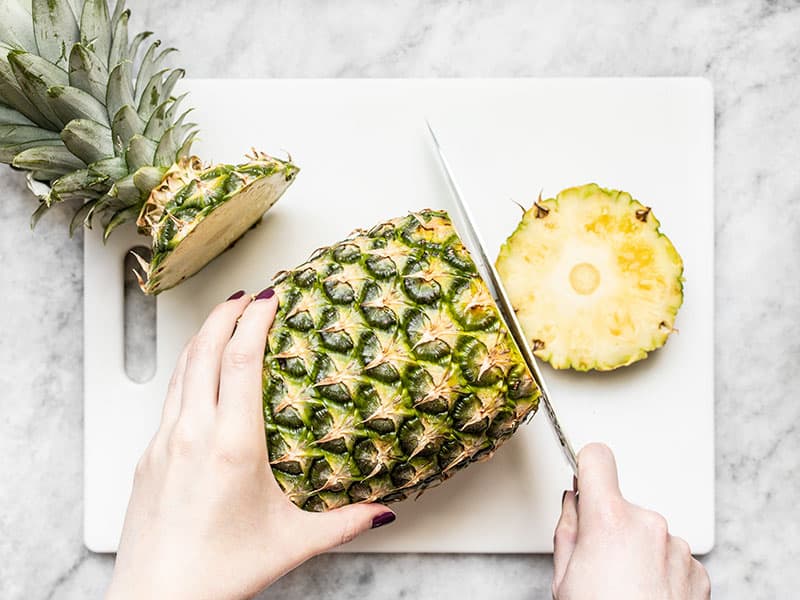 STEP 1: Cut the top and bottom off the pineapple. This not only removes the stem end and leaves, but it gives you a stable, flat base to keep the pineapple stable as you make the rest of the cuts. 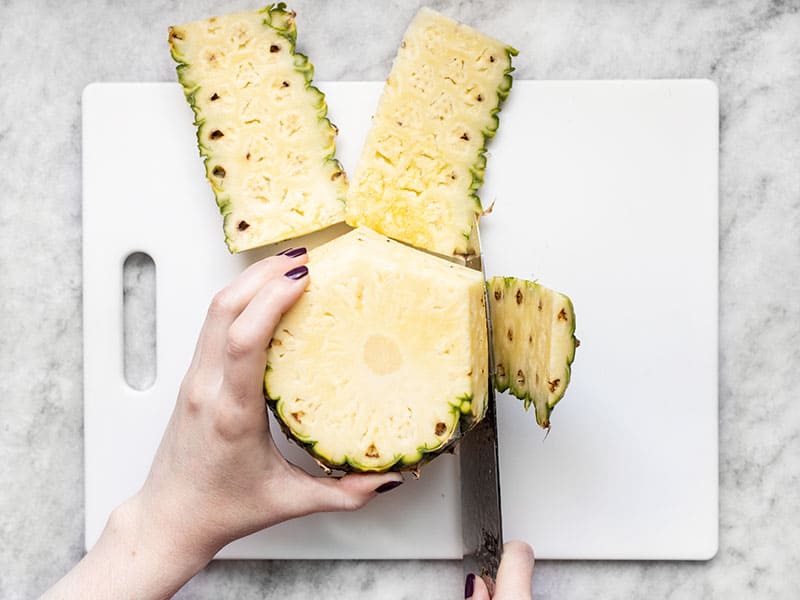 STEP 2: Stand the pineapple on its widest end, and slice off the spiny skin from top down, following the curvature of the pineapple. You’ll need to slice off 1/4 to 1/2-inch deep to get rid of the spines. And don’t worry, if some spines still remain, you can trim them by hand. Avoid cutting too deeply or else you’ll lose too much of the precious pineapple! 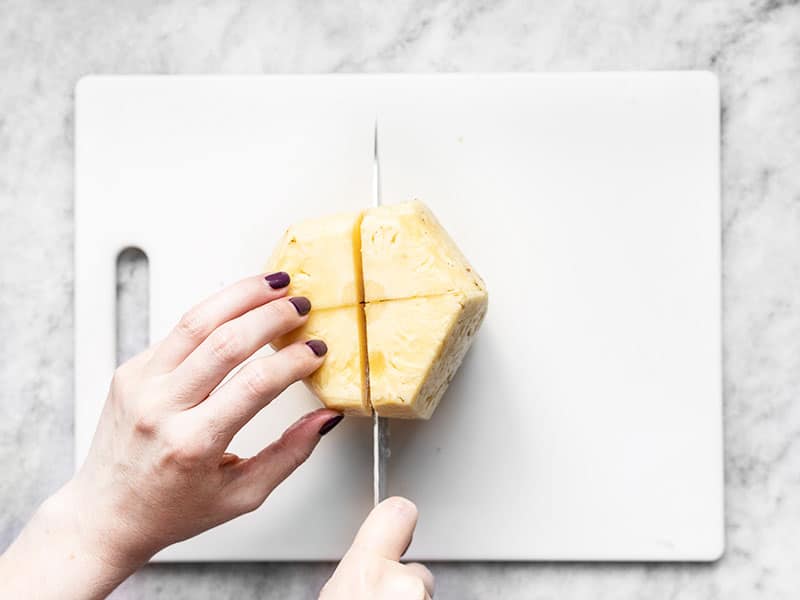 STEP 3: Once the skin has been removed, keep the pineapple standing on end and cut it into quarters lengthwise. Take note of the visible core in the center. You’ll be slicing that off each piece in the next step, so make note of how deep the core extends. 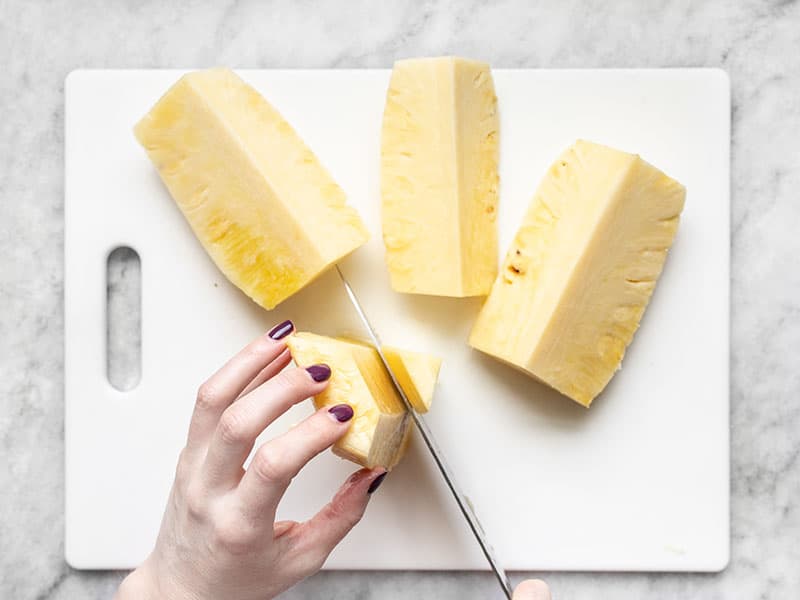 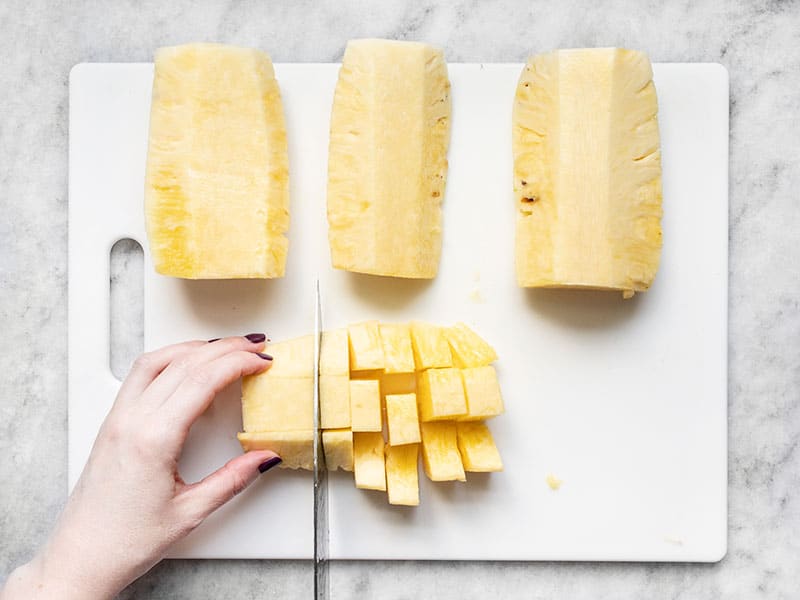 How to Freeze Pineapple:

When I cut a fresh pineapple, I often keep half in the fridge for snacking and freeze the other half for later. Here is my super simple method for freezing fresh pineapple. 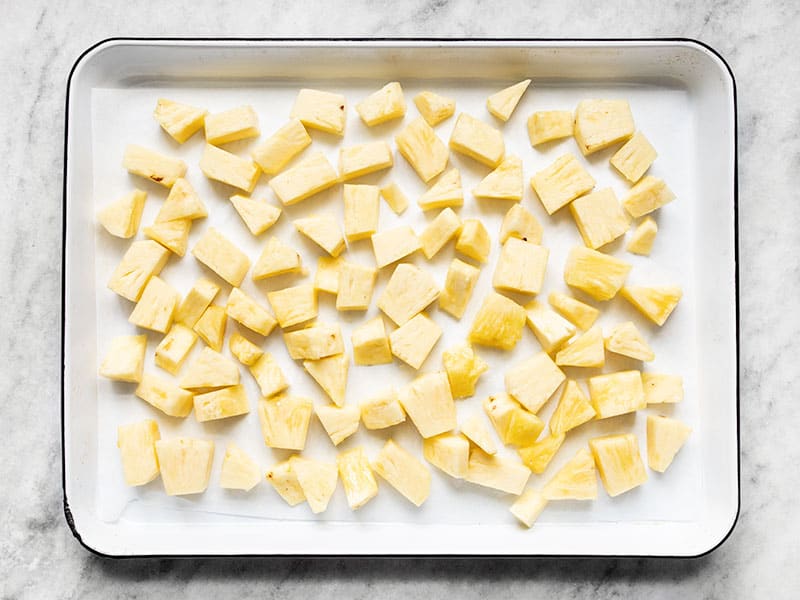 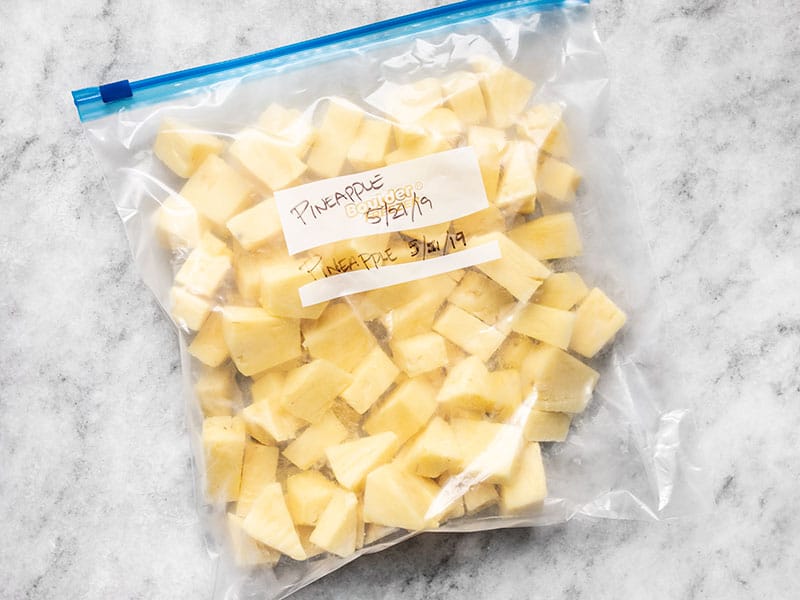 Once the pineapple is frozen solid, transfer them to a large air-tight storage container. Make sure to label and date your frozen pineapple so you don’t forget what it is and when it was frozen! I like to use zip-top freezer bags, but you can freeze in any freezer-safe container. Reusable silicone food storage bags are a great low-waste option.

How Much Does One Pineapple Yield

Pineapples will obviously vary in size, but from my one medium pineapple I got probably about 4-5 cups of pineapple chunks. This is about equal to two store-bought bags of frozen pineapple. All for $1.49! Totally worth the 5 minutes of chopping.

How Long Can You Keep Frozen Pineapple?

I usually try to use up my frozen goods within three months for the best quality, but pineapple in particular holds up extremely well. I just used some pineapple today that I froze ELEVEN MONTHS ago and it was still awesome. It had developed a few ice crystals, but the flavor and texture were still great! If the pineapple begins to look white, dry, or shriveled, that’s when it’s been frozen too long. 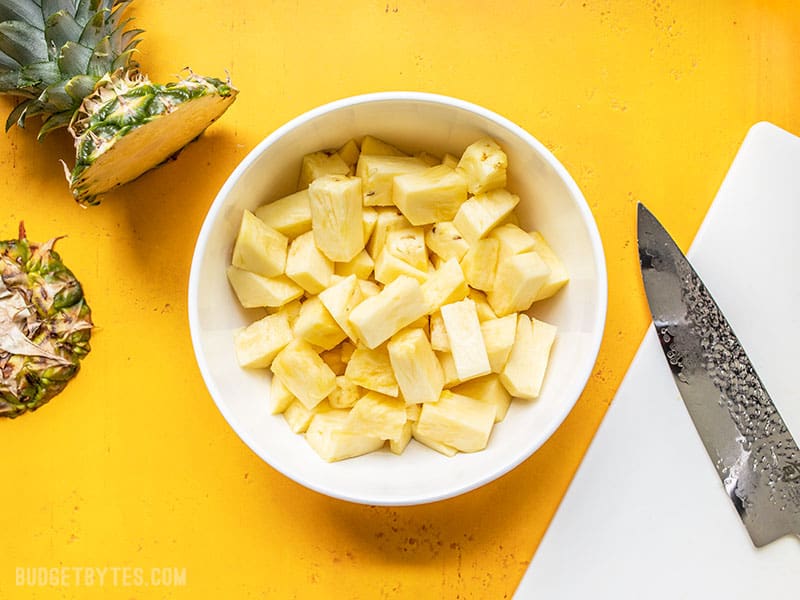 14 comments on “How to Cut and Freeze Pineapple”