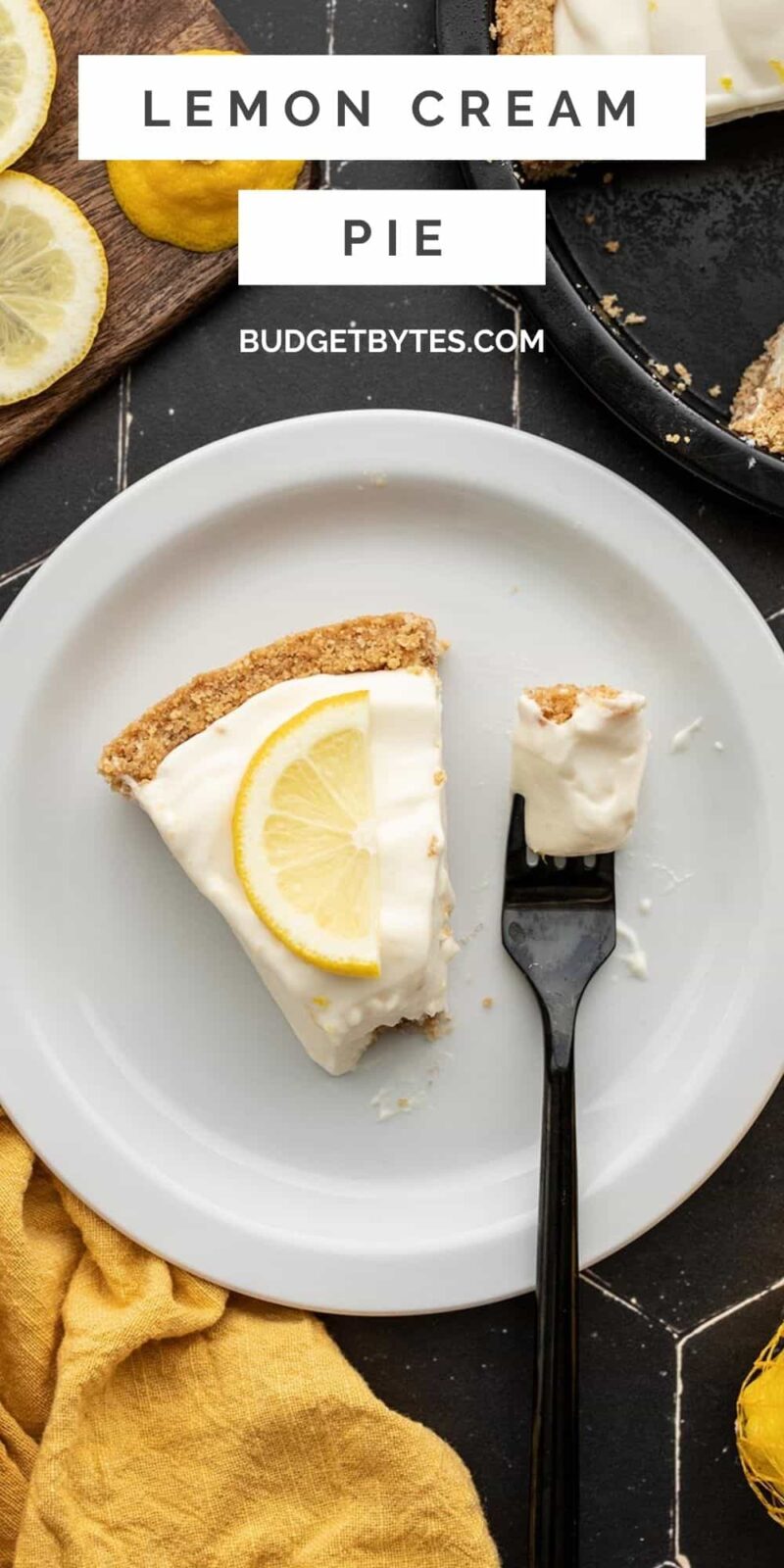 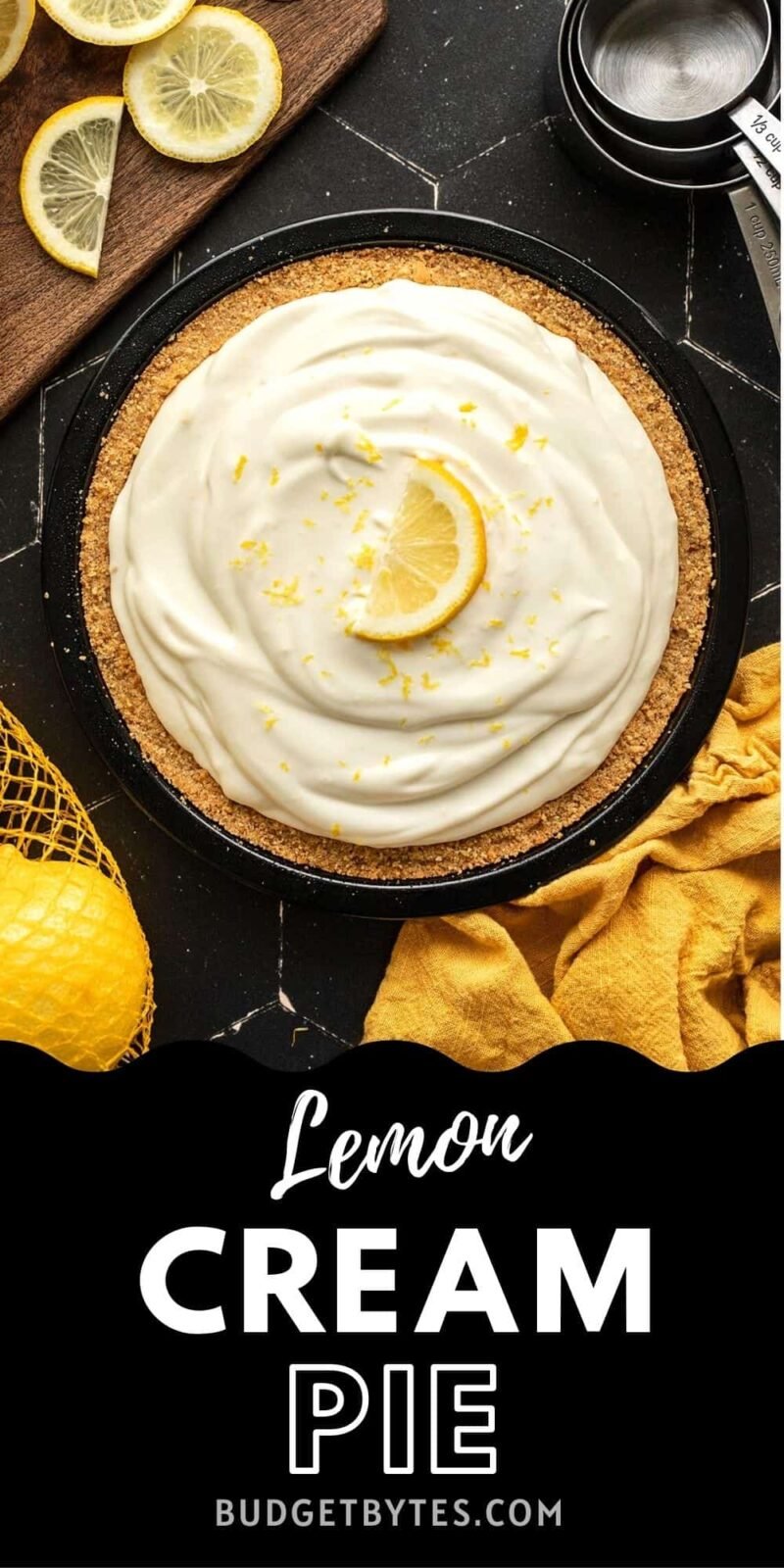 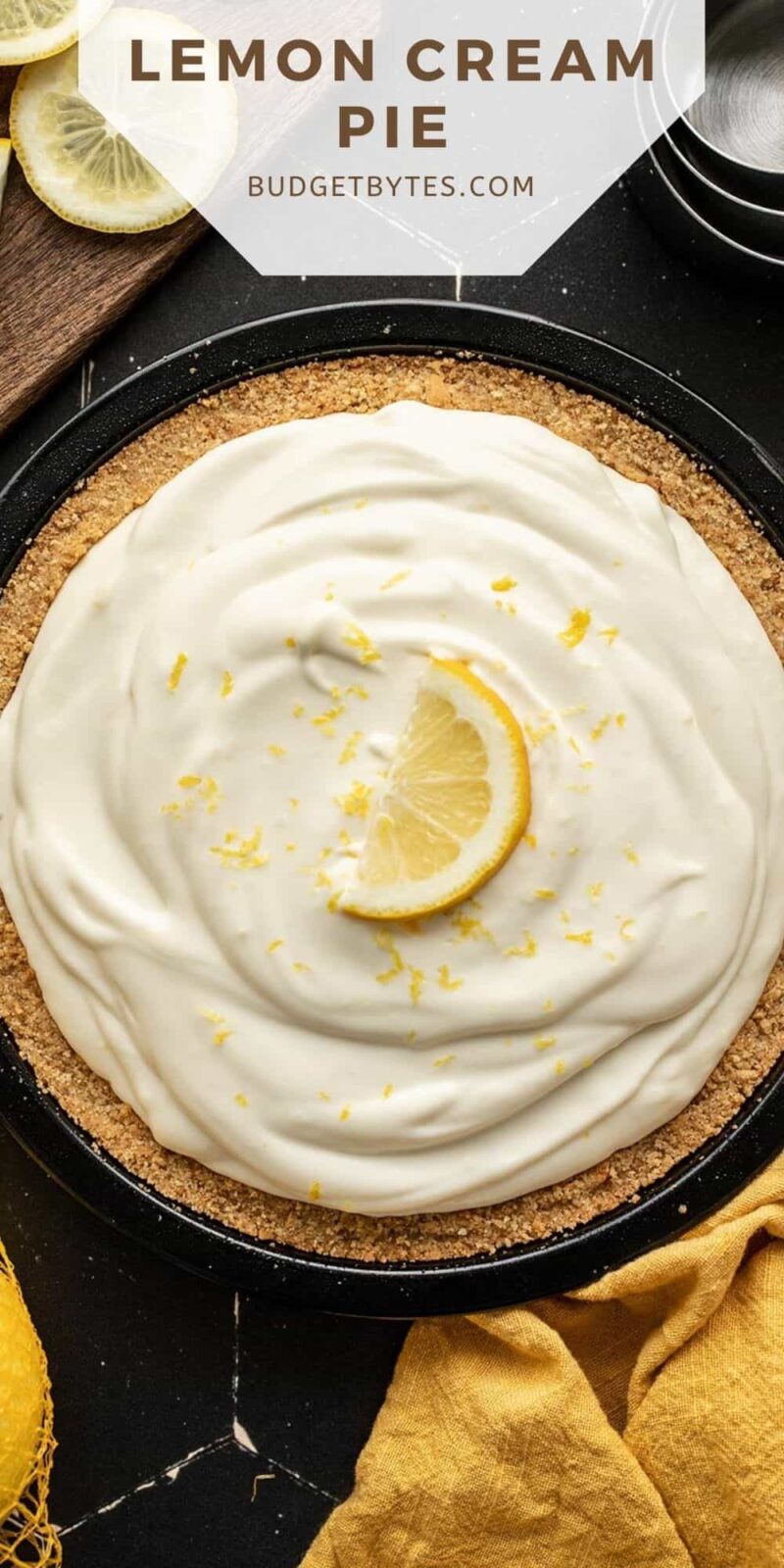 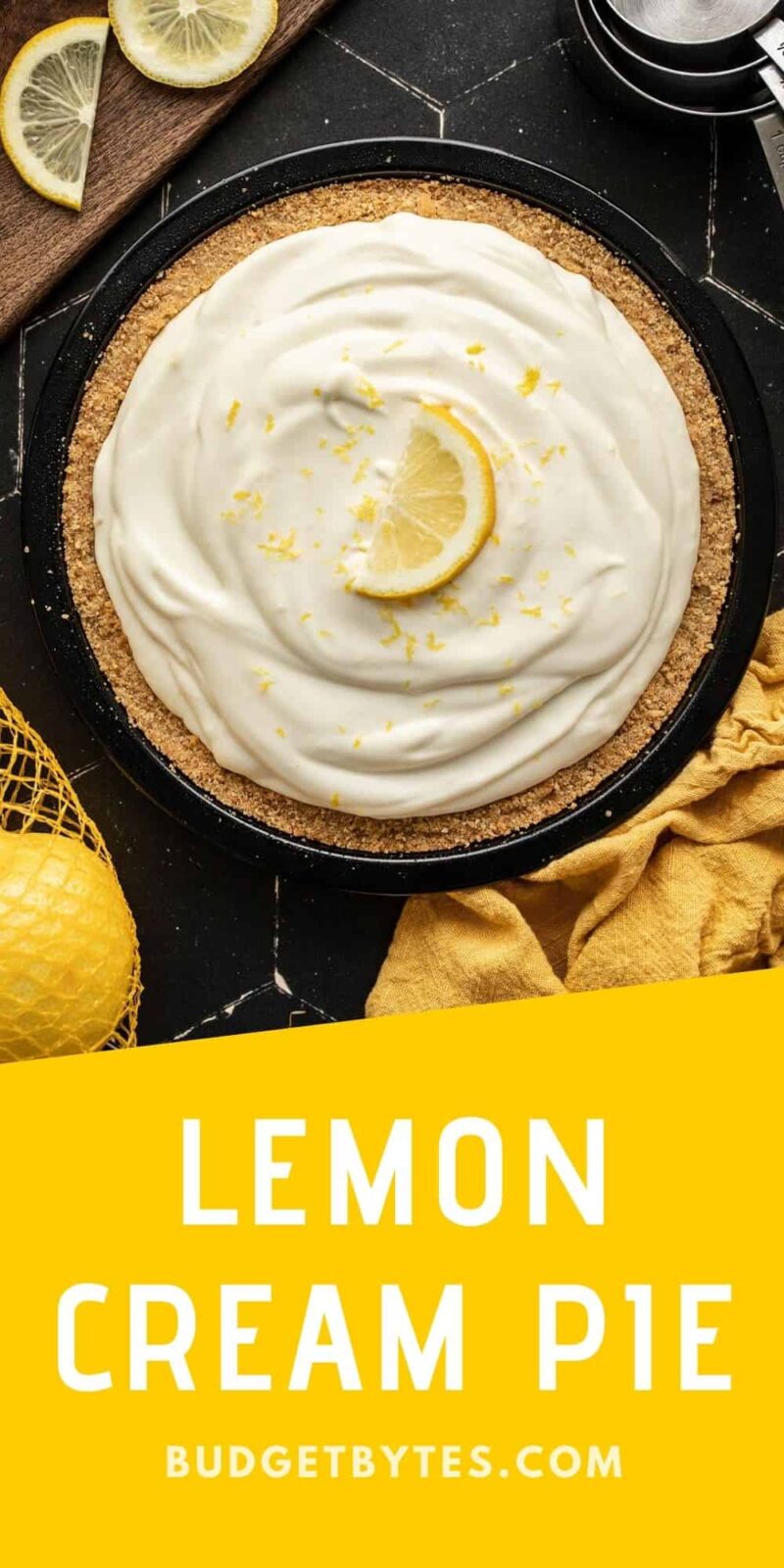 I set out this week to make some no-churn lemon ice cream, but at the last minute, I was like, “I really don’t want to wait for it to freeze…” so I made it into a pie instead. The filling for this super easy Lemon Cream Pie is the same simple combo as no-churn ice cream: sweetened condensed milk + heavy whipping cream + whatever flavors or add-ins you want. It creates a sweet and creamy cloud-like mixture that I could just eat up with a spoon (or in a pie crust 😄).

This simple pie has so many options, so make sure you keep reading to find out a couple of quick ways you can change it up and make it your own.

Graham Cracker Crust – I made a simple pie crust out of vanilla wafers to play on the whole vanilla-lemon theme of the pie, but you can easily use the exact same method with graham crackers instead.

No-Bake – I baked my crust for a brief 10 minutes to make it more solid, but baking is not 100% necessary. You can make the pie completely no-bake if needed, the crust will just be a little more crumbly.

Store-Bought – To make this pie faster and easier, you can use any type of store-bought crust that you like. If it’s a traditional pie crust, you’ll want to pre-bake and cool it before adding the lemon-cream filling. For graham cracker crusts, just fill and refrigerate!

What Kind of Dish to Use

This recipe fills a standard 9-inch pie plate. BUT you can also make this into lemon cream squares by using an 8×8 or 9×9-inch square baking dish instead. If using a square dish, I suggest only pressing the crust into the bottom and not up the sides as you would with a pie plate.

As I mentioned in the introduction, the filling for this pie is actually exactly the same as no-churn ice cream. For that reason, this lemon cream pie is very freezer-friendly. You can eat it frozen, like an ice cream pie, or just store your leftover slices in the freezer (for a couple of months). If you do plan to consume your pie frozen, I suggest skipping the baking step for the crust below because it will be easier to cut when frozen if the crust isn’t quite as solid.

Do I Need to Use Fresh Lemons?

Here are some tips for getting the most juice out of your lemons, because I know they’re not cheap!

Can I Use Prepared Whipped Topping?

Yes, if you don’t want to whip your own heavy cream (it really only takes three minutes with a hand mixer), you can use 2 cups of store-bought whipped topping. But homemade will always taste better. 😉

4.94 from 16 votes
This sweet and creamy cloud-like lemon cream pie is an easy summer dessert that can be made completely no-bake, if needed.
Author: Beth – Budget Bytes 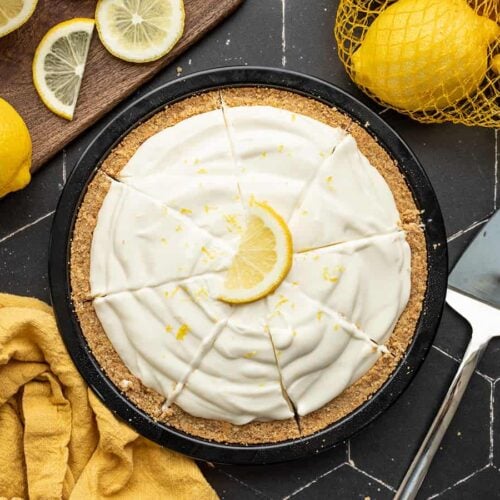 *For a softer crust, just press the filling into the pie plate without baking. You can use either vanilla wafers OR graham crackers for this pie crust. You can use any prepared store-bought crust in place of the crust recipe listed here.

How to Make Lemon Cream Pie – Step by Step Photos

Preheat the oven to 350ºF. You’ll need 1.5 cups of vanilla wafer (or graham cracker) crumbs for the crust. Use either a food processor or a rolling pin to crush the wafers, making sure the crumb is very fine and even. Add 2 Tbsp sugar and 6 Tbsp melted butter.

Stir (or pulse in the food processor) until the butter, sugar, and crumbs are well combined.

Press the crumb mixture into a 9-inch pie plate and use a flat bottomed glass to really compress the mixture. Bake the crust in the preheated oven for 10 minutes (this helps solidify the crust), then transfer to the refrigerator to cool.

Next, zest and juice the lemons. You’ll need ½ cup lemon juice and about 1 Tbsp zest. That’s about 2-3 lemons worth of juice and 1 lemon worth of zest. If you have any leftover lemon that hasn’t been juiced, you can slice it and use it as a garnish for the pie.

Add one 14oz. can of sweetened condensed milk to a bowl and whisk in ½ cup lemon juice, 1 Tbsp lemon zest, and 1 tsp vanilla extract.

Whip 1 cup of heavy whipping cream until it forms stiff peaks. Add ¼ of the lemon and sweetened condensed milk mixture to the whipped cream and gently fold until combined. Repeat adding ¼ of the lemon mixture at a time, until all of it has been folded into the whipped cream. If you need help with the folding technique, here is a video tutorial on how to fold ingredients together.

After all of the lemon mixture has been folded into the whipped cream, it should still be very light, fluffy, and creamy.

Pour the lemon cream filling into the pie crust (I had some extra zest so I added that on top, too). Refrigerate until it’s completely chilled (about 2 hours). You can also freeze it if you want it to be more solid.

Slice the pie into eight pieces and then serve.