I know, I know, I just made a chicken soup-type dish. Well, sometimes you’ve gotta work with what you’ve got. I have a ton of chicken in the freezer, I had some chipotle peppers in adobo sauce left over from another test recipe, and it’s getting all fall-like outside. What does that add up to? Chili, of course.

I went pretty light on the chicken in this recipe to keep costs down (even though I got a crazy-good deal on the chicken) and beefed it up with a couple different types of beans and corn. Most of the flavor in this dish comes courtesy of the sweet-spicy-smokey chipotle peppers in adobo sauce. They definitely have a kick, so start with just two peppers and a couple spoonfuls of sauce, and add more to taste.

The V8 juice was my biggest cost and I could have done better. V8 offers a depth of flavor that plain tomato juice can’t, so I wouldn’t suggest skipping this secret ingredient. Check the bottom shelves of the juice aisle for the large metal cans because they cost less than the resealable plastic jugs. If you have some left over, into the freezer it goes! (makes a great base for soups and cocktails!)

If you can’t get a good deal on chicken like I did, you can easily make this into a vegetarian stew. Just add some diced sweet potato for bulk and you’re good. Although it’s so far from chili at this point that I don’t know if it can go by that name anymore, but who cares, it tastes good. 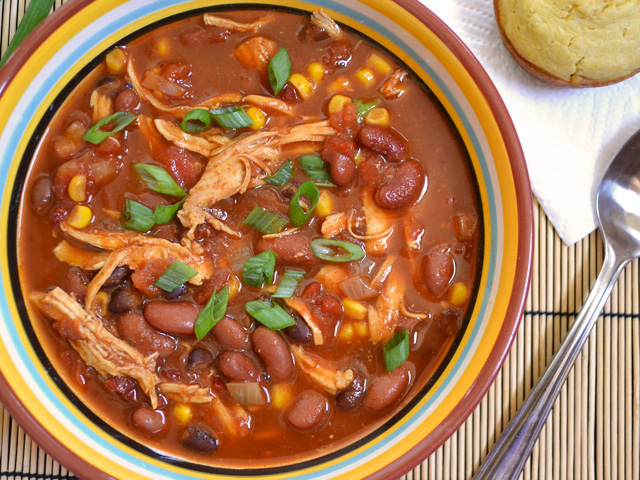 Looking for a classic chili recipe? Check out my Simple Homemade Chili!

5 from 19 votes
This chipotle chicken chili has smoky chipotle peppers, shredded chicken, and hearty beans for a meal that will fill you up and satisfy your taste buds.
Author: Beth - Budget Bytes 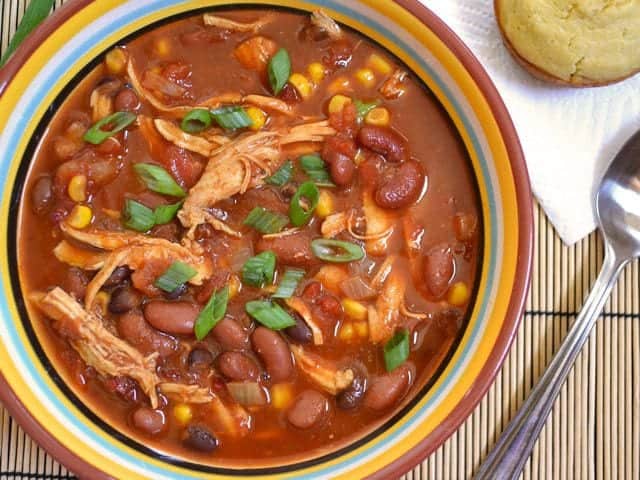 Enjoy! Goes great with cornbread, cheddar cheese, or a dollop of sour cream! 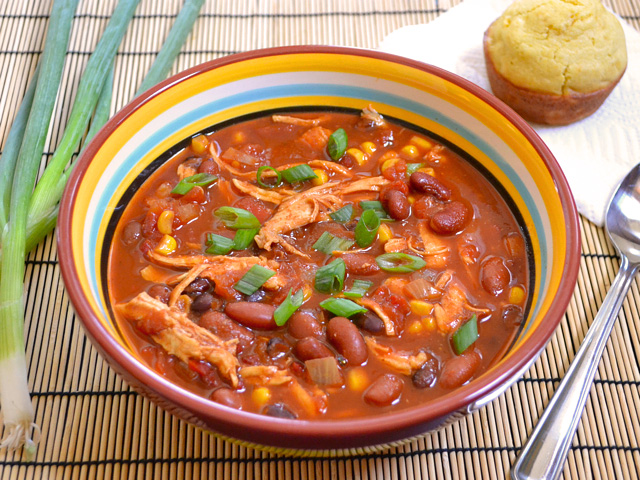 I garnished with green onions because I had them laying around. 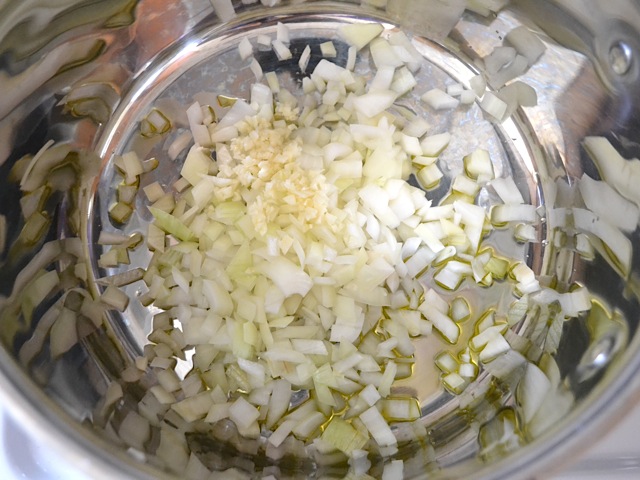 Dice the onion and mince the garlic. Cook both in a large pot with olive oil until tender (about 5 minutes). (I’m not sure why I keep re-taking this picture… I could have just taken one and used it for all 100-million recipes that start this way.) 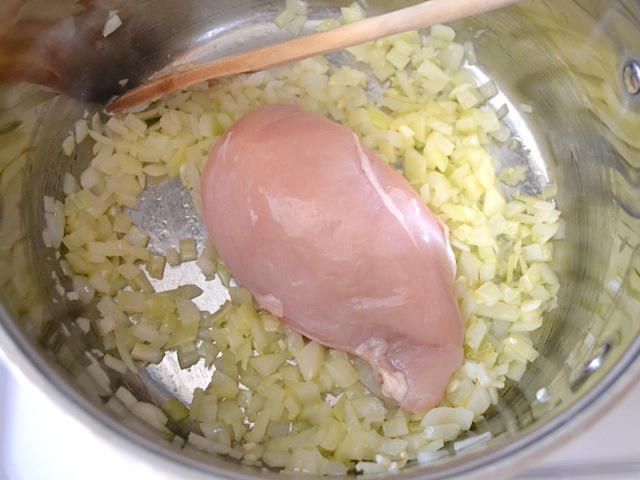 Add the raw chicken breast – whole. It will get shredded later. This recipe is admittingly light on chicken, but I think that’s an okay compromise for price. Plus, you get plenty of protein from the bean/corn combo. 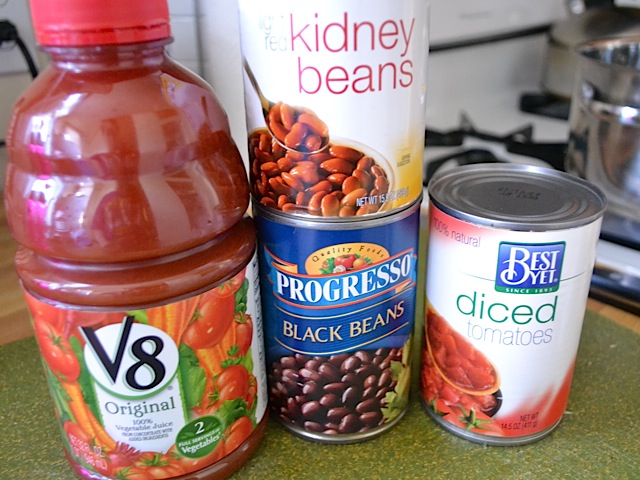 Then add all of this… and one cup of frozen corn. Also, I drained the beans so that I wouldn’t have too much liquid in my chili. 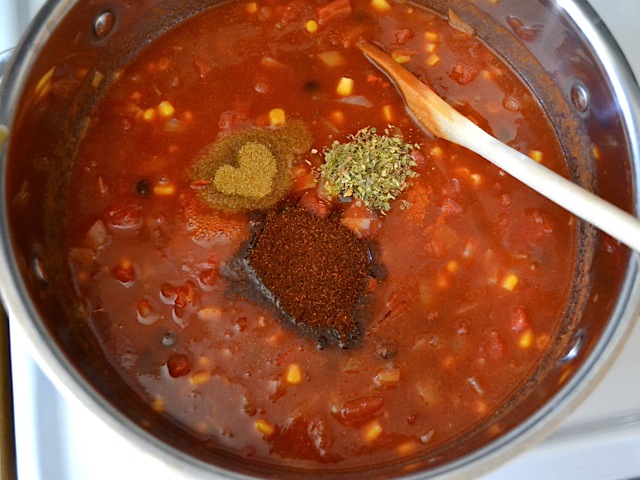 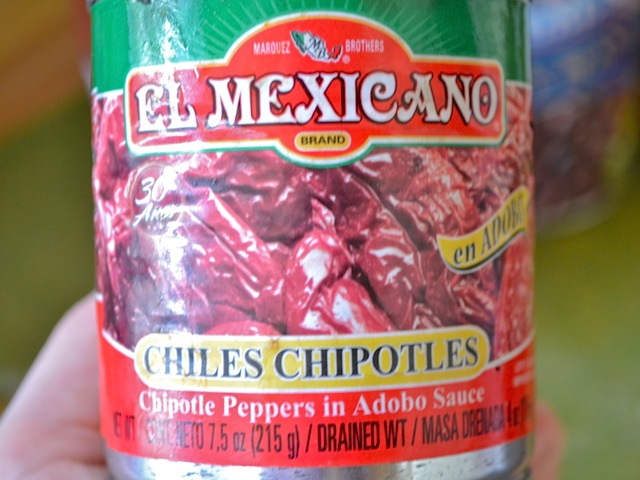 And this is what the chipotle peppers in adobo sauce looks like. It’s a very small can (4 ounces) and is usually sold with the other Mexican grocery items. It’s easy to miss because it looks a lot like the small cans of sliced jalapeno peppers. Make sure to get the kind that is “in adobo sauce.” 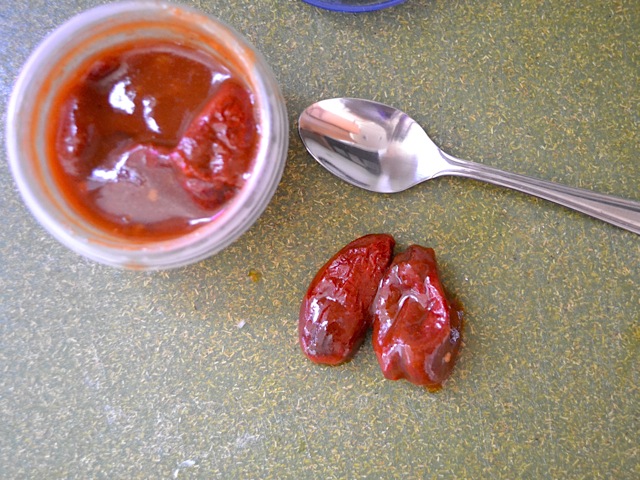 When you open up the can, there are little peppers in there like this, plus a bunch of yummy sauce. (I had left overs from a can in a plastic container in my fridge). Anyway, mince up the peppers and spoon some of the sauce into the pot as well. Start with just two peppers and add more later if you want. I ended up using about half of a can. 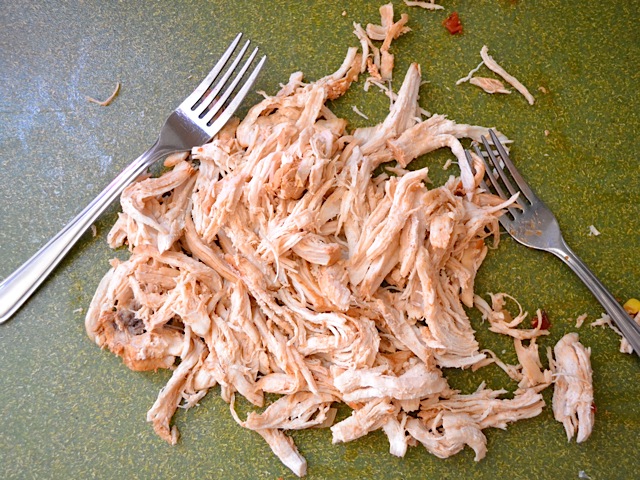 So, bring the pot up to a boil and then reduce the heat to low and let it simmer with a lid on for an hour. This will make the chicken nice and tender. Take the chicken out and shred it with a fork, then return it to the pot. 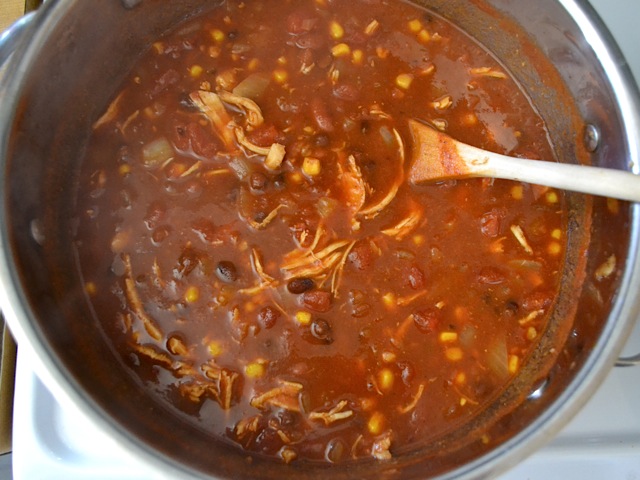 And then you’re pretty much done! Add more chipotles and some salt if desired. I added about a teaspoon of salt and ended up using about half of the can of chipotle peppers (plus sauce). 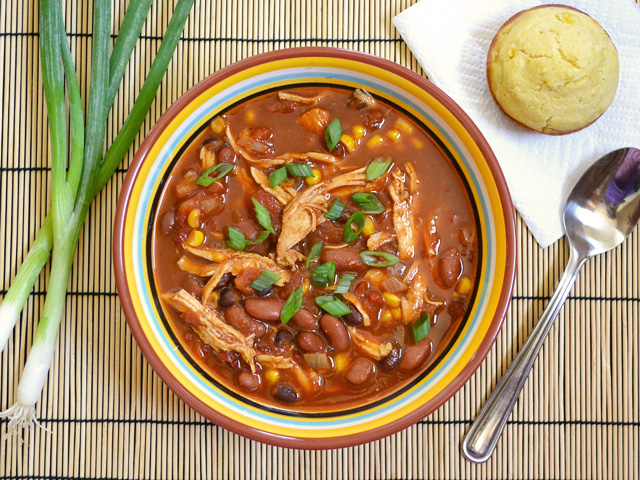 Serve with some cornbread to soak up the chipotle goodness!