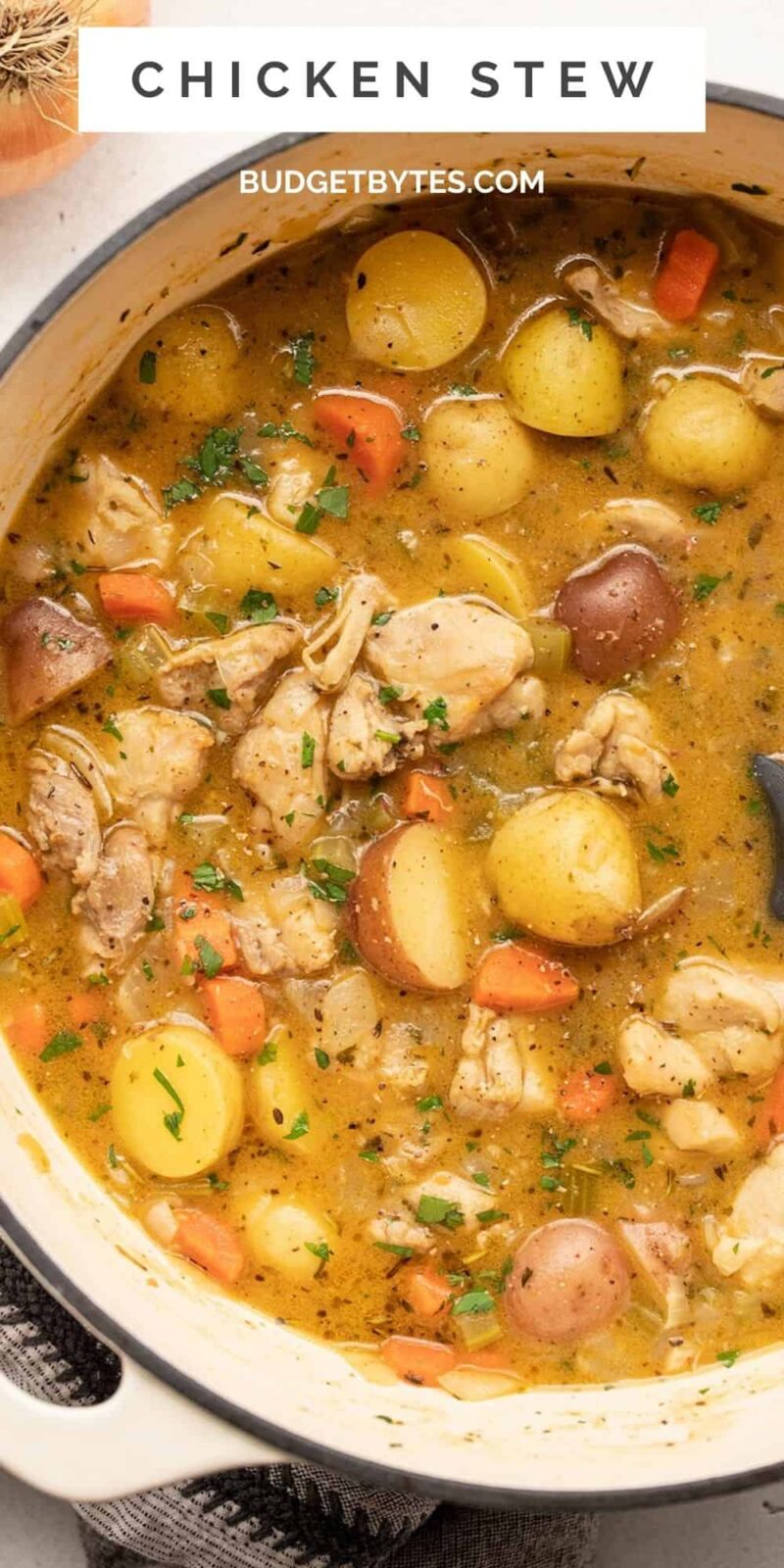 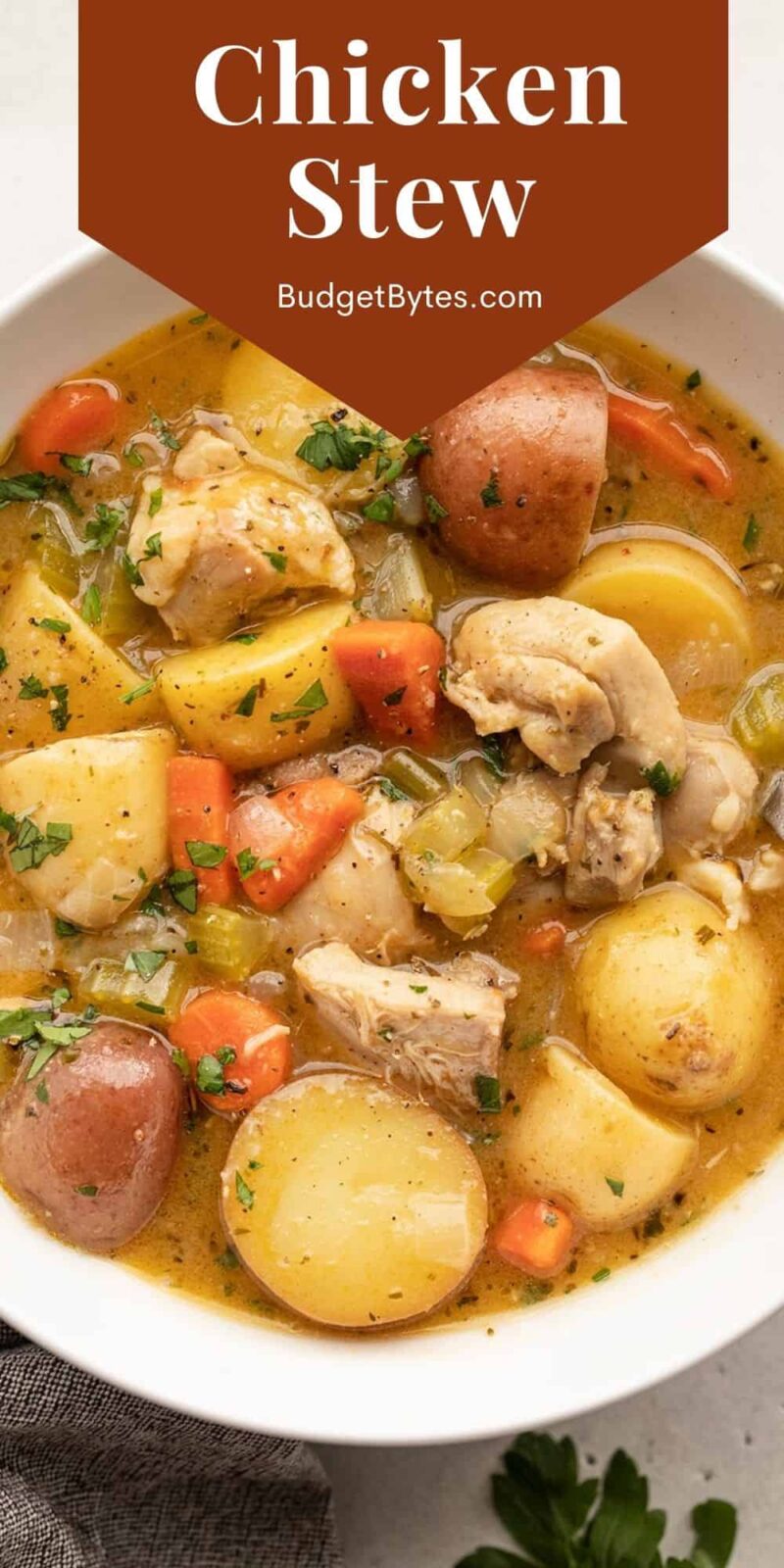 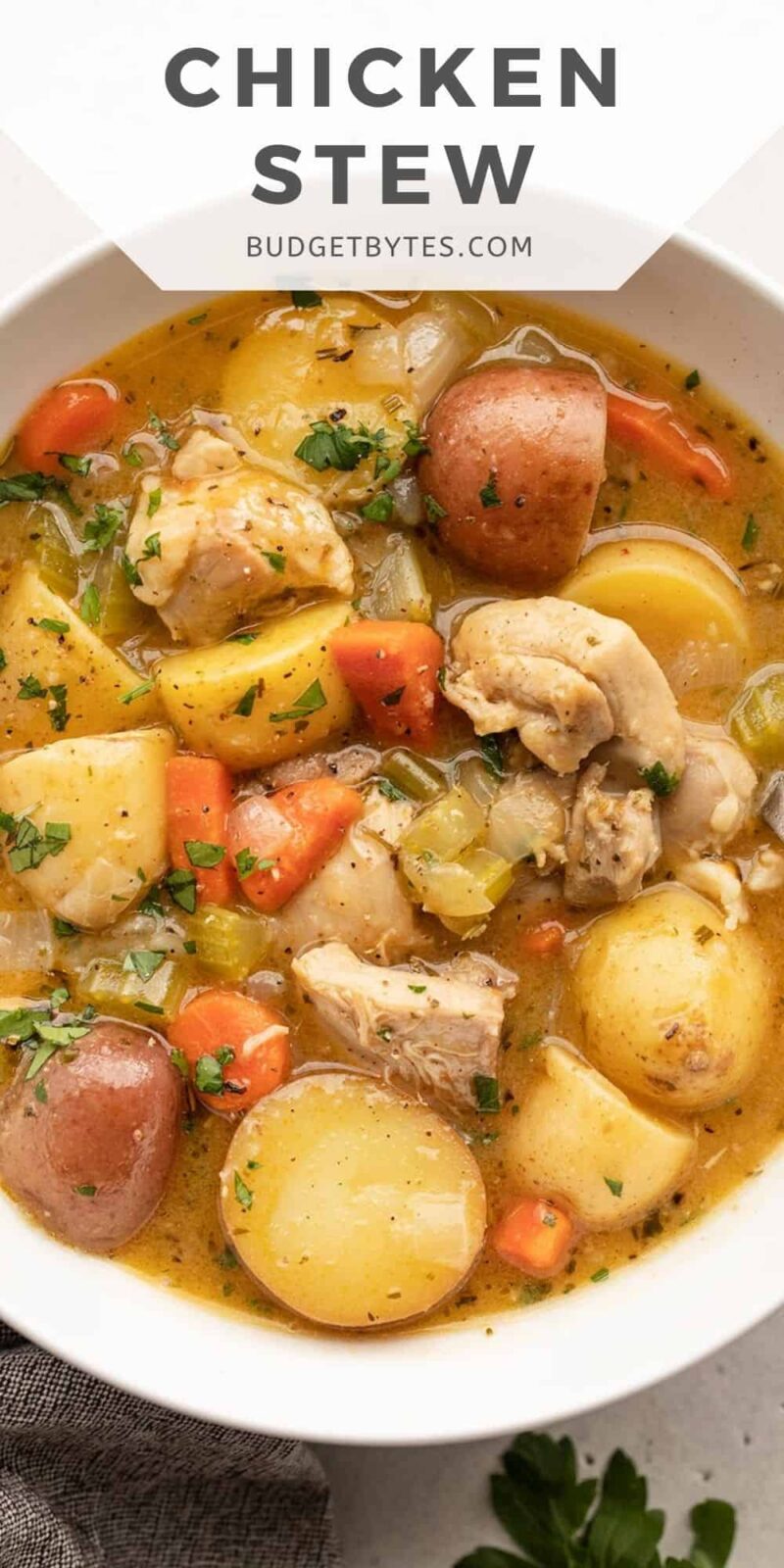 Okay guys, this chicken stew is definitely at the top of my list for my favorite recipe of 2021! It’s thicker and heartier than chicken soup, but lighter than a beef stew. The flavor is absolutely on point and it’s just one of those things that I could happily eat for three meals per day and still love it. In other words, you have to try this chicken stew!

What is Chicken Stew?

Chicken stew is like chicken soup‘s older cousin that is a little rough around the edges. It’s a little more rustic with a rich, thickened broth that has an almost gravy-like consistency. It’s packed full of vegetables and is a true meal in a bowl. Oh, and you’ll definitely want some crusty bread for sopping up all that delicious gravy!

For Best Results, Use Chicken Thighs

Look, I know some people really don’t like dark meat, but that those tender chicken thighs really take this dish to the next level. I strongly advise against using chicken breast, but if you must, opt for a bone-in chicken breast for a little more flavor, then just shred and remove the bones after the stew simmers.

You really want to use a good quality, flavorful broth for this chicken stew. I used Better Than Bouillon to make my broth because it’s my favorite and it tends to be very flavorful. I also used a combination of two types of broth, chicken and vegetable, which I really think adds to the complexity of the flavor and helps deepen the color of the broth.

I used small baby potatoes for my chicken stew, but if those aren’t available you can substitute red potatoes or Yukon gold potatoes in their place. Just cut the potatoes into 1-inch cubes so they cook in about the same amount of time as my baby potatoes.

4.93 from 93 votes
This chicken stew is a rich and hearty mix of tender chicken thighs, vegetables, and a light but flavorful herb-infused gravy.
Author: Beth – Budget Bytes 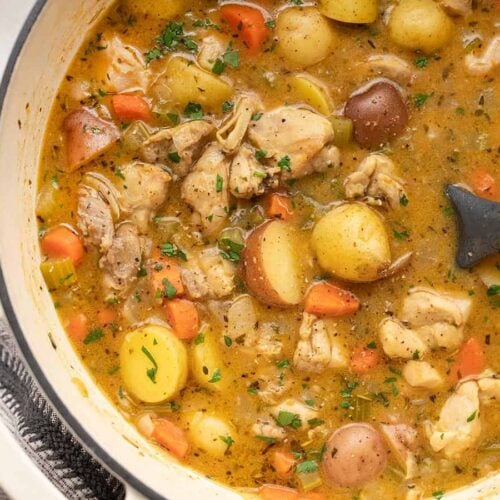 How to Make Chicken Stew – Step by Step Photos

Chop about 1.5 lbs. potatoes into 1-inch pieces. I used baby potatoes, so they only needed to be cut in half.

Add 2 Tbsp butter and 1 Tbsp olive oil to a large pot. Heat the butter and oil over medium until they are hot and sizzling. Add the chicken thigh pieces and let them cook until browned on all sides (the chicken does not need to be cooked through, just browned on the outside). Avoid stirring too often, as that will prevent browning. You want the flour to brown a bit on the bottom of the pot. Remove the browned chicken to a clean plate or bowl.

Add the onion, carrot, celery, and garlic to the pot after removing the chicken. Continue to sauté over medium for about 5 minutes, allowing the moisture released by the vegetables to dissolve some of the browned bits from the bottom of the pot.

Once the vegetables are slightly softened, add 2 more tablespoons of all-purpose flour. Continue to sauté for about 2 minutes more. The flour will again begin to coat the bottom of the pot.

Stir everything to combine and dissolve any flour off the bottom of the pot.

Place a lid on the pot, turn the heat up to medium-high, and allow it to come up to a boil. Once boiling, remove the lid and turn the heat down to medium-low. Allow the stew to simmer over medium-low, stirring occasionally, for about 30 minutes, or until the potatoes are tender and the broth has thickened.

Give the stew a taste and add salt, if needed (I did not add any, but this will largely depend on the salt content of the broth you used). Add some freshly chopped parsley, if desired.

Don’t forget to make some crusty homemade bread to dip in that amazing stew!